Kilwa, another Unesco World Heritage Site in Tanzania hardly anybody has heard of… Tanzania is one of the leading countries in Africa with seven sites, and we have now been to all of them, some of them even several times. 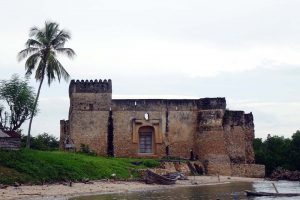 one of the ruins at Kilwa Kisiwani

There is one mixed cultural and natural world heritage site in Tanzania:

There are three natural sites:

And there are three cultural sites:

Two of these sites are listed as ‘in danger’ by Unesco: the Kilwa ruins and the Selous, the first because of continued deterioration of the buildings due to natural and human influences, the latter because of the increasing amount of poaching, and now the building of a hydro dam across Stiegler’s Gorge (one of the most important rivers in the eco-system of the Selous, as well as being extremely important further downstream for the whalesharks around Mafia).

The last one of the seven sites for us left to visit were the ruins at Kilwa Kisiwani and Songo Mnara, it had been on our list of places to explore for a while. There were a few reasons we had not been there yet. It’s a reasonable drive down, so you need at a minimum a three-day weekend. And we knew there was good diving possible in the area, so we wanted to combine a trip to the ruins with some diving too. But therein lay the issue, there is no dive centre in Kilwa, so going diving there is not easy (no dive centre means there is no place to rent equipment, no dive boat, no compressor to fill tanks with air, …).

We decided to enquire with our fellow dive buddies from the Dar es Salaam Yacht Club dive section to see if there were others interested in diving in Kilwa, and to see if we could get permission to rent the gear we needed to dive in Kilwa form the club. Luckily there were others interested, and the dive section generously agreed to rent the equipment to us.

And that’s how Jude ended up sweating buckets at the dive section on a hot and humid Thursday afternoon, loading the tanks and other equipment into the back of two cars with the help of Rob and Richard. Seven people were travelling south the next morning and we needed 16 tanks (to allow us to do three dives each, plus have one spare), some wetsuites, bcd’s, regulators and a buoy from the dive shack for the five divers – Fin, Jane, Jude, Richard and Rob.

The drive down was very pleasant, helped enormously by the fact both cars had green licence plates (that’s code for having diplomatic plates here in Tanzania, which means the police don’t bother you for tea-money…). Rob and Jane had made several cakes for the long weekend, and the mid-way snack was delicious.

Five hours later we arrived at our beach-side destination in Kilwa Masoko, Kimbilio Lodge. It’s a lovely, basic lodge, run by an Italian lady called Betty. The food however was anything but basic, it was sensational. From the first lunch immediately after we arrived, we had amazing meals, always based on what was caught that day straight from the ocean (not by us!), different every time. We enjoyed meal times very much. 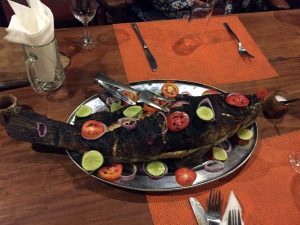 this huge fish was a treat at one of the dinners 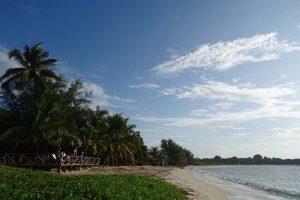 Betty looking out over the bay from Kimbilio Lodge 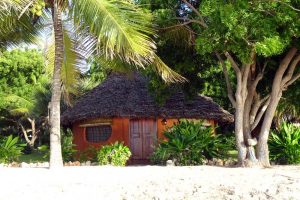 our home away from home, a small banda right next to the beach

The first afternoon we relaxed, organised a boat for the next day and discussed the possible dive sites we could explore. Jamal would join us, as he was the dive master when the dive centre at Kimbilio was still running. The sea was rough getting out through the channel, and we decided to abort our first dive site and try our planned second one – Mkoko Moja. It was pretty tricky to get in from a violently rocking fishing boat, but somehow we managed and we quickly started our descent to get out of the waves crashing around us. The first few metres down the visibility wasn’t great, but then we hit the bottom around 20m and it was fine, we had found the wall, and more importantly, our first giant moray eel and some cleaning shrimps were right there on a small bommie. We wouldn’t find any others, but we didn’t know that yet. Visibility varied, but was mostly good. Jane and Fin went up first, Jamal, Richard, Rob and Jude lasted just over an hour with their air and surfaced a little later. Getting four people back in the boat in the surf wasn’t easy and Moody, our captain, was worried about not being in control during the time the engines were off to get us all back in. 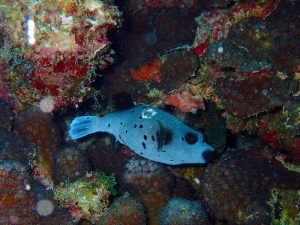 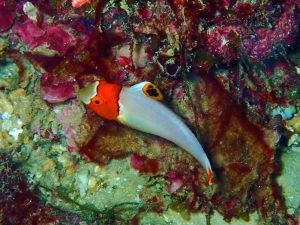 We cruised to a more sheltered site, hoping we could do our second dive there, but when we arrived we realised the visibility was so poor we couldn’t even see the bottom in three metres of water! We cancelled that dive and went back to Jon and Anne who were waiting for us for lunch at the lodge.

In the afternoon we visited Kilwa Kisiwani with Athman, our excellent bird-spotter and guide, and learned about the fascinating history of the crumbling, but impressive, buildings. 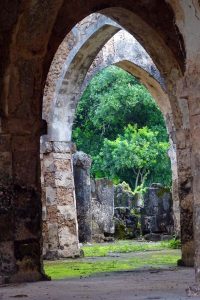 stunning contrasts with the green trees 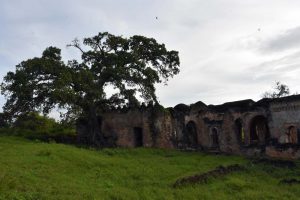 a beautiful old mosque, now exposed to the elements 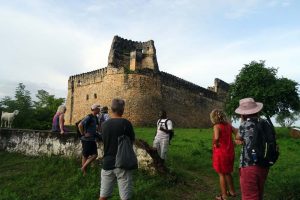 the goats, Jane, Jon, Rob, Fin, Anne and Richard listening to the stories from Athman at Kilwa Kisimani 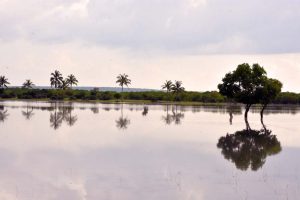 the island not only has beautiful ruins, the vistas aren’t bad either

The next morning it was Easter and of course there was the traditional chocolate egg hunt! Jude had brought chocolate eggs from Holland, and together with Jon they were hidden for the others to find before we sat down for breakfast. It didn’t take long before they were all found, and we decided to keep them until after dinner with our night-caps. 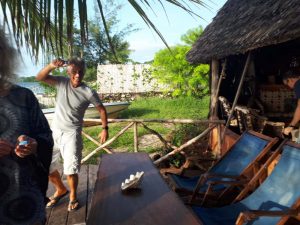 Fin found one! (and Jane can be seen with her haul, Richard seems to be looking hard for another one too) – photo thanks to Jane Miller

Rob, Richard, Fin and Jude hopped on board the fishing boat again. They were off for their second dive, starting where we finished the day before as the visibility had been excellent there. And it didn’t disappoint, we had a great dive, lasting more than an hour again, and we found the massive drop going straight down to 200m. A great variety of underwater wildlife was found this time, including some new nudibranchs for Jude so she was happy. 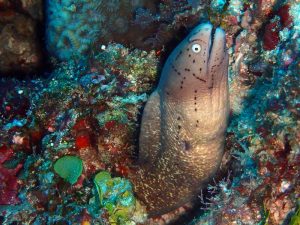 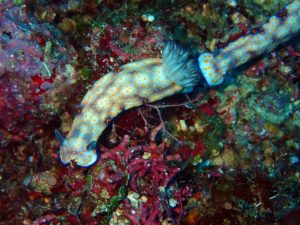 this nudibranch is aptly named beautiful risbecia, it looks like it was mating time 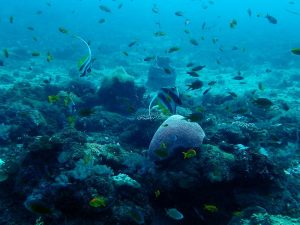 the second dive ended in this aquarium, fish everywhere

Back at the lodge we picked up Jon and Jane, Anne stayed behind, before heading to the second dive site of the day where snorkelling was also possible. This was not a great dive, nor a great snorkelling site, visibility was poor and there was a strong current with the incoming tide. Half an hour later we were already back where we started and we surfaced, finding the snorkelers already back in the boat too. Munching on our packed lunches we moved on to Songo Mnara, the second island with more ruins.

Athman was our guide again, and he led us around the various sites. There are some very impressive buildings here, all crumbling and covered in moss or grass. We enjoyed seeing the ruins, but not the mozzies (muggen) who were out to get us in plague proportions! We each received a branch from Athman to swat at the buggers, but many of us had plenty of bites 🙁 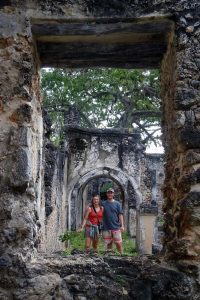 Jude and Jon in the palace at Songo Mnara, with branch to swat at all the mozzies

But we didn’t let that stop us seeing the ruins, our guides’ knowledge of the sites was excellent and he kept us all interested with his stories. There weren’t as many birds around today, so we focused a little more on the ancient buildings. 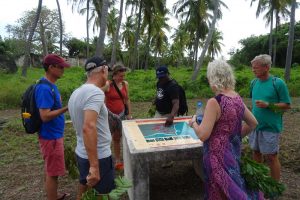 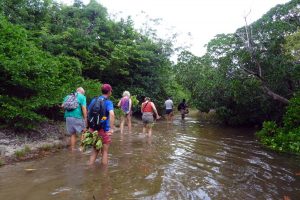 to see the final ruin (a watch tower) on Songo Mnara , we had to walk a section of the trail through the mangroves which flood at high tide

After dinner we sat in the bar area, sheltered from the wind, and tucked into the Easter eggs. Delicious. The next day it was time to head back to Dar. We took our time eating a late breakfast, and then packed up all the gear into the two cars again. It was a relaxed drive home, the police wanted to stop us a few times, but of course as soon as we were close enough and they could see the licence plate, they would wave us through. It works every time. We were back in record time in Dar, dropped off the gear at the dive shack, picked up our car and then went home. We had to unpack, and re-pack before heading straight to the airport for our trip to Arusha. Jon had government meetings planned for the week, and Jude was meeting Brett, Christie, Baylor, Harper and Cohen to join Brett on some recces for the K2N race. 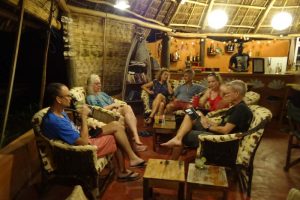 We were very happy we went to Kilwa, it is a shame the police make it hard to get down there in good time for normal cars, as it would be a great place for long (3-day) weekends. It definitely deserves more people visiting it and checking out the ruins. Go and visit if you haven’t been there yet! 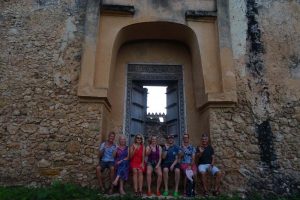 Confusingly there are three Kilwa’s in the area. Kilwa Masoko (Kilwa of the Market) is the current sleepy coastal town next to Jimbizi Beach where most of the tourist accommodation can be found. Then there is also Kilwa Kivinji (Kilwa of the Casuarina Trees) a little further north on the coast. But the ruins are located on the island opposite our lodge (Kimbilio Lodge) and called Kilwa Kisiwani (Kilwa of the Island).

Kimbilio Lodge is a great place to stay, basic round huts with mosquito nets around the beds, fans and your own bathroom. The food however is sensational, and for the food alone we can recommend it.