Poor Jon needs to go to Tanzania for work every 2 months, and after a few trips on his own we decided to go together this time and add on a weekend trip to Zanzibar. He normally only spends Tuesday, Wednesday and Thursday’s there, but this time for some reason we already left on Monday morning, so we had a full week in Tanzania.

Travelling in Africa is typically not quite as smooth as Europe or Australia. You have to leave lots of extra time in case of traffic getting to the airport. The airports themselves must have hired consultants to develop such inefficient check-in processes and they have the most sensitive metal detectors in the world. That said, they have not lost our luggage (yet) and we had stunning views of Mt Kilimanjaro on our way down, which kind of compensated. 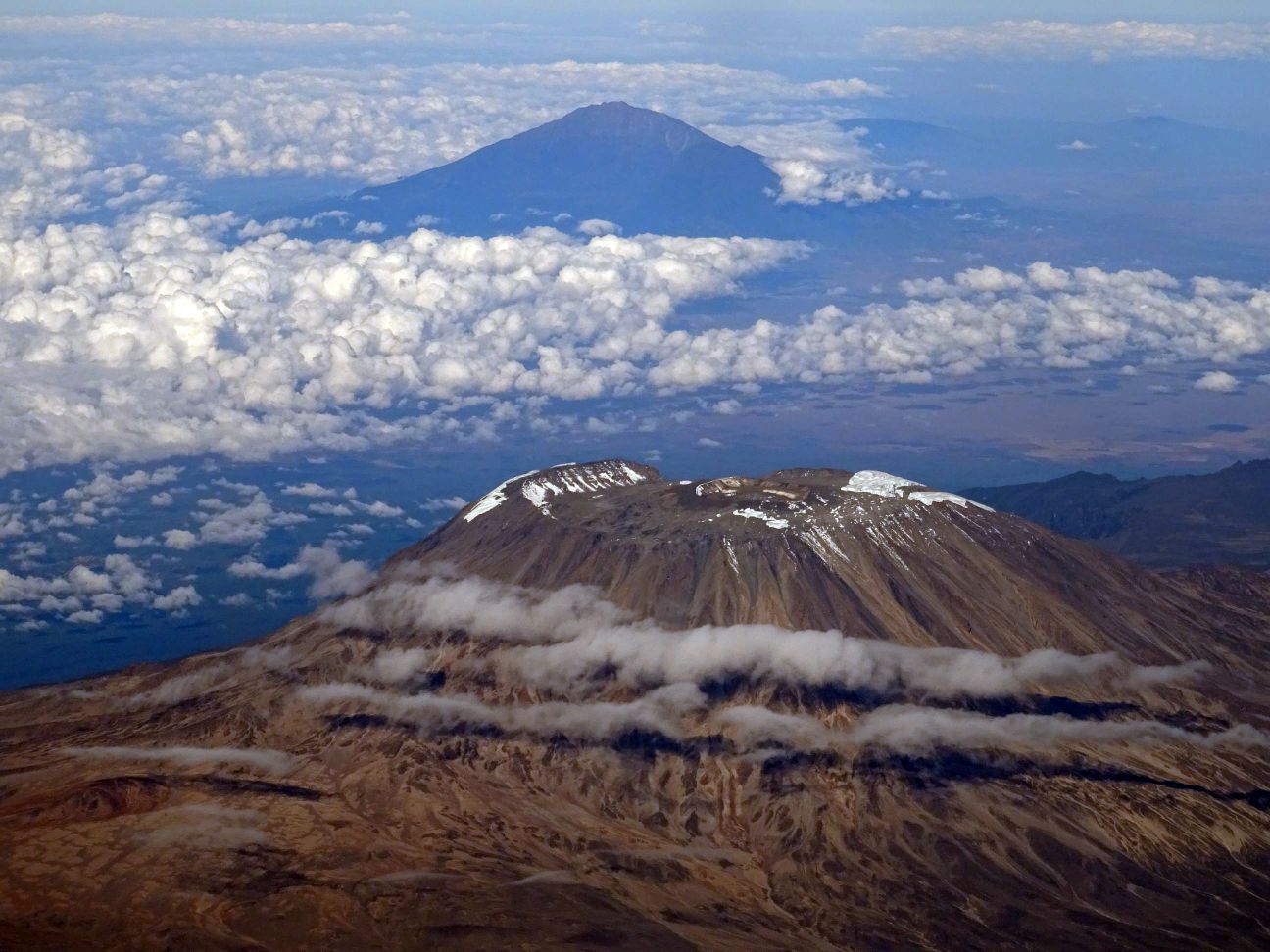 Mt Kilimanjaro in the foreground, Mt Meru in the background – stunning views from our flight over to Dar

Jon’s office is in Dar es Salaam on the coast (Dar is not the capital, which is Dodoma, in the centre of the country), in the part of Dar known as ‘The Peninsula’. This is very much the expat area, containing most of the embassies, NGOs, big houses and the yacht club. Compared to the city it’s pretty free of traffic, but as soon as you want to leave the peninsula you hit the traffic jams so most people stay on the peninsula.

We enjoyed going for runs straight out of the hotel in the mornings, swims in the pool and fresh seafood dinners every night. But despite the slightly increased sense of freedom because of the option to run straight out the door, we quickly realised we prefer Nairobi (a lot more) which feels more cosmopolitan, has a better climate, no malaria and lots more things to do. That said, it was a very nice change for a week. 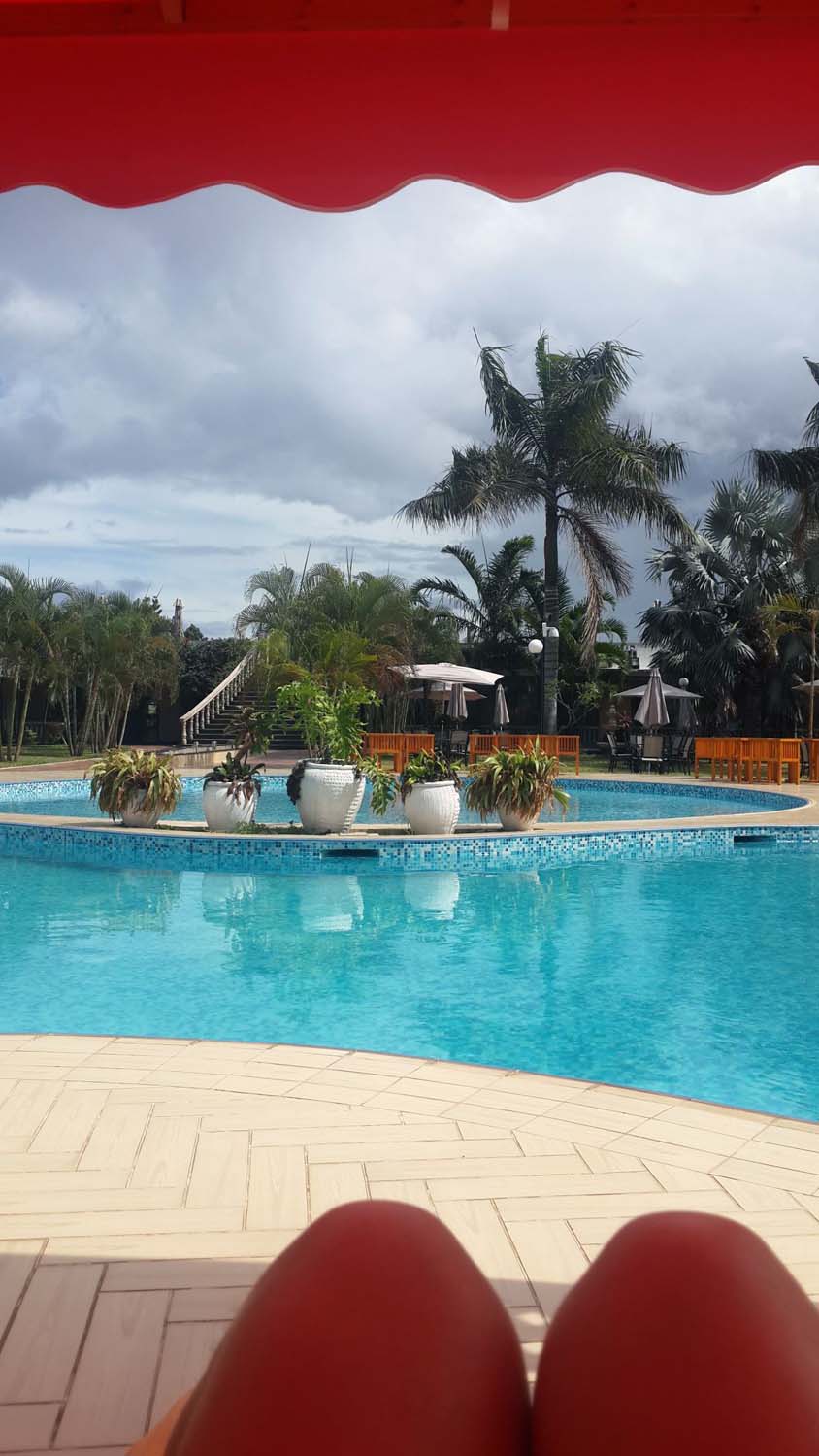 enjoying the pool at the hotel

On Friday afternoon one of the company drivers took us to the ferry terminal in town and in the pouring rain we boarded the VIP top section of the ultra-modern catamaran to Zanzibar  (we’re certainly living it up here!). The VIP decision was a good choice as it turned out most of the other seats were in the open. Probably quite nice on a sunny day, not so much in the rain…

Only a few hours later we arrived and were surprised to get a second entry stamp without having left the country. We were met by a guy with a tiny Suzuki Vitara that we had rented for the weekend to give us some freedom on the island. The tiny car came with some interesting instructions: when you park it somewhere and leave it, can you please remove the mechanisms in the door for the electric windows and take them with you….

And where you are normally given a full tank of petrol when you pick up a rental, this one was empty. And when we say empty, we mean empty. There was not a single drop left in it so before we could even head out to the petrol station the guy had to send a mate over with a petrol can to add a couple of litres so we could start the car! 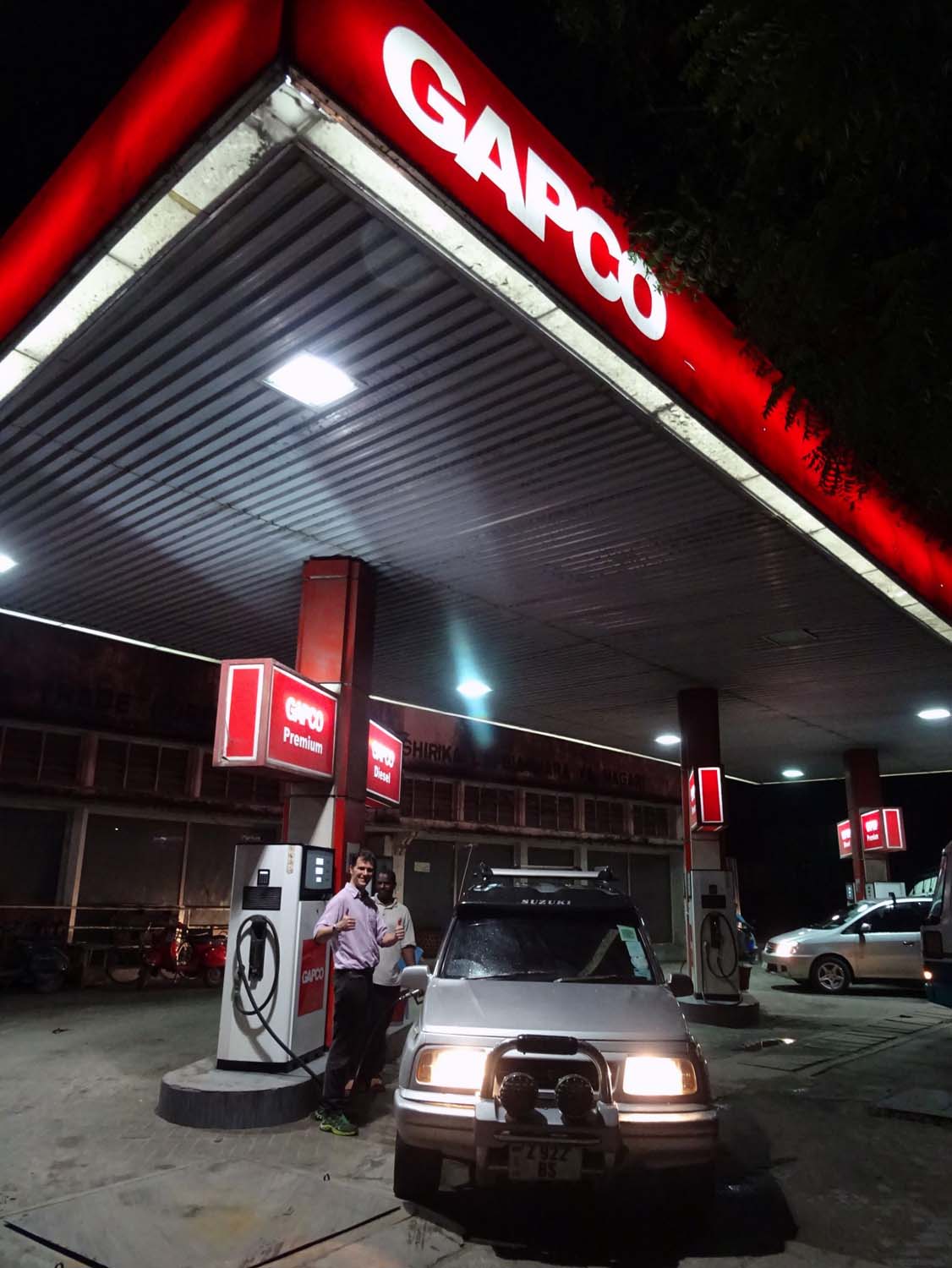 filling her up as she was given to us with not a drop of petrol in the tank!

We spent a few very pleasant hours in Stonetown, exploring the narrow and windy roads, trying to recognise places from our previous visits and finding a lovely place for yet another fresh seafood dinner before heading straight to the night markets for a crepe with banana and nutella…. yummm! 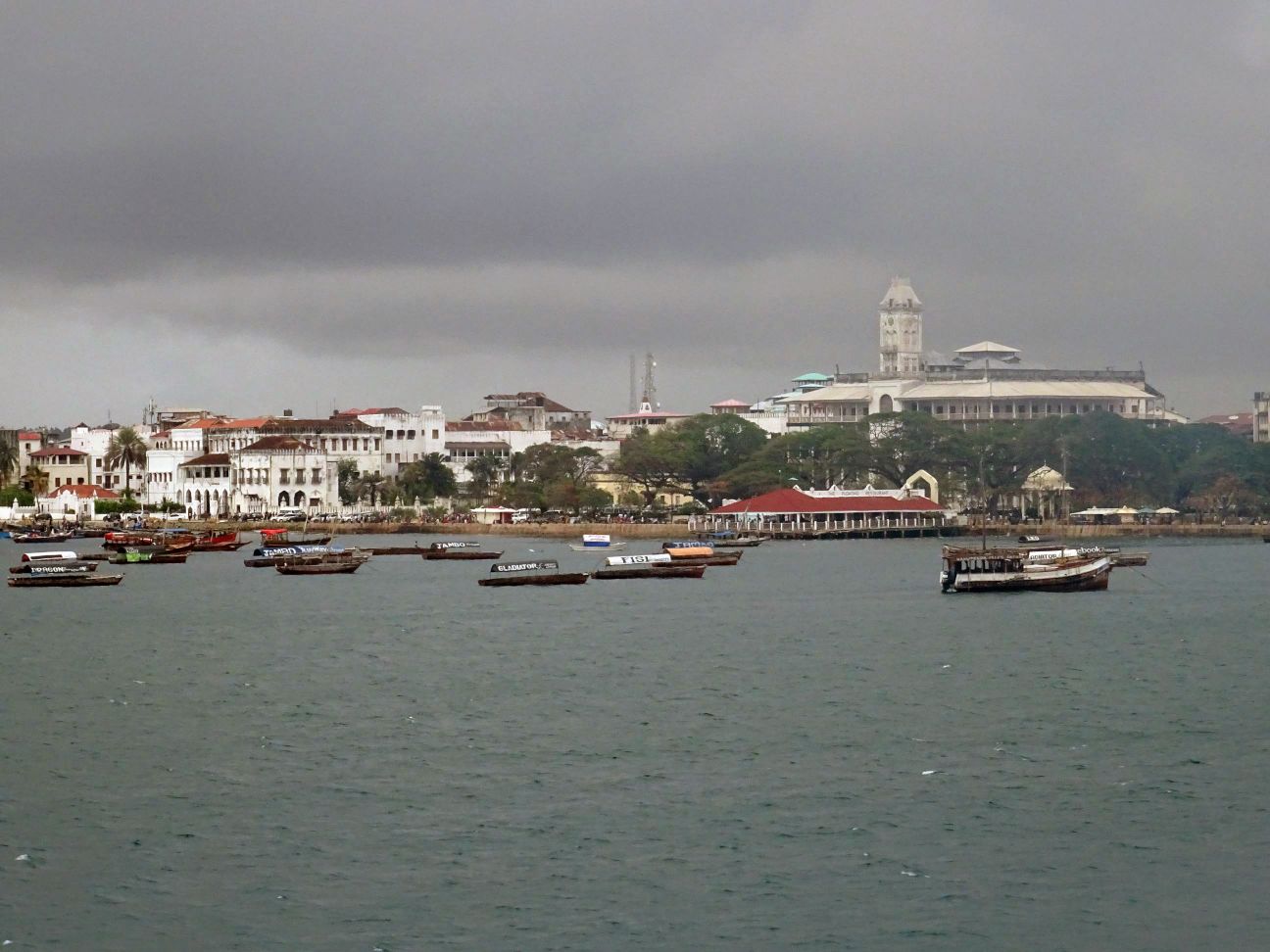 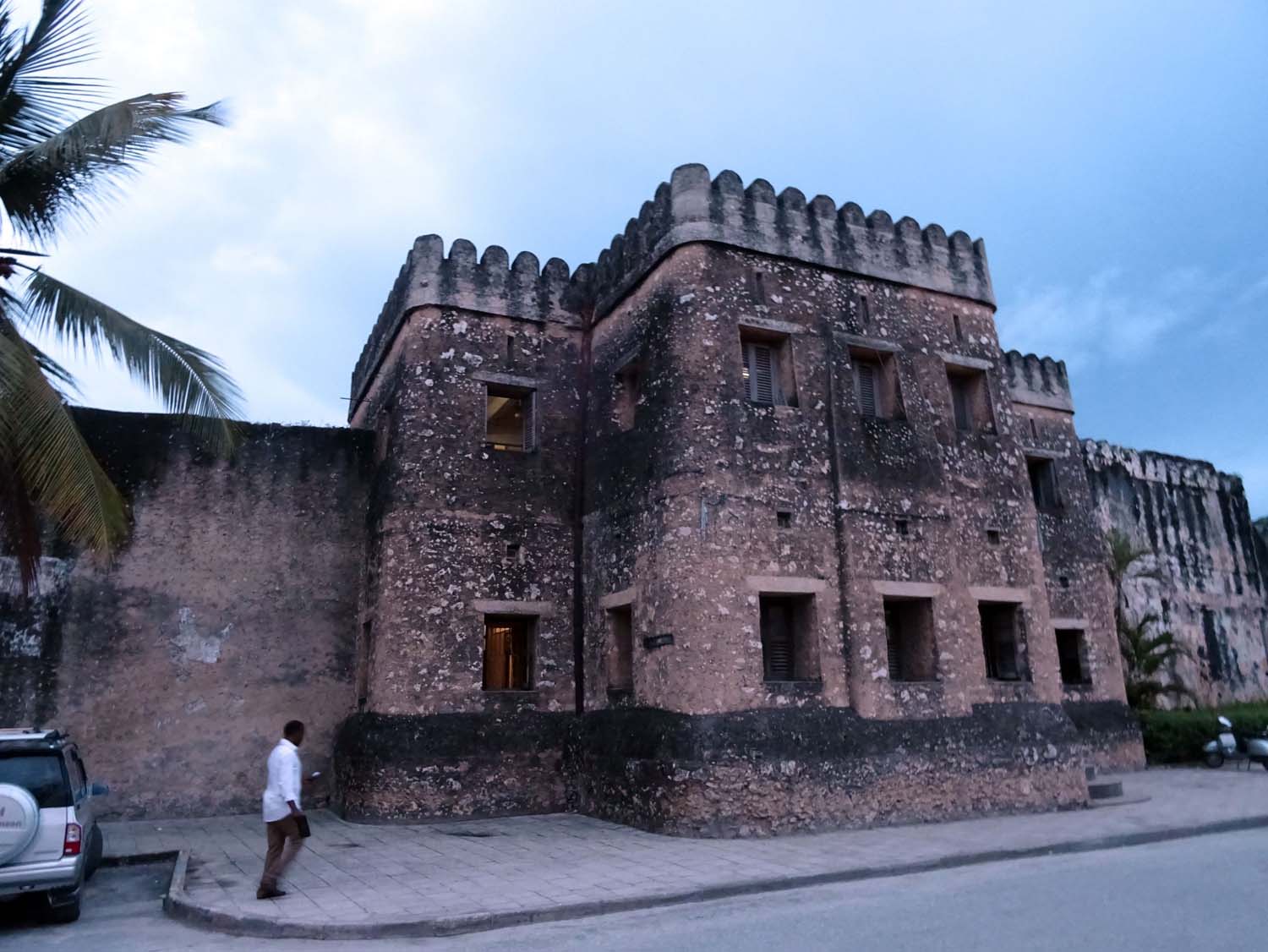 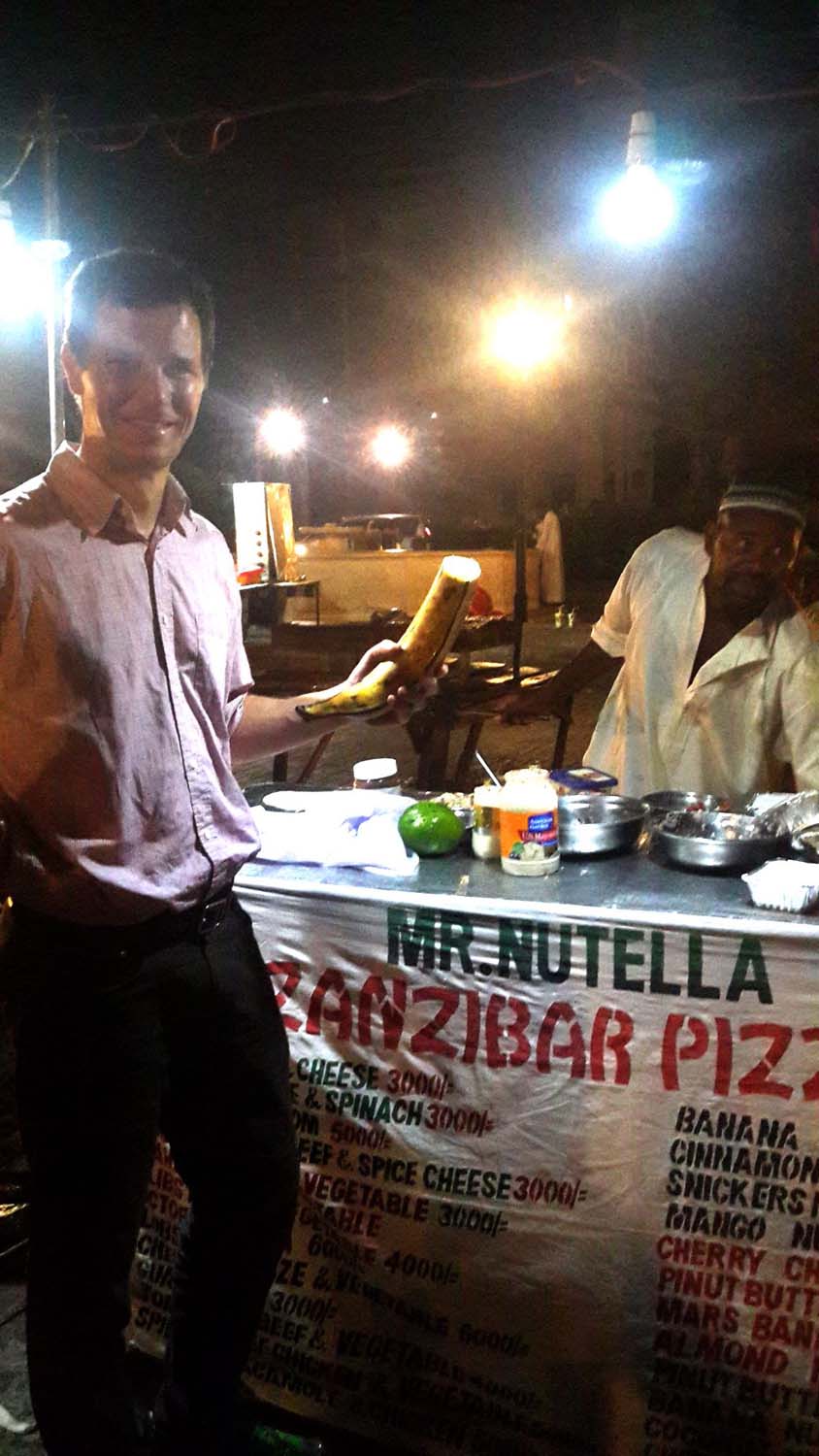 nutella and banana pancake in Stonetown, check out the size of the bananas from neighbouring Pemba island!

Then it was time to hit the road as our hotel was on the other (eastern) side of the island. And it just started to rain again as we headed out of town. Trying to find the right road in the dark and in the rain with non-cleaning windscreen wipers was a bit of a challenge. But after stopping to clean the windscreen wipers with a bit of newspaper it got a lot better. 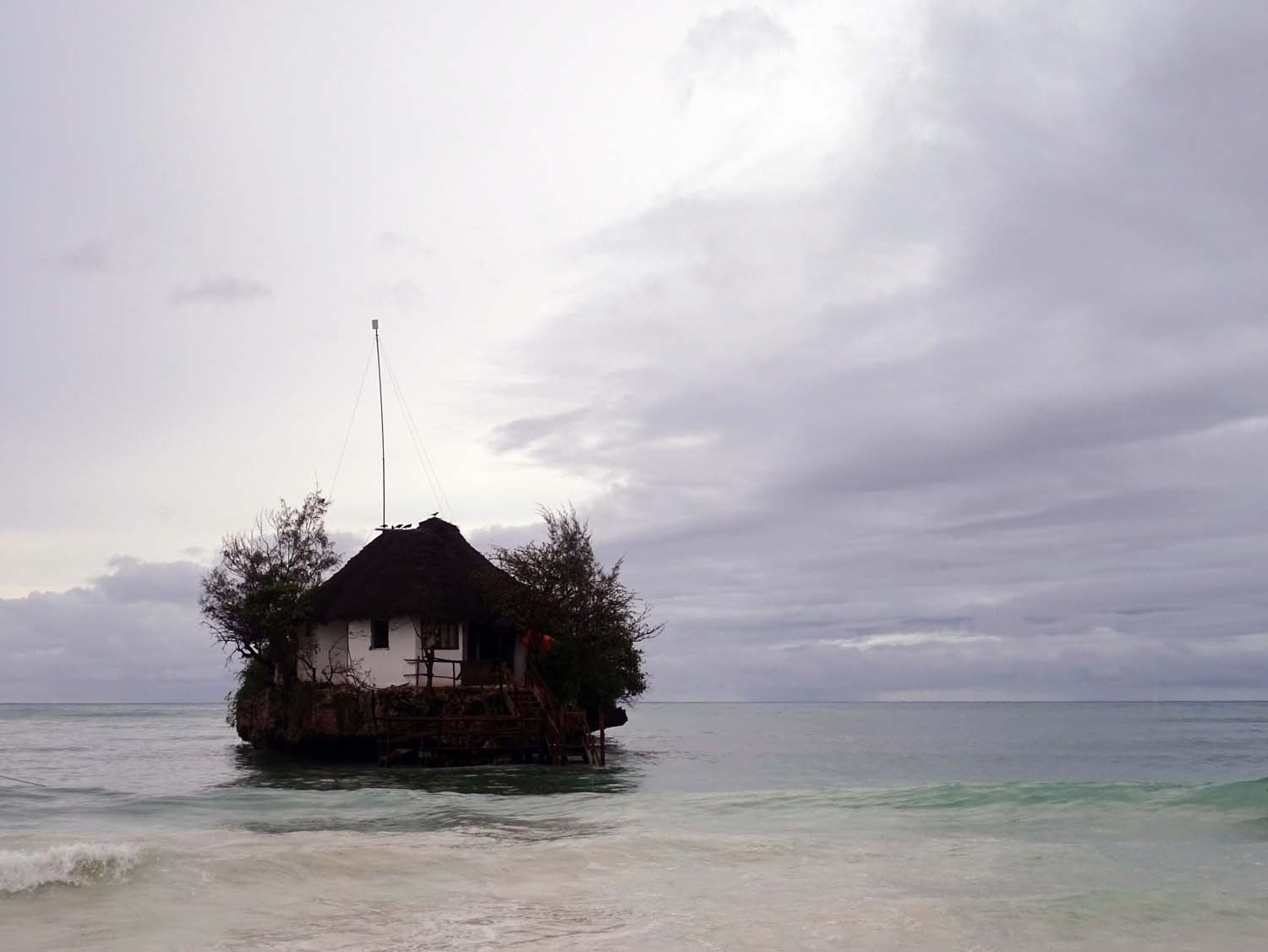 The Rock, a little restaurant perfect for lunch

We wouldn’t recommend visiting Zanzibar in the wet season if you’re coming specifically for a beach holiday (as some people had). It rains a lot. Whilst we were determined to make the most of our short break, clearly it had got the better of some of the holiday makers staying at our hotel. The impressive acrobatic display did at least cheer a few of them up. And whilst you are there, you must visit ‘The Rock’. It is perched just offshore so you can walk to it at low tide, but need a boat taxi when returning at high-tide after a lovely lunch. 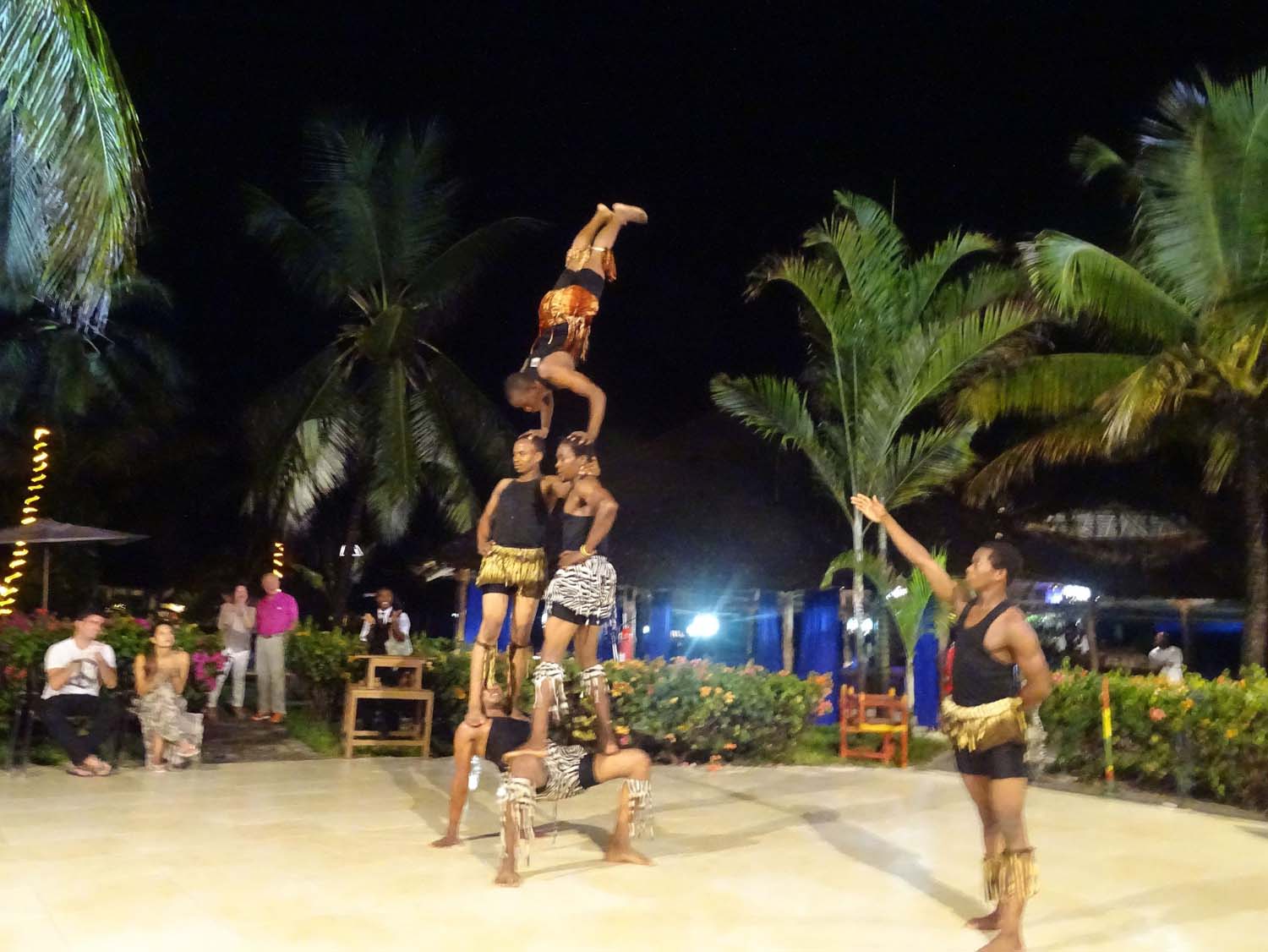 these guys were seriously impressive!

We had booked a couple of dives for the next day, and despite the threat of rain we weren’t going to back out (like some people did). The dives were very enjoyable, but the biggest surprise came when we exited the water after the second dive. The crew had spotted dolphins that had just cruised past.  We were hurried back into the boat and were told to get ready as they moved the boat right into the path of the playful dolphins. Just before they reached us, we jumped in and had a fantastic time swimming and playing with the dolphins. Amazing! 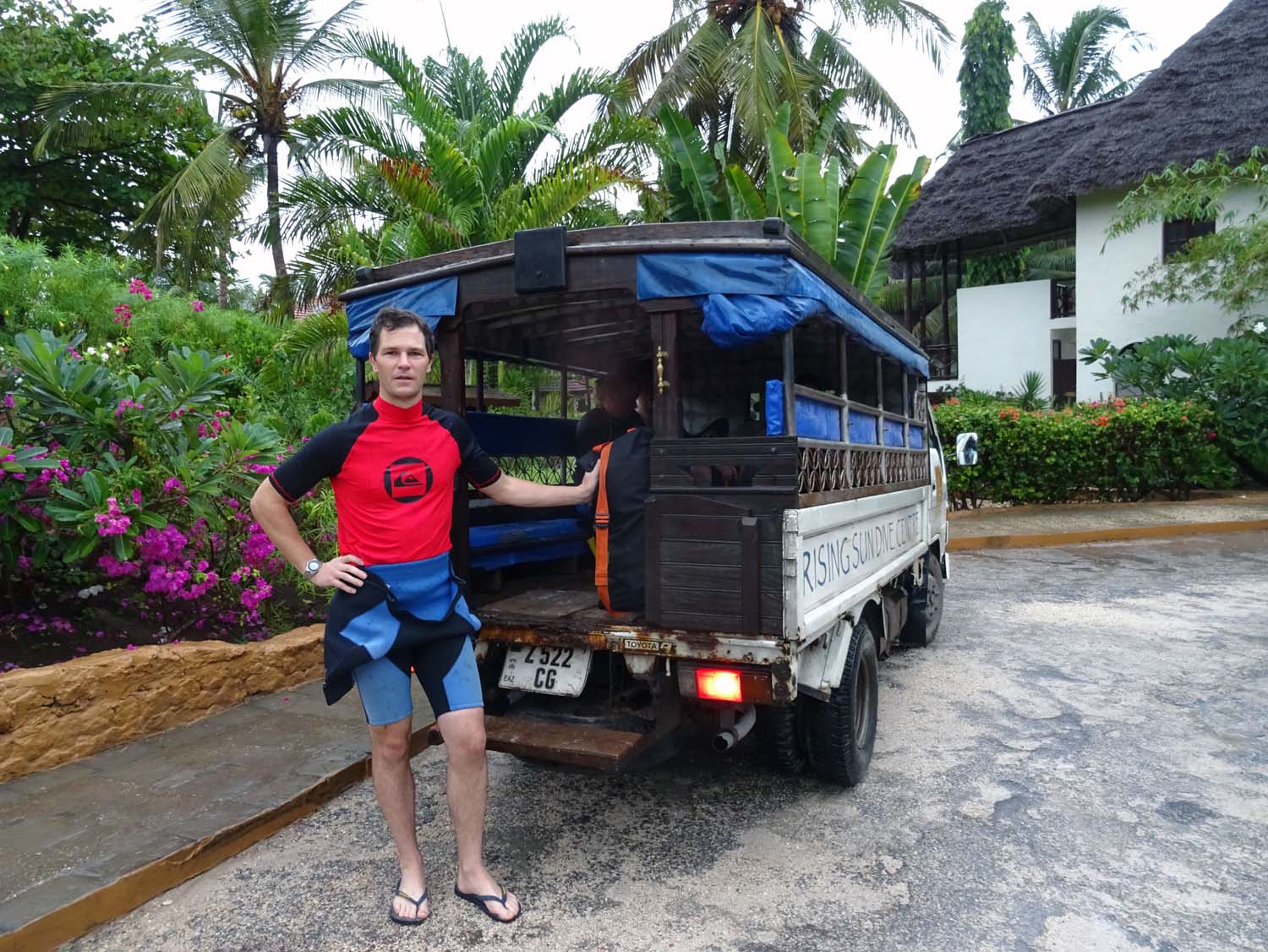 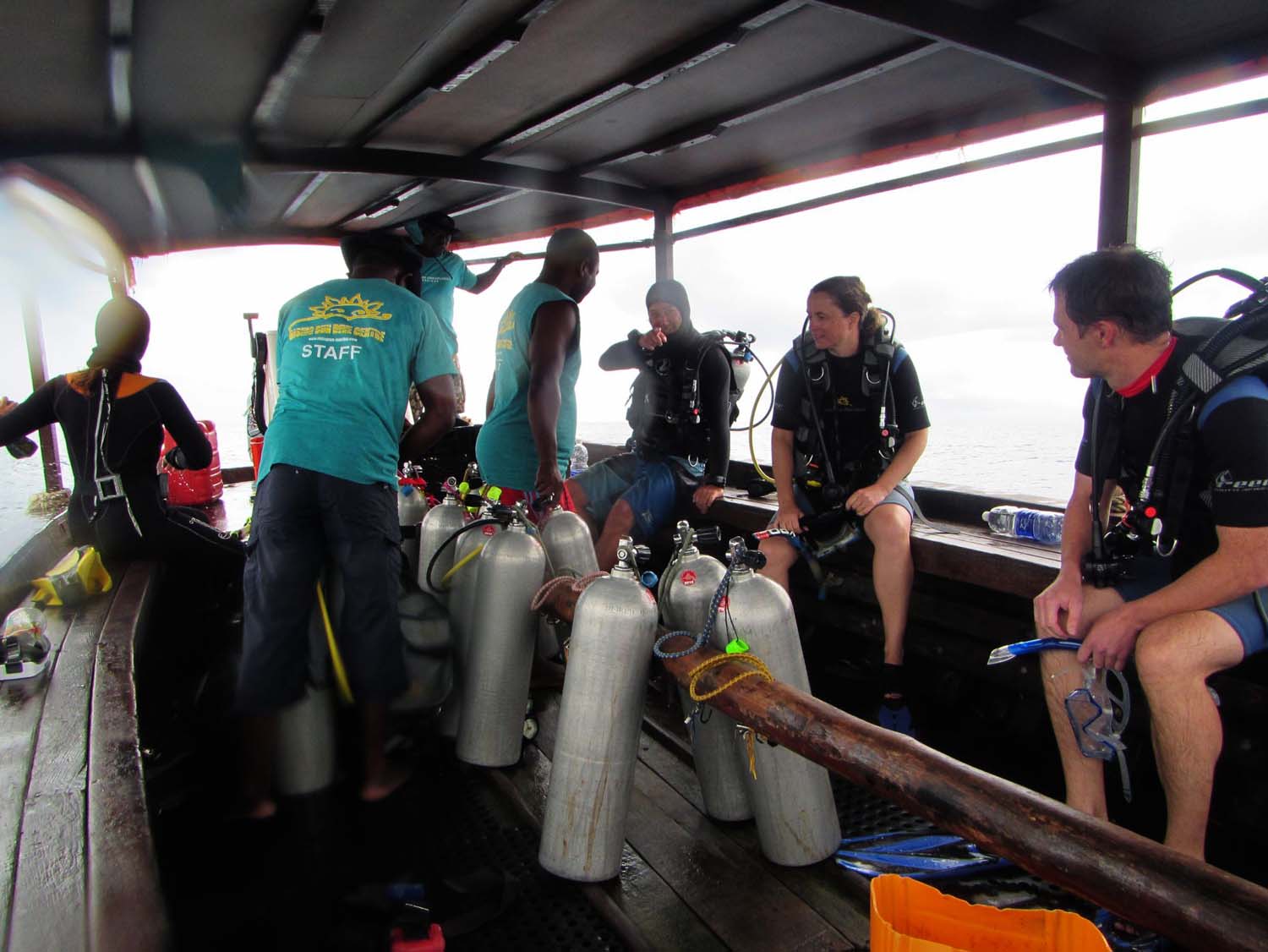 our dive boat on Zanzibar, getting ready to go in 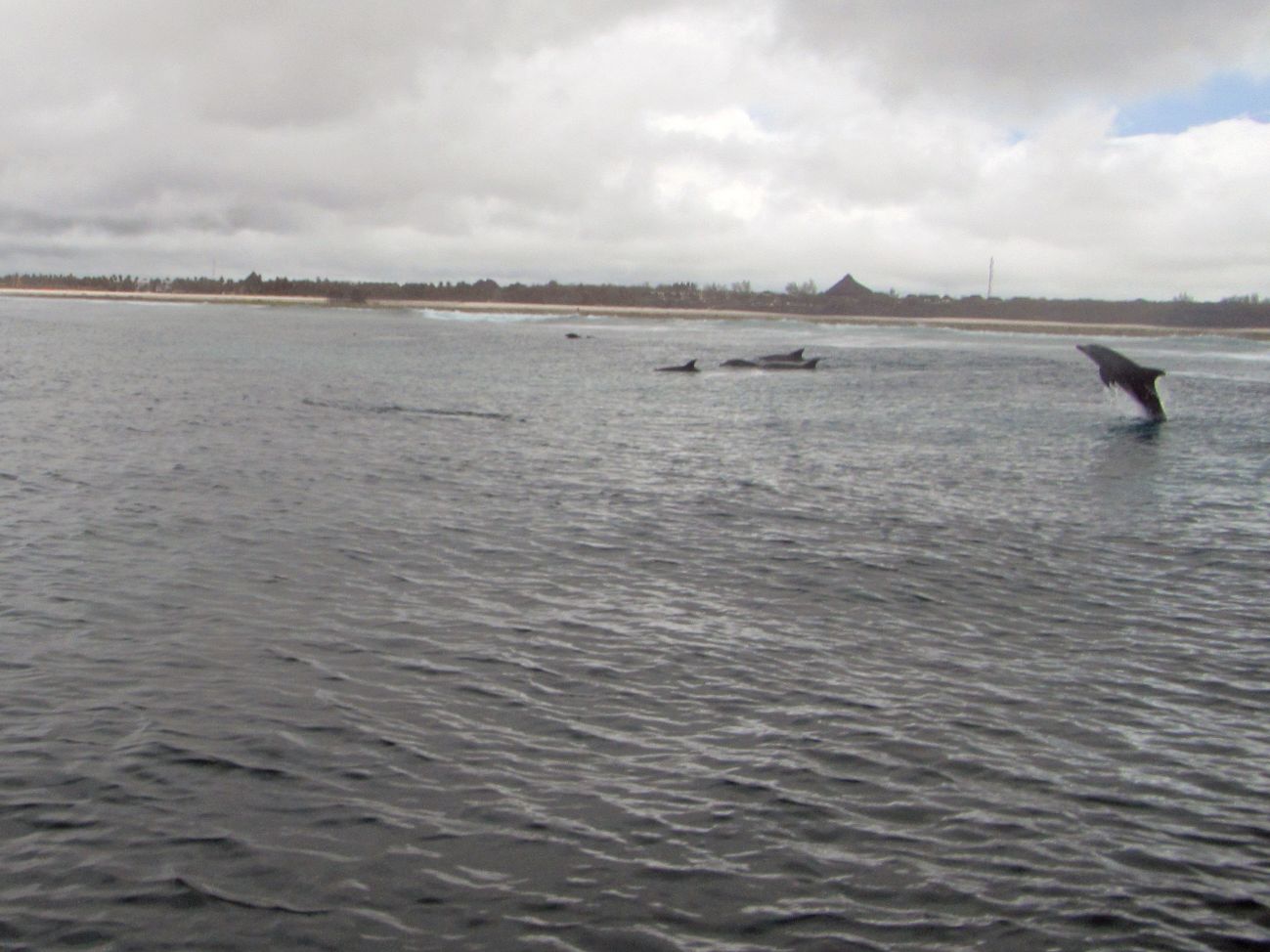 the dolphins enjoying the surf 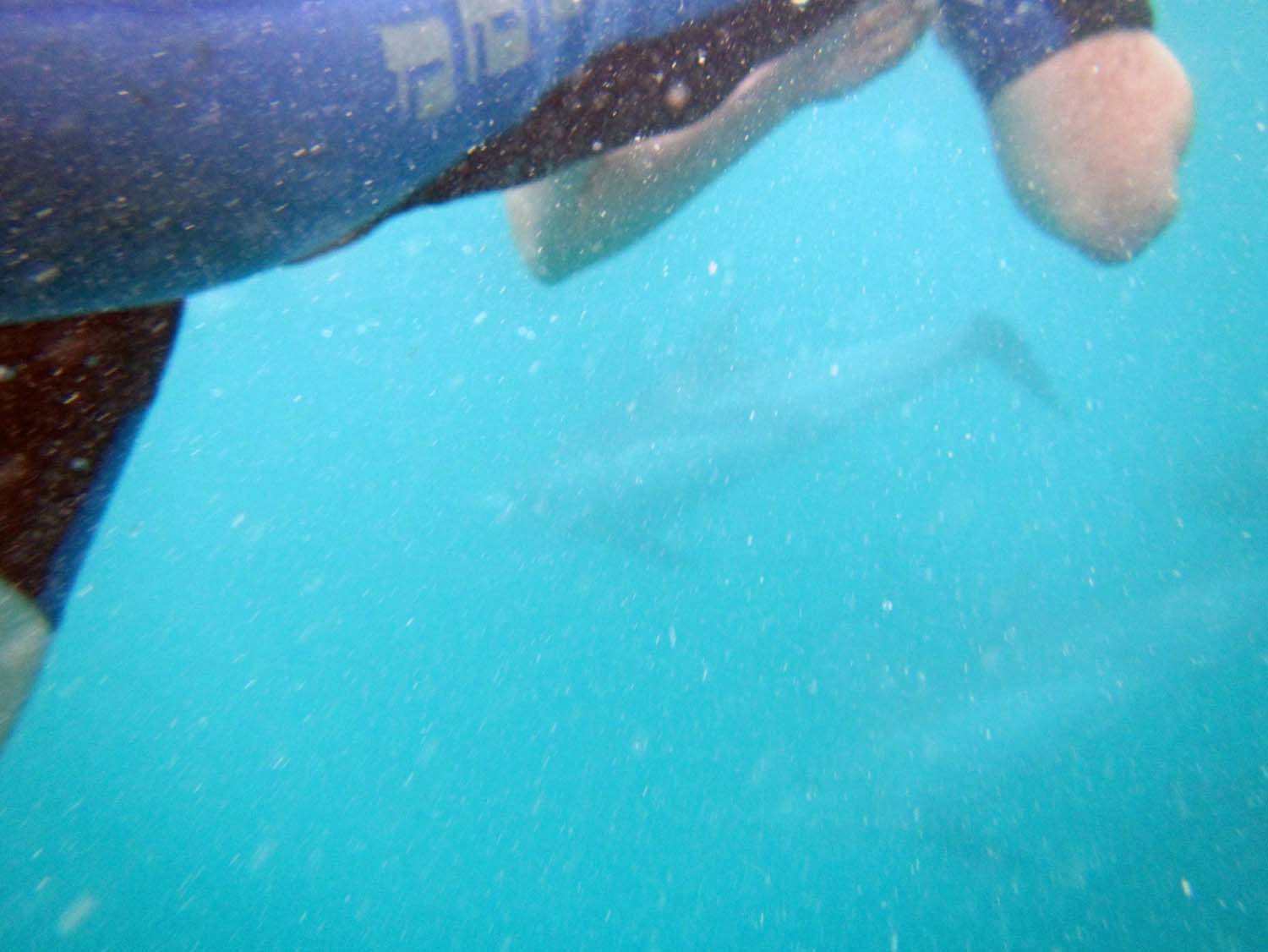 unexpectedly swimming with dolphins, that’s Jude in the foreground 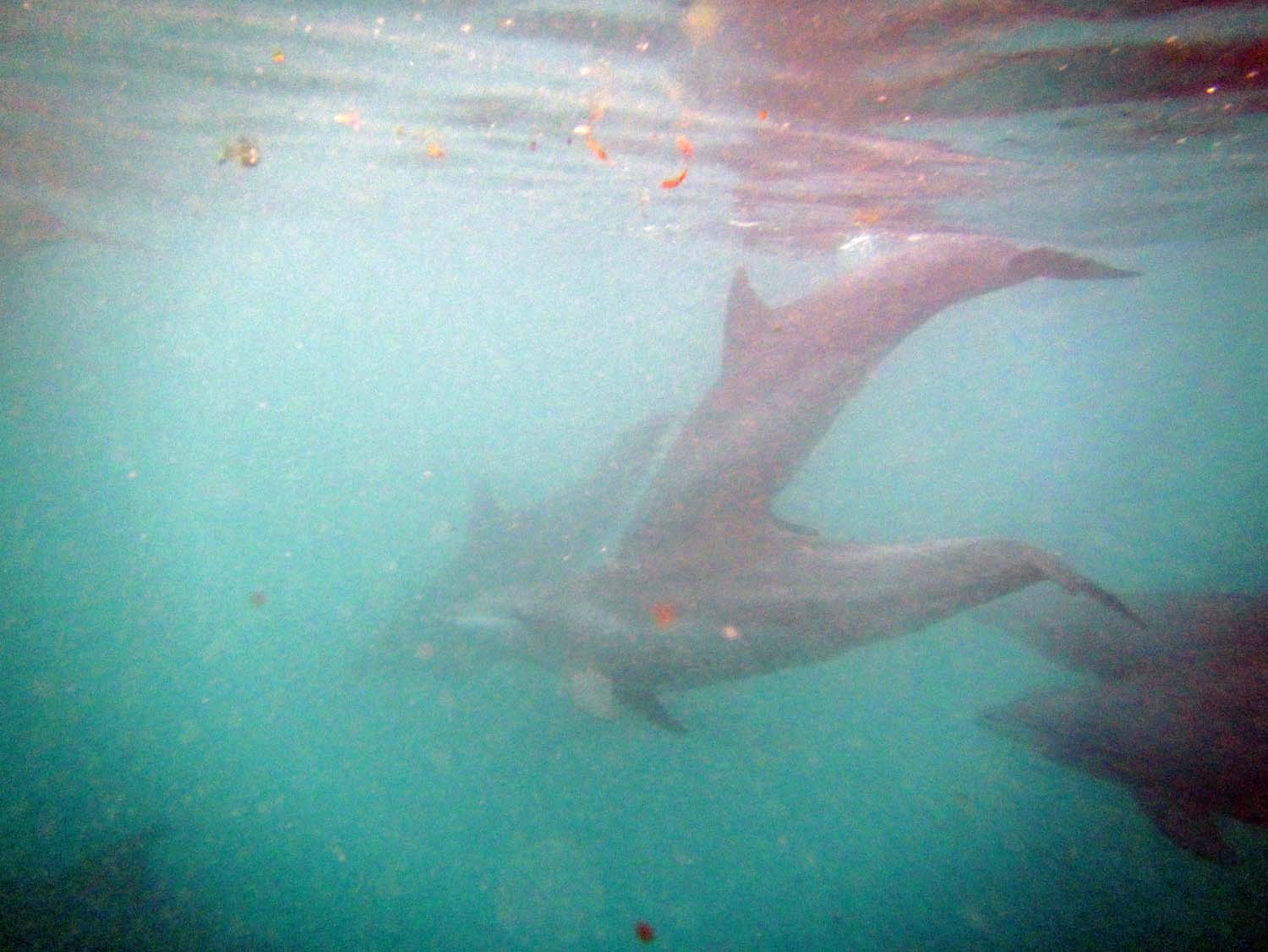 Zanzibar only has one national park and we had to check out the endemic red colobus monkeys that hang out there. They are quite used to humans around them so they continue eating and relaxing even when you get close. They look very cute and we watched them for at least an hour before heading towards the boardwalk through the mangrove forest that is part of the national park. On our way there we were incredibly lucky as 2 elephant shrews crossed the path in front of us!! 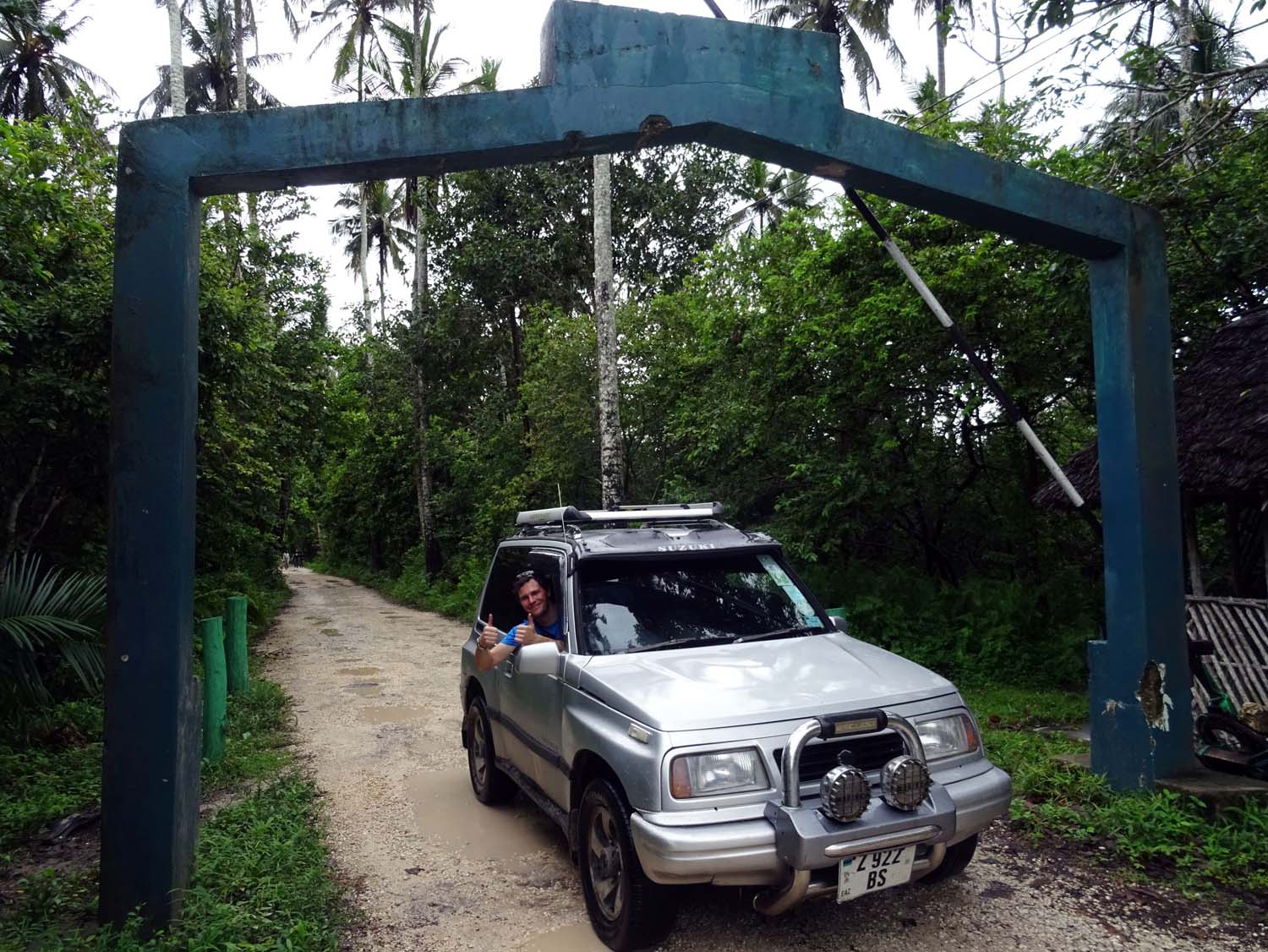 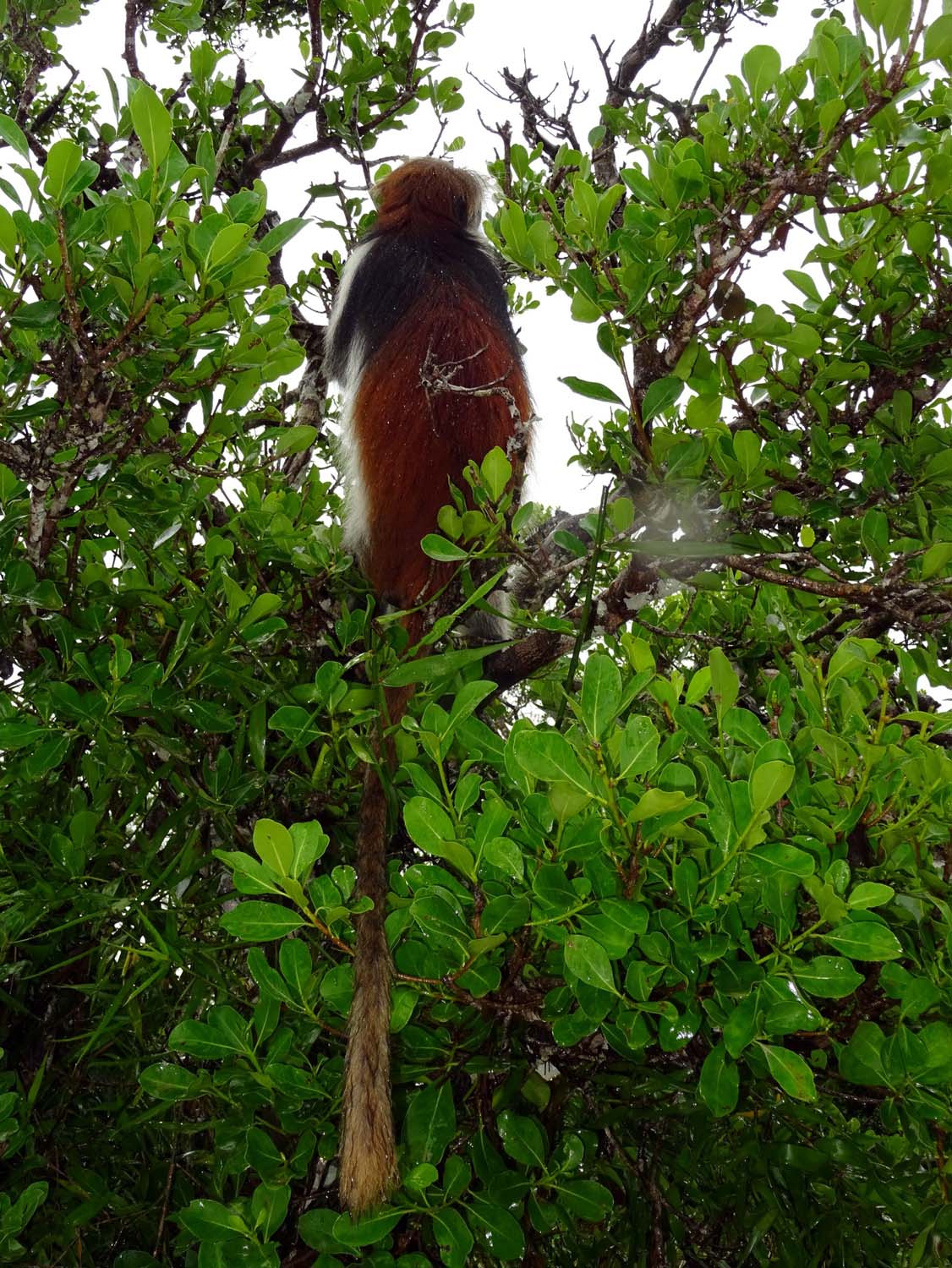 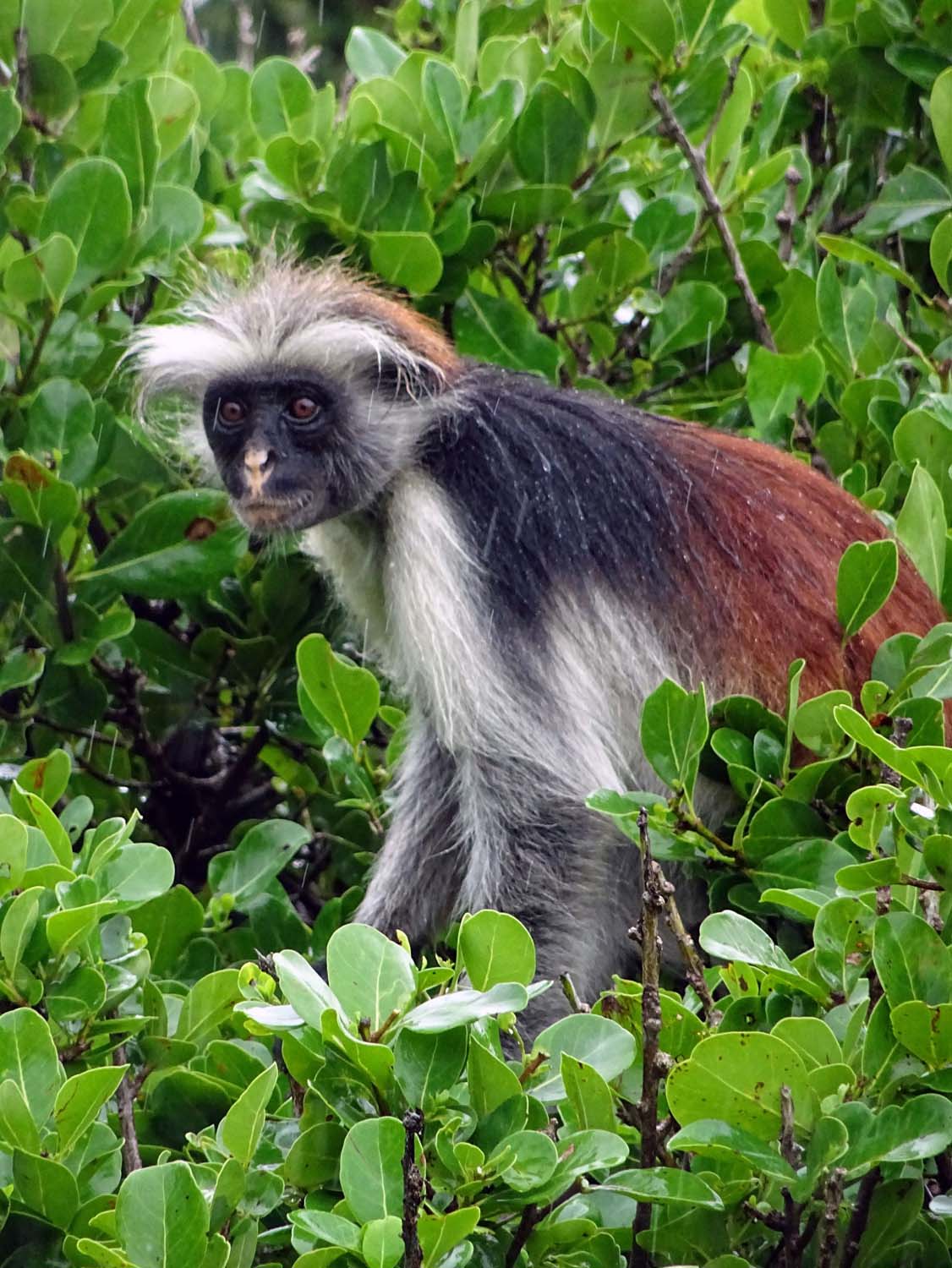 a rather damp red monkey

Elephant shrews are diurnal, but very rarely seen as they are extremely shy. There are many different species and they live almost all over Africa, getting their names from their long noses which they use to find insects, spiders, centipedes and earthworms. They also have very long thin legs for the size of their body and hop around like rabbits. We didn’t get a picture of the 2 we saw, but here’s a picture of some black and rufous elephant shrews so you have an idea what we saw. 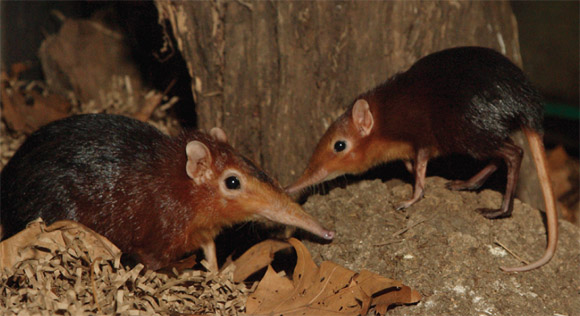 elephant shrews (not our photo)

A very early start on Monday morning to catch the early flight back home meant Jon was back on time to go straight to the office after a quick shower, shave and breakfast as the direct flight from Zanzibar to Nairobi is only just over an hour.