The Uluguru Mountains roughly run north to south, and Kimhandu Hill is the highest peak at 2634m. The Waluguru tribe inhabits the mountains and the lowland around it. This tribe is unusual in Tanzania as they follow a matrilineal descent where land ownership and inheritance is through the women of the tribe.

The Lukwangule Plateau and surrounding forests of the Uluguru Mountains feed many little streams and rivers. These all feed into the Ruvu River which is Dar es Salaam’s main water supply, as well as for the surrounding agricultural land.

The Uluguru Mountains are located less than 200km from Dar es Salaam and you’d think they would make a perfect weekend destination for some hiking and exploring. Sadly it takes between 4 and 6 hours to get there due to the traffic conditions on the Tanzanian roads. We left on Friday afternoon just before 3pm with Esther and Barbara, and didn’t arrive at the Mbuyuni Farm until well after 8.30pm. Even with the advantage of driving Esther’s car with diplomatic plates (which means no stops from police enthusiastically solliciting bribes or enforcing Tanzania’s road rules) it had taken us over 5.5 hours to drive 190km.

It didn’t help that a truck had lost control and managed to wedge itself into a large ditch. The efforts to secure the Zambian copper load and pull the truck back onto the road blocked all traffic for about 30 minutes. However, the traffic jam caused by the closure took a further 45 minutes to clear because drivers in both directions has pushed to the front of the queue leaving nowhere for anybody to go once the obstruction was cleared (think 5 lanes of traffic squeezed into 2 lanes of road on both sides of the truck).

The adventure wasn’t quite over though, because the bridge to the farm had been flooded due to exceptionally heavy rainfall. Luckily the footbridge was still just passable. So Esther’s car was left on the wrong side of the river with an askari (guard) and Sam(antha) drove us up to the farm once we had crossed.

It was pretty late by the time we arrived, but a delicious dinner was still served on the veranda of our cottage. The next morning we could finally see where we were. The lovely cottages have a stunning view over the Uluguru Mountains and we were heading out there after breakfast. The river level was still dropping, but Sam still had to ferry us down there in the car to cross on foot. From there we could drive Esther’s car to Morogoro to pick up Charles, our guide. 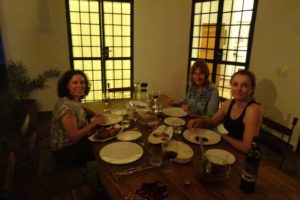 He was a happy chap, very organised, but focused on standard hikes. It was pleasant enough to walk through the villages to a waterfall, but we would have preferred to walk through more forested, natural areas. We did see lots of interesting produce being brought down the hill on its way to the local markets, including strawberries and raspberries which must grow well on the cooler upper slopes. More cultivation however, equals less forest…

As we walked further on from the waterfall, the path became single track and more interesting. But as we only had a day to explore, we were restricted by time and couldn’t reach the native alpine forest this time. So, after a packed lunch on the trail with views to yet another waterfall, we turned around and ambled back down the hill. 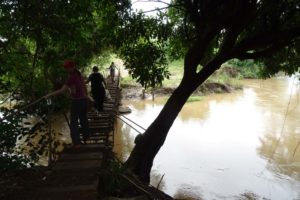 Jude, Barbara and Esther crossing the footbridge as the car bridge is flooded 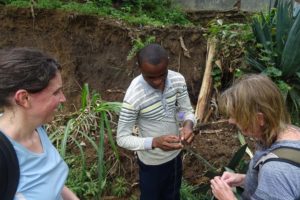 our guide Charles showing us how to make rope from sisal 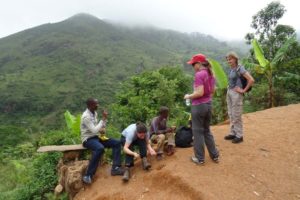 Charles, Esther, Jude and Barbara having a quick break in the Uluguru Mountains 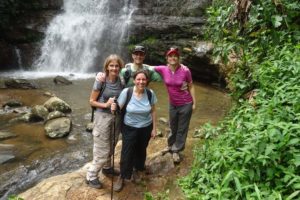 Barbara, Esther, Jon and Jude at the waterfall, there is also a pool for swimming a little further downstream 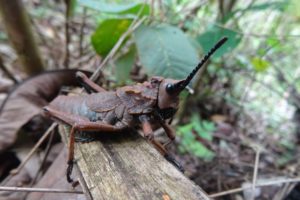 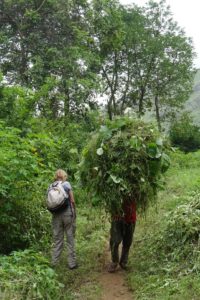 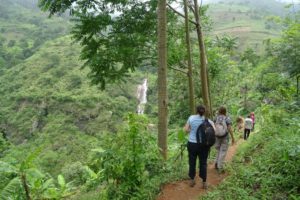 Esther, Barbara, Charles and Jude on the trail to the forest 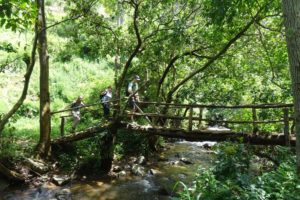 Barbara, Esther and Jon on the way back

On our return to the farm, Sam gave us a little tour and we were shown the areas where they grow lemongrass, chilis, moringa and hibiscus. A lot is exported to Europe, but luckily for us, it’s also sold on the farm. After the tour we chilled by one of the cottages and were happy spotting birds and drinking wine or beer until they served dinner. It was as delicious as the first one and we were happy we had opted for full board. 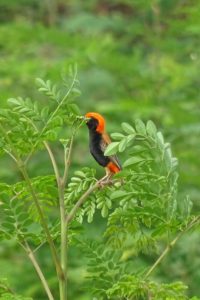 we spot a new bird – the Zanzibar red bishop 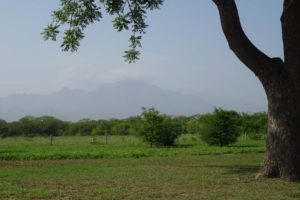 views of the Uluguru Mountains from the Mbuyuni Farm Retreat cottages, it’s a bit hazy today 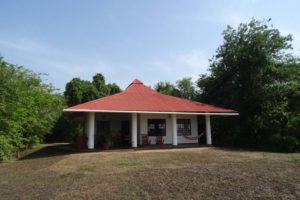 one of the cottages of the Mbuyuni Farm Retreat

The farm has also created a network of trails to explore the bush. On Sunday morning, some of us went for a run, bumping into bush bucks or farm pigs along the way. After a leisurely breakfast we all went for a more gentle lap of the red trail, enjoying the bird life and views.
After a final shower and lunch, it was time to hit the road again. We were lucky, it only took us 4 hours this time (the diplomatic plates were certainly useful), and just before 6.30pm we rolled onto the Peninsula where we all live. 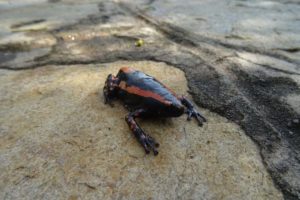 Jude rescues about 20 frogs from the swimming pool, including this beautiful rubber banded frog who can catch prey up to 200 degrees with his tongue (which means slightly backwards!), walks instead of hops and sings like a bird. 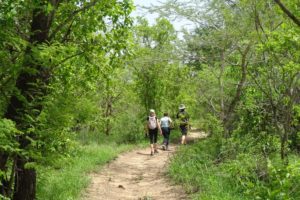 Barbara, Esther and Jon on the red trail on the Mbuyuni Farm

We stayed two nights in the cottages at the Mbuyuni Farm Retreat, run by Simone and Kim. A great organic farm with a large section left bush where they are trying to regenerate it by planting trees and just leaving it alone. We booked full board and can highly recommend it, the food is delicious.