Exploring a new area and revisiting an old classic

We always enjoy exploring new places, but sometimes it is also fun to return to a place you have been before. We hadn’t been back to this classic of classics whilst living in Tanzania yet. In fact, it was 8 years ago since Jude had been there and an incredible 20 years ago for Jon. And when Jude’s parents booked their flights we decided we wanted to show them one of the most impressive places on the planet. We are of course talking about the Ngorongoro Crater.

Mention this name and people know what you are talking about. It is the largest unbroken caldera in the world (that is not just a lake), choc-a-bloc full of animals. In fact, it is one of only two places in Tanzania where you can actually see the big 5, if you are lucky.

But we are getting ahead of ourselves. Before showing Jude’s parents this classic, we decided to explore a new area for us – Tarangire NP. We were keen to see the amazing landscapes this park is famous for, and of course see some animals, also at night as this national park is one of the few places in Tanzania that allows night safaris.

We arrived at Kili airport early in the morning and hopped in our own car as Frank had driven it up for us again. We dropped Frank in Arusha and continued our journey to the Tarangire NP gate where we spent some time going through the incredibly slow payment process. But soon afterwards we were heading to camp, our safari had started. 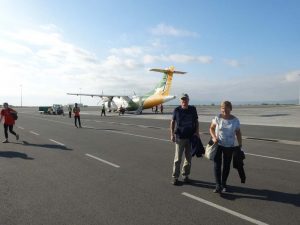 Nico and Riet at the Kilimanjaro International Airport

As they were working on the main road through the park, we slowly continued south on the smaller roads. It took a long time to reach the lodge, but we enjoyed the wildlife on our way and stopped whenever we spotted something interesting. 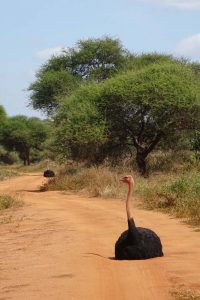 ostriches snoozing in the middle of the road 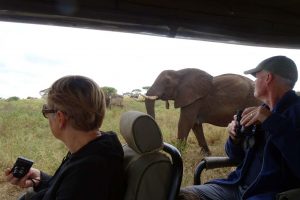 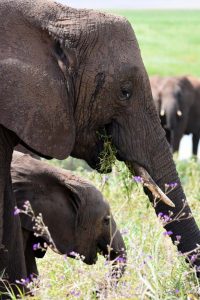 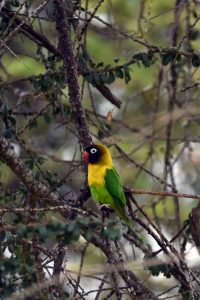 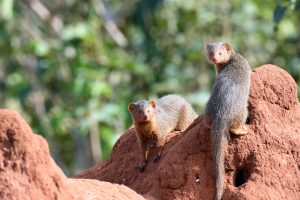 dwarf mongoose on a termite mount in Tarangire NP

The rest of the game drives were all done in the open vehicle of the lodge and we spotted some new birds mainly in the large swamp area close to camp, drove around looking for animals, watching animals, learning loads from our guide, and got up close and very personal with some inquisitive elephants.

The evening drive was fun although we didn’t find anything terribly exciting. Just the usual jackals, bush babies, nightjars and a lioness with one 6-month old cub crossing the road right in front of us, we followed it for a little while before they disappeared into the tall grass on the other side. It was still nice to try to find the nocturnal animals, and we enjoy being in the bush at night, a totally different experience. 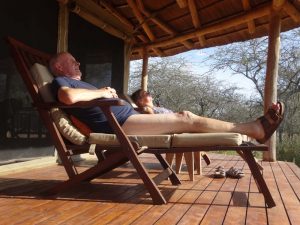 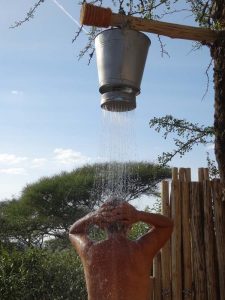 Riet rinsing off in the outdoor shower at Tarangire NP 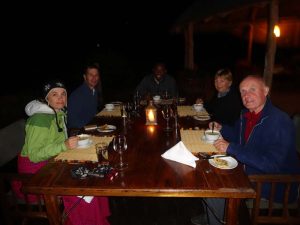 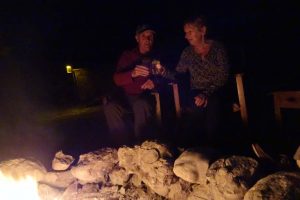 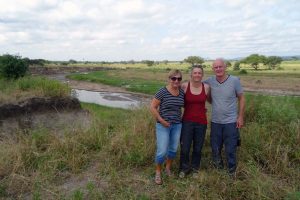 After Tarangire NP we approached the Lodoare gate of the NCA – the Ngorongoro Conservation Area. We were picked up by our guide and left our car to the mercy of the aggressive olive baboons prowling the car park.

The drive up goes through thick forest and up a decent incline. And then, just like magic, you reach the top of the crater rim and can get a glimpse of the sheer size of the crater beneath you. It was still as mesmerising as 8 or even 20 years ago. Nothing much had changed. After all, even 20 years is a tiny little bleep in the life of the Ngorongoro Crater.

Nico and Riet in front of the Ngorongoro Crater

We enjoyed the viewpoint for a long time before climbing back into the car to drive along the eastern side of the rim to our futuristic looking lodge. We found new birds there, wide open vistas, roaring fires in the bar as well as our bubble-shaped rooms, and even a few chameleons. At night the Masai dancers enlivened the communal dinner, before we retreated to our bubbles, but not until we had enjoyed our nightcap in the bar. 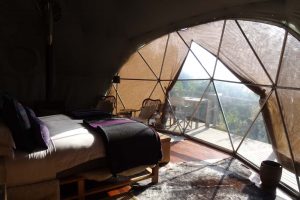 our room in the Ngorongoro Highlands

Inside our bubble we found the fire already cracking, warming up the small cocoon we were in. There were also plenty of blankets on the bed as the temperature drops significantly at night, a nice difference from the heat of Dar es Salaam. 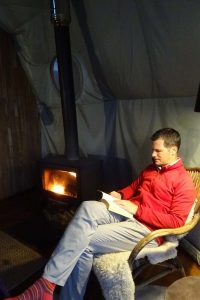 quite a novelty to read by the fire

The next morning we had to get up very early to try to make it to the gate as early as possible. From there we would start our descent into the crater itself. A journey into a time capsule, where the animals still roam the same space created a long time ago. The lions still stalk their prey in the tall grass, elephants drink from the little streams, and hippos snort and spread their dung in the same way they have been doing for thousands of years. And we were allowed to step into that scene for a brief moment and enjoy the wonders of this amazing world. 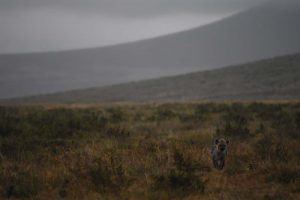 young hyena in the Ngorongoro Crater 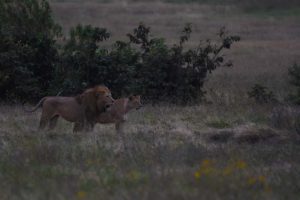 these two are on their honeymoon 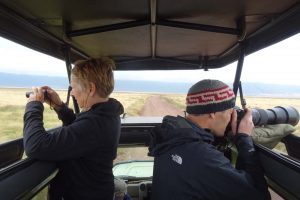 Riet and Jon taking photos in the Ngorongoro Crater 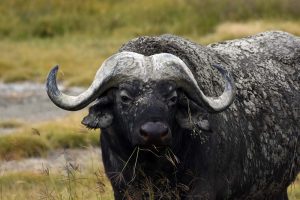 big buffalo minding his own business 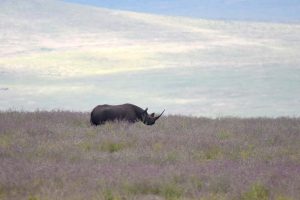 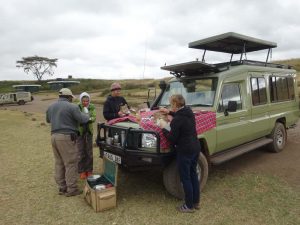 breakfast stop in the Ngorongoro Crater 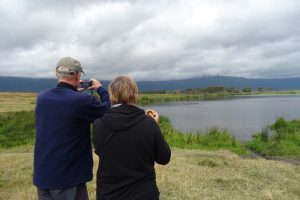 Nico and Riet taking photos of the hippos

We loved it, and if you haven’t been yet we highly recommend you put it on your bucket list. Way too soon it was time to head back up the exit road which took us to the viewpoint for one last glimpse of the crater. We picked up our car at the gate, fortunately the only baboon damage was a missing antenna, had a late lunch and drove back to Arusha for dinner before picking up Frank and heading back to the airport. Luckily Frank hadn’t been arrested like after our hike up Ol Doinyo Lengai and before we knew it we were back in our own beds in Dar es Salaam. 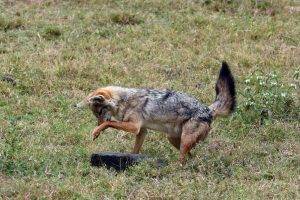 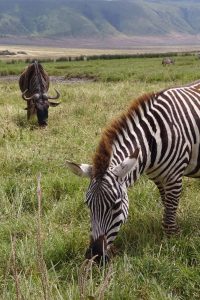 wildebeest and zebra in the Ngorongoro Crater 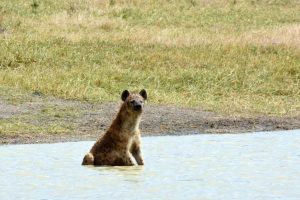