The grass is greener on the other side

It was that time of the year, and we were keen to see some of the wildebeest in action once again. When you live this close to the site of the world’s largest land migration you really want to make the most of it… well, we do.

We’re close, but due to no direct flights and not very practical flight times to the area where the migration is happening, you really need a long weekend to head up to the Serengeti from Dar es Salaam. There was none coming up in Tanzania, so we decided to create our own long weekend by taking Friday off.

Our flight had 2 stops on the way to the Kogatende airstrip in the north of the Serengeti: Zanzibar and Arusha. Kogatende is close to the Kenyan border, but most importantly right next to the Mara River. The Mara River is one of the major rivers the wildebeest cross several times in their chase of greener pastures, imagined or real. They’re not much different from us humans really. They think it must be better on the other side and risk their lives to get there…

Due to some low hanging rain clouds we nearly didn’t make it to Arusha, but with a little delay and a very low approach through the hills (with lots of warning beeps in the little Cessna Caravan) we eventually reached Arusha and then our destination in the Serengeti.

As soon as we landed and met our guide Emmanuel plus our two fellow safari-goers, we were racing towards crossing number 4 – the wildebeest were gathering in large numbers and about to cross! When we arrived there were already a few cars there and they had started crossing. Amazing! They stop and start several times, and even some zebras made the deep crossing. They had an easy entry point on the other side, but where they were getting out on our side it was quite steep. 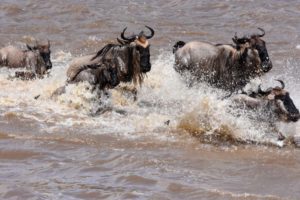 There was no crocodile action and no lions in sight and the thousands of animals all reached the other side safely. We have seen it a few times now, but it always excites and it is an incredible spectacle. We were so lucky again!

When they had all crossed we drove back the way we came and slowly made our way to the lodge for a late lunch. The lodge is spectacular, a whole new level of luxury for us. With a swimming pool, stunning ‘tents’ and the best food we have ever had on safari… They did manage to lose our bags for more than an hour so we had to pass on swimming that day, as we always say TIA – this IS Africa…. 🙂

Our afternoon drive was spent cruising around the kopjes, looking for lions and leopards, which we didn’t find. But there is always plenty of other stuff around to keep you entertained too. We enjoyed the usual gin & tonic around the big fire, followed by a communal dinner with again excellent food.

The usual wake up call came at 5.45 in the morning, it was still dark outside. But the promise of a mug of hot chocolate and of course the game drive had us out of bed pretty quickly. It turned out to be a magical morning. We spotted a lioness who was moving a 2-week old cub to a new hiding place. We followed her in the early morning sun until she disappeared into a dry creek bed. And then we discovered this was cub number three as two tiny little lions were already crawling around in the bush. No wonder we could hear her panting as she walked past us, she had already made the same journey twice before! 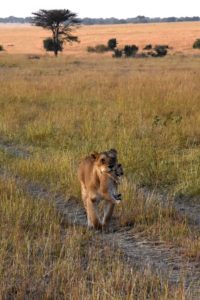 mum carrying the third cub straight past us, not easy when you are trying to breath and carry something at the same time in your mouth

We watched the cubs play, mum licking them clean and when they started feeding we left her in peace. No other cars were around and hopefully she will be left undisturbed so she feels safe enough there to leave them alone to go hunting. 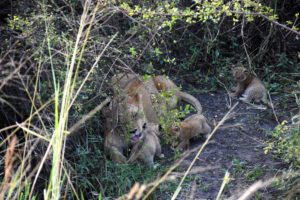 mum looking after her three cubs, away from the main pride to keep them protected 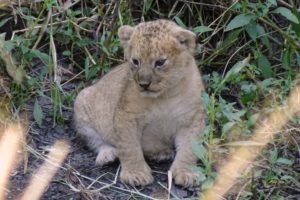 We drove back to the other lions where two 3-month old cubs were playing with their mum and two male lions and watched them for a long time too. They are totally adorable! 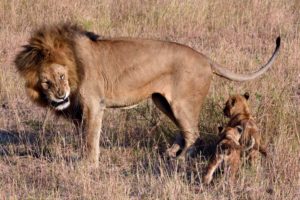 dad can be a bit grumpy towards the playful youngsters 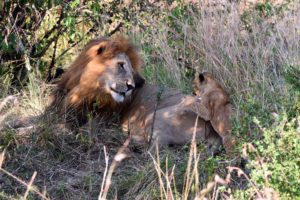 but they tolerate some play some times

When we were all getting hungry Emanuel drove us to a lovely spot on the river with a pod of hippos grunting and play-fighting. A great thing to watch whilst enjoying a picnic breakfast. We spotted an elephant in the distance, and slowly but surely she came right towards us. A small herd decided they wanted a drink and as we were already there we were not deemed a threat and they came right up in front of us. Breakfast became a very leisurely affair as we watched the hippos, the elephants, a monitor lizard and the wildebeest in the distance, wondering if they would cross. 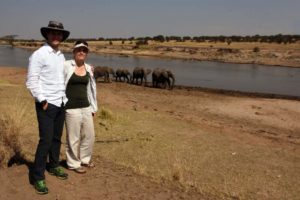 The wildebeest didn’t but the elephants did. More elephants were coming down too and more appeared from the other side, they were everywhere. It is so nice to just stand there and watch these majestic animals confidently go about their business. 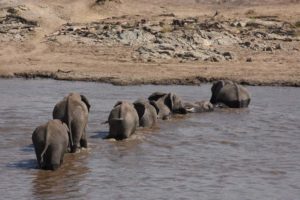 during our breakfast the wildebeest didn’t cross, but the elephants did…

Back at the lodge much later we finally went for a swim before lunch. Very refreshing after a long game drive. In the evening we explored a new area called the Lemai Wedge, basically the bit that sits underneath the Mara Triangle in Kenya. We had been on the other side before, but never on the Tanzanian side as border crossings are not allowed here unfortunately. Only wildebeest and other wildlife are free to go as they please without immigration formalities to worry about. It is a stunning location with tall grass, thousands of wildebeest and zebra all around, and lots of Balanite trees (desert dates) adding to the typical Serengeti look. 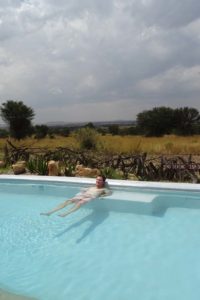 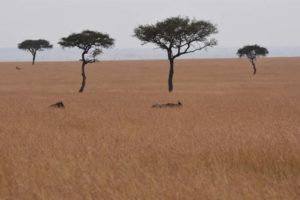 this is how tall the grass is, you can hardly see the wildebeest! It is also very easy terrain for a predator to hide… 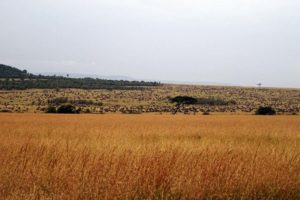 yep, all those little black dots are wildebeest 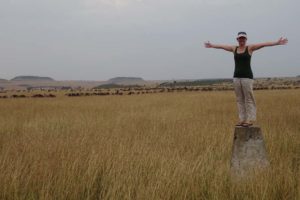 Jude on the border post between Tanzania and Kenya 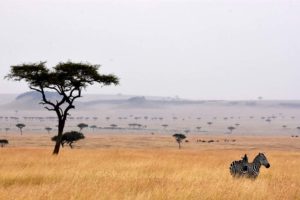 this view is never boring, such a stunning place

On the way back we first bumped into a pack of about 30 hyenas finishing up their dinner, a zebra. And when we left them, we found two male cheetahs walking the plains, two brothers who had just enjoyed their dinner, judging by their full tummies and faint remains of blood on their faces. They were fairly relaxed and walked straight past the vehicle. They are so elegant. 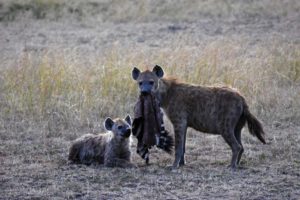 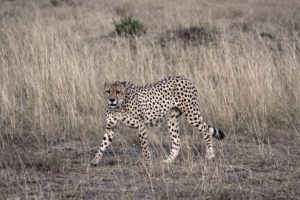 he has just enjoyed a meal with his brother

We had to love them and leave them though as it was approaching 7pm and we had to be back in camp by then. The light was fading and as we still had a bit to drive, including right past the ranger station, we were in a hurry. Past the ranger station we could slow down a little and when we were close to the lodge we spotted two black rhinos in the fading light! A mother and her 2-year old calf, another female, were coming down for a drink, straight towards us. We were the only ones there, but as it is incredibly rare to see the rhinos, Emmanuel called the other guides from camp on the radio and even people who had already finished their game drive went back out again (the lodge was only a few minutes’ drive away). Lovely to see. 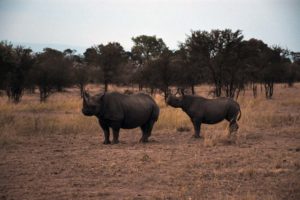 That night, after drinks around the fire, we were led to the library for a romantic dinner for two, surrounded by candles. We felt very special. And our luck continued when we were walking ‘home’. We found a yellow-winged bat, several elephants along the track, and a herd of impala and a white-tailed mongoose in our private garden. Sitting out on our balcony we enjoyed the animals, the stars and were hoping the fires glowing in the distance would not move in the wrong direction overnight.

The next morning we repeated the same ritual of the day before and at 6.15am we were on our way, checking if there were any wildebeest crossing. We just caught the tail-end of a small group swimming across in the same location as we had seen the hundreds cross the first day. We waited as a large herd of thousands of wildebeest was inching its way closer and closer to the crossing, wondering where the lions were that we could hear very clearly. Occasionally we saw a lion, but they were all behind the herd. Until a young male became impatient and revealed himself to the herd somewhere at the front near the river, in full sight for us too. Panic followed and a huge cloud of dust rose to the sky as the wildebeest scattered everywhere. More lions were now coming out from their hiding places and we counted around 12-14 adults and sub adults, a huge pride. They would have to wait a little longer for their meal though as the wildebeest were now heading in a different direction. And so were we. 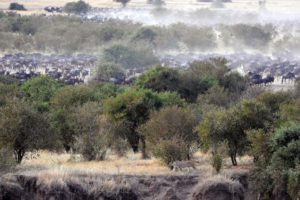 this young lion was too eager, he exposed himself too soon and scared all the wildebeest

We checked out another potential crossing site, had breakfast whilst we waited and then decided it wasn’t happening in the next few hours and we might as well go on a drive and see what else we would find. That turned out to be a good decision as we saw lots of animals, including a leopard hanging-out in a tree, and another cheetah hunting. Again, she was unsuccessful as five ostriches passed and inadvertently chased away the impalas she had been stalking… 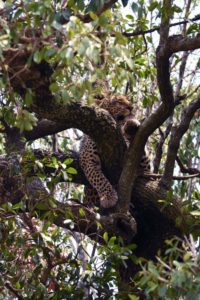 this beautiful leopard was having a snooze 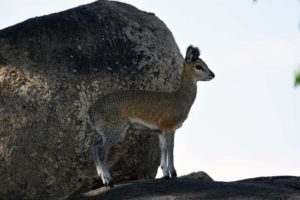 look at how this klipspringer stands on his toes, they are incredibly agile and fast on the rocks

It was time for us to head back to the lodge anyway. One last swim, one last lunch, and then we were packing our bags again. We were driven to the airstrip where we had to wait 10 minutes or so for our plane to arrive. A quick stop in Seronera before flying to Kilimanjaro airport for our connecting flight to Dar es Salaam. Another weekend safari had come to an end. Will you join us next time? 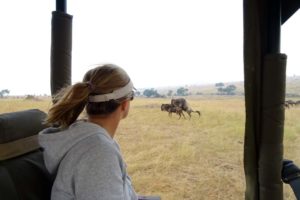 maybe they should book a room?