When friends or family announce a visit it is always exciting. This time after Marjolein and Mel had told us they wanted to visit we received another email from Jo, also wanting to visit on the same dates. So all of a sudden we were a small group, all keen to see a bit more of Tanzania. Jon, Jude and Marjolein had already been to the Serengeti before, but Mel and Jo had never been on safari at all, so we decided to re-visit the Serengeti as it offers first-time safari-goers, as well as die-hard safari enthusiasts, plenty of stuff to write home about.

After all three arrived on Thursday afternoon, the entire team piled into our car for an early morning flight to Mwanza. We were met at the airport by Sifuni, our guide and driver, and without delay we were on our way to the park. We pulled in quickly at the Ndabaka gate (gate for the western serengeti area) to buy the last 3 maps in the shop before continuing to Tabora B gate, close to the northern section of the Serengeti where we had booked our first 2 nights in Chaka Camp.

The game drive started pretty much immediately after entering the Serengeti and soon we were talking about zebras, warthogs, giraffes and a range of different types of antelopes. The cameras were getting a good workout already. Our luck continued with a black rhino mum and calf spotted just before arriving at our camp for the night. 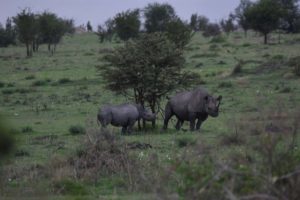 black rhino with calf, she is marking her territory

Chaka Camp is a mobile camp with only 10 tents, meaning it can follow the migration. It is set up in the northern Serengeti each year for the crossing of the Mara River as the wildebeests and zebras head south, and the camp is moved to the Ndutu plains area in November time, ready for the birthing of thousands of wildebeest calves. 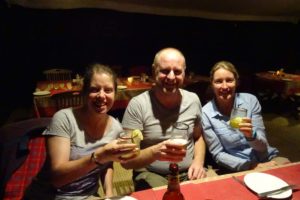 The next morning we all received a 5.30AM wake up call. It was still dark outside as one by one the lights in the tents were switched on and coffees and teas brought in to help us wake up and get ready to roll at 6AM. 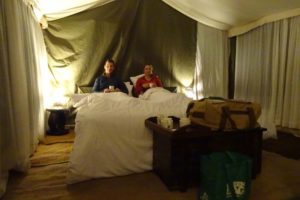 it’s a tough life living in Tanzania, but somebody has to do it… morning tea delivered to your tent before the start of the game drive

It was an amazing day, with the highlight being the crossing of the Mara River of a few hundred wildebeests along with some zebras. We had been lucky enough to see the migration previously, in the Masai Mara – only about 25km north of where we were currently sitting. This time we had a good view of both river banks as they crossed in a bend of the river  – but it was still uncertain whether they would actually cross, as the group were spooked by lurking crocodiles and turned back on a number of occasions before finally ‘going for it’. It didn’t take long before one of the lionesses we had seen earlier came to join the action. She grabbed one of the wildebeests, exhausted from swimming across the strong current, with seemingly ease. A short rest and she went straight back for more, this time a vulnerable young calf that didn’t know what to do when confronted with a waiting lioness. The more experienced animals turned around and swam back, but a few, including this baby, kept going and was no match for the powerful, and probably hungry, lioness on the other side. The chase was brief and the kill quick, now she had 2 meals to defend from hyenas and other predators. 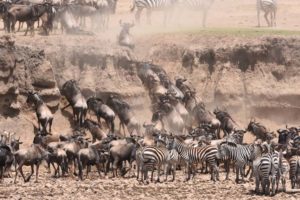 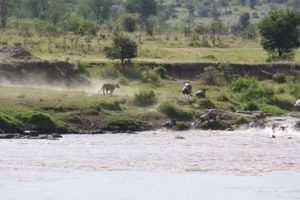 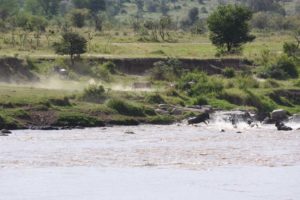 she focuses on one and goes for it 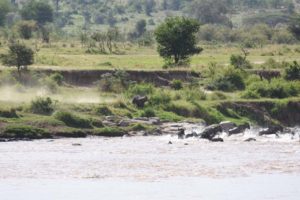 last desperate move by the wildebeest 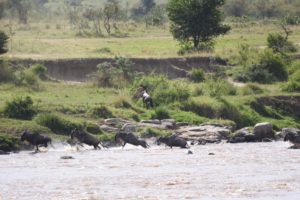 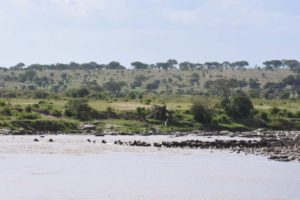 and whilst one of their own is being killed, the rest of them re-start the crossing 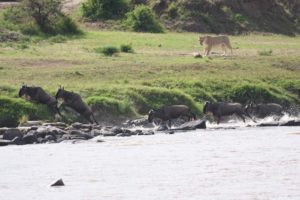 so after a short rest she goes out again 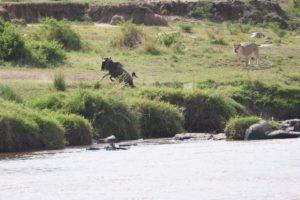 this time selecting a young, unexperienced wildebeest probably tired of the swim across 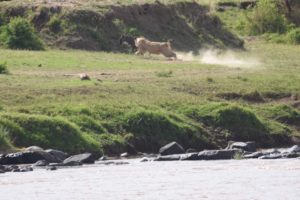 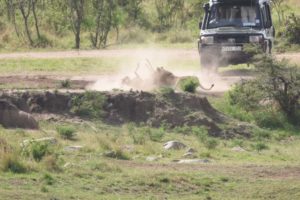 very quickly she knocks him over and strangles her second kill, all within 10 minutes

After all this action we decided to go and have a closer look and when we arrived she had just caught her breath sufficiently to pick up the young wildebeest and drag it to a bush, coming straight towards us! A beautiful sight which made us realise it is pretty hard to move even a young calf when you just have your mouth to carry it. 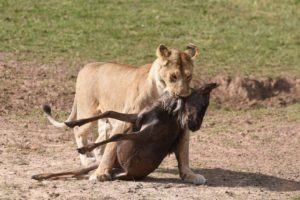 She hid the calf in a bush near us and then came out again to start eating from the first kill. By this time all the other cars had left and we were the only ones watching her. From this distance we could even hear her chew and soon she appeared to be wearing vivid red lipstick, not very neatly applied though…. She was enjoying her meal, but still hot and tired from the kills as she was panting a lot. The other lions we had seen earlier had not even made an appearance by the time we left her to enjoy her feast in peace. 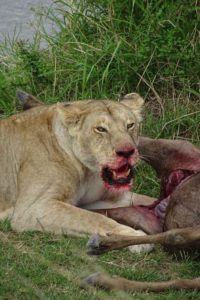 lipstick applied without a mirror, she is eating the larger wildebeest of her 2 kills

After 2 nights stargazing in the north Serengeti, it was time to explore the central area around Seronera and we spent a whole day in the car just to get there. The Serengeti is big! Of course this turned out to be one extended game drive, stopping to watch animals whenever we spotted something interesting. On arrival in the central area our guide wanted to know if we wanted to go straight to our new camp, or if we wanted to check what was around. There were reports of lions and cheetahs nearby, so no points for guessing what we did.

The cheetahs were very interested in some gazelles nearby, but nothing eventuated so, as it was about to get dark, we went home where our welcome drinks were waiting for us. Kiota Camp is a permanent camp and has a great setup with spectacular views and plenty of bush around which means more animals live nearby and roam between the tents. Jude had to wait for some buffalos to move out of the way before she was able to go to the tent one night, and spotted some nocturnal animals, including a white-tailed mongoose, a common genet and an African civet. 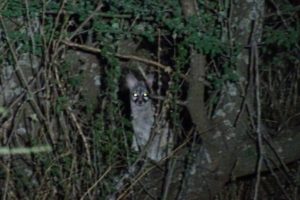 the genet in Kiota camp 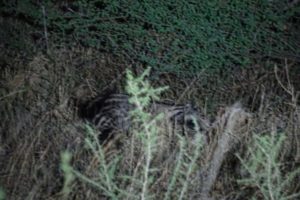 The next day the hunt was on for a leopard in a tree for Jon, and luckily 10 minutes before he was due to fly out we found the leopard high up a tree with a relatively fresh kill. A hyena was loitering around in the area, hoping for some scraps to fall down. After dropping off Jon at the airstrip we drove straight to our second leopard, this time relaxing on a rock in one of the many kopjes. 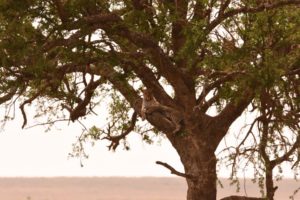 Jon finally gets to see a leopard in a tree, the kill is in there too 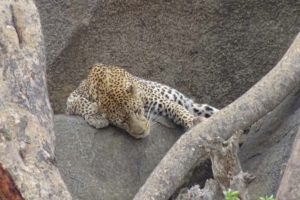 leopard number 2 is spotted resting in a kopje

The area around Seronera felt a bit like a zoo. There are lots of animals around and due to the landscape it is relatively easy to spot the big cats, but there are also lots of cars around and people who seem to tread a fine line between watching and  harassing an animal… We were usually happiest when we spotted our own animals and could watch them without too many other cars around, but seeing the leopards and the cheetahs is of course always a treat. 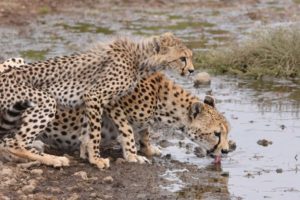 cheetah and her older cub coming for a drink 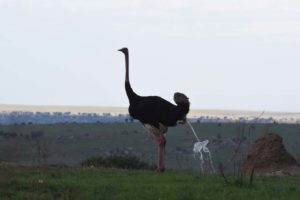 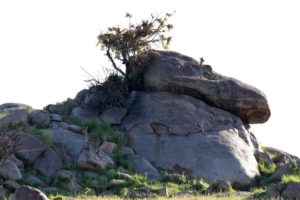 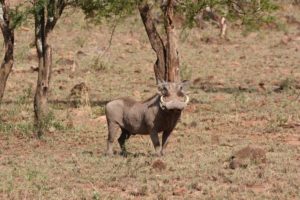 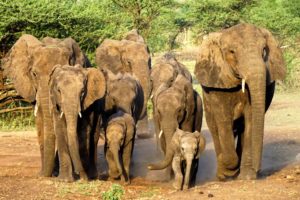 a gorgeous family on their way to some water 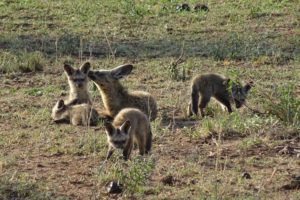 a bat-eared fox family, dad is looking out for any danger

Right until the last minute we kept seeing new and interesting animals, our birdwatching list is slowly getting longer, and we even added some more new mammals to the list. Our drive out took us via another unexplored area of the Serengeti, the western corridor, back to the gate where we had stopped briefly on the way up to buy our maps. From there it was just over 2 hours drive back to Mwanza, a cheaper option than flying directly into the Serengeti. 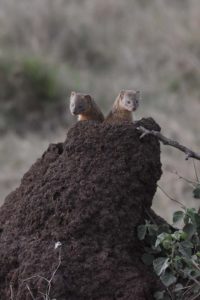 2 slender mongoose peaking up from a termite mount, a new species for Jon and Jude 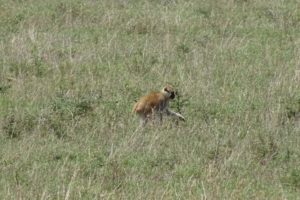 another new species – the patas monkey 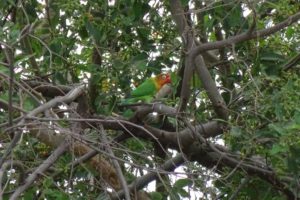 aren’t they cute? they are called lovebirds!