We had been to the Selous a few times, but always to the same location – Lake Manze Camp. We decided to try something new and check out a new area in the Selous. We booked flights combined with a lodge, same kind of deal as at Lake Manze. But instead of a Coastal Airlines deal, this was an Auric Air deal.

Surprisingly though we were taken out on a different airline (Fox, not Auric Air), but we weren’t complaining with two pilots and an empty plane besides the two of us… 45 minutes later we touched down at Sambuzi airstrip in the west of Selous. Cesiar, our driver and guide was waiting with some nibbles and pink bubbles, and with him was Goodluck, the Selous ranger.

Soon we were on our way and spotting our first birds, Cesiar and Goodluck both turned out to be excellent spotters. Lots of vultures had started to circle and one by one they were all landing in two trees on the other side of a small creek. We assumed there was a kill and then Jude spotted a face through the trees looking straight at her. A lioness was her first thought. She walked away immediately after being spotted and we drove around to a location where we could cross the dry creek. When we arrived on the scene we looked around, trying to find the kill. We didn’t see it, but we did find the predator responsible for the puddle of blood we did find – two leopards! We didn’t see the very shy mother, but we did spot the beautiful two-year old daughter. She walked off and we were lucky to see her cross a clearing, we assumed she was heading to the river for a drink after her meal. Goodluck certainly was bringing us good luck! 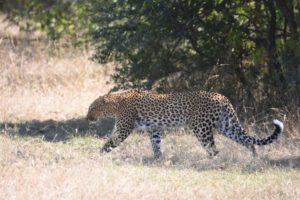 We continued our game drive, finding three lions closer to the lodge and some birds along the way. There doesn’t seem to be much other wildlife here. The lodge, called the Retreat, located partly on the edge of the Ruaha River and partly on the top of a small lookout over the river, was stunning. We were dropped off at our room on the river, a short drive from the area at the top of the hill where the restaurant was. We relaxed on our balcony, enjoyed the spectacular view of the river and then hiked to the top for lunch on the hippo highway (tracks left by hippos as they leave the river every night). 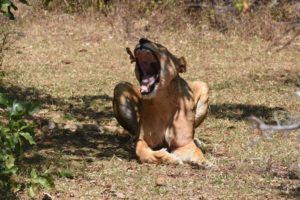 this gran’ old lady is showing a few missing K9’s 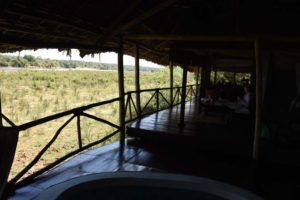 Jude relaxing on the balcony of our ‘tent’ 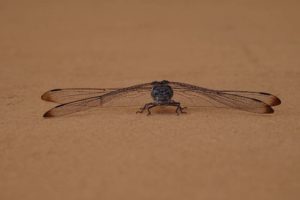 a gorgeous dragon fly sits on the wall beneath us

the view from the restaurant over the river, our tent was close to the river (and you can just see the swimming pool on the right)

Lunch was delicious and with a full tummy we walked back down the hill for a little more relaxing time before our game drive at 4pm. Just before 4pm Jude saw an impala running, shortly followed by a lioness chasing the impala right in front of our balcony! A little later we both saw the lioness walking back after an unsuccessful hunt, but we were very conscious of the fact we had just walked down the hill without realising there were lions in the area!! 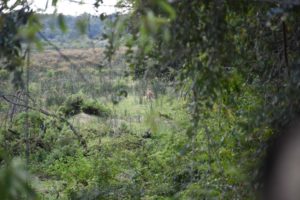 We tried to find the lioness again when they came to pick us up with the car, but she was nowhere to be seen. She could be anywhere in those 10 minutes…

We found some more lions later that drive, but they were just lazing about. Driving down a mostly dry riverbed we disturbed an owl, a new species for us (white faced scops owl). Unfortunately we didn’t manage to catch it on camera, so it doesn’t get added to the list of birds we see for the first time unfortunately. Jude still wonders how Jon could not see that massive owl sitting in the tree right above them until it flew off and it was too late…

We had more success taking pictures of the red-necked falcon, which we can now add to our bird list. Together with the Senegal plover the next day the number of birds we have seen is now at an impressive (we think) 370. 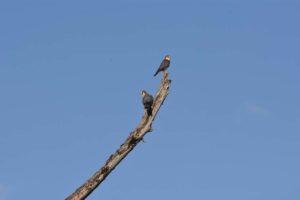 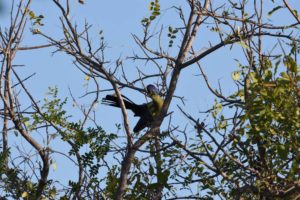 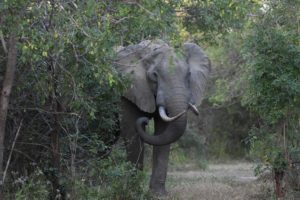 we literally stumble across this elephant, it is hard to see far with this much bush around

We didn’t spot any night animals on the drive back, straight to dinner. They had set up dinner at a lovely spot next to the river with a cozy bush tv already tuned to the right channel, stunning. And with a G&T in hand, stars out above, not a mozzie in sight, we were in heaven. 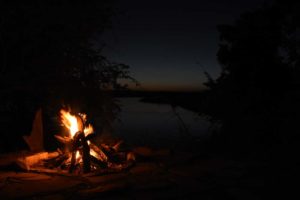 bush tv and the river in the background for dinner – perfect

A large hippo who got spooked by a croc lounging at its exit point from the river had us all laugh, poor hungry hippo. A little later it tried to exit again, but wisely at a different exit point.

Dinner was delicious again, we are going to have to do a lot more exercise during the week now we have a few more weekend safaris planned… they always feed you a lot of delicious stuff at these places. 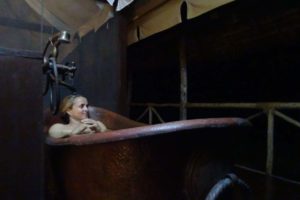 a late night bath together on our balcony, it is great to listen to the sounds of the night from a warm tub

The next morning our wake up call with tea and muffin came at 6am. By 6.30 we were in the car, ready for a long morning drive. We felt the area was a little bit empty as we struggled to find any animals, even birds were hard to find at times. We did spot a couple of lazy, male lions and a few interesting birds. But this area of the Selous just doesn’t seem to have the density of animals we are used to around the lakes. 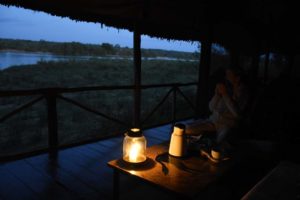 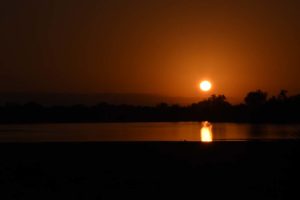 another beautiful sunrise in Tanzania

It was still a lovely morning and lunch was again delicious and with a magnificent view over the river. Unfortunately they moved our flight forward an hour, so instead of leaving at 3pm after a snooze at our room for an hour game drive on the way to the airstrip, we had to jump in the car at 2.45 and drive more or less straight there without stopping. We had one stop at Mtemere airstrip at the entrance to the Selous on our way back to Dar and then we were back home again. Just in time for a smoothie on our balcony with our family of banana loving geckos and a setting sun. What did you get up to in your weekend? 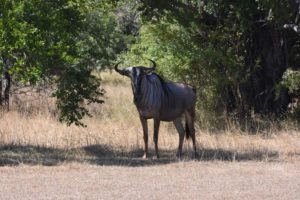 they have the nyasa wildebeest in the Selous, slightly different from the ones you see in the Serengeti