Mountain biking from Kilimanjaro to Ngorongoro

Riding our bikes from Kilimanjaro to Ngorongoro sounded like an interesting challenge, but we weren’t sure about joining the race as we certainly weren’t the pro-riders this was designed for. But after exchanging some emails with Brett, explaining that we didn’t want to compete, but instead just complete the ride, we decided to give it a go.

Frank drove our car (loaded with bikes and other gear) up to Kilimanjaro airport again, where we arrived after a late, delayed evening flight. After dropping off Frank in Moshi and driving to the lodge we realised that Frank still had the car key! How it is possible to drive a car anywhere without the key in it is something we will never understand! But it meant we had to drive back to Moshi with Brett to pick it up after calling Frank to meet us at the same spot we dropped him about 20 minutes earlier…

The next morning we slept in late and enjoyed a leisurely breakfast whilst spotting the first other riders gather outside. We joined them and met the lot before a general race briefing. Then it was time to load up the bikes on the trailer and head over to our first camp location, west of Kilimanjaro. It was a relaxed day which ended around the campfire before we all went to bed with the birds as an early start was planned for the next day.

We drove to the Londorosi Gate of the Kilimanjaro NP at 2250m altitude. Our goal for today was to ride to Shira II camp at 3800m altitude, via the Morum Barrier – our waterstop. We started in glorious sunshine and quickly saw everybody disappear in front of us. We kept pedaling, ever going up, grinding our way around every turn. After some time we passed Jason, also from Dar es Salaam, who had troubles with his chain. We spotted a mouse running across the trail, heard some colobus monkeys in the distance and enjoyed seeing two slender mongoose watching us approach. It was steep in certain sections, but the last 2km before the waterstop were brutal. 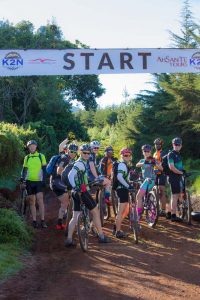 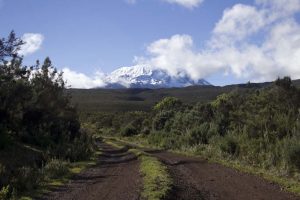 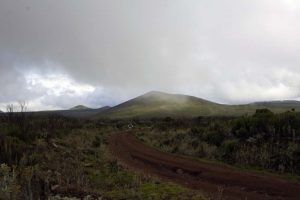 Jon riding up, the clouds are rolling in

After a quick stop to refuel we continued along more open terrain, which had also flattened out. Clouds were rolling in rapidly and we even got a few raindrops on our way up. Again the last kilometer or so was steep, but now we were nearly there so we just gritted our teeth. Just before the heavens opened up, we stepped into the welcoming tent at the finish line of stage one. 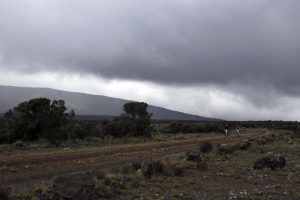 Jon and Jude on the flat section after the barrier, not long afterwards it started to rain 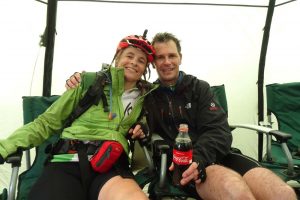 The finish line of stage one was also the start of stage two as we still had to ride down that day! It was very cold now, and after a quick lunch we decided to head down straight away. It was a staggered start so it was just the two of us heading out together again. The rain was quite heavy now and we were shivering, despite the extra layers we had put on. After only 4km or so Jude had a stack which luckily only severely bruised her leg and elbow, so we continued, still shivering. One of the race vehicles went past and Jon stopped them, could we put the bikes in the back please? Turns out his brakes had completely failed and going down Kili without brakes was impossible. Luckily one of the American riders is a mechanic so back at camp (in the sunshine!) he was able to bleed the brakes and add more fluid so we could at least continue with the rest of the race.

The next day was a fun ride through some stunning country, the only low point of the day was Jason being ill. He managed to finish the stage, but basically collapsed after the finish line. Luckily Dr Francis, our excellent medic, was on hand to look after him. He was diagnosed to have cerebral malaria and flew out the next day back to Dar es Salaam, and then straight on to the ICU in South Africa. He recovered well and a few days later he was released. 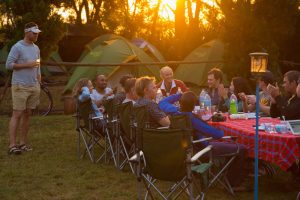 relaxing in the camp before dinner 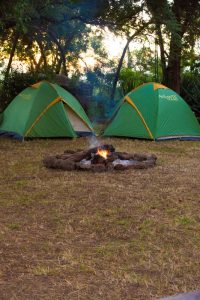 our tents by the fire 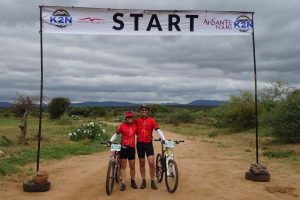 Jon and Jude at the start of day two, an easy day 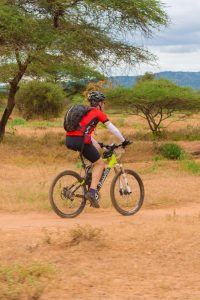 Jon cruising along, the rest of the riders have long left us behind 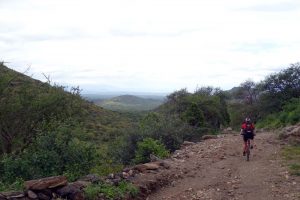 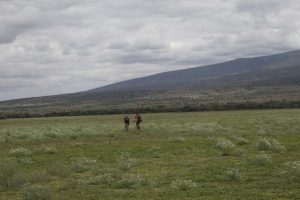 Jon and Jude riding through a field full of plants with thorns (double Gs for those of you who know what they are!), luckily we ride tubeless, as there were so many that you could not see the rubber of the tyre!

In the mean time the race had continued with stage 4, this one had a cut off at 30km. You were not allowed to continue with the last 17km if you didn’t make the cut off… At the first waterstop we bumped into Michael and Antony. Michael is a true gentleman who had kept Antony company until then, but left a cloud of dust behind as he raced off, leaving the three of us to enjoy the next section at our more leisurely pace. 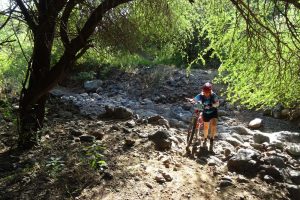 Jude pushing her bike through a rocky creek bed 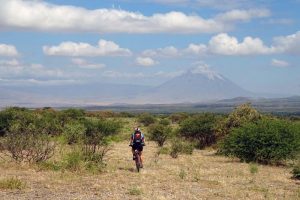 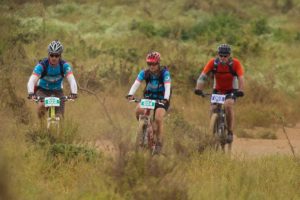 Jon, Jude and Antony getting close to the cut-off point 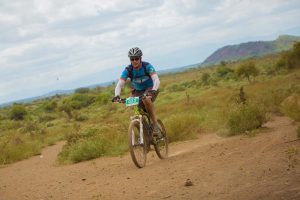 The scenery just kept getting better and better. Ol Doinyo Lengai popped up in the distance, we rode through deserted bush land, passed a beautiful, unknown to us, lake and very much enjoyed following the random line on our gps. We reached the cut off point with plenty of time to spare, but Antony decided to stop there for the day. We pressed on, the scenery was too amazing to stop, we wanted to see the whole course! We enjoyed it very much and made good progress until we hit the last 4 or 5 km. A very long, very steep, very rocky (big boulders!), very scary downhill stood between us and the elusive finish line. We only had one option, hike-a-bike… 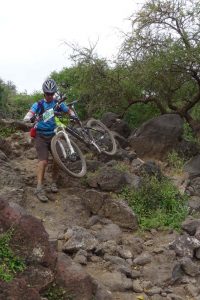 Jon carrying his bike down a rocky section 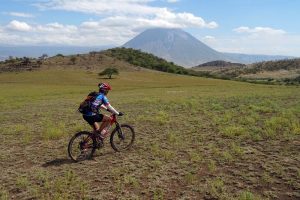 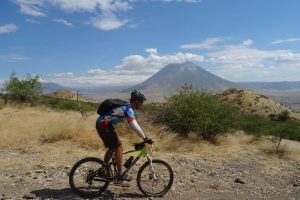 Jon had a serious grump-on, but slowly but surely we descended into the Rift Valley. Once we reached the bottom we bumped into Karel who had been waiting for us for 2 hours with his drone. With his excellent flying skills and a keen eye for the perfect backdrop he managed to get some amazing footage of us riding through this majestic landscape. And then the finish line was there, a very welcome sight after a long day of riding in the heat. Brett, the organisor, and Jason, the logistical timekeeping wizard, were there, as well as Michael who had finished several hours before us. 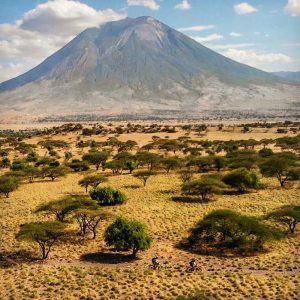 aerial view of Jon and Jude riding through some amazing landscape in the north of Tanzania, in the shadow of Ol Doinyo Lengai

Lake Natron was just to the north of our new camp, and Ol Doinyo Lengai was looking sharp at the horizon to our south. But first we enjoyed a small safari on our drive there. Flamingos, wildebeest, zebras, some gazelles and a nice journey of giraffes, silhouetted by the active volcano Ol Doinyo Lengai. In camp we washed away several layers of dirt and sweat with a well-deserved cold shower and joined the others for a relaxed evening and another great meal cooked by Vincent and his team. 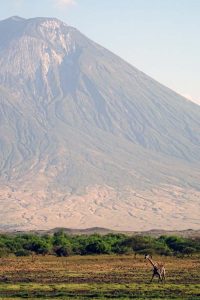 a lone giraffe drinking in front of Ol Doinyo Lengai

Our last stage was the next morning, and for the first time Emy couldn’t plat Jude’s hair as she had a stack the previous day and hurt her ribs. She still zoomed off into the distance, a super strong rider who deservedly won the solo riders category (yes, she beat all the solo men over a 5-stage race). But this day disaster struck her bike when the derailleur just snapped off on the way up a long climb. Michael, again the perfect gentleman, stayed with her and helped setting up the bike as a single speed. 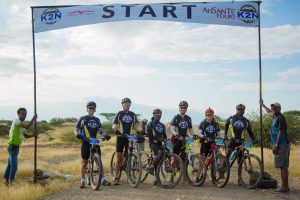 Antony had joined our team again and the three of us rode on to the top and the first waterstop. The course had changed from there into a there-and-back along the Crater Highlands, so we saw Gordon and Thomas fly past, followed soon after by Masolwa and Mahandeka. Masolwa and Mahandeka are some seriously talented Tanzanian riders. They have already raced the Cape Epic together too (and did quite well) and with the right sponsorship they might make it big one day! They had even won stage 4, ahead of the pro-riders. 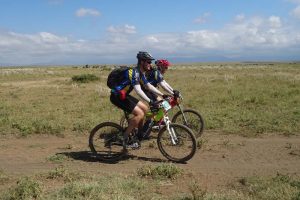 Jon and Jude on their way to the finish line, some zebras grazing in the background 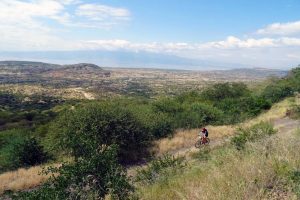 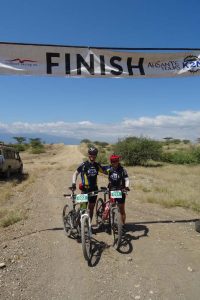 Jon and Jude finish the K2N – highly recommend signing up for next year’s edition, the scenery is spectacular!

Maasai dancers jumped and sang during our last meal together. And after prize giving the Ashante Tours crew had a lovely surprise for all of us, a painting to remind us of the race.

Instead of going to bed for a hard-earned rest after dinner, we grabbed our hiking boots and set off to the top of Ol Doinyo Lengai. Did we make it on time to catch our flight the following day? And why was our driver missing-in-action at the crucial meeting time? Find out in the next episode of lost and found adventures!

If you want to join next year’s race, check out the k2n website and get in contact with Brett. Dates have already been set for 11-14 June 2019.