The migration of the hundreds of thousands of wildebeest and zebra each year is a continuous flow of animals going around in a clockwise circle in the huge Serengeti / Mara area. The most well-known part of that large circular movement is the spectacle of crossing the famous Mara River, full of crocodiles and surrounded by the waiting lions, several times. Facing the invisible crocodiles and the ambushing lions is a risk they take, all in the quest for fresh, green grass. And the young grass shoots of course pops up after rains in a certain area, meaning the wildebeest are always chasing the rains. If they see rain clouds building in the north, they had north. If those clouds start to appear in the south, they head south.

And in the south is where it all starts. Every year, after the rains have fallen on the Ndutu Plains, the wildebeest arrive en masse in this vast open plains area located in the south of the Serengeti NP and the west of the Ngorongoro Conservation Area (NCA). The Ndutu Plains are very fertile, but the fertile layer of volcanic soil is thin and underneath it is an impenetrable layer of lava from Ol Donyo Lengai. This hard layer means trees struggle to bury their roots. And as a result of this, there are no trees in this sea of grass. 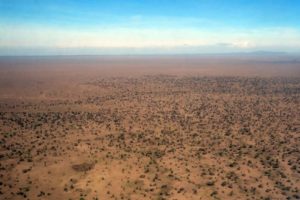 areal view from the start of the Ndutu Plains, you can see where the trees disappear

Each year several hundred thousand wildebeest are born in a short space of time on the Ndutu Plains whilst their mums enjoy the ocean of food. Nature has come up with this clever setup so the predators, who are having a feast in this area during the calving season, cannot possibly kill and eat all the newborns. The number of predators on the Ndutu Plains is limited by the amount of prey they can catch in the rest of the year. And once the young calves follow the long line of slowly galloping wildebeest off the Ndutu Plains, there really isn’t that much left to sustain large numbers of predators.

Because the rain determines when the wildebeest move on to the next area, predicting where the thousands of wildebeest are going to be in a certain month is not an exact science. Knowing somebody in the area would be beneficial, but of course none of the mobile camps, set up for the purpose of tourists wanting to see this spectacle, are keen to let you know when exactly it is happening as that would mean they would be empty the rest of the time… 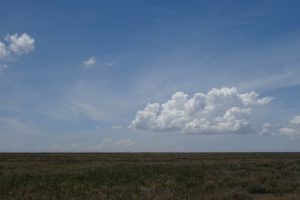 a view from the ground of the treeless Ndutu Plains 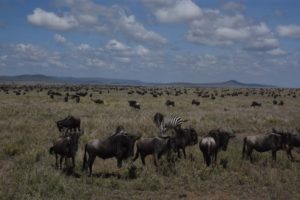 lots of wildebeest, including pregnant females, and a few zebras in the mix

So, we made an educated guess and unfortunately got it wrong. Even though we went towards the end of February, which is supposed to be the best time (January and February are the months when it should all be happening on the Ndutu Plains), we were still too early. The rains hadn’t really arrived at the Ndutu Plains, so the calving was late too. The wildebeest are able to delay the birth up to 2-3 months if the circumstances aren’t right! And if the rains haven’t arrived at the Ndutu Plains yet, they just hold on a little longer or they simply choose a different birthing location where the rains has already fallen.

And that is what happened in 2017. When we arrived on the Ndutu Plains there were definitely several thousand wildebeest, and we also did see some young calves, some still wet and several with the umbilical cord still dangling under their wobbly tummies. But the hundreds of thousands of new calves weren’t there, nor were the million and a half of wildebeest. They were still further up north and would end up giving birth in the Seronera area (the central part of the Serengeti NP) and not even head down to the Ndutu Plains this year, they didn’t even pass the Naabi Hills. It appears the lack of rains, combined with the Maasai people having too much cattle grazing the plains in the Ngorongoro Conservation Area kept the wildebeest away this time. 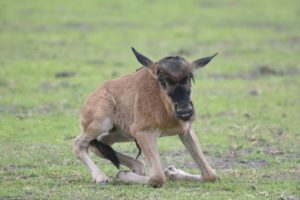 with the umbillical cord still attached, this young wildebeest is learning to stand on his gainly, wobbly legs. He will need to be able to run within minutes of being born 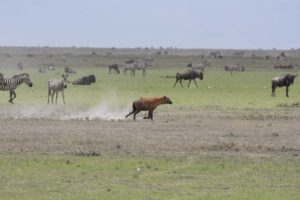 a lone hyena in search of an easy meal 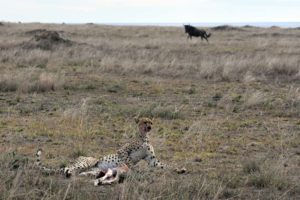 this cheetah reclines after eating his belly full, the wildebeest in the background is still looking for her calf… 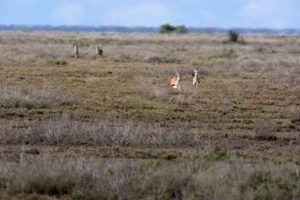 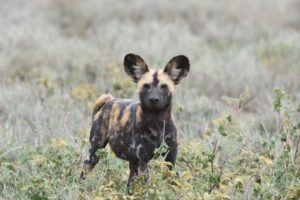 We still had a great safari, watching the usual wildlife, exploring this new part of the world we had never seen before. We enjoyed the new birds spotted and of course watching the leopard coming out of his tree and heading back up again (he had to do a number 2 after enjoying his food). And hopefully we will have another chance to see this miracle of life, part of the annual wildebeest migration, another time… 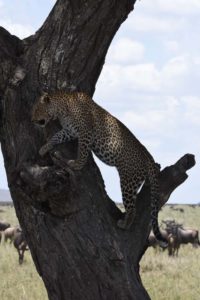 a leopard ascends a tree where his kill is located at the edge of the Ndutu Plains, wildebeest worryingly keeping a watchful eye 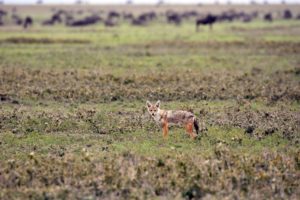 we spot a a golden jackal for the first time 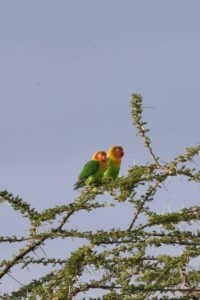 a cute couple of fischer’s lovebirds 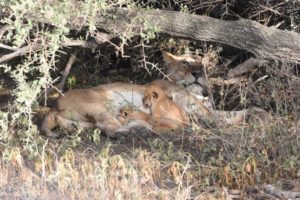 the circle of life – a lioness feeds her 2 young cubs 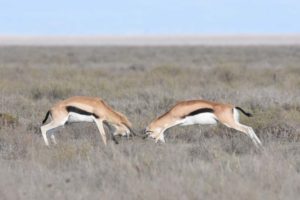 two thompson gazelles having a fight over mating rights