The Udzungwas are part of the Eastern Arc of mountains that run from Mozambique to Kenya, but the majority of them are in Tanzania. We have previously been to the Eastern Usambara Mountains where we went on a ‘different safari’, and also did a hike in the Uluguru Mountains, so we were keen to explore these famous Udzungwa Mountains.

We read about a three-day hike and decided to head over. Esther was keen as well and on Friday morning she arrived at the Circus, packed and ready to go. Due to the increase in villages along the highway it would take us most of a day’s drive to get to Hondo Hondo, so we set off early, leaving Helen & James, who were in Dar visiting us from Nairobi, behind at our place. 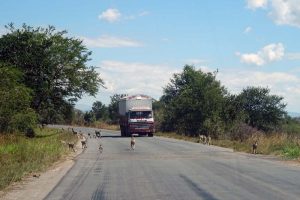 and sometimes the wildlife is on the road, like these cheeky yellow baboons 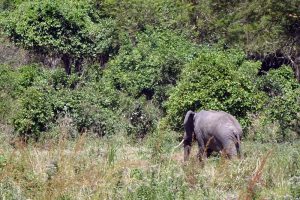 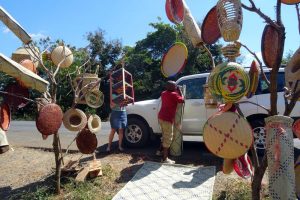 buying some mats along the roadside 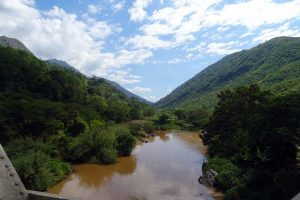 getting closer to to our final destination for this weekend

Again the diplomatic plates meant we cruised through and early afternoon we arrived at a little paradise on the edge of the forest. Yellow baboons were foraging everywhere, and nearly ran off with our handbags at one point, and after dropping off our bags we even spotted the Udzungwa red colobus monkey high up in the near canopy. We happily spent the rest of the afternoon in the bar with a fantastic view of the green carpet covering the hills right in front of us. 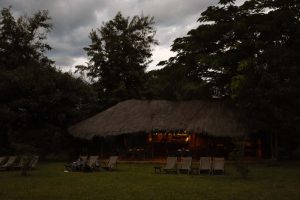 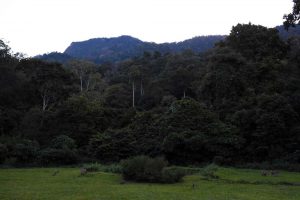 our view from the restaurant and bar area, you could see several species of monkeys from your chair 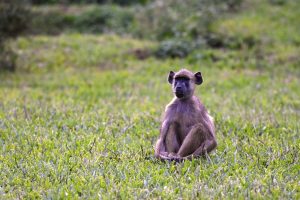 a young yellow baboon sitting in the grass in front of the bar at Hondo Hondo, a little earlier he tried to grab one of our handbags we had put down in the grass to take photos…

At night, whilst enjoying a delicious dinner, we realised how living in Dar has totally unprepared us for a slightly cooler evening. It was 20 degrees, and we were rugged up in thermals, a fleece and a lightweight down jacket. Complete with woolly hat and we were still feeling a little nippy…

Preparations for the hike were easy, we had a cook and four porters to carry all the tents and food up to our campsite for us. We also had a (pretty useless) guide called Ally, an enthusiastic trainee guide (Omary), as well as a ranger called Rebadi who was an excellent spotter. This made a total of ten people (including the three of us), heading up to the GMP campsite, our launch spot for the hike to the top, about 12km from the road. 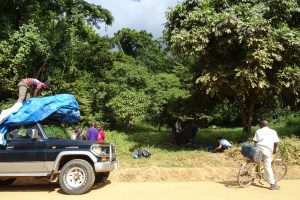 After the usual slow process of registering at the Tanapa headquarters of the park, we set off late morning on our walk. We were to use the Songo waterfall trail to start our hike. We quickly passed both stages of the falls and were getting deeper and deeper into the forest. The trail was very well made and we thoroughly enjoyed our hike as we ambled along.

When we asked around 3pm how far the campground was and were told we weren’t even half way yet, we realised we needed to put our skates on as they clearly had no idea of time-management. Jude went up in front to set a higher pace and not long after was rewarded with a honey badger who crossed the trail right in front of her, not even 5m away. 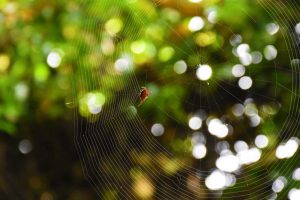 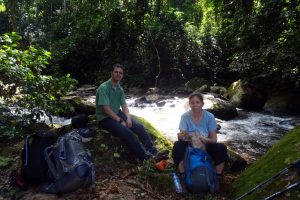 picnic lunch on the way up on day one

Jude, the guide and the ranger on the way up, looking for birds and monkeys 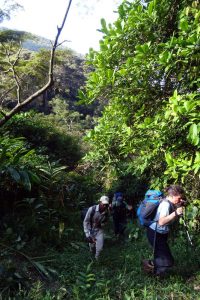 Esther, Omary and Jon zigzagging up a steep section

Several river crossings later, and several 100 meters higher, we arrived in camp. Esther had managed to get a wet boot along the way, but other than that we had survived without incidents. Our porters had just arrived and were busy setting up tents and preparing dinner, but it wasn’t until 8pm that we sat down to a 3-course, delicious dinner. Somehow Sawi, our chef, had managed to prepare the best pepper steak for the carnivores and potato croquettes for the vegetarian, all the way up the mountain in a very basic kitchen. We certainly didn’t regret at that point that we had paid for a cook!

On the hike to the Mwahani Peak and back the next day, we picked up porcupine quills, saw leopard print, elephant poo (lots), buffalo beds (flat areas in the tall grass), hyena poo, and a very fresh, still steaming, leopard poo a few hundred meters from camp on our way back. We also, finally, spotted a few birds, as it isn’t easy to see them in the forest lower on the slopes. We reached the peak around lunchtime and enjoyed our food watching the clouds flit in and out of our stunning view. 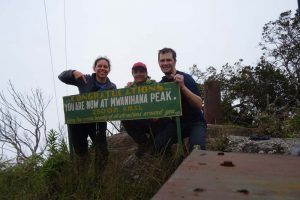 we reach Mwanihana Peak on day 2 just before lunch time 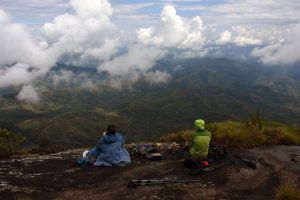 Esther and Jude enjoying lunch overlooking the forrested valleys below 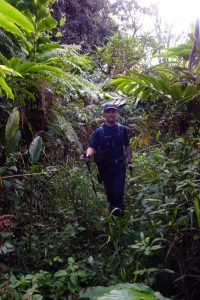 Jon arrives at camp after our summit hike on day two 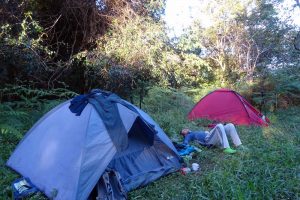 Jon relaxing before dinner at our little campsite

The Udzungwa Mountains are not only known for the hiking though. They are home to 13 species of primates, including two endemics, of which one is their flagship-marketing monkey. The monkey is called the Sanje Mangabey, and we were hoping to see it on our hike. It was only discovered in 1980.

We heard the call, saw the leaves move, but never manage to get a glimpse of the actual animal. We did see yellow baboons, sykes monkeys, Angolan black & white colobus, as well as several sightings of the red Udzungwa colobus, the other endemic species. And we even watched some Zanj sun squirrels on the way down. The amount of wildlife we saw was quite amazing for being on foot. 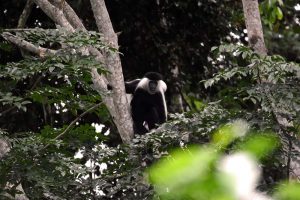 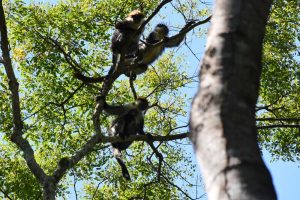 a few of the Udzungwa red colobus monkes looking down at us, baby is carried on the stomach which means it is less than 3 months old 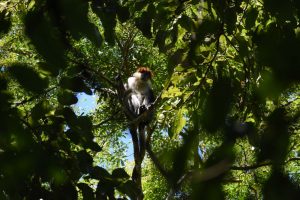 another Udzungwa red colobus monkey, love the blob of spikey red hair on top of their heads 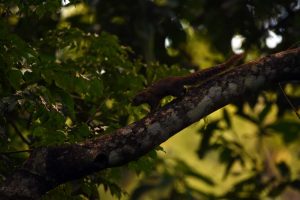 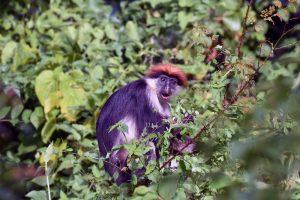 On the way down we had a refreshing swim at the Songo waterfall before a well-deserved, slightly warmer, shower back at Hondo Hondo. It was followed by more monkeys all around us, and a whole family of banded mongoose. It was definitely close to our idea of what paradise looks like.

Having driven around 8 hours to get to the Udzungwa Mountains, we felt we wanted to have another shot at seeing these Sanje Mangabeys. And as one of the two social groups near the park head quarters have been habituated to humans, for research and tourism purposes, we went out for another hike the next day, before driving all the way back to Dar. Which meant we were under a bit of time pressure to find them.

Ally, the same guide with no concept of time, was to take us up the mountain again. What we didn’t realise, is that we were going up to the same height as our campsite on the hill, but in a much shorter timeframe. Jude spotted two mangabeys on the way up. They were from the group that wasn’t used to people, but the two males seemed more occupied with chasing each other, then worrying about a single human on a trail watching them.

Around our turnaround time it was very unclear how far the mangabeys still were. The trackers had found them, and we were with one of them, but the time mentioned ranged between 5 minutes and 45 minutes, and not in a logical order… As we were just about to head down without seeing them, the tracker said he could hear them and they really only were less than 5 minutes away….

This time he was right and soon we were looking at a new species of primate for us. They were very cute looking and busy with finding fruit, spending time both on the ground and in the small trees, and we had a good look at them. Not for very long though, after just short of half an hour with the mangabeys we had to leave them and head back to Hondo Hondo. 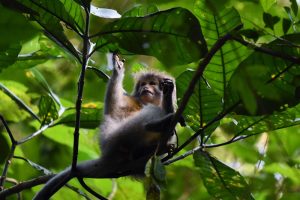 the famous sanje mangabey, a primate only discovered in 1980, endemic to the Udzungwa Mountains 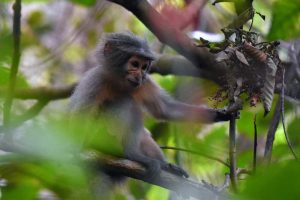 the sanje mangabey spends a lot of time in the trees, but luckily these trees are small so get a good view 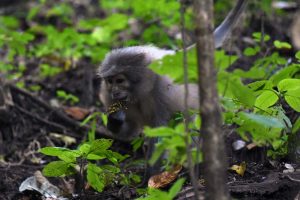 the sanje mangabey also forage on the forrest floor

We jumped in the shower and then started the long drive back to Dar with increasingly heavy traffic as we got closer to civilisation. We’d love to go back there one day, do some of the other hikes on offer, do a birdwatching walk, or float down river in a dugout canoe. Now all we have to do is get some more holidays and find a new friend with diplomatic plates as unfortunately Esther is deserting us… we suspect she got tired of following us up mountains…