We went out at night, torches ready, socks over trousers (to stop the vicious and superfast safari ants crawling up your pants and biting you in places you really don’t want to be bitten) and camera slung over our shoulders. This was our first time out ‘hunting’ for chameleons and Hussein was accompanying us. He didn’t speak much English, but has an excellent eye for spotting the camouflaged critters, hiding on the bushes in the dense rainforest jungle. 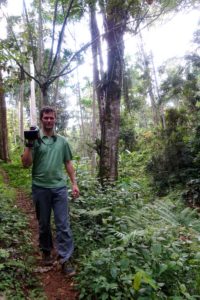 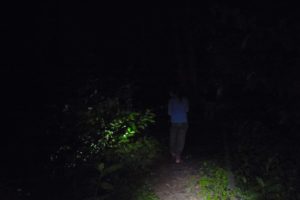 sexy ‘trousers in socks’ fashion. After having to strip pants a few times to get rid of ants in your pants this was definitely the better option!

The chameleons are asleep at night and are easier to spot then during daytime. There are 7 known species living in the Amani Nature Reserve, and there was also the possibility to see the Palm Civet and the Giant Pouched Rat if we were lucky. Amani is in the Usambara Mountains in northern Tanzania, quite a long drive from Dar es Salaam.

The pace is slow, very slow, and we inched our way along the sometimes steep walking track towards the creek in the valley. Very soon Hussein spotted the first chameleon, this was exciting! They have vibrant colours and are very cool. Most kept sleeping, but even when asleep their mouths are turned down at the end giving them a rather grumpy appearance. Totally understandable from the ones that woke up, but a bit unnecessary from the ones fast asleep we thought.

a very grumpy looking male Usambara giant 3-horned chameleon, maybe because we woke him up? 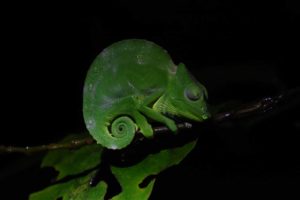 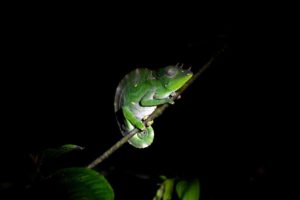 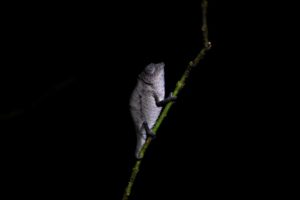 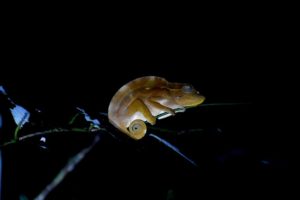 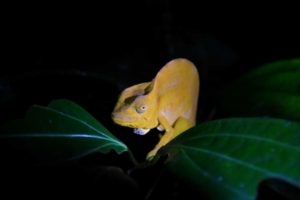 the different colours on the chameleons are incredible and certainly not an indication of what type they are. They change colour depending on their moods, some also change colour to help them deal with changes in temperature or light. 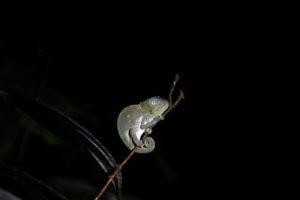 no, not a pygmy chameleon, but a baby Usambara giant 3-horned chameleon 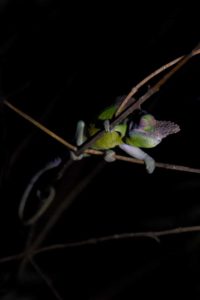 Usambara giant 2-horned chameleon, it’s hard to see as he has them pressed against each other, but there are 2 horns there 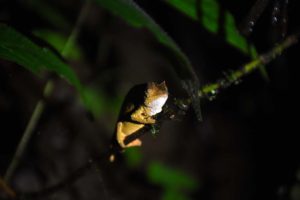 We were incredibly lucky that night. Hussein stopped and said ‘mouse’. We looked up in the direction he was pointing and were surprised to see a more rat sized animal with a very cute face and round ears watching us from above. It sat there for a few minutes, waiting for us to take its picture, before it darted off along the branches deeper into the bush. We could watch it for a little longer until it disappeared. Later, back in camp, we looked it up in the big book of mammals. It turned out to be a Lesser Pouched Rat, which is a type of tree rat. The managers of the camp, Karl and Gail, had never seen one before! 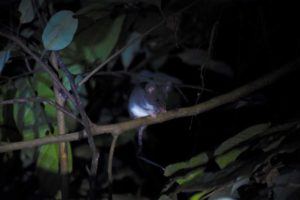 lesser pouched rat, a tree rat. Its bigger cousin (the greater pouched rat) is used to find landmines due to its excellent sense of smell. And don’t they look cute?!

The rest of the weekend we enjoyed our own walks through the forest, the local villages, and tea plantations, tried our best to find some more new birds on a bird walk with John (our guide), relaxed and shared stories with Karl and Gail and of course went out each night to do some more chameleon hunting. Jude got her eye in on the second night and was competing with Hussein to spot most chameleons, as well as tree frogs and wacky insects. 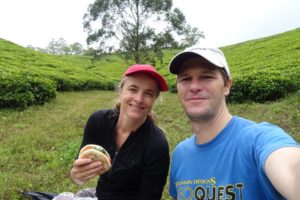 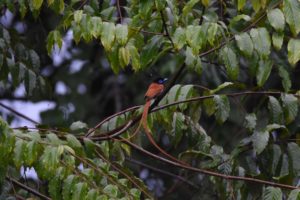 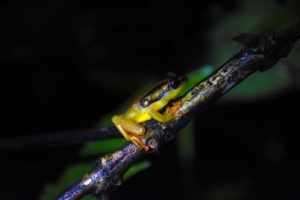 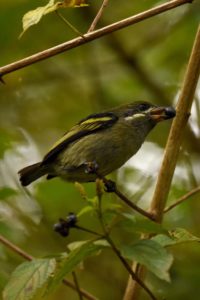 this long-crested eagle just landed after a failed hunt 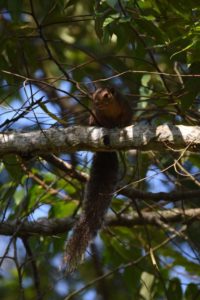 zanj sun squirrel peaking down at us

It was totally different from our usual safaris, where you often sit in a vehicle for many hours, and we enjoyed it a lot. The occasional rain made taking photos a bit harder, but we borrowed brollies from our hosts and managed anyway.

As we headed towards the exit of the Nature Reserve, at the start of the trip back to Dar, we suddenly found ourselves in the middle of what we thought was a war zone. 4 or 5 explosions occurred close buy, but still far enough away not to be too alarming. The second volley of explosions happened when we were standing at the gate to the Amani Nature Reserve and possibly damaged our eardrums. 7 or 8 massive explosions in fast succession probably less than a few hundred meters away. They were blowing up some rocks the guards happily told us. No warning, no protection for anybody’s ears, nothing! At least we knew a war hadn’t started without our knowledge. 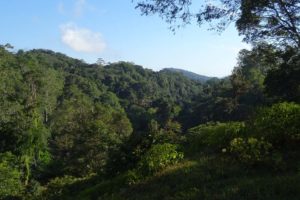 It was a long drive back, but for once we didn’t get stopped by the police and we made it back to Dar safely and before darkness. Hopefully we’ll be able to make it back here again, the chameleon spotting walks are highly recommended! 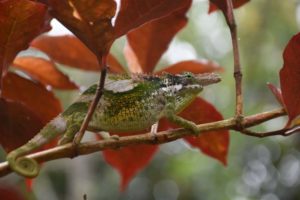