Crossing the ocean once again on a surf ski

All of a sudden it was June, again. How did time fly so fast? Is it because we are rolling from one exciting adventure into another, or is time flying for everybody?

June in Tanzania means the rains stop, it means cooler temperatures (around 28º C) and less humidity. It also means many expats disappear from the peninsula as they take advantage of the long school holidays, and it means quieter roads. But, for us and some other enthusiastic paddlers, it also means it is time again for the annual Stanbic Zanzibar Challenge.

We had not done much training this year as the weeks leading up to June were all consumed with our attempt to get bike fit for the Kilimanjaro to Ngorongoro mountain bike ride (K2N). That left only a few weeks after the K2N where we could focus on kayaking, but we also had some visitors in those weeks…

It sounds like we were making excuses, and maybe we were. But, we entered, last-minute, and just hoped for the best. Would our muscles remember something from a year ago…?

All too soon it was the Friday before the crossing, it had been eerily quiet in the kayak section that day, but shortly after 4pm the air was filled with an energetic buzz. All ten paddlers arrived, plus many of the support crew, including Riet and Nico (Jude’s parents). 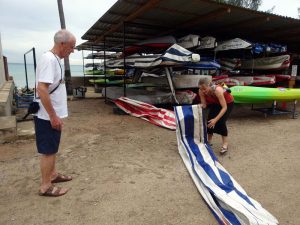 Surf skis were carted around, last-minute preparations made to several, boat numbers were drawn onto the covers, and people were chatting excitedly. Stickers were added, we tied our paddle- and boat leashes to our Epics, and made some minor adjustments to the rudder. Others were also doing some last-minute jobs and then Karen arrived with the sponsored rashies.

We took a group photo of all the paddlers before everybody scattered off, all heading home for a quick dinner and an early night as we were supposed to be on the water at 5am the next morning. 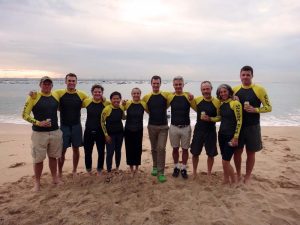 The next morning, still in the dark, Jude helped Riet and Nico jump onto the dinghy so they could be dropped off on Maxan. Maxan is a very large catamaran owned by Erik, a fellow Dutchman who had kindly agreed to look after Jude’s parents during the crossing. It is also the lead boat, which would set the course to Zanzibar. From there Jude’s parents would be able to comfortably enjoy the crossing and see some of the action. 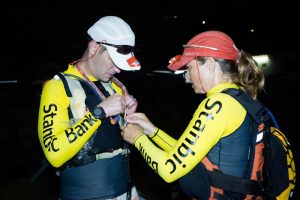 trying to make sure we don’t loose our camera again…

Back on the beach, surf skis were carried to the water’s edge and slowly everybody regrouped on the water. Jude caught a large fish in the breakers, but it was quickly thrown back into the ocean. She then paddled over to Maxan, to check on her parents who were sitting in prime position at the boat’s table in the back, contentedly sipping their coffees. She didn’t have to worry about them… 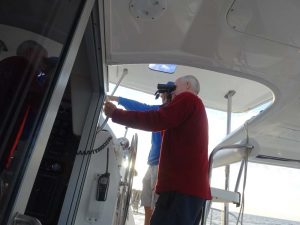 The route had changed compared to last year, and this time we were staying in the shelter of the islands for about 16km before turning our noses directly to Zanzibar. The chop was pretty bad for the first section in the dark, but as the sun rose after we passed Mbudya (one of the islands in the bay) the paddling became easier. We got into a rhythm, munched on some snacks and enjoyed the paddle. 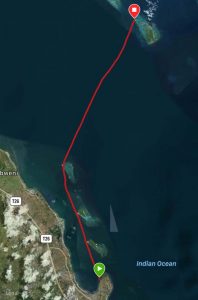 our route according to Jon’s watch, you can clearly see the difference with last year’s route as we stay west of the islands before crossing this time 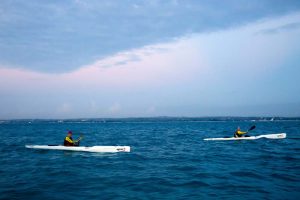 Jude and Jon paddling to Zanzibar 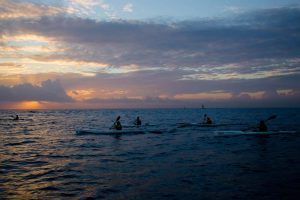 a beautiful sunrise on the water, it makes it all worth while getting up early for 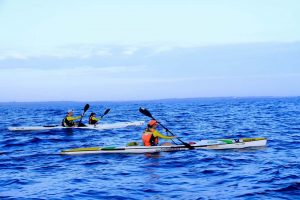 Ryan, Simon and Matt were the fastest paddlers, occasionally even sitting in the wake of Maxan. They were also the only ones who went swimming this year, and they swam a lot. Behind them were Fin and Christian who were zooming along nicely.

We were the next mini batch, chased by Martin. In the back were Rebecca and Karen. Karen was feeding the fish a few times again, but determined to finish this year, which she did.

The swell was slightly lower than last year, and there was also a little less wind, so the paddling was more pleasant for us. However, dark clouds were gathering on the horizon and about 15km from the end we felt the wind picking up and immediately those nasty white caps starting appearing with several waves now breaking. We missed the downpour, and luckily there were no lightning strikes, but the wind was nasty and made the next 10km unpleasant. The wind was still strong when we entered the sheltered area about 4km out from the sandbank. We couldn’t see it just yet, but we saw the islands all around us now. 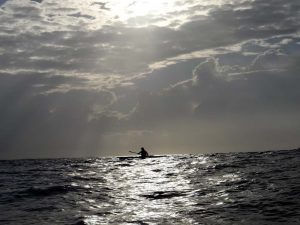 Jude in the middle of the ocean

And then Jude spotted the sandbank, it wasn’t far. Each time we summited a wave, the sandbank was visible for a tantalising glimpse, inching closer and closer with every paddle stroke.

Ryan, Simon, Matt, Fin and Christian, the paddlers who had already finished, as well as Riet and Nico were standing on the sand to welcome us. It felt great to have solid ground under our feet again. We had made it, again! 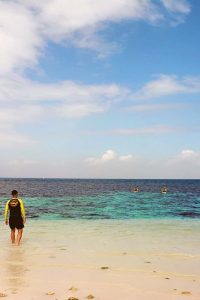 Fin watching Jon and Jude arrive at the sandbank 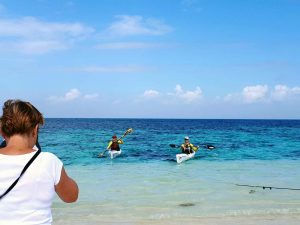 Riet (Jude’s mum) is there to welcome us 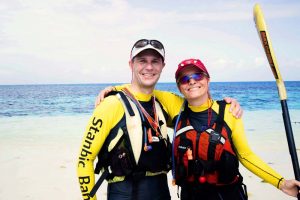 We cheered as Martin, then Rebecca and lastly Karen all reached the sandbank. All ten paddlers had made it, a first in the now four years the event is being held. 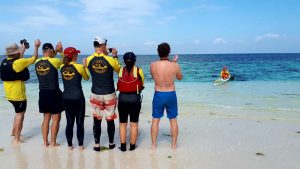 Lunch was already being prepared and the usually quiet and deserted sandbank was now full of people. We had a few hours before the tide would swallow it up again and we enjoyed every minute of it. 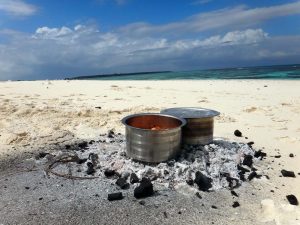 lunch is being prepared on the beach 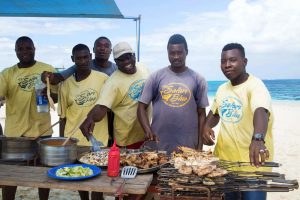 the chefs with the result – a delicious seafood lunch 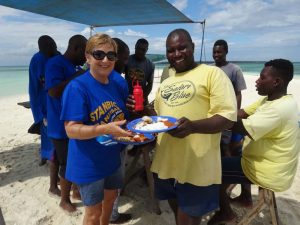 Riet getting ready to have lunch

After thanking the crew for their assistance with some cool aquatic-themed gifts, we continued with prize giving. Jude, again, won the ladies category and took home a brand new paddle. 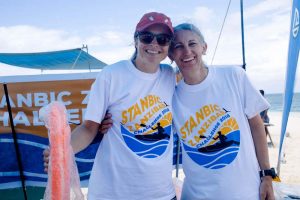 Jude receives her prize from Karen for being first lady 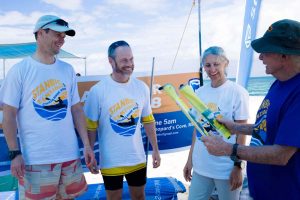 Jon and Martin get their participation award…

After a leisurely and delicious lunch the incoming tide was already encroaching on our space. Tides don’t wait for anything and the surf skis had already been moved to higher ground twice to save them from the advancing water. It is quite tricky to load 10 surf skis (they are longer than 5m) onto a few safety boats, but luckily Bigfoot lives up to her name and is large enough to take nearly all. 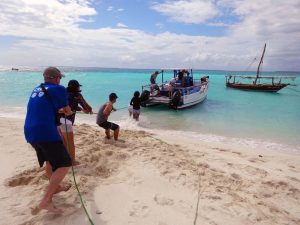 Everybody climbed on board and soon all vessels were leaving the sandbank. Some were motoring back, others hoisted sails to enjoy the slow safari back to Dar. But we (the two of us plus Riet, Nico and Fin) had opted to transfer by dhow to Karamba, a beautiful rustic lodge on Zanzibar, to spend the night and enjoy a well-earned massage.

As there are now boats available for rent for international paddlers (thanks to our sponsor Stanbic Bank), it has become possible to join this fun adventure from abroad. So let us know if you are interested for 2019! 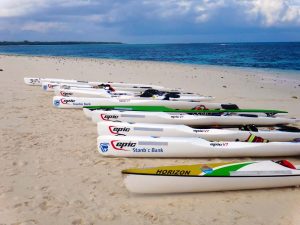 the ten surf skis on Pungume, the sandbank just south of Zanzibar

Ryan and Simon arrived first, with a total time out there of just over 5 hours and 16 min. Their max speed was 15 and 16km per hour respectively. Although they were the fastest, they also made the most stops (swims perhaps?). Ryan stopped 17 times (spending on average of a minute each time) and Simon 13 times (also spending a minute per stop). The distance they covered was 40.45km and 40.62km for Simon, if they could stay in their boats they would get there a lot sooner!

Matt, Christian and Fin were next, with a gap of nearly 3 minutes between Matt and Christian and another gap of 2 minutes before Fin reached land. Matt finished 13 minutes behind Ryan and Simon. Matt paddled 40.15km, Fin’s distance covered was 40.25km, and Christian 40.1km, the shortest distance of all the guys, but still higher than all the girls…! Matt stopped for 6 minutes split over 4 breaks, Christian stopped paddling 7 times for a total of 9 minutes and Fin only stopped 5 times but spent 14 minutes relaxing. Max speed for both Matt and Fin was 11km per hour, and Christian reached 13km per hour.

Then Jon and Jude arrived after paddling 5 hours and almost 50 minutes. Jude’s top speed was 9km per hour and Jon’s was 8. They both paddled almost continuously, with Jon only stopping 4 times for less than 3 minutes, and Jude only stopped 3 times for a total time of 1 minute and 10 seconds (the shortest time of all). Jon covered a distance of 40.22km, but Jude managed to find a more direct route with only 40.03km covered.

Martin arrived 6 minutes after Jon and Jude, had a max speed of 9km/hr, covered a distance of 40.12km, and stopped 10 times for a total time of almost 9 minutes.

Rebecca came in 2 minutes after Martin, and Karen followed 2 minutes after her, taking the total paddling time for her to a few seconds over 6 hours. Rebecca’s top speed was 10km/hr and Karen’s was 9. Both Rebecca and Karen stopped 4 times for around 5 and a half minutes.  Karen only paddled 40.04km and Rebecca managed to duck just under 40km (39.98), making it the shortest distance paddled of all.

Personally I find it really interesting to see all girls paddled shorter distances compared to the guys! If you have a good theory as to why, we would love to hear it! 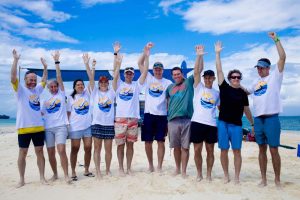