Paddling across to Zanzibar

We can’t exactly remember how we found out about the paddle. But once we knew about it Jude decided to sign us up. It was a little vague at first, with the crossing sometimes being called a race, sometimes it appeared to be more of a social paddle. We joined the whatsapp group first, learning about the qualifiers. As we are usually away in the weekends we weren’t sure if we would be able to qualify, but we were heading out for some training paddles. Trying to spend some hours on our surf skis.

At first a little trip around the moored yachts was enough, but soon we ventured to Bongoyo. The first island in the bay where the Dar es Salaam Yacht Club (DYC) is located. We would paddle across, land on one of the beaches, have a snack and head back. We also enjoyed paddles to restaurants located on the other side of the bay, Velisas (Jamaican) and Mediteraneo being our two favourites. We paddle across, have lunch and head back. Just before the paddle to Zanzibar we even paddled to Mbudya (the second island), around Snake Island and then to a restaurant for lunch before heading back to the DYC. 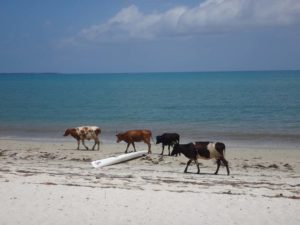 cows on the beach in Dar… 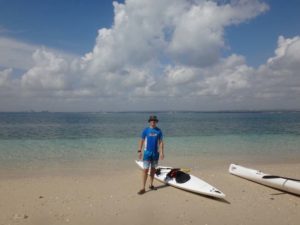 Jon on the beach on Bongoyo Island 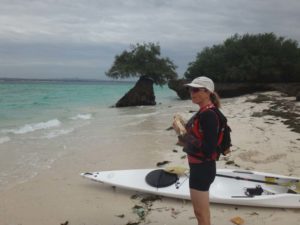 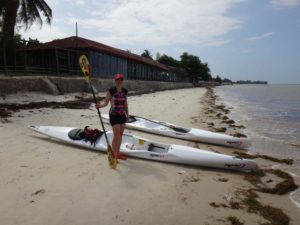 Jude on the beach before restaurant Mediteranneo, ready to head back to the DYC 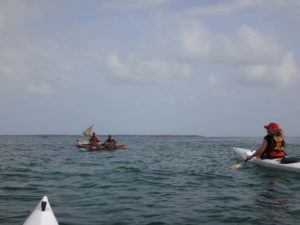 Jude with some local fishermen and a dhow in the bay 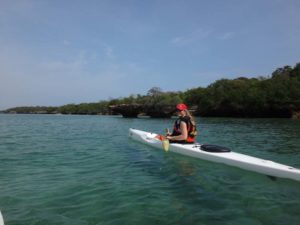 the beautiful waters around Bongoyo Island 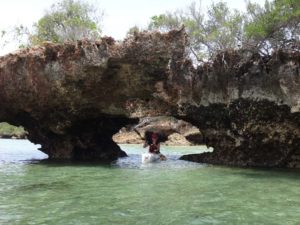 Jude may have gotten a bit stuck on the submerged rocks…. 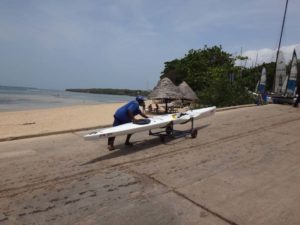 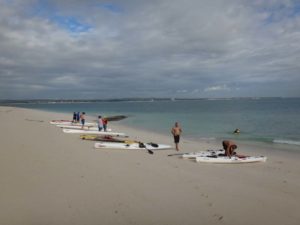 one of the qualifiers, with a short break for a snack on Mbudya island

Somehow we managed to qualify and the whatsapps on the group became more frequent, and longer. After the final safety meeting we all knew what we were in for and the small group appeared ready. There was Megan and Russell in the carbon fibre double ski, Ryan, John and Karen each in a carbon fibre single ski, Fin in a sea kayak, Jon, Jude and Martin in plastic skis (Epic V7s), David and Fulvio in Stealth skis (heavier and wider than the Epics, also made of plastic) and Glenn on a Stand Up Paddleboard (SUP).

Next year they want to make sure international paddlers come across for the event and with the support of the generous sponsor Stanbic bank, a small fleet of Epic V7s has now arrived at the DYC. Let us know if you are interested so we can keep you posted!

The day before the crossing we all met at the DYC to organise the kayaks on the beach, talk through some final points, and give our bags to the skippers who would support us along the way. A whopping 6 boats would slowly motor with us all the way to Zanzibar as safety boats,  each also carrying a volunteer form the recently set up Tanzania Sea Rescue team. The reason there were so many safety boats is that part of the paddle would be in the dark and after sunrise we would split up into different speed groups. 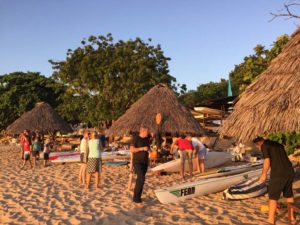 the night before the big day 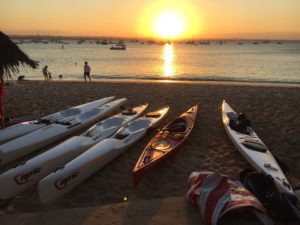 some of the kayaks lined up

The alarm went off at 2.45 in the morning, a ridiculous hour. But we wanted to have breakfast before the driver would pick us up to drop us off at the DYC. We arrived at 3.30 and soon the beach was full of sleepy people trying to finalise everything before hitting the water. 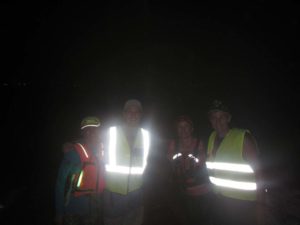 a bad photo of the second pod – Karen, Jon, Jude and Fin

At 10 to 4 we were all floating and on our way to meet Maxan, the large catamaran that would lead us all the way to Zanzibar. And then we were off, sheltered at first by the bay, but soon heading into the open ocean and hitting the waves. The wind was behind us, and so was most of the swell. Unfortunately the wind was so strong it actually created whitecaps and the largest waves began to break. It wasn’t pleasant and Jude struggled not to throw up.

Sunrise came and we had already done a pleasing 18km. Jon took a photo, was hit by a breaking wave, thrown off balance and went swimming. And that’s when we lost the camera 🙁 As Jon hopped back in the strap snapped and down it went. Don’t think we’ll see that one again! (that’s the reason for the lack of paddling pictures of the big day here….)

Karen had been ill the week before and was still taking antibiotics. After all the hard work she put in to get the event organised as well as her training, she decided after throwing up three times before sunrise and feeling weaker every minute, that she would pull out. One down, hopefully none to follow.

As soon as Karen’s ski had been lifted from the water the group split up into smaller groups. Originally we were going to paddle with Karen and Fin, but we soon realised we were still four… It turned out that Martin (also on one of the Epics) had decided to join us.

The fast group with the carbon fibre skis was off, following Maxan into the distance. They had one stop for some breakfast before heading straight to Zanzibar, only stopping occasionally when either Ryan or John went swimming. They reached Zanzibar after just over 5 hours of paddling.

Our little pod was struggling with the waves. Martin fell in a few times even though he was concentrating hard. He only started paddling very recently and did amazingly well. As we were waiting for Martin to climb back onto his ski at some point, Fin decided to empty out a bit of water that had gotten into his sea kayak. He strapped his paddle to the boat, opened the spray deck a little, grabbed his pump and tried to get it going. It was all going rather nicely, until a wave hit him, threw him off balance and over he went… “oh shit” could be heard before he hit the water.

He tried to get back in, but as the kayak was now full of water, rather unstable and the ocean wasn’t giving him a break either, he went straight over again. Jude moved alongside and kept the kayak upright whilst he got back in, emptied some of the water out and zipped everything backup.

It wasn’t far from there to Zanzibar, but Jon had had enough of the breaking waves and was getting frustrated. He had another swim, but thankfully after only another hour or so we reached slightly calmer waters as we were now close to our goal, Zanzibar. 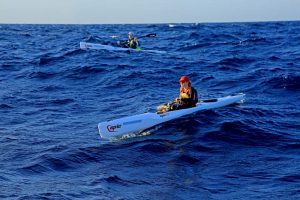 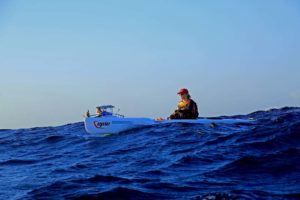 Jude on the paddle across

We hadn’t been able to see Maxan for a while now as the swell was too high, so we were following one of the other support boats called Aldabra. But then, after hours of paddling, we could see the white strip of sand poking up occasionally on the horizon. That was our destination. A sandbank which is only exposed during low tide, giving us a few hours to get there, have a drink, have lunch cooked for us (and eat it!), have the prize giving ceremony, all before the sandbank disappears again underneath the waves.

We had made it! Mari came out to greet us in her ski, she had been on Maxan looking after the first paddlers all the way. The four of us reached land together and were greeted by the smiley faces of Megan, Russel, Ryan and John. Some of the support crew were already there too and soon we were cracking open the beers and ciders to celebrate our successful crossing! 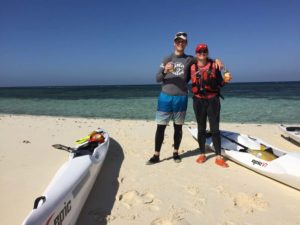 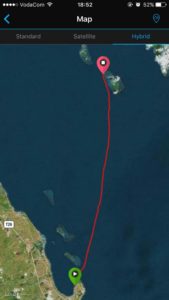 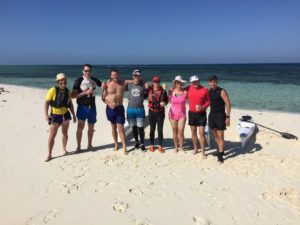 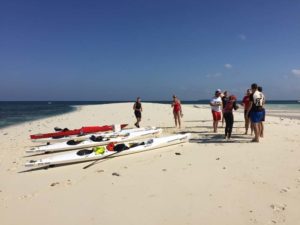 milling about on the sandbar, waiting for the third pod to arrive

Behind us in the last pod the battle was still ongoing though. With Glenn possibly setting a world-first if he managed to get across on his SUP, we were all keenly scanning the horizon for the tiny figure standing on top of his board. And then we saw him, he had made it! Fulvio and David also came into sight and the group was complete again. 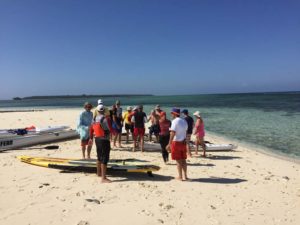 everybody has made it!

On the crossing Glenn had many swims as the ocean was rough. David claimed he had counted 51. Glenn had used a routine where he would sit on his board and paddle (very awkward on a SUP), then get onto his knees (protected by some pads) before standing up until he was thrown off by the waves again. And then the cycle would start all over again… But he made it, and might now get a mention as the first SUP to paddle from Tanzania mainland to Zanzibar in some record book!

Jude won first ladies in a single boat, the prize being a locally made trophy and a voucher for dinner at the Grill House (a steak house…). 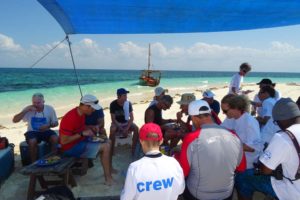 enjoying a fantastic lunch, cooked on the sandbank 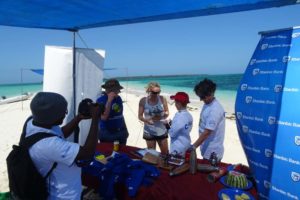 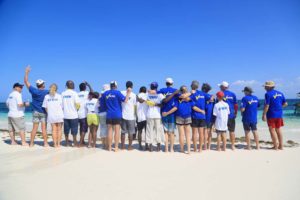 most of the crew, blue shirts showing ‘done’ on the back 🙂

When the tide came to claim back the sandbank, most people went back to Dar es Salaam on the safety boats (including all kayaks and skis). But we went to Fumba Beach Lodge together with Fin and Anne for a well-deserved massage and some diving before we returned with the normal ferry the next day.

Maybe we’ll paddle together next year? Who is keen?! 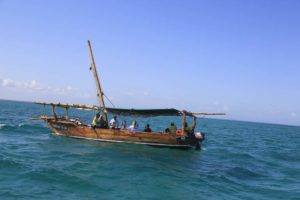 Jon, Jude, Fin and Anne on the dhow for a relaxed weekend on Zanzibar after the crossing