At Jon’s work, the meetings with the government have started again, and this time they were held in Arusha. The plan is for this to occur every month. There is a schedule, but of course the government won’t stick to the schedule so planning anything is utter chaos…

The meetings go from Monday to Sunday, which means we will have one weekend before they start each time to explore the north of Tanzania. This first time however, we were coming back from Kilwa on Monday evening, and the meetings started on Tuesday (the government team realised very last minute they didn’t want to work on Easter Monday). So we flew up to Arusha on Monday night.

As Jon was busy from early in the morning until late at night, Jude joined Brett and his family at Simba farm. A working farm with accommodation and good food where Brett, Christie, Baylor, Harper and Cohen were staying for nearly a week to explore new routes for the K2N race that Brett organises. After meeting at the petrol station in Longido (a small town on the way to the Kenyan border, about 1.5hr drive from Arusha), Jude hopped into the car for the last stretch to the foothills on the western side of Kilimanjaro.

After a delicious dinner and a night spent in the quaint and comfy old dairy room, Brett and Jude were picked up by Noel and Hamza from Ashante Tours. We were driving up to the Londorosi gate of Kilimanjaro NP and then on to the helicopter platform where we finished the first stage of the K2N race last year. From there Brett was going to try to ride a trail back to the Morum picnic site on the Shira plateau at 3470m (the location of the waterstop last year) and Jude was going to run it. Noel, our ranger and a park warden were walking and both Noel and Jude were taking photos and video of Brett riding as they want to use it in the promotional material. It was a stunning high-altitude run. 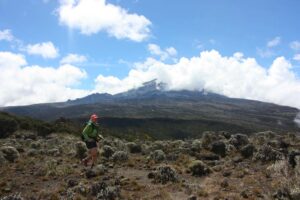 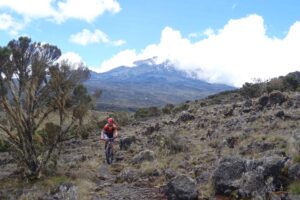 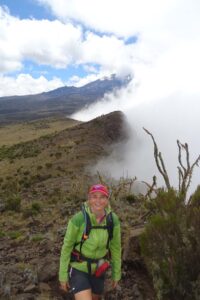 First though we had to deal with the usual BS from the officials at the entry gate. Despite the fact Jude is a resident of Tanzania, and has the stamps in her passport to prove it, they wanted to charge tourist rates as, according to them, the stamps in the passport weren’t proof… ! They needed to see the work permit. After a long argument we were allowed through, leaving Jude’s passport behind, with the promise we would show them the permit on return. Jude was allowed to use their wifi to send Jon a message requesting he send it asap. The manner at which the Tanzanian government is trying to get money is getting more desperate every minute…

The run was great, and the scenery, as always, spectacular. The riding was challenging though and will add some hard work to the first stage of this year. Jude was glad it wasn’t part of last year’s K2N race. It’s a little over 11km back to the water stop, but Brett also checked out another trail that joins the main road a little earlier to possibly cut out the last, tough section. Funnily enough the signs on the track show it is a mountain biking trail!

Back at the farm we had the soup from lunch to warm us up, and then joined dinner with the whole family. Jude slept well that night.

The next day we drove to a corner of the farm with two bikes in the back, from where Brett hopped on the back of a piki piki (motor bike) to see if he could find a trail from the farm towards Longido. Noel had already found most of a trail, but we needed to ride it all, check it was ok, and find the last missing bits. We would all meet at Sinya, a small town inside the Enduimet Wildlife Management Area. More BS as we spent an hour at the gate trying to get in, despite the fact that Noel had paid for all the right permits back in Arusha, but they had failed to give him the right bit of paper… 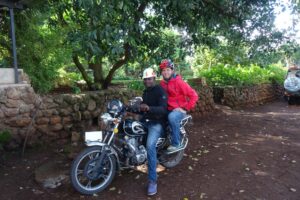 Eventually we were on our way, and met up in the little village. From there we drove towards Longido on the trail found by Noel, until Brett and Jude hopped on the bikes and rode the final 20km into Longido. We lost the car at some point as it couldn’t pass some washed out gullies, but we luckily found each other again (we had not taken a phone as we thought the car was going to be with us the whole time). Brett then rode the first section (Jude had a puncture that couldn’t be fixed right there), and then we tried to find the last missing kilometres to the farm. We got to within 5km and then had to turn around. It was already dark, and there were no tracks for cars to get through…. It resulted in a nearly 2-hour detour and we finally arrived at the farm around 9pm! 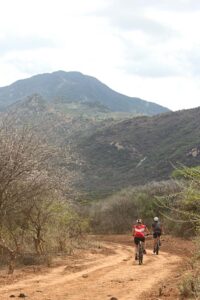 Jude and Brett riding towards Longido 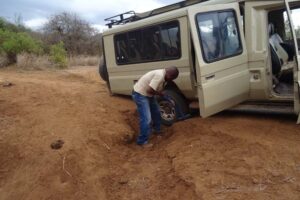 the car got a bit stuck at some point 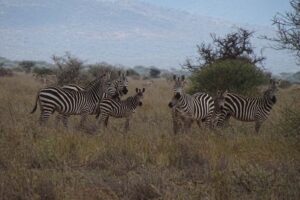 more wildlife along the trails, we saw loads of game animals on our ride 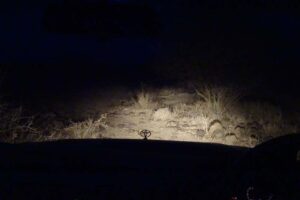 and then you run out of track for a car about 5km from Simba farm…. it resulted in a 2 hour detour to get home

As it is a working farm Baylor, Harper and Cohen wanted to milk the cows, so we agreed to meet in the stables at 7.30. The first time we went, they had already finished all the milking, but the second day we were lucky. One of the cows with a young calf still needed to be milked. The kids were a bit hesitant and only Baylor dared to give it a go, but Christie and Jude both attempted to get some milk out and were (with a bit of help) quite successful. Brett went out on a piki piki to find the missing link of 5km and was back for a late lunch after a successful mission. Jude played tennis with Christie that morning, and with three kids who wanted to fetch balls, it was quite enjoyable. After lunch we all went for a walk to the river, it was supposed to be a pretty decent walk, but the river ended up being just 15 minutes away. The kids played in the river, in the water and with the rocks. 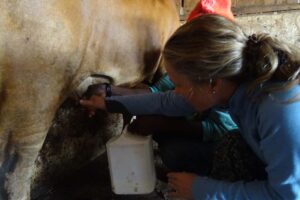 Jude adding some milk to the bucket 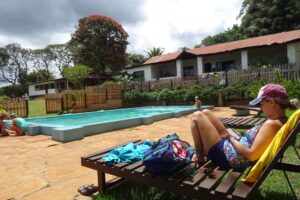 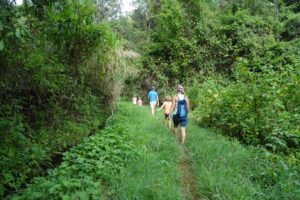 the whole family on their way to the nearby river 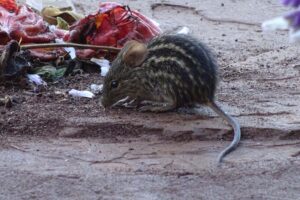 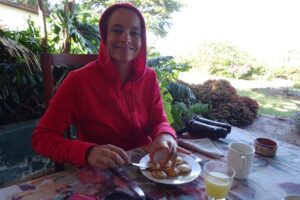 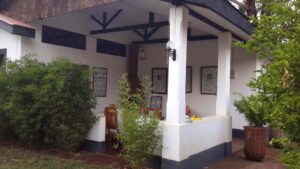 lovely outdoor area where we had meals occasionally

Jon arrived later that night by taxi, and joined Jude for a late dinner. We enjoyed a relaxing day, going for a walk, playing with the skelters and sharing lunch. And then it was time to head back to the airport. It had been a great week, a nice change from Dar with cool evenings so you can snuggle underneath the thick duvet. We loved it and are looking forward to some more trips to Arusha. 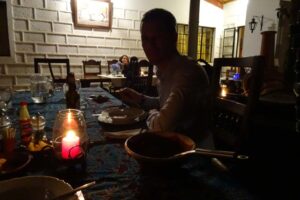 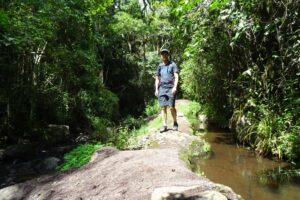 Jon at the nearby river 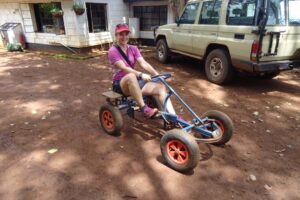 Jude having a go on the skelter 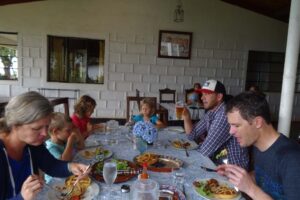 all sharing lunch at Simba Farm, it was wonderful to be part of the family for a few days 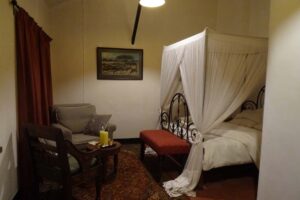 Jude’s room at Simba farm, as the nights are cold it was lovely to snuggle up under the duvet