Settling into life in Australia again

Upon arrival in Brisbane we were given a one-bedroom apartment at the edge of the CBD until our things arrive. It’s a nice place with great views and Jon can walk to work, which he loves. 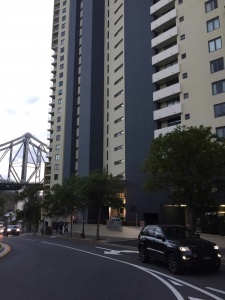 our new, temporary abode in Brisbane 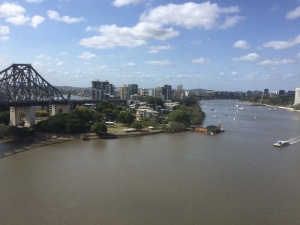 this is our view from our balcony on the 14th floor 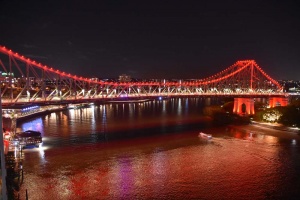 the Story Bridge at night, it is lit up in a different colour every night, or sometimes multiple colours

We enjoy the simple things again, like walking home after a meal out, supermarkets full of food, libraries and good bookshops, cars and trucks that don’t hoot as they drive past you on your run, hot water almost immediately out of a tap, being able to order something online and have it delivered to your door, a shower that works without having to press buttons located on another floor, not having to pre-purchase our electricity and making sure to check your box to see how much is left to ensure you don’t run out, being able to fill up the car and pay with credit card instead of carrying wads of cash (the largest Tanzanian note TZS10,000 is worth approximately AUD6), being able to drive on a road without constantly swerving to avoid the potholes, being able to fill up your drinking bottle straight from the tap, being bitten by mozzie and not have to worry about malaria, denque fever, chikungunya or other diseases transmitted by mozzie bites, driving past a police car without being pulled over for tea-money,  going for a walk by yourself (without having to pay for a guide) anywhere, and have loads of information available about the walk and the flora and fauna you can find there, and of course catching up with lots of friends and the regular Tuesday night runs on Mt Coot-tha followed by potluck dinner. 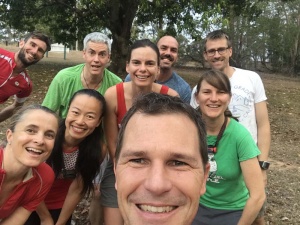 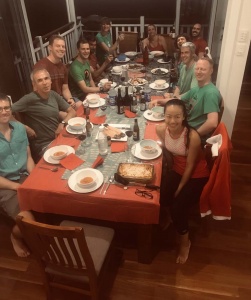 In the first few weeks back in Australia we manage to go camping one weekend, fly to Adelaide another weekend, spend a week in Perth, go canyoning up the coast, and meet up with lots of friends during the weekdays for dinner catch ups. After Mt Coot-tha we now all head over to Chantel’s place for dinner. We catch up with old friends and meet some new faces too. Before we realise it, the Christmas period arrives and we fly to Europe for two weeks, where we celebrate Jude’s parents’ golden (50 years!) wedding anniversary.

Then, two and a half months after arriving in Brisbane (mid-January), our airfreight also finally lands. We are still in our one-bedroom apartment (we have several boxes and crates now piling up in a corner of the apartment), but we now have two mountainbikes, our own tent and all other things required for a weekend of camping. All apart from a car…

So, long overdue, we finally set out to view some cars in 2020. The first few months had been taken up pondering which type of car to buy, but we finally settled on a Nissan X-trail. And thus, one Saturday morning we set out to find one. We picked up a rental car and drove to our first garage. Did the obligatory test-drive and looked under the bonnet. We liked her. We didn’t want to succumb to the car salesman pressure (there are 3 more couples viewing today) and set off to check out the second one on our small list. It was an hour’s drive and when we got there we realised the first one had been much better so partway through the test drive of the second one we called the first garage to put an offer in. Turns out, once you know what you want, it is not hard to get one…. We are now the proud owners of ‘Skinky’ (a sluggish grey-blue Nissan X-trail). 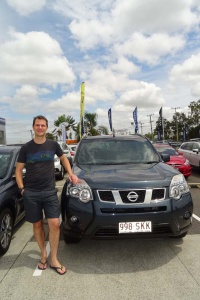 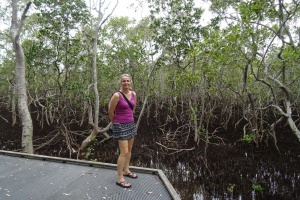 After spotting some amazing spiders plus a few more birds it was time to sign the contract for the car on the way back to Brisbane. Unfortunately an accident had happened and all 4 lanes on the motorway were closed off, forcing us onto the smaller backroads together with hundreds of others. We didn’t make it, but had paid a deposit already so we weren’t too fussed. 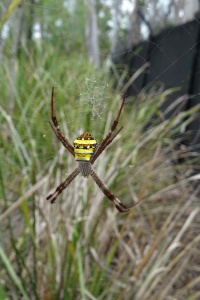 The next day we went on some hikes in Tamborine NP. It is Queensland’s first national park and is made up of lots of small areas with short walks. Perfect for us at the moment as we are still recovering from our colds we picked up in Europe. Our first walk was in the Knoll section. A short 2.6km trail called Sandy Creek circuit. We had brought our camera and were on the lookout for birds, not easy in this dense rainforest! 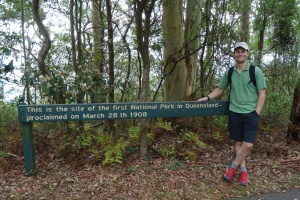 Proof this really is the first national park in Queensland

We spotted a few, but when we sat down on a patch of grass near the carpark for our lunch we realised some of the birds were very easy to spot as they came to check out the lunch area for food… We saw several pied currawongs, a spangled drongo, and a male and female satin bowerbird, but we didn’t see the laughing kookaburra until Jude’s sandwich was in his mouth as he landed right in front of us with it, enjoying the Dutch cheese! It is incredible how silent they are when flying towards their ‘prey’. Magpies and a lace monitor also came to check out if the kookaburra had left some crumbs. 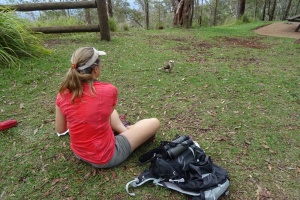 Jude looking at the laughing kookaburra (aptly named bird!) as he is eating her sandwhich he swooped out of her hand 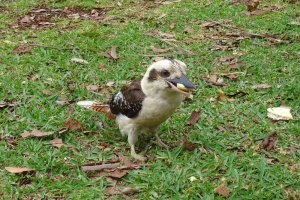 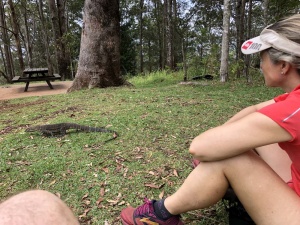 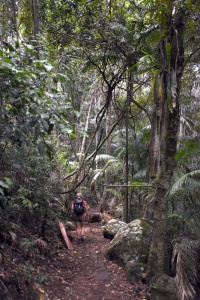 Jude on a hike in Tamborine NP 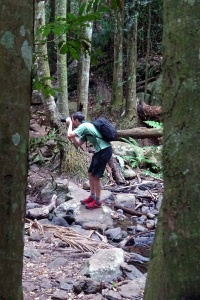 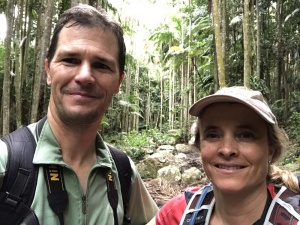 Jon and Jude in Tamborine NP

A few days later we picked up our car, we are now fully set for adventures again, watch this space!