It was Jude’s parents’ time to celebrate as they had been married to each other for 50 years on 30 December! It’s a long time together and it’s great to see they still enjoy being together after all those days, weeks, months and years. They have their own hobbies, so they spend some time doing things individually, but a lot of things they do together. Would that be the recipe for success in a relationship? 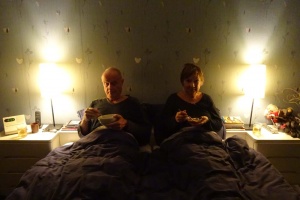 Months before, Jude had decided what present she wanted to give her parents for this special day, a photo book about them and their lives together. It meant many months of work, starting with going through all photo books, page by page, and selecting the photos she might use. Then, with the help of Nico (her dad) and Riet (her mum), each selected photo was removed from the album, scanned, and re-glued back into its original place. This would not have been possible without their help!

Photos from the 40’s all the way to 2007 had to be done this way as mum and dad didn’t enter the digital-camera age until 2008. The digital photos (from 2008 – 2019) could all be copied into Dropbox which meant Jude could access them in Tanzania, download them to her computer and make a selection. Once these two massive jobs were done, the actual work began of deciding which ones to actually use, edit them in Photoshop, and add them to the anniversary photo book. The photos from the 40’s to the 90’s all needed touching up. Some were printed too pink, others too yellow, or too dark, lots had dust spots on them and quite a few benefited from sharpening. Most had a combination of issues and the editing took a while.

Adding the photos to the book and styling them was the fun part, adding the text sometimes making it difficult as stories had to be discovered, people identified, and locations researched. It made for a mammoth task. But, after months of work, the final result was stunning and certainly well-received and much-admired by many at the party.

The printing process added a lot of stress as Albelli didn’t deliver the photo book before christmas even though the book had been submitted 4 days before their christmas deadline. But, all that mattered in the end was that it was on time, delivered on the last possible day before the anniversary… about five minutes before the end of the deliveries…

On the actual day Jon and Jude went to the location a few hours before the start of the party. Sandra (Jude’s sister), Peter (brother in law), and nephews Jessie, Niels and Jens had already arrived and were busy decorating. Balloons, bunting, and some ’50 years married’ signs were placed around the restaurant. But the most impressive bit of the decoration was the ginormous golden frame Peter had made from wood and sprayfoam. It looked amazing and even had 2 handles at the back so people could easily pick it up. We wanted to use it to frame people in photos and tested it with a few photos of ourselves. It proved a big success and we managed to get about half the guests in the frame at one point or another during the party (see below).

After setting up the large screen, we tested the slideshow with photos, it all worked and they proved quite popular. We placed the big inspirational poster for Iceland behind the big jar for envelopes, we were ready for the masses… 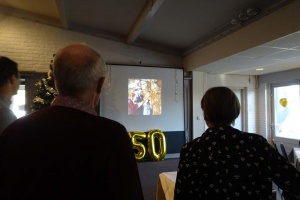 Nico and Riet watching the slideshow 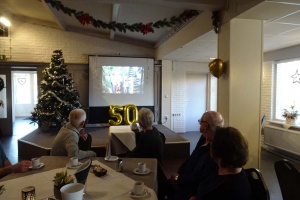 everybody seems to enjoy watching the slideshow

But first we went home to officially congratulate mum and dad and give them their presents. Sandra had made an awesome wooden plank with beautifully written text on it, covering all the important bits of their lives. It is stunning. It accompanied the 2 funny sleeping hats that symbolise a long weekend away to the Efteling. 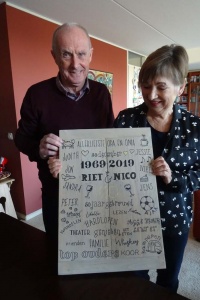 Then it was time to head back to the party location, we wanted to make sure we were there before the first guests arrived. Mum and dad walked over, and we drove the two cars across. It wasn’t far and we all arrived at the same time. We all enjoyed a cuppa with cake, specially made for the party, and then the first friends and family members arrived. 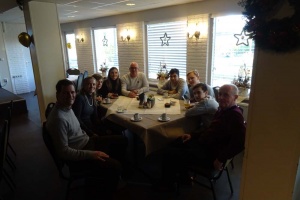 And before we knew it, a queue had formed to congratulate Nico and Riet. Many friends live in Bergen op Zoom or the towns around it, but others had come all the way from Den Helder (Rien and Nel), Oost-Souburg (Jan, Annie and Theo, Klaas and Ella), Belgium (Sepha and Jacques, Miranda and Stef), Tilburg (Sandra, Peter, Jessie, Niels and Jens, Angelique), Oisterwijk (Ans, Claire and Ronald), Alblasserdam (Hans and Dini), and of course Jon and Jude from Australia… 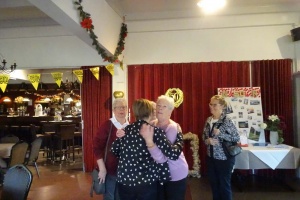 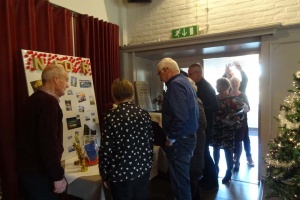 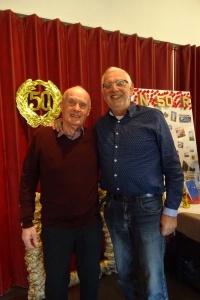 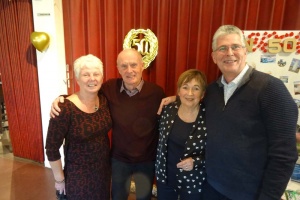 Riet (in the middle) with Jaantje and Mieke, more friendships of a lifetime 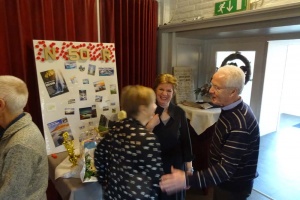 some people didn’t have to travel far… 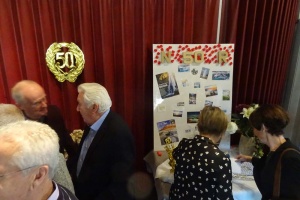 others have crossed borders to be here today

After several hours of partying, and the family singing a special song written by Tessa (their god daughter) for Nico and Riet, friends all said goodbye and dinner was served to the family (brothers and sisters and their kids). The food was amazing and there was lots of choice. We all tried our best to finish it! Plenty of drinking and laughing followed until slowly everybody went home. It had been a great afternoon and evening, it was time to take down the decorations, find a place for everything in the cars (luckily Ivan and Yvonne were still around to give Nico and Jon a ride back in the Tesla, as the big poster and many flowers meant the car was full), and drive home. 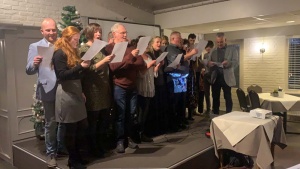 the family singing their hearts out… 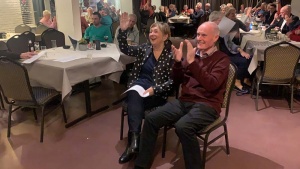 Riet and Nico enjoying the song 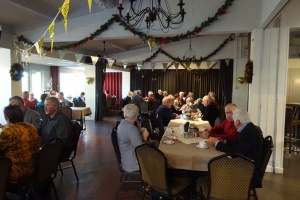 everybody enjoying coffee with the delicious cake 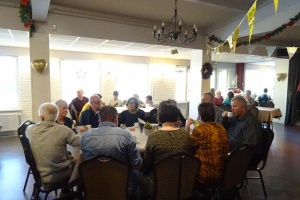 family and friends together in one room

cheers to the golden couple 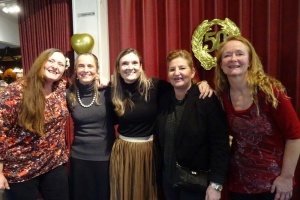 5 of the cousins together – Angelique, Jude, San, Claire and Miranda 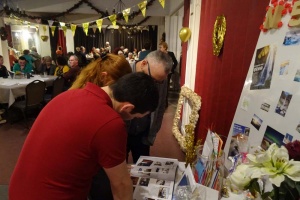 checking out the photo book 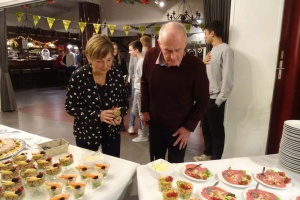 Riet and Nico checking out the buffet as it just opened 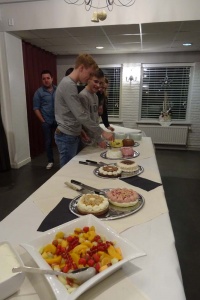 and of course there is plenty of dessert…

It had been a fantastic party, and we are looking forward to the celebrations for the diamond one in ten years time!

Check out the framed photos from the party, we managed to get quite a few people ‘in the frame’: