We met Marco a few years ago at the Laikipia Rift Valley Odyssey in Kenya, a bloke with long hair, no bike knicks, no bike jersey, a colourful basket on his bike with camera and snacks, always smiling and riding an e-bike. He made us all very jealous…

Fast forward a year or so and he was back at the big RVO, riding from Nairobi to the Masai Mara and this time he had brought a partner in crime – Bebo, also riding an e-bike. The long hair was gone and Marco was now wearing bike knicks and a jersey, but luckily the bright basket with camera remained!

So when we decided to visit Rome on our way back from France to Dar es Salaam, we got in contact with our favourite Italians to see if they would be around. Not only were they around, Marco also invited us to stay in his family house in Rome. We arrived late on Friday evening, luckily the French strikes didn’t effect our flight too much, and were welcomed by many! Kijo, Marco’s wonderful, hospitable wife as well as the 2 youngest kids (Kangethe and Wairimu) and several friends. They were having a dinner party and Bebo would also join. After a wonderful dinner with way too much delicious food we went to bed, plans for the next day were already forming and bikes were mentioned… 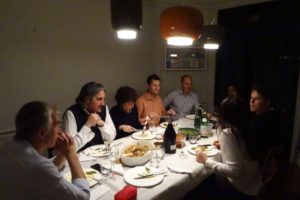 After a slow start of the day we hopped on bikes and rode into Rome. Marco was our excellent tour guide and Bebo joined later. We zoomed around easily on our bikes, Jon also on an e-bike, and covered everything! We cycled past the Vatican, watched the canon on Gianicolo Hill go off at midday, admired the view, got up close with the hole in the roof of the Pantheon, dipped our fingers into the Trevi Fountain, circled 53 times around the fountain of the 4 rivers, saw about a million churches and palazzios and of course circumnavigated the Colosseum. We managed to ride 36km that first day, but most importantly, Marco showed us where to get the best pizza on Campo di Fiori as well as the best Italian icecream, although there was a lot of debate between Marco and Bebo before deciding the latter. 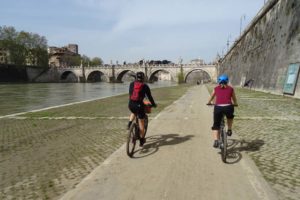 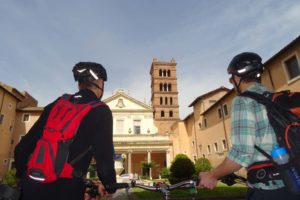 Marco and Jon at one of the many piazzas, palaces and churches we cycled past 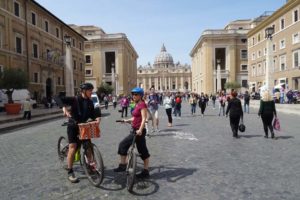 Marco and Jude with Vatican City in the background 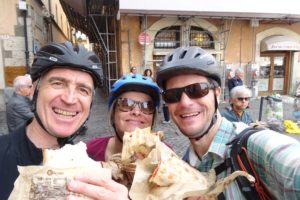 Marco, Jude and Jon eating the best pizza in Rome 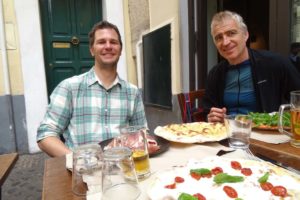 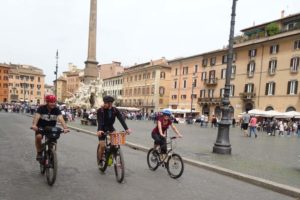 Bebo also joins the tour after lunch, we ride 53 laps around the Fountain of the Four Rivers… 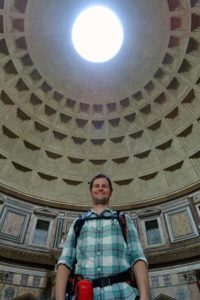 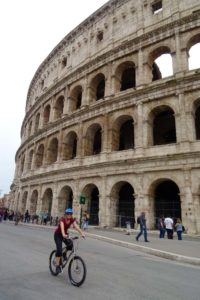 Jude rides around the Colosseum 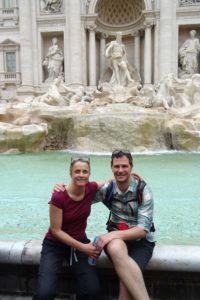 Jude and Jon at the famous Trevi Fountain 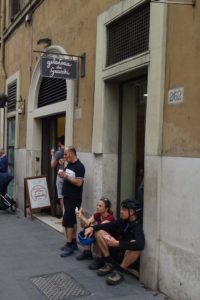 Italian ice cream in Italy, it was delicious

We went out for dinner on Sat night with Marco & Kijo, Bebo and Shane. We also know Shane from Nairobi and he is a mountainbiker too, working from Rome for a year, so it was great to see him and catch up.

Unfortunately the next day Jon had to head off to the airport and Marco was busy with the kids, so it was only Jude and Shane who hopped on the bikes on Sunday and explored Rome a bit more. This time they were heading out of town on the Via Appia, one of the earliest and strategically very important roads in ancient Rome. The old, massive cobbles were horrible to ride, but luckily many others had thought so too and some single track appeared next to the bumpy sections. We managed 57km that day and turned around when the Via Appia ended in a carpark in a small town. The Via Appia, built in 312 BC, still contains the longest stretch of straight road in Europe – 62km! 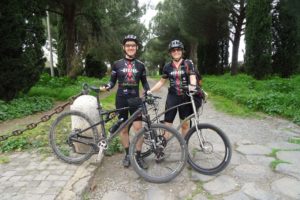 The Kenyan Riders in Rome (Shane and Jude), riding the Via Appia 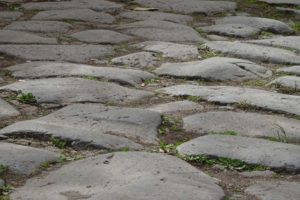 the original cobble stones of the Via Appia are not as smooth as they used to be, riding them without suspension is pretty horrible

The next day Jude visited Vatican City. Luckily she had bought her ticket online so she could bypass the long queues of tourists waiting to enter. With a tour guide and approximately 25 others she walked through the Vatican Museums for several hours, admiring many paintings, statues, maps and religious artifacts before being guided into the Sistine Chapel and then the St Peter’s Basilica. 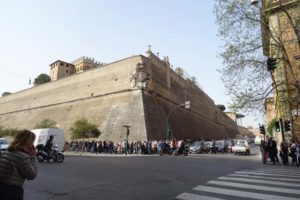 the long queue to enter the Vatican Museums goes around the corner, luckily Jude was allowed to walk straight past this line 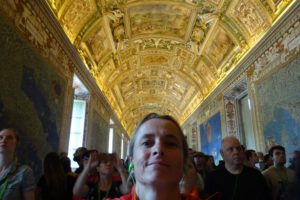 Jude in the Gallery of Maps in the Vatican Museums. The green earphones are to make sure you can hear the guide. 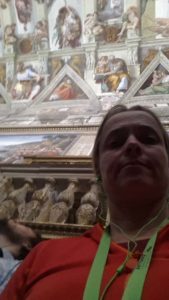 Jude in the Sistine Chapel

Once on her own again she also explored the crypts underneath the basilica and hiked all steps to the top of the cupola for an amazing view over Rome, quite spectacular, before heading back via St Peter’s square, Campo di Fiori (for another slice of that wonderful pizza) and the Trevi Fountain with icecream in hand. Hopping on the metro made the last section a little faster. 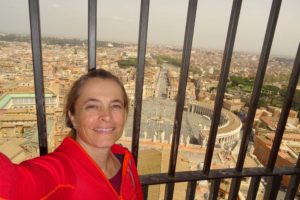 Jude on top of the cupola of St Peter’s Basilica 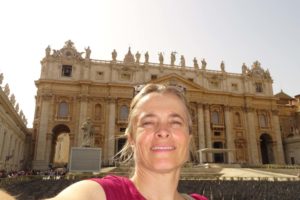 At home Marco had cooked up some more delicious Italian food, and that night Bebo and Shane also came around to Marco’s place to start another loop of the city by night, this time Marco joined without his e-bike.

We had a lot of fun cruising the dark streets of Rome, avoiding pedestrians, going back on ourselves, exploring random streets (or did Marco know where he was going?), visiting some more of the highlights by dark, all beautifully illuminated. We also passed a few of Marco and Bebo’s friends’ houses where we begged for chocolate (and were given yummy dark chocolate easter eggs and a whole bar of 99% dark chocolate, all thrown out of their windows!) and just laughed a lot. Around midnight we sneaked back into the house, great night! 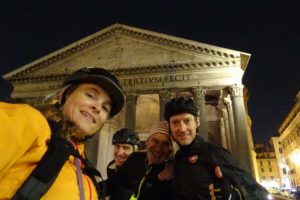 Jude, Marco, Bebo and Shane in front of the beautifully lit Pantheon 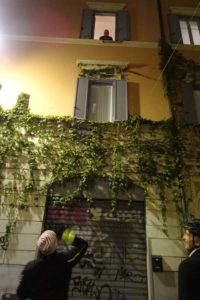 friends of Marco and Bebo are called upon to supply us with chocolate, they all obliged and threw some out the window for us! yumm!!! 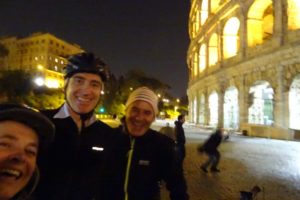 Jude, Marco and Bebo at the equally beautifully lit Colosseum, this was one of many selfies taken there as Jude just couldn’t get it right!

The next day Jude had to pack and also head for the airport, back to Dar in rainy season again. Rome had been a great little holiday at the end of nearly a month in Europe!