Back on the bike

Not a day goes by without us either talking about, researching, planning or booking a weekend trip in our household. Things get more exciting when a long weekend is on the horizon as we are able to go a little further afield, giving us more options to explore. When we realised Tanzania was having a super long weekend due to 2 public holidays nicely sandwiched around a weekend we needed to come up with a good plan.

As this long weekend was simmering in the back of our minds we received an email from Eric & Gerald, our friends who organise most of the mountain biking events in Kenya. A new Rift Valley Odyssey event had been masterminded and was scheduled for the long weekend in Kenya, which happened to coincide with our super long weekend. It made for an easy decision, we were taking our bikes back to Kenya for some riding in one of our favourite areas of Kenya – the Laikipia Plateau.

This time we were heading to the far northwest of the Laikipia, an area where we had never been before, to a conservancy called Ol Ari Nyiro, meaning black springs. It is the largest piece of land in private ownership in Kenya and is owned by a lady called Kuki Gallman, famous for the book she wrote ‘I Dreamed of Africa’, a book Jude read around 20 years ago before going on safari for the first time ever (in South Africa, Namibia, and Botswana), but now run by her daughter and husband, Sveva and Nigel.

We were staying at Makena Hills, one of 4 options for guests to stay on the property (there is also Mukutan Lodge, camping and basic bandas at Centre Camp). A stunning location at the top of a ridge, meaning every day of riding would finish with an uphill slog on rocky 4wd tracks. 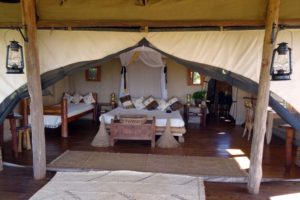 our beautiful room at Makena Hills, it also came with stunning views of Lake Baringo in the distance

Our riding group consisted of us (Jon and Jude), Helen & James (our mountain biking buddies in Kenya pretty much since the day we arrived), Hafiz (our latest mountain biking buddy and runner extraordinaire), Peter (the only one to bring a non-riding partner – Sharon), Eric (the guy who plots the course and includes all those hills along the way), Marco (the Italian with an e-mountainbike who doesn’t eat breakfast) and Danny (the guy who flies in with his own plane for a mountain biking event). A random group of mountain bikers who became friends during memorable hours spent in the saddle. 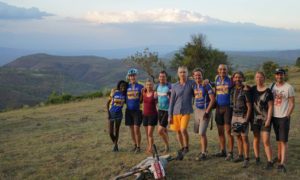 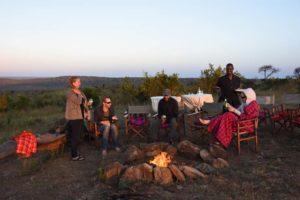 sundowners near the lodge around the campfire, the perfect end of the day

The first day was 40km and took us out of the conservancy to the biggest hill in the area and back to Makena Hills via a welcome waterstop. A tough loop with a few hike-a-bike hills, lots of rocky sections, amazing scenery, some thorns, and fresh legs. We rode as a group and made sure we captured the beauty around us with plenty of photo stops along the way. 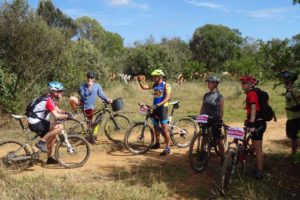 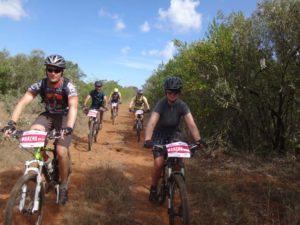 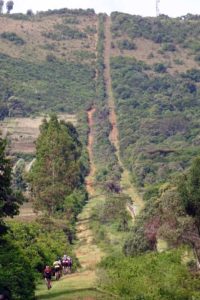 no we didn’t ride straight to the top, although we did end up there. Instead Eric took us on a route around the back of the mountain with 3 hike-a-bikes… 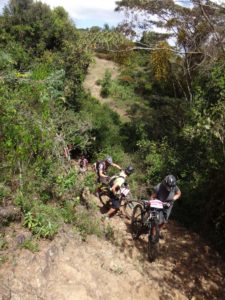 one of the steep hike-a-bike sections – Helen, James and Jon 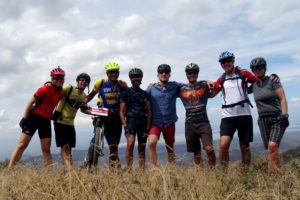 another team shot on day 1, just the riders with Lake Baringo in the background – Jude, James, Eric, Hafiz, Marco, Jon, Peter and Helen 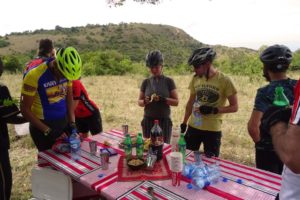 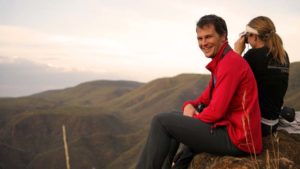 Jon and Jude checking out the valleys

sundowners at a lovely spot

The next day took us to Mukutan for lunch, just under 40km of riding through the conservancy. Despite the fact that they no longer have their own cattle on the property (they want to focus on conservation and wildlife), we mostly saw cows on our rides due to the problematic illegal grazing. The tracks were smoother, we rode past dams, had some punctures and then disaster struck. A massive stick in Jude’s derailleur forced the ball-bearings from one of the fly wheels and she was out for the day, uncertain if there would be an option to fix it here. The bike was thrown into the support vehicle and would later be joined by Helen and James’ bikes after lunch for the ride back to our lodge, another 25km of uphill, mainly on 4wd tracks after an initial single-track section. 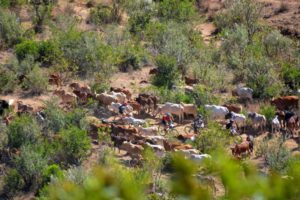 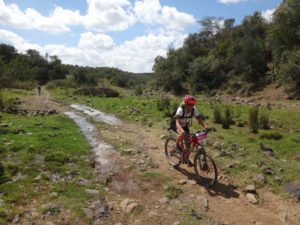 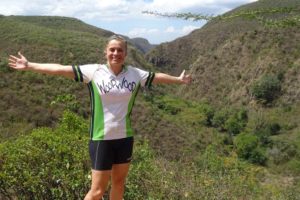 Jude and the view at Mukutan

We devoured a tasty and healthy lunch before descending into the Mukutan gorge for a dip in the hot springs, but luck had other plans for Jude. She ‘stacked it’ on the way down, slicing her hand open on something really sharp and needed stitches. As we were in the bush, miles away from any hospital or doctor, we created our own butterfly stitches out of plasters and ‘stitched’ the wound that way (thanks Pete!). We replaced them later with homemade steristrips (made out of plasters again) and the doctor back in Dar was happy with the end-result. 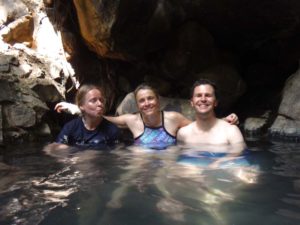 We did make it to the hot springs in the end, hand protecting the wound with the homemade stitches

It was a fast ride back, racing the setting sun back to the lodge and Jon felt the effects of living at sea level whilst riding at altitude, combined with not riding for nearly a year…. 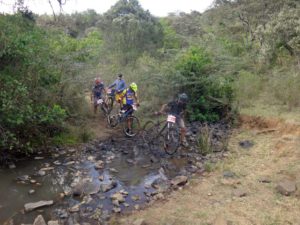 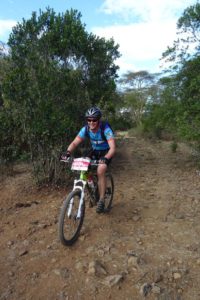 Jon after riding some of the single track leaving Mukutan 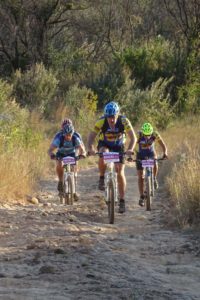 Day 3 was another 40km ride completely within the conservancy. This time a one-way ride along the 4wd trails to Centre Camp with a quick stop at the airstrip to drop off Danny who was flying straight back to Nairobi with his bike. The cars were driven down for us so we could depart straight after lunch. 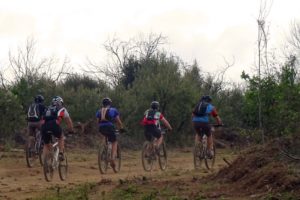 James decided to ride that day, despite the fact he had injured his wrist in a stack at the Ol Ari Nyiro springs the previous day. He managed to take a wrong turn as the support vehicle was assisting Peter with his bike and Nigel (our scout on a motorbike who usually rode ahead of us) had to come to the rescue whilst the rest of us relaxed in the ‘highland games arena’ where staff and the local community once a year compete in a variety of Kenyan highland games, such as spear throwing, bow and arrow shooting and running races. 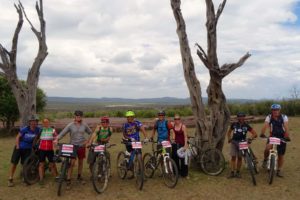 the riders of the weekend, luckily we found James again who had managed to take a wrong turn whilst the support car was fixing a dereailleur…

We all got to experience the e-bike on trails and have updated our wish list for Christmas… They are amazing and perfect for somebody who wants to enjoy the trails, but doesn’t have the fitness or power (any more) to pedal a bike for hours on end.

It was a wonderful weekend, full of great trails, superb scenery, delicious and healthy food, and new friends. We are all talking about the next RVO already, making sure bikes and bodies are fixed and in good shape. If you want to join us, have a look at the rift valley odyssey website and see if you can find a ride you are interested in and let us know, we highly recommend them! 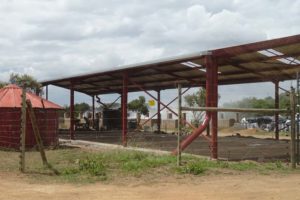 they make ecological charcoal by using the leleshwa tree that needs to be cleared in the fire breaks, a great setup