For us it was a last minute decision to go to Ol Pejeta for the weekend as Jon’s workshop was unexpectedly cut short. We managed to find some last minute accommodation, but the owner asked if we could collect supplies on the way as he wasn’t expecting any guests, “Please stop in Nanyuki on the way. Cross the railway, over the bumps and look for the Nanmatt supermarket on your left. From 09.45 there will be a stout woman with vegetables, fish and bacon for you to collect. Thanks.” We were sure happy to find her easily as we didn’t really want to ask around for a ‘stout woman’!

The Ol Pejeta Conservancy is a not-for-profit wildlife conservancy. It covers 360 square kilometers and lies between the foothills of the Aberdares and Mount Kenya on the Laikipia Plateau. It has the biggest black rhino population in East Africa (just over 100) and also has 3 of the last 4 northern white rhinos in the world, as well as the southern white rhinos. On top of that there is a chimpanzee sanctuary where orphaned, rescued and abandoned chimps can have a semi-normal life in huge enclosures. 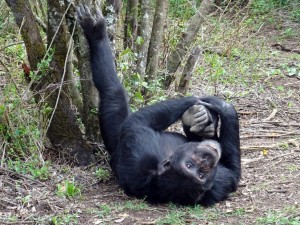 one of many rescued chimpanzees living in the enclosures at Ol Pejeta, they keep their carers at their toes by constantly finding new ways to escape

They also have the big 5 running around in their conservancy and all the other usual suspects, so we spent hours game driving and enjoying the wildlife. 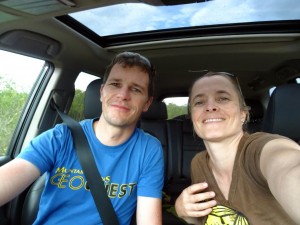 The plight of the rhino is well known. At the beginning of the 19th century it is estimated there were half a million rhinos in Africa. Today there are just 20,000 white and 5,000 black rhinos left – a 95% decline in population! On safari in Kenya you are very lucky to see one, so we were quite amazed to see more than 30 different rhinos that weekend, black as well as white. The white rhino is not actually white, but got its name due to a mistranslation from the Dutch word for wide, as it is a grazer and therefore has a wider mouth compared to the black rhino (a wide mouth being better for eating grass). The black rhino is a browser (narrow mouth for easily picking the leaves off plants). We even saw both black and white rhino babies which is pretty special.

Just as you drive into the conservancy you cross the equator, and of course there is the obligatory sign here too with Mount Kenya providing a dramatic, albeit distant, backdrop. 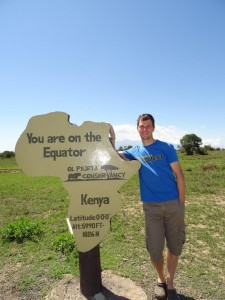 the equator – can you spot Mt Kenya in the (distant) background?

The bush camp where we were staying was a luxury tented camp. This is worryingly becoming our ‘minimum’ standard for accommodation nowadays! Our tent was right next to the river where the hippos hang out, had an amazing en suite and of course the hot water bottle at night in your bed. The food was fantastic and served in a small tented dining room next to the river as well, with a ‘living tent’ complete with period furniture, a well stocked library and G&T’s…. The fire at night was right next to the river, opposite a salt lick on the other side, which meant we could relax, swap stories with the owner Alex and see the elephants and buffaloes close-up as they dropped in for a drink or a lick. 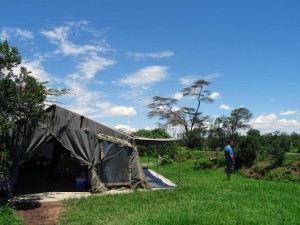 it may not look it, but this is quite a luxurious setup 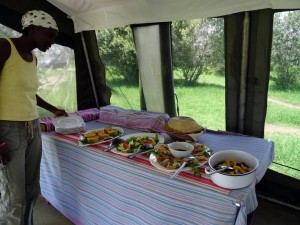 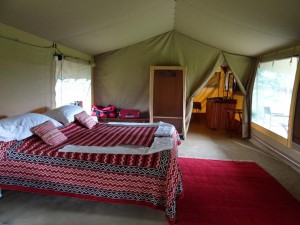 our tent, with en suite bathroom of course 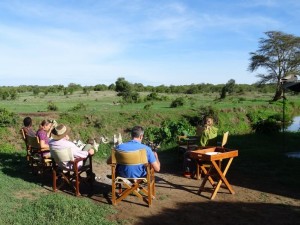 Two researchers were staying in the camp as well, studying the ticks in the area which are responsible for East Coast Fever. East Coast Fever is a disease affecting cattle, sheep and goats caused by the bite of an infected tick and it is the reason for a huge loss of livestock each year in Kenya. We learned a lot of interesting facts about the ticks and their method of research and were told that every week or so all the livestock on the Laikipia plateau has to go through a dip to prevent the disease.

We went to visit Baraka in his enclosed area to get an up-close encounter with a black rhino. They keep him in a fenced off area as he is blind and therefore not capable to survive in the wild. He’d be perfectly fine looking for food as rhinos have bad eye sight anyway, but he’d struggle to defend his territory against attacks by other males, hence the move to safer environs.

We gave him some sugar cane, a little treat for him, and Jude scratched his ears for a bit which got him very excited… It was humbling to see such a huge animal from this close, they are so beautiful. They cut off his horn every 2 years or so to try to make it unappealing for poachers to kill him. In fact, most photos of rhinos you see nowadays are all with cut-off horns. If a rhino’s horn hasn’t been cut off, it is actually a lot longer (read more about de-horning of rhinos’ horns). 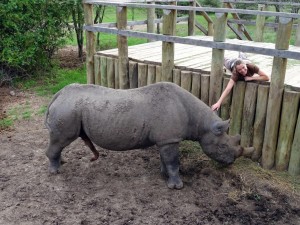 blind rhino Baraka getting excited from an ear scratch

The rhinos inside the fenced off area are guarded 24 hours a day, 7 days of the week by several armed rangers. And they need to be, as unfortunately Ol Pejeta has 9 graves for poached rhinos on its land. A sad reminder that even in a fenced off area like Ol Pejeta, with a lot of extra security (including highly trained dogs, rapid response teams and more recently drones) the poachers still manage to kill rhinos…. 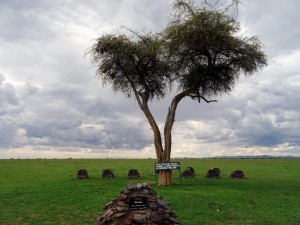 unfortunately there are still rhinos being poached even here. These are the graves for the poached rhinos (the one in the foreground is of a rhino who died a natural cause)

rhinos, rhinos everywhere… you are unlikely to see this anywhere else in Africa 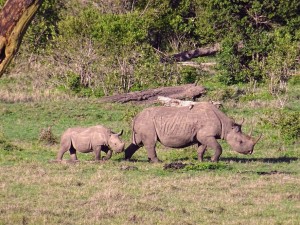 One great idea gaining momentum is to create artificial rhino horn using 3D printers, flooding the market and destroying its market value. Rhino horn is made of keratin, the same material as fingernails – and one company in the USA believes they have the technology to replicate it (read this article in the Independent if you are interested). Will it work? Who knows, but something needs to be done, that’s for sure.

The Ol Pejeta conservancy was quite damp in places due to the recent rains and the black cotton soil was pretty treacherous in places (just like in the Mara – read New Year’s in the Mara if you haven’t read about our troubles with black cotton in the Mara). Luckily this time we didn’t get stuck and after some more successful and very enjoyable game drives we drove home again on Sunday afternoon.

We have grown to enjoy these private conservancies in Kenya immensely – they seem to have their act together with friendly and motivated staff, plenty of funding derived locally and from overseas and most importantly a very successful rhino breeding program. Check out the Ol Pejeta website if you want to know more about what they are doing (or want to go there). 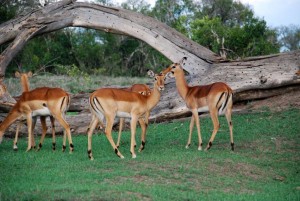 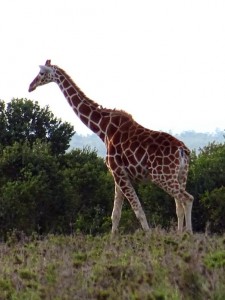 a reticulated giraffe, this is the type you often see in zoos, but it is not very common any more in the wild 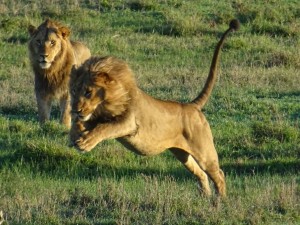 this male lion didn’t want to get wet feet 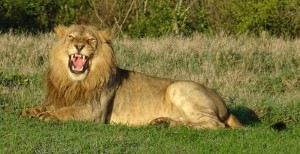 this time it was just a yawn 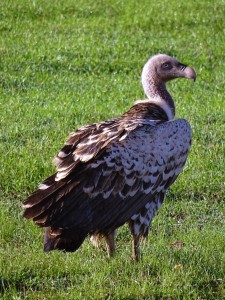 a family of jackals near their den 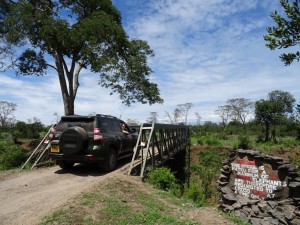 NOTICE – this bridge is rated for a maximum of 11 tons, elephants are therefore requested to cross two at a time only!!! 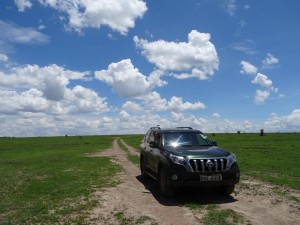 some areas of Ol Pejeta are very open 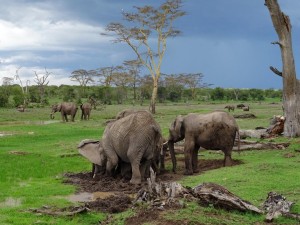 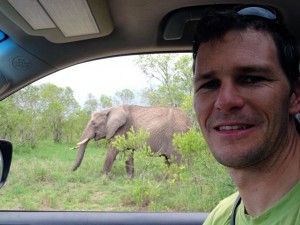 wildlife viewing from the car, they get pretty close sometimes