New Year’s in the Mara

Taking only one day off (Friday) meant another 4-day holiday, another opportunity to explore a bit further afield than the usual weekend trips we have been doing. Plus the bonus of Jon’s work sending all its staff home on Wednesday after lunch meant we were able to leave around 1pm.

We had spent the xmas 4-day break on the coast with Fran and Phil, friends from Perth who had arrived perfectly on time to join us for our mini xmas break. As they were on their way from Western China to South Africa by bicycle, arriving just in time to join us was no mean feat! This time however, we were going more inland; to the Masai Mara for some amazing wildlife viewing. 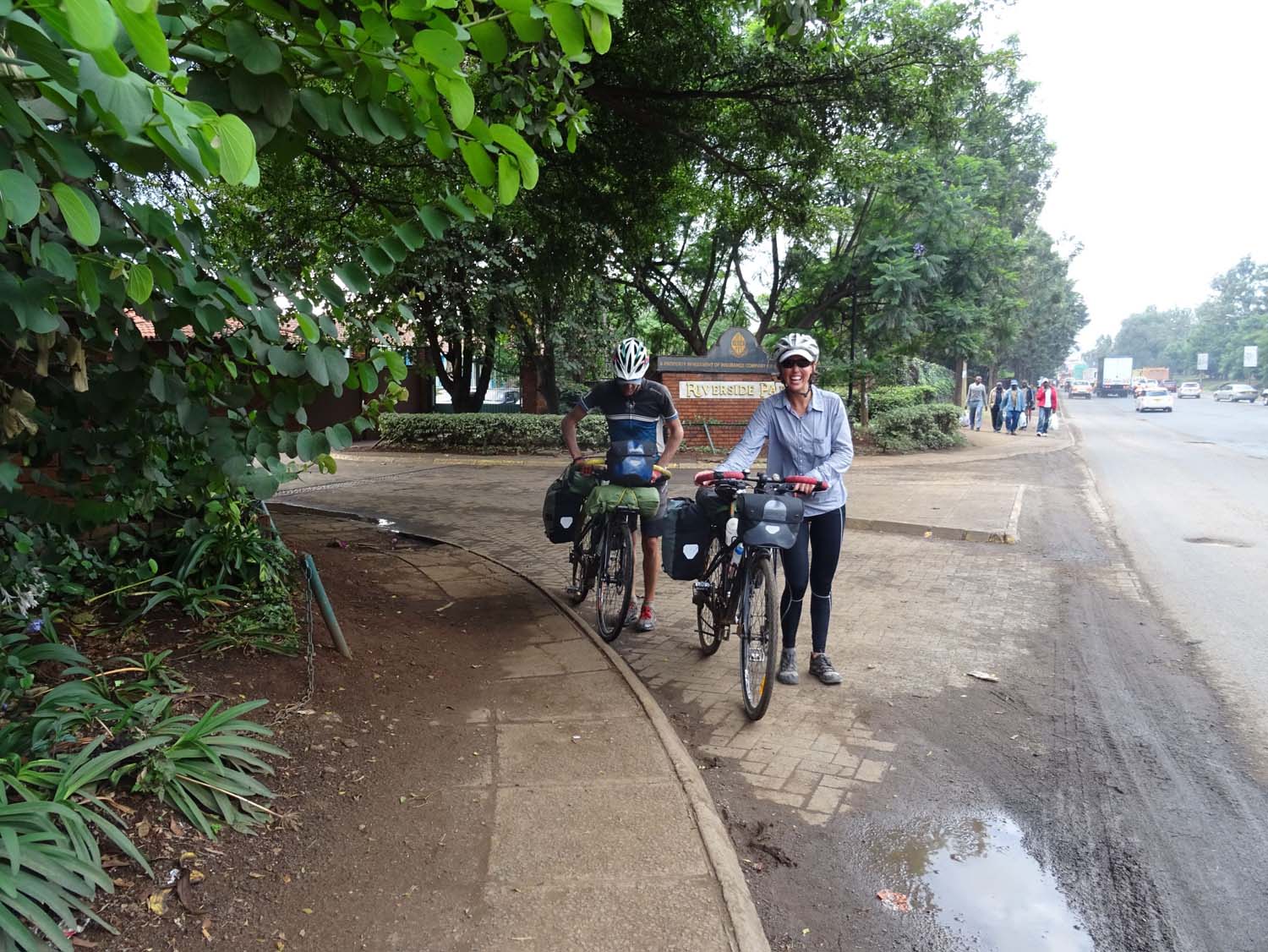 Fran and Phil arrive at our place 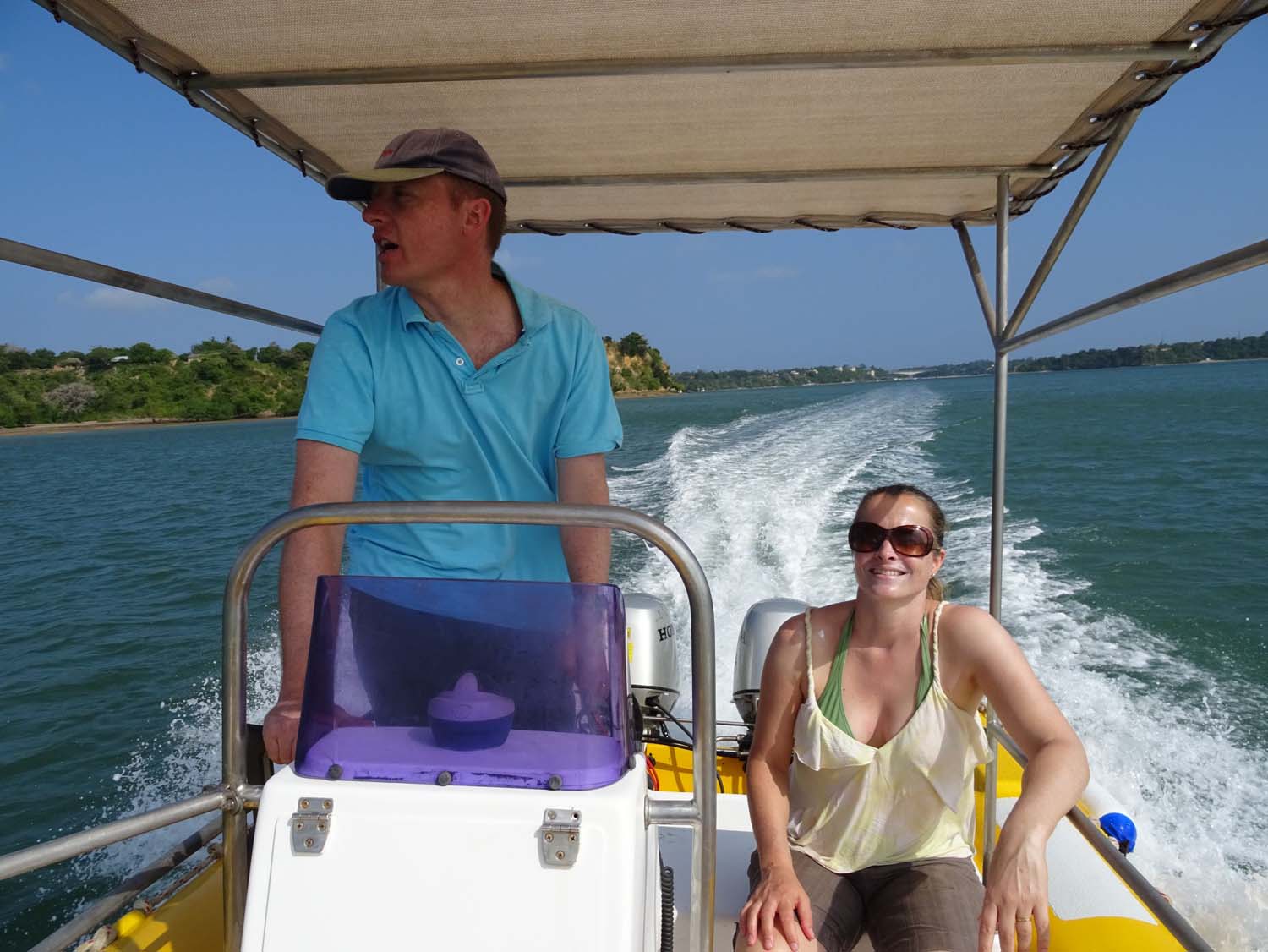 Rob takes us out for a spin around the creek 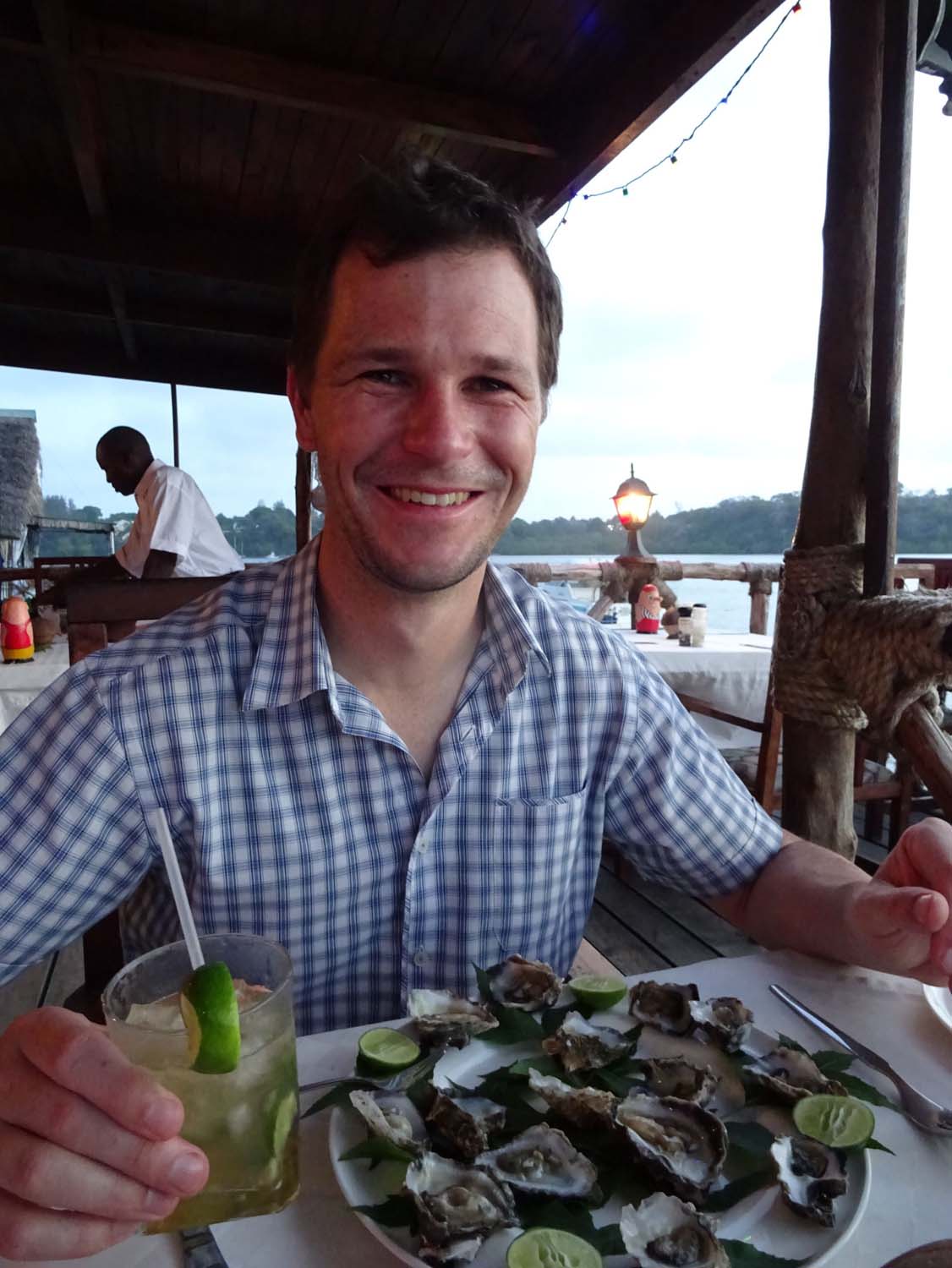 It’s about a 4hr drive to the Sekenani Gate on the Eastern side of the Game Reserve (see below if you want to know why it is not a national park). And we arrived there just before prime game viewing time, and within half an hour of entering we spotted a cheetah with 5 cubs (well, we spotted all the white vans in the area and then found the cheetah there with cubs once we got closer). A great start to our little holiday! 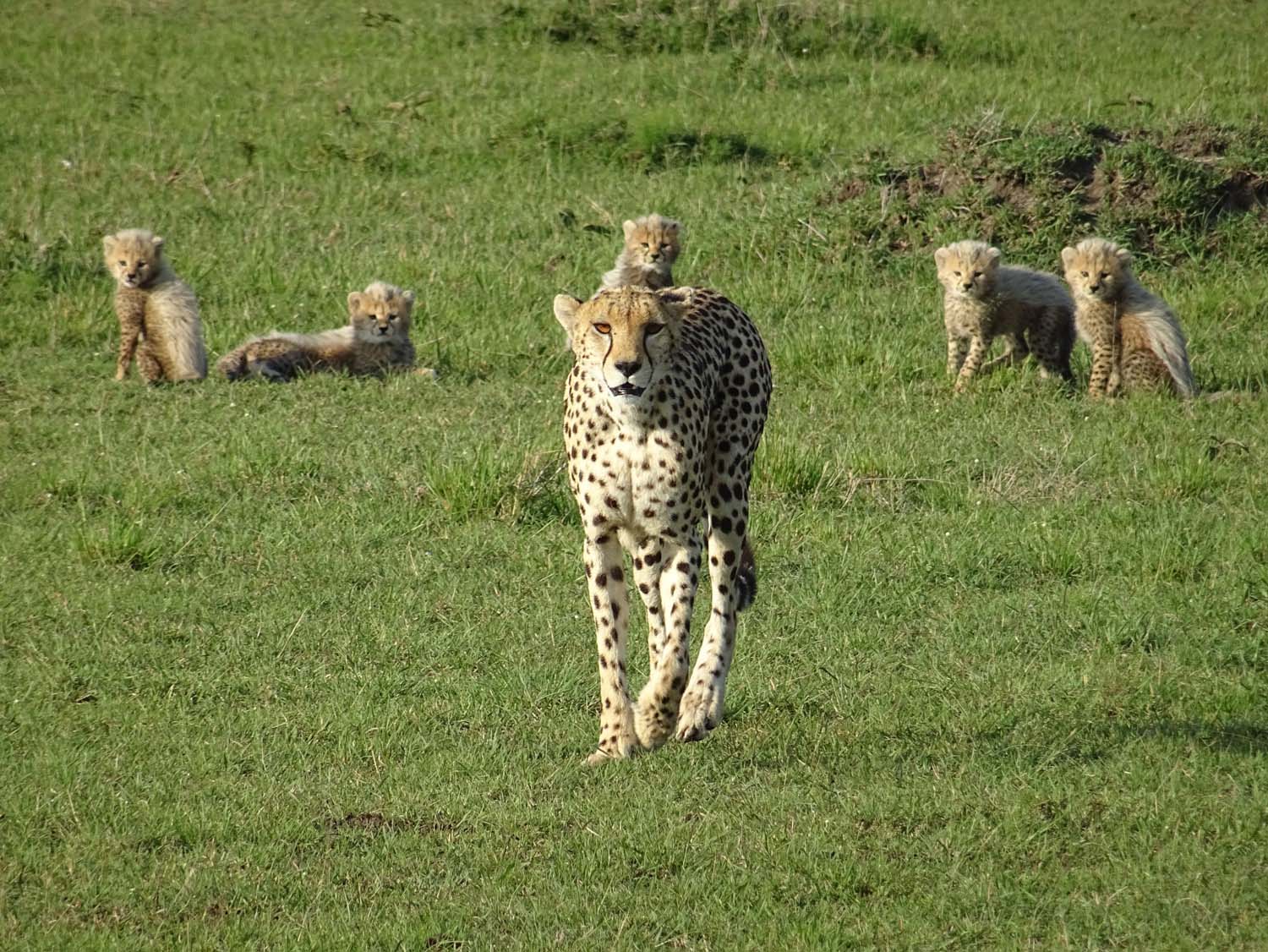 We had decided to camp in the Mara, and spent the first night at Aruba Camp. A lodge just outside the Reserve which also has a campground. The next night however we didn’t spend at our campsite at Aruba as we got well and truly bogged on our exploration of the reserve… 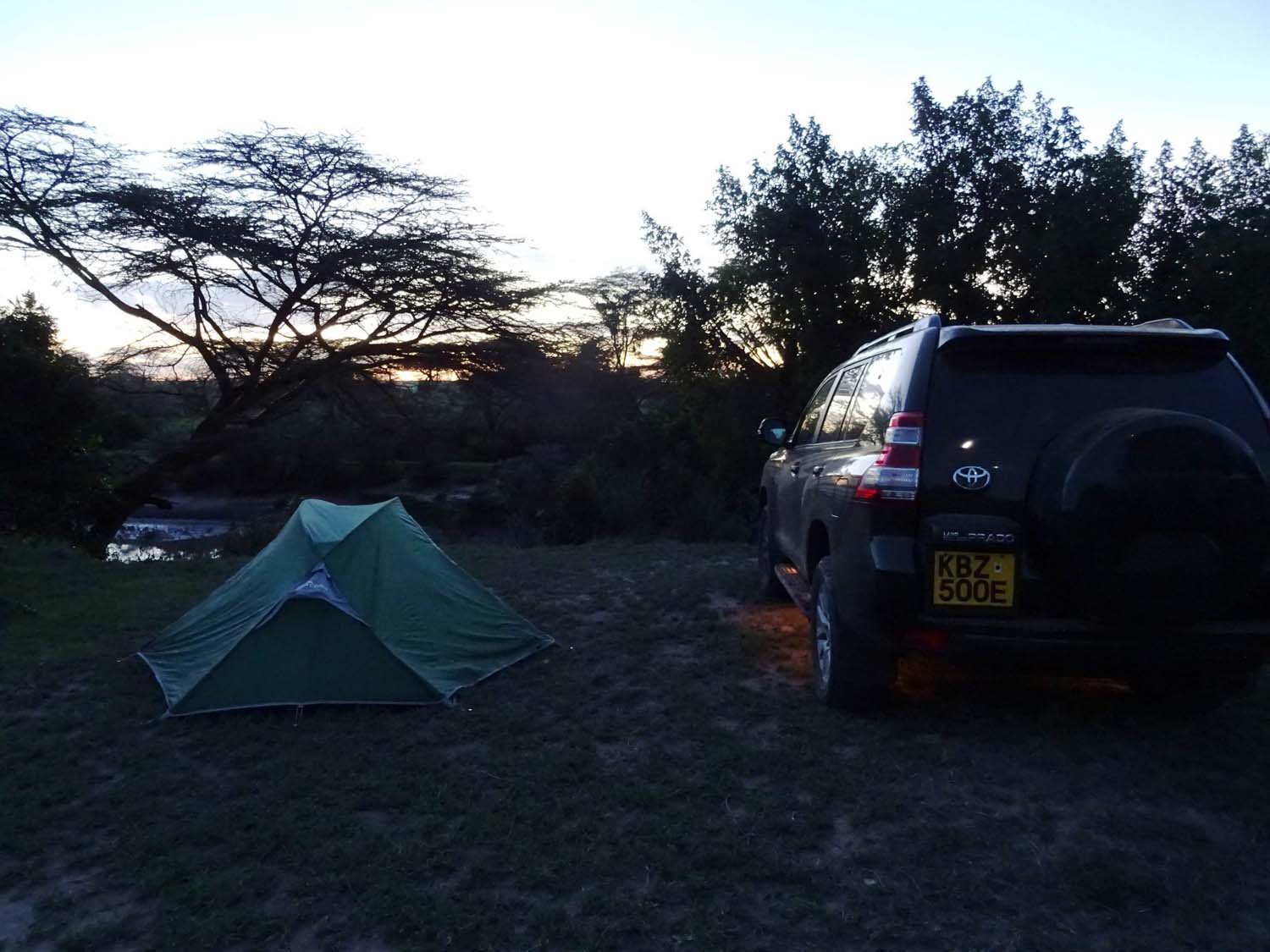 our campsite at Aruba camp just outside the Masai Mara

In the most southern area of the park we cruised along the Sand River, had a lovely snooze in the shade of a sausage tree, and enjoyed the animals without the crowds. And then we hit the black cotton when trying to cross a little creek, a tiny creek is probably a better description. Black cotton has nothing to do with the cotton in your shirt. It is the name the Kenyans give to their black soil that gets incredibly slippery and boggy after rain. And when they say incredibly slippery and boggy, they mean it! Once we got the car stuck, face down in the creek, at about a 20 degree angle, there was no getting out…!

We tried for many hours digging out the bank, placing rocks and branches under wheels, lowering the tyre pressure, digging out the mud from underneath her (she was beached too) jacking her up to create a better clearance, nothing worked. By this time it was well and truly dark and Jude was tasked with spotting for animals as Jon kept on digging and jacking up the rear as she spat out the rocks again and again. 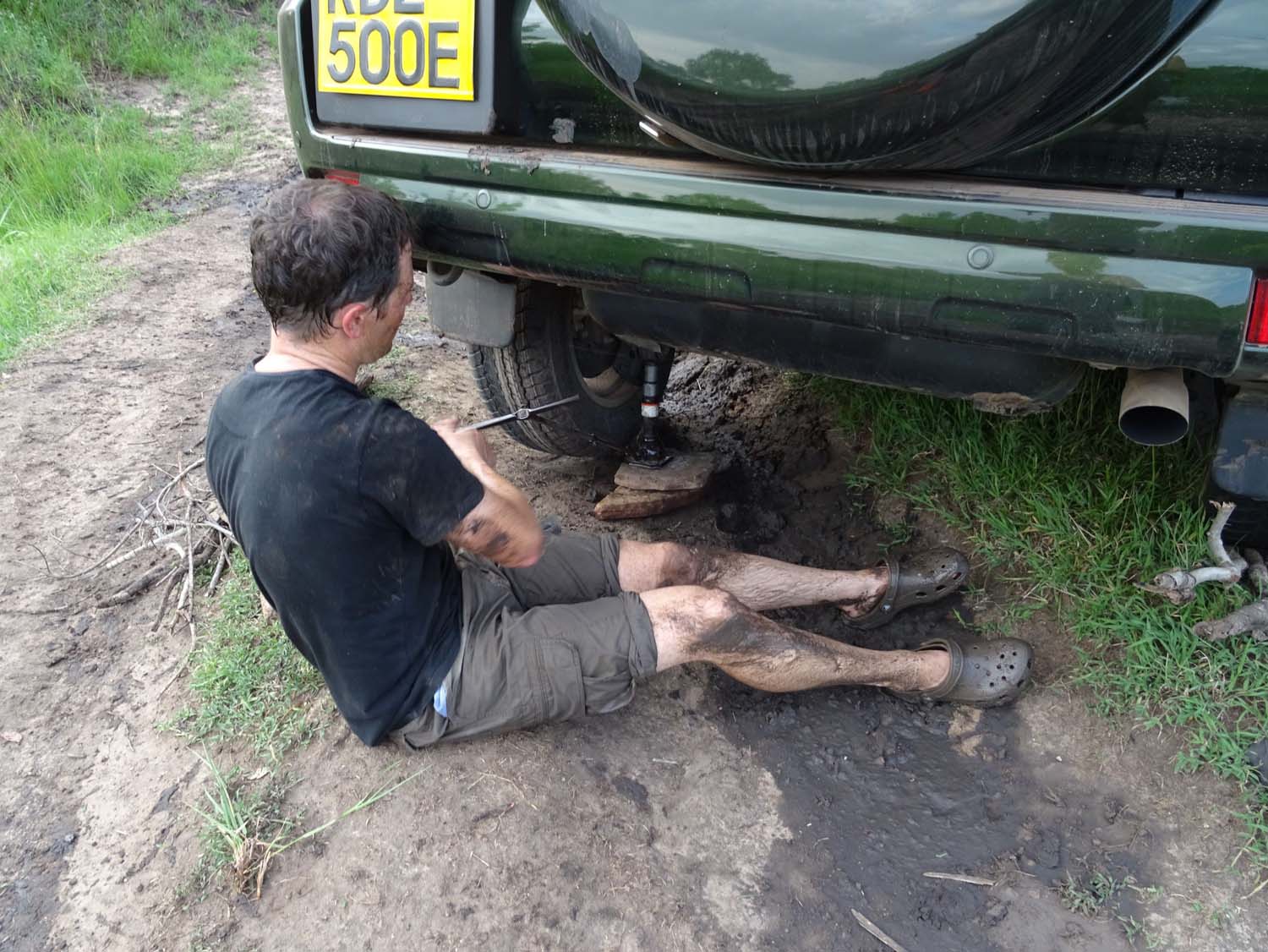 jacking up the wheel to get some rocks underneath for traction and trying to get her un-beached.

As we had not received our sea freight yet, we had no sand-ladders to help us, no shovel, no satellite phone (there was no mobile reception where we were), no nothing really. We had the little jack (which worked remarkably well), some rocks and branches and our hands to dig with…

At one stage we heard the lions pretty close by, so we called it a night and tried to get some sleep, not great when the car is face down in the ditch, but we managed to sleep a bit. We had seen massive lion paw prints around the little creek in the mud and didn’t want to take our chances with this huge animal, skilled to hunt at night, excellent at stalking its prey… 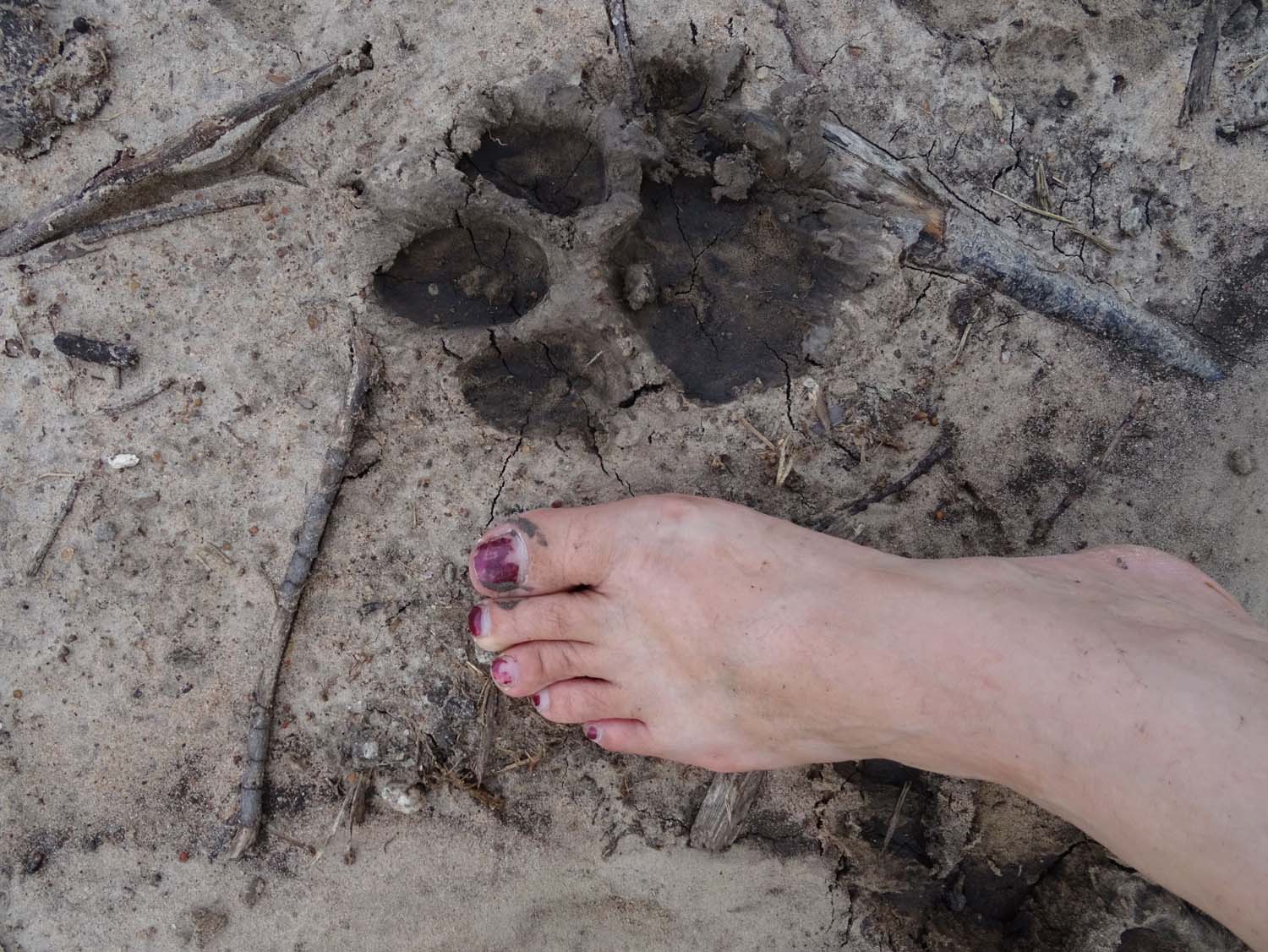 huge lion print right next to our forced campsite

Jude had to get up in the middle of the night and went outside with her little torch. As there was a full moon you really didn’t need a torch, but for some reason she turned it on anyway – staring straight into 2 eyes, only about 10-20m away. She headed straight back to the car, and picked up the ay-up mountain biking lights (we were very happy we brought those!) and got back out to see whom these 2 eyes belonged to: a hyena! Luckily animals are more scared of us than we are of them, and the hyena moved away reluctantly and circled the car before trotting down the road on the other side. 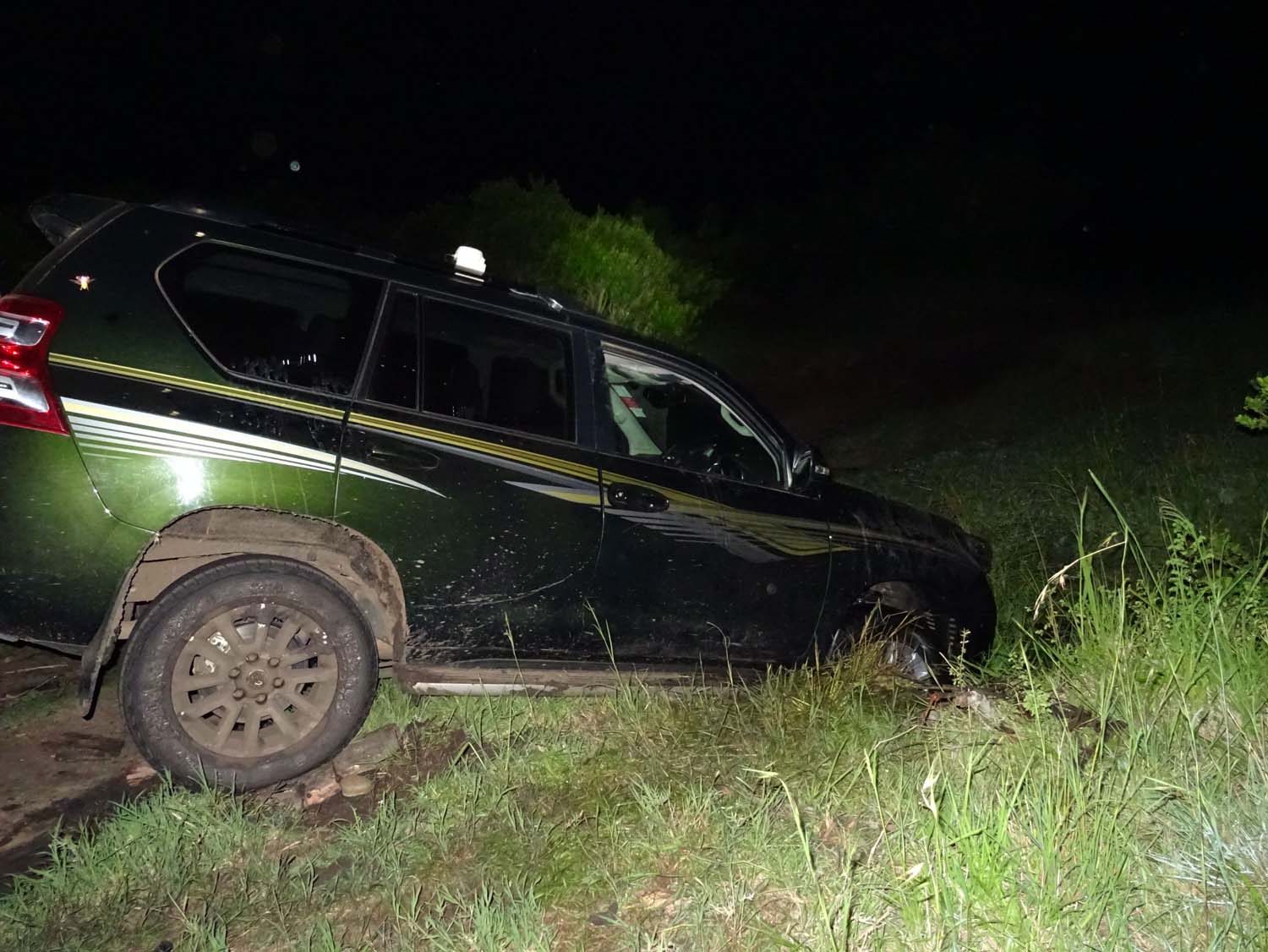 our not so comfortable bed for the night

The next morning we gave up our attempts to reverse the car out the way it went in, instead trying to work out what would be required to drive it out forward. We set to work and after a few hours it started to look possible. And then we thought we heard a motorbike, a bit strange as they are not allowed in the reserve, but we kept hearing this rumbling sound which appeared to be coming from the direction of Tanzania (our remote spot was very close to the border). A little later we discovered what had been making that rumbling noise: an angry elephant…! We hopped into the car again, hoping he wasn’t angry with us as he was now trumpeting angrily and stamping around. He appeared out of the bush about 30m in front of the car, stopped, looked, trumpeted and rumbled some more, before he luckily decided to move around us as well, circling around our spot the same way the hyena had done. We heard him for the next 20 minutes as he rumbled and trumpeted slowly getting further away, wondering what had upset him that much.

We continued gathering dead branches, mud and rocks to create a gentle slope out of the ditch until we decided it looked good enough to try. We were delighted when she crawled forward! This was looking good. Half way out we stopped as we could now access the steep bank she had been beached on, and before driving down with the rear wheels we added some more rocks and branches to the ditch to ensure she wouldn’t get stuck again or damage the tray or mudflaps on the steep bank. And then she was out. Just like that. 18 hours after getting stuck we were free to go and enjoy some more game driving! 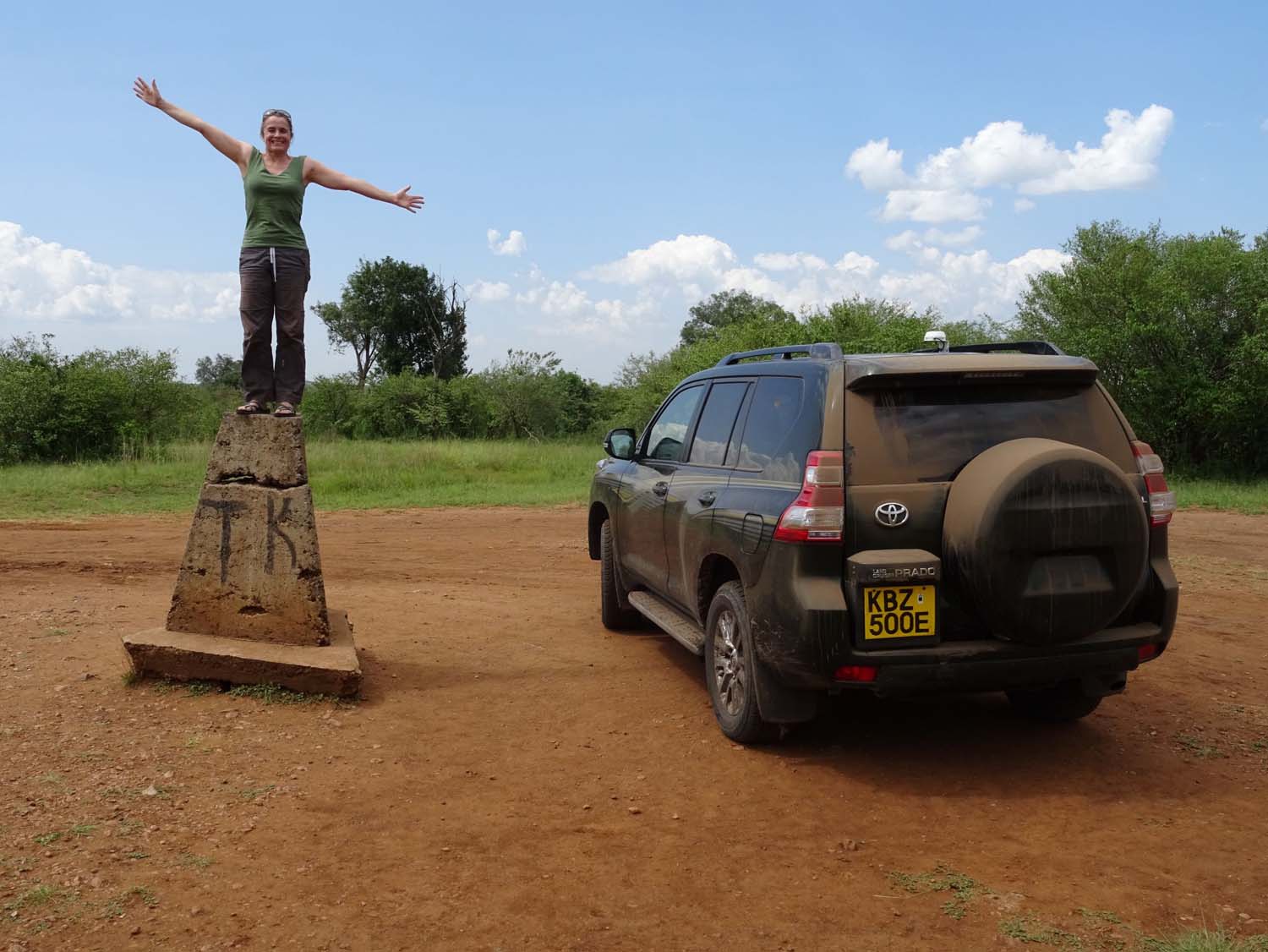 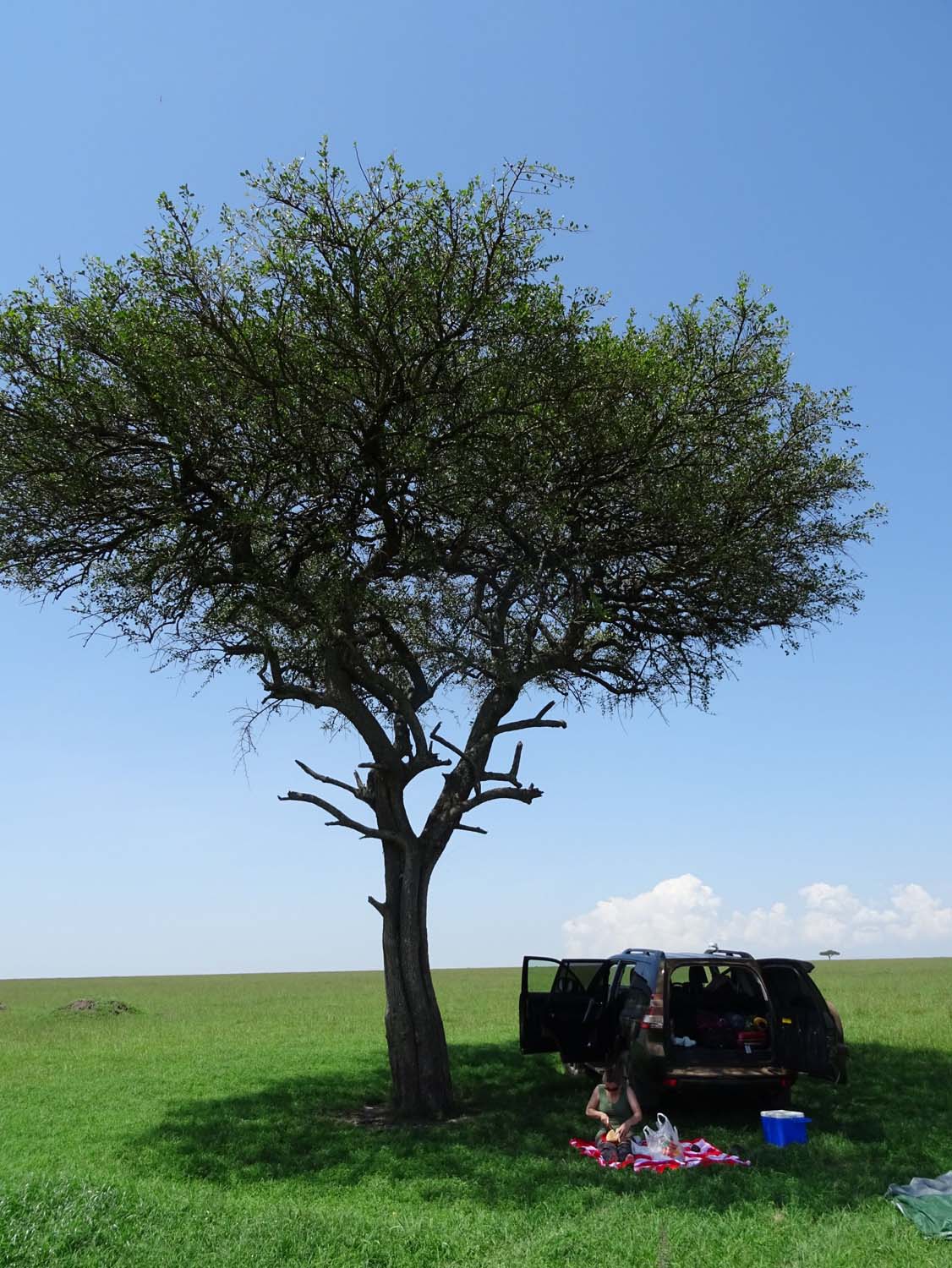 At the end of the day we returned to our campsite and discovered staff had been worried, but had no idea what to do when we didn’t show up for dinner the previous night. Nice to know we were at least missed, and they didn’t charge us for dinner either…

The next day we explored the Mara Triangle and camped next to the Serena Hotel after stopping in for dinner (and yes, they welcomed us with “welcome for dinner”, just like their sister hotel in Nairobi!). That night Jon was kept awake by the hippos around our tent and Jude was woken up and sent out with a torch to check out the situation. But we didn’t let the lack of sleep get in the way of an early start and just before sunrise we were on the road again. Sunrises (and sunsets) in Africa are absolutely sensational and worth getting up for, with an added bonus of spotting more animals as they are still out in the open and active before hiding in the bush and scrub for the day. We even managed to see the ‘Big 5’ within the day. Quite frequently, we spot animals by checking out the area where safari vehicles are already stopped, but the rhino and the leopard were spotted by us that day! 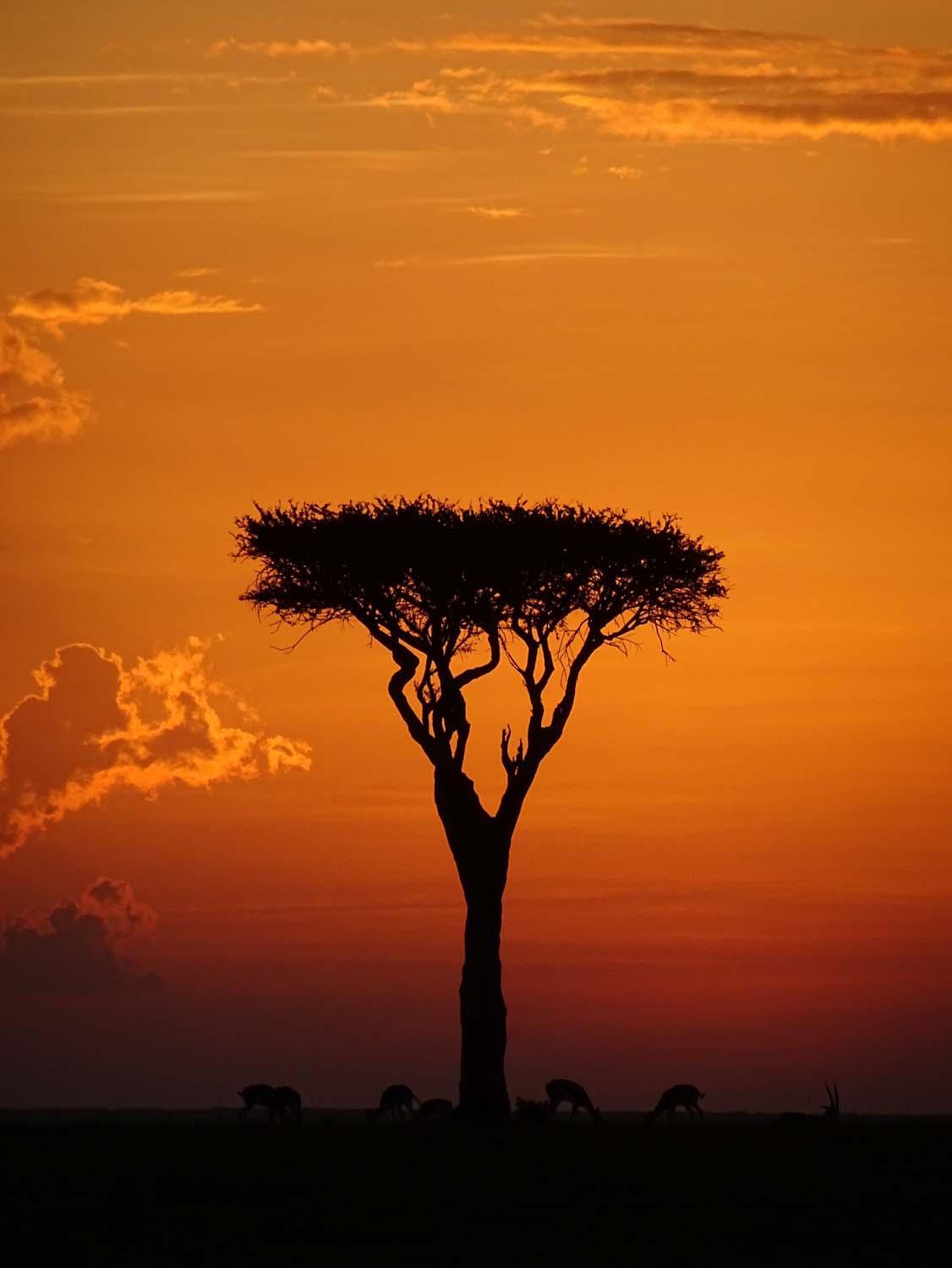 another gorgeous sunset in Africa

And then it was already time to go home again. We were warned traffic was going to be diabolical as everybody from up-country would be getting back to Nairobi that evening to get back to work for the first time in the new year, but we had another good run and got home just under 4 hours. We’ll be going back to the Mara that’s for sure! 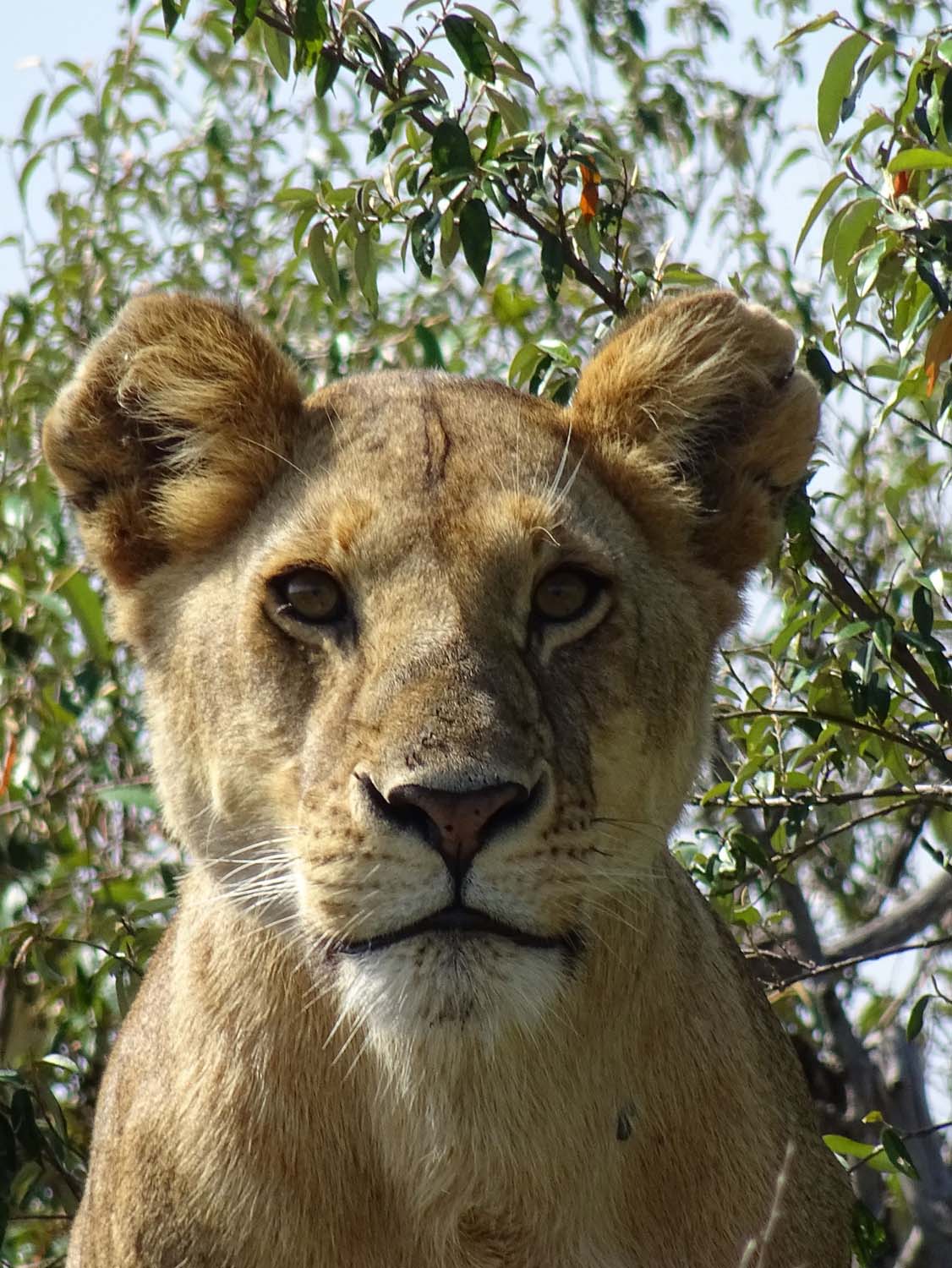 she has spotted her potential dinner, note the intense look in her eyes 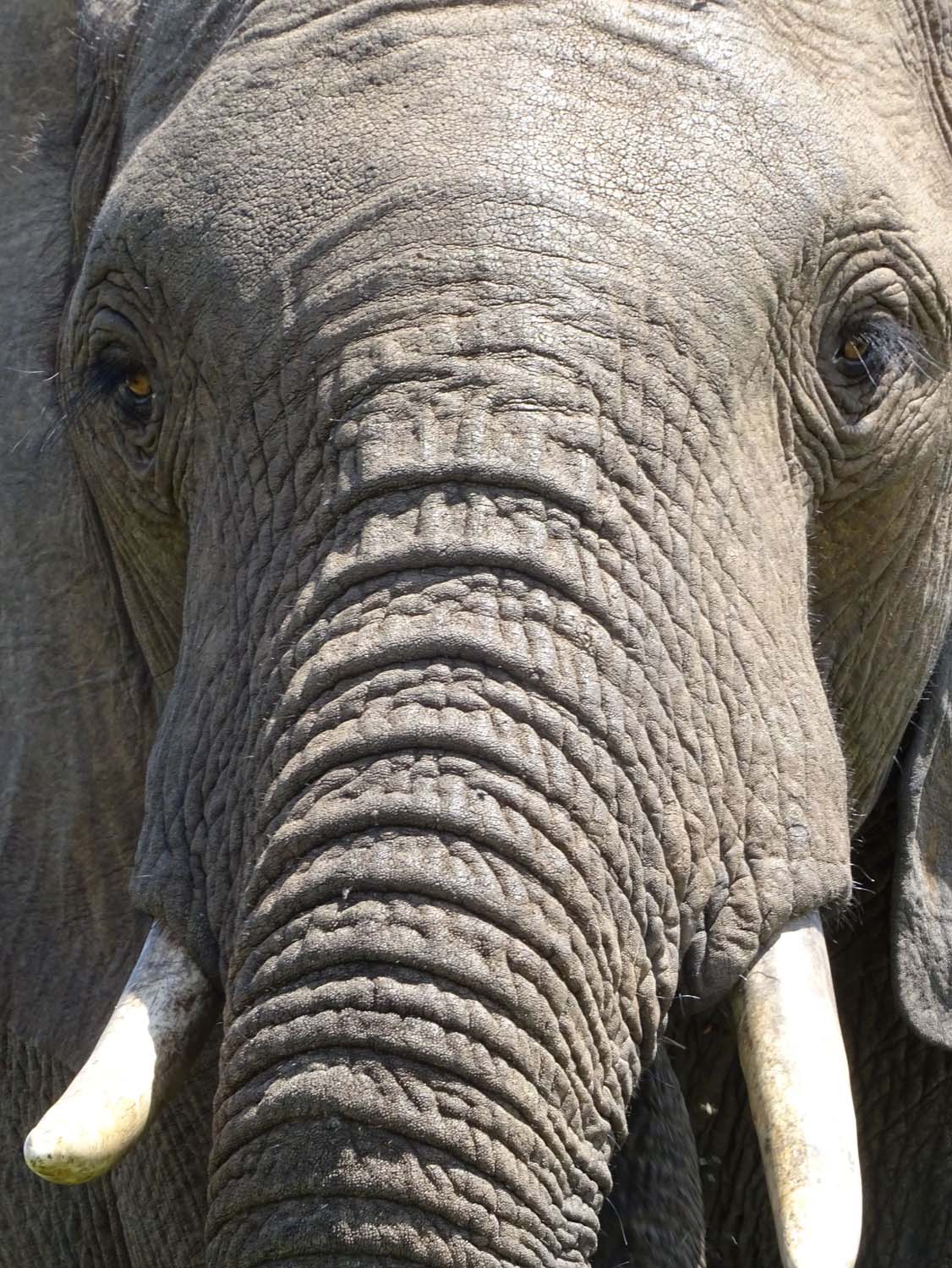 this gentle giant came to say hello whilst grazing 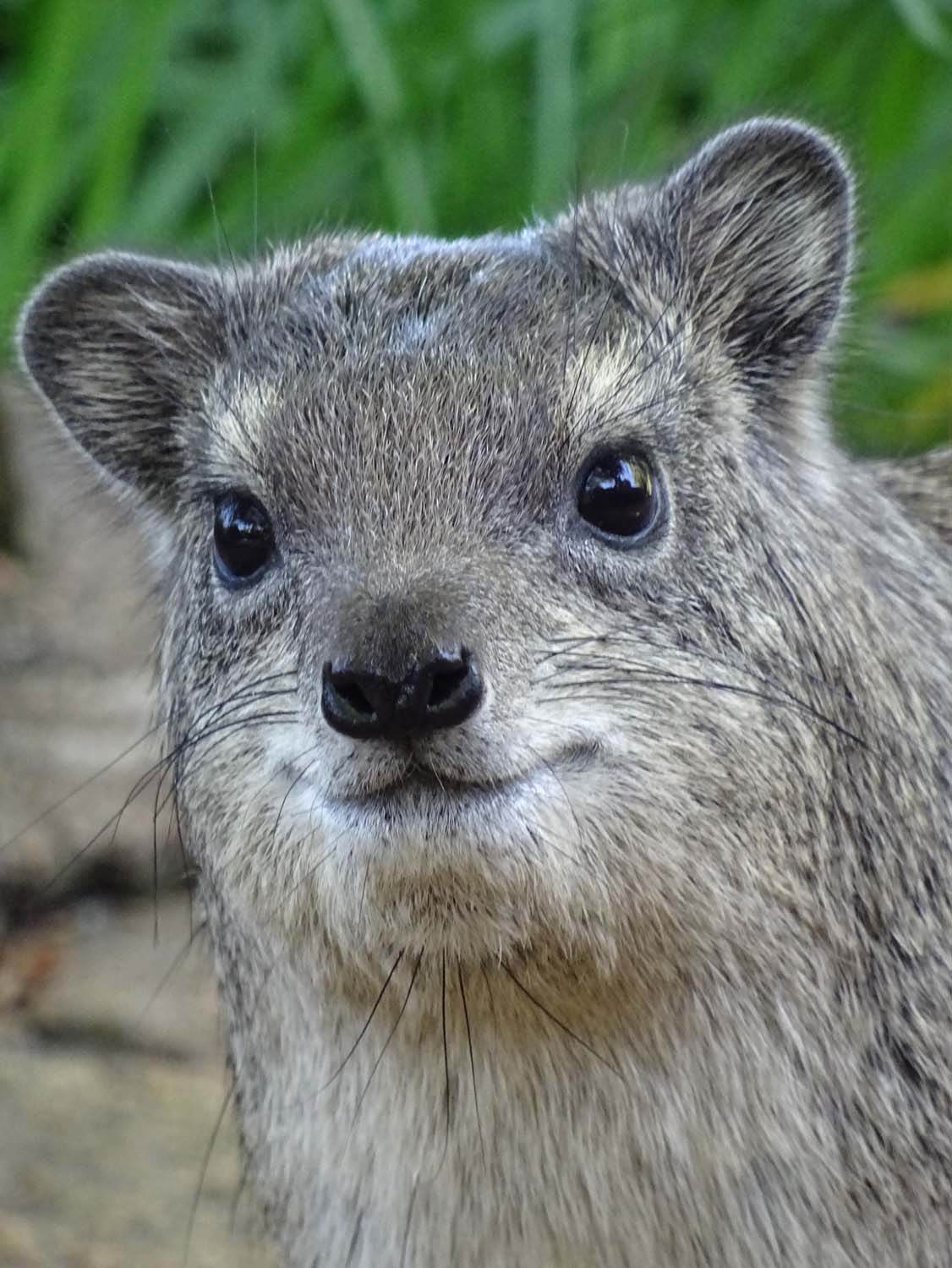 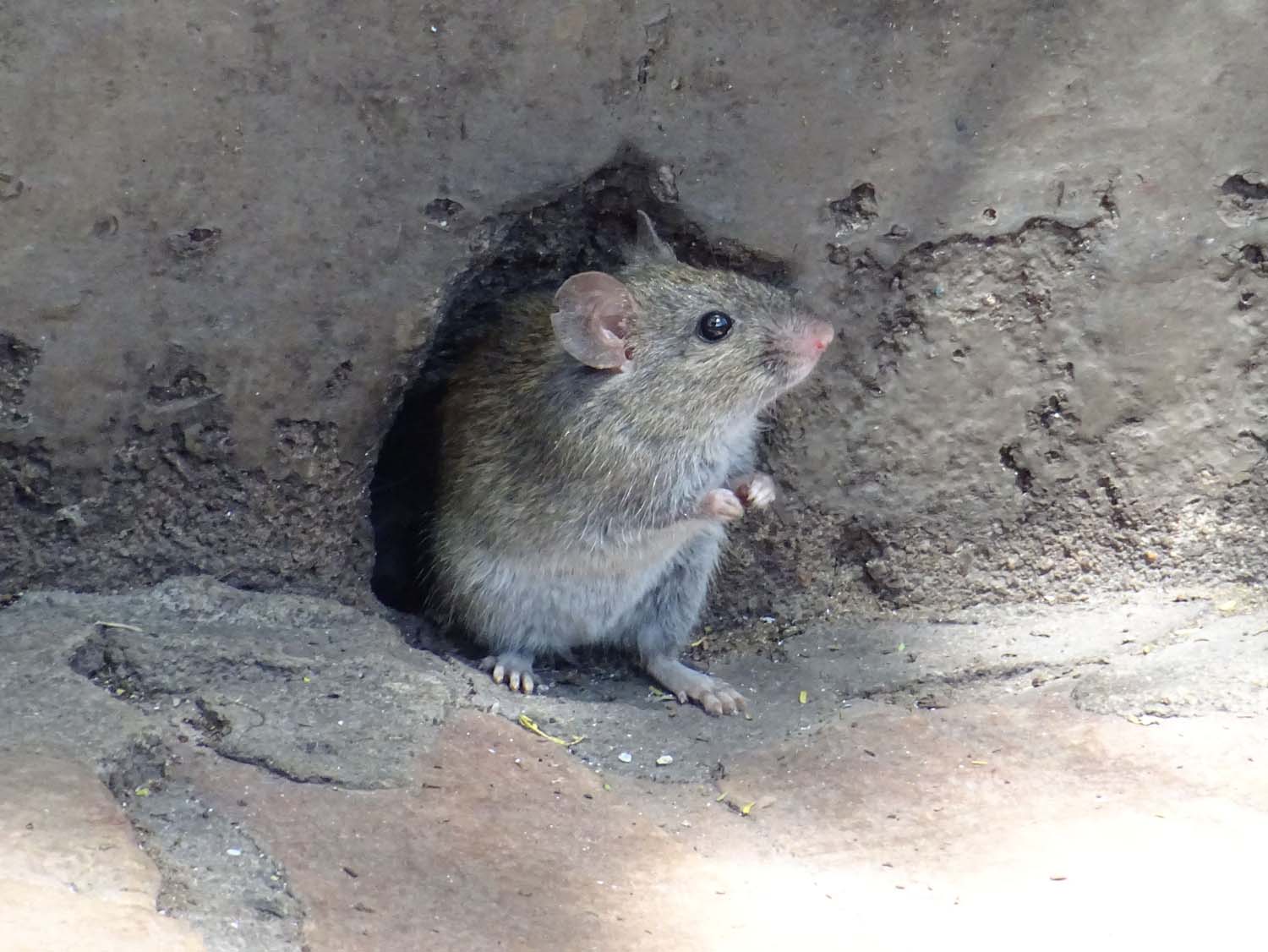 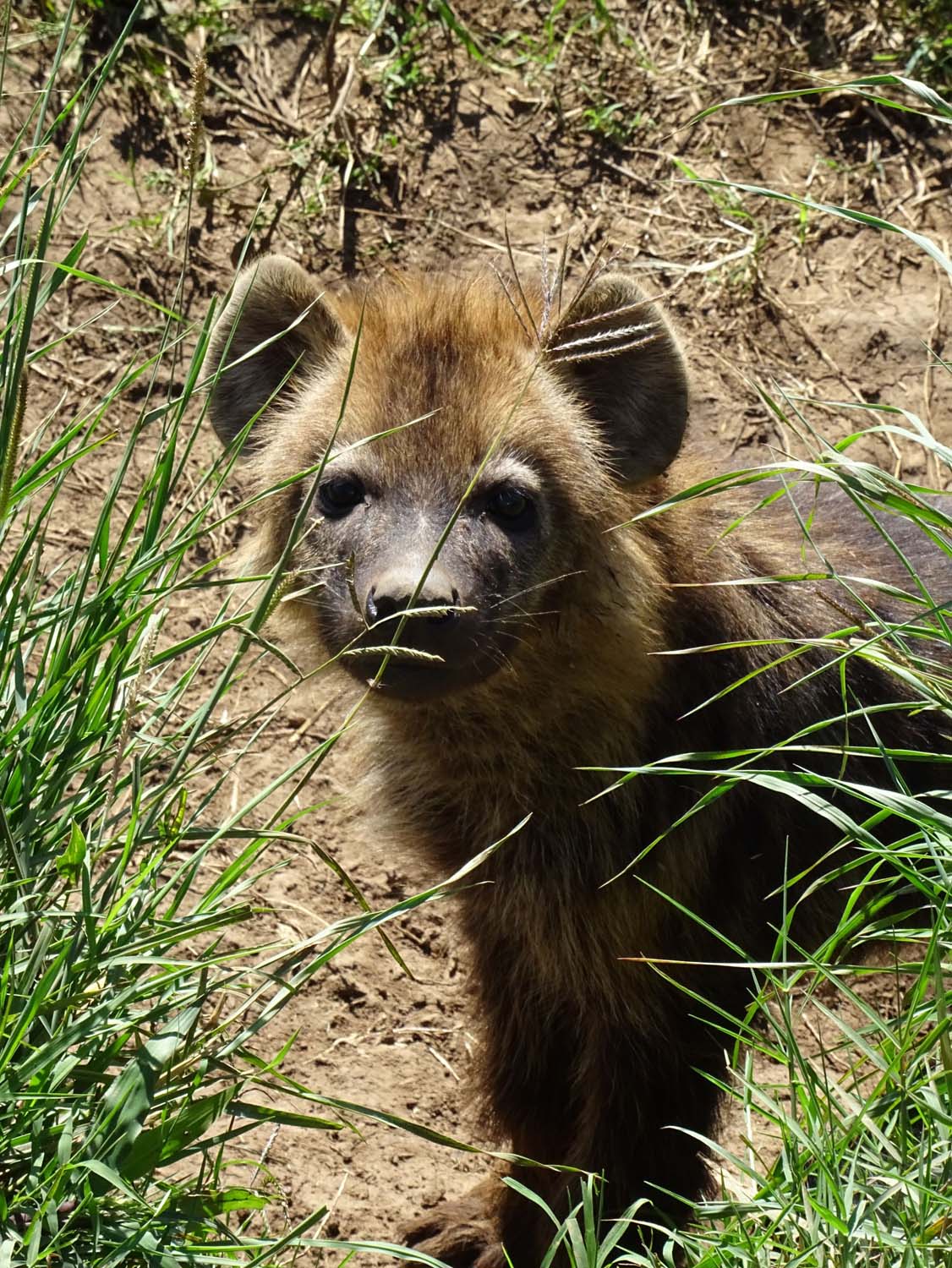 young hyena waiting for his family to come home with food 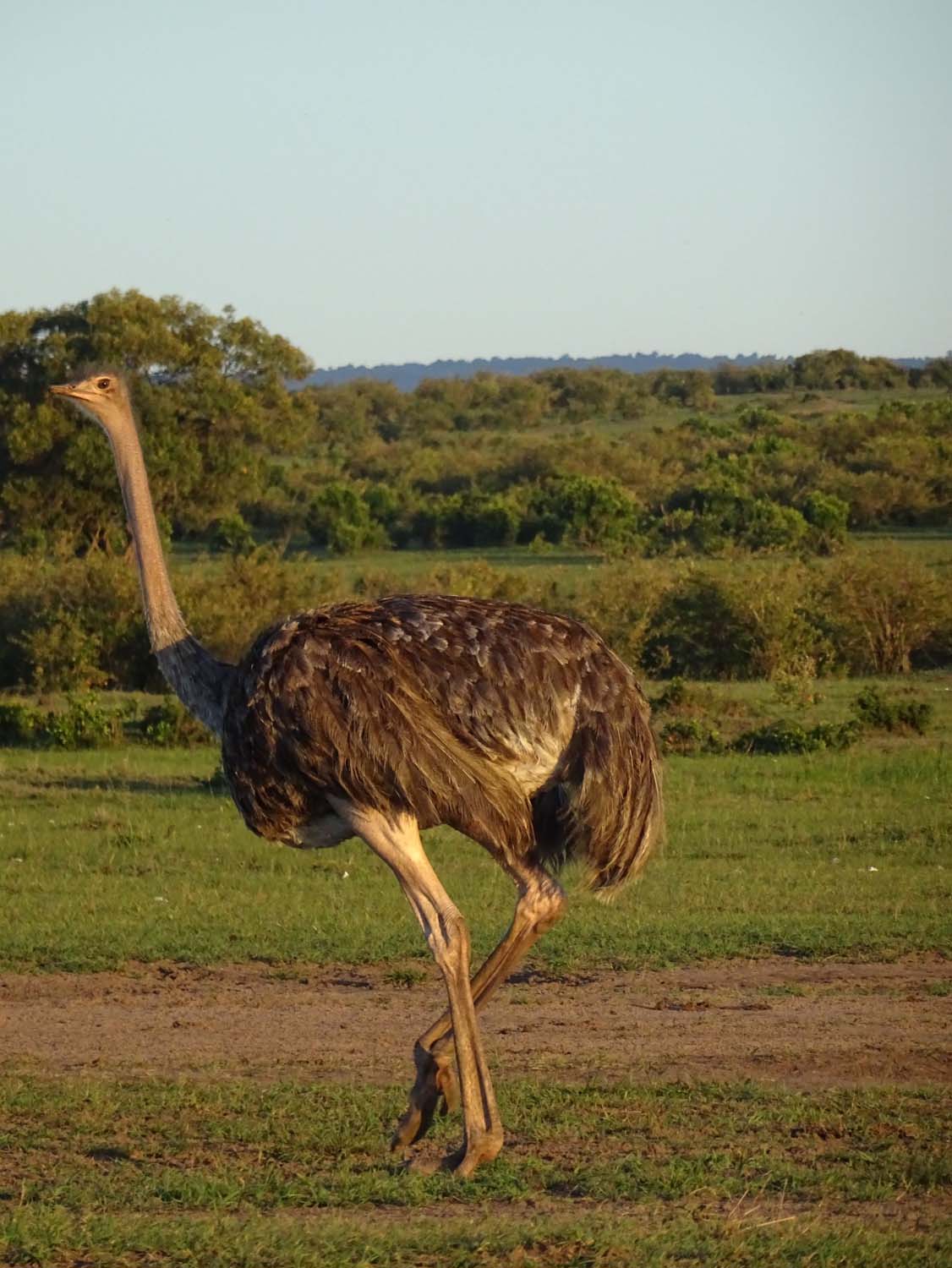 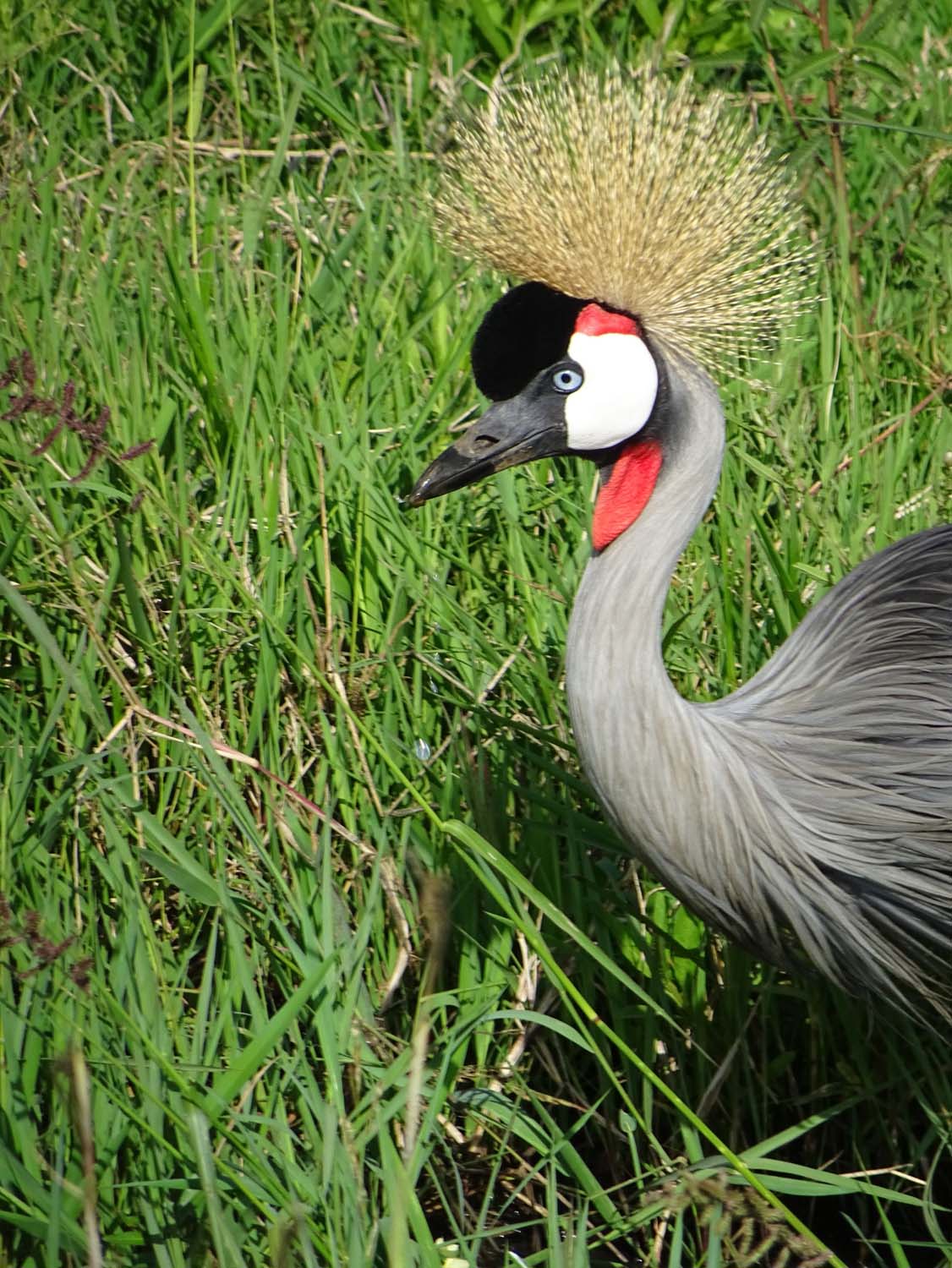 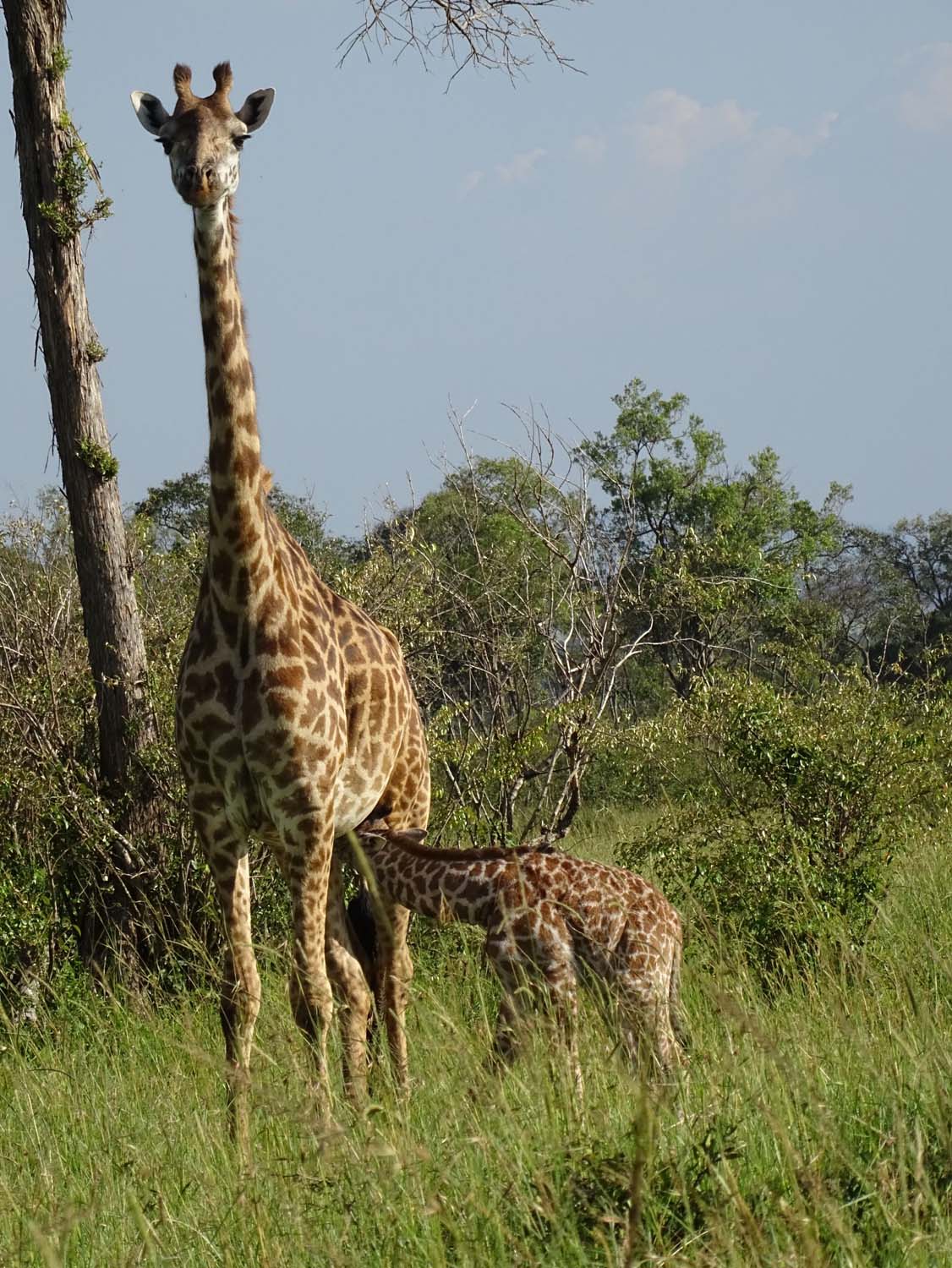 even though the baby giraffe looks tiny compare to its mum, it is over 2m tall already! 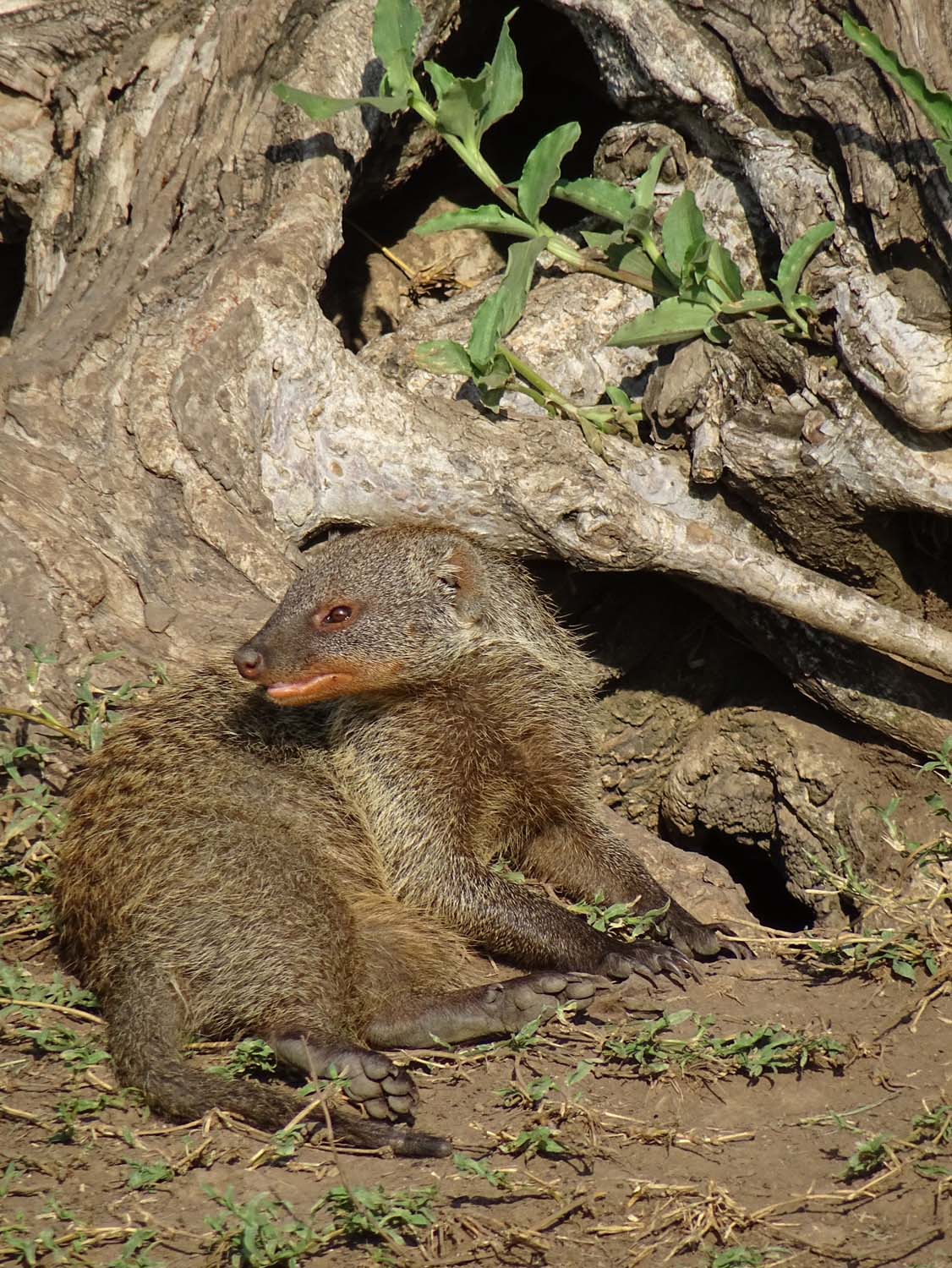 unlike most other mongoose species the banded mongoose lives in large colonies, we watched them for a long time before they set off into the distance 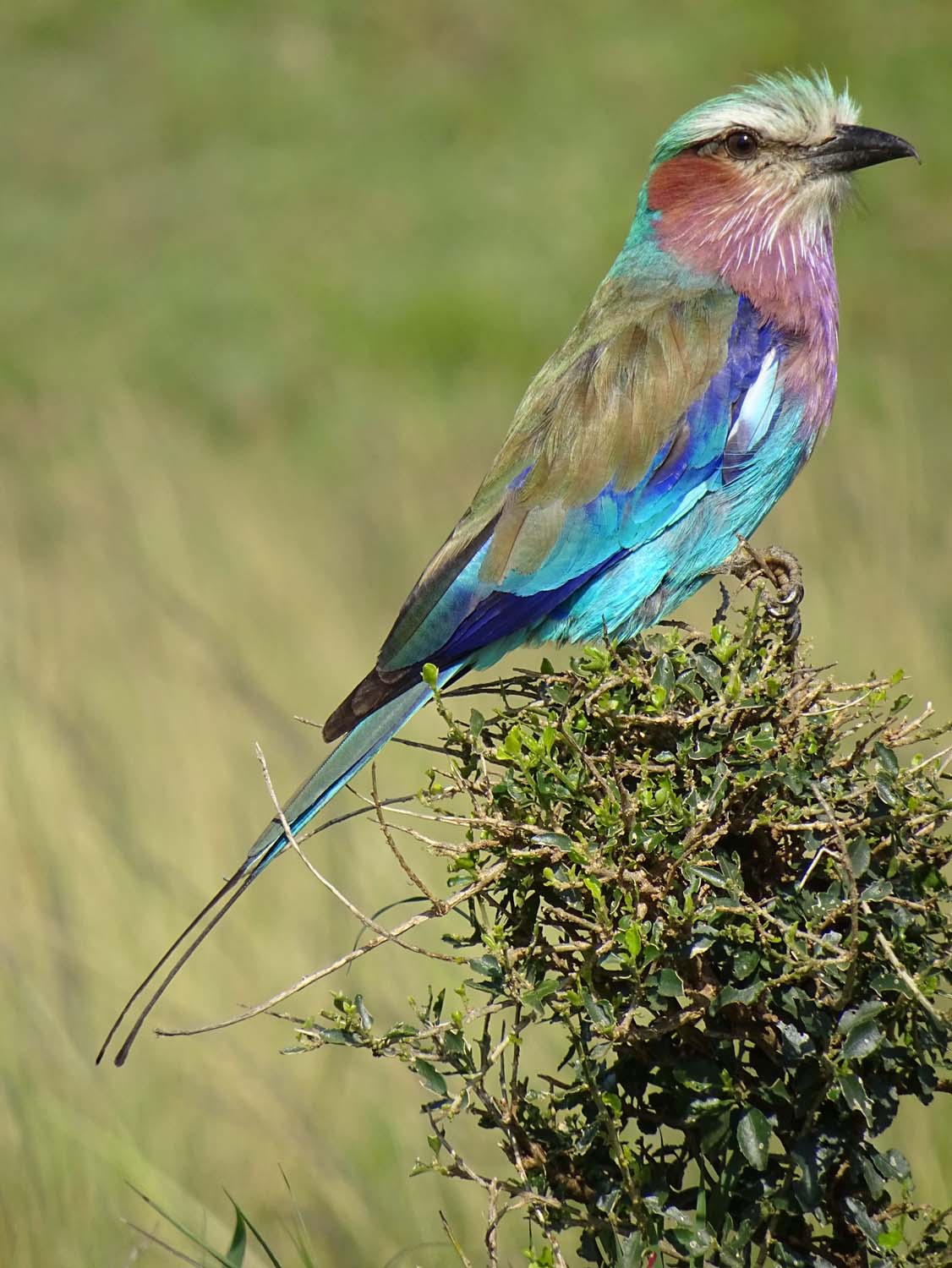 the beautiful national bird of Kenya: the lilac-breasted roller

The Masai Mara is not a National Park and not run by the Kenyan Wildlife Services, but is run by the Maasai community. In fact it is probably the worst run wildlife area in Kenya as it is riddled with tracks cutting across the plains and through the thickets and when an ‘interesting’ animal is spotted there is no ranger around to control the number of cars around the poor animal, nor is there anybody stopping the safari vans almost driving over the harassed animals. We saw a cheetah mum with 5 cubs trying to get away from the crowds, but everywhere she went the 20+ vans followed. The sad thing was that it is all the official guides / drivers who do this. All the private vehicles seem to keep a reasonable distance. We learned later from a cheetah researcher that no cheetah cubs in the Mara in the last years have survived to maturity due to this type of harassment… a truly sad story.

But luckily there seems to be a glimmer of hope. The Mara Triangle, part of the Mara Reserve to the west of the famous (famous for the thousands of wildebeest and zebra crossing each year whilst trying to avoid the crocs) Mara River is run by the Mara Conservancy, headed by a guy called Brian. He has done a phenomenal job with that area. Improving tracks, stopping the overgrazing by the cattle of the Maasai (they take thousands of cows into the reserve to graze which is not allowed, even though they have been compensated) and setting up a system where a ranger controls any sighting of ‘interesting’ animals. Allegedly he is now (since the 1st of Jan 2015) also running the rest of the Mara Reserve, which hopefully means he will be able to get that area set up the same way as the Mara Triangle. We’re keeping our fingers crossed.