Another 2 weddings, this time in New Zealand and Australia, and thankfully our lovely friends managed to coordinate their dates again so we could attend both as well as spend some quality time with them on their honeymoon.

First up was the wedding of Todd and Jenn in kiwi land. After a quick stop en route in Perth to catch up with as many people as we could, we arrived in Christchurch on Monday morning where we were picked up by Jonno and Angie. We picked up our spaceship and together with Mike we first went on a quick shopping spree before heading out to Kekerengu where we were meeting the rest of the team. 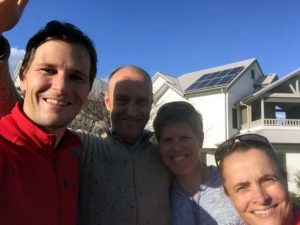 catching up with Eugenie and Helmuth in Perth 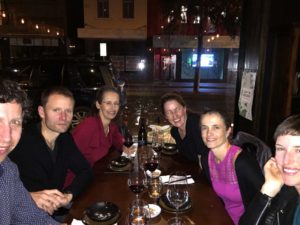 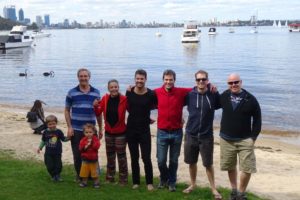 some of the peeps at the Matilda Bay picnic 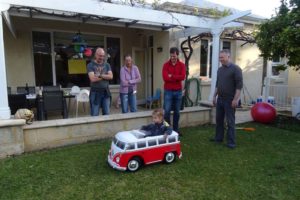 catching up with Darren, Eva, Greg, Regine and of course the triplets David, Ethan and Claudia 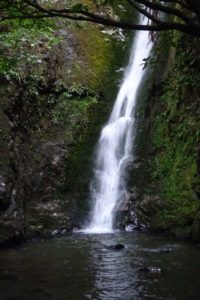 seal pups swimming in the pool beneath the waterfall, a few weeks later this waterfall would disappear due to the large earthquake in the Kaikoura area 🙁

It was rather amazing to arrive in this tiny little town, with the beautiful restaurant ‘The Store’ right on the beach, to find all our friends there. It felt like we had only seen each other yesterday and the conversations flowed easily. 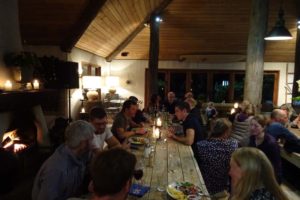 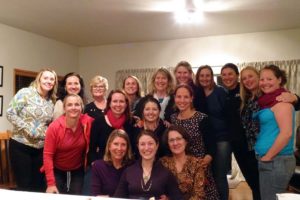 Jenn and the ladies the night before the wedding, it was a very special evening

Jenn arrived at The Store the next day driving the old 1932 pick up, one of two amazing cars from 1932 her mum and dad had driven down from the North Island. The ceremony was outside even though it was butt-freezingly cold and at one point it even started to drizzle, but luckily it stayed dry. The rest of the afternoon was held in The Store where the fires were roaring, the music inviting and the food sensational. 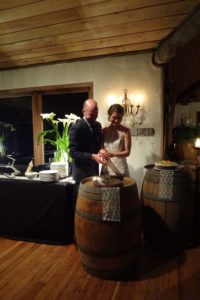 The next day pretty much everybody who was at the wedding visited some wineries, Jon got to drive one of the 1932 cars (and you couldn’t wipe his grin of his face for the rest of the day if you tried!) and Jude made a quick trip to the hospital to check on her broken toe. Not great timing before our 4-day hiking trip starting the next morning… 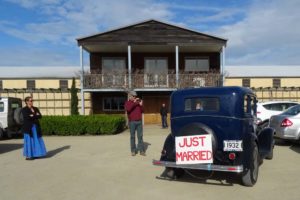 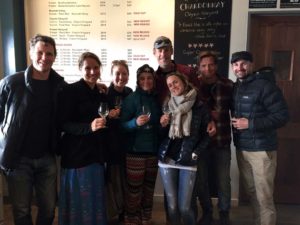 the crew wine-tasting (although we had already enjoyed the wine from this winery at the wedding!) 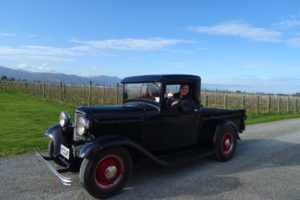 But with solid hiking boots, walking poles and some painkillers, we started the ascent a little before the rest of the crew to ensure we would make it to the hut on time. From our lunch spot we all hiked together and we finally arrived at the hut half an hour after dark, luckily the markers were on tall sticks and had reflective bits on them so we could see them easily in the dark and sticking out above the snow. 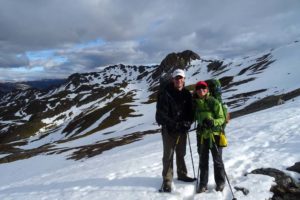 Jon and Jude on the way to Angelus hut 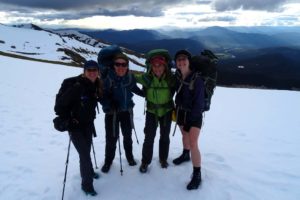 the ladies!! no points for guessing who is the (tough and honeymooning) kiwi!

In Angelus Hut Jude celebrated her birthday with of course Jon, Jonno & Angie, Tim & Martina, Mike and the honeymooners Todd & Jenn. Or Mr and Mrs Vallance as they are now called! There was cake, amaretto & wine and even a little pressie that was lugged up to the top of the mountain. It was an amazing place to spend a birthday surrounded by the best friends!

the team before exploring around Angelus hut, Jon and Jude stayed behind to rest Jude’s toe

We spent another night in Angelus hut, surrounded by frozen lakes, hard-packed snow, mountains and glorious sunshine before heading down to Sabine hut on Lake Rotoroa (not to be confused with Rotorua on the north island). A very steep descent with lots of trees down, we lost the path several times before getting to the hut and were rewarded with a quick skinny-dip in the rather crisp waters of the lake. We played more games, read books and had some soul-touching and warming conversations before we set our alarm clocks for an early start. It was a long hike out and we needed to be at the DOC office before they shut the doors at 4pm, so our plan was to start walking at 7am, with alarms set at 6. However, the next morning alarms started going off at 5am, or was it? A lot of confusion as the clocks had gone back that night and some watches and phones had obviously updated, other hadn’t… 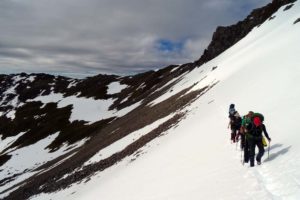 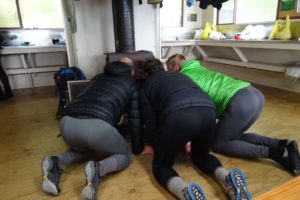 how many men does it take to light a fire?

After a very slow start to the trail due to lots of trees across the track we (Jon and Jude) decided to turn back and call for the ferry as progress was too slow with a broken toe off-track. Unfortunately we weren’t able to reach the ferry (via radio) so we started 2 hours after the rest of the team. The rest of the track was in much better condition so we made good progress, arriving on time for a sensational dinner at the local hotel where most of us had checked in. 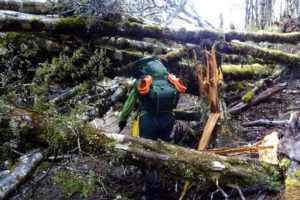 this is tricky walking with a broken toe…

Our last day with the team was spent in Nelson, and then we were on our own again, heading back to Christchurch for our flight to New Plymouth where we were catching up with Kathy & Graeme and the kids. We went for a hike around Mt Taranaki with Graeme & Ben before we all went to Rotorua for some mountainbiking. 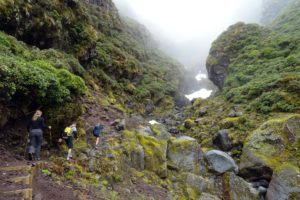 hiking on Mt Taranaki with Graeme and Ben 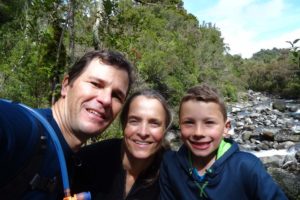 Jon, Jude and Ben on the hike back

Mountainbiking in Rotorua had been on our wishlist for a long time, but it just never happened in all the time we were living around the corner in Oz. So we finally fly halfway across the world for the fabled trails. And riding them with friends made it even more special. We rode up some trails, but also made use of the life-saving shuttle, we would have never been able to ride as much without it as we aren’t very fit… Biking in hiking boats wasn’t ideal, but the best option for Jude’s broken toe. It took a bit of getting used to not being clipped in. 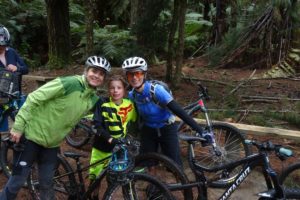 Jude, Ben and Kathy in Rotorua

Ben joined us on every ride and mum (Kathy) and dad (Graeme) took it in turns to show us the trails. One of our favourites was probably Eagle vs Shark, but there were many great trails. Having showers at the trails was perfect. It allowed us to maximise time on the trails after checking out of our motel.

Our next stop was a tiny little hamlet near Rotorua where Nadine has set up shop with her extensive collection of cats and other animals. We hadn’t seen each other for more than 10 years and it was great we had time for a short catch up before our stay in kiwi land came to an end. But not before one last stop near Auckland where Sandy and Bruce had prepared us a fantastic lunch. 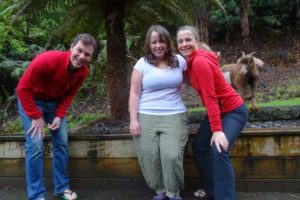 Jon, Nadine, Jude and Maisie the goat who did not want to be in the photo… 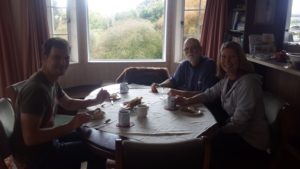 Before we knew it we were back in Oz, our Brisbane roots were calling. Daniel picked us up from the airport and we drove pretty much straight to the year 5777 where we joined a family gathering to celebrate the start of the Jewish Year. We enjoyed all the typical food (including herring!), the port and of course the apple dipped in honey to wish each other a sweet new year. It’s also handy that the Jewish holidays start the evening before as their ‘day’ begins at sunset, so we didn’t have to wait until midnight before the festivities could start.

The next day was a public holiday in Australia and we caught up for a yummy lunch at Piotr and Meg (and of course little William)’s new funky home with Adam, Michelle, Luke and Daniel. At night there was more eating and drinking in West End with the China Crew. Guy & Cheryl and Miles & Marina were around this time. As usual we compared travel stories and caught up with future plans, we’re hoping of course they will all cruise past Dar es Salaam in the next year or so with the trucks…

catching up with Daniel, Adam, Michelle, Piotr and Meg

The next day it was Tuesday. A day of shopping for Jude, working for Jon and of course the Mt Coot-tha Tuesday evening run followed by our standard potluck dinner. It was so good to be on the mountain again, surrounded by great friends. It felt great! 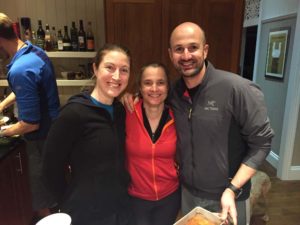 Jenn, Jude and Todd at the Tuesday night Mt Coot-tha dinner – we had to make sure we could join one!

The rest of the week was spent with more shopping and some medical appointments for Jude, meaning unfortunately that the planned trip to Adelaide had to be cancelled. No catch ups there 🙁

But we did manage another catch up in Canberra with Scooby and Michelle, before heading to Martina & Tim’s wedding on the beautiful Riversdale, not far out of town. Another great party and fantastic catch up with the usual suspects and of course meeting their families and other friends. We played games in the field and ate delicious food, most of it made by Martina’s mum! 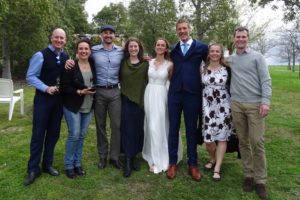 Wayno, Kate, Todd, Jenn, Martina, Tim, Jude and Jon at Riverdale for the beautiful wedding of Tim and Martina 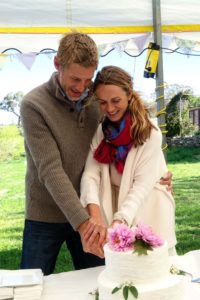 Tim and Martina cutting their yummy cake (made by Martina’s mum!!!)

The next day we had breakfast with the family, another chance to talk and admire the Defender (with camping top!) of course. And then all the goodbyes started for real. One more lunch with the crew before we drove to the airport (but not without stopping at IKEA first for some final last minute shopping!).

It was time to say goodbye to Australia, although Qantas was trying hard to keep us there by delaying the flight to Perth so we nearly missed our connecting flight to Johannesburg. They had already closed the flight by the time we arrived, but were kind enough to let us on. Pfew. By the time we arrived home we were definitely ready for a holiday. Which was perfect timing as Marjolein, Mel and Jo were due to arrive in 3 days and we were going on a short holiday with them to the Serengeti 🙂 (see Jon and Jude’s adventures in the Serengeti NP for that story)