Jon was sent to Den Haag for a course, so Jude joined him for a trip to the Netherlands and very much enjoyed sharing the business class part of the trip to get there! But luckily Jon had no complaints as he had 3 seats all for himself.

Landing at Schiphol airport was a bit of a shock to the system as it was cold, but a warm welcome from Jude’s parents made it all better! But once we arrived in Bergen op Zoom it was an even bigger shock – snow! Luckily we came prepared with warm clothes although Jon thought shorts and t-shirt would be enough for our runs… luckily Jude’s dad could provide the necessary items to make running through the snow a more pleasant experience for Jon. 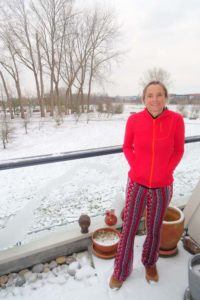 Jude in the snow in Bergen op Zoom

And that was of course the first thing we did the next day, a run through the forest with Jude’s dad. Unfortunately Jude had torn some ankle ligaments and also Jude’s dad had sustained an injury the week before. But both did ok and managed 9km through the beautiful white forest.

Jon had to be in Den Haag during the week and Jude spent time with her parents in Bergen op Zoom, including making cushion covers from khangas with her mum. On Friday we drove to Tilburg where we picked up Jon from the train station. Peter had reached 25 years with the Efteling and was allowed to invite guests for his reception at Raveleijn. It was a beautiful reception with lots of people, Peter seems to know the whole Efteling! 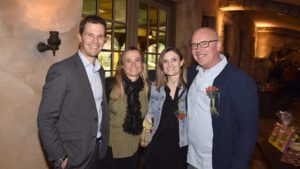 Jon, Jude, Sandra and Peter at Peter’s reception for 25 years of working for the Efteling 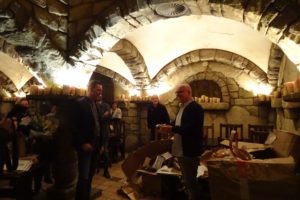 The next day Jon decided he wanted to eat mussels and see Vlissingen, so we hopped into the car and drove to the boulevard. There we met up with Richard, a good friend of Jude she had not seen in 20 years! It was great to catch up whilst walking in the sun along the boulevard. Time flies and after some drinks we continued to Yerseke to find a restaurant where they served mussels. It started off as a bit of a mission impossible without a reservation, but we succeeded in the end. 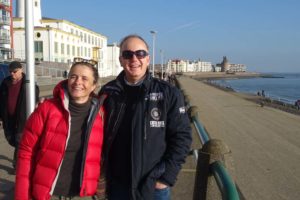 Jude and Richard on the boulevard in Vlissingen 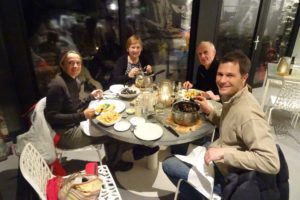 On Sunday we went for a walk in the Dintelse Gorzen where we spotted some birds and walked through lots of mud, but at least the sun was shining and it was a beautiful day. Jon again had to return to Den Haag for more work and Jude caught up with Guillaume, another good friend she had not seen in many years! They went for a long walk in the forest, drank hot chocolate before heading to ‘t Zusje for unlimited eating. A crazy concept with many people struggling with obesity, but with delicious food, we weren’t complaining. 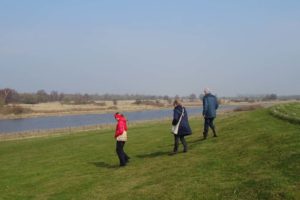 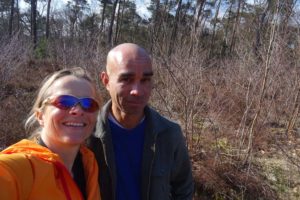 Jude and Guillaume in the forest of Bergen op Zoom

The running with the ankle brace went well for Jude and she decided to try the heen-en-weer loop (there-and-back run) again from the running club of her dad – Spado. Sadly her dad couldn’t join this time as his injury had gotten worse. Jude joined the 6-minute group again, same as last time, and enjoyed a one-hour run of exactly 10km. A great concept where everybody finishes at exactly the same time, in exactly the same spot. 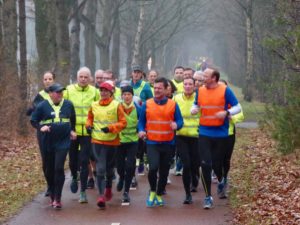 Jude running the heen-en-weer-loop in the 6 minute group from Spado in Bergen op Zoom. After half an hour at your group’s pace you turn around and run back at the same pace. Every group does their own speed / distance and returns at exaclty the same time back where we all started. A fun way of training at a constant speed.

Jude then joined Jon in Den Haag for 2 nights. The first night we caught up with Jean and Kathryn who had moved here from Dar es Salaam, they had prepared a delicious raclette with lots of cheese. We talked all night and of course one night was not enough to catch up… So, Kathryn and Jude met up for (a late) breakfast, before exploring Den Haag on foot. We walked and talked until Kathryn had to leave to open her first art exhibition in Den Haag. A shame we couldn’t join them, but we were catching up with other friends Alex and Haroz that night. And they had also prepared some amazing dishes for us at home. Gotta love our friends! It was of course way too short again to catch up, but we tried. We stayed the night and had a leisurely breakfast together before we left to catch the train back to Bergen op Zoom. 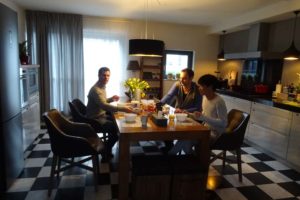 Jon, Alex and Haroz having breakfast in Den Haag

There we had to unpack and repack straight away as we were heading up to Drenthe for the long Easter weekend. Mum and dad had done all the preparation and shopping so all we had to do was load it into the car, easy.

The next day the rest of the family arrived too, just as we were about to head out for a run… we played some games, drank some coffee or tea and then went out for our celebrations of Jens’ birthday (although he didn’t know this yet…) Dinner was delicious, the waitresses’ dresses a little short and the cake for Jens delicious. 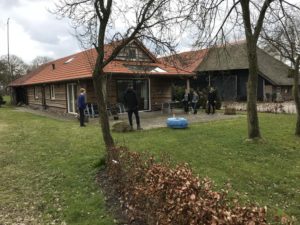 playing kubbs at our farm in Drenthe 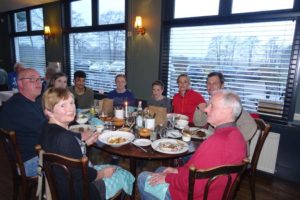 dinner at restaurant Poortmans, Jens still doesn’t know we are celebrating his birthday…

And then it was Easter, time to hide some eggs. This time it wasn’t Jude who hid the eggs so for a change she could join the search party after breakfast. The rest of the morning we all searched for eggs, lost some eggs, ate some eggs and hid some more eggs for the others to find. Always good fun for a few hours. 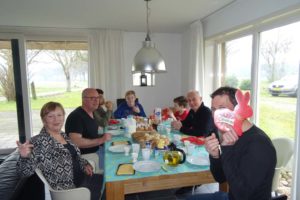 Easter breakfast before we start looking for the hidden eggs

As we were in Drenthe we had to of course visit the hunebedden (dolmens), but first we visited a small museum village (Orvelte) with lots of old farms and shops. They were selling delicious cheese so we bought some to take home: brandnetel and fenegriek (stinging nettel and fenugreek). 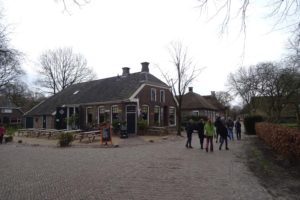 The next day we went to Borger where the hunebedden visitors’ centre is located. We wandered through the museum, learned a lot about the hunebedden and the time in which they were made. Outside the museum lays the largest hunebed in the Netherlands. It is quite impressive. Especially for Easter they had lots of people dressed up in period costume and we learned some more about fire making, leather preparing and hunting in the ol’ days. 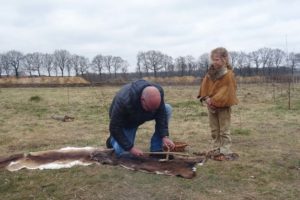 Peter learning how to start a fire 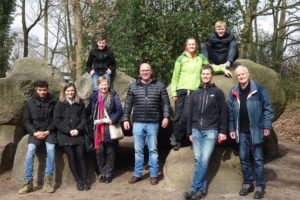 the whole family on the largest hunebed in Holland

Afterwards we still had time to do the ‘boomkroonpad’ (a walk through the tree tops) and go for a short hike in the area whilst Niels, Jens and Jessie built a hut. Back ‘home’ at our farm we went to the local pancake place for dinner with some hot chocolate to keep us warm, at night it was still pretty nippy. 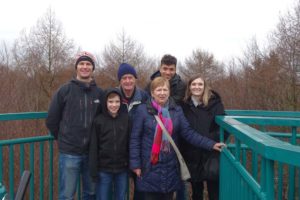 Jon then had to fly back to Dar, Jessie, Niels and Jens had to go back to school and Sandra and Peter also had to get back to work. Leaving Jude with her mum and dad in Drenthe. Jude spent a relaxed day in the nearby sauna with her mum, went out for some more runs, had her hair cut, and enjoyed a lovely dinner at the Groene Lantaarn with her parents, a great restaurant with 2 Michelin stars just around the corner of our ‘home’ in Drenthe. 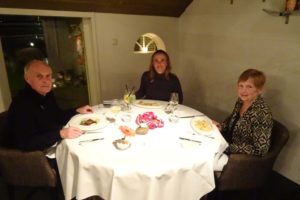 She then took a train to meet Barbara for another day in another sauna. It was way too short to catch up, so much to talk about, but great to see her again. The next day Jude met up with Gert-Jan for drinks and dinner in Rotterdam before catching up with (nearly) the entire family for her dad’s birthday. 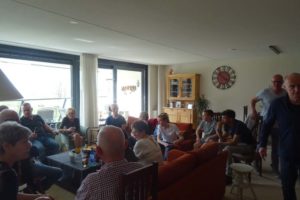 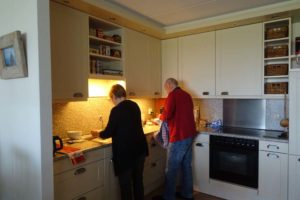 The next day was supposed to be the day Jude flew to the south of France where she would catch up with Jon and the rest of his family who were all down there to celebrate Jon’s dad’s eightieth birthday. However, Ryan Air decided that after check-in, dropping off luggage and going through security would be a good time to let people know they had cancelled the flight… only 1hr and 9 minutes before scheduled take-off… ! A quick message to tell mum and dad to turn around and pick her up and an hour queuing to hear they can’t do anything and Jude was on her way back to Bergen op Zoom…

After many phone calls, messaging with Jon and attempts to re-book something, she finally managed to get on the only TGV that was leaving from Lille in the north of France to Avignon, where she needed to be, for the next day.

If you want to know how this story continues you’ll have to head to ‘Family reunion in France‘ to find out.