The cancellation of Jude’s Ryan Air flight and booking the TGV for the next day meant an early train out of Bergen op Zoom, changing trains in Roosendaal to catch the stoptrain to Antwerp as the intercity no longer leaves from Roosendaal (as of that day). In Antwerp she had to catch the train to Lille, but unfortunately couldn’t take it all the way to Lille as there had been an accident on the tracks and she had to get out and take the bus for a section… Finally in Lille there was no platforms announced until only 15 minutes before departure, so it was an anxious wait to see if the train would go… It did, and only 5 hours later she finally found Jon waiting for her in Avignon.

Due to the strikes in France Jude had missed a day of wine tasting at the Chateauneauf-du-Pape, but Jon had bought the best one (after tasting many) so we can at least enjoy it at a later stage together. 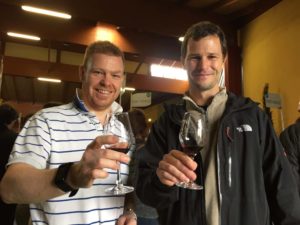 Russell and Jon tasting some of the excellent wines

The next morning was dry so we left on a run with Russel, beautiful scenery with some pretty tough hills in the area of the hotel. But it was a great start before breakfast. That day we visited a village in the area, a highlight according to Claire as some movie had been filmed here. We enjoyed the walk and the excellent hot chcocolate.

We then continued to Roussillon, famous for its ochre. Even the houses are all painted in the different shades of naturally occurring ochre. Quite a pretty sight. Of course we had to walk the ochre trail, trying to learn more about it, and practice some face painting before finishing off with an icecream in the sun. 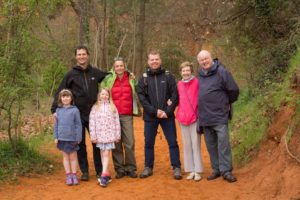 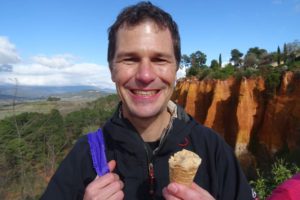 Jon enjoying an icecream in France

Jon really wanted to hike up the Mont Ventoux, which (we found out later) means Windy Mountain… The mountain is famous because of its occasional inclusion in the Tour de France, and on 240 days a year the winds blow with more than 90km/hr (this was another fact we didn’t learn until much later). Snow can be found on top of the 1,912m tall peak from December to April, although it looks like the snow is there year-round due to the bare limestone top. Olivia and Sophie both really wanted to join us too so together with Russell we drove to the mountain. It was a beautiful drive up to the barrier, which stopped all vehicle access about 4km from the top. We got out and braved the gentle drizzle and wind and passed the barrier on foot. It wasn’t long before we were walking in the falling snow, but with the wind behind us it was quite pleasant most of the time. Occasionally the wind shifted or we turned a corner and then we felt the full force of the icy wind. 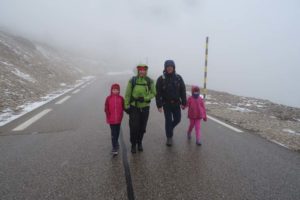 Olivia, Jude, Russell and Sophie on the way up Mont Ventoux

We kept going up and were getting close to the top, we had probably reached the ‘col des tempêtes’ (storm pass) just before the summit, which is known for its strong winds. Here we were facing the wind directly and we decided it was better to turn around as we would have to face it several times on our way down too and it was getting very cold now. We quickly turned around and braced ourselves, it was definitely cold. By the time we reached the car we were all pretty much frozen, but with the heater running, dry clothes on and some chocolate (after a proper lunch of bread with cheese of course), all was good again soon. Two brave super girls emerged from the trip… 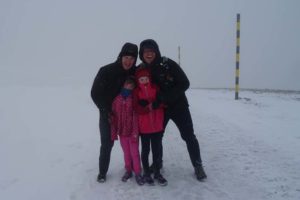 2 very super girls braving the wind, snow and cold together with their uncle and dad

After a quick stop at the hotel we quickly drove to Avignon to have a look at the ‘sur le pont, d’avignon’ made famous in the kids’ song we all sang along to, but had no idea what it meant. We still don’t really know what the song means, but we’ve now seen the bridge in Avignon, or perhaps we should say, we saw what remains of it. You can’t even cross the river using this bridge, but it’s still impressive, although a tad useless. 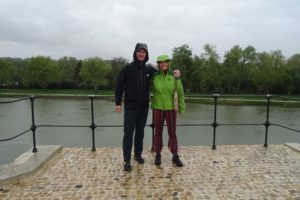 a rather damp ‘sur-le-pont, d’avignon’ that’s not really going anywhere…

On Thursday we decided to head to the Ardeche where in 1994 three speleontologists discovered the most amazing rock art ever to be found on this planet. The caves and their art are known as Grotte Chauvet-Pont d’Arc, and contain the world’s oldest and best-preserved drawings, dated to about 32,000 BC. The cave was closed off by rockfall around 20,000BC which helped preserve it all.

It was decided the paintings would never be accessible to the general public, but they made an exact copy of everything not far from its real location and that’s where we were heading. Jon’s dad and Olivia also joined us.

We first stopped at the Pont d’Arc. Another bridge useless for crossing the river, but very impressive and completely natural. This is also the location of the ‘real’ caves, the ones closed to the public. We enjoyed a great lunch with view of the arc, but had to sit indoors as it was pretty cold and wet. From there we followed the river for another 10km to reach the site of the museum, the location of the fake caves. 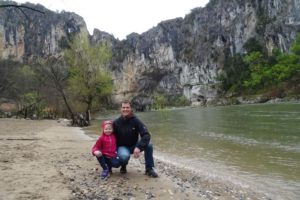 Olivia and Jon at the stunning natural bridge

But before entering the ‘caves’ we spent an hour or so learning more about the paintings, the people who made them, the animals that lived in the area during that time and the environment. It was an excellent museum. 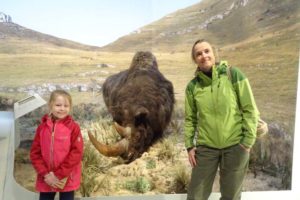 And then we were allowed to enter the ‘caves’. They were super impressive. You could almost forget you weren’t in a real cave. They had done an excellent job of recreating the perfect atmosphere, a real cave like environment as well as painstakingly recreating all the art and other features and artifacts found in the caves. It was a shame no English tour was available, but with an automated guide we made do. Apparently you have to book these caves a long time in advance in summer as they get sold out! We were lucky there was space at all apparently… 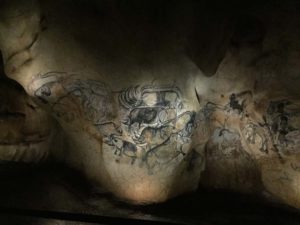 the rock art from the caves, it was simply stunning. Don’t forget this was created aorund 32,000 years ago!

On our last day in France we left after breakfast and drove to the Pont du Gard. Another bridge, this time one that does reach the other side of the river, it also has an impressive aquaduct built next to it. In fact, the aquaduct was first, the bridge came later. It’s a little strange that an aquaduct warrants such an elaborate Unesco World Heritage site, but that must be the way things are in Europe. It attracts so many visitors which means you must set up a huge circus around the attraction. 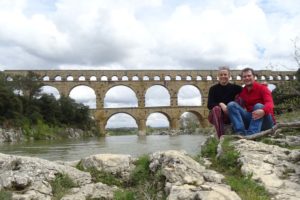 Jude and Jon at the famous and impressive Pont du Gard

From there we drove straight to Marseille for our flight to Rome. We were hoping it wouldn’t be affected by the ongoing strikes in France (why do people keep visiting this country and its yearly strikes?!), and this time we were lucky, the flight left more or less on time. If you want to know what happens next, you‘ll have to head over to ‘Rome by bike’.