Kathryn was working in Tanzania as an art teacher when she met Jean who was working in Dar es Salaam as well, but as an economist. Despite the fact she is Canadian, she doesn’t speak French, but luckily Jean, a Frenchmen, speaks English so that wasn’t a problem. Until you get married in France and the entire official wedding part is in French…. All of a sudden you find yourself being called ‘husband and wife’, and it is a tiny bit overwhelming.

We landed on Friday morning in Amsterdam where the sky was grey, and it was raining. Luckily we had a connecting flight to Barcelona where this time Jude’s bag was the first on the carousel, not like last time when we went hiking in the Pyrenees and her bag didn’t arrive at all.

The sun was shining in Barcelona and after a short delay at the rental company as it was super busy in the school holidays, we were on our way to Chateau Cavanac. Jean’s family live in the area and they had convinced the managers of the chateau to hold the wedding there. It was a stunning location.

Karina and Mark had also arrived on Friday evening from London, and we had dinner with them in the chateau. We sat outside in the courtyard garden and talked loads, it was great to catch up with them. 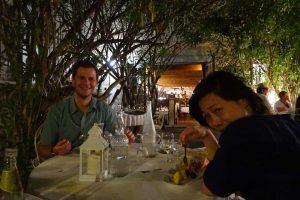 The next morning we all went to Carcassonne whilst Kathryn and Jean got ready and did the official part of the wedding. Carcassonne is an ancient walled town, with windy, cobbled alleys, many inquisition torture museums, a Gothic cathedral, and its own castle behind a moat. It is also a Unesco World Heritage Site because it is an extensively restored, medieval fortified town dating from pre-Roman times. We wandered through the charming old town, past souvenir shops and restaurants, before ending our tour with a visit to the citadel. The hordes of tourists were now arriving in earnest (we of course weren’t tourists, we belonged there as we were there for a local wedding) and it was slow going in parts of the citadel. It’s a seriously impressive series of buildings and defense walls, and we enjoyed our small dip into history. 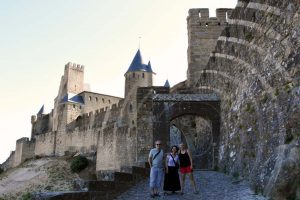 Mark, Karina and Jude at the city gate of Carcassonne

We walked out of the citadel over the ancient Roman walls and ended up near a lovely café where we had lunch and Karina left her phone. Lunch was great, but unfortunately the missing phone wasn’t discovered until we were already back in the chateau and we had to get ready for the wedding vows. 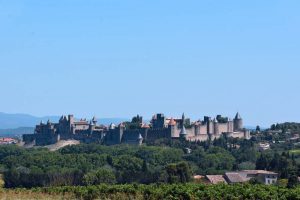 the Unesco World Heritage site of the ancient, walled city of Carcassonne

Tom and Kate joined the little possy of Tanzania-representatives as we witnessed Kathryn and Jean exchange vows in the dappled light under the many trees in the courtyard. A few group photos followed before the bridal party went off to take more photos, and we had some time spare before cocktails and canapés in yet another courtyard were served. We used our time wisely and jumped into the pool to cool off, together with Kate. 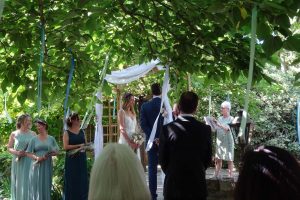 exchanging the wedding vows in English and French…

After the cocktails it was time for dinner, and yet another courtyard was used, also beautifully decorated by Kathryn and Jean and the rest of the bridal party. The tables also looked stunning, you could certainly see Kathryn had designed it all.

Food was delicious, the speeches short and very sweet, and the rap from the best man was fun to watch, although we didn’t understand it as it was all in super fast French… 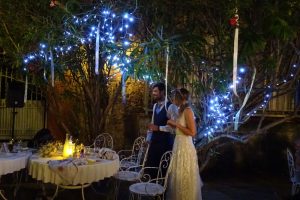 bride and groom watching the rap

At midnight we were on the dancefloor, giving it our best before flopping onto some chairs in the garden to chat with Karina and Mark, and occasionally Kathryn and Jean (Kate and Tom had already given up at this point and were sound asleep). At half past two we stumbled up the stairs and fell asleep immediately. 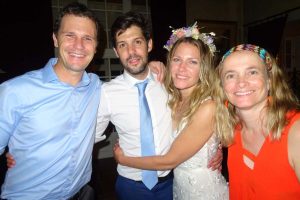 Everybody came to breakfast just before 10am, and we enjoyed food and the company of good friends for a few final hours. We all had planes to catch or drive somewhere. Kate and Tom were going camping with their kids, Karina and Mark had to pick up the missing phone before flying back to London, Kathryn and Jean were also on their way to the airport, first to fly to Den Haag before catching another plane for their amazing-sounding honeymoon in Indonesia.

And we hopped into our rental car to drive to Andorra. We had to pick up our permit and some maps for our planned 5-day hike through the Pyrenees, before the tourist information centre closed for the day.

The weekend, as always, was too short. But it had been fantastic, so good to catch up with good friends, and share Kathryn and Jean’s special day. Hopefully we’ll all be able to catch up again soon.