I don’t know who didn’t want us to get to the Pyrenees, but it sure felt like somebody was trying to stop us doing our planned hike! 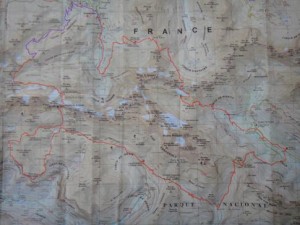 overview of the walk

Arrived 14.20 instead of 10.15 due to a missed flight from London to Barcelona (our flight was late getting into London, I watched: Black Swan, The Way Back, Tron: Leagacy, The Adjustment Bureau, Hall Pass, Unknown, Just Go With It, Mad Bastards, The Rite, Gnomeo and Juliet and The Girl Who Kicked The Hornets Nest). We waited 1 hr for our bags, but only Jon’s bag arrived. Meet Marty, pick up rental car, buy lollies and start driving towards Gavarnie (in France).

Arrived in Ainsa (still in Spain) around 8pm and decided to stay in albergue Mona de Rosa after a walk to the Plaza Mayor at sunset. Dinner at the bodega opposite our albergue. Great tapas and food. I’m very tired after missing 2 nights sleep. Next morning still no sign of bag and Qantas / BA gave the ok to buy things for the hike! 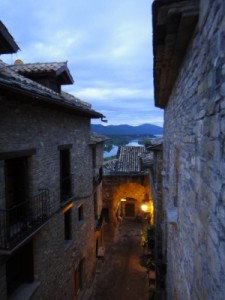 view from our hostel

Day 1: We were very lucky to find an outdoor shop open on a Sunday! We just had time for a drink before it opened at 9.30 in the cafe next door where we strategised (who is going to look for what). One hour later I had a complete new outfit (thermal trousers, sports bra/tshirt, 2 pairs of socks, shoes, shorts, waterproof pants, rain jacket with build in fleece, cap, fleecy buff, head torch and backpack, sleeping bag). We were very efficient, Marty was on backpack duty and harnass, Jon on the sleeping bag and head torch and me shoes and everything else I had to try on… 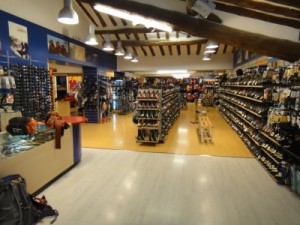 Intersport in Ainsa – the only outdoor shop in the area and it is open on Sunday!

We drove on via Bielsa to France and then via the Col de Tourmolet to Gavarnie where we hired crampons. Jon saved the day when he discovered we could drive to a carpark further up the hill which meant we could get to the Refugio Sarradets in 2hrs – just in time for dinner (7pm)! We made it. We had to put the crampons on for the last uphill on the snow as it was too steep without. We were only 11 people and all shared one table. Off to bed early in the bottom bunks and Marty snored. 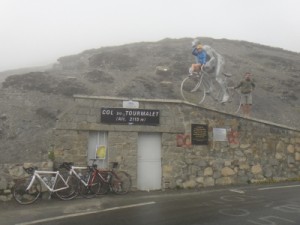 top of the Col de Tourmolet 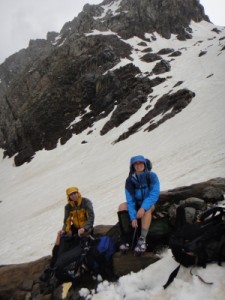 crampons on for the first time 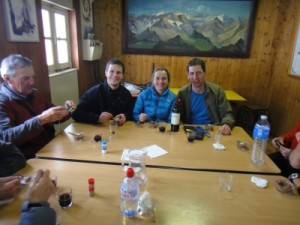 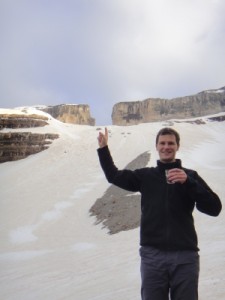 the fog lifts and we can see the Breche de Roland 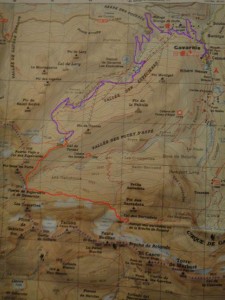 Day 2: Up at 6.00, breakfast and get ready. As it started to rain as we were about to head out, we had to change clothes again… Left at 7.30 to go straight up the Breche de Roland with the crampons and back down in the gully with not much views (fog). We had some glimpses of views but it got better when we got to the first lake where we turned west into the valley to go up and over to the next valley which we followed down to the start of the Faja de las Flores. 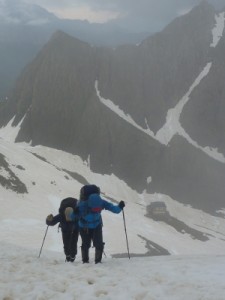 hiking with our crampons to the Breche

Again quite a bit of fog but it cleared up at times to reveal some spectacular views of the Ordessa Canyon. The Faja looked rather daunting and we (Jon & Marty) weren’t sure if we wanted to do it. I went for a look and thought it was fine and luckily the boys agreed. It was a spectacular walk with sometimes amazing views when the fog lifted. The Faja is in places about 1m wide and has a massive cliff on one side and a significant drop on the other side (about 1000m)! 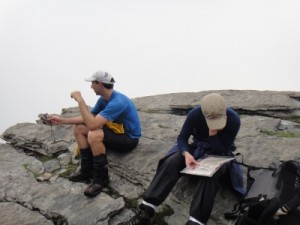 the boys looking at the start of the faja de las flores, not certain if they want to walk it… 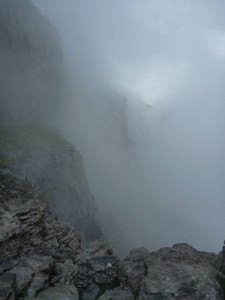 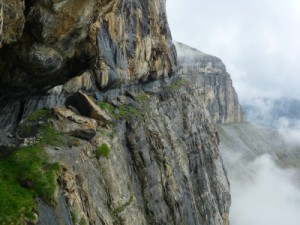 Jude is sent out to explore the Faja de las Flores

On the way back to the first lake the sun came out (it was meant to rain 200mm today, but luckily we didn’t get that much) and it was awesome walking. We had to cross quite a few crevasses to get to the first lake and saw quite a few marmots (8) and izards (about 40 or so). From the first lake we had one steep-ish climb and then it was a very easy hike to the refugio through some snow in the valley, some rocks down and a river crossing about 100m before we reached the refugio. It started to rain heavily about half hr before we got there unfortunately so we still got pretty wet. The refugio is great, again crocs for use in the hut and this time we got the best beds number 1, 2 and 3. Easy to reach and plenty of height for our heads. We had a great dinner with a few others on our table. Again only a few people here (18) and went to bed straight after it (around 8.30!). 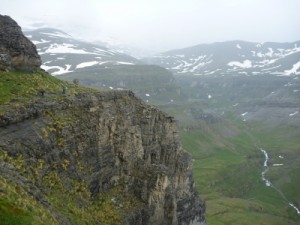 checking the route and looking back at the Breche de Roland 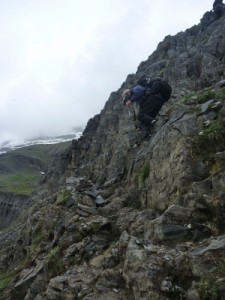 going steep down towards the Refugio de Goriz 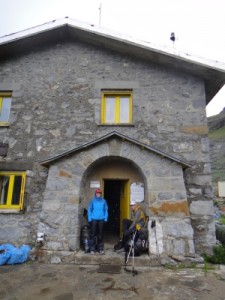 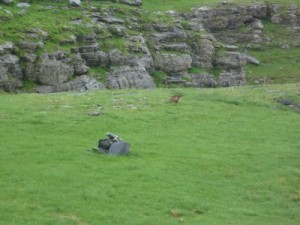 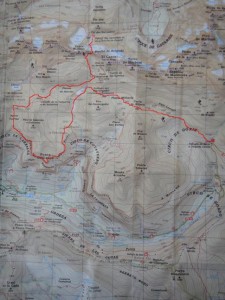 Day 3: We wanted to get up at 6 again, but I woke up and it was already 6.30. Alarm didn’t work… We had another great breakfast with a massive hot chocolate – yumm. Left the Refugio de Goriz at 7.45AM and didn’t arrive at Refugio de Pineta until 5pm! A big day with 900m of ascent and 1800m of descent over 12km…! Very tough going, especially the second descent of 1200m. Disco legs all the way. We also crossed some freezing cold rivers and had to take our shoes off every time (Marty 3, Jon 4 and me 5). Refugio de Pineta had hot showers! But this time dinner isn’t until 8.30PM (all the other refugios have dinner served at 7pm). After showers we drink wine until dinner is served. Not too many discussions on the route today as it is pretty straight forward for tomorrow. Hopefully the weather forecast is correct for tomorrow as sun is predicted! 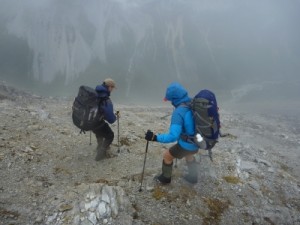 start of the long hike down to the Refuge de Pineta 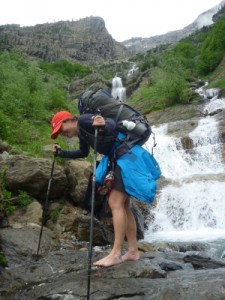 that water was extremely painful as it was so cold!

this one was deep! 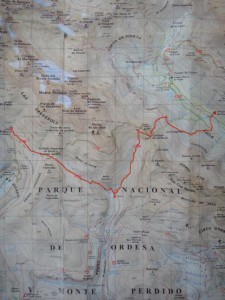 Day 4: 5.45am the alarm went off, breakfast in the dark and pack up again. Start of the day on the road was easy, until we saw the sign for the balcony… which (it turned out) pointed the wrong way! That was the first time of the day we got lost. Back tracking and on the right track to the bridge and waterfall. It didn’t take long to lose the trail again. This time we made up our own track and pushed on. Not much later we were back on track for our big ascent of the day: 1200m in 3km. We reached the balcony and had awesome views and sunshine. 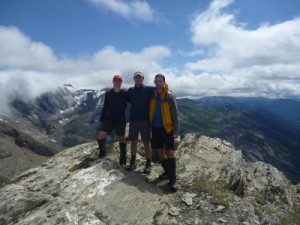 A few minutes later the fog rolled in and apart from a few views down the next valley we didn’t see more than 50-100m. Crampons on and on our way to Lake Marmores, losing the way again in the fog. Luckily we bumped into the only people of the day whose footprints we could then follow to the Col de Tucarroya. Again a challenge to find the way to the Col as the footprints disappeared… At the top of the col was the highest refugio of the Pyrenees at 2666m. Quite impressive location, views would have been awesome if the fog wasn’t there… 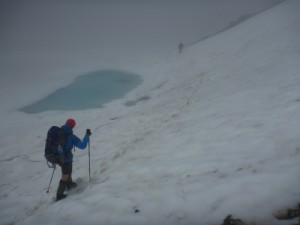 past the frozen lake 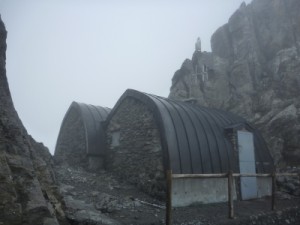 refuge in the breche

creating a path on the steep slope down (45-50 degrees)

Then down the very steep slope on the other side. Marty and Jude taking it in turns to create steps, Jon trying to simply survive (only just – great effort with his fear of heights). We find the next col alright and then try to find the track to the next one… We find a trail that looks to go into the right direction, but it turns out to be a major mistake. We lost at least 1hr there and had to backtrack and try another trail. Without any visual aids and so many tracks without any markers it’s not easy… This time we’re lucky and finally make it to the col de Hourquette D’Alans. We then assume it’s an easy 1.2km to Refugio Espurgettes, but no viz, many trails and no markers make for an interesting last bit of the hike. Finally we see man made structures and a sign! 200m to the refugio (and we still can’t see it until we’re about 30m away!) They are happy to still make us dinner and we quickly get changed into dry gear (we’re the only ones there!). 8pm dinner and we’re ready to go to bed soon after. 12hrs of walking up and down, it was another long, but great day – very tired now and ready for bed! If the weather stays like this we’ll walk straight out to Gavarnie tomorrow, but if there are views we want to walk to the highest waterfall of europe and check it out from a different direction (we already saw it from the first Refugio Sarradets). 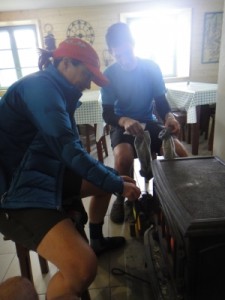 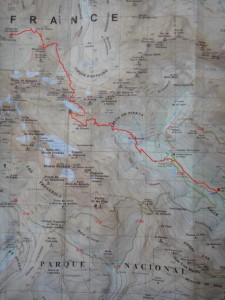 Day 5: The next day we get some glorious sunshine so we decide to walk to the Cirque de Gavarnie with the highest waterfall in Europe. 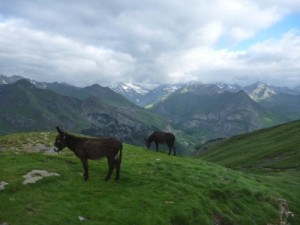 2 donkeys and an amazing view 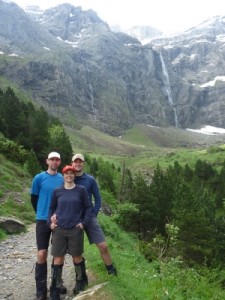 the highest waterfall in Europe in the Cirque de Gavarnie

It’s a beautiful hike, a bit like another Faja in places and we see around 6 or 7 vultures from close by. Unfortunately the hotel is closed so no hot drink and apple pie 🙁 We continue to hike to the village and finally we find something that’s open. 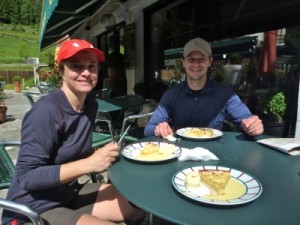 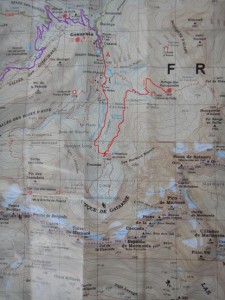 Now all we have to do is find a lift back to the car… We are very lucky when a ranger (Flavienne) stops, he doesn’t go to the parking where our car is, but a few minutes after he drives off he is back and drops us off at the top – so nice!. We pick up Marty, load the car and we’re on our way back to Barcelona.

It’s quite late when we return so we find a cafe with wifi for a drink, find a luxurious 2 bedroom 4.5 star suite for €60 near the Ramblas and have a nice dinner.