Back on the road

As you might remember, when we picked Lara up from Styromax, she had a new and shiny white box on her back. It looked awesome, but to get a box that size on her back we have had to take her rear seats and doors off, leaving us with a big open space behind the driver and passenger seat. Oh, and she also didn’t have a roof over the cab anymore as we had to take that off too. Now that we had a walls and roof for the palace, it was time to turn our attention to connecting the cab to the palace. 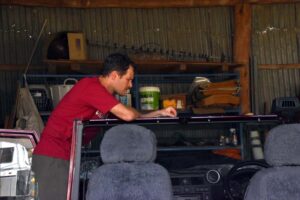 We met Bernie as we were talking to Paul (he made our sub-frame). Bernie rocked up in a 6×6 Defender and as we were looking at it, we started chatting. He builds camper trailers and camp kitchens, and looked like a guy who knows what he’s doing. So when we picked up Lara that day from Styromax (weeks ago now), we dropped her straight off at Bernie’s workshop. Not far from Paul’s workshop. 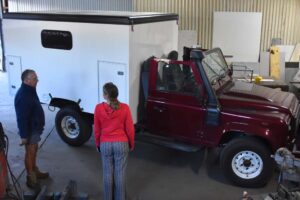 Lara parked in Bernie’s workshop, note the gap between the big white box and the driver and passenger seats

Bernie did an amazing job connecting the cab to the palace, and also building the rear light bar so we could actually drive her home instead of having to load her onto the back of Ingo’s trailer again.

Somehow we had managed to leave a gap that was big enough for the old rear wall to fit and Bernie made it look like that section had always been there. He also chopped the roof to size and, with an additional strip of aluminium, glued it to the white box. Another strip went over the top, connecting the reinforcement bar in the roof to the white box as well, making sure that our roof rack and box would not create any dramas. 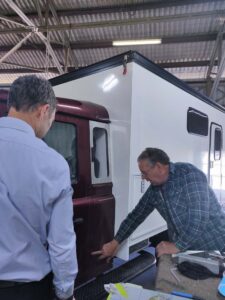 Jon and Bernie looking at progress, the bottom section fits perfectly and the cut-out for the new window has already been made 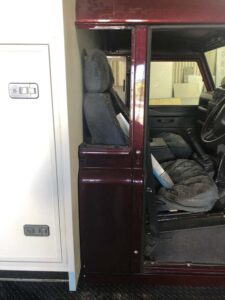 there is not much space left behind the chairs 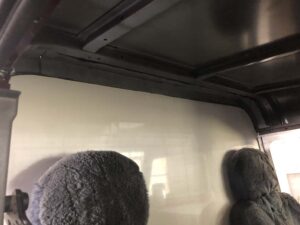 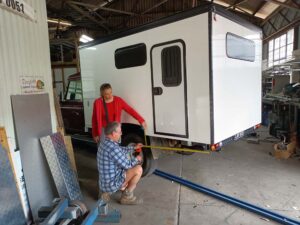 Bernie and Jude measuring the rear section for the trim

We drove her home from Bernie’s workshop after he had taken the measurements for the toolboxes that were going to be fitted underneath her sub-frame. He had a trailer to build and needed the space in the workshop, and we had some cabinets we could get started on if we brought her home. In between working on the trailer he would create our toolboxes and trim. 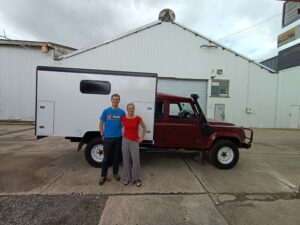 she’s ready to go home now, we’ve got new rear lights, and there is no longer a huge gap between the cab and the palace…. and, we even have a roof again over our heads

It was lovely to drive her again. She felt fine and there was no ominous creaking coming from the connection piece between the cab and the palace…. a good sign!

Jude then spent a day at the workshop when Bernie had made the first toolbox so he could test fit it all before sending it to Paul for powder-coating. As there was a Christmas break in between we had to wait a little longer before it was all done, but on the first day of the new year (on a Saturday!), Bernie came up to Esk to fit the new toolboxes as well as the trim. The glue had to dry at least overnight, so this was a perfect way for us to leave it without having to drive it anywhere. 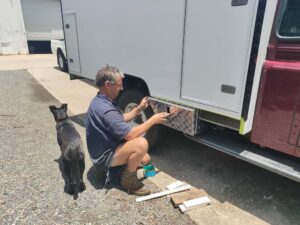 Bernie test fitting the toolbox, that’s his dog (also called Ruby) behind him 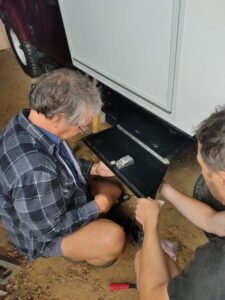 Bernie and Jon fitting the toolboxes and the lock 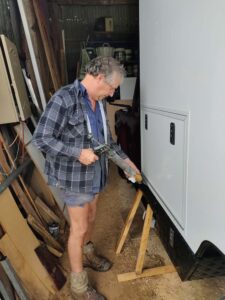 Bernie finishing the toolboxes and trim, just adding a bead of sikaflex to protect it from any dirt getting in

So now she is looking very cool, with new toolboxes, a shiny black trim around the perimeter and even the roof rack we ordered about 5 months ago had finally arrived. 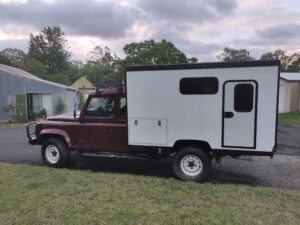 it might be hard to see, but look closely and you can see the new toolbox and trim (both made of black checkered plate) on the side of the palace.

What do you think? Do you like her new looks?