Last year the weekend of the 10 to 4 mountain biking race started quite disastrous (see Riding with the Kenyans) and this year was no different. It seems there always have to be a few things that go wrong in this weekend…

Initially things began well, and with the car packed and ready to go, Jude picked up Jon from the office at 3pm sharp. It’s a long drive and we didn’t want to drive too much of the road in the dark, but due to work we couldn’t leave any earlier. Hafiz had already left at 9.30 that morning and Jude received a text from Helen at 12.30 to say they were on their way as well. A few others had already left the day before (as they were riding both the Friday and the Saturday’s race) and were going to keep a space for all of us to pitch our tents.

In Karatina we stopped at the petrol station to fill up and empty out (our bladders) and swap drivers. As we left the pump a matatu drove towards us and we tried to avoid him by turning left. Oops, the bollards that protect the petrol pumps were on the left and we managed to put a good dent in both doors on the passenger side… 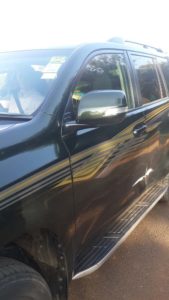 our car with a few additional curves and scrapes…

Leaving Karatina we noticed the huge traffic jam going the other way, but to our surprise hardly anybody was using our lane to overtake this traffic jam (the usual tactics in Kenya). It soon became clear why, the military and lots of police were out keeping our lane free (probably to allow dignitaries to use it against the oncoming traffic). We passed kilometers and kilometers of cars, but had no idea why. And then the messages started coming in from our friends who were also on the road.

In a small town further up the road, the police academy had their graduation ceremony and the president had driven up for the occasion. Blocking all roads around this small town. Hafiz had been stuck for 2 hours on the same spot and Helen, James, Julius, Roua, Steve and Ian had turned around and were trying to avoid the spot (we didn’t know this at the time). Blissfully unaware of this, we drove on. Until we got stuck in traffic as well! Our standing in one spot only lasted 20 minutes and then we slowly moved on. Traffic was still bad, but we were moving. And with some interesting maneuvers in the little towns, we eventually turned off the tarmac around 8pm. A bit over an hour later than we had hoped.

You’re not there yet though when you turn off just after Timau. There is still about 1.5hr of dirt road to tackle, through fields and forest and eventually the typical African plains before we would arrive at our camp site. Trying to remember how to get there instead of bringing any of the instructions meant we were delayed by another 10 minutes as we drove around in circles, but seeing the elephants, the white-tipped mongoose, the bush-babies and some impalas made up for the last bit of delay and soon we saw Hafiz standing by the side of the track indicating the location of our home for the next 2 nights.

To our surprise we arrived before Helen and the rest, and even Mark showed up later even though they had left Nairobi before us… We all pitched our tents quickly and prepared our bikes for the next day before shoving our food into our mouths. Alex arranged a driver to take our car back to the camp site so we wouldn’t have to pick it up after the ride and we loaded our bikes plus Hafiz’ bike into our car. Ready to go.

This time we didn’t oversleep and after a good breakfast we started the drive to 10.000 feet up the slopes of Mt Kenya where we would find the start line. A little less frantic than last year we got to the start on time and not long afterwards we were off, across the grass into the forest. No attacks from dikdiks this year, but not long after the start Jon indicated a problem with his gears. He couldn’t move out of the gear he was in! “I’ll catch up, keep going” were the famous last words when Jude left him. He never did and we ended up finishing separately this year 🙁 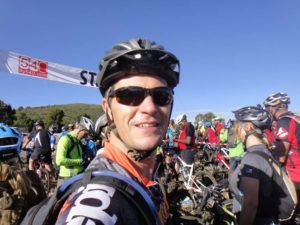 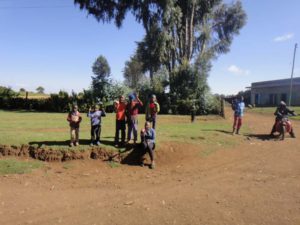 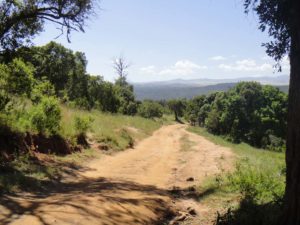 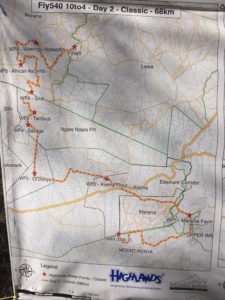 The first 50km of the course literally flew by and before we realised it was time to turn left (right turns straight to camp and finishes in 56km, left adds another 18km to make it a total of 68km). This is also the section where most of the uphills can be found, and this year had a surprise twist to the route. Due to elephants in a certain area on the course they had made last-minute changes and re-routed us along the top of a ridgeline. Spectacular views, but where we were able to ride everything last year, we all found ourselves pushing some of these very steep trails, covered with loose rocks. Even sections of the downs had to be walked or risk a massive stack due to the dangerous combo of fatigue and those loose rocks. 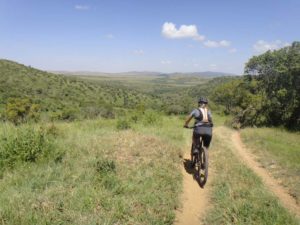 Helen on the ridgeline 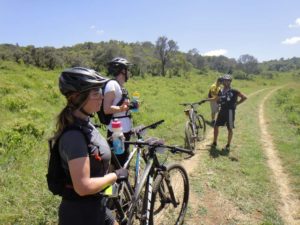 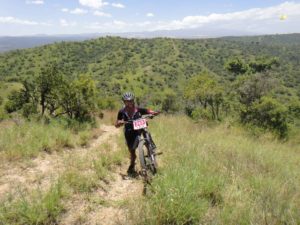 We both survived the ridgeline without stacks and enjoyed the views, including the massive herd of elephants below in the valley (probably where we rode last year?). And then, on one of the fast sections after the ridgeline, a whole herd of impalas were spooked by something and started running across the track, right in front of Jude! She had to slow down to make sure she could see where they were coming from and where they were going to make sure there wasn’t going to be an impala pronking right into her. But it was an amazing sight! They are so big! And the jumps they make are enormous, both in height and distance! A truly amazing experience!

The rest of the afternoon was spent lazing about, eating and watching the prize giving, again done by Paul Sherwen. Around 5pm we realised it was time to head out with the car for some animal spotting and sundowners with Helen & James (the rest was sleeping). Borana Conservancy has the big 5 which we failed to spot, but we did bump into a massive herd of elephants who were roaming around our chosen sundowner spot on Lizard Hill. 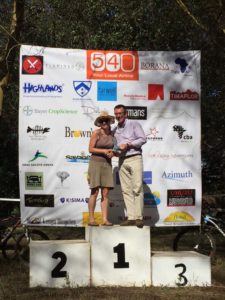 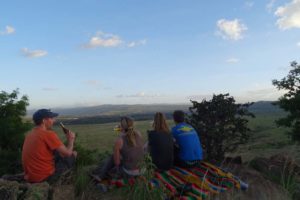 our favourite sundowner spot on Borana, looking down onto the elephants beneath us

The next day was a sleep in, getting up around 8 to have breakfast, pack up the car and explore a bit more of the conservancy. This time Hafiz joined us and we visited the Borana Lodge for a cuppa. A fantastic location with great views of the ridgeline we rode the day before. Who knows, maybe we’ll stay here one day too… 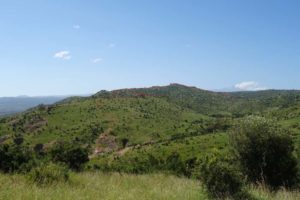 On our way back there were rumours that the president was in Karatina, so we decided to head back straight away, missing lunch in Nanyuki and instead eating on the road. It turned out it was false alarm, but it did mean we had a chance to visit the biggest shopping mall in East Africa – Garden City. We only had one mission and that was to check out the South African supermarket which sells camping gear (another rumour). This time however, the rumour turned out to be correct and we happily drove home with our new camping table and chairs. Looking forward to testing them on our next camping trip! 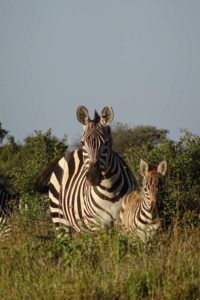 two cute zebras wondering where we are going… 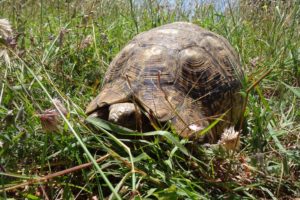 wildlife on Borana comes in all shapes and sizes 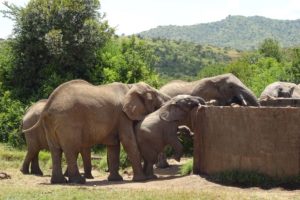 these elephants make use of the waterhole on Borana, the little ones have to be quite acrobatic to reach the water