Riding with the Kenyans

You might remember we told you about all the running we do with the Kenyans? As well as running we have also discovered the mountain biking scene after we arrived here. Joining one of the local races soon after arriving (the Koffee Trofee, around the coffee plantations north of Nairobi) was the best thing we could have done. There is a very active, low-key and intimate mountain biking scene here. And the best way you can find out about rides and races is to enter a race and meet all the riders there! 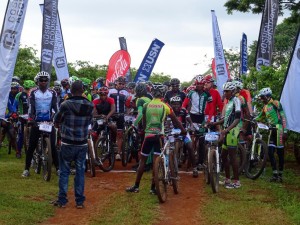 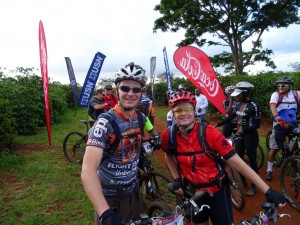 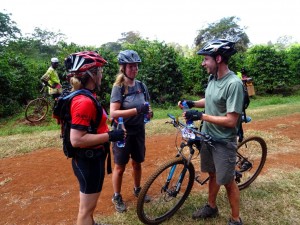 Jude, Helen and James at the finish

We made a few good friends at the Koffee Trofee and have since gone away with Helen and James for a non-mountainbiking weekend at Umani Springs and joined Gerald, Steve, Elliott, Shane and Ben for a social ride whilst checking out the course for the Ngong Challenge,  helping to clear the track and build some roll-overs along the way. Maybe this gave Jude the necessary advantage to win the 30km female category of the race the week after? 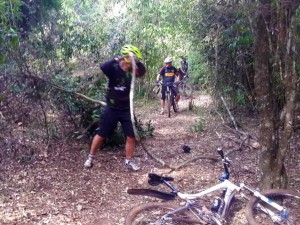 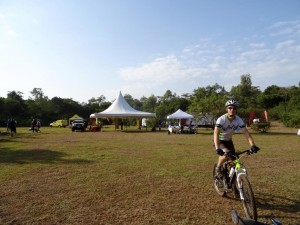 Jon getting ready for the start of the Ngong Challenge

One popular ride on the Kenyan calendar is the 10-to-4 where you start at 10,000 feet up on Mt Kenya and ride (not all down-hill, but a lot of it) down to 4,000 feet. The 70km ride ends up in the Borana conservancy, again on the Laikipia Plateau, where the campsite is as well.

Of course we signed up for this very well-run ride where all proceeds go to the conservation of the Mt Kenya area and one Friday evening we drove down to the Borana Conservancy on the Laikipia Plateau. We arrived quite late and soon found Helen and James who had kept us a camp spot. Then things started to go wrong… Jon drove over his helmet with the car and we broke our tent pole pitching our brand new tent for the first time. There were also a lot of thorns around from the acacia trees all around us, so with the tent already broken we decided to sleep in the car instead to avoid puncturing our inflatable air mattresses.

The finish line is at the campsite, at 4000 feet but that means that very early in the morning you have to get yourself and your bike to the start line, about 1.5hrs drive away as the tracks are quite rough. We had organized a lift for our bikes in a big truck and were told we would easily find a lift for ourselves the next morning: “just stand by the track heading out of the campsite around 6AM and you will get a ride easily” they said.

That might have worked, but unfortunately things continued to go wrong this morning and neither of us heard the alarm, and being inside the car meant we never didn’t hear literally hundreds of people leaving around us… We woke up at 6.45AM, panicked and decided to take our own car up to the start as there was no one else left to give us a lift! Breakfast was eaten on the way as we flew out the gates. I don’t think anybody ever did that drive as quickly as we did that morning!

We made it to the top in record time (45 minutes) and on time – just. Jon was sent off to fetch the bikes from the truck and Jude was sent out in a frantic search for somebody who could drive our car back to the start (so we wouldn’t have to spend 3-4 hours picking it up after a long day’s riding). 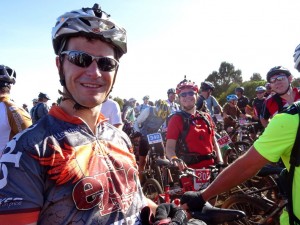 Finally things started working out for us and within 10 minutes we had it all sorted and were at the start line, ready to go. We rode together the whole day, and apart from Jon nearly being knocked off his bike by a panicking dikdik (small antelope), the 70km went by without any punctures or other problems. We finished and were welcomed in by Paul Sherwen (of legendary Tour de France commentating status), we’ll definitely do this one again next year. 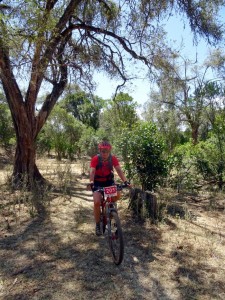 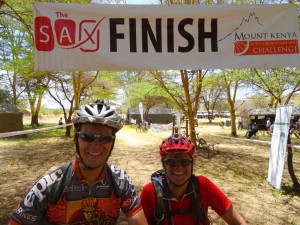 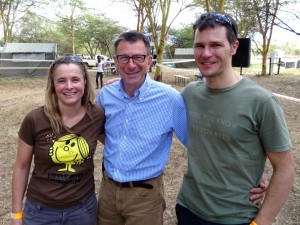 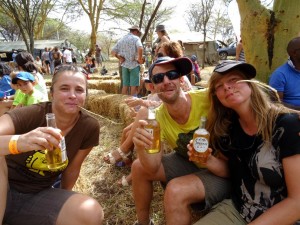 Jude, James and Helen enjoying a cider after a fun day out on the bikes 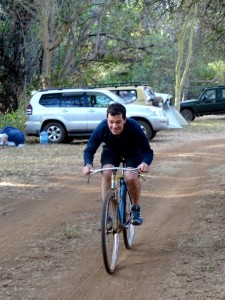 We also learned about another type of riding here we had never done before – self-navigating in teams of 2 with the help of a GPS unit and a pre-loaded track in race format with staggered starts. The big 5-day event is in September and is called the Rift Valley Odyssey (RVO), but throughout the year Eric organises a few 2-day training events with the same format.

The first one was RVO Malepo Hills, only a short drive from Nairobi and team Woop Woop entered the mountain biking scene in Kenya, again arriving late on Friday night after a stressful drive through traffic. This time we were lazy and had booked a tent with mattresses to avoid more tent breaking and no risk of punctures in our inflatable mattresses. It was a fantastic ride, both days, through wild and remote countryside and we even came away with the first mixed team trophy for team Woop Woop. 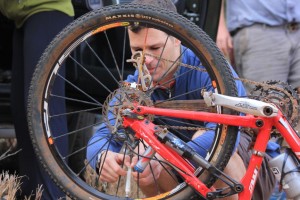 Jon adding stanz prior to the race start – with all the acacia thorns in Kenya we go through quite a bit of it each ride! 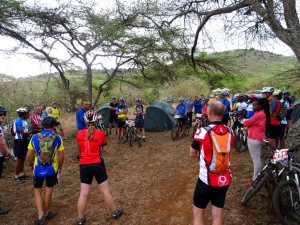 race briefing at the Malepo Hills RVO – our first RVO

The riding takes you through small villages, along amazing single track or on bigger dirt tracks with stunning scenery all around you. The navigating with the GPS is easy, but you have to keep paying attention as it is easy to take the wrong single track (so many goat tracks around!). 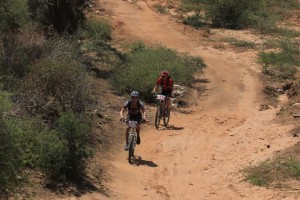 Jon and Jude riding in the Malepo Hills 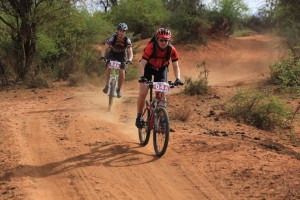 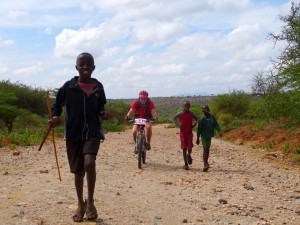 Jude riding with the local kids, there are always some around to wave to or say “fine”, in response to their never ending questions “how are you?” 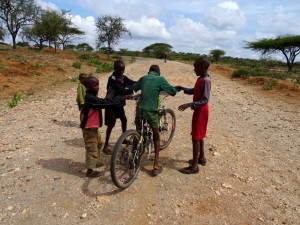 The second one was the RVO Sagana, another fun weekend of riding. We had been to this place before as you can also go rafting here (up to grade 4 about 1.5hr drive from Nairobi, a fun half day), but this time Jude was going alone as Jon was in the US for Richard’s stag weekend. Jude joined Farook and Shafiq, 2 riders we had met before at other races. Again the scenery was amazing, riding through the villages and the beautiful nature still around in some places. There was even a fun little ferry crossing with rowing boats on day 1 and some crazy hills on day 2. 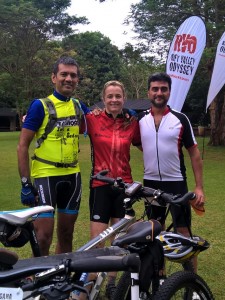 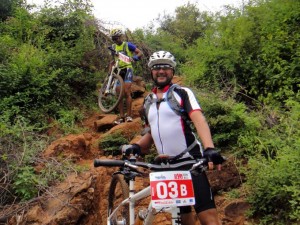 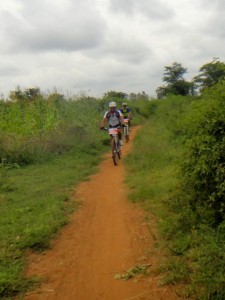 Farook and Shafiq on some more single track 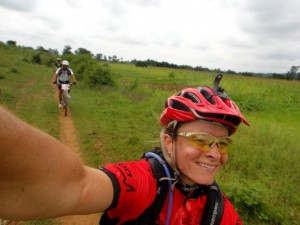 selfie with Farook and Shafiq in the back 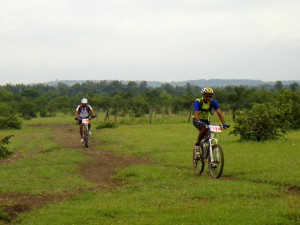 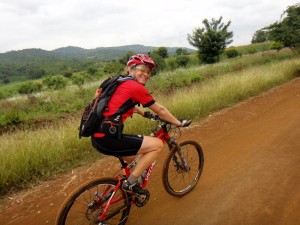 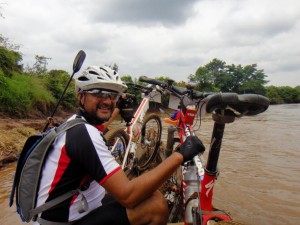 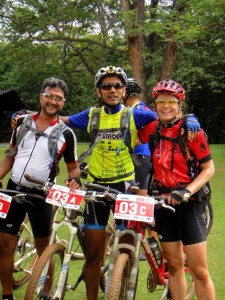 the team at the end of day 1 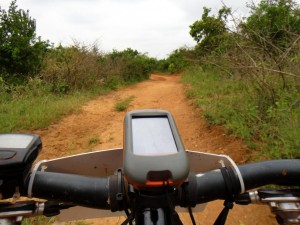 So far we haven’t seen any pea gravel on our rides yet (our riding buddies in Western Australia know what we are talking about here!), but we have encountered lantana (thought we had escaped that after leaving Queensland!) and as an extra challenge here you have to watch out for massive holes in the middle of the tracks as aardvarks don’t seem to consider bikes when digging for insects – they can easily swallow a bicycle wheel!

We have already signed up for the Rift Valley Odyssey in September, but will be doing the 3-day version instead of the 5-day ride. We’ll let you know then how it went!