Before the Arab conquest in 637, which brought Islam to Iran, Zoroastrianism was the main religion. A very old religion dating back to 1500 BC, Zoroastrianism was one of the first to believe in an almighty, invisible god. Ahura Mazda (their god) had asked if they could pray towards the light and so fire temples were created where the flame was kept burning continuously. When the Arabs brought Islam to Iran, many aspects of Zoroastrianism were absorbed into the new religion. Nou Ruz, the Iranian celebration of New Year on the spring equinox, 21 March, is one of them.

Currently only around 25,000 Zoroastrians remain in Iran (there are estimated to be 150,000 worldwide), the majority in Tehran and Yazd. Near Yazd we visited the most important pilgrimage site in Iran for Zoroastrianism at Chak Chak. This means ‘drip drip’ and refers to the spring coming out of the mountainside. Right next to the spring is an ateshkadeh, or fire temple has been built, called Pir-e-Sabz. It was a steep hike up, but the views and the bass reliefs on the brass doors at the entrance of the temple, symbolising their guardian spirit, were worth the walk. A beautiful sunset as we came out of the temple made it even more rewarding. 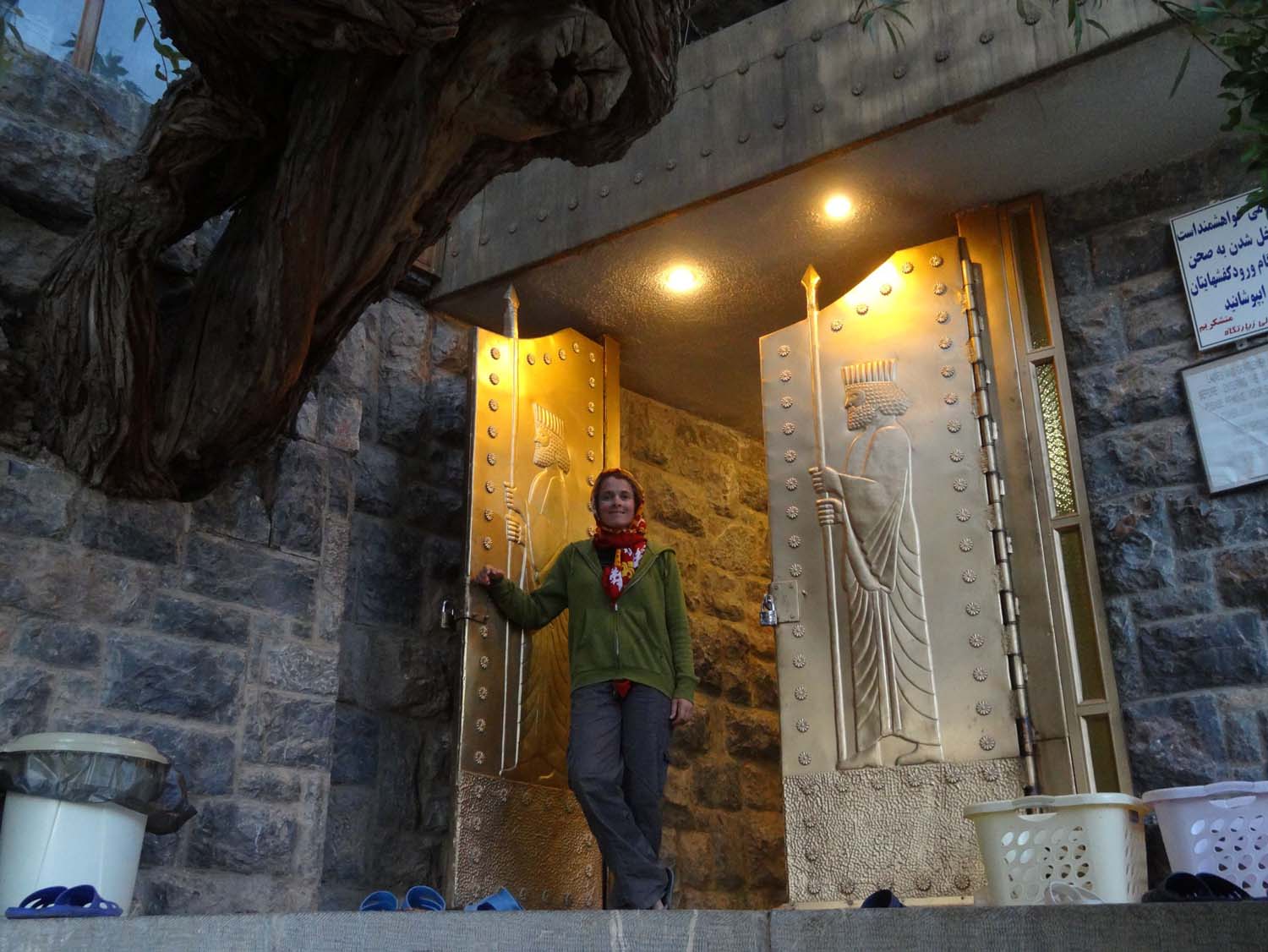 the entrance to the fire temple at Chak Chak 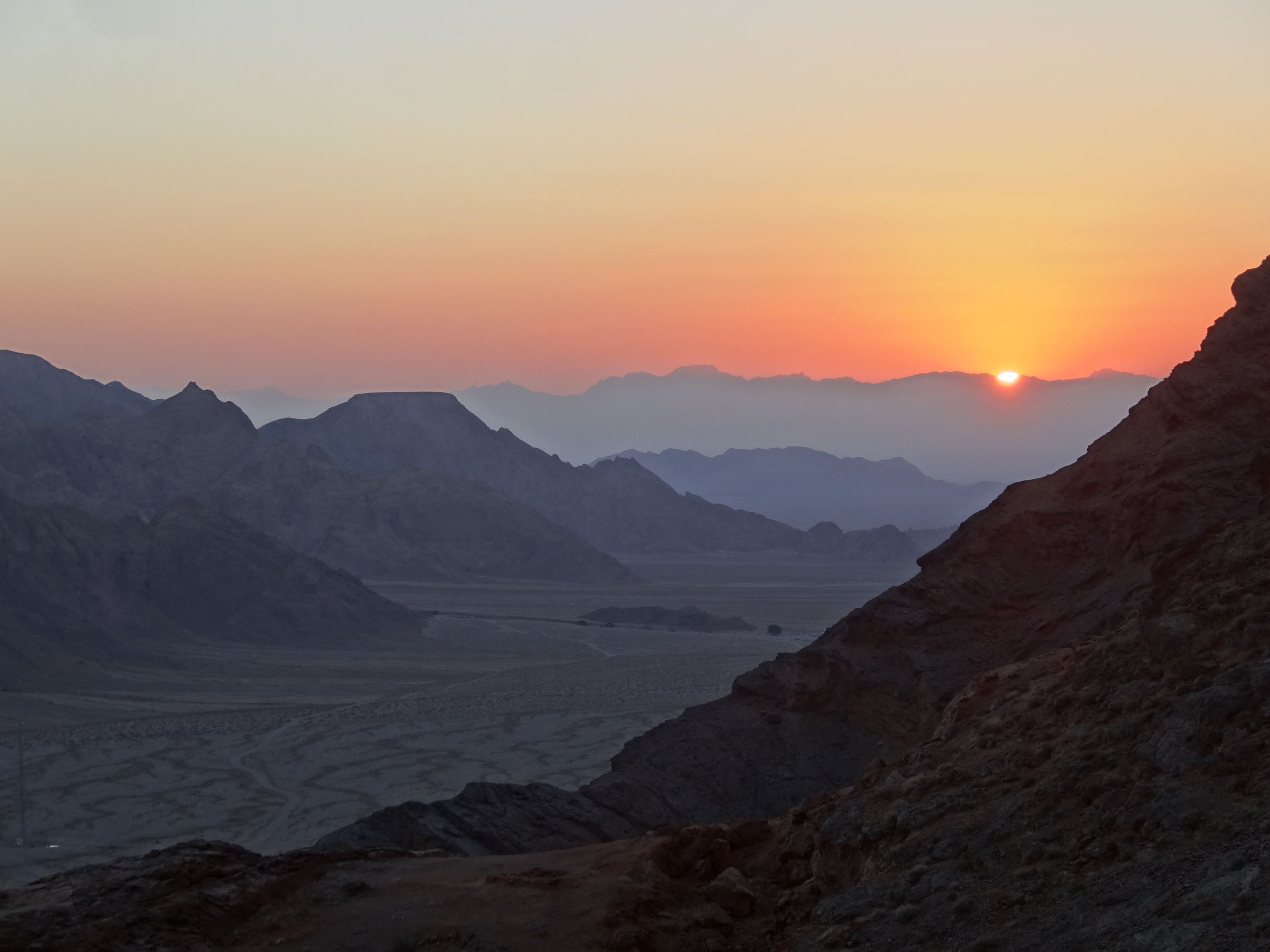 We saw another fire temple in Yazd, where it is said that the flame has been burning continuously since 470 AD, despite being moved on several occasions. They were using wood, and to us it looked to be more like glowing embers, not a flame, but I guess that counts. At Chak Chak they were burning 3 pots of something that looked like yak butter. 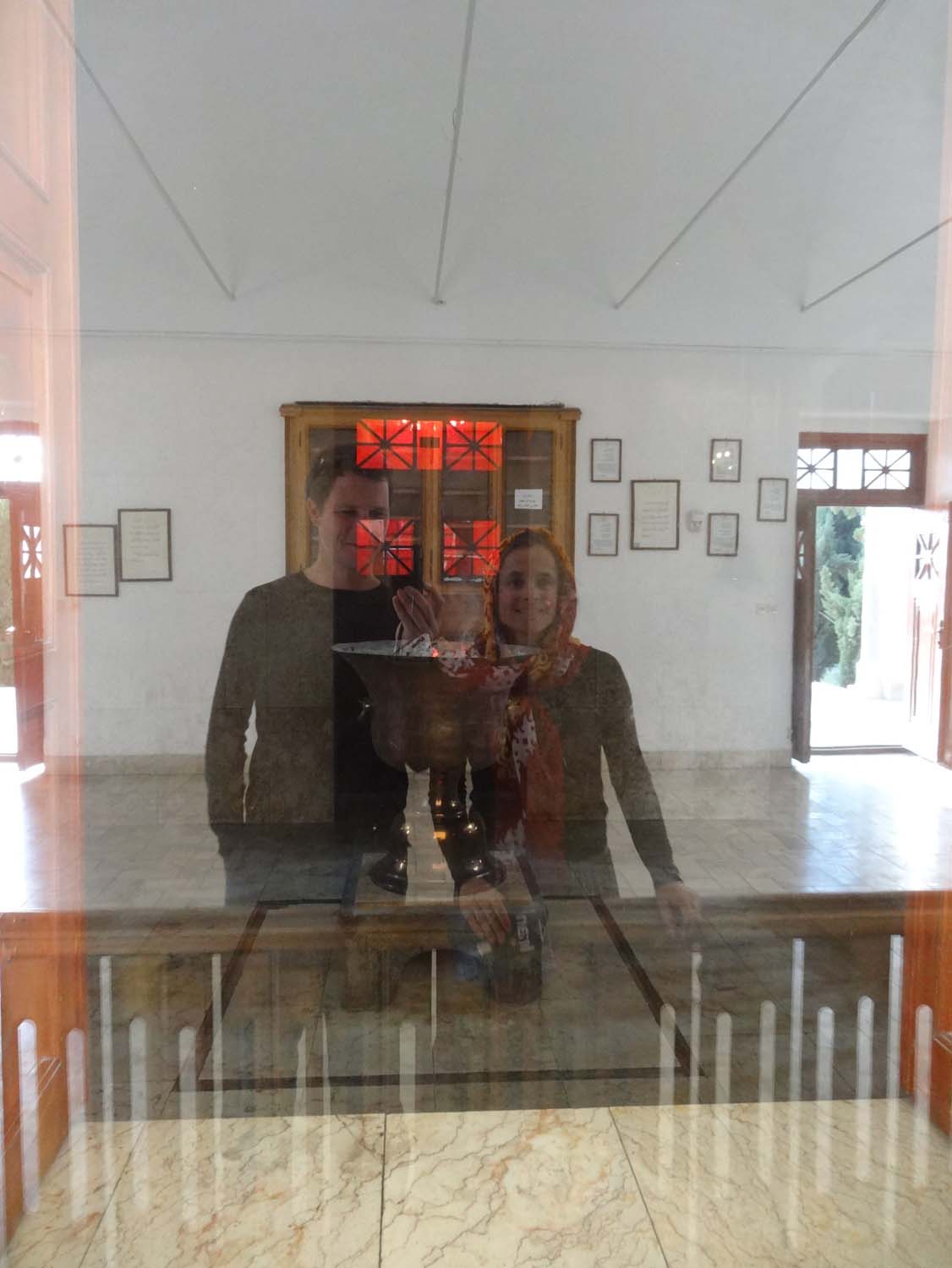 looking at the eternal flame in Yazd, burning continuously for 1600 years

On the outskirts of Yazd are two towers of silence, Dakhmeh-ye Zartoshtiyun. We’d already seen one of these in Uzbekistan, but were keen to have a look these as well. They seemed in better condition and we learned they were in use until the 1960s. The Zoroastrians don’t want to bury their dead (as it pollutes the earth) or burn them (as it pollutes the sky). Instead, the dead were brought to the towers of silence. 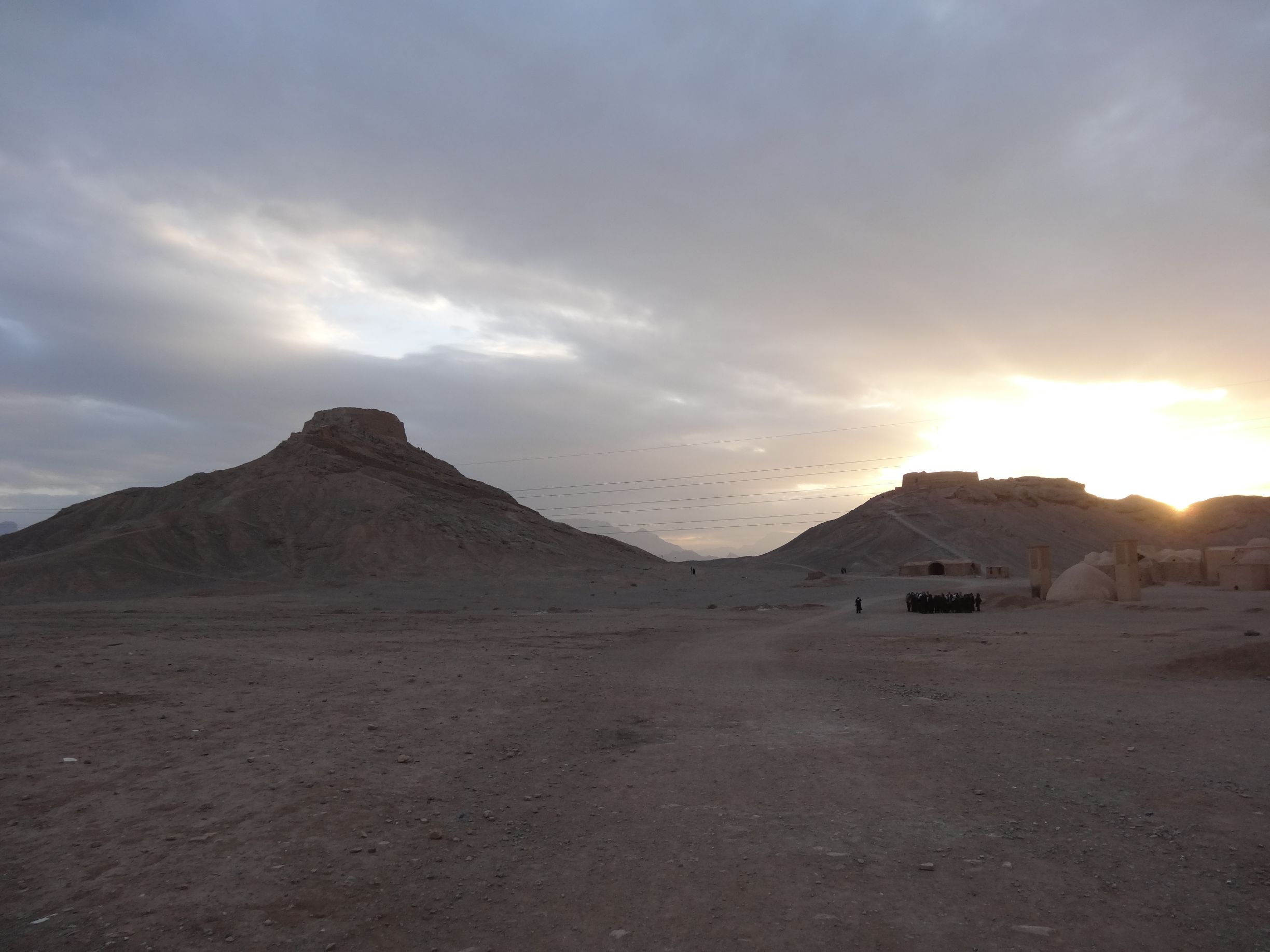 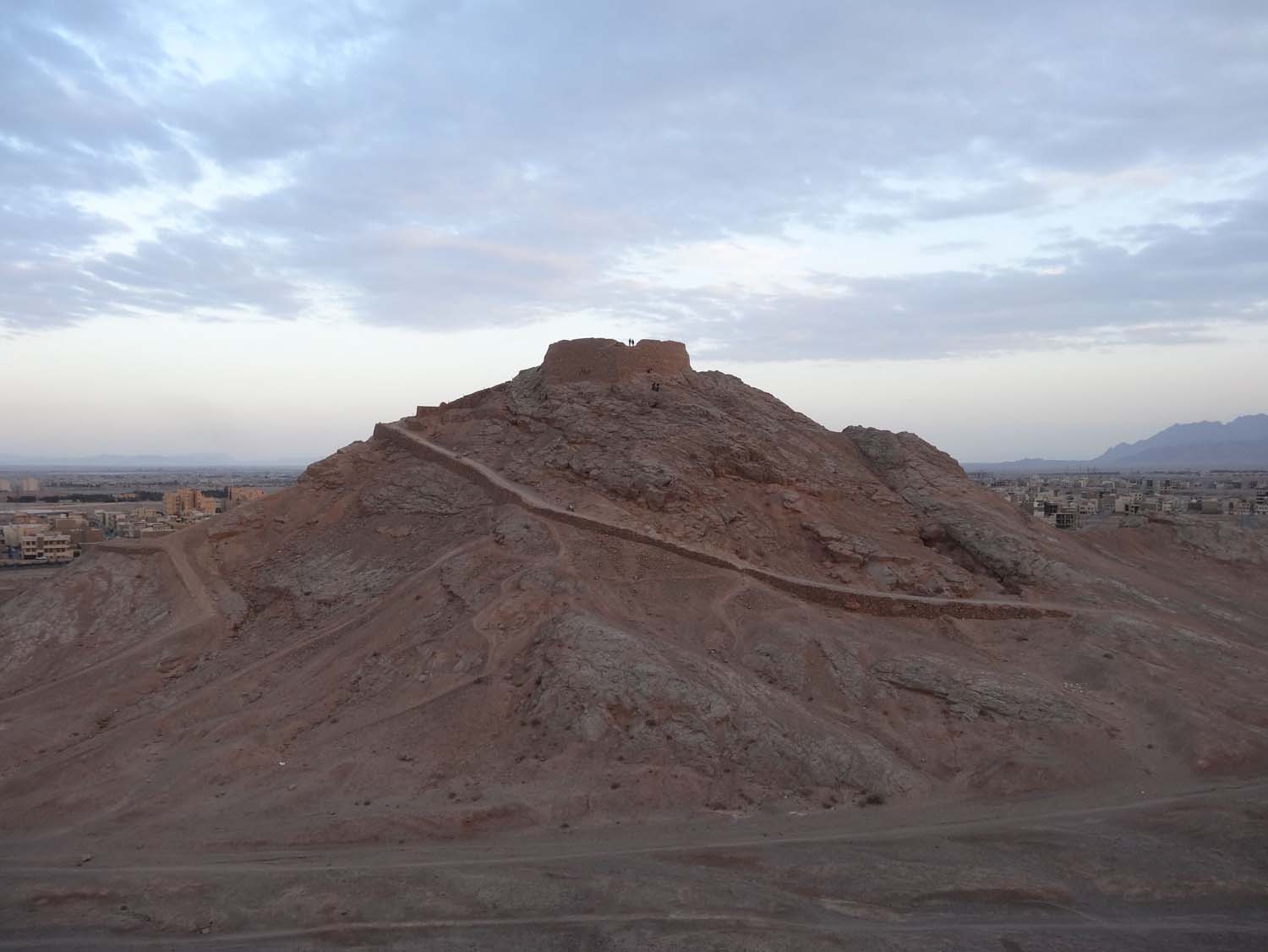 one of the 2 towers of silence near Yazd

Myth says people were placed in a seated position and only a priest was allowed to be inside the tower. He would watch if the vultures picked out the right or left eye first. Your soul would have no problem reaching heaven if the left eye was selected first, but they knew you’d been naughty if it was the right one. Once bones were picked clean, they would dispose of them in the centre well, together with some alkali that would help to dissolve the bones. 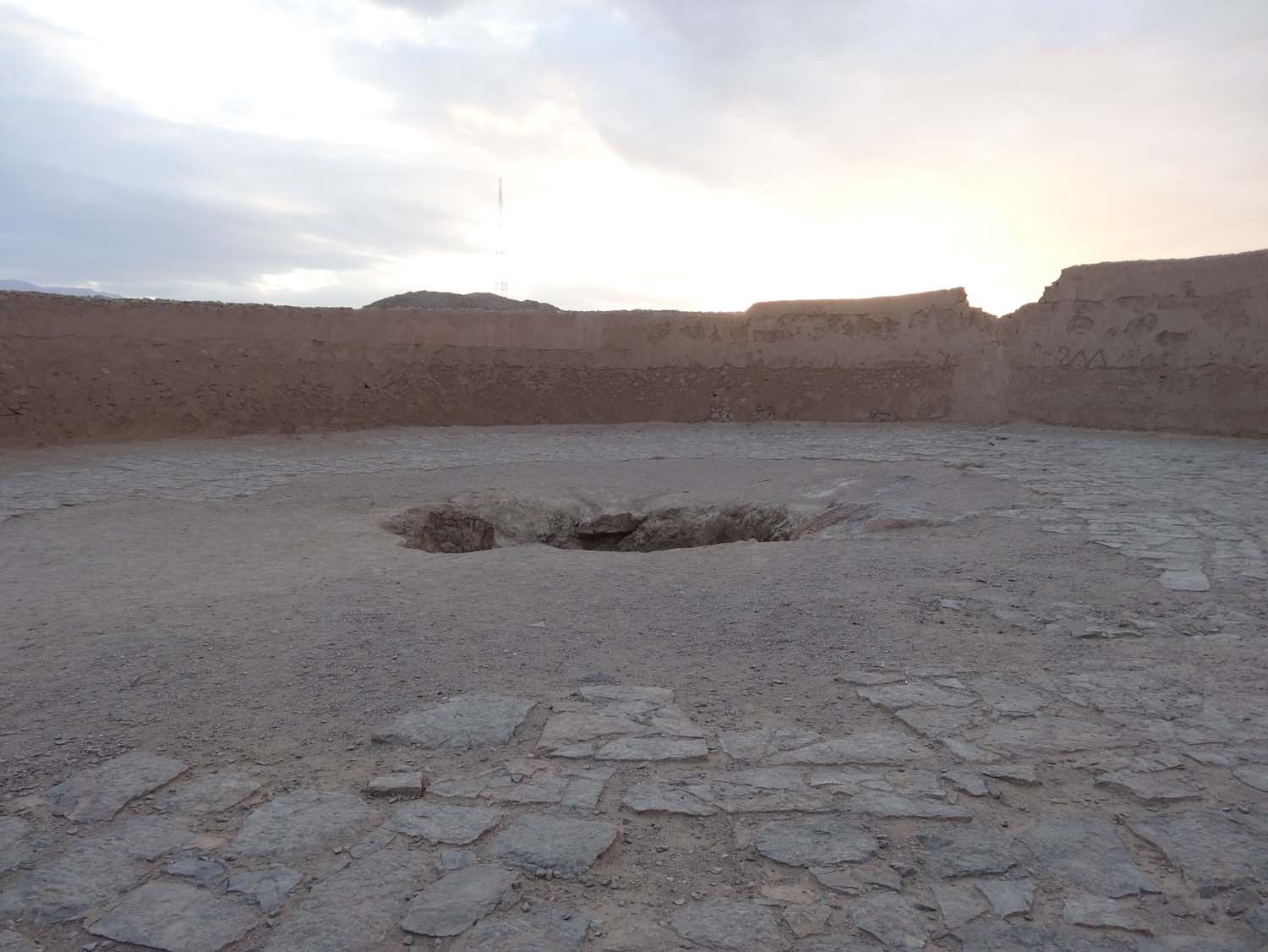 they used to deposit the clean bones in this pit in the centre of the tower, high walls prevented anyone from looking in

By the 1960s, a decline in the number of vultures and an encroaching town meant the smell of dead people was lingering too long and Zoroastrian bodies were no longer welcome. Every part of town used to have its own building to prepare the death, but these buildings are now quickly becoming unrecognisable ruins. And that’s only 50 years after being deserted.

Zoroastrians now no longer have the option to feed their dead to the vultures. Instead they line the graves of their dead with cement in the nearby cemetery. It is a little sad they have lost their ancient tradition, I quite like the idea of feeding the birds and not cluttering up space in a cemetery after life…

Our last Zoroastrianism stop in Iran was Takht-e Soleyman, a huge fortress built on an extinct volcano, which was the spiritual centre of Zoroastrianism in Iran before the arrival of the Arabs. It is a stunning location. The huge fortress contained council halls, several temples, a hammam and living quarters. At the centre of the compound is a bright blue crater lake, and next to this was the fire temple, the eternal flame was fueled by volcanic gasses channeled to it through ceramic pipes (all this in the 3rd century AD). 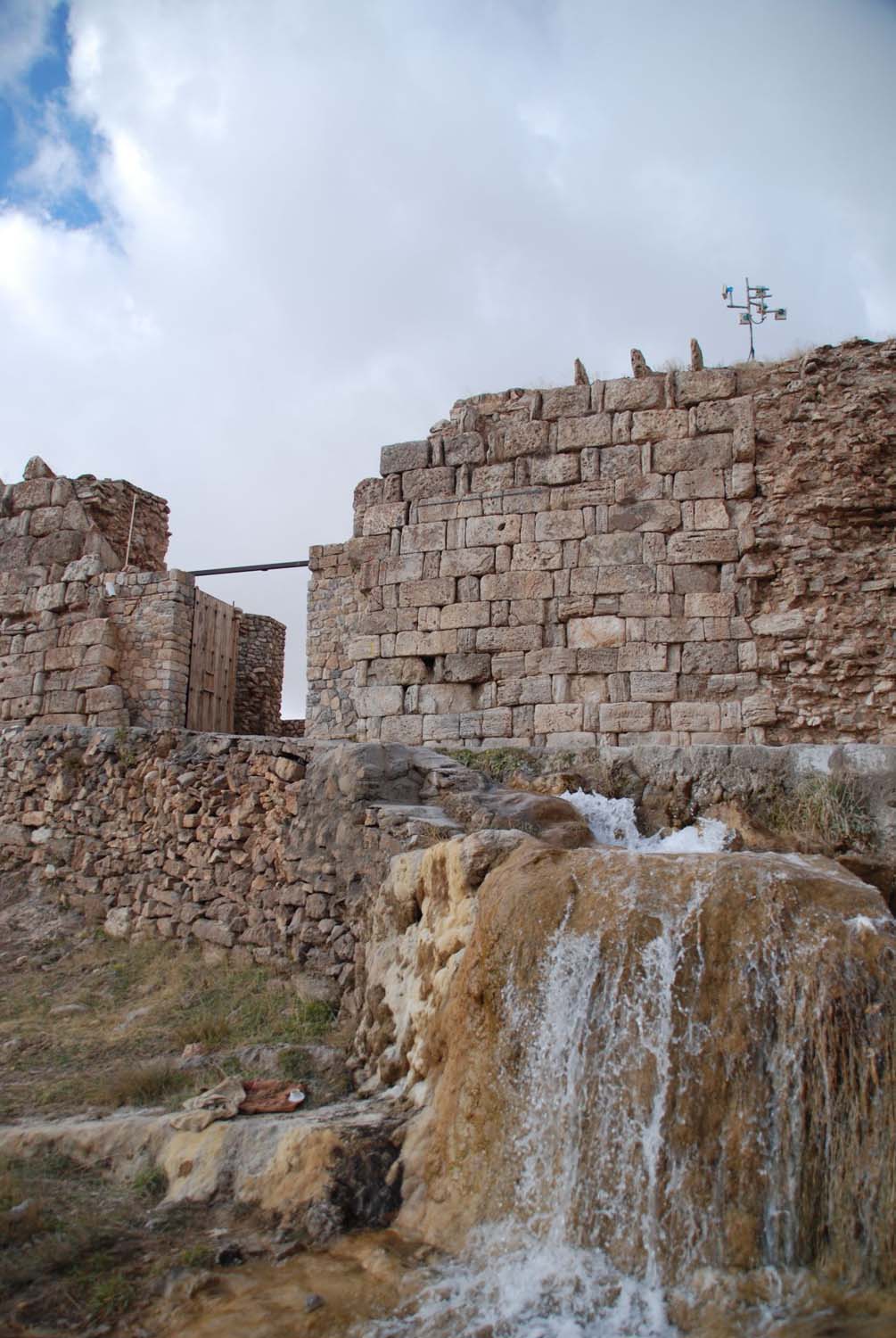 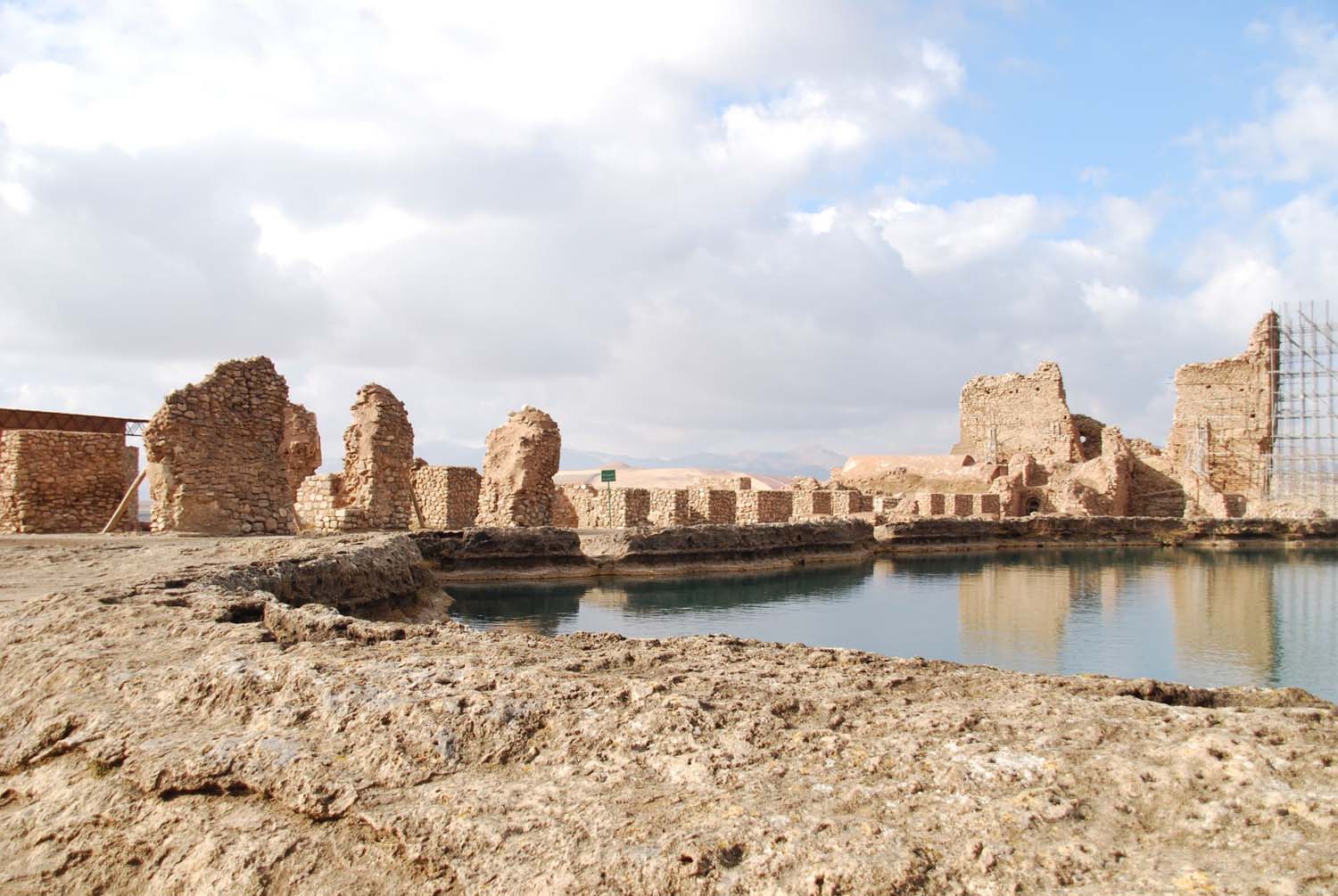 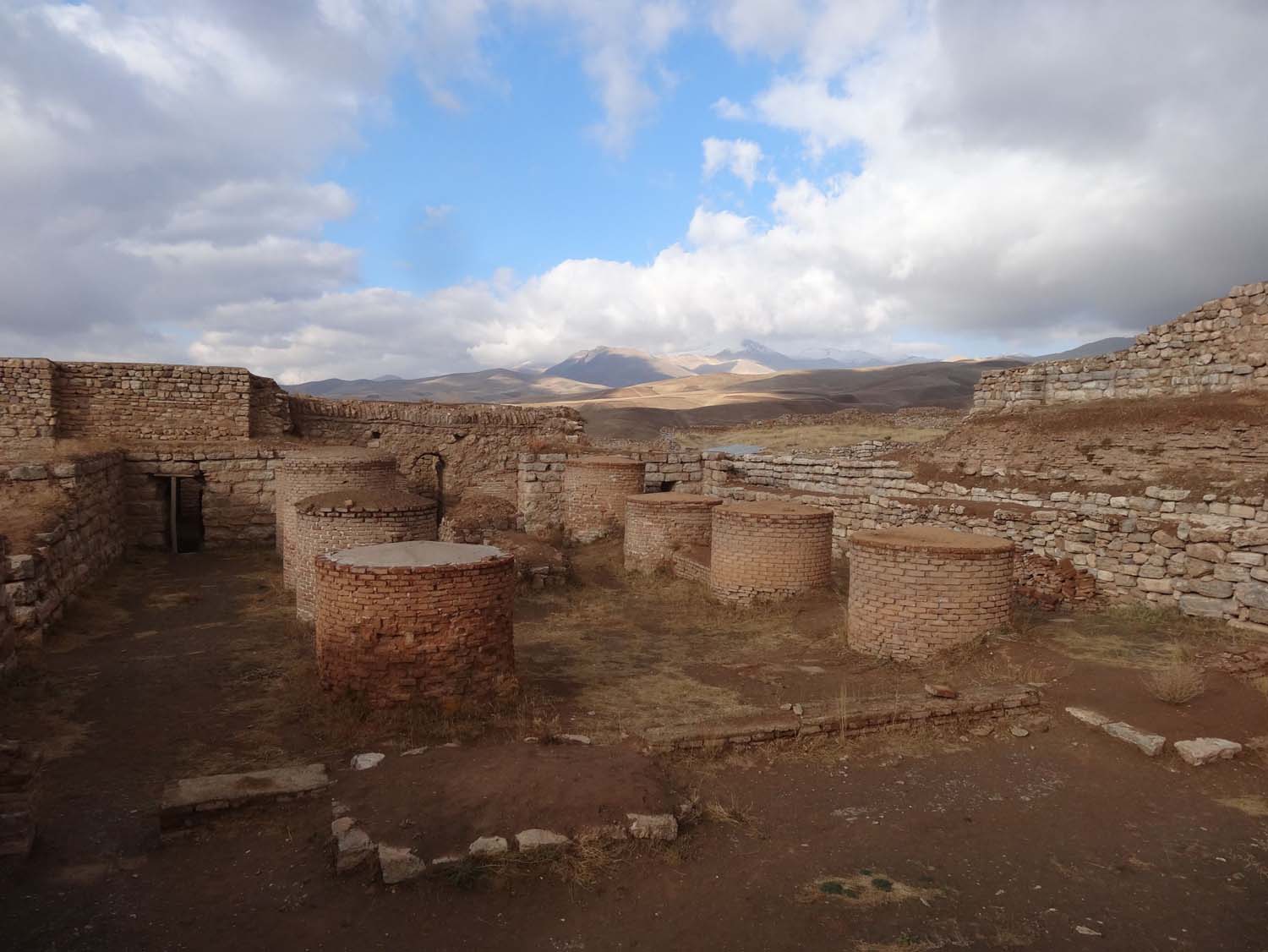 The name Takht-e Soleyman means Throne of Solomon, the biblical prophet and has nothing to do with Zoroastrianism. The Persian guards made up a story which spared the site from total destruction by the invading Arabs, such was their respect for biblical prophets. Later, the Mongols even built their summer palace inside the fortress during the time of their invasion of Iran.

Next door was a primitive, but horrible Zoroastrianism prison. Located inside the hollow remains of a sister volcano, where sulphurous fumes were still oozing out, the prison was at the bottom. Prisoners were probably thrown into the massive crater, about 85m deep and 65m wide and wouldn’t have lived long in the toxic environment without water, if they survived the fall. As we didn’t have to go to prison and we were there at sunset, we enjoyed the beautiful views of Takht-e Soleyman and the surrounding hills from the rim of the crater. 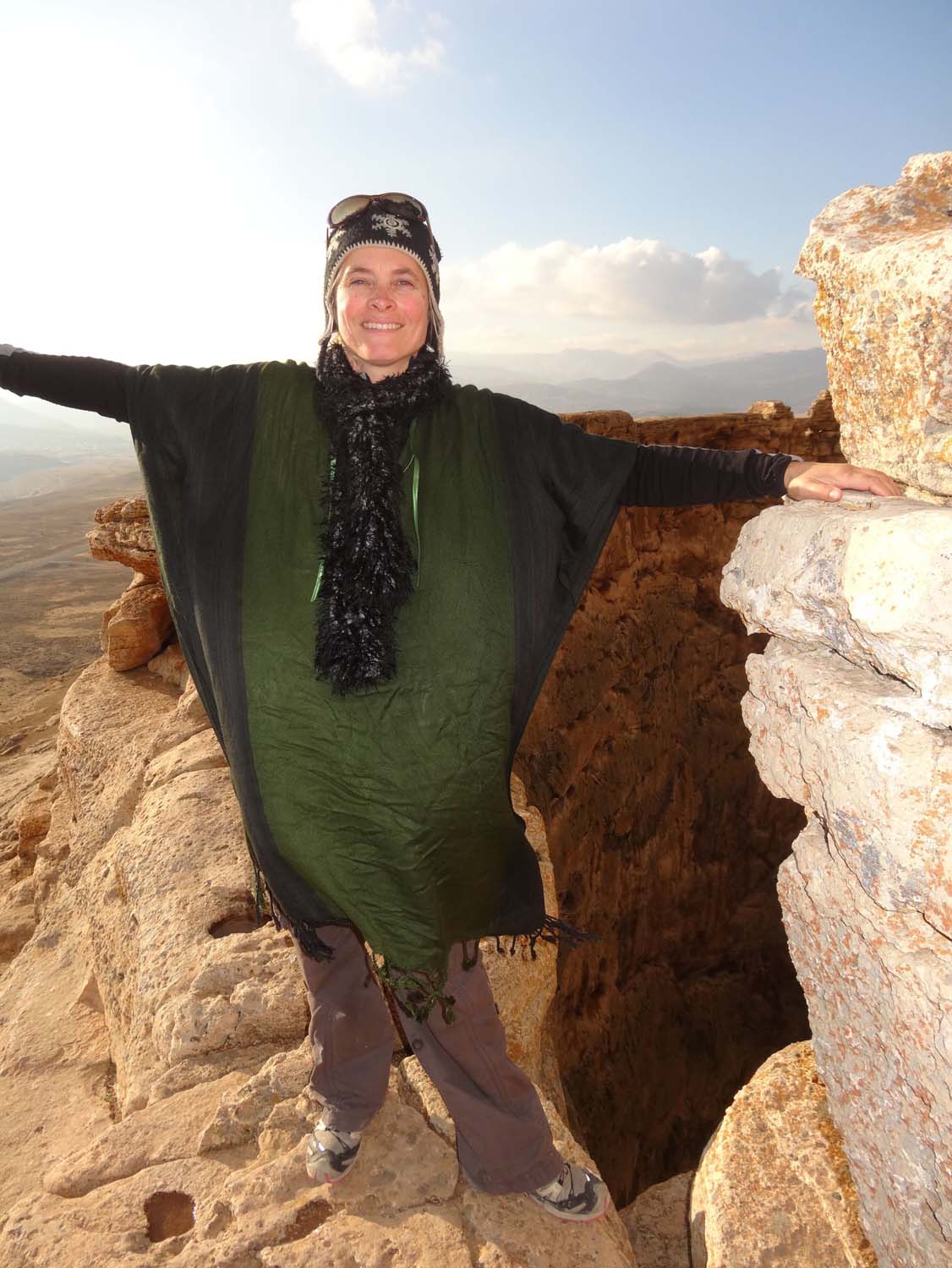 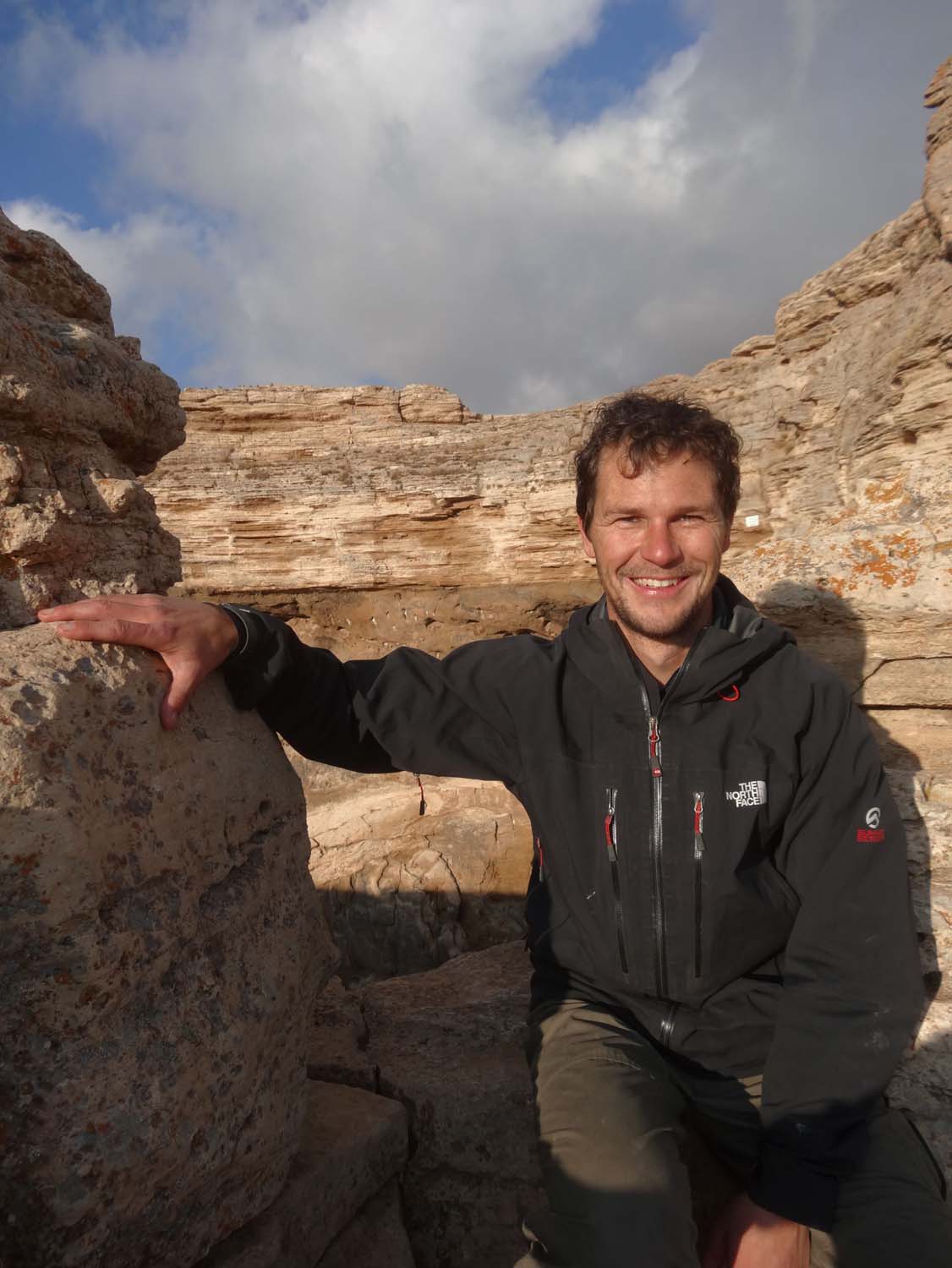 at the top of Zendan-e-Soleyman, the prison 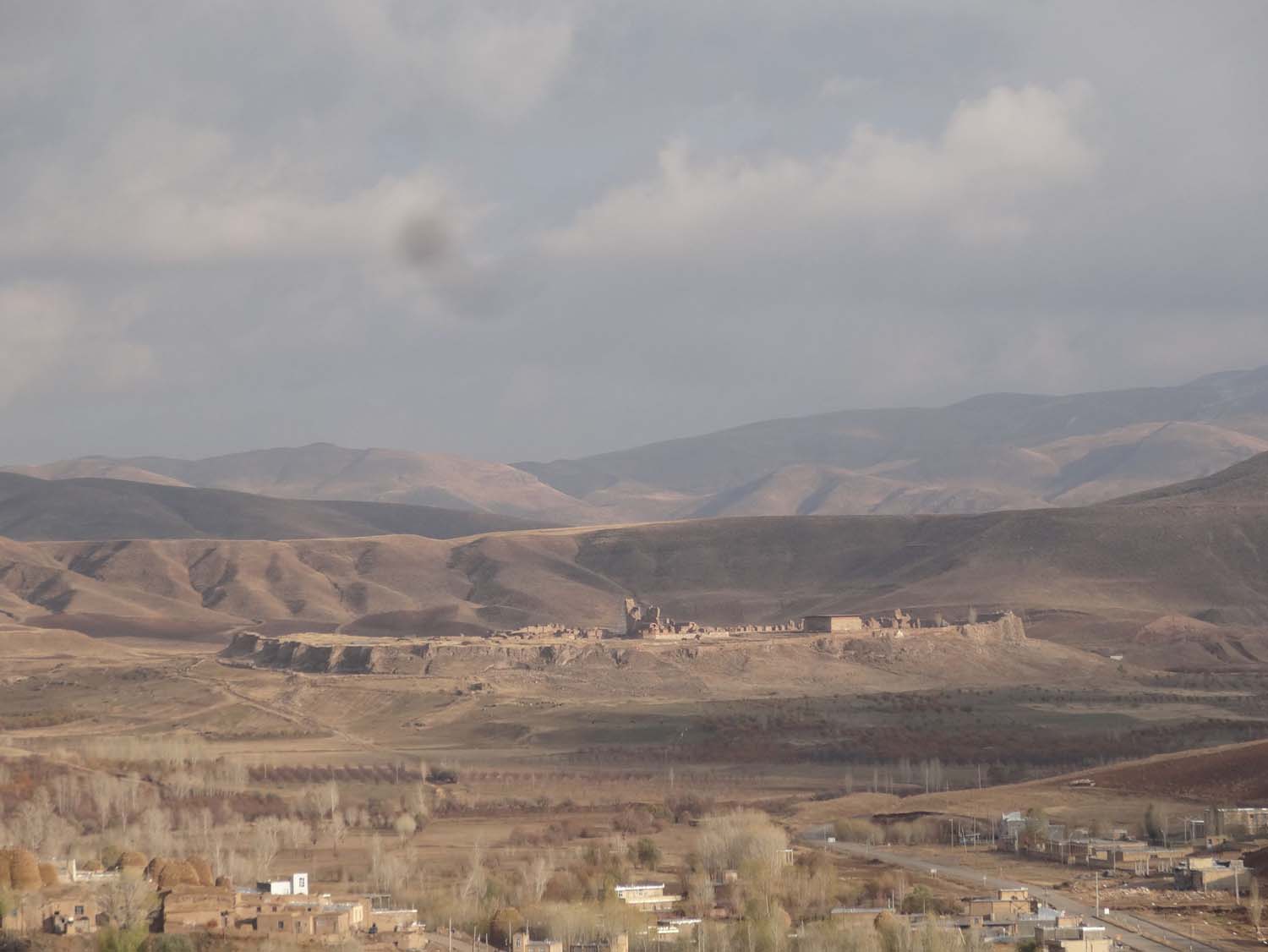 view of Takht-e-Soleyman from the prison volcano

A final, little known fact about Zoroastrianism: the Three Wise Men are believed to be Zoroastrians.