First impressions of Mkomazi NP were good. We drove in at the afternoon game drive time and spotted many birds straight away. As always, the light during this time of day changes and becomes incredibly beautiful. 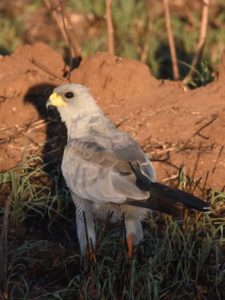 a beautiful eastern pale chanting goshawk in he early evening light. We thought he must be eating something as he was on the ground, but we couldn’t really see what. 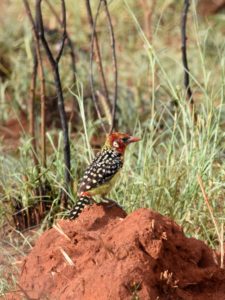 It was only an hour’s (slow) drive from the gate to Babu’s camp, the only lodge in the park. It’s basic and only has a few tents, but the staff is friendly and helpful and the food pretty good. One of the best things about Babu’s camp is the location, nestled amongst ginormous baobab trees. Our tent was parked right beneath one, which happened to be full of leaves and blossoming, a stunning sight. It even came with its own resident African orange-bellied parrots with a nest in its trunk. 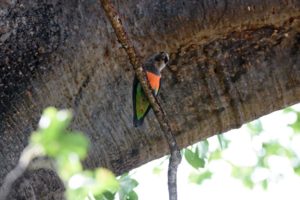 a curious orange-bellied parrot in the baobab tree next to our tent, they had a nest in one of the small hollows in its massive trunk

To our surprise there was nobody else staying at the camp. We know Mkomazi doesn’t get the visitor numbers like the Serengeti, but with xmas, we assumed there would be at least some other people visiting…

We spent our time like we always do on safari, mostly in the vehicle driving around, hoping to get lucky with the animals we see. Mkomazi NP is right on the border with Kenya and forms one of the largest protected ecosystems in the world with the Tsavo West and East national parks in Kenya. Due to its northern location we saw gerenuks, vulturine guineafowl, and fringe-eared oryx. These are all animals we were used to seeing in Kenya, but in Tanzania they can only be seen in very few places. 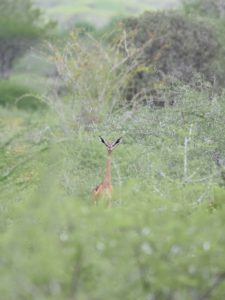 who is that peaking up through the bushes? it’s a gerenuk, long time no see…

Mkomazi NP is around 3,200 square kilometres and was turned into a national park in 2006. It has two fenced sanctuaries which we were unfortunately not able to visit, one for breeding wild dogs and one for black rhinos. From the park you can see Mt Kilimanjaro and to the south you can see the Pare and Usambara Mountains. It is quite a dry area with rocky outcrops, open savannah, woodlands, and huge baobab trees. 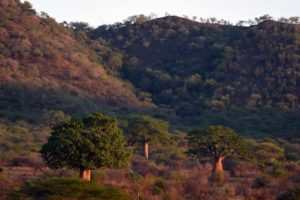 We only saw a small area of the park, mostly the western section with one drive further out towards the centre. On the way back we had a flat tyre and were lucky to have some rocks nearby to help jack up the car, as the small jack that was in the car was not large enough to get the wheel off the ground. It was another one of the things we noticed from the safari company we used that was pretty poor. 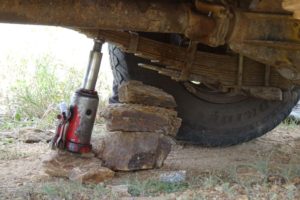 a bigger jack might have been better…. we were lucky there were some decent rocks around…

But luckily the animal sightings made up for it. We spotted a family of bush pigs running across the track and a beautiful spotted eagle-owl in the woods on an early morning drive. We also watched a small family of dwarf mongooses play around in a dead tree for a while. One of them had the biggest grin on his tiny face, so cute. 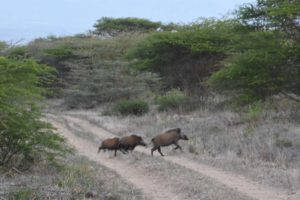 a family of bush pigs on the run, they are nocturnal animals so you don’t see them very often during the day. We were very lucky to come across them. 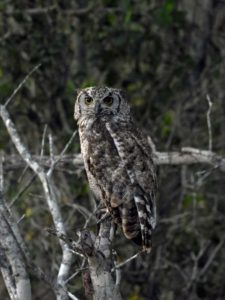 a first for us, a beautiful spotted eagle-owl in the early morning 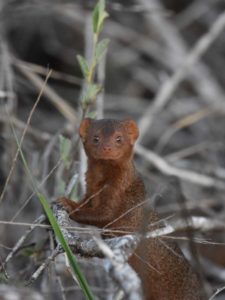 this cute dwarf mongoose has the most amazing smile! 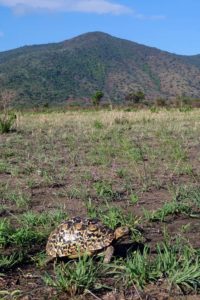 life in the slow lane, a small-ish leopard tortoise cruises past

As there was no moon early in the evenings we spent some time trying to take night sky photos, some with our tent and the huge baobab included. It’s tricky, but worth it and we (well, Jon really) got some nice shots. 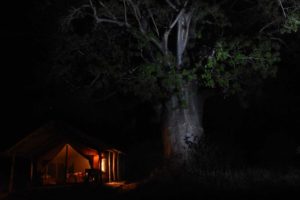 our home for the xmas break in Mkomazi NP, under a huge, flowering baobab tree

For xmas the staff had made us a cake and after dinner they all came in, singing and dancing with the cake. We had to cut it, but then we gave it back to them so we could all share it. It was a lovely way to celebrate xmas, albeit a tiny bit lonely. 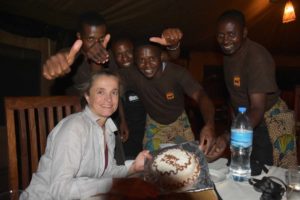 Jude and the team, proud of their lovely xmas cake