We entered the Islamic Republic of Iran from Ashgabat in Turkmenistan which meant our first major stop would be Mashhad. Mashhad is Iran’s holiest city as the 8th Imam (Imam Reza) is buried here and millions of Iranians make the pilgrimage every year to see his Holy Shrine. Together with Qom (Iran’s second holiest city) this is probably the most conservative town and most women wear the chador, although even here we saw some locals with a dash of make-up, a colourful headscarf or choosing not to wear the black tent (chador means tent in Farsi).

Inside the sprawling Holy Shrine however, it is compulsory to wear the chador, so Jude could experience on her first day in Iran how hard it is to keep the chador on and around her body. If you want to try this yourself, grab a sheet of your bed and place the middle of it on your forehead. The other end (of the middle of the sheet) should be hanging roughly around your ankles. Then, use your hands to grab each end and wrap it around you. That’s it, easy right? 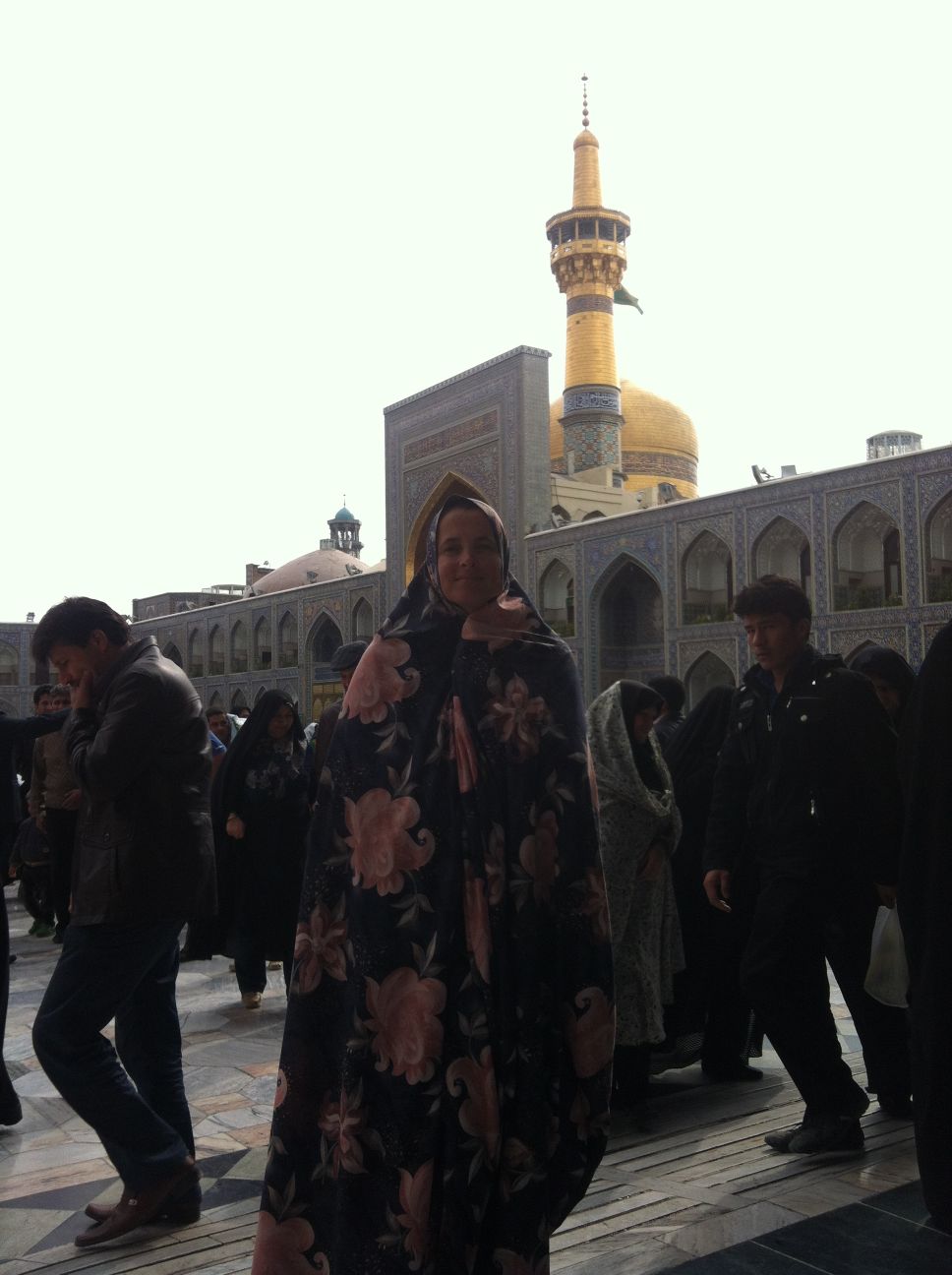 Jude with chador in the holiest shrine in Iran 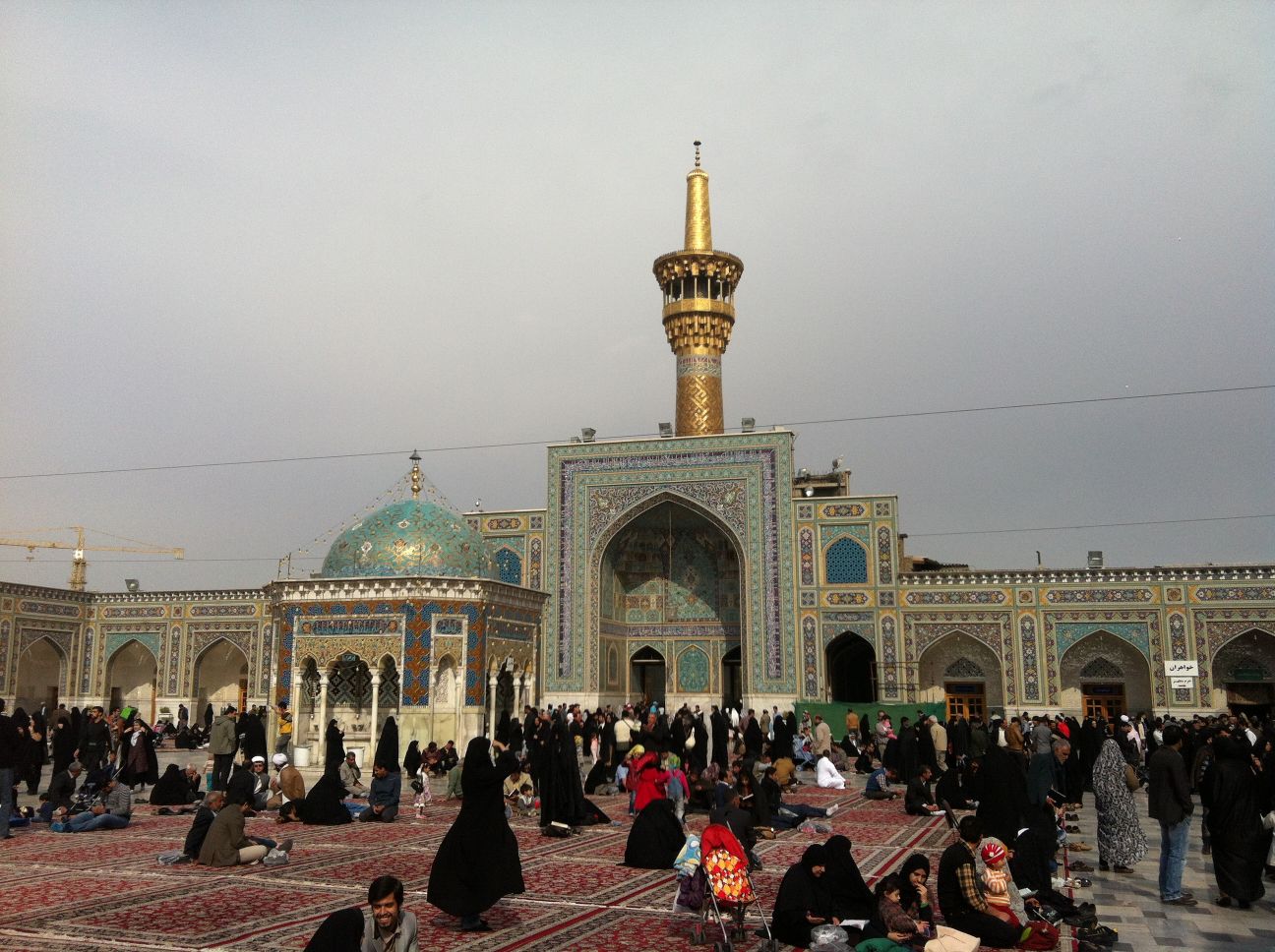 Now walk around for 10 minutes and see what you think. It’s harder than keeping a headscarf on your head as, due to the weight of the sheet, it keeps sliding off backwards. And if you don’t keep the centre on your forehead you will soon step on it as one side will drop. The other problem is that, because it is literally just a sheet, there are no buttons to keep it closed, nor does it have any zips or hooks (why not I wonder?). The women of Iran have become masters in using hands and teeth to keep the thing wrapped around them, but Jude was struggling.

Feeling a lot lighter without chador, we continued our journey south. Iran is another huge country but instead of going straight east to west, we had decided to make a detour south to see more of its amazing sights and stretch-out our year-long summer just a little longer. 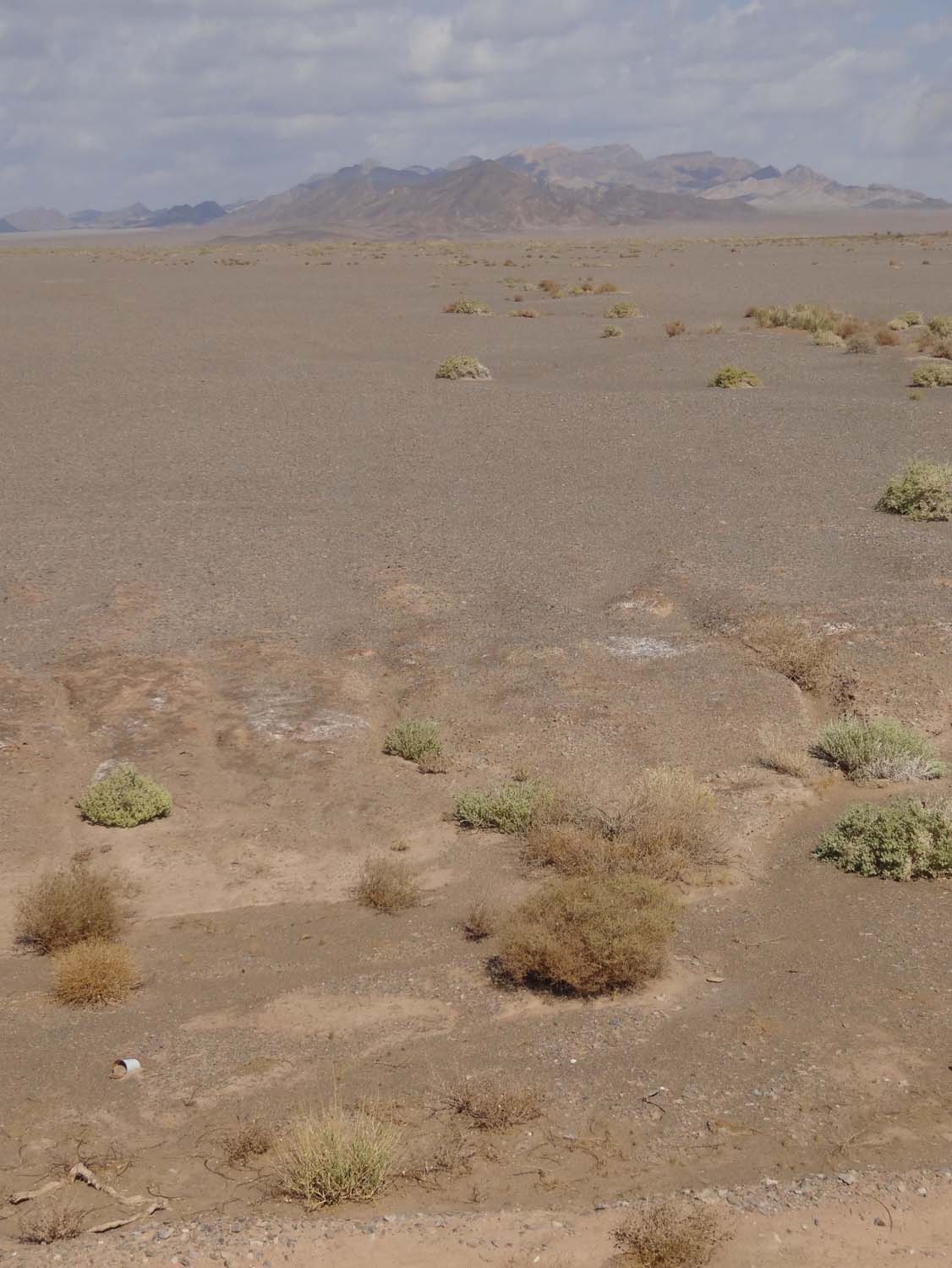 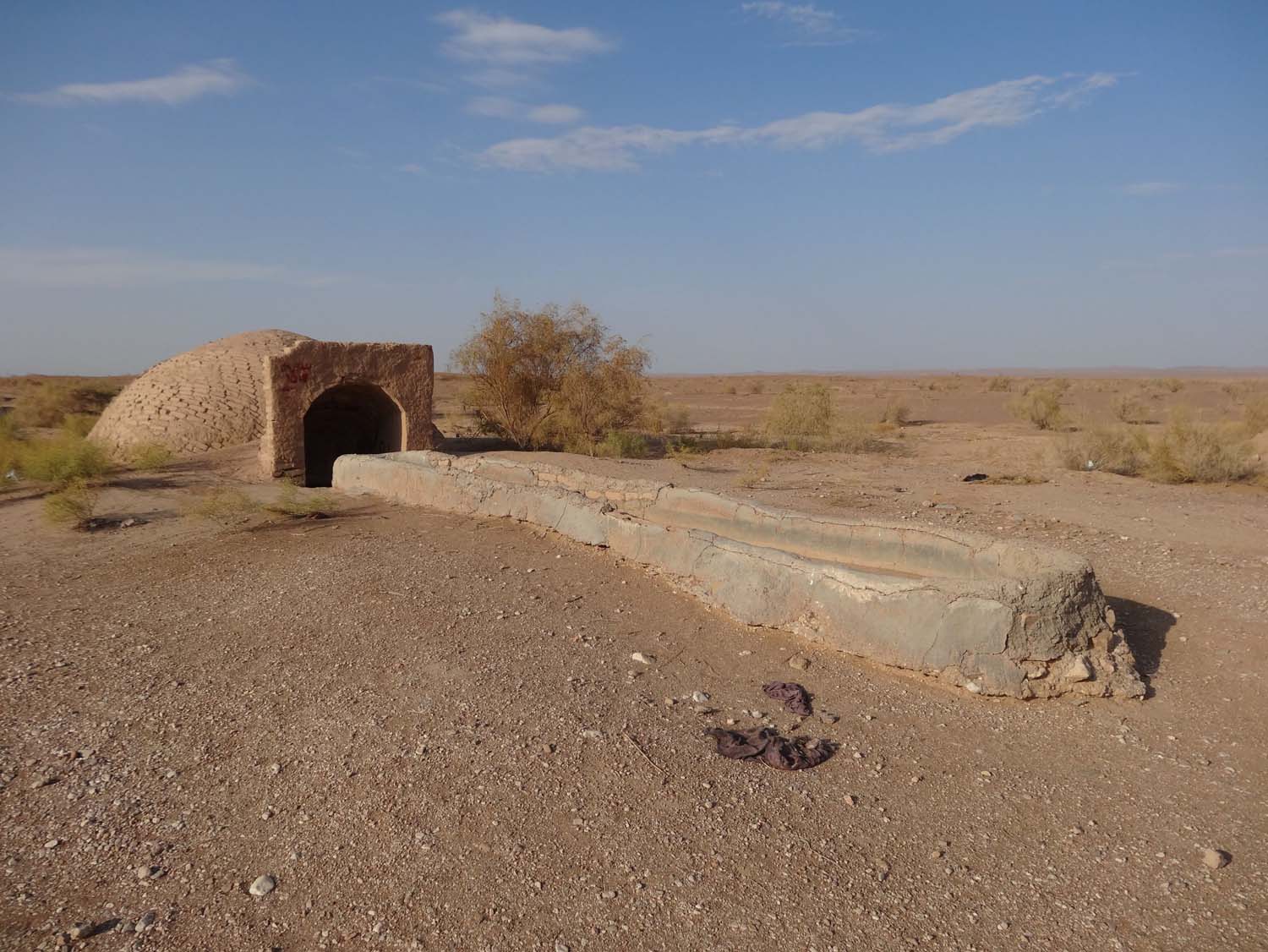 wells in the desert, often linked to the qanats

We love desert camping and in Iran you can easily find yourself a nice campsite somewhere away from the road. But only if you stop before it gets dark. After dark it’s impossible to see if there’s a military post nearby or something else that requires us to keep a distance. Unfortunately for us we hadn’t fully adjusted yet to loosing another 1.5hr after crossing the border and a few times we had to content ourselves with a shitty campsite just off the road because darkness had fallen before we were ready for it.

But when we finally did stop on time and found a good site, we were far away from civilisation and that’s when we heard them. Wolves. Amazing, if a little intimidating. We never saw them, but we heard them in different locations, hopefully this means Iran still has a healthy population. And with not much growing in these desert areas they can hopefully remain there for many years to come. 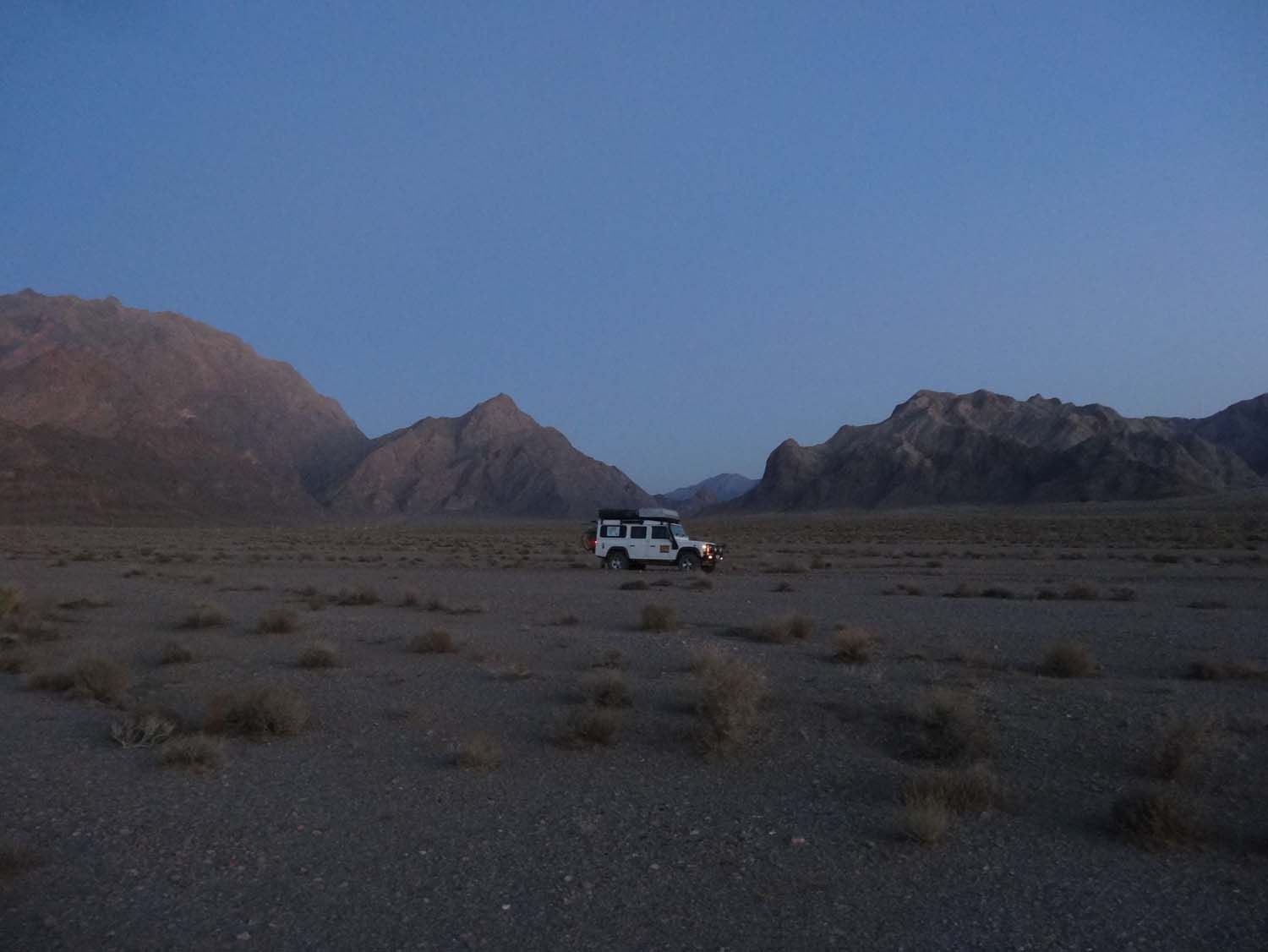 Lara surrounded by wolves. Whilst we didn’t see them, we could hear them all night

Along with the wolves, humans have managed to survive in the harsh desert here for over 2000 years. And to this day qanat (canal) builders earn a good wage designing, digging and maintaining the ancient underground watering canals. You see the evidence of these qanats everywhere, in the middle of the desert you can see piles of sand in neat rows, small canals run through the centre of desert villages and in cities the canals run right through the basement of the historic houses where they were used for washing and even seeking shelter from the heat outside. It is an incredible network, still in use today. 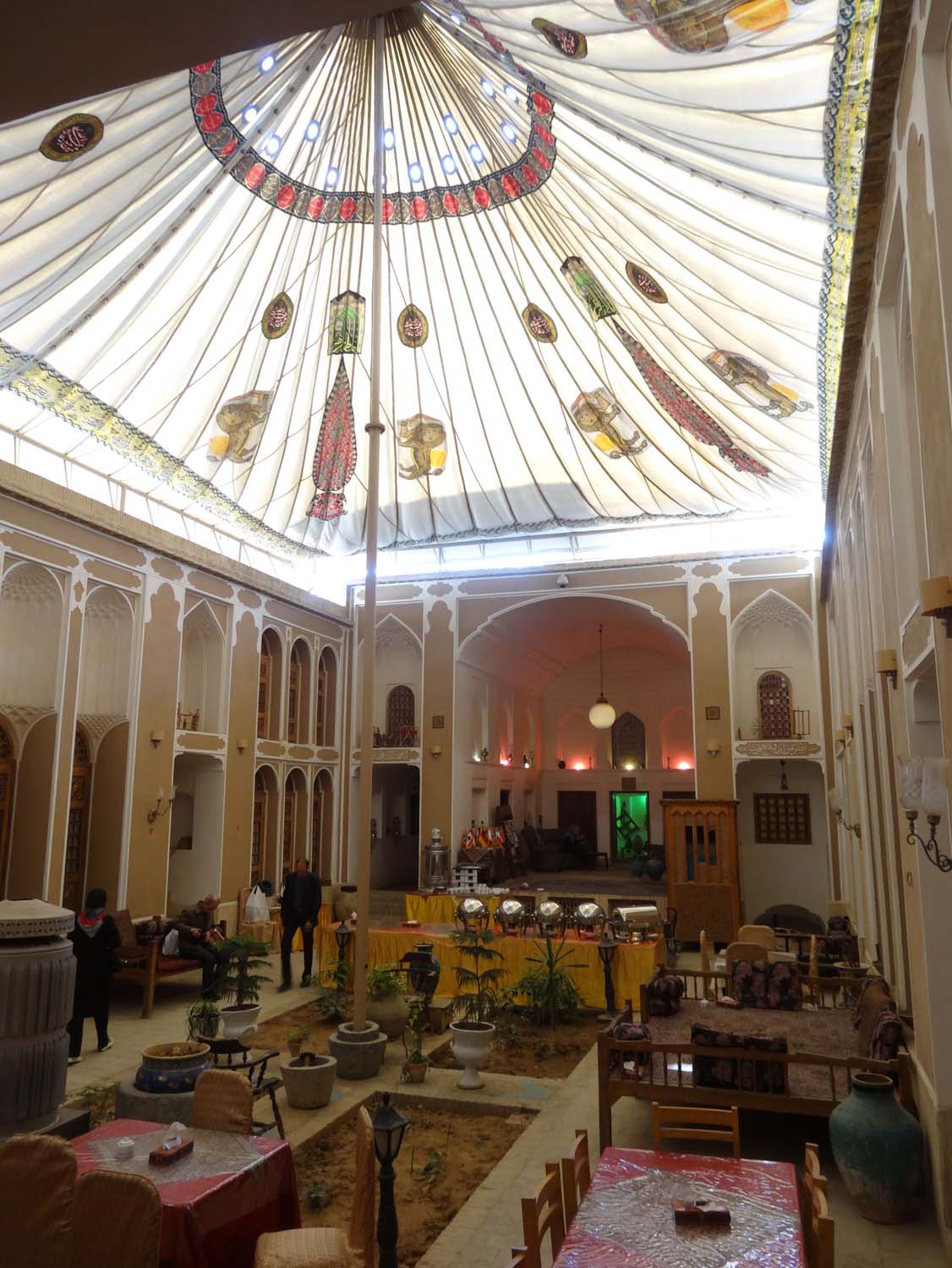 a traditional house, now a restaurant and hotel 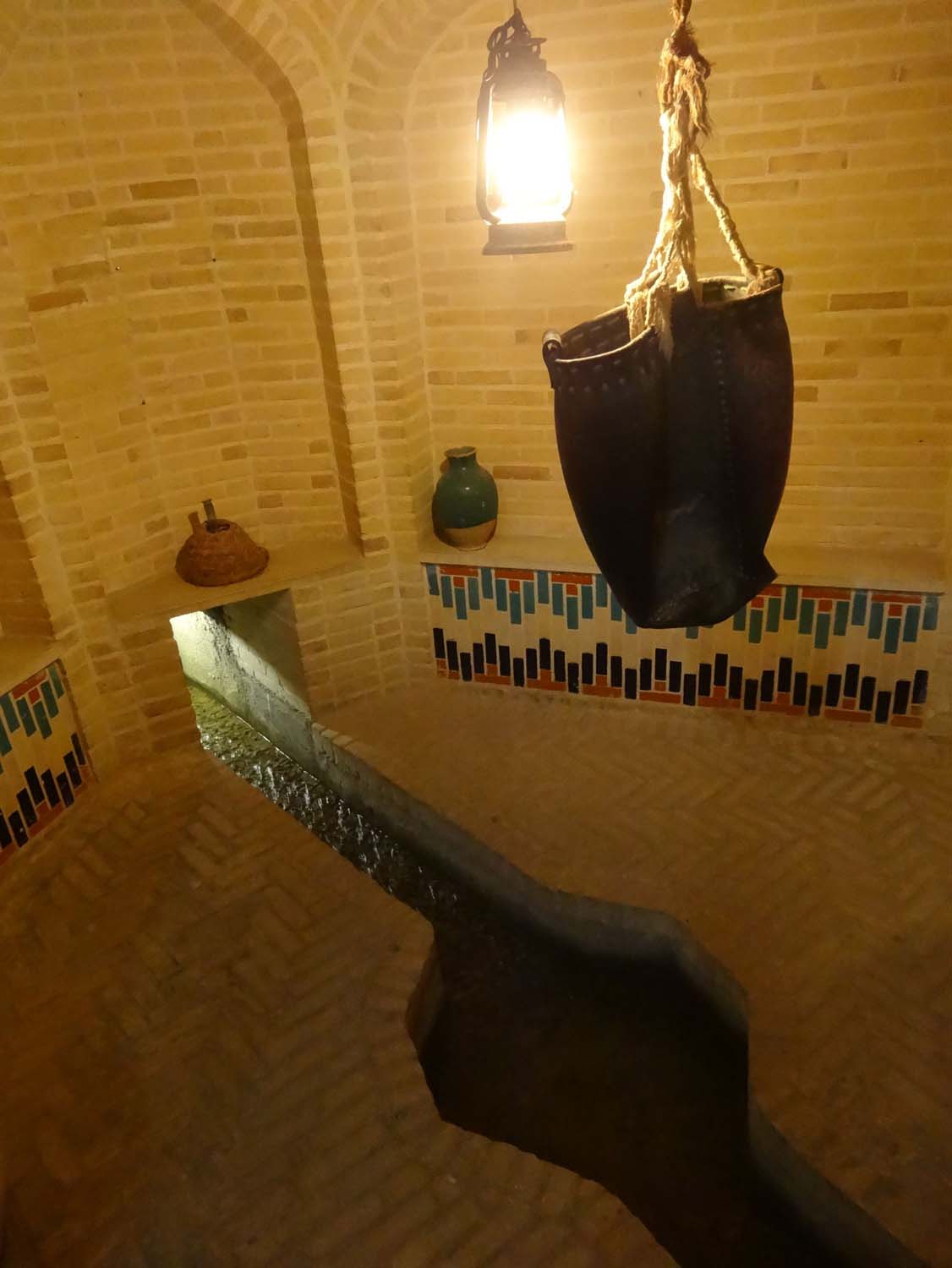 qanats supplied water directly to the homes of the wealthy, the poor would go to the central water supply

Living in extreme conditions before electricity the Persians also developed windtowers called badgirs. They are designed to catch the slightest breath of wind and funnel it into the house below. Some are very simple and low, catching only the wind from the prevailing direction. The tallest towers, up to 34m, with 4, 6 or even 8 sides, catch the wind from every direction and some even direct the cool air over a pool of water to improve the air conditioning effect. We stood beneath one and the coolness coming down and in the rooms adjacent was impressive. Yazd is famous for these badgirs which are scattered all over town, but unlike the qanats, this ancient design is slowly disappearing as air-conditioning units now take the place of the much healthier and more economical badgirs. 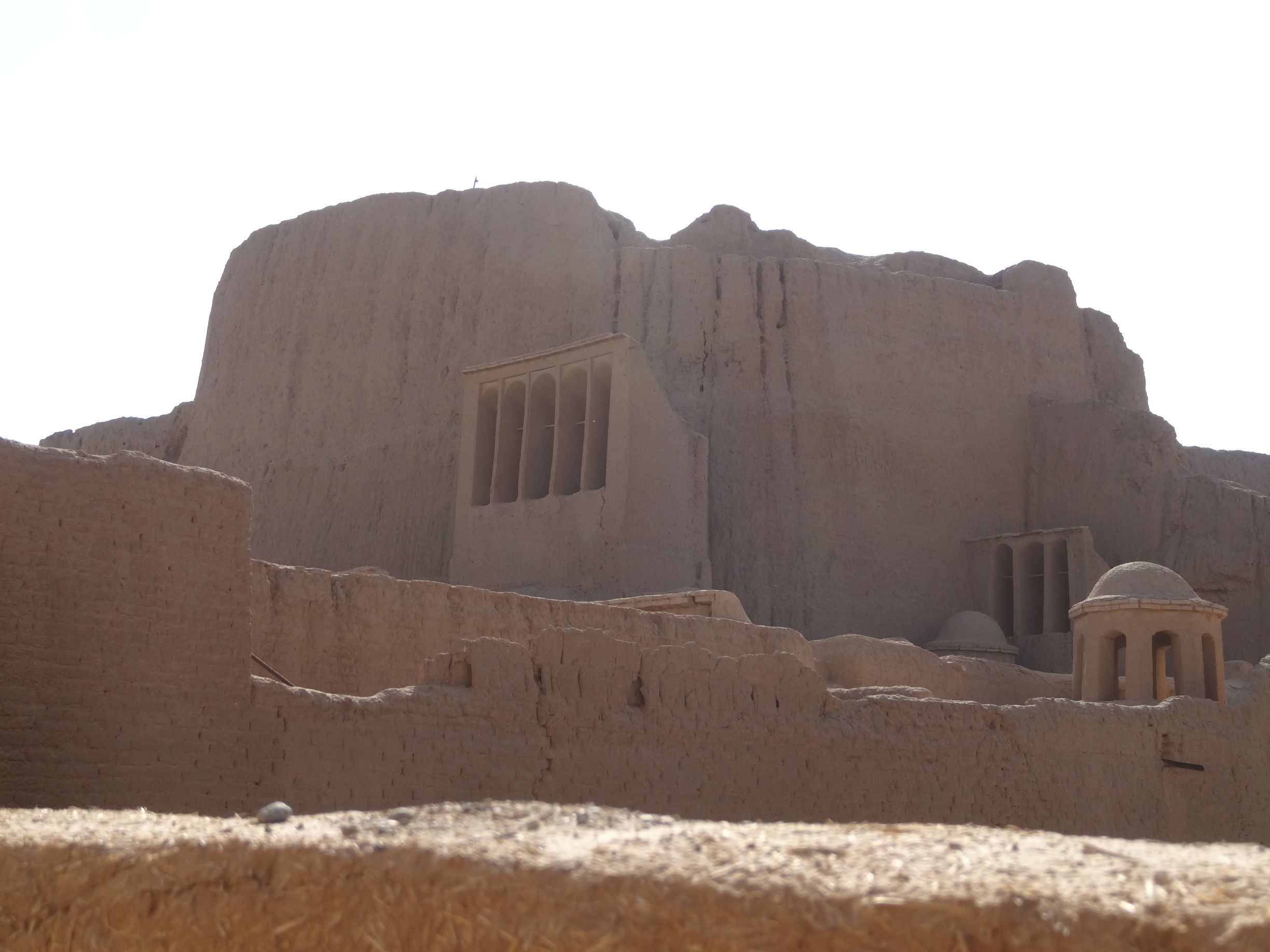 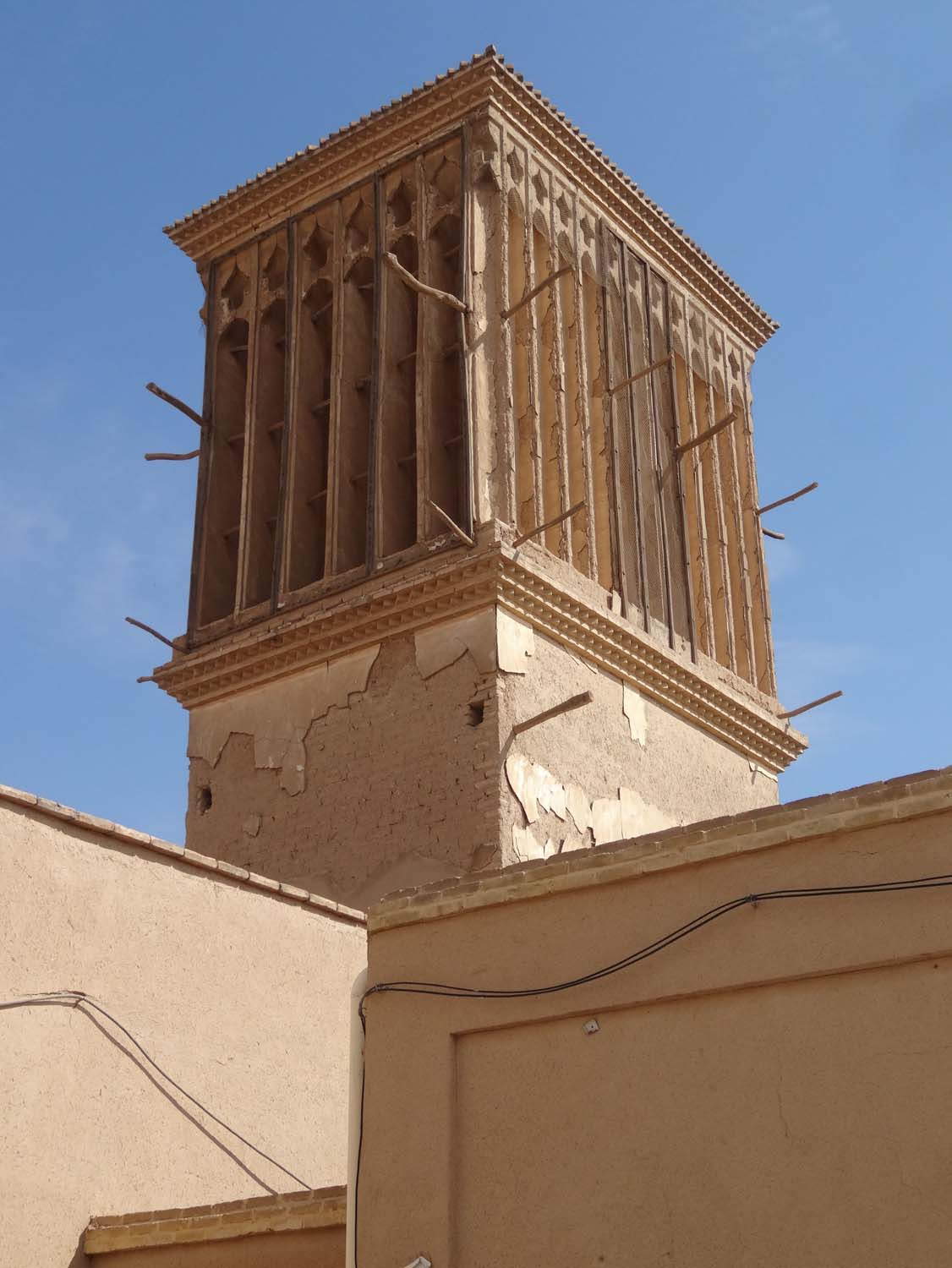 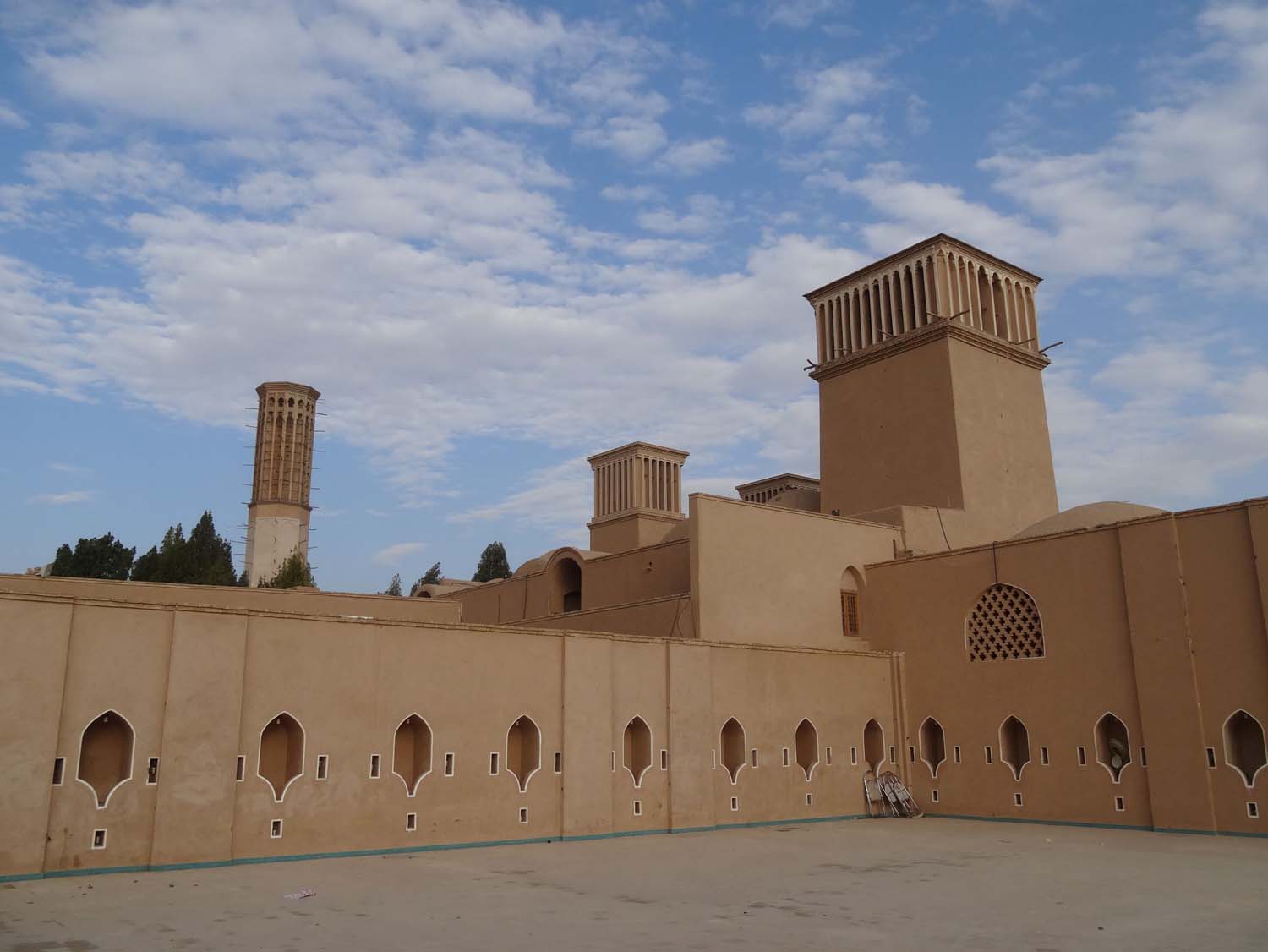 the tallest badgir in the world on the far left 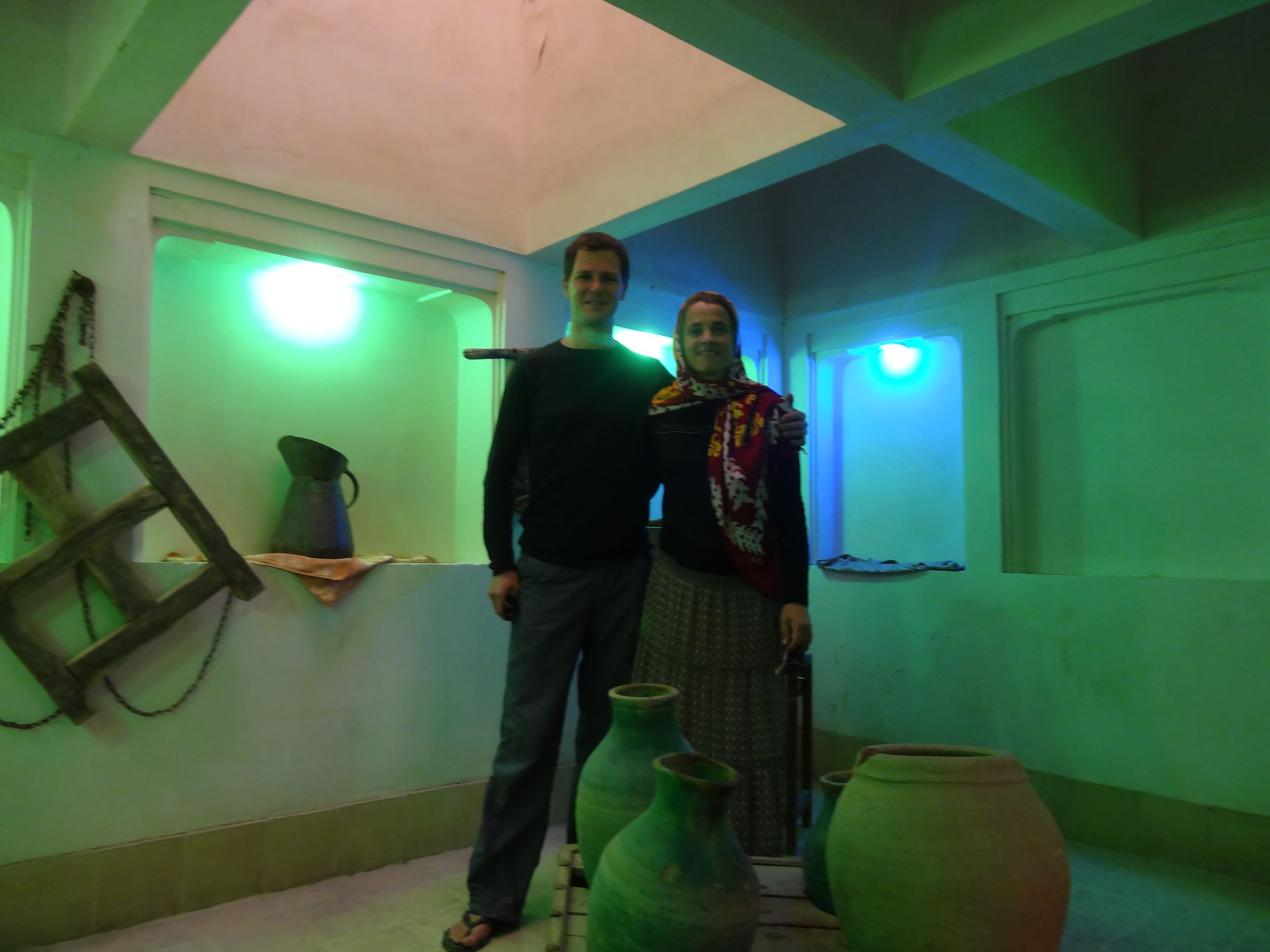 standing underneath a badgir, they really work

We saw another traditional way of coping with the heat of summer in the thousand year old small village called Kharanaq. The houses are built right on top of each other, leaving only shaded narrow pathways and stairs in between them. It is a fantastic maze of mini doorways, ridiculously steep staircases, balconies and hidden passageways, rather like something out of a Thousand and One Nights fairytale. Most of the village was in ruins, but some effort is being made now to restore the old part. It reminded us a lot of Siwa, a gorgeous oasis town we once visited in the far west of Egypt. With similar climatic conditions their old mud town (deserted now) looks much the same. 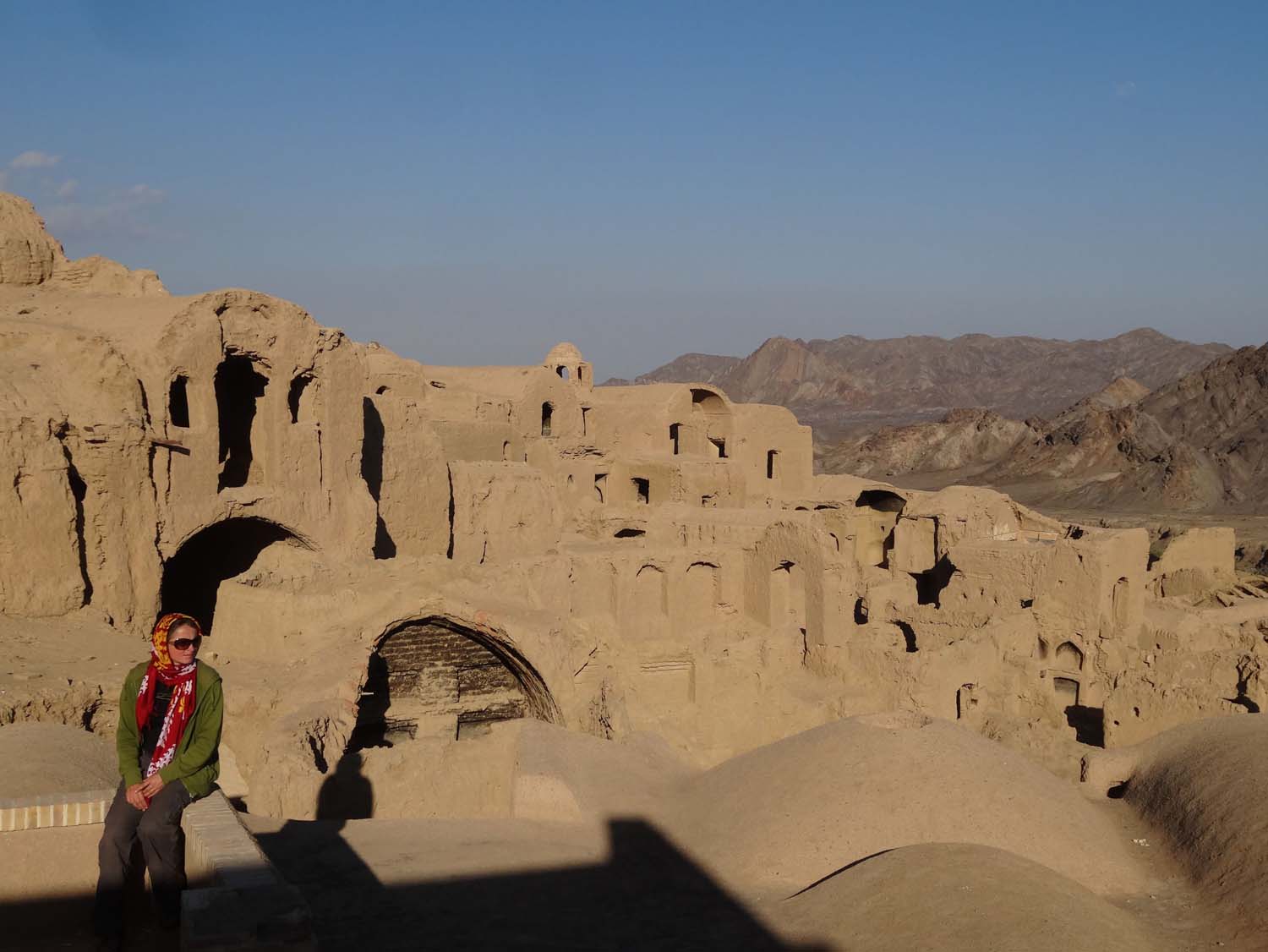 Around the corner from an 1800 year old Narin castle from the Sassannian times, the oldest mud-brick structure in Iran, we saw an ancient yakh dan (ice house) in Meybod. Another example of how they coped in the desert heat before electricity. It is located opposite the beautiful caravan serai and when standing in front of it you can see the top of a cone-shaped roof. Inside the yakh dan there is an enormous sunken bowl used to store the ice they would have collected in the mountains with their donkeys. Even in the searing summer heat they managed to store ice this way, using massive badgirs to keep the building cool. 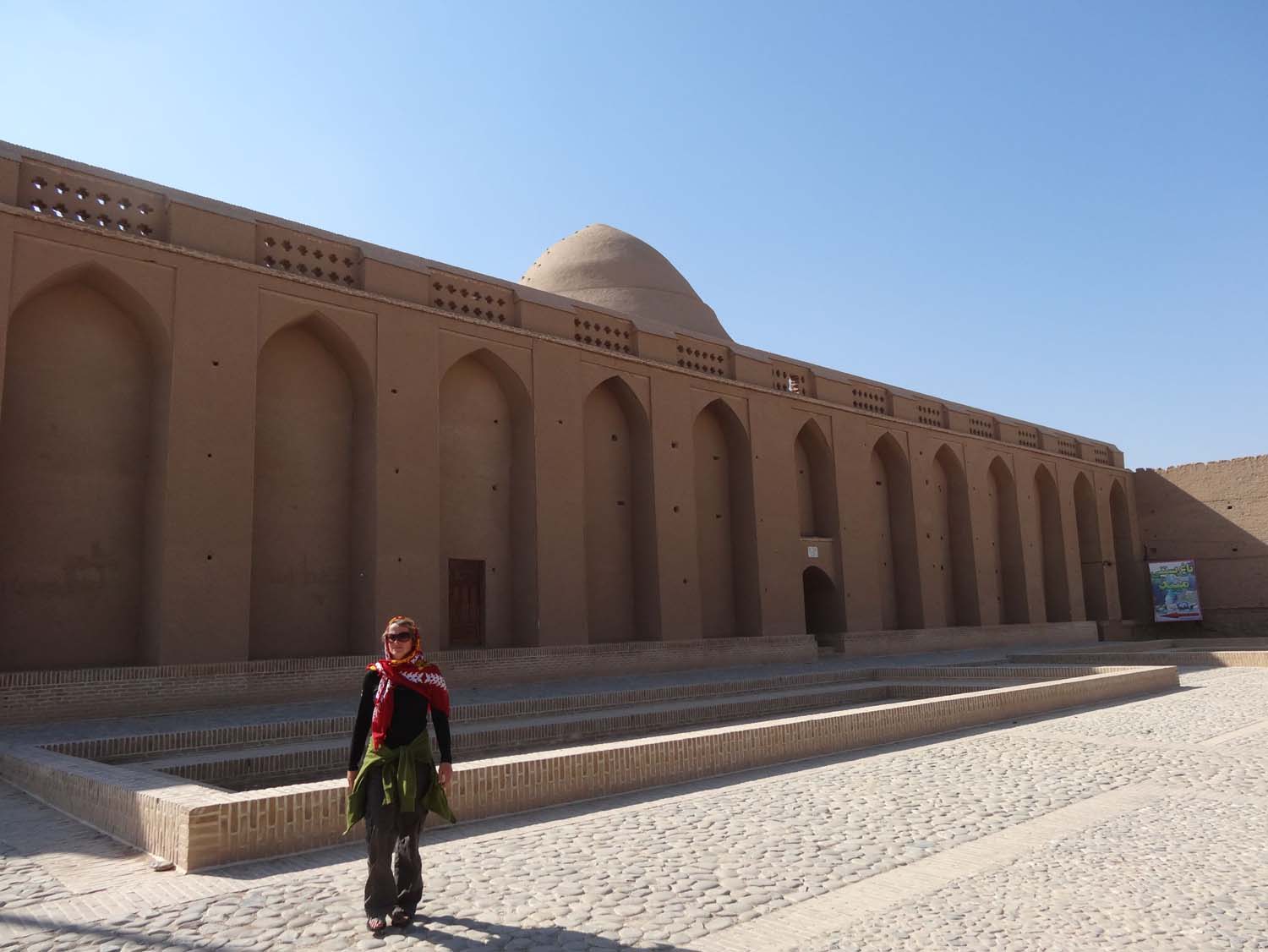