Apparently whalesharks hang around in Tanzania’s waters the whole year, but for 5 months of the year they come to feed in Kilindoni Bay, just west of Mafia Island. The bay is rich in nutrients from the outflow of the giant Rufiji River wich passes through Selous National Reserve. The plankton feed on the nutrients and the whalesharks feed on the plankton. The best chance to see them is from November until January, with sightings of 5-7 whalesharks feeding in the same area quite common.

After signing our life away and listening to the briefing we were on the water just before 7.30am. Jessie, the researcher on our boat, started to talk about the whalesharks as we headed out, trying to locate our first whaleshark. He didn’t even have time to finish before not one, but two whalesharks were spotted feeding in the same area. We all quickly put our fins on, grabbed our masks and snorkels and jumped in.

As we jumped in, we immediately saw the mouths of 2 gentle giants wide open, pumping the water through their gills as they were eating. They are so majestic, so impressive, it is just mind-blowing to see them so close. Words really do fall short when looking at these beautiful spotted creatures, the largest fish in the world. 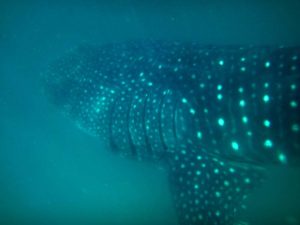 the patterns on their bodies are so beautiful

We were in and out of the water dozens of time that morning. By 9.30 we had already seen around 8 individual whalesharks with hardly enough time in between sightings to catch our breath. We ended up seeing around 12 different whalesharks, a devil ray and an enormous white and fluffy jellyfish. 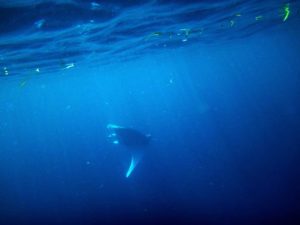 we even spotted a devil ray flying elegantly through the water

Whalesharks can live for more than 100 years and reach sexual maturity at around 30. The eggs remain inside the female’s body and they are thought to give birth to live pups (although nobody has ever witnessed this), which are born when they are between 40-65cm long. In Swahili they are called potwe and male whalesharks have 2 penises (!) called claspers. The biggest whaleshark officially measured was nearly 13m long and weighed about 21,500kg, but sightings of larger animals are quite common. 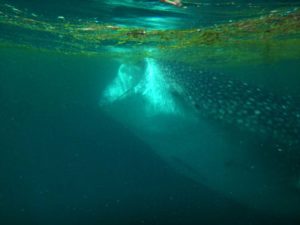 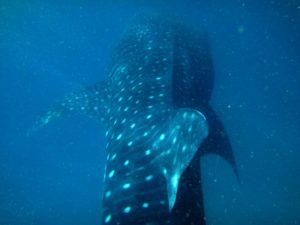 sometimes they swim right underneath you 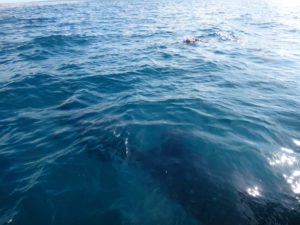 We managed to squeeze two dives in as well, and were absolutely amazed by the huge variety of fish, the enormous potato cods, the large number of lobsters and nudibranches and the biggest hawksbill turtle we have ever seen. He was probably as long as Jude. On the first dive Hamisi, our dive guide, led us into what looked like a little cavern, but turned out to be a cool little swim-through. In it was an enormous moray eel, probably around 6m long who wasn’t happy to see us and left as soon as we moved in. 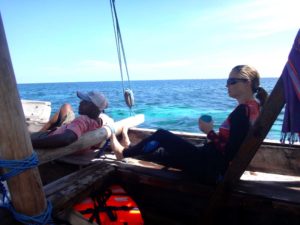 lunch was on the boat before jumping in for a drift dive, our second dive of the day 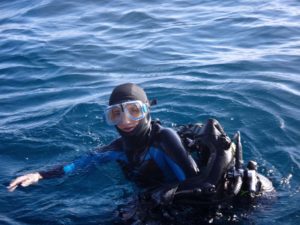 Our bed for the weekend was high up a huge baobab tree with views over the ocean and a daybed on the top deck to catch the afternoon breeze. Who doesn’t love staying in a tree house?! At high tide the waves were lapping the mangroves at the bottom of our treehouse, bats were looking for fruit at dusk and lots of birds visited the surrounding branches. Our little paradise! 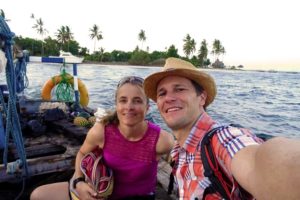 heading across in the dhow to our treehouse for the weekend 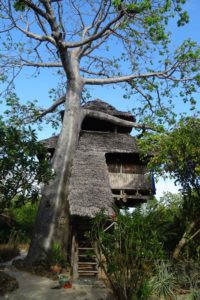 our treehouse underneath a majestic baobab 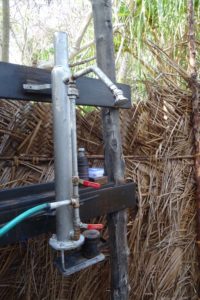 the ingenious shower system – light the kerosine, place it underneath the metal tube, wait 2 minutes and your shower is ready to go, good pressure too 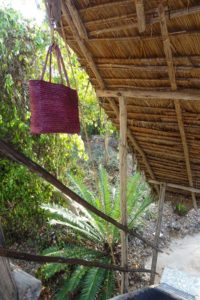 We stayed at Chole Mjini in a treehouse on Chole Island in the Rufiji Mafia Kilwa Marine Reserve, a fantastic place owned and run by Jean and Anne who give your stay a very personal touch. They organise plenty of activities and a dive centre is located just across the channel on Mafia Island. The diving in the Marine Reserve is absolutely amazing with a big variety of fish and a chance to see nudibranches, seahorses, lobsters, massive moray eels, large potato cods and of course turtles and reef sharks if you are lucky. 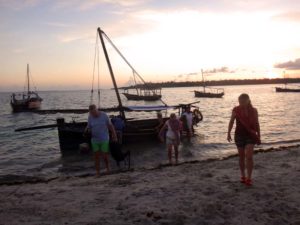 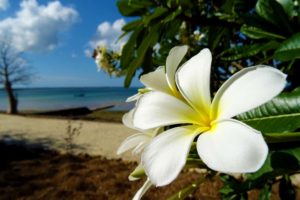 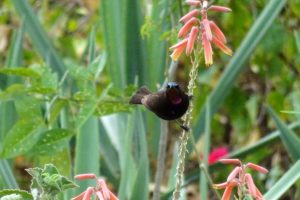 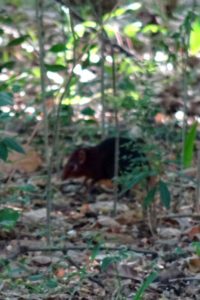 we spot 2 elephant shrews on the main island – they are fast! 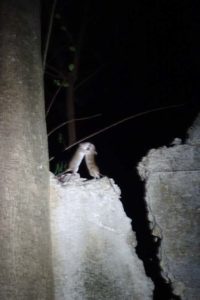 we had a romantic Swahili dinner with just the 2 of us in the ruins with candlelight, only disturbed by 2 fighting rats that fell down from the top of the wall – noisy buggers 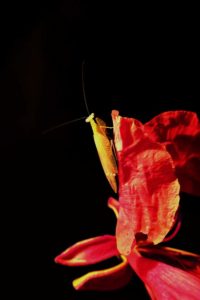 this beauty came to say hello at dinner, we had to rescue him from the flame of the candle