Months ago Birgit, a friend and fellow diver from the Dar es Salaam Yacht Club (DYC), decided to organise a weekend of diving to Mafia Island. The added bonus was the opportunity to stay an extra day to go snorkelling with the whalesharks as the season at Mafia Island runs from the beginning of October until March.

We had enthusiastically signed up and on a stormy Saturday morning we all met at the domestic airport in Dar with rain coming down in buckets. We were a little worried about this as we were scheduled to stay in tree houses over the weekend, which don’t have walls and only thatched roofs… 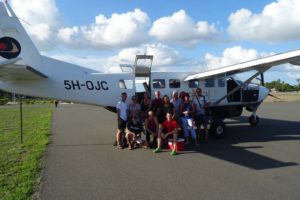 But, the weather gods seemed to be on our side as Mafia Island was bathing in glorious sunshine. After only a short drive we arrived at the dive centre, located on the main island. Our accommodation was a short boat ride away on Chole Island, but we weren’t going there yet. Our first 2 dives were already planned for that afternoon and after getting all our gear ready and signing our lives away on the obligatory forms, we were hopping into a beautiful, traditionally made, wooden dhow.

The team from the DYC consisted of 10 divers plus Anne, limited by the number of tree houses and divers that can fit on one boat. We were split up in 3 teams for the dives with 3 dive leaders. Marina & Michael and Jason & Gabriella were one team, Birgit & Gunnar with Fin the second team, and the two of us with Jurg the third team. We were diving with Peter, an excellent spotter as it turned out.

We didn’t enjoy the first dive very much as the current at Kinasi Pass was much stronger than usual meaning we drifted along uncomfortably quick. We were flying past everything, spotting schools of large fish, but not even having enough time to register what they were… We did find a huge sting ray in a slightly gentler current before being whisked off to the next dive site in a hurry again. In just 35 minutes we had all exhausted our air supply. 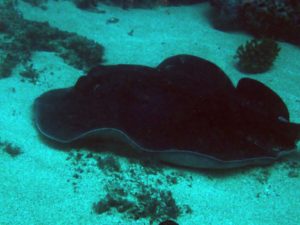 The next dive of the day, plus two more the following day, were much more relaxed. Lots of coral, huge numbers of fish, large and small, giant morays, turtles, octopus, shrimps, nudibranchs in every colour of the rainbow, as well as lion fish, flounders, garden eels, leaf fish and crocodile fish. Mafia Island has done a great job establishing its marine reserve, and it’s great to see the underwater wildlife thriving. 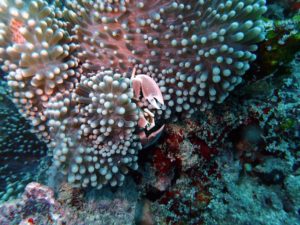 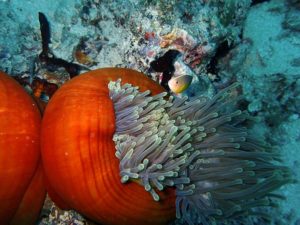 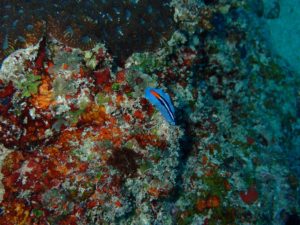 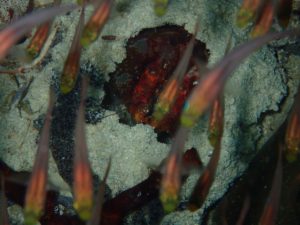 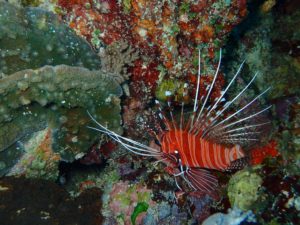 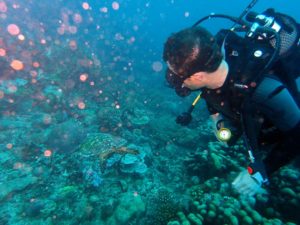 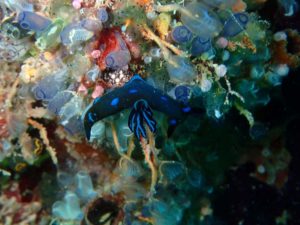 unknown nudibranch – let us know in the comment section if you know what type it is! 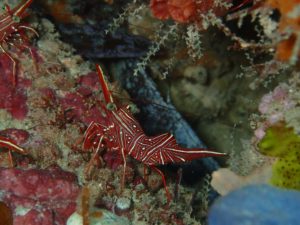 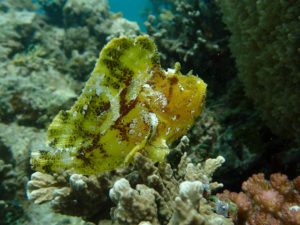 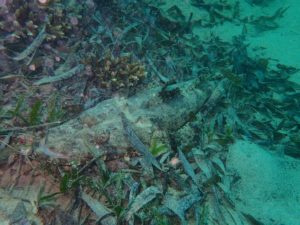 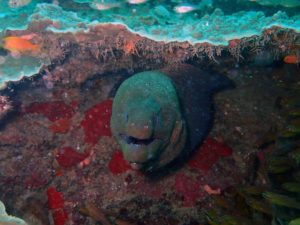 one of many giant morays we saw on our dives

We have stayed at the tree houses on Chole Mjini before and again it didn’t disappoint. The tree houses are awesome and have spectacular views over the mangroves and Chole Bay. At high tide the waves were lapping beneath our tree house, which we later discovered was the honeymoon suite! 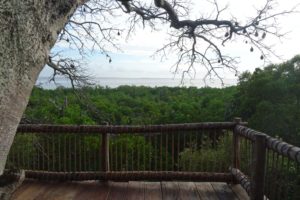 the view from our tree house 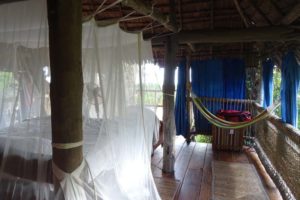 the inside of our tree house

We had some lovely dinners with the team, always in a different location on the property. And we even had time to head out for an excursion to the old ruins of Kua town (dating back to the 12th century!) on the neighbouring island of Juani. A palace, several mosques, a cemetery and many more ruins can be explored here if you have more time. We were however on our way to the ‘upside-down jellyfish’ pool for a swim, before SUP’ing back through the channel between the islands, so it was a busy afternoon. 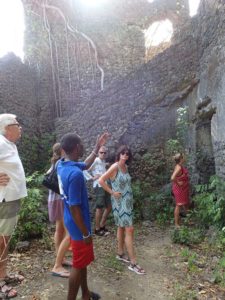 listening to our guide explaining the history of the palace ruin on Juani – Jurg, Marina, Gunnar, Birgit and Anne 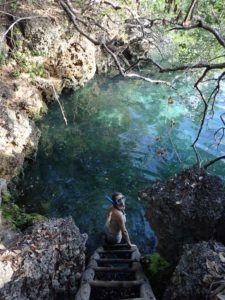 Jude heading into the lake with the upside-down jellyfish 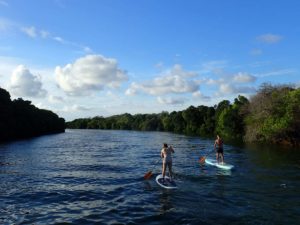 On our last morning we had an early breakfast under the shade of a big tree before saying our goodbyes and jumping into the small dhow to take us across to the main island again. From there we drove back to the western side of the island, just past the airport, to board another stunning dhow for our whalesharking adventure. 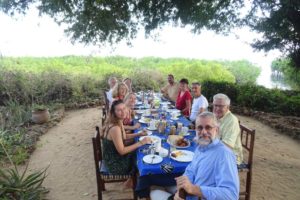 Jean, the owner of the tree houses lodge, also operates Kitu Kiblu – the organisation that runs responsible marine encounters with whalesharks. He was going to be our guide for the day, which was great as he has become incredibly knowledgeable over the many years he has being running the snorkelling trips.

Every year around October the prevailing wind changes from the south (Kusi) to the north (Kaskazi) in this part of the world. When that happens the nutrients from the Rufiji River and plankton is blown into the relatively small area on the western side of Mafia Island, meaning the whalesharks all congregate in a small area. It’s not that they are not around the rest of the year, but from October to February or even March, they are just easier to find as they are generally all in this smaller area.

Uncharacteristically and unfortunately for us, the wind hadn’t changed yet for the season, even though we were already in the first week of November. Nonetheless, we set out, hoping to find a whaleshark or two that would allow us to jump in with him (80% of the whalesharks in this area are male) and grace us with the enjoyment of his presence.

Last year it took us 10 minutes before we were in the water with the first whaleshark. This year we were searching in a much larger area in the hope of spotting one. And not only would the larger area make it more difficult to find them, there was another reason why they were harder to spot this time. The food they are looking for has not gathered in one small area, again due to the lack of the northerly wind. This means the whalesharks are not at the surface feeding with their large mouths open and their fins sticking out of the water. Instead they are cruising a few meters beneath the surface, looking for spots with food.

We were searching for the equivalent of a needle in a haystack, albeit a rather large needle.

But, we got lucky. We spotted a 4.5m whaleshark cruising a few meters under water and he allowed us to swim with him for a while before a second boat arrived and we let them have a go whilst we had a cuppa and a snack. Swimming with these majestic fish is mesmorising – you can’t really take in just how big they are (even though these are only adolescents) and how effortless their movement is. 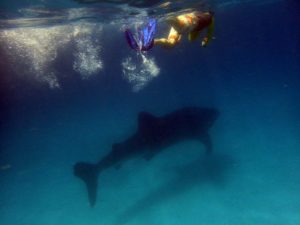 Jon with the first whaleshark of the day

Then another whaleshark, slightly larger, was spotted by another boat and we cruised over to wait for our turn. We stuck with this one for a while, especially Jude who swam with this whaleshark for a long time, long after everybody else had given up. It was pure magic to be alone with such a beautiful and relaxed creature, especially when he nearly came up to the surface almost beside her.

Jude finally gave up as he slowly disappeared into the deep blue. The group was contemplating heading back to shore as a massive thunderstorm was brewing not far from us.

On our way back the spotters saw another shadow, again in shallow water. Of course we headed over and got ready to jump in. Jude was the first to glide into the water, right in front of the whaleshark and immediately realised something was very wrong. The poor animal had a fishing net strapped around his head, even preventing it from opening his mouth! He could just open it slightly, maybe 20cm. Immediately she popped her head out of the water to alert Jean as the boat was still very close. A knife was needed to cut this net off the poor whaleshark! 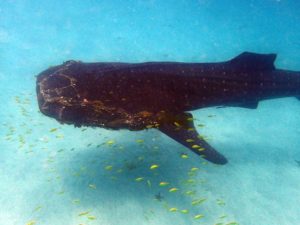 Jude immediately spotted the net wrapped around this poor whaleshark, note his dorsal fin has been almost completely cut off 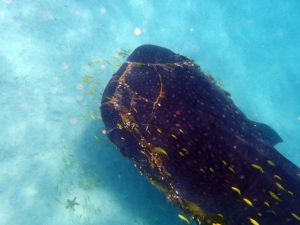 Everybody jumped in, and Jean found a pair of scissors in the first aid kit that would do the job. He is a pretty good free diver and although a few others tried to swim down and pull off the net, it quickly became clear the net had been there a long time as the skin was stuck to it. The only way to get it off would be to cut it free. 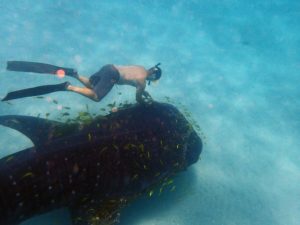 Jean starting to cut off the fishing net 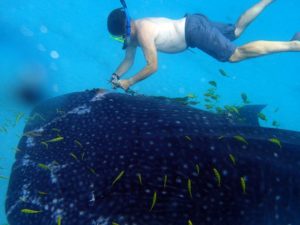 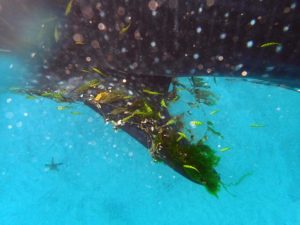 the fishing net is draped across his pectoral fins too

It is amazing this poor fellow is still alive. Not only has he been wrapped up in this horrible net for who-knows-how-long, but at some time in his life his dorsal fin has been cut off to be sold for shark fin soup, and somebody has even cut a triangle out of his tail for the same purpose! This poor animal certainly has seen some of the worst of humanity. Hopefully he’ll now also remembers us, the humans who tried to help him…. 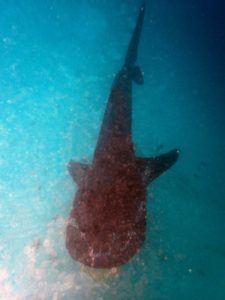 not a great photo, but you can just make out the triangular cut out of his tail for the shark fin soup market

And it seemed like the whaleshark knew we were trying to help. Even when we hurt him (we could occasionally see him jerk his head in pain), he would continue to cruise slowly. One powerful flick of the tail would have seen him disappear into the distance, but he didn’t. He allowed Jean to keep at it, diving time and time again to cut off yet another piece of the net. And slowly but surely, his head was getting clear and we could pull off the loose sections of net, also dragging back over his fins.

When he was clear of that horrible net, he continued to cruise slowly with us through the shallow water, before slowly picking up speed and disappearing into the distance. Jean recognised the shark from his cut off dorsal fin and missing triangle in his tail. He will hopefully continue to see him and if we hear any update about ‘Nick’, we will definitely let you all know! 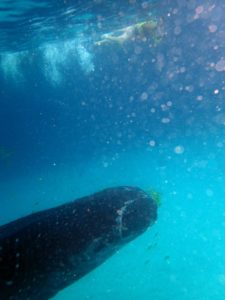 Jon snorkelling in front of the whaleshark, now free of his horrible fishing net

He now has some more horrible scars, and even one eye was badly damaged by the net, but hopefully he will fully recover and continue to thrive against all odds! 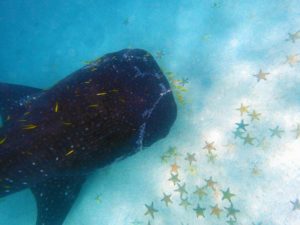 free of the horrible fishing net, you can now see the serious scars it created

If you have a little over 2 minutes to spare you can also check out our video footage of the whaleshark rescue.

We used the Mafia Island Diving centre for our dives (PADI 5*), a place that also offers accommodation. As a member of the dive section at the DYC you get a discount here. They have good equipment and experienced dive leaders and take you out on a traditional wooden dhow.

We visited the following dive sites on two double dives: Kinasi Pass and Coral Islands on the first day and Msumbiji and Milimani South on the following day. All dives were in the bay due to tides and weather.

We stayed at the tree houses of Chole Mjini, a lovely place with rooms built around giant baobabs. This time we stayed in number 1 (last time we were in 4) and had a private balcony overlooking the mangroves and the bay beyond. At high tide the waves were lapping right beneath our tree house. We loved both tree houses.