Yes you read that right, washing machine. We are getting soft in our old age and have succumbed to the suggestions of Mark and Kristy to add a washing machine to the palace.

They have one and they love it. But the majority are super expensive and large. But then Jude found this one on marketplace for a very small price so we snapped it up on the way to the airport when we were off to Europe and left it in the car for the time being.

When we came back we unpacked it and hoped it would fit in the palace. In the spot we had originally planned to put the webasto heater, we have now parked the washing machine. It fits perfectly.

There’s not much to say about it really. It is electric. You add your dirty clothes, water and some washing powder and turn it on. Then you remove the water and spin your clothes and hang them to dry. Easy peasy as they say. 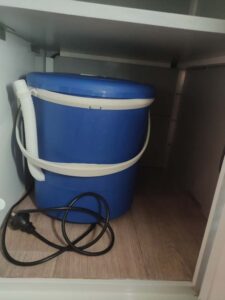 our new Companion washing machine, plenty of space for it

We have already used it and it works a treat. The washing space is actually quite generous and we can fit several items in it at once. It is as big as the entire bucket, and it only uses about 6L of water (filled to the minimum line). The spinning basket is a lot smaller so that will take a few sessions after washing, but that’s ok. It is very fast (only takes minutes). 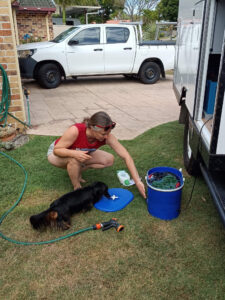 Our washing machine in action for the first time, it has quite a large washing capacity

The o-rings on the basket had disintegrated and when we put the first load in the basket we ended up with lots of little black bits on the lid. A trip to Bunnings and the purchase of some new o-rings solved the problem and now we have a perfectly good spinner too.

After doing our first load of laundry, we realised that our single washing line on the awning doesn’t provide nowhere near enough space when you actually wash your own clothes, so we have also added some washing lines to the ceiling of the palace. We will of course also have lines outside when we are parked somewhere, but this way we can hang anything that isn’t dry when we need to move on inside the palace to finish the drying. We could even turn the fans on to help in the process. (photos are coming soon)