We need your vote on the title for this post as we couldn’t agree which of the above is better for this story.

It all started after we entered Kyrgyzstan via the Karkara Valley, a high-altitude border crossing only open in summer. We crossed here as it was close to Karakol where we did our 5-day hike with Onno and Tamar, before driving west towards Lake Issy Kul and Bishkek (the capital). 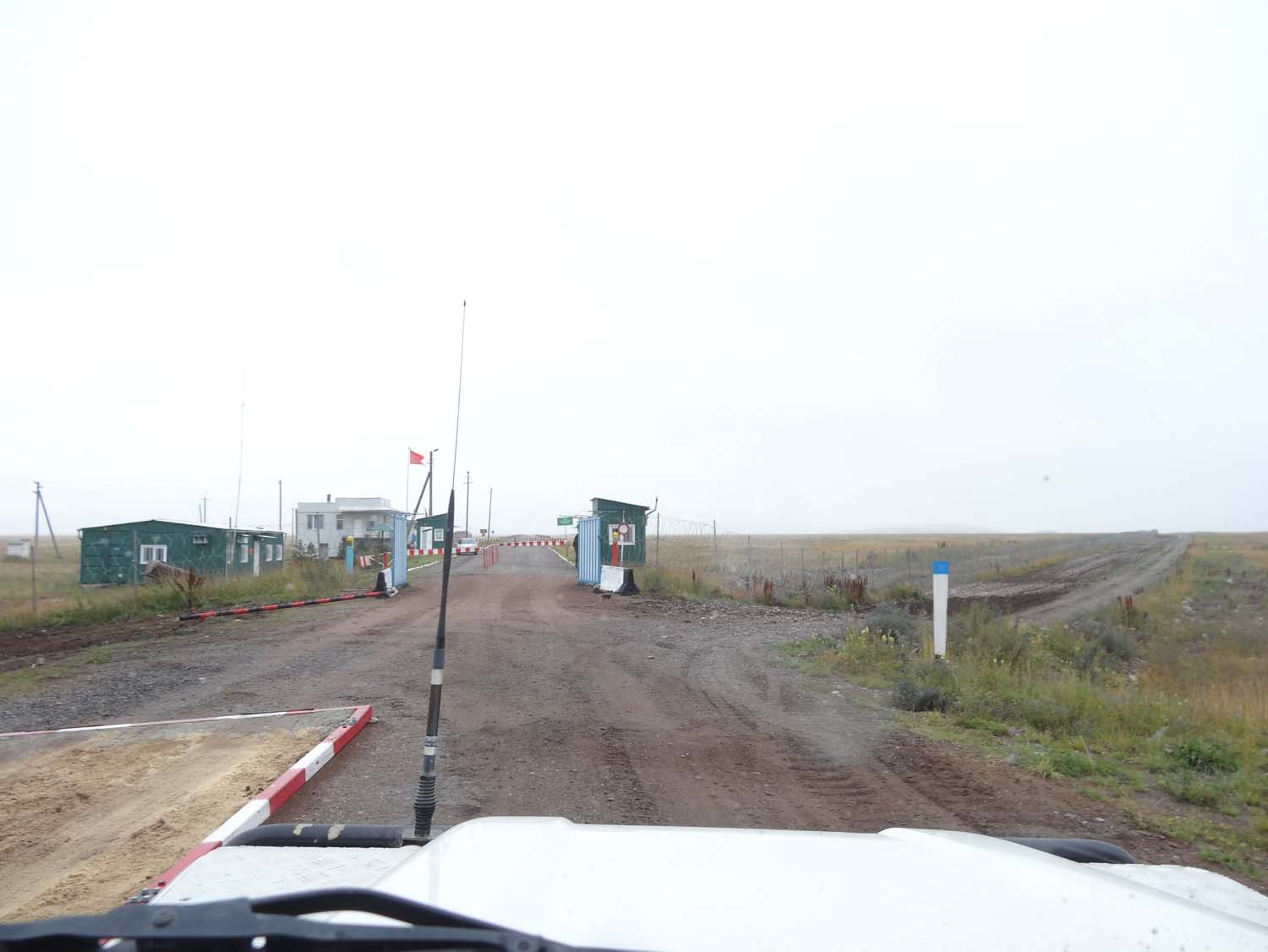 Before reaching the lake we stopped at Jeti Orguz, another beautiful valley in the area with dramatic red rock formations where we enjoyed lunch next to a babbling clear stream. We reached the lake around 4pm, early for us, and found a perfect campground right on the wind-still water’s edge. We were expecting the lake to be head-numbingly cold, but actually found it a lovely temperature for a proper swim (and wash of course). The rest of the afternoon we read our books and did some little jobs around the car. 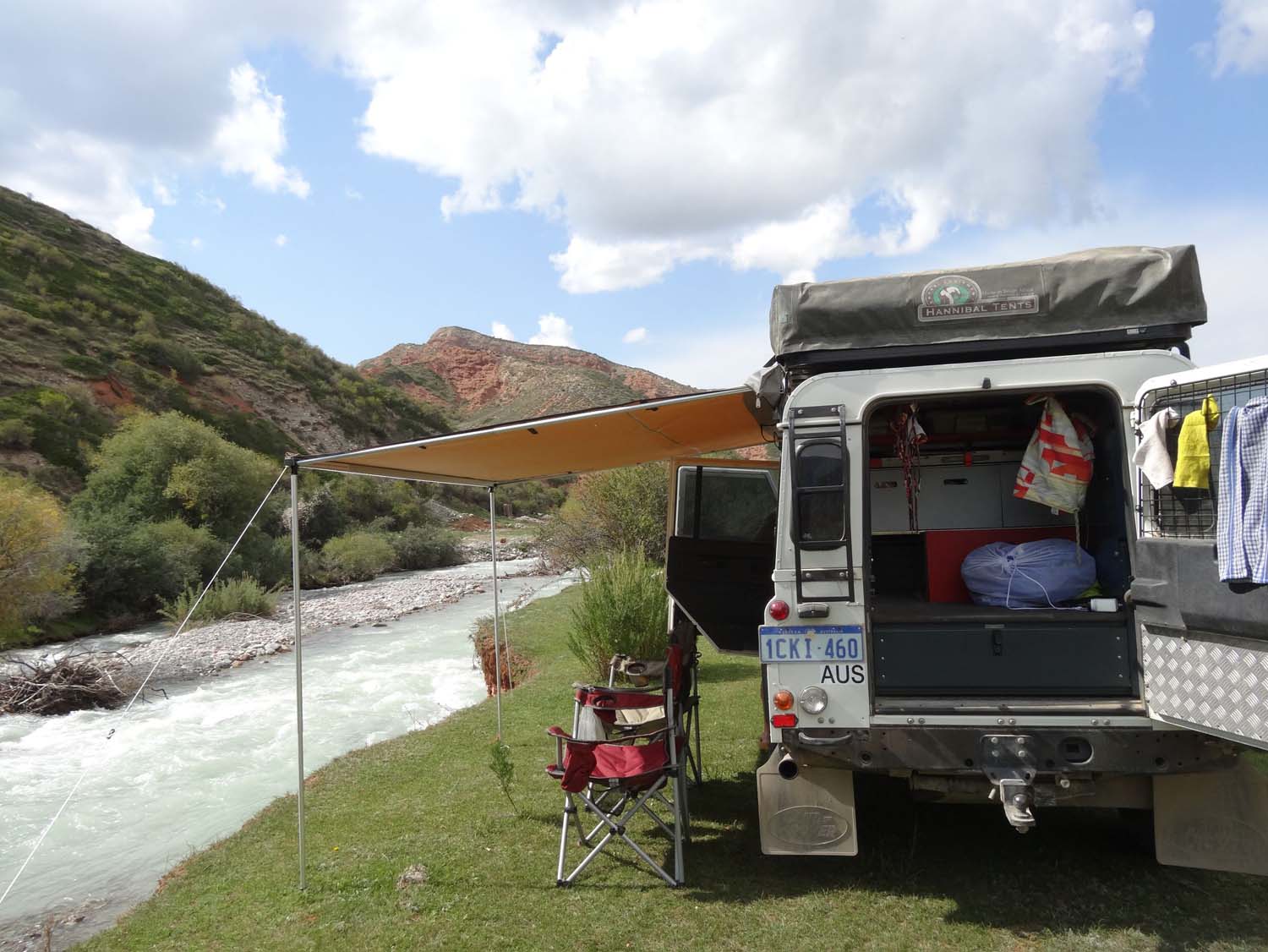 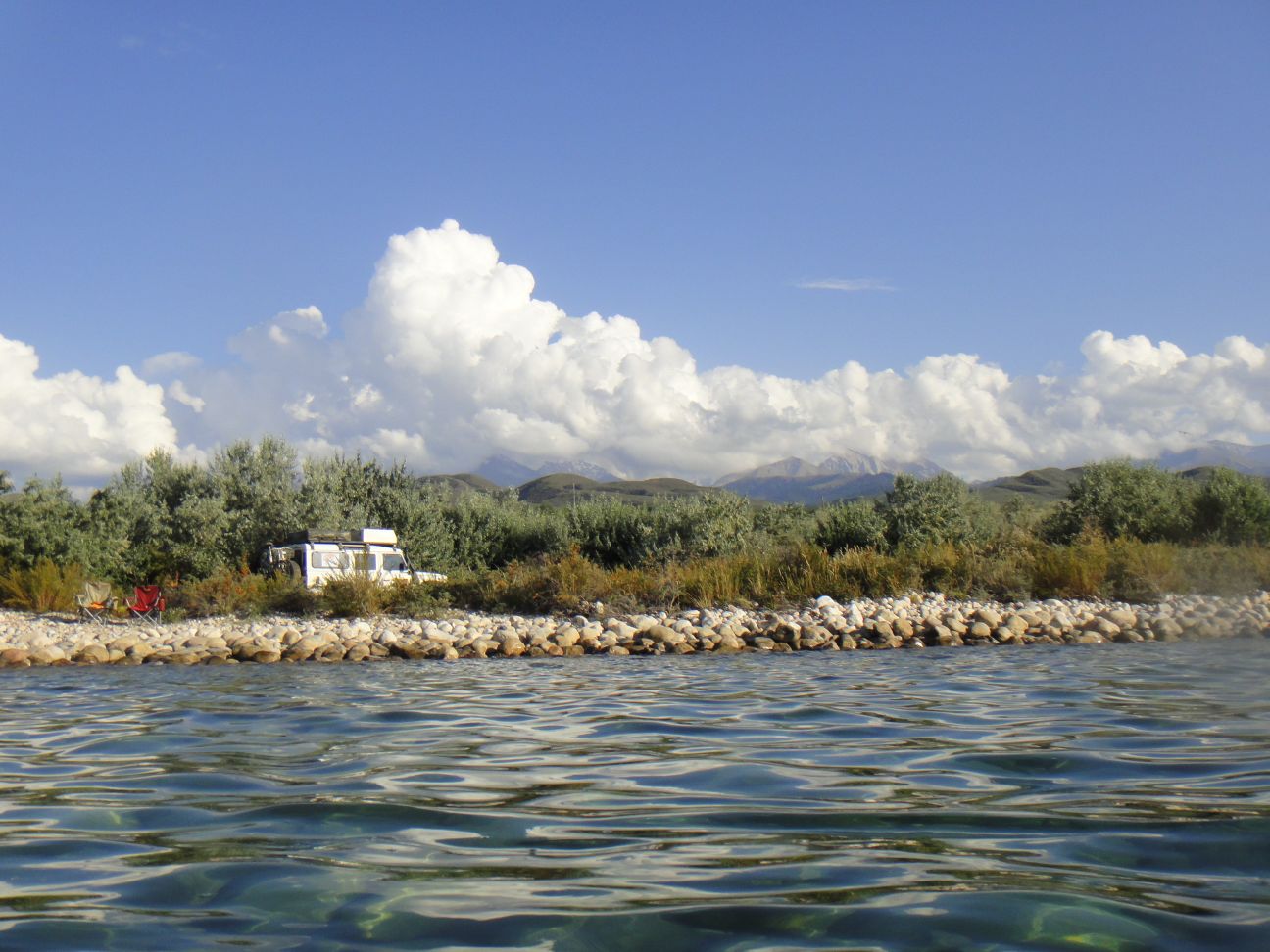 our campsite on the shores of Lake Issy Kul, snow-capped mountains in the background 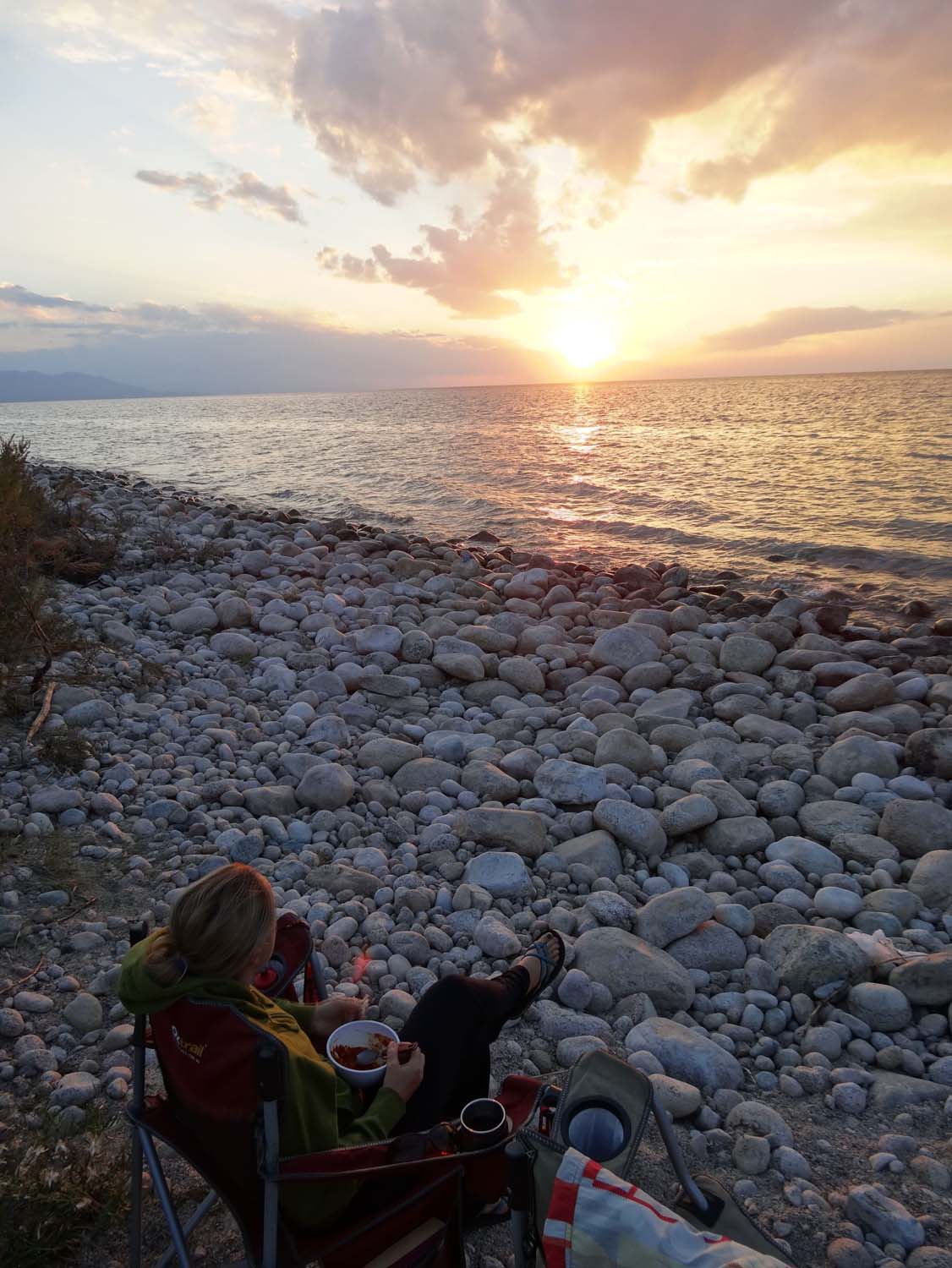 sunset over Lake Issy Kul whilst enjoying our dinner 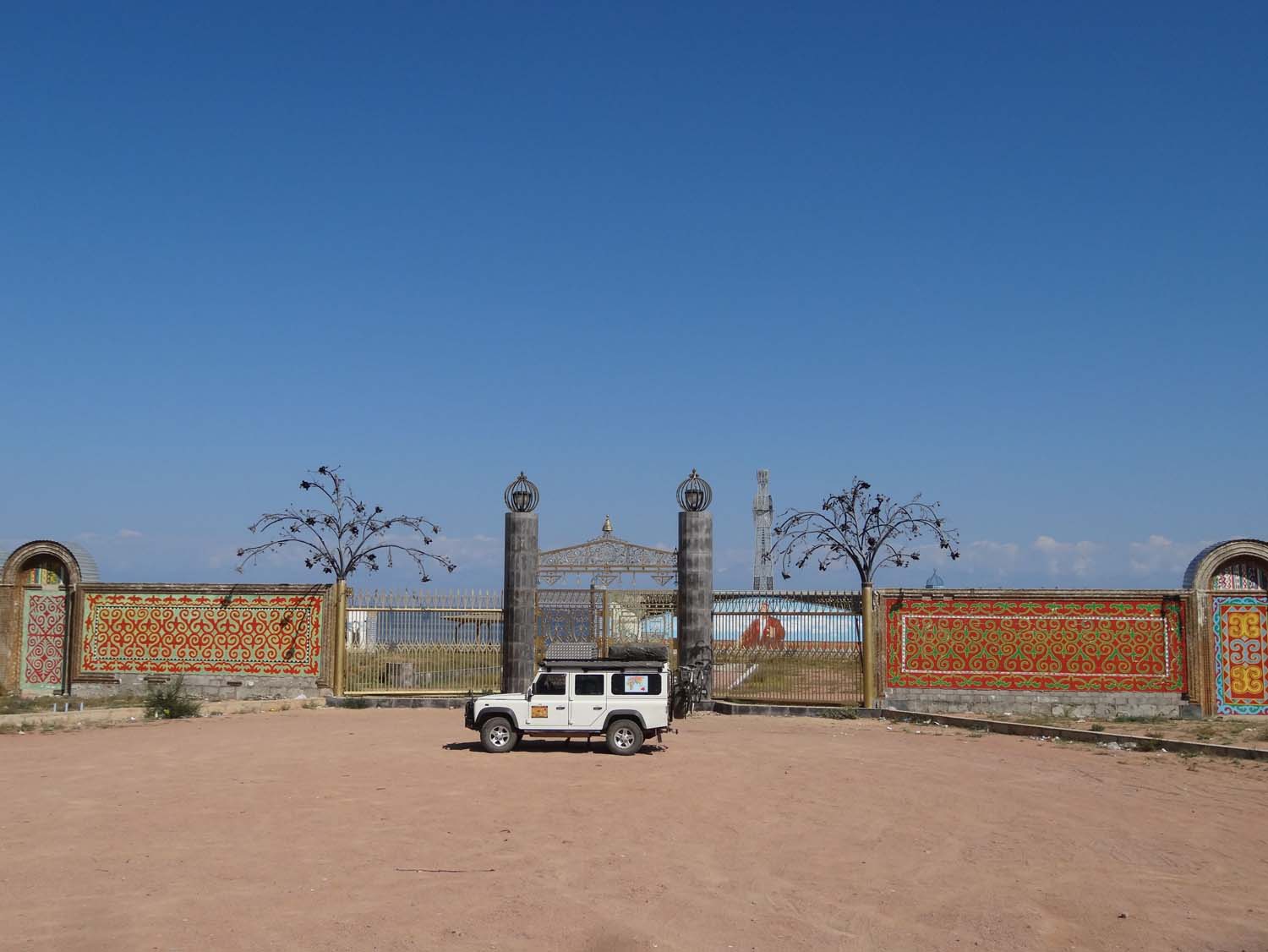 we came across this random resort on the shores of Lake Issy Kul, built for the son of the president, but never finished…

The next morning we reached a tiny town where we enquired about the local eagle hunters. We were lucky, later that day one would be happy to show us the ancient skill of the mighty eagle catching and killing a sweet innocent bunny rabbit. We were all ears and decided to hang around.

Talgar (the eagle hunter) and Tomara (the eagle) were amazing. Tomara is a 10 year old female golden eagle, weighing 6kg and with a wingspan of 1.5m, she can see pray at a distance of 8km with her razor sharp eyes. She also happens to be twice the champion of Kyrgyzstan and is even capable of hunting wolf. The eagles (always females) used for this traditional way of hunting are caught from the nest after they have just learned how to fly. They are then trained by one master only and used for 20 years hunting in the winter months before being released back into the wild. They kill by grabbing the snout of their pray and then breaking their neck. She feels for the pulse of the animal with her very sensitive claws and when she no longer senses any life she will start to eat. 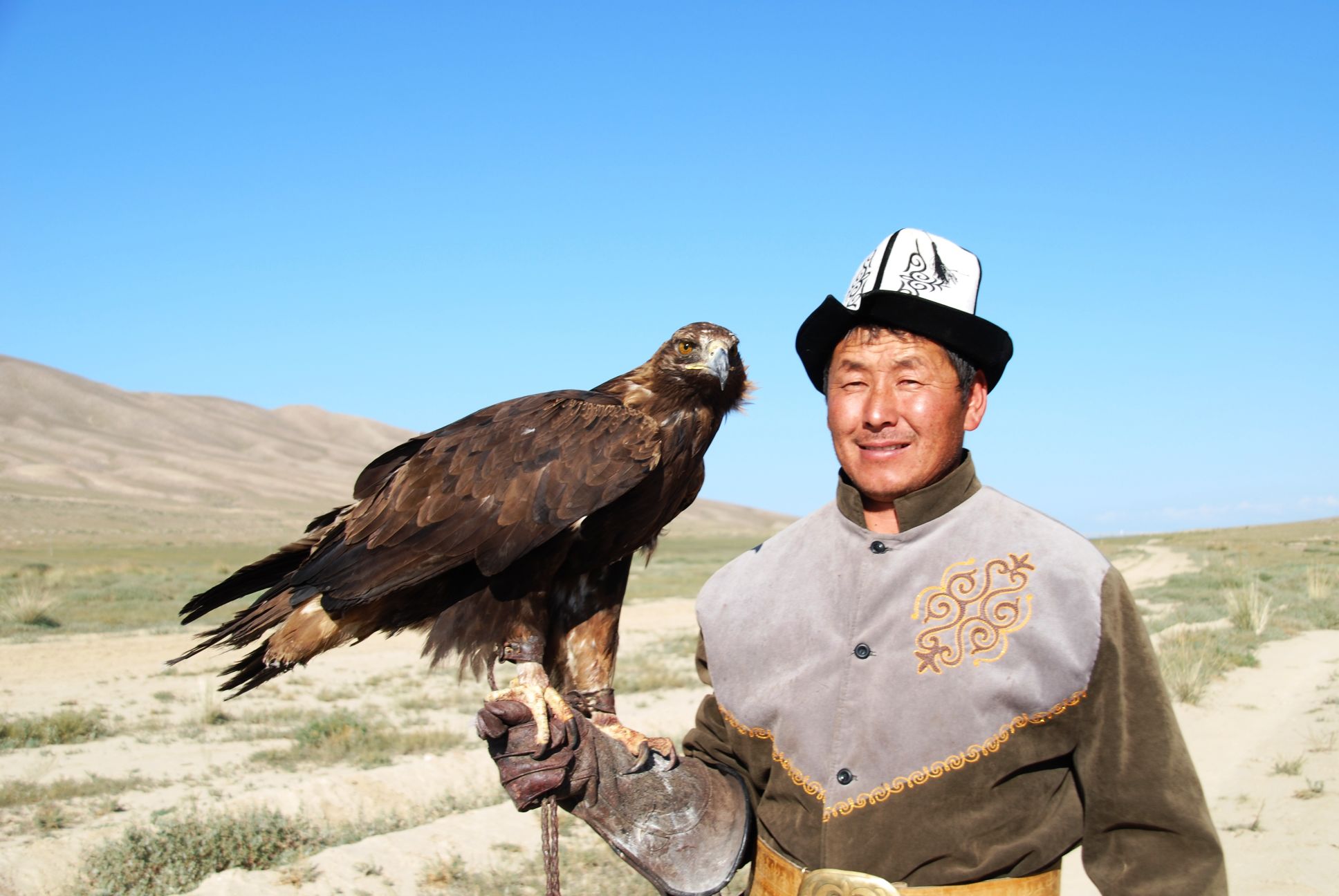 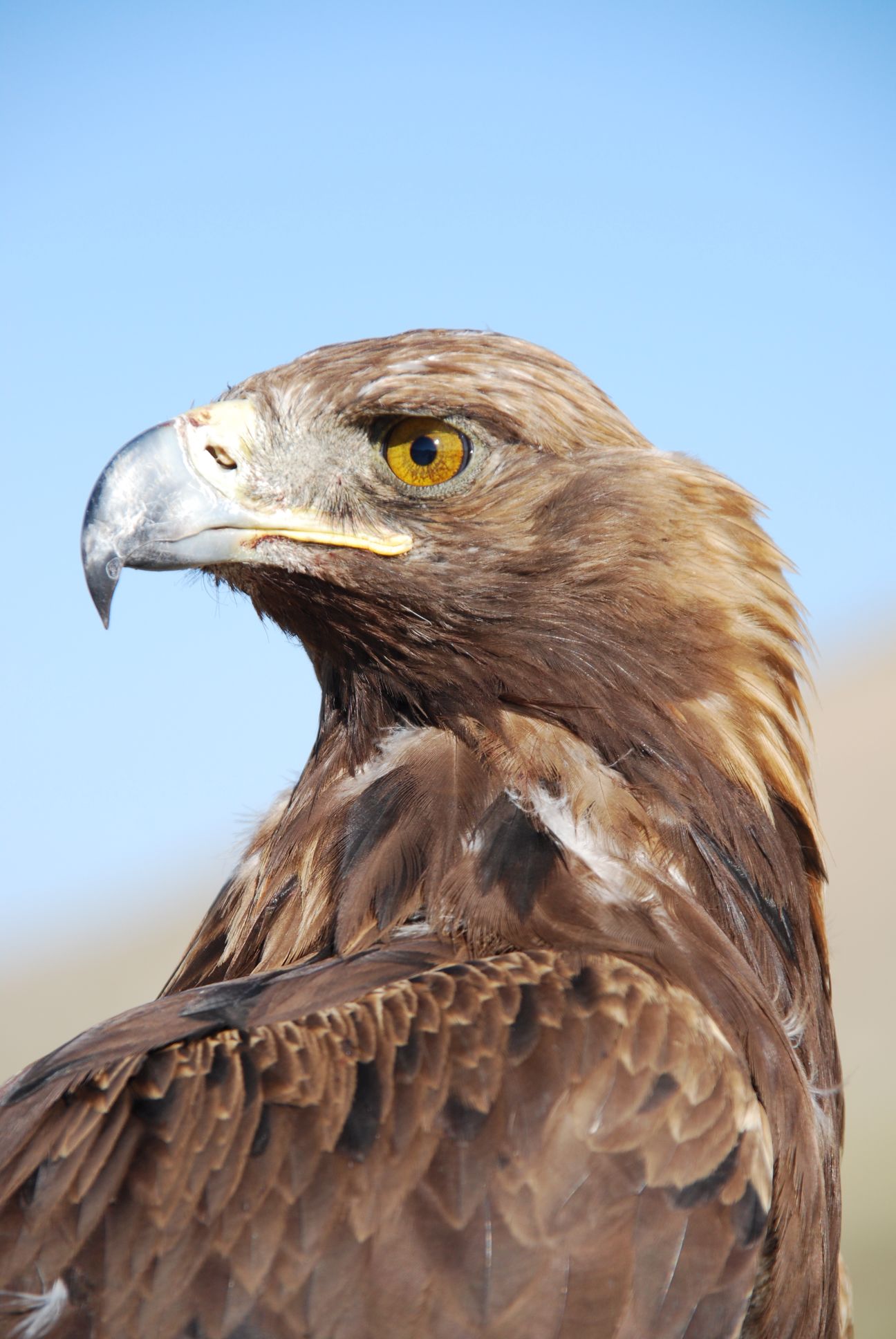 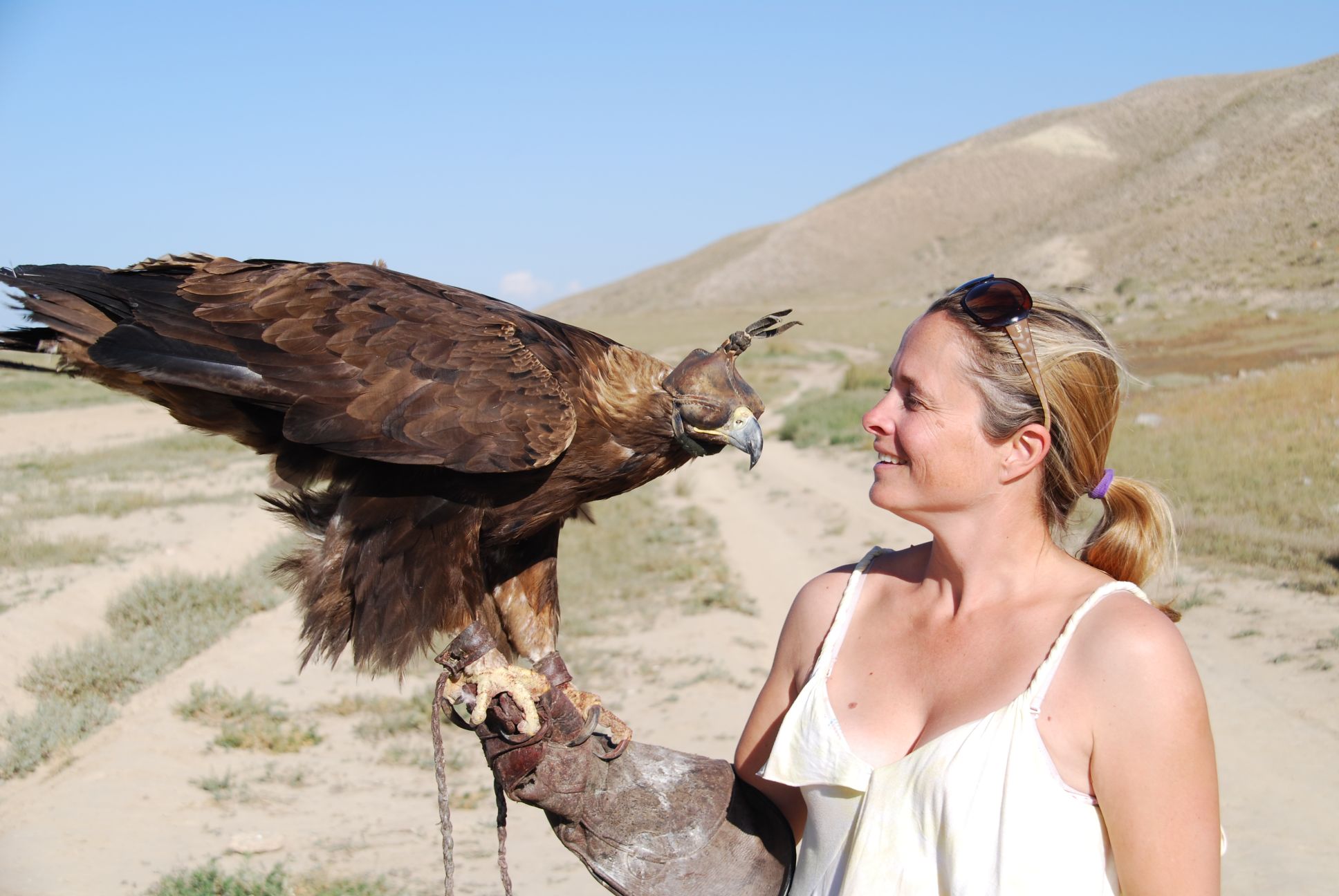 We saw this all demonstrated within a few minutes as she was released from a hill top to spot the rabbit in the middle of the valley (near where we were standing) instantly. A few seconds later she was sitting on top of the rabbit and was happily plucking away at her treat. Simply amazing to watch. 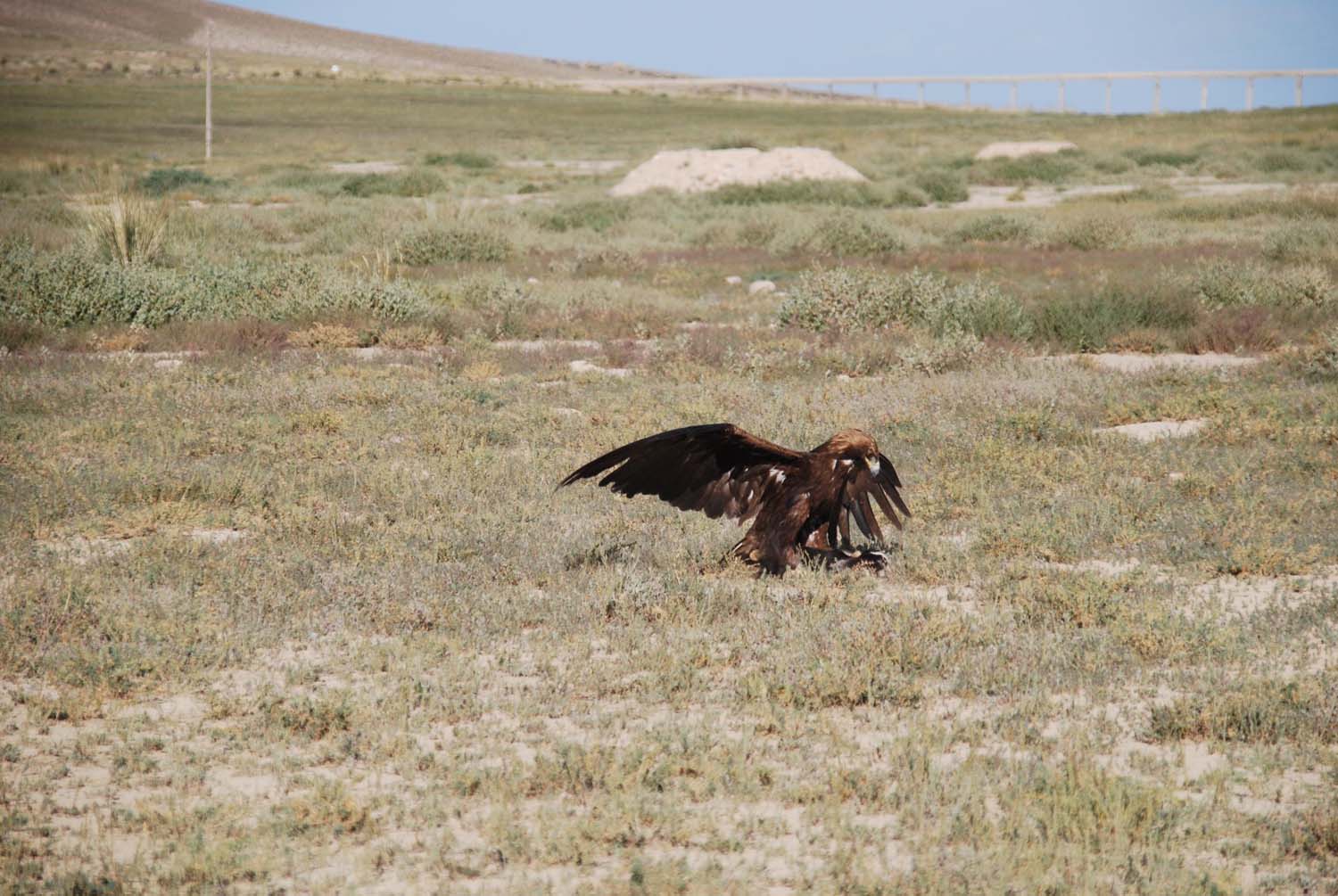 After a while we said our goodbyes and she was popped into the boot of the small car again to drive home. I guess not only sheep and goats are transported that way, also a stately eagle finds herself in the back of a boot when she needs to travel anywhere. 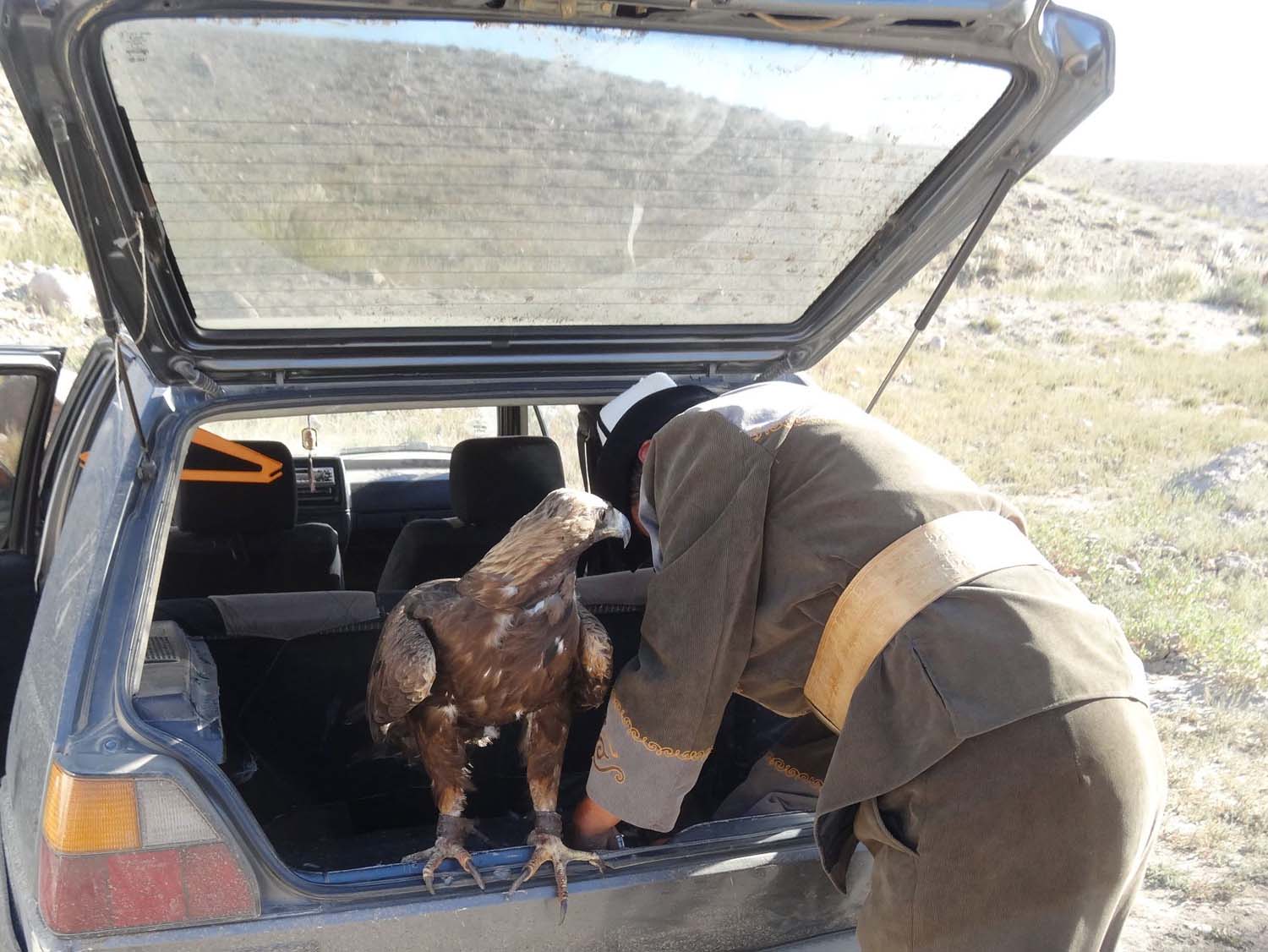 stately golden eagle travels in the back of a little car…

We continued our journey further west along Lake Issy Kul and as the Lonely Planet raves about a small salt lake, close to the shore of Lake Issy Kul, we decided to have a quick float before setting up camp on a nearby beach. The salt lake didn’t rate high in our books, but we did find some very tiny interesting fish whizzing around using their bright red tails. Anybody have any idea what they are? (see photo) 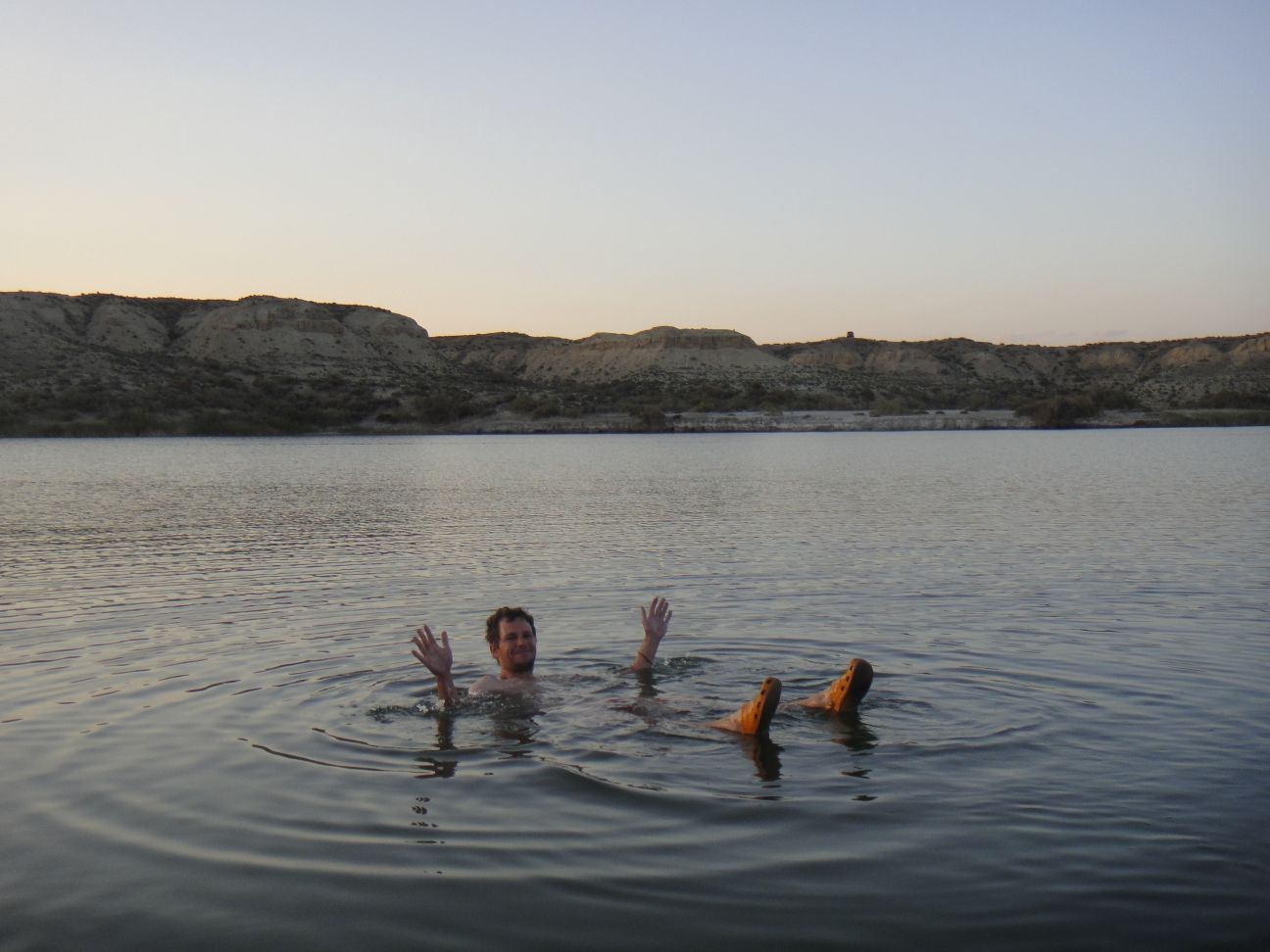 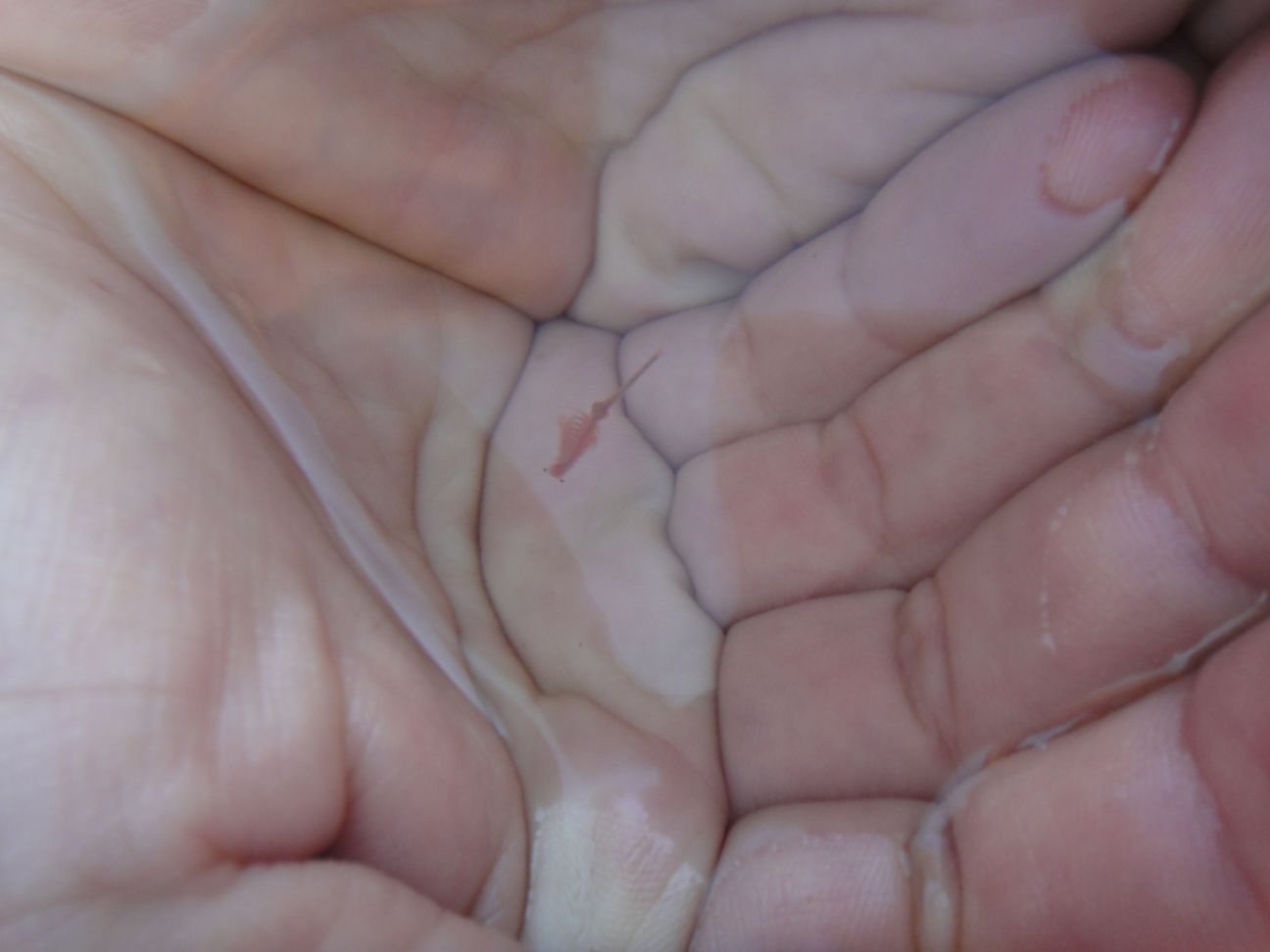 anybody know what this is? Is it a fish?

After successfully having managed to avoid being stopped at all of the many police checks and even more speeding cameras in Kazakhstan, we were enjoying the smooth new tarmac road towards Bishkek and must have missed the speed limit sign. Even with road works all around, Jon thought 30km/hr was just too slow…

They were hidden around a long sweeping bend and the orange baton came out, pointing at us. We pulled over and after a while the policeman came over to our window, indicating to Jon he should follow him. Jon was shown the video footage of him doing 83km around the corner. Luckily for us the speed limit hadn’t been 30km, but 60km. After filling in some ‘official’ paperwork as his commander was sitting in the car too, the fine was set at 500 som (approximately $10). No licence was checked and only a surname and signature were needed on the half-completed document.

We were never offered a copy of the paperwork, and with the fine being this small we decided to high-tail it out of there (at 60km an hour of course). Jon’s second ‘fine’ of the trip after being recorded on video. Not bad after the many kilometers we have already driven so far. Scores on the doors: Jon 2 – Jude 0. And then we’re not even mentioning the hush money paid when Jon reversed into somebody’s bonnet…

Continuing our way into Bishkek after this unwanted hold up, we stopped for lunch at the Burana Tower. The tower is the only thing left standing of what once would have been a very impressive mosque, the tower would have been one of its minarets. But for us the biggest appeal of the site were the many baubals grouped together. Finally we saw in the flesh many of the stones we had been looking for so hard in the Altai Republika. Many on display still had their faces very visibly carved into the rock, amazing when you think they are 2,000 years old. We had to wait until a young Kyrgyz boy-band had finished recording their latest video clip amongst the baubals before we were allowed to finally admire them from up close. 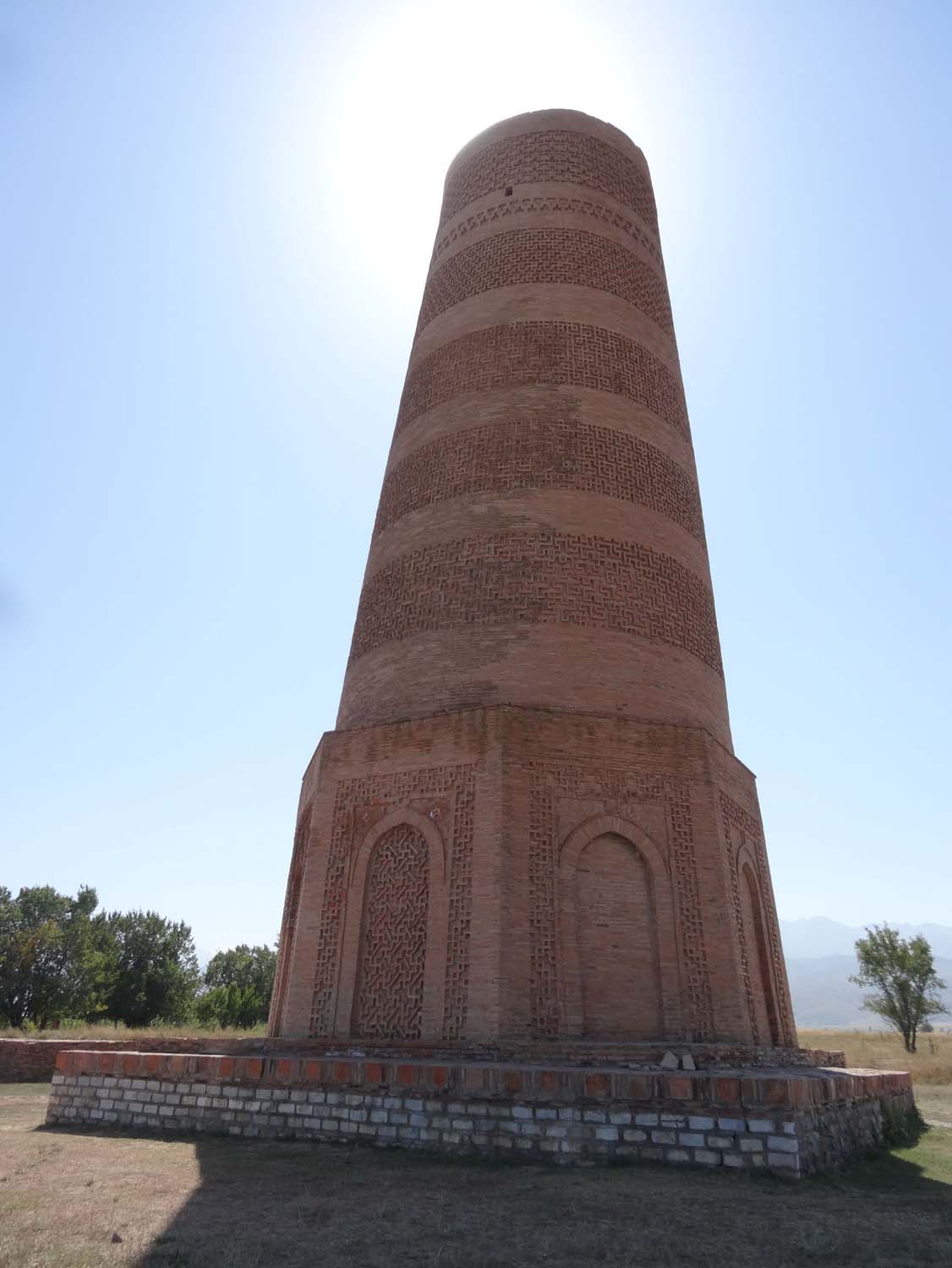 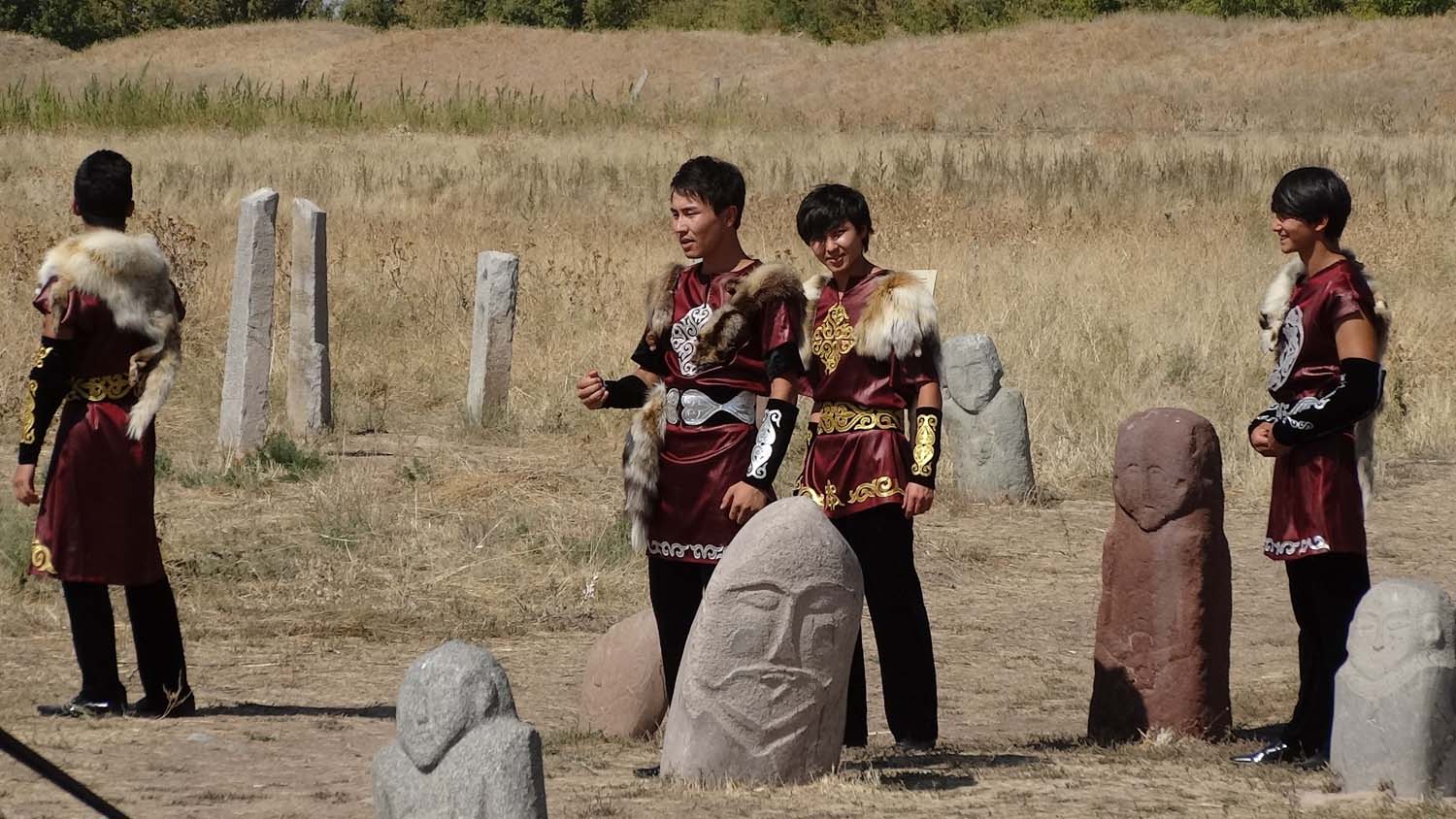 In Bishkek we had a few navigational issues before finally reaching our agreed rendez-vous point with Robert and Clary. They are 2 Dutchies traveling the world in their amazing, beautiful but massive 16-tonne truck. We had been in touch a few times over the past months and it was great meeting them even though it was only for one evening. Who knows, our paths may cross again one day. 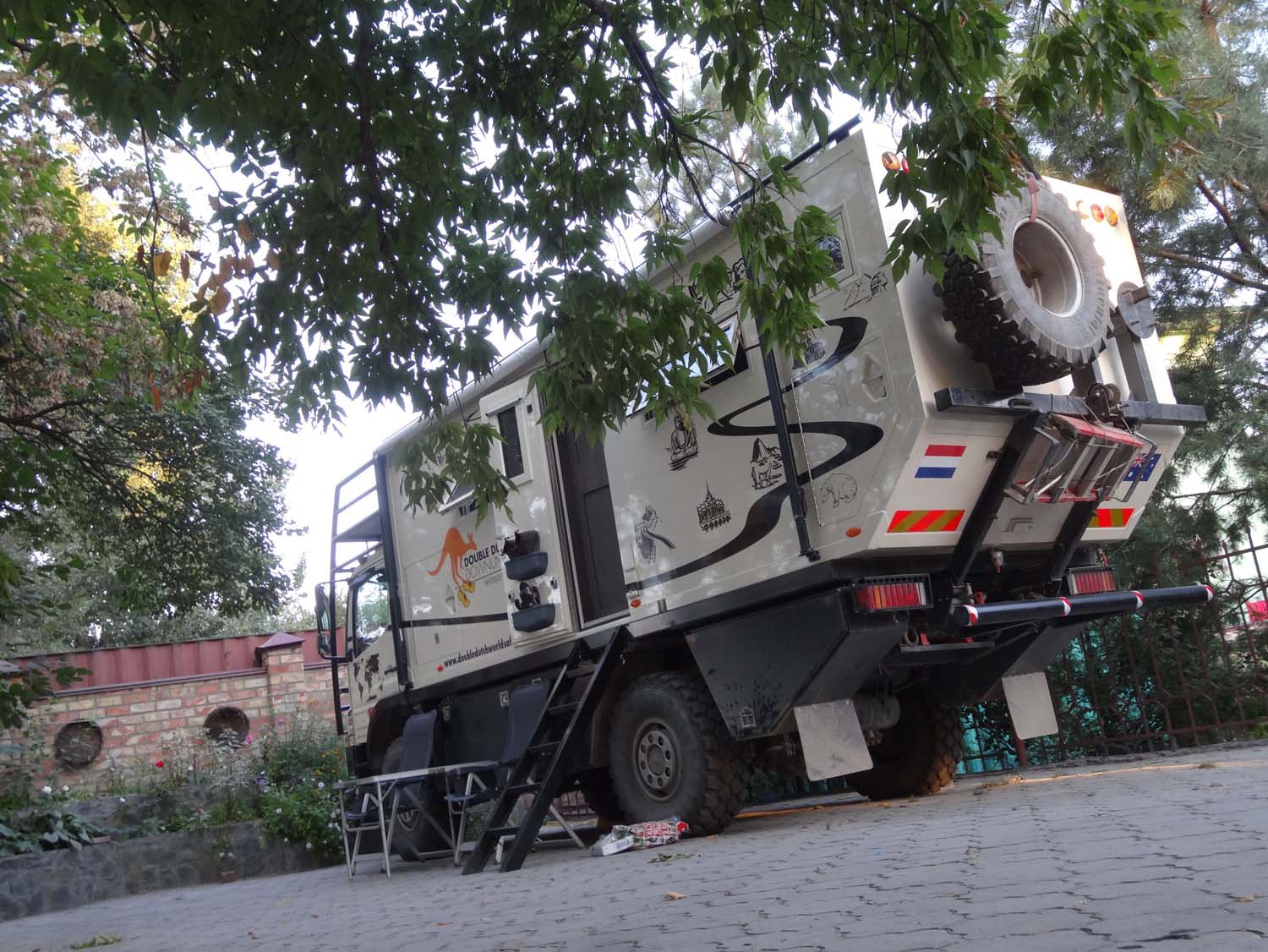 the truck from Robert & Clary, massive but amazing on the inside