Jon came home one day with a list of all the international flights leaving Brissy airport… “Where shall we go?” was the question. He had taken the 3 days off after Easter and Anzac Day which meant he had an eleven-day break! Woohoo!

We went through all the options, read up on some destinations not too far away from Brisbane and decided on Vanuatu. Surely with 82 islands there were going to be some islands that we could find some fun stuff to do?

Turns out there was plenty to do, too much in fact to see and do in 10 days. We did manage to squeeze in quite a bit, but I think we could easily go back and spend some more time on a few of the islands to check out the things we didn’t have time for.

Jon’s first few hours of the holiday were quite stressful as the flight was delayed by about 12 hours, nearly causing us to miss the connecting flight to Pentecoste where we were going to the land diving ceremony. We made it, with just a few minutes spare, after walking from the international terminal to the domestic terminal about 200m away and strolling onto the tarmac runway to get to our tiny plane (6 seater including pilot).

The land diving ceremony was amazing, quite touristy, but still amazing to watch. 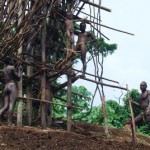 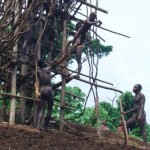 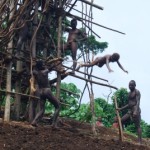 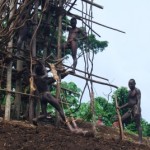 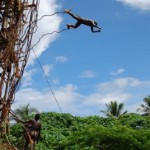 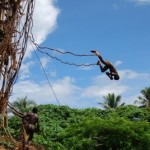 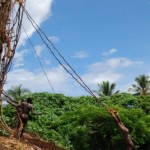 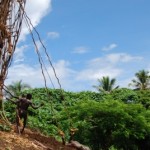 This is where they got the idea for bungee jumping. I don’t think many people would have taken up bungee jumping if the landing was like this…

After the land diving ceremony we flew to another island (Epi) for lunch and then hopped on a fishing boat to go snorkeling in Lamen Bay. We were lucky as I spotted a dugong already on the way to Lamen Bay and Jon and I were allowed to jump in. Two minutes later we found the dugong just resting on the sea floor! We swam with it for a while and then lost it, but on the way back to Epi we spotted another (?) dugong again and we hopped in for another swim – amazing! Made my day!! 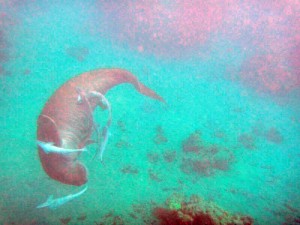 swimming with a playful dugong in Lamen Bay

Back on Efate we had a great dinner at a little local cafe and a drink at a bar on the bay. But as we were quite tired from missing most of a night’s sleep we went to bed shortly after.

On day 2 we flew to Espiritu Santo where we found a hotel for the next 5 days. On the way there our taxi driver saw a woman being harrassed by a local, we offered her a ride – he had tried to rape her! The machette marks were clearly visible on her cheek and in her neck… blood dripping out! She knew him and we dropped her off at the police station so they could go and pick him up…

The hotel was great and we enjoyed Espiritu Santo a lot. We went diving 4 times on the SS President Coolidge, saw the psychedellic lantern fish, the resident morray eel and basically did a lot of diving that normally with just Open Water you’re not allowed to do (dive inside a wreck, dive deeper than 18m – we went deeper than 40m… etc) Great fun! We also used the bikes for a long ride on the island to one of the blue holes, the biggest one, on the eastern side of the island (Matevulu), took the kayaks from the hotel up the local river until too many rapids in quick succession forced us to turn around (very beautiful!) and visited some kava bars. 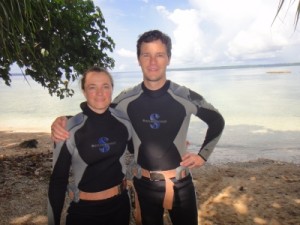 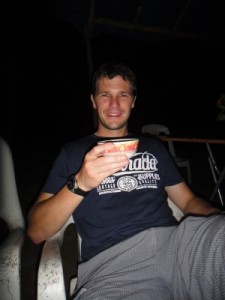 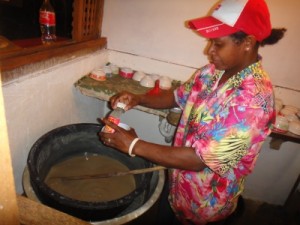 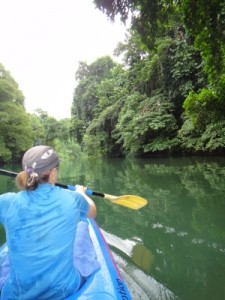 going for a paddle

Oh that stuff is disgusting! I drank 7 shells the first night and definitely wasn’t in the mood for another session the next day when Lars and Viktoria joined us. The last day on Santo we ‘did’ the Millenium Cave which was a great little adventure hiking through 2 local villages and then through a long cave with a creek in it and lots and lots of bats (and bat poo!). After that you float down the canyon and scramble over and under some massive boulders before you hike up and out again to return to the village. Great day of fun! 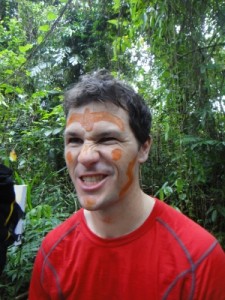 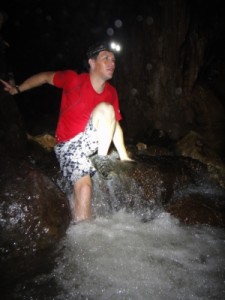 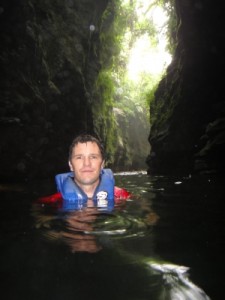 great fun for a day out 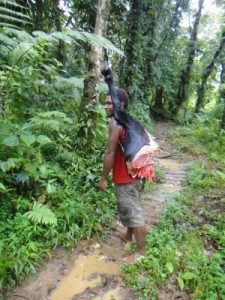 carrying the meat to a party

After Santo we hopped on the plane again, back to Port Villa (on Efate) where we basically stayed at the airport for another flight on to Tanna – yet another island. 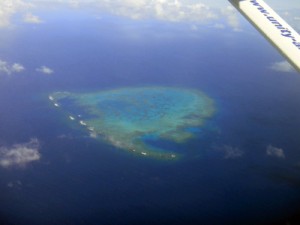 one of Vanuatu’s islands from the air

On Tanna we went to the resort, had lunch and went straight into the back of a ute to drive the 2.5hrs to Mt Yasur, one of the world’s most active volcanoes where you can see the lava being spit into the air at regular (ish) intervals. The drive there was great fun, especially the last section where we crossed the river onto the ash plains – driving straight up the volcano (we didn’t get very far) and then around the back up this very rugged 4WD track which takes you almost straight to the top. This means easy access for the more obese people on the planet too I guess… 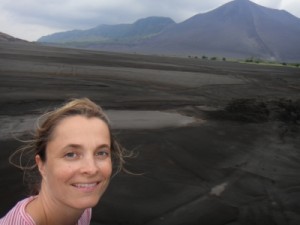 first view of Mt Yasur, the active volcano we are about to climb

We perservered and a few minutes later, a bit higher up the ridge, it cleared up at times to show this amazing glow from the crater (only a 100m or so away!). When the volcano rumbles for the first time when you’re standing there on top your heart definitely skips a few beats!!! OMG, that is so intense and scary! In the hour we spent on top I never got used to the rumbles, but was fascinated by the fountains of molten lava being spit into the air. Breathing (and seeing) was difficult when the sulphur clouds came down, but it was still hard to leave. At this point it was completely dark. 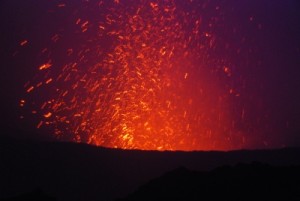 We heard – as we were hiking down – that the volcano is currently at level 3 and (we found out later) you shouldn’t get to the top when it is at level 3!! One lady who went the day before, when they couldn’t get across the river due to lots of rain fall, said she saw the lava at one point coming down the hill! Hmmm, well at least we survived!

The ride back was a bit more sedate as we sat inside the cabin. The next afternoon we were meant to fly out, but a massive electrical storm appeared around lunch time which meant our plane had to turn around and we had to stay another night. This time we stayed at a slightly posher resort and enjoyed a meal with the rest of the people who were forced to stay on a bit longer. Air Vanuatu was going to pick up the bill for the night – great.

This meant we didn’t have much time once we finally made it back to Vila so we decided to stay at Hideaway Island, do a bit of snorkeling (at the only underwater mail box AND post office in the world) and kayaking and spend the last morning of our stay abseiling down the Mele waterfall. 50m in 2 stages. The waterfall is really beautiful and the abseil fun although ‘too safe’. 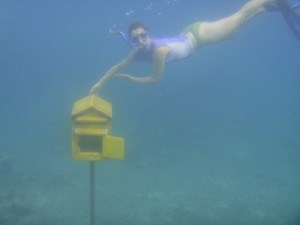 Vanuatu has the world’s only underwater post office and mailbox 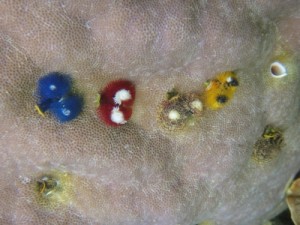 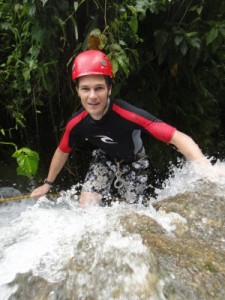 Jon on top of Mele Falls 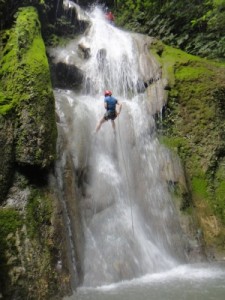 After the abseil we got changed and then they dropped us off straight at the airport – just in time for our flight back. Our last Vatu (and a few ozzie dollars) were spend buying the duty free alcohol (I think this is the first time I have been somewhere where duty free alcohol actually means it is cheaper!).

Great holiday, very expensive (all ozzie prices for food, accommodation, drinks and tours), but definitely worth it! Would love to go back and explore some more…

This is the map of (the main islands of) Vanuatu and our flights: 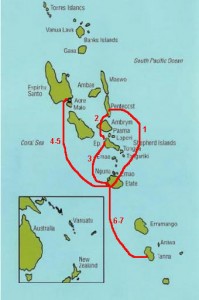