Ulaanbaatar (UB) is not a pretty city, especially not coming in from the south, driving past 2 power stations right in the middle of town. But once setup in the centre of town where Ian (our saving angel) lives, we enjoy exploring UB on foot and finding hidden stores and markets in interesting places. 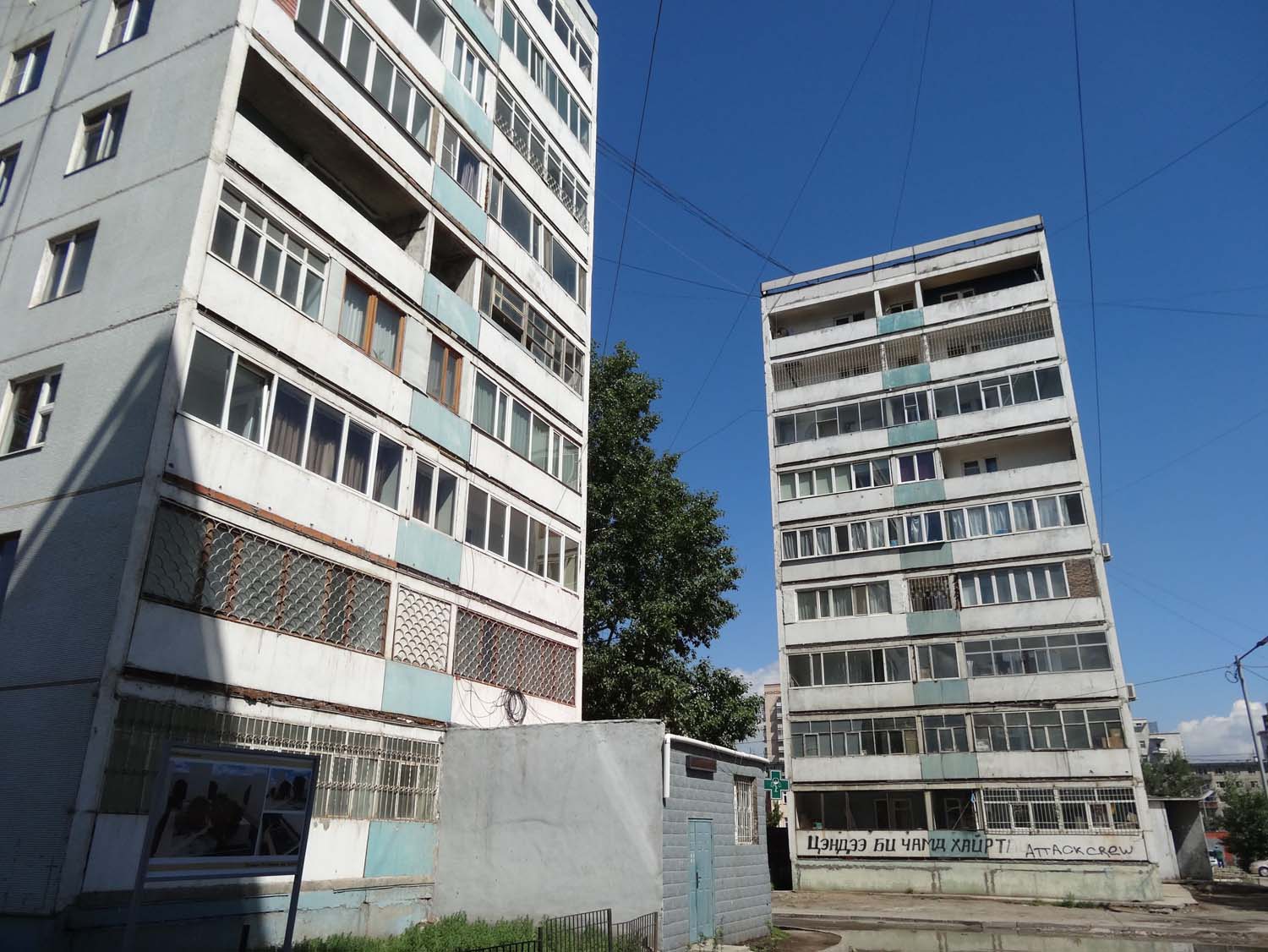 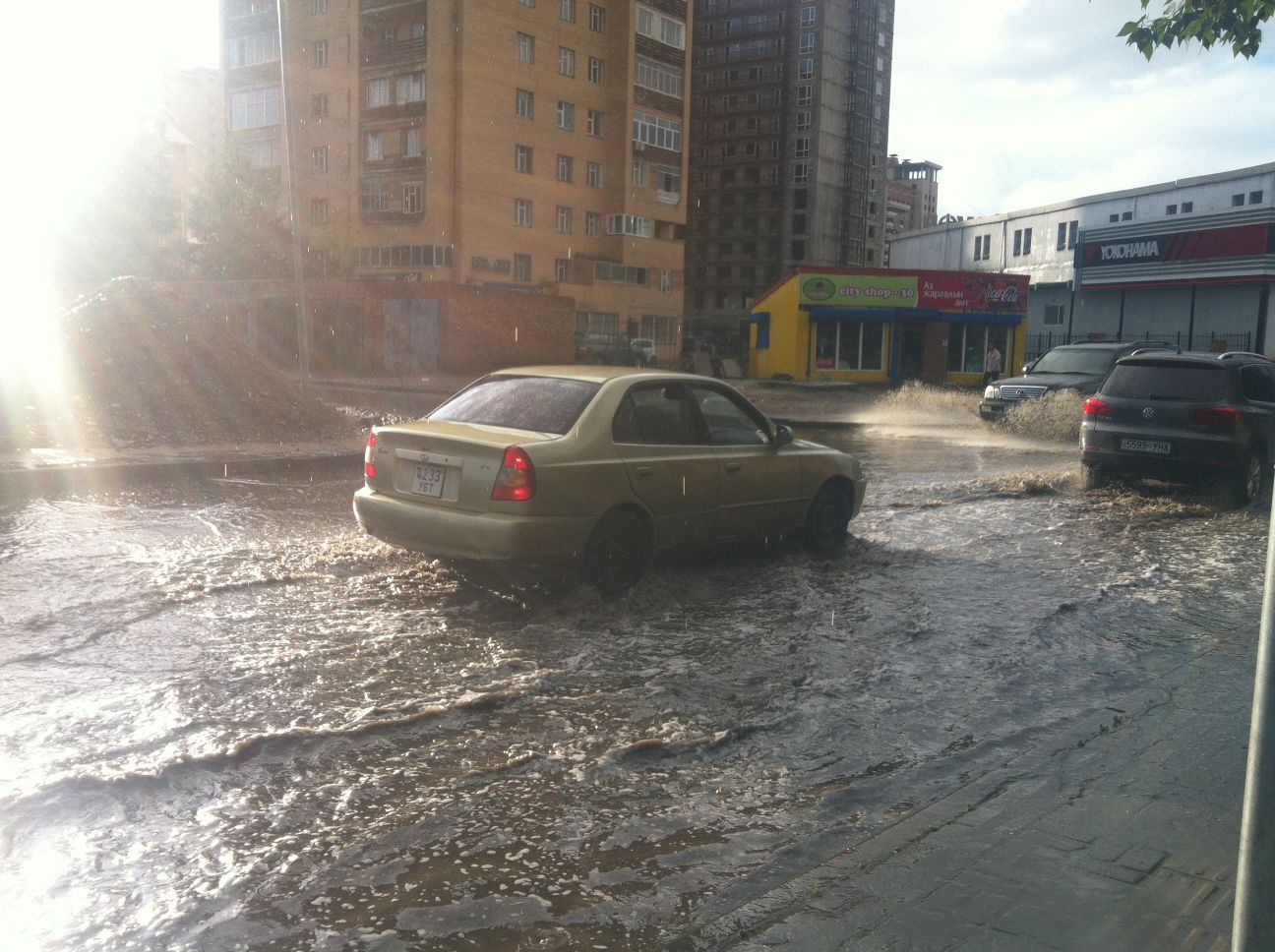 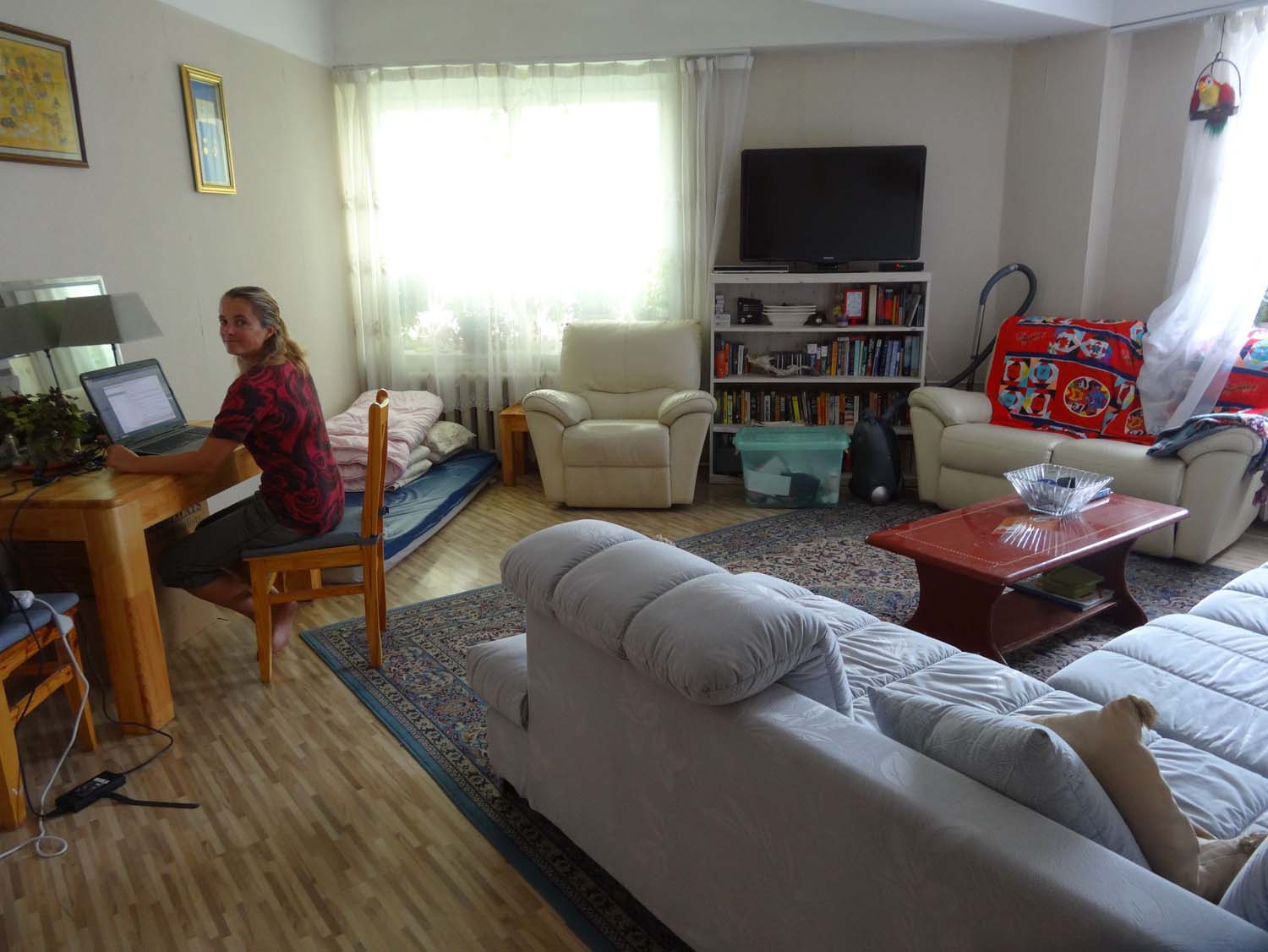 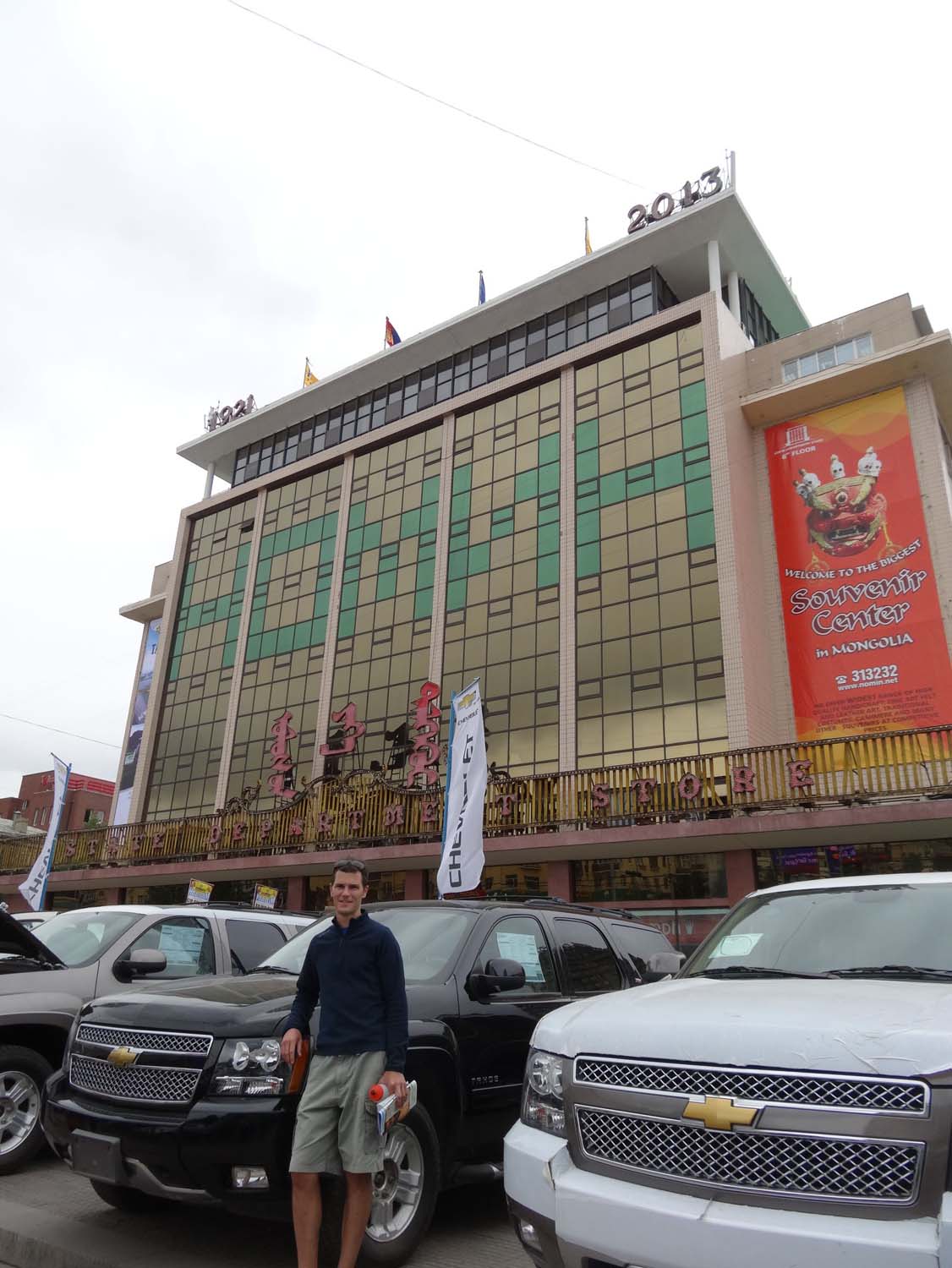 the State Department Store, now you can buy anything you want here

People drive extremely aggressively and because we are so central we decide to leave the bikes on the car. Traffic is diabolical anyway, driving from Bojangles (Ian’s restaurant) to the black market took us one hour – it’s 2 km!! We could have walked there faster if we had known… They even have regulations where cars with licence plates ending in 1 and 6 cannot drive on Mondays, 2 and 7 have to stay immobile on Tuesday etc… it doesn’t seem to help much with the city centre pretty much gridlocked for most of the day.

Another thing we noticed here is that cars are 50-50 left hand drive and right hand drive. They drive on the right hand side of the road so you’d expect most steering wheels on the left, but anything goes here. They also sell anything from anywhere. Near Ian’s place is a massive secondhand car market, selling everything from American sedans (we saw plates from Louisiana and South Carolina), 4WDs and fast cars to English campervans (UK licence plates still on them) and caravans. 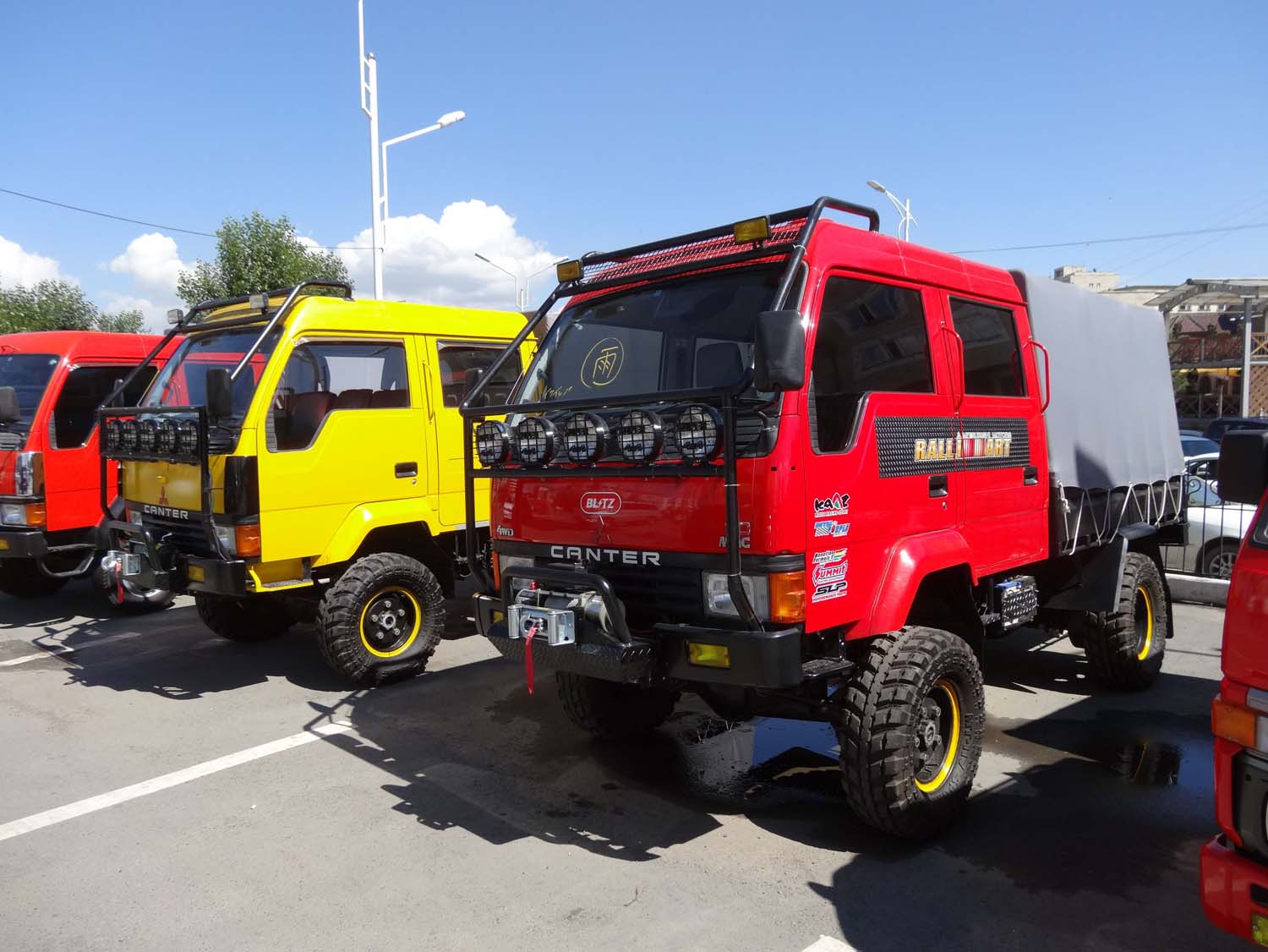 some of the trucks for sale, they also had caravans and campervans from the UK and cars from the US for sale

The black market is another example where you can buy anything you need. From the traditional deels (the coats both men and women wear) to food, bicycles, car parts, furniture, shoes, perfumes, sunnies and anything else you can think of. 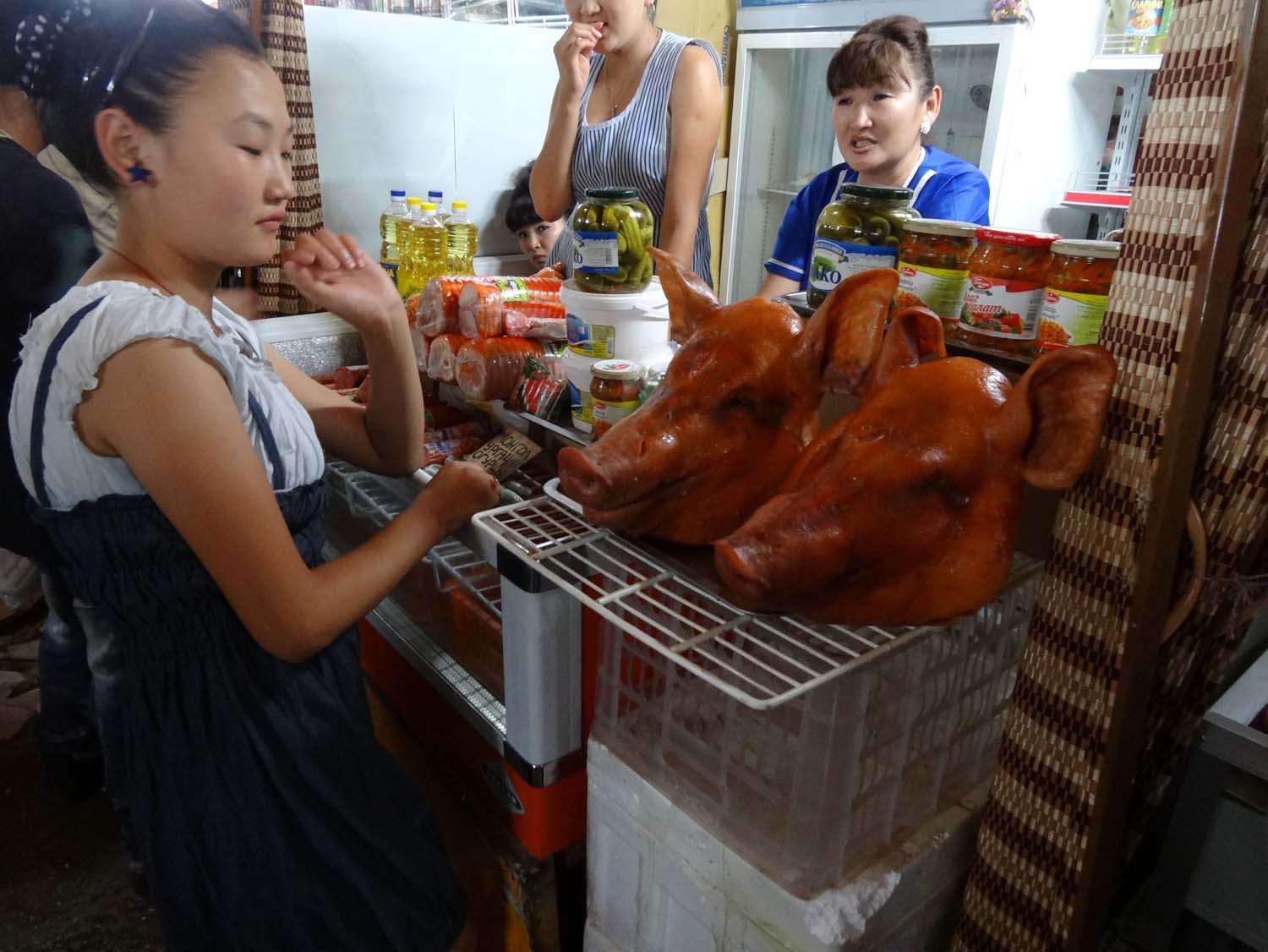 pig’s head anyone? they sell everything at this black market in UB 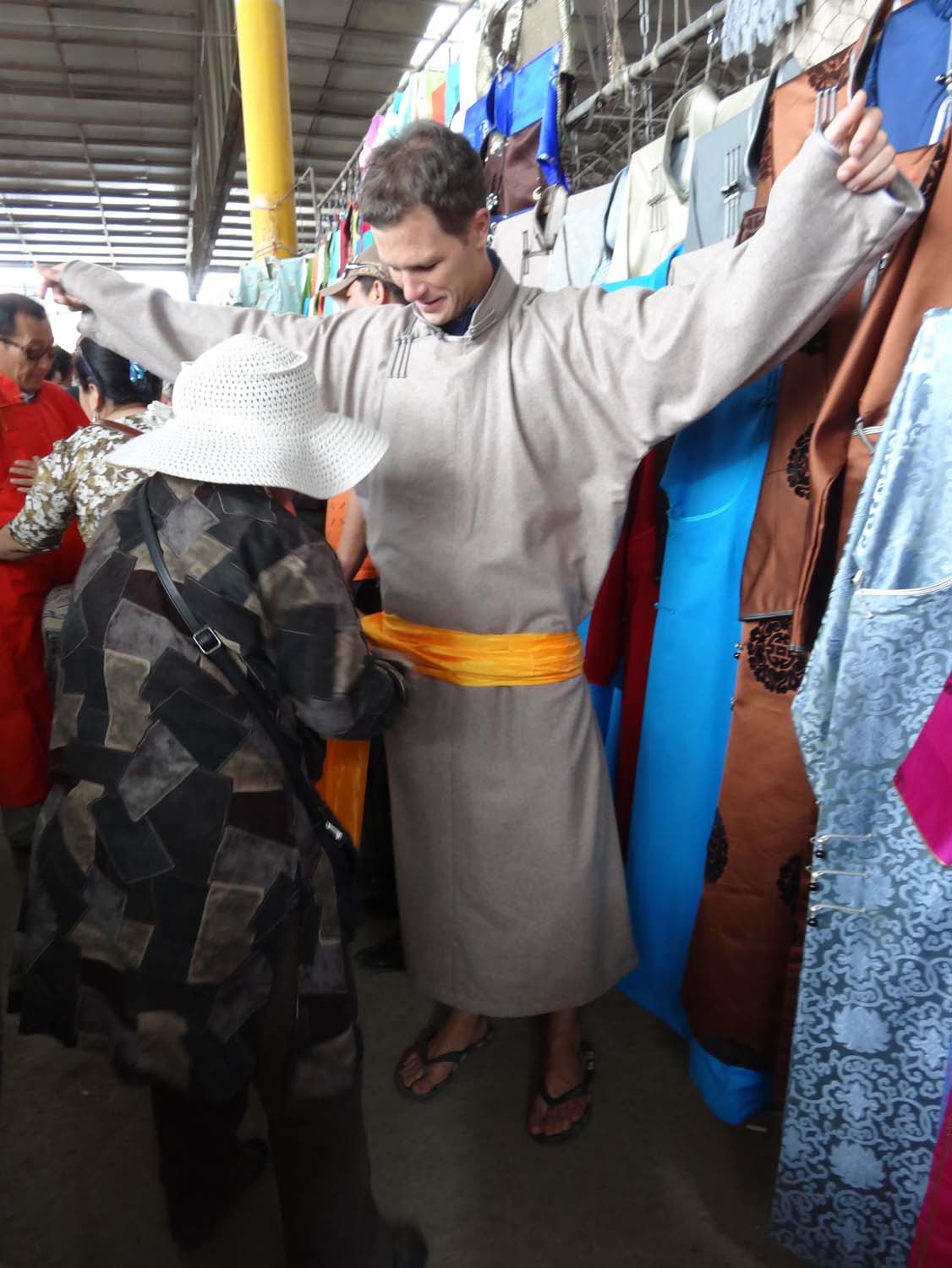 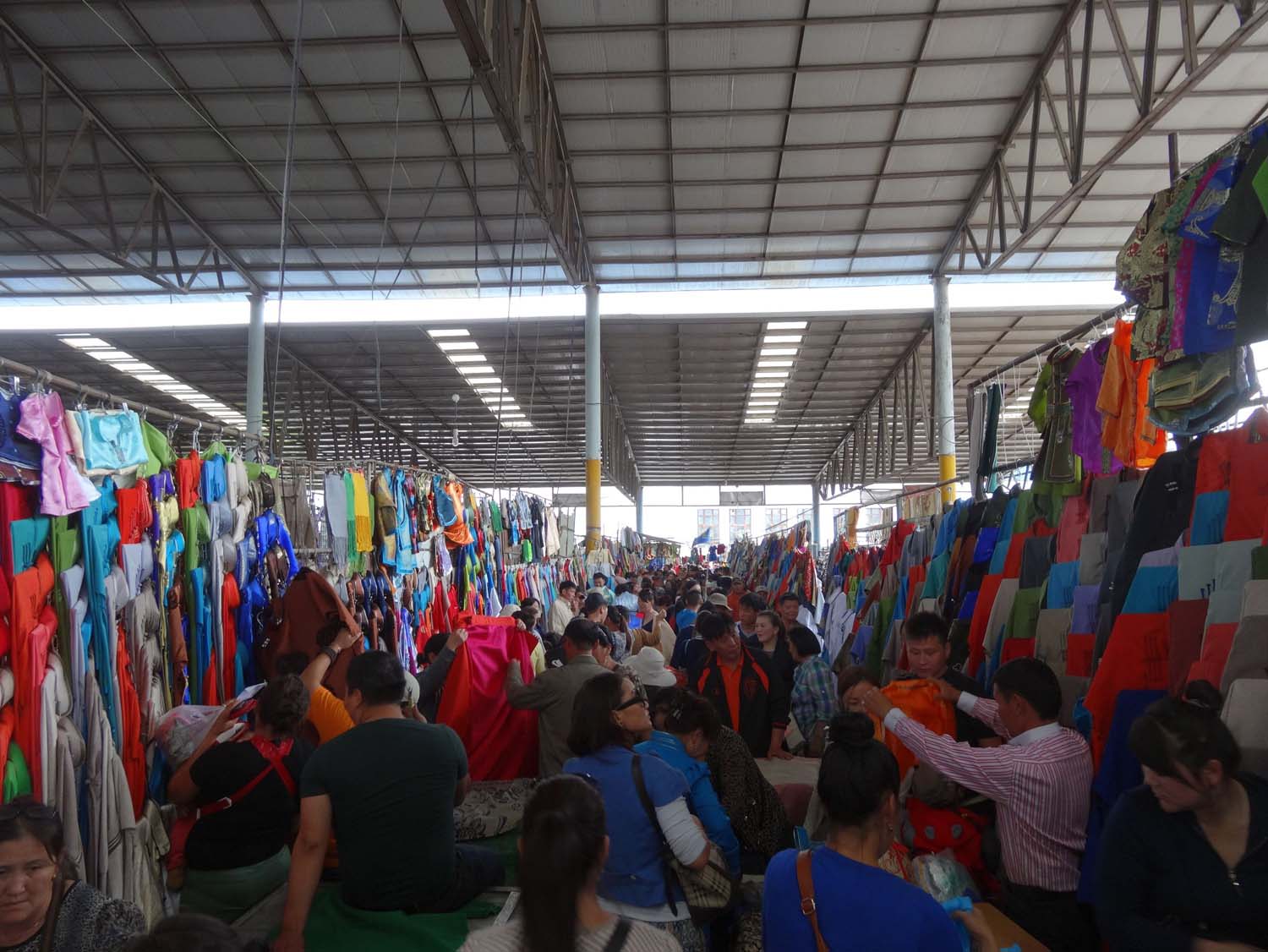 section with traditional dress at the black market 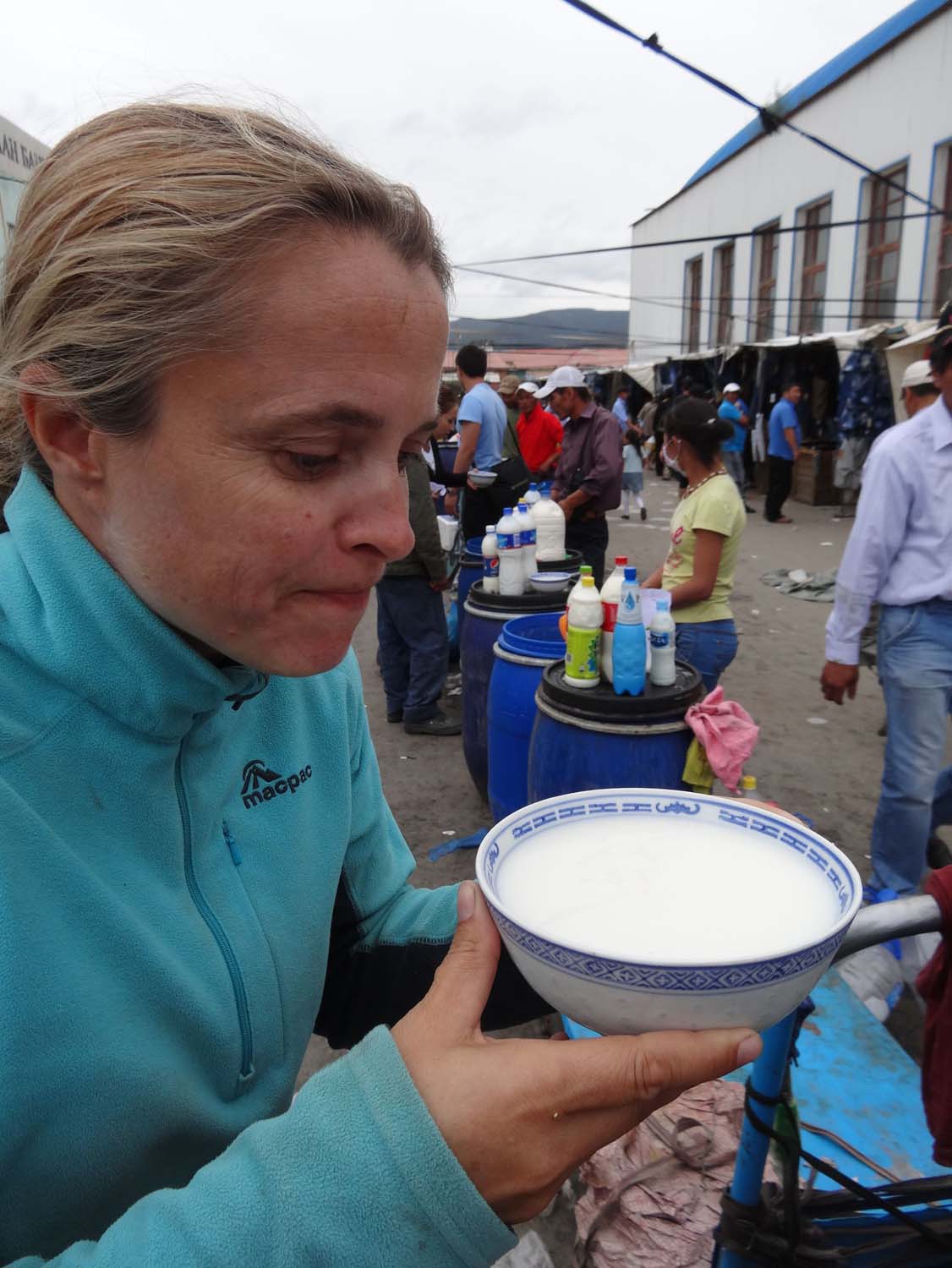 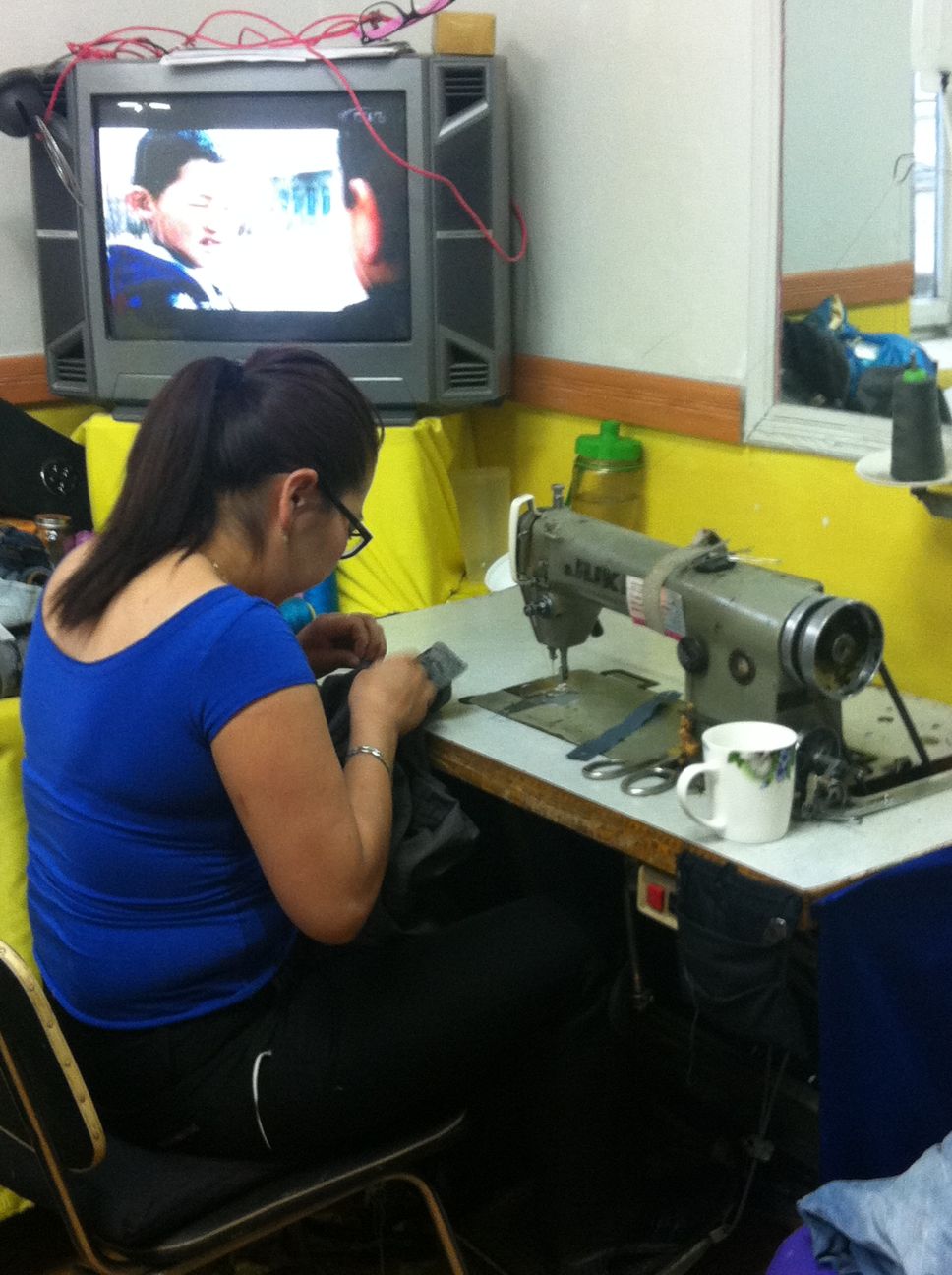 getting my trousers fixed

Ian (the brother of Andy, a good friend of Marjolein) lives in between Wagner Asia (the Land Rover garage), Bojangles (his restaurant) and Sukhbaatar Square (the main town square). All a 5 minute walk from his place – perfect! Jon would often spend a few hours at the garage whilst I would ‘work’ in either Bojangles or at home, meeting up for lunches and / or dinners with Ian. 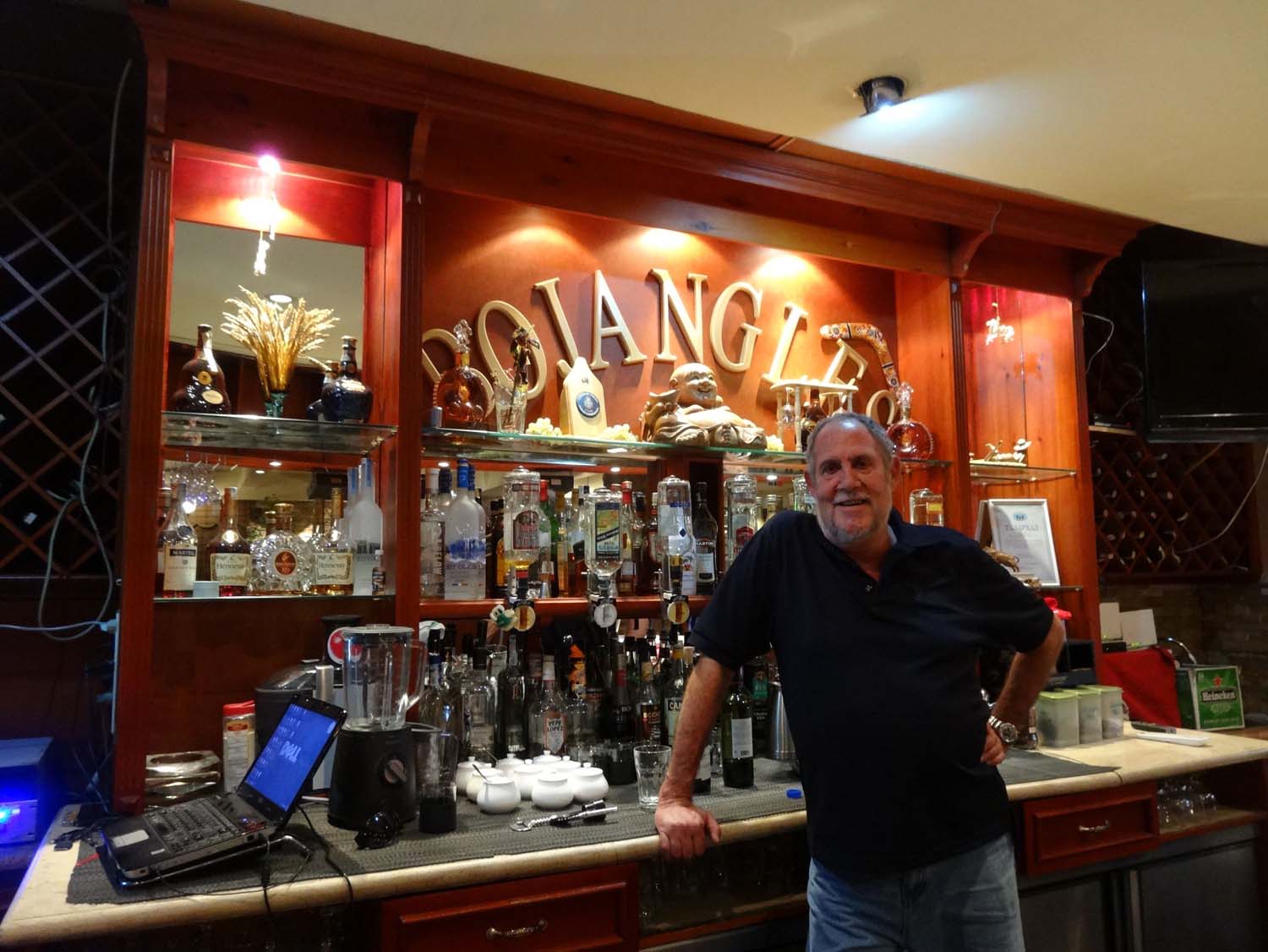 Ian (our saving angel) behind the bar in Bojangles 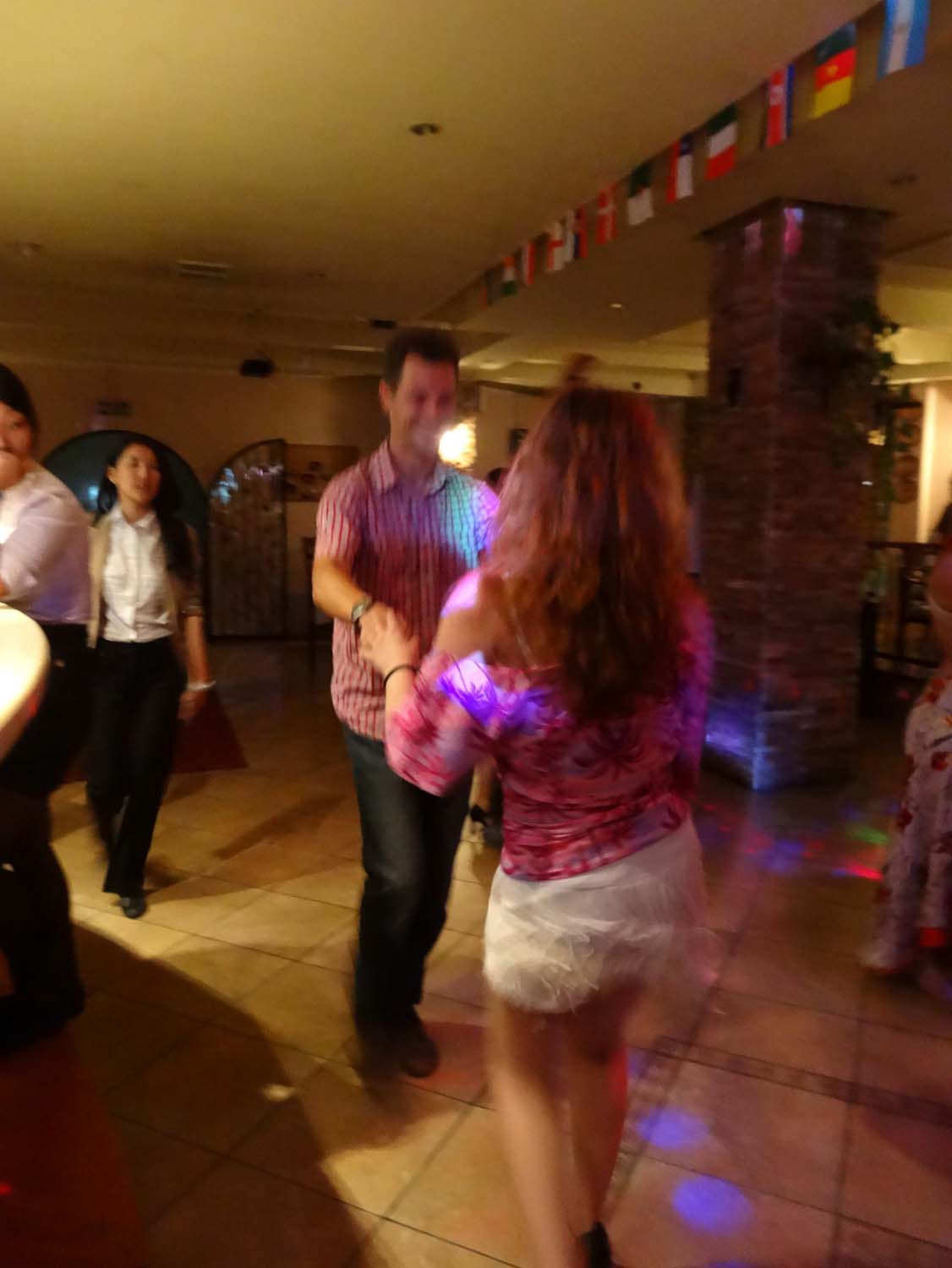 We had dinner once in Khaan Ger where Altain Orgil played traditional music, at The Mongolian where another traditional style band played and they have a lot of beautiful Mongolian artifacts displayed including a full-size ger, at Bojangles of course and we discovered UB has a thriving vegan scene! They have about 9 restaurants and we tried 3 – the Vegan Lounge definitely being the best (food and atmosphere). I couldn’t believe I had never heard of Loving Hut before which seems to be all over the world! I’ll have to keep my eyes open for more of those. 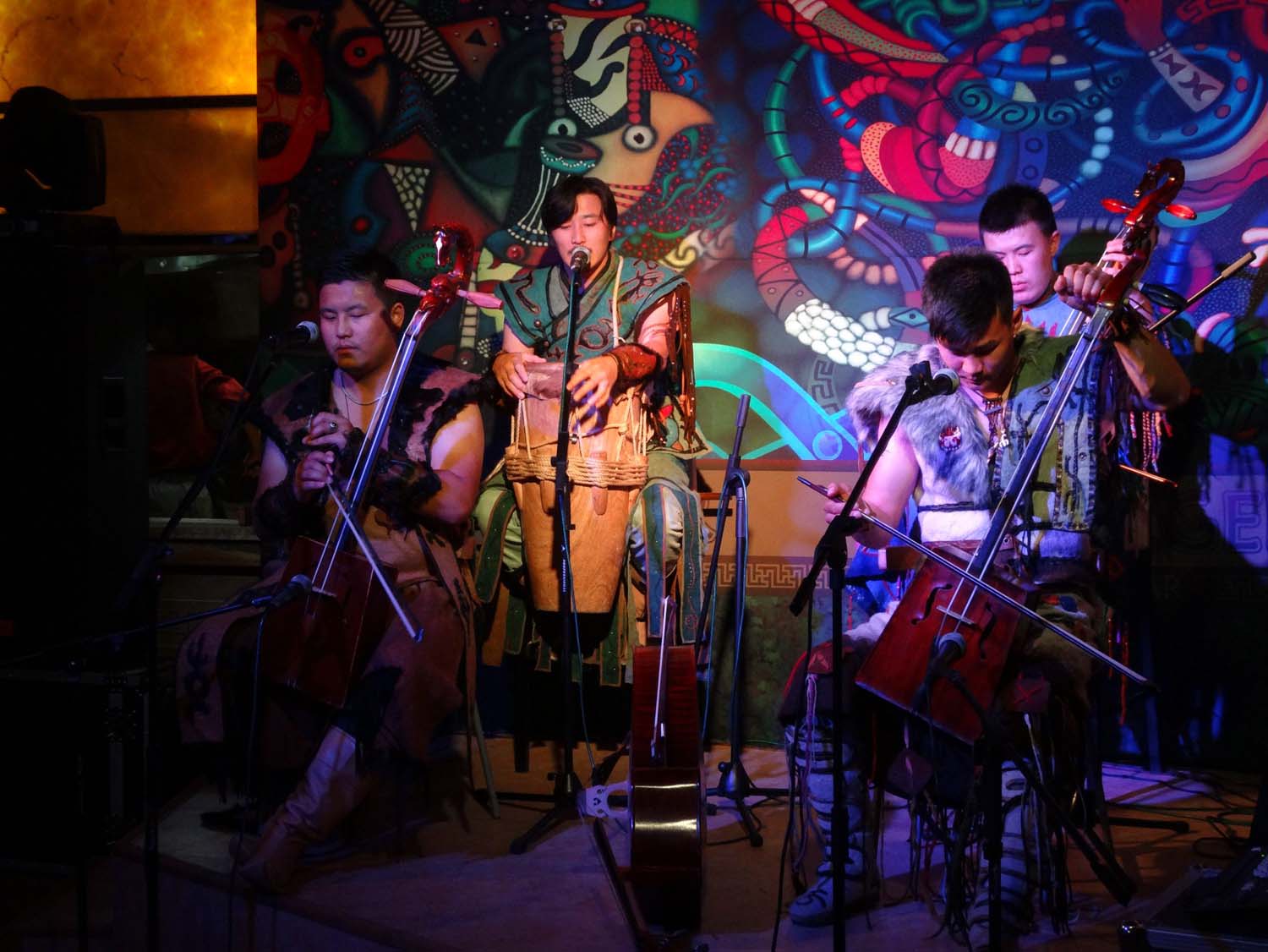 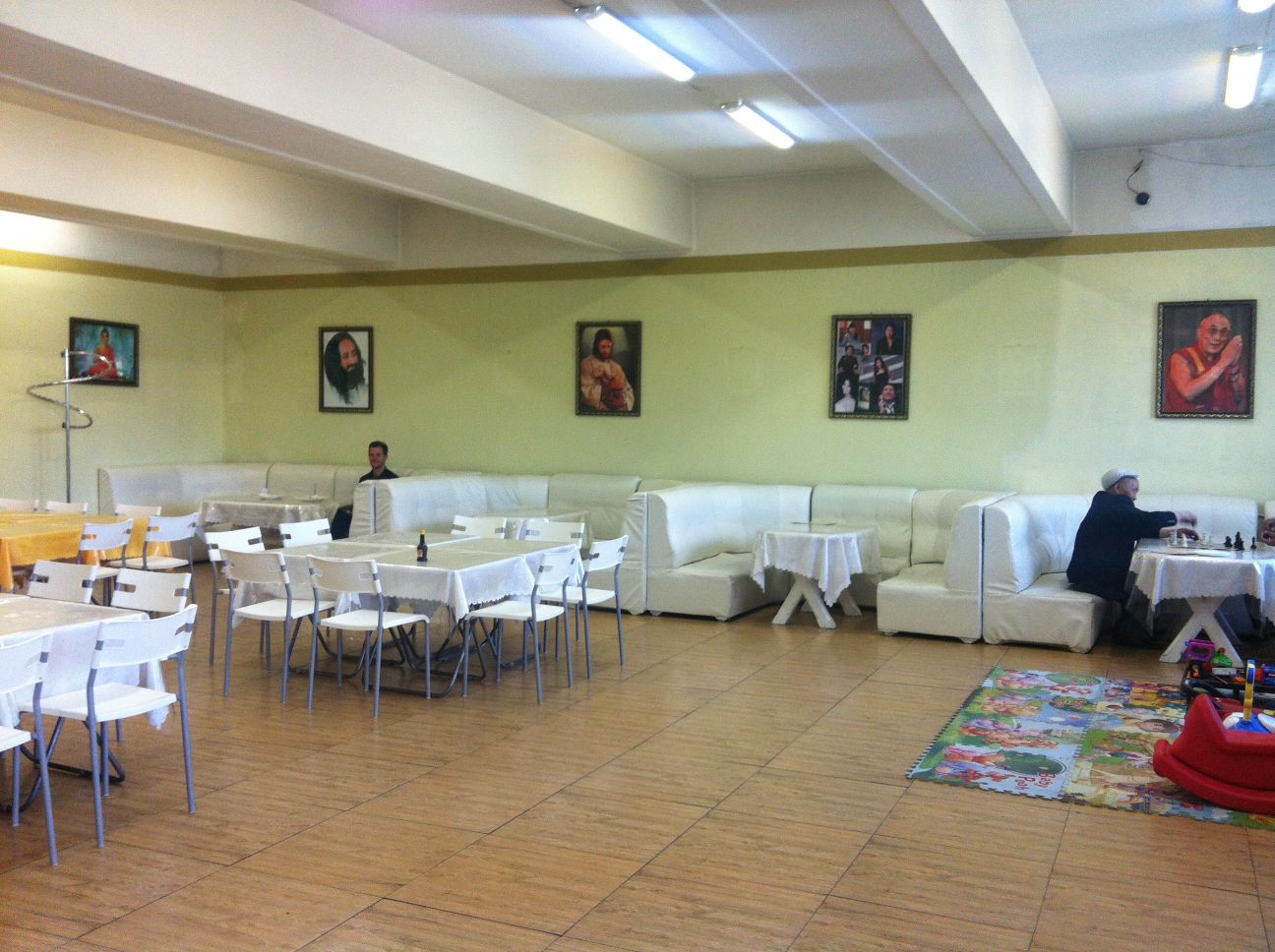 One of the Loving Hut vegan restaurants – Vegan Lounge was a lot better!

One night we also caught up with most of the China crew who were staying at the Oasis. We were quite disappointed with the Oasis. It was great catching up with everybody and meeting some new overlanders – especially those coming from the other side (Europe) as we can ask them lots of questions about the countries we are still going through. But paying $23 for 2 square meters of parking, right on top of the next car or truck and having to eat and drink at the Oasis restaurant all the time (where the food was pretty poor considering a German / Austrian couple are running it). And on top of that you can’t actually use your car to drive anywhere in the city as you are packed in. If you want to move, everybody next to you has to move out of the way first! Oasis is also a few km out of town, so a bit difficult to explore the town from there on foot. 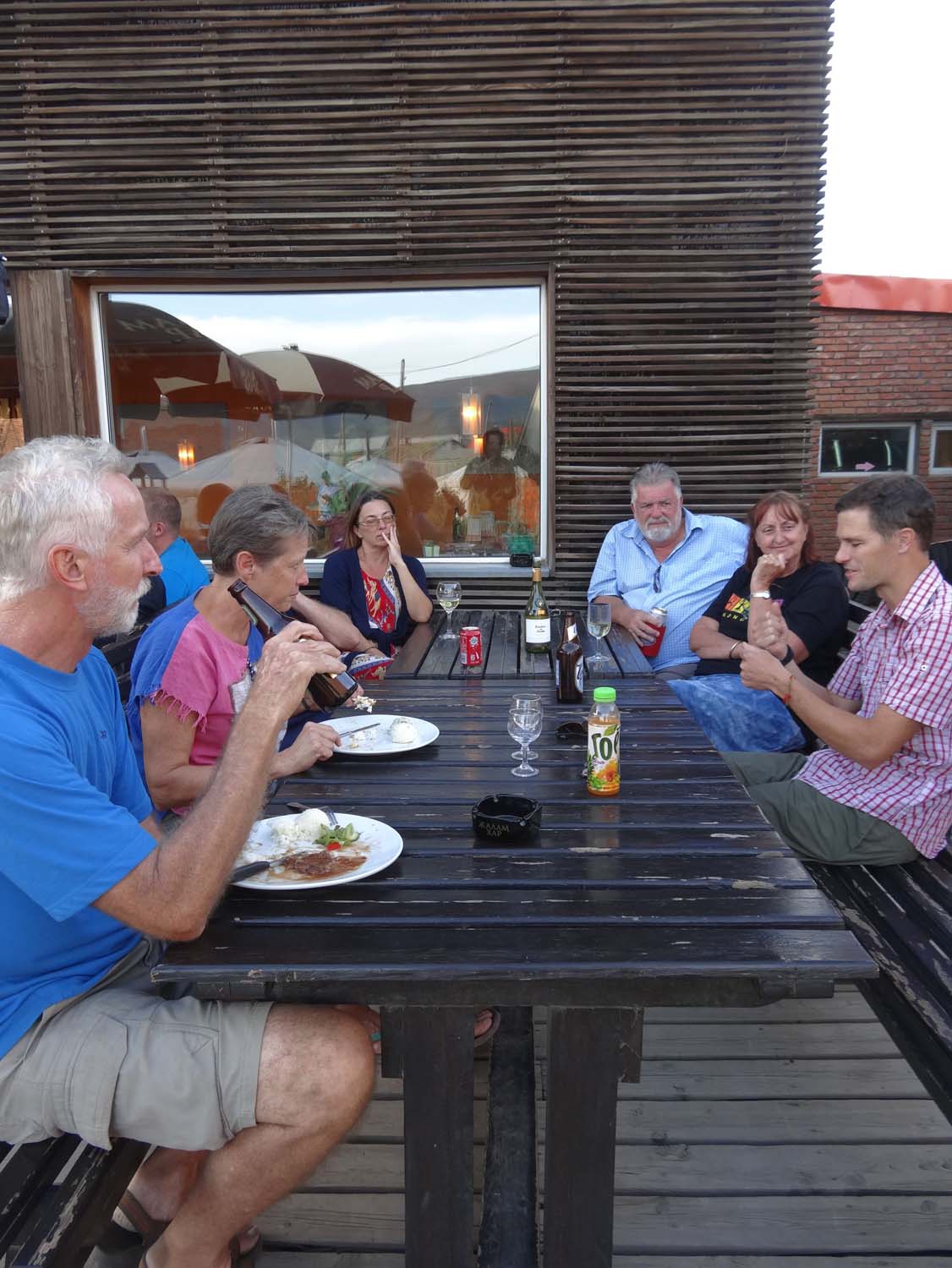 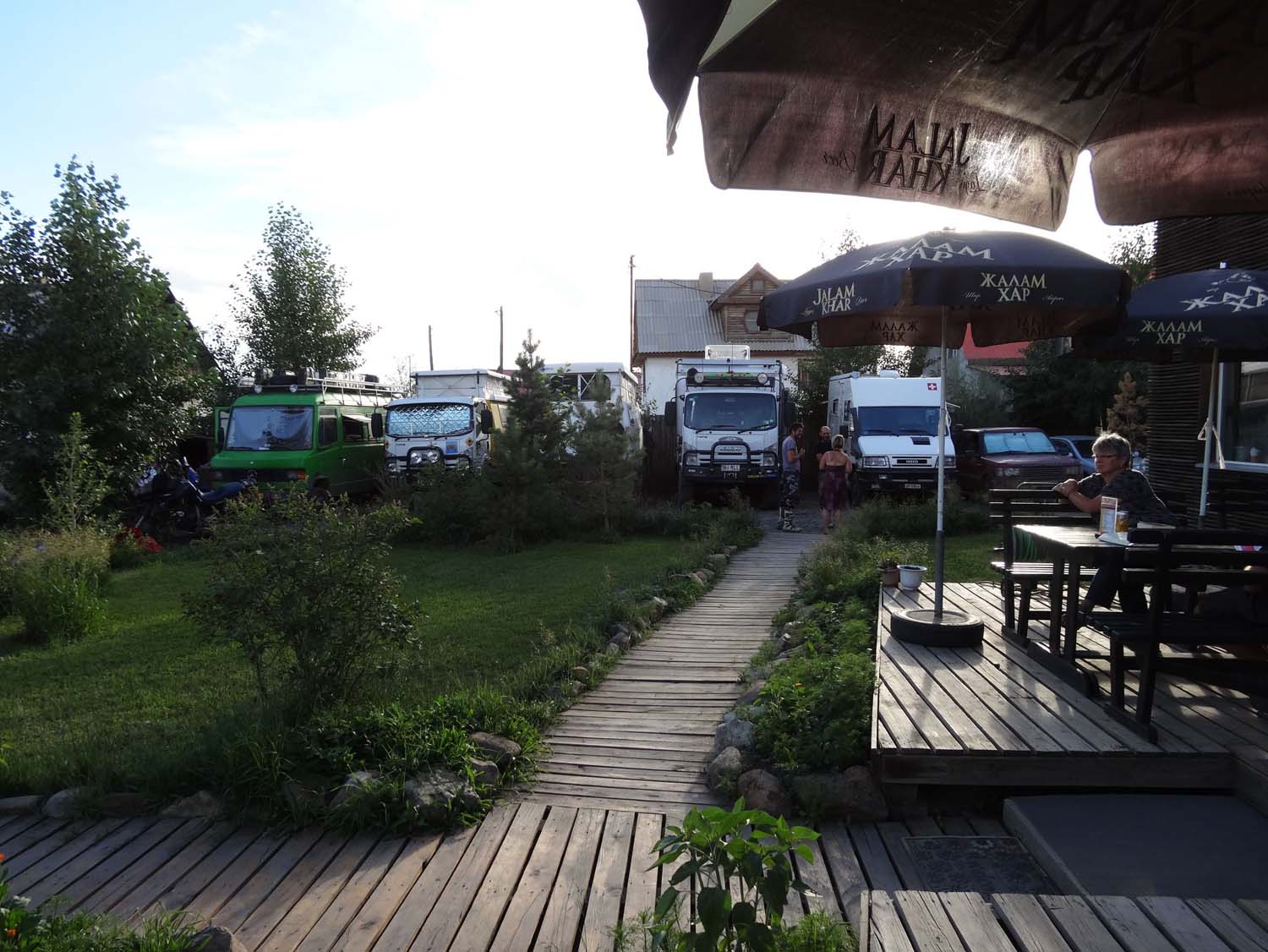 If one car wants to go anywhere, all have to move

I’m also happy (more food talk) as we have found lots of lovely breads to choose from and cheese! Jon is less happy as we haven’t found muesli yet. We can find all sorts of boxed cereals but no muesli – time to crack open the reserve bag from Australia?

It wasn’t just work, shopping and hanging out at the garage though. We made sure we took in some cultural stuff too. We spent a few hours in the National Museum which has a great display of steles, banners, traditional costumes and artifacts. And, purely coincidental, we watched the new president’s inaugural speech as for the first time it was held publicly on Sukhbaatar Square. I even managed to get onto Mongolian television as they interviewed me just before he came on stage. 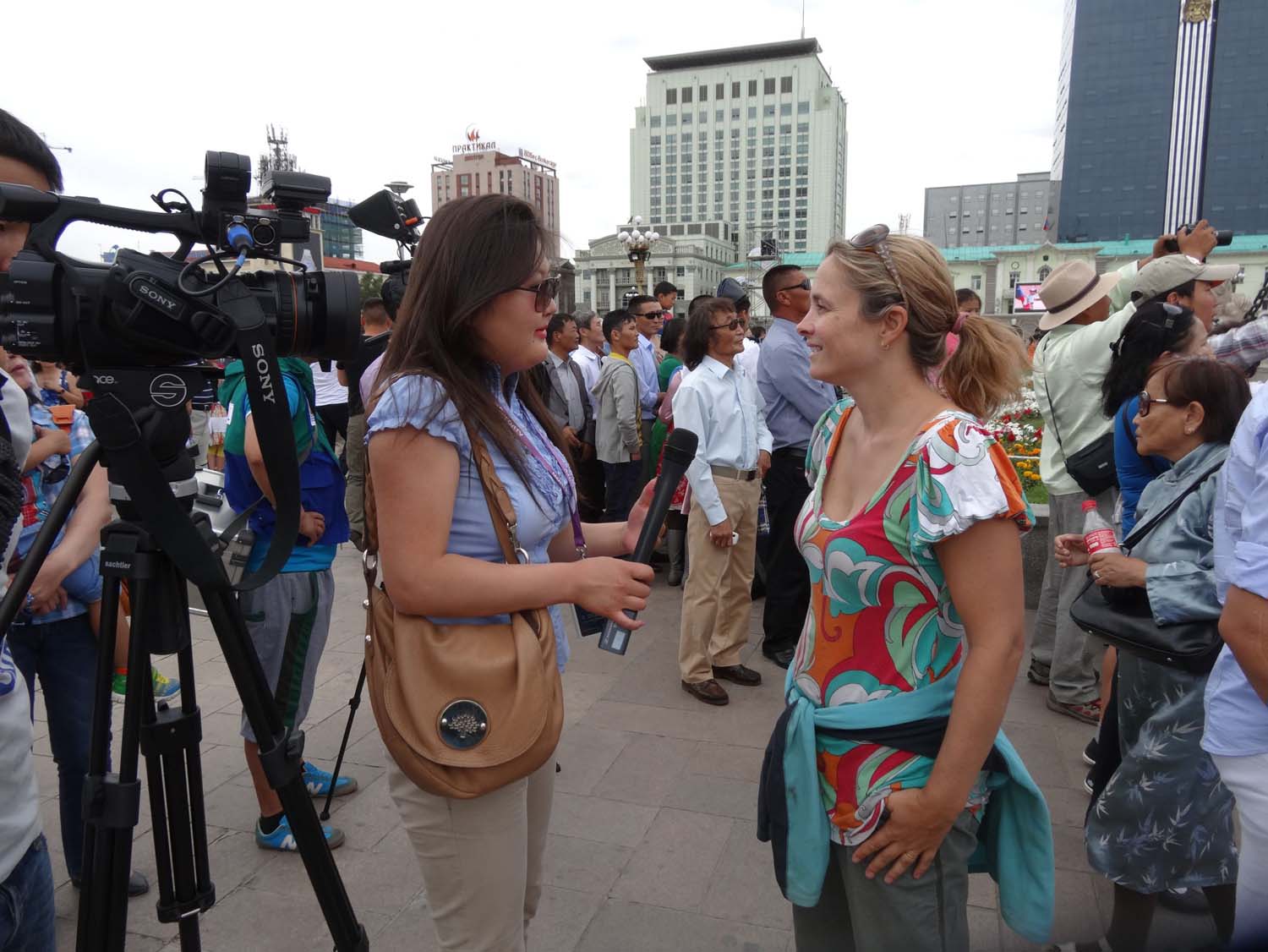 Jude being interviewed for Mongol TV 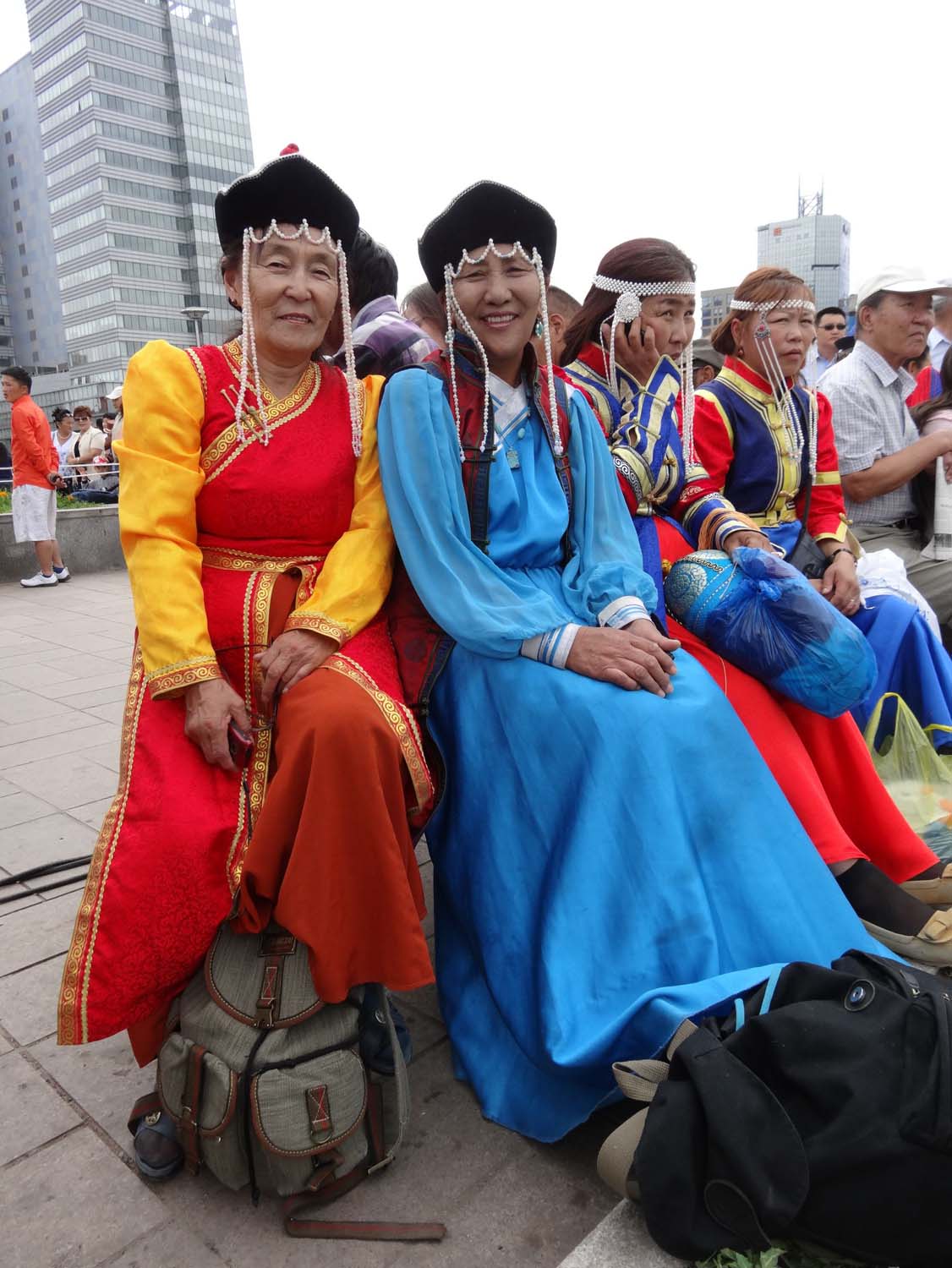 ladies wearing traditional dress in the main square of UB 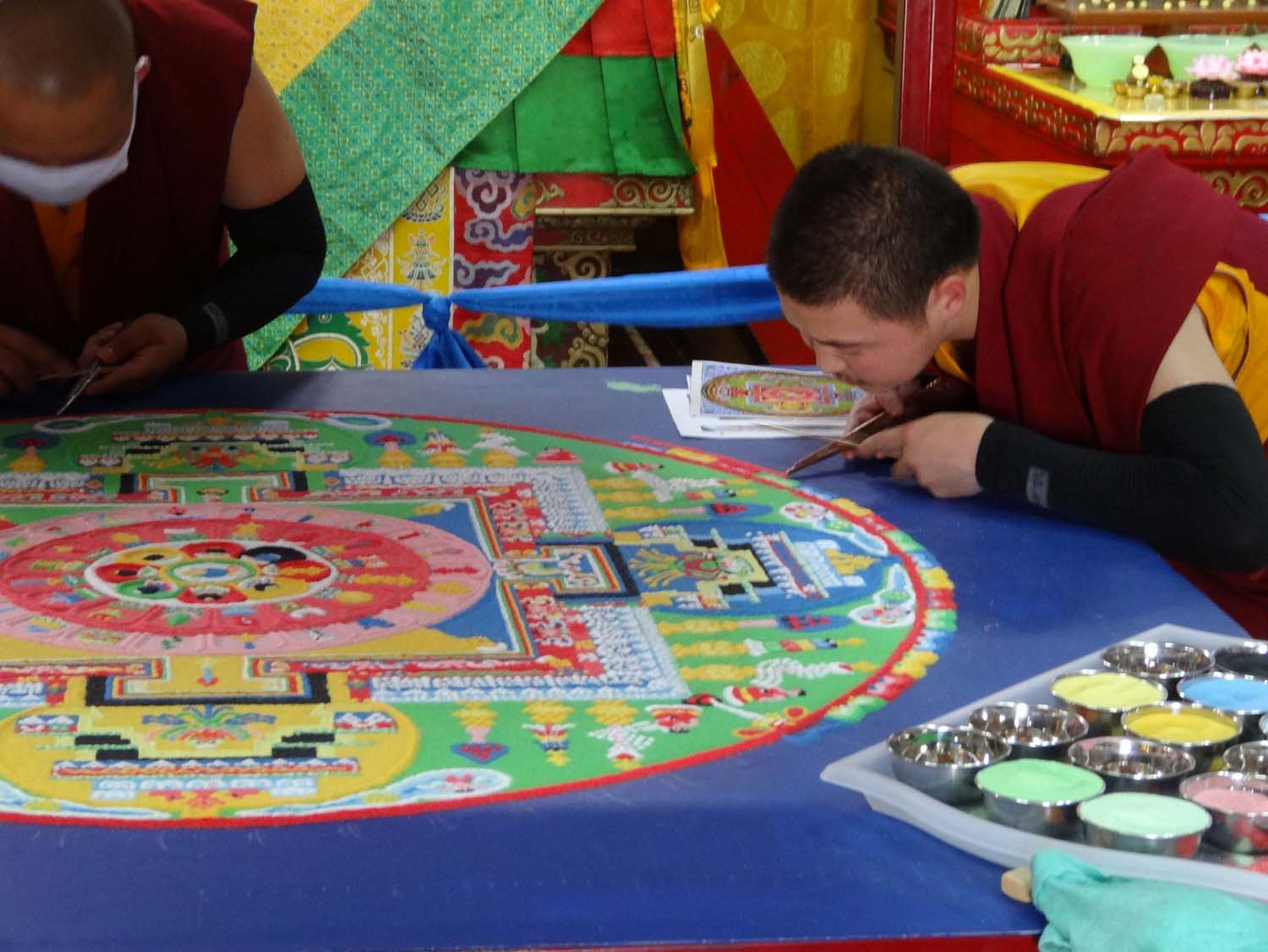 We also managed to get tickets for Beautiful Mongolia where the Morinkhur Ensemble played mostly Mongolian music with a mixture of traditional and ‘normal’ instruments in the State Concert Hall. We love the haunting sounds of the Mongolian throat and long singing and really enjoyed the rest of the night too. We were treated to some opera, jazz and typical Mongolian melodies. After we emerged from all this culture and exited onto Sukhbaatar Square, we were welcomed by Mongolia’s best DJs playing trance and techno to the backdrop of a massive lightshow on the statue of the big fat Sukhbaatar and the parliament building. Only in Mongolia…?! 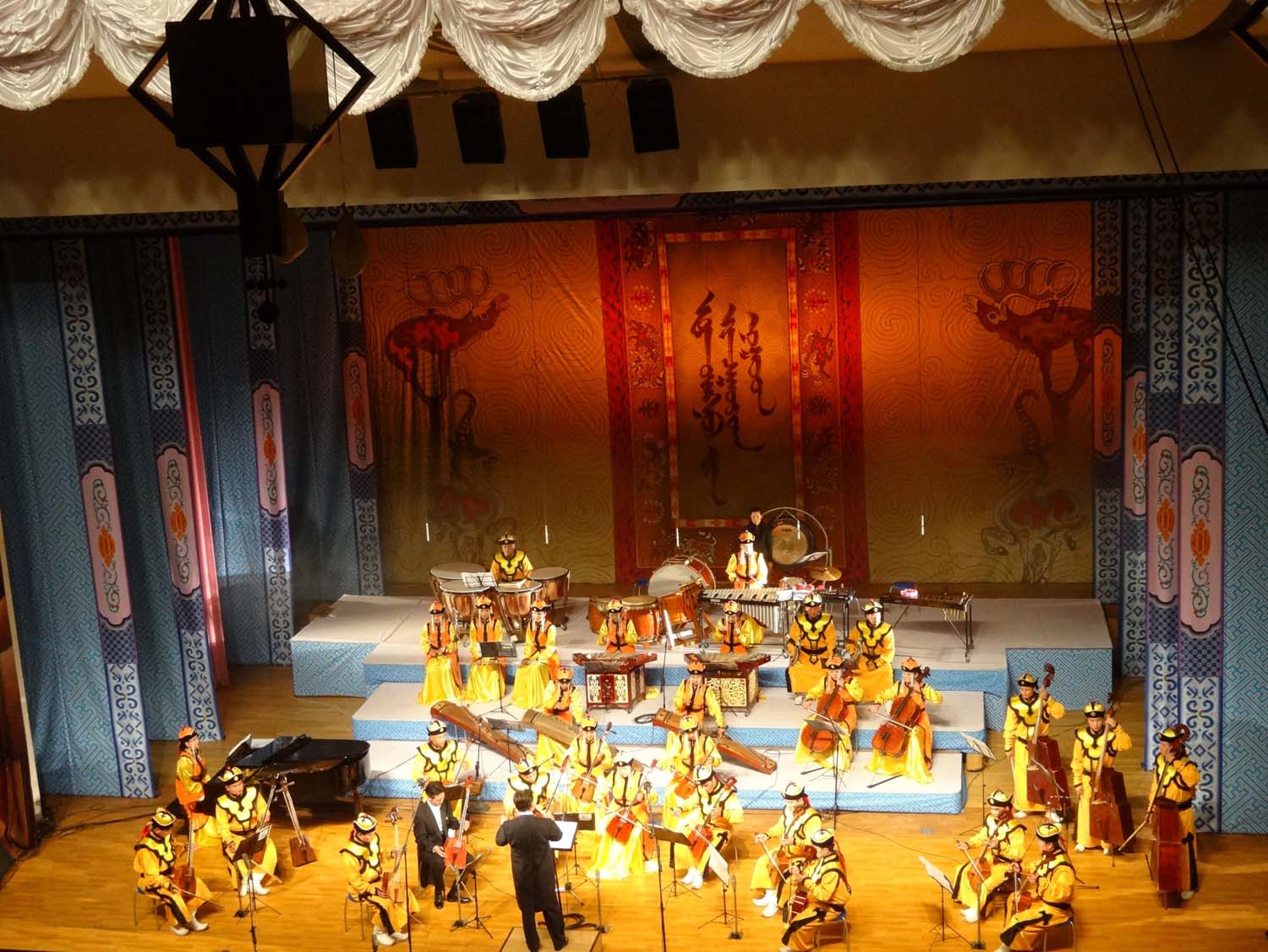 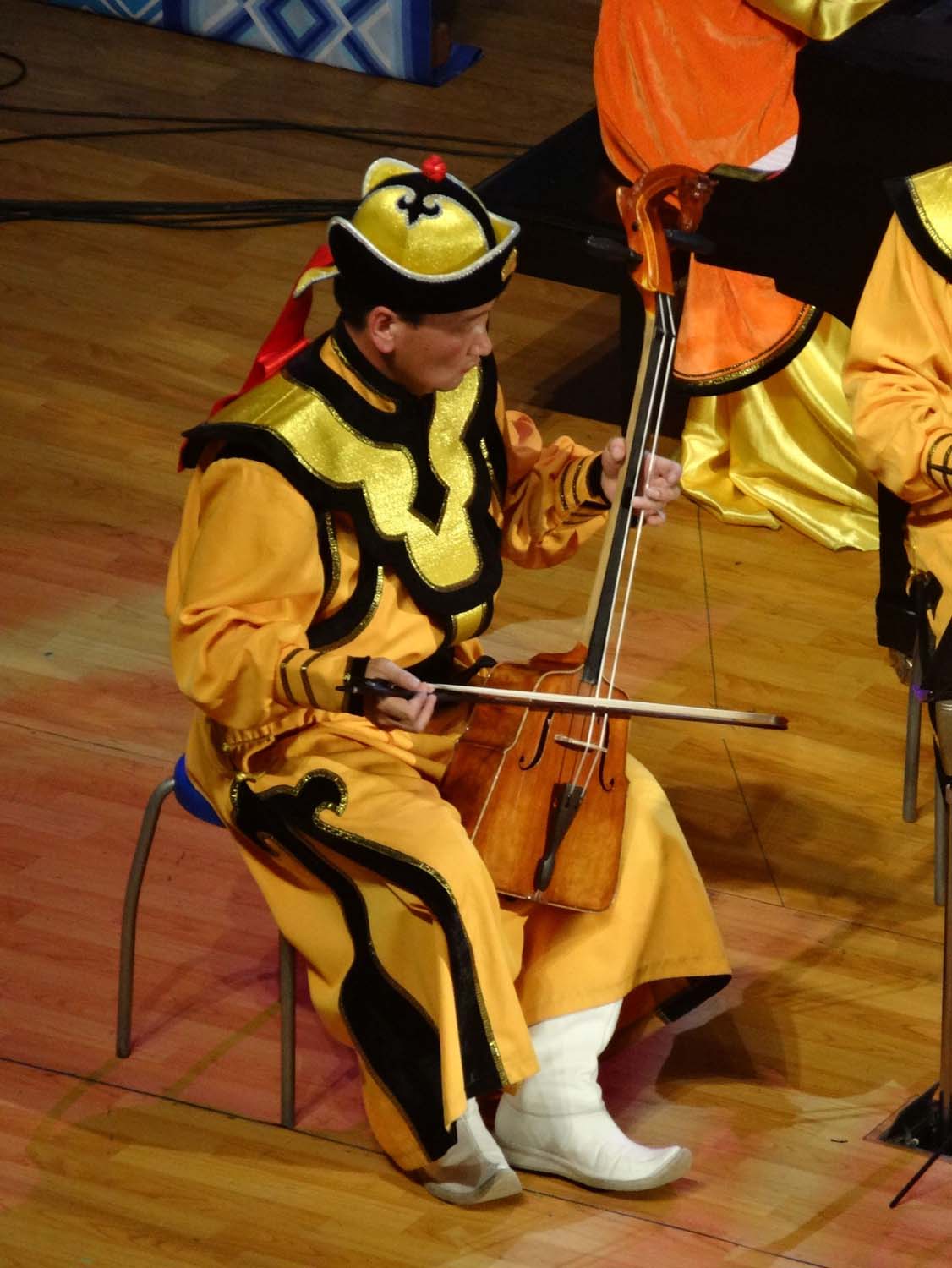 Mongolian horse head fiddle with only 2 strings but amazing sound 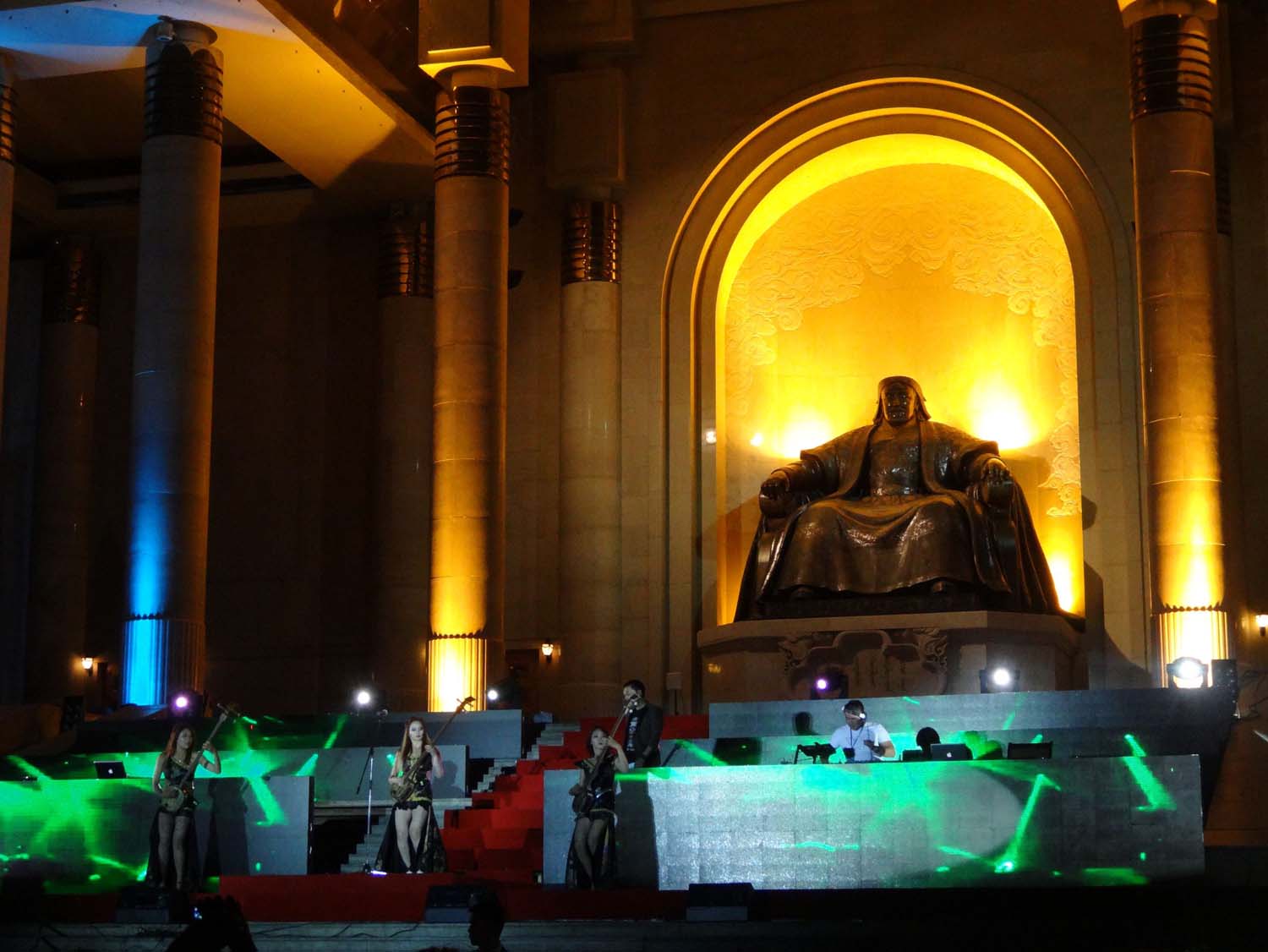 After Lara could drive again (2WD only), we ventured out to Terelj National Park. We desperately wanted to get out of UB for a few days and ‘do something’ again and we decided we would get our kayak out for a bit of a paddle. But on our way to the NP we first stopped at some Turkic steles (ancient rocks with text on them) which were standing in the middle of nowhere and a massive statue of Chinggis Khan (Kengis Khan).

By the time we got to the national park we decided to stop near the river and set up camp. The next day we drove out to the village Terelj at the end of the valley road and pumped up the kayak. The road was 23km long and the river fast flowing so we expected the paddle to be 3-ish hours, around 30km. 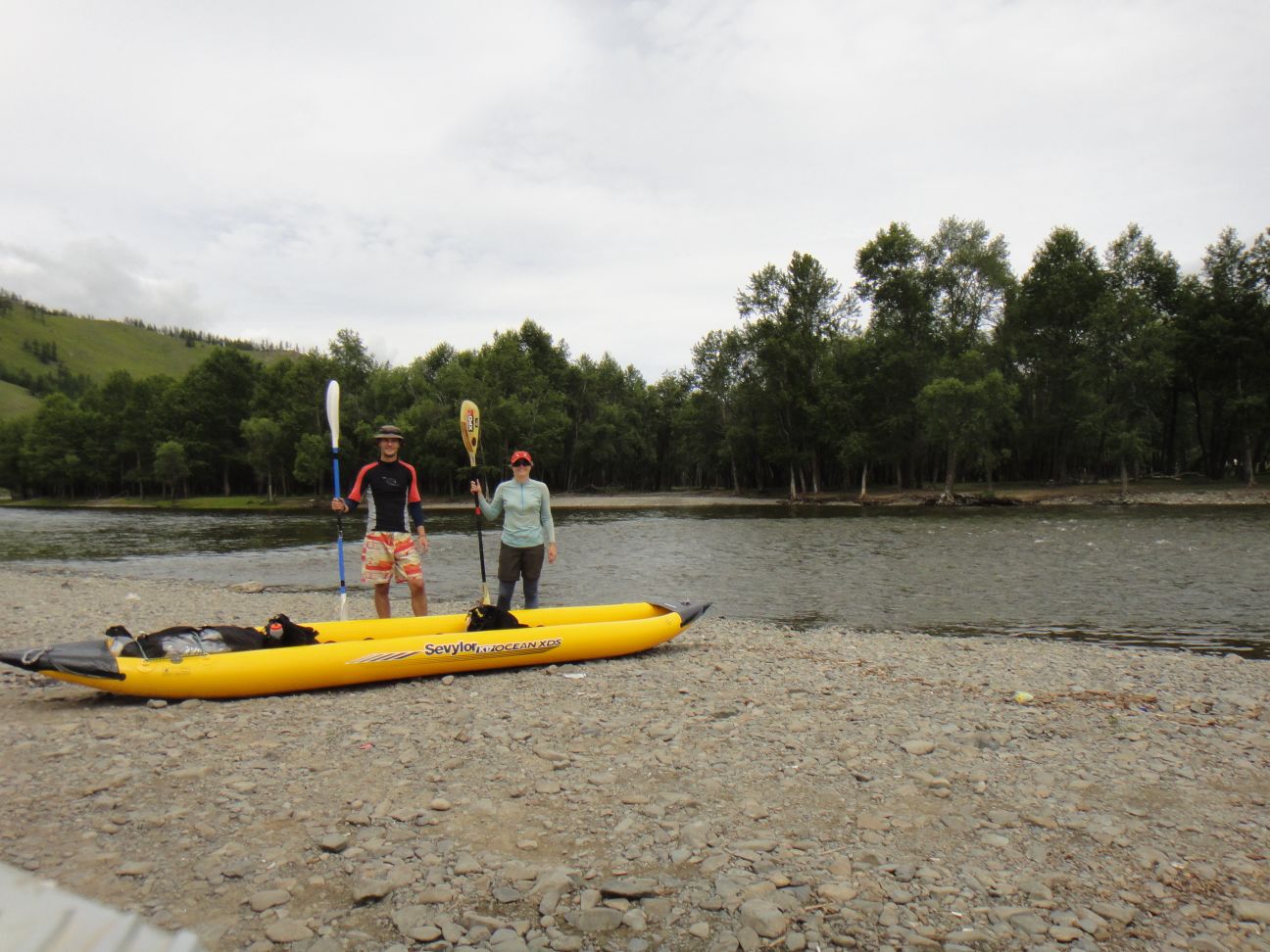 pumped up and ready to go…

We were pretty cold as the sun had been displaced by some grey clouds and we had taken an unexpected swim in the freezing waters of the Tuul Gol river when a tree had attacked us and pushed us in. A bit like the tea trees on the Avon Descent. 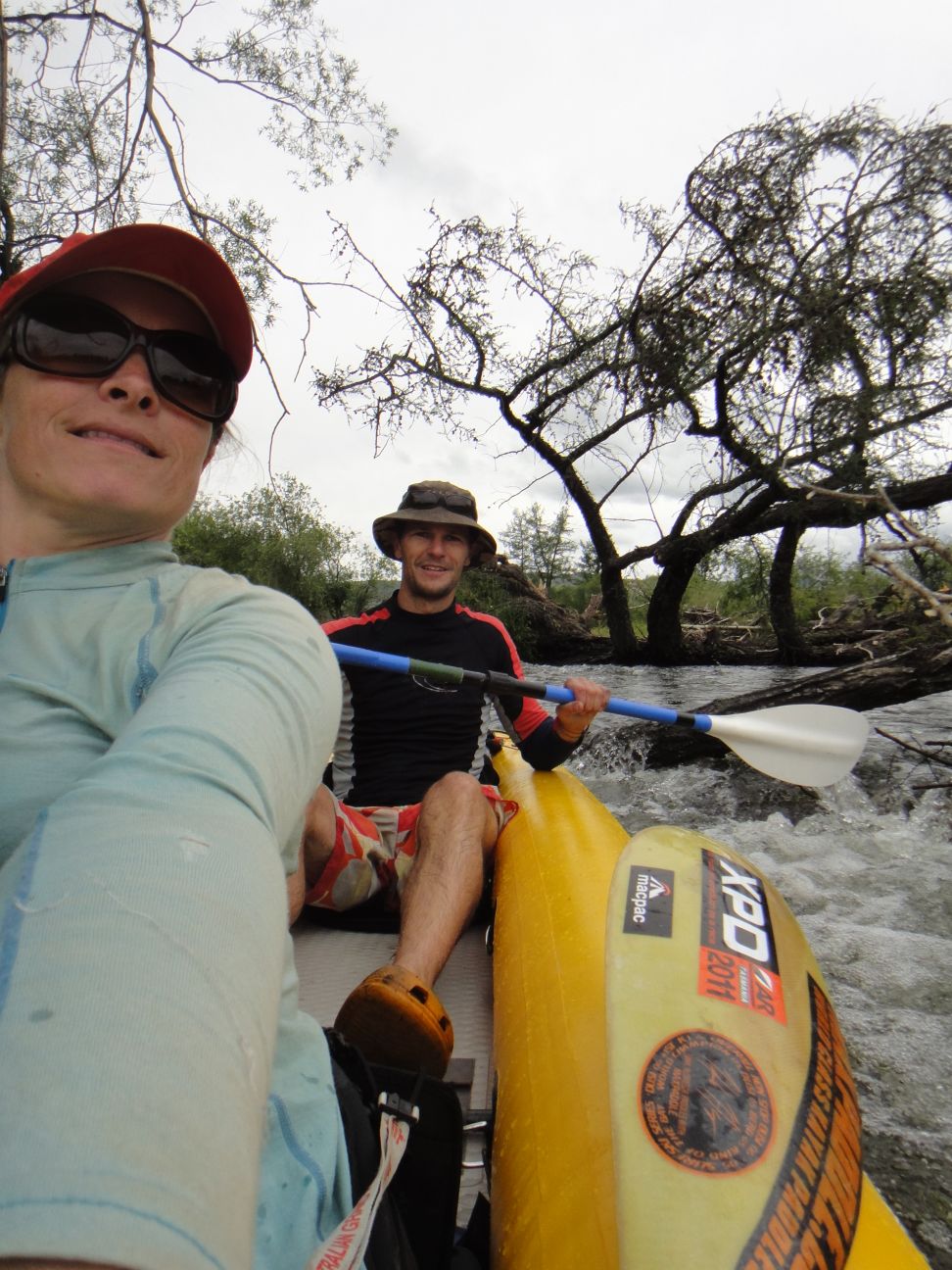 we had to portage a few times to get around trees 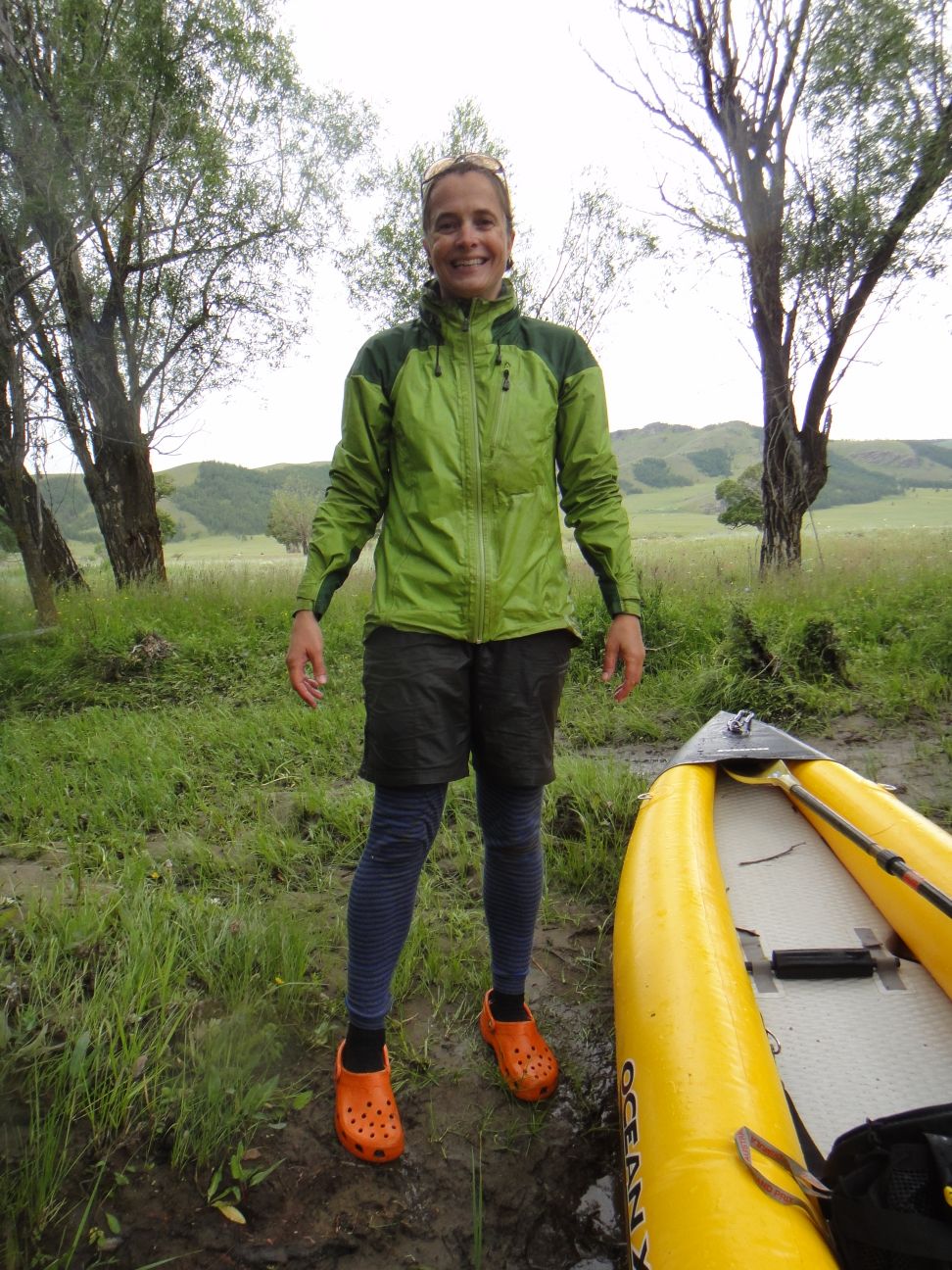 oops, we got pushed in by a tree. It was a bit cold after that!

Hungry and cold we finally arrived at our campsite at 8PM after 7.5 hours of paddling. Jon quickly changed into dry clothes and headed off to the road, hoping for a ride to pick up the car. I got changed too and started cleaning and packing up the boat. Two hours later Jon was back and we had a warm dinner before quickly going to bed. Pretty exhausted, but we loved being ‘out’ there again and sleeping in our Taj Mahal.