We decided to go to Tsavo West, together with Tsavo East the biggest national park in Kenya covering 4% of Kenya’s land mass, it is also one of the biggest national parks in the world. Tsavo is cut into West and East by the main Mombasa to Nairobi road and railway line. Tsavo West is more hilly and volcanic than Tsavo East and it is also home to Mzima Springs. This crystal clear spring originates in the nearby Chyulu Hills where the rain seeps slowly through the porous volcanic rock, emerging 50km and 25 years (!) later in Mzima Springs.

Mzima (meaning ‘alive’) Springs is home to a pod of hippos and a few resident Nile crocodiles and Nile monitor lizards. They have even built an underwater viewing room in one of the ponds so you can see the hippos dance underwater, but unfortunately the hipos no longer frequent the top pool so you can watch the fish instead. 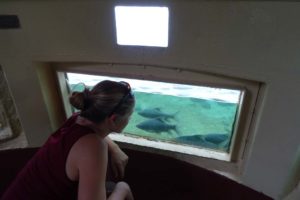 Jude checking out the fish in the underwater viewing room in one of the Mzima Springs, unfortunately there are no hippos to watch

Early Saturday morning we left Nairobi, cruising down Mombasa Rd until very quickly a huge jam slowed us down – a lot. We’re still not sure what caused the jam, but it took us an hour longer than normal to drive the 230km to the Mtito Andei gate. From the gate our game drive to get to the lodge began, and soon we realised how enormous this park is. The distance from the gate to our lodge (Severin) is nearly 50km! 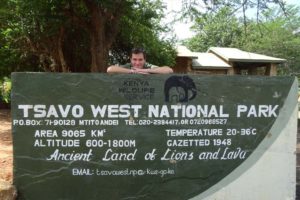 Jon at the entry sign of Tsavo West, the gate is just off Mombasa Rd 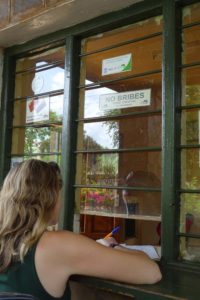 Jude sorting out the paperwork to get in

The lodge wasn’t busy and had upgraded us to a tent that had 2 balconies, one on the ground floor and an elevated one with sunbeds! That was a nice surprise. As usual we didn’t have much time to enjoy the luxuries in camp though as we spend most of our time out on game drives. 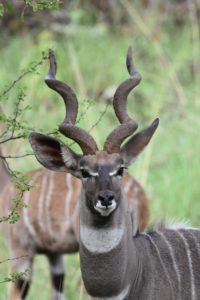 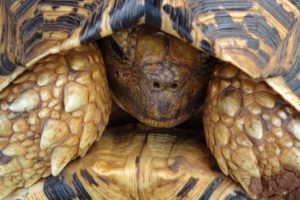 we spotted this shy leopard tortoise right next to the road 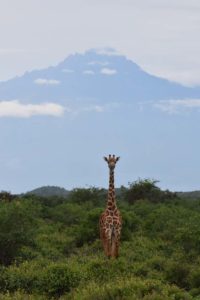 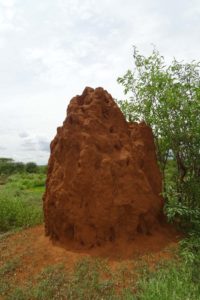 termite mounts can be huge in Tsavo West NP 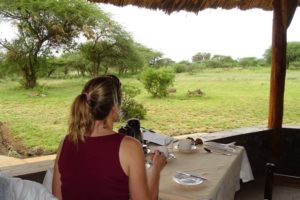 Jude having breakfast with a view at Severin Lodge 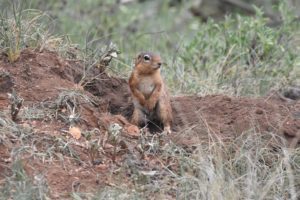 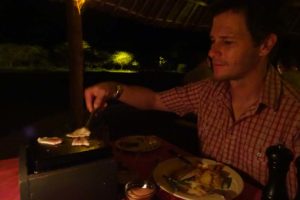 Jon enjoying his own private bbq for dinner at Severin Lodge 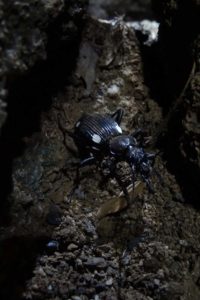 animal spotting doesn’t stop when the sun goes down, and we find this beautiful assassin beetle close to our tent

We drove ourselves and were very lucky with all the animals we saw that weekend. We spotted another zorilla right beside the road, a leopard, Jude saw a glimpse of a caracal and we even came across a black rhino in the rhino sanctuary. And despite the name, most people who enter it never see one as the bush is really thick as that’s what the black rhinos like… The guide at our lodge had never seen one! We also saw a klipspringer, watched a white-tailed mongoose rummage around for a while and identified heaps of new birds (for us). 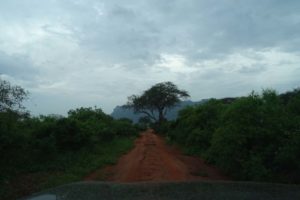 proof we saw a black rhino in the sanctuary! 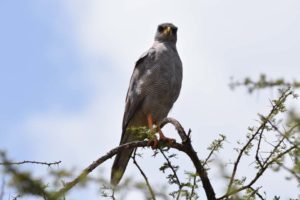 another new bird for us – the eastern chanting goshawk 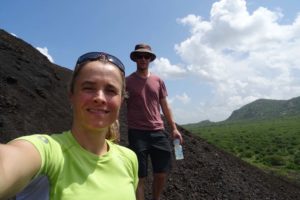 Jude and Jon on Chaimu, a volcanic cone in Tsavo West NP where you can hike to the top for some spectacular views 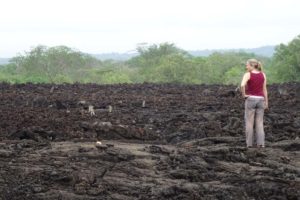 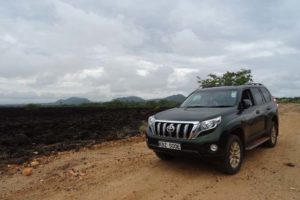 our trusty Porky with sunroof, perfect for our safaris

the road through the Shetani Lava Flow

It was really nice to spend an extra night in Tsavo West, we usually only spend one night somewhere and that can sometimes feel a little rushed.It also meant we had time to hike up Chaimu (an old volcano) and drive through the Shetani lava flow, quite impressive. The flow is from a volcanic eruption but it isn’t certain how long ago this took place. There are still only very few plants growing amongst the black, jagged rocks so it can’t have been that long ago.

Despite our 3-day weekend we still had no time to try the gym, but made sure we had one dip in the fantastic swimming pool before heading home again on Monday afternoon. 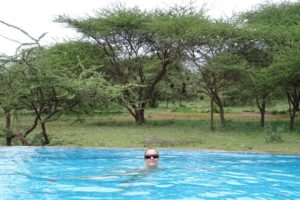 Jude in the pool at Severin Lodge, the wildlife sometimes walks straight past