Kenya is blessed with a large number of national parks and we feel it is our duty to try them all during the time we are privileged to be living here. Now that we have both been granted resident status, we have an added bonus of very affordable entry fees.

We used a few of our long weekends to explore some of the parks that are a bit further away: Tsavo East and Amboseli NP. Three days off  gives you enough time to drive that little bit further from Nairobi. The first long weekend we decided to go to Tsavo East. Kenya’s largest national park is located about 350km from Nairobi, just off the road to Mombasa. In fact, the road to Mombasa cuts Tsavo into Tsavo East and Tsavo West.

That distance should only take about 3-4 hours driving, but unfortunately that is not the case on Mombasa Rd. Traffic on Mombasa Rd is diabolical with many, many trucks transporting everything that arrives into the country at the port of Mombasa to the rest of the country and beyond into the rest of East Africa. Some of these trucks reach a top speed of 10km an hour on the hills (due to overloading, sometimes 4 times the allowed weight limit) and overtaking is not easy as it is just a single lane going both ways… It doesn’t help that some of the buses (obviously in a hurry) overtake without checking if the road is clear… Mombasa Rd is quite an experience, requiring nerves of steel.

We planned accordingly as people had warned us about traffic, so on Saturday morning we hit the road at 4.30AM. This meant we arrived at the park entrance just before lunchtime. The plan was to cruise slowly to our camp and have lunch there once we arrived. And we hadn’t even driven 2 km when we spotted our first cat: a lioness sitting in front of some scrubs. It was a good omen for the rest of the weekend and we ended up seeing a lot of (unusual) animals. 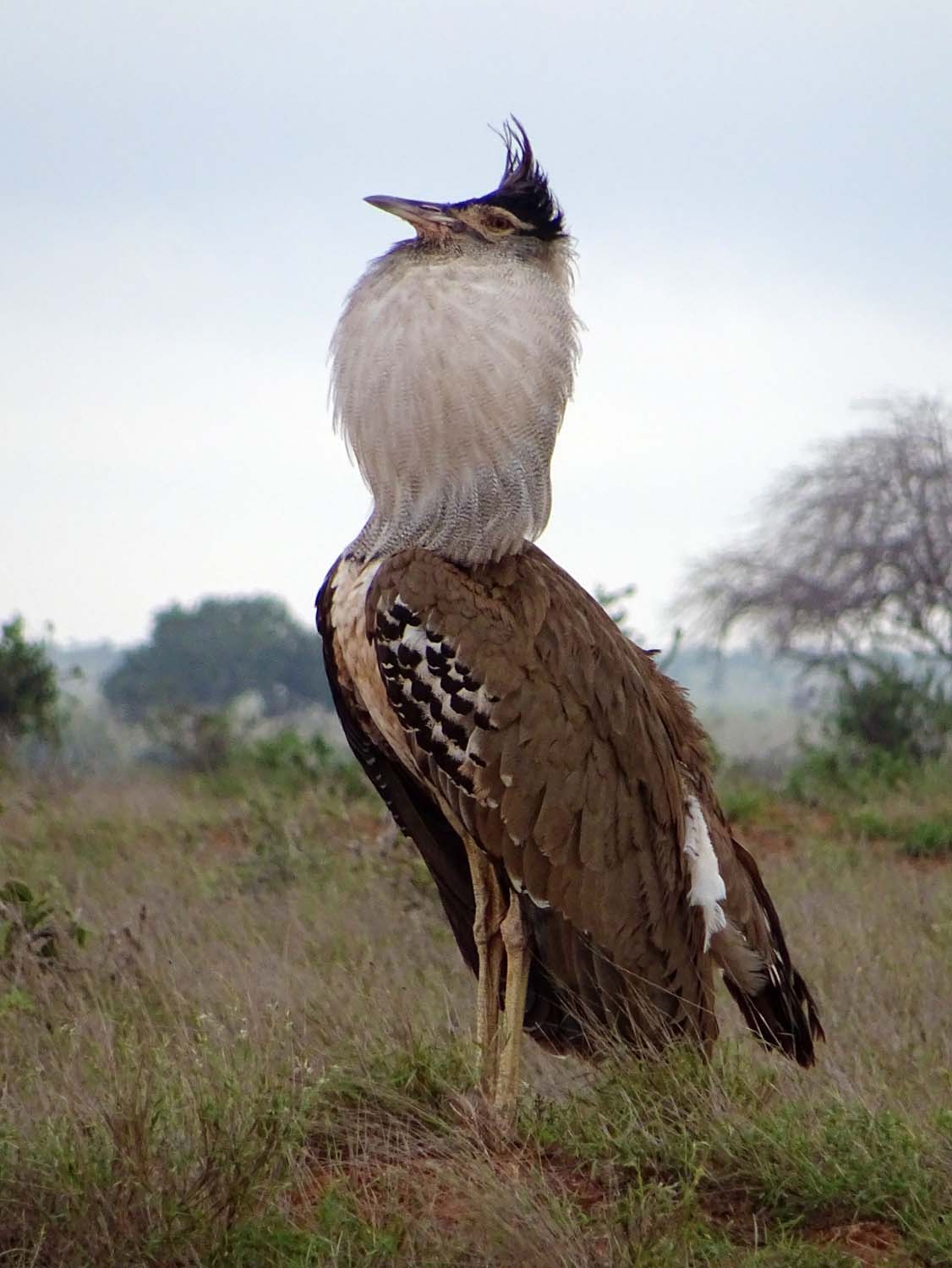 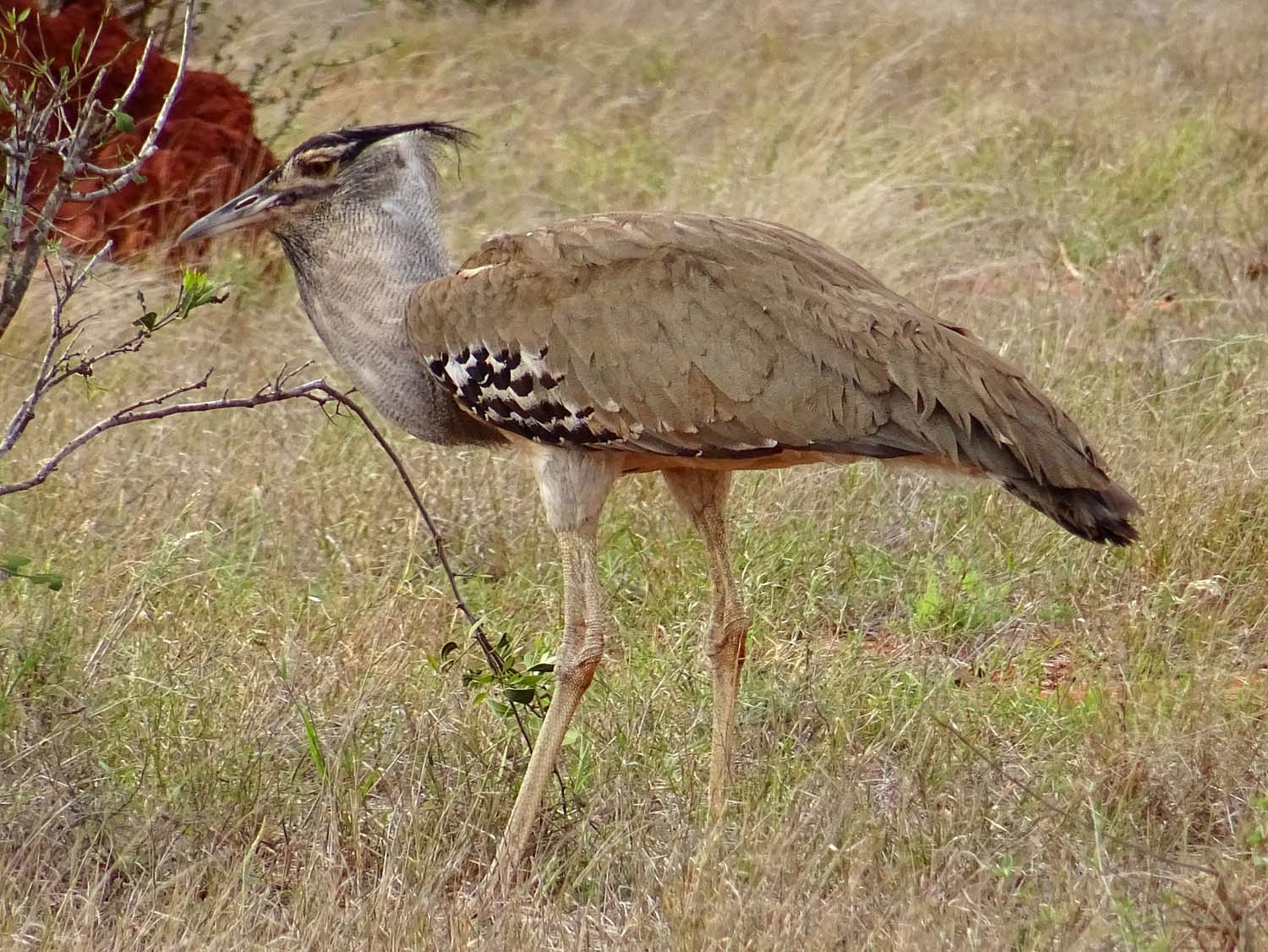 this is what he looks like normally… (Tsavo East) 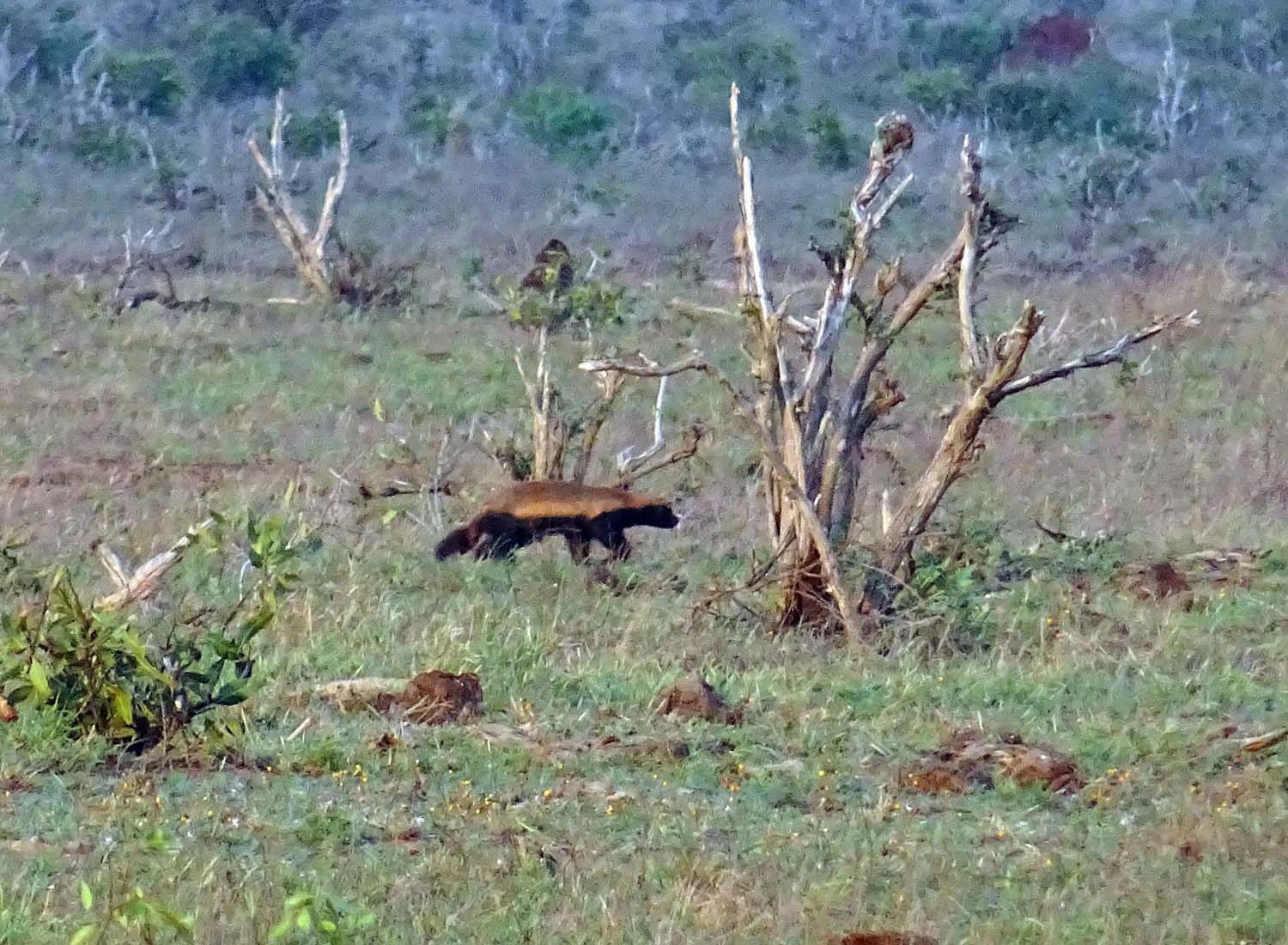 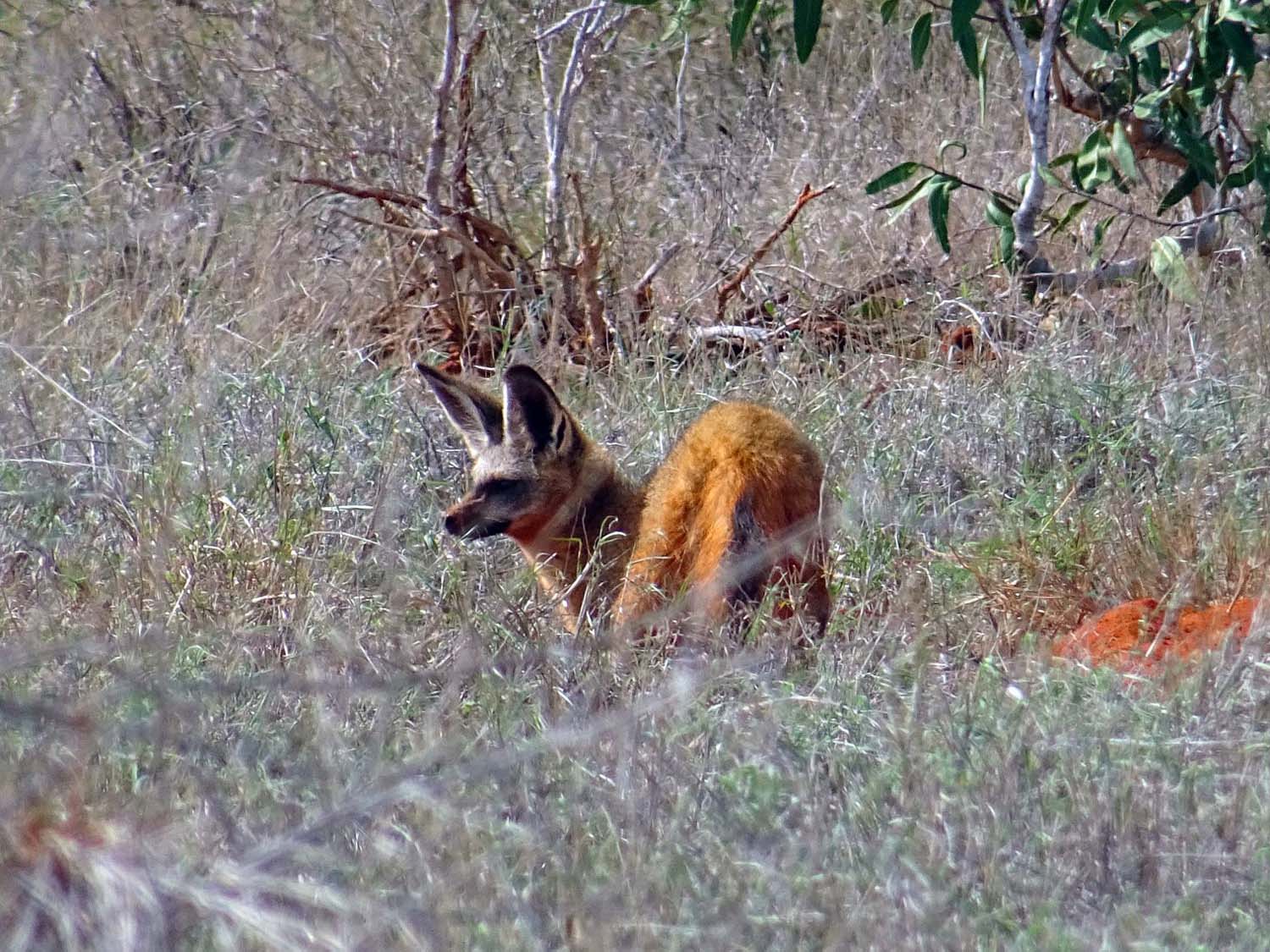 the bat-eared fox uses his huge ears to detect insects at night when it feeds, for example dung beetles and harvester ants. It also has the largest number of teeth of any African land mammal (45-50) (Tsavo East) 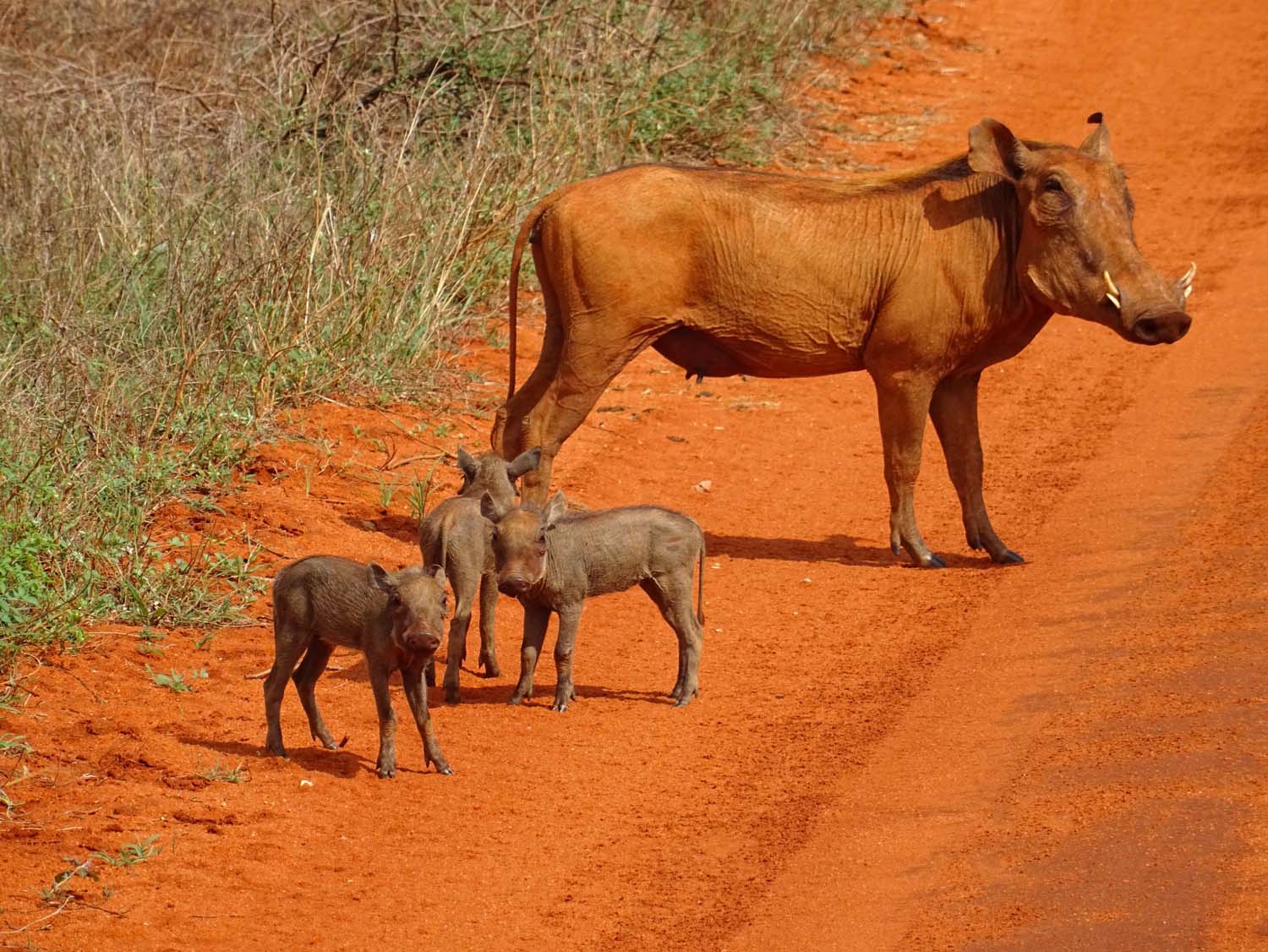 we think this is the desert warthog, not the common warthog… they are hard to tell apart (Tsavo East)

Our camp was amazing (Satao, meaning giraffe in the local language), the best we have seen anywhere. It only has a relatively small number of tents, is not fenced off, has a fantastic waterhole with some resident hippos, a small lookout tower and a good restaurant with great views also over the waterhole. At night there is always a guard to escort you to and from your tent to make sure you are safe. A herd of impalas makes the central area home at night, realising they are quite safe there from lions as they rarely make an appearance with humans and guards around. Giraffes and hippos also venture into the central area regularly. We almost had to push one giraffe out of the way on returning from dinner as he was blocking the entrance of our tent whilst eating from the acacia next to our tented bedroom. 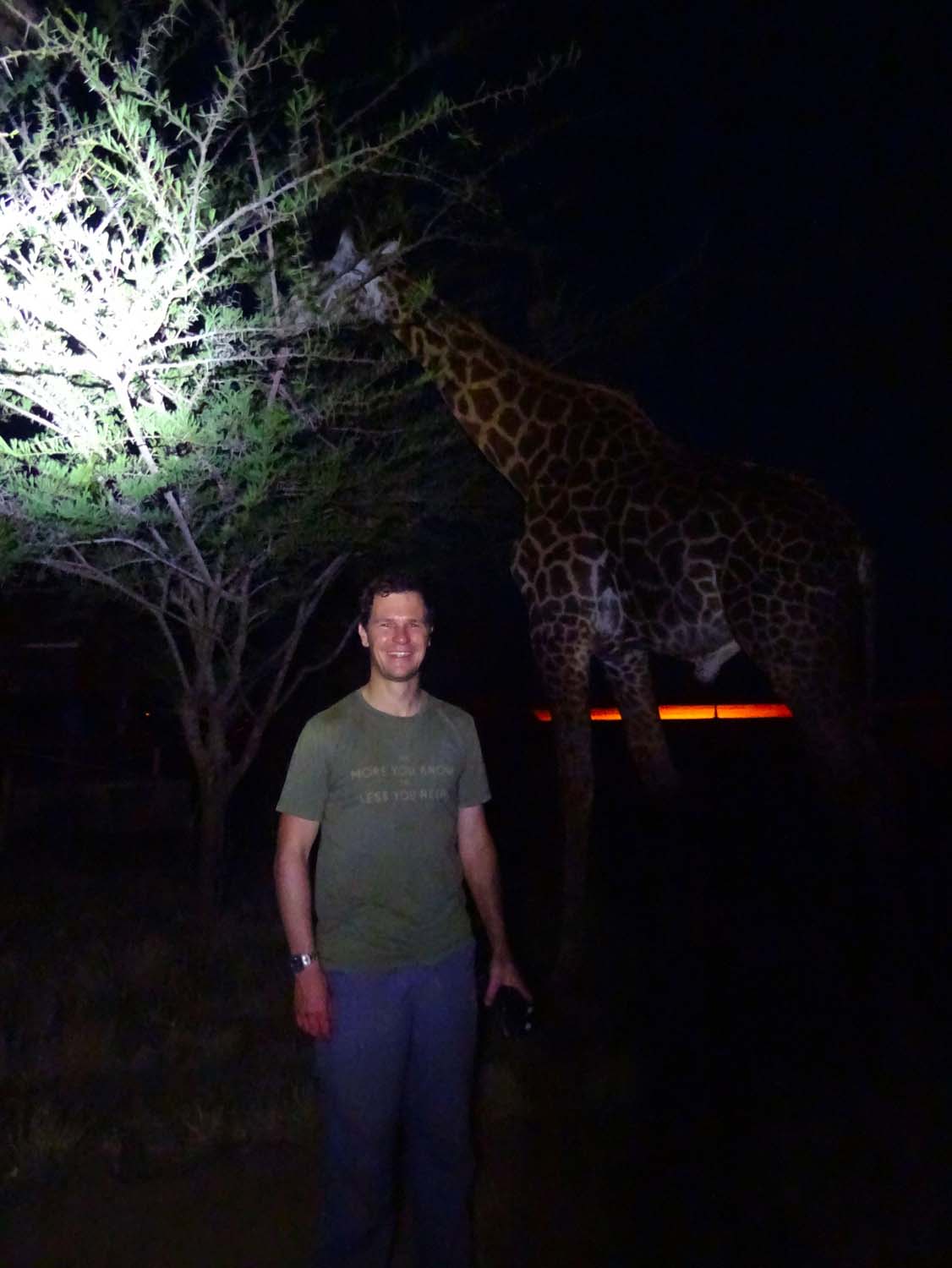 When we say tent, don’t think of a small tent with inflatable mattresses on the floor and a sleeping bag. These are luxury tents that come with their own 4 poster bed and even a full ensuite bathroom. From our bed we could see the waterhole and all the animals coming in for a drink, including the 3 lions who came for a middle of the night drink (the guards woke us up for this, as requested!). 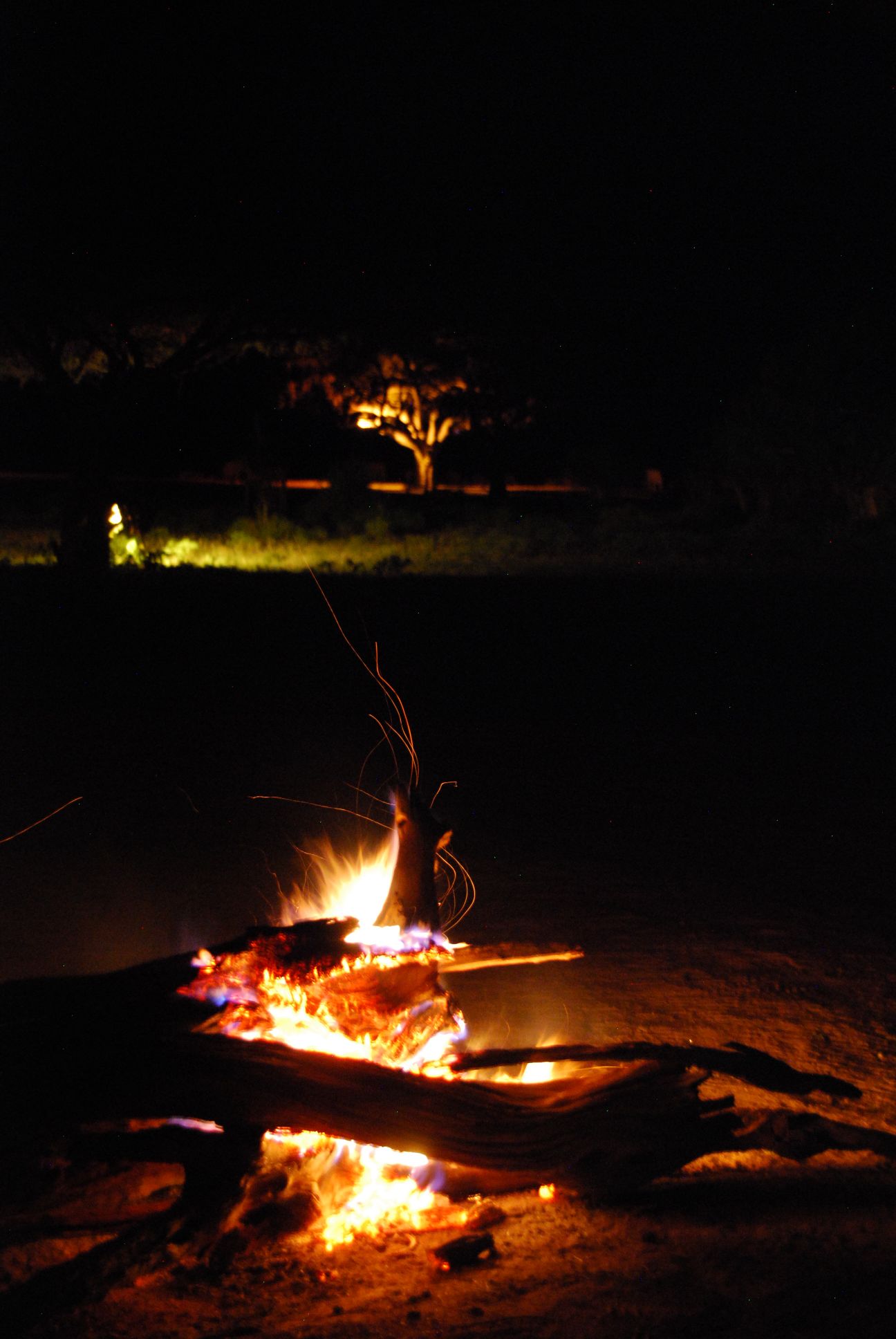 view of the waterhole from the campfire at night (Tsavo East)

Tsavo East is absolutely vast and even over the 3 days we didn’t manage to see everything. And we were only able to visit the southern half of the park, as the northern section is not open to the public (our blog on Umani Springs explains why). One of the things Tsavo is particularly famous for is its red elephants. They love to cover themselves in mud and dust for protection from the sun and insects, and such is the colour of the soil here the elephants appear to be red. 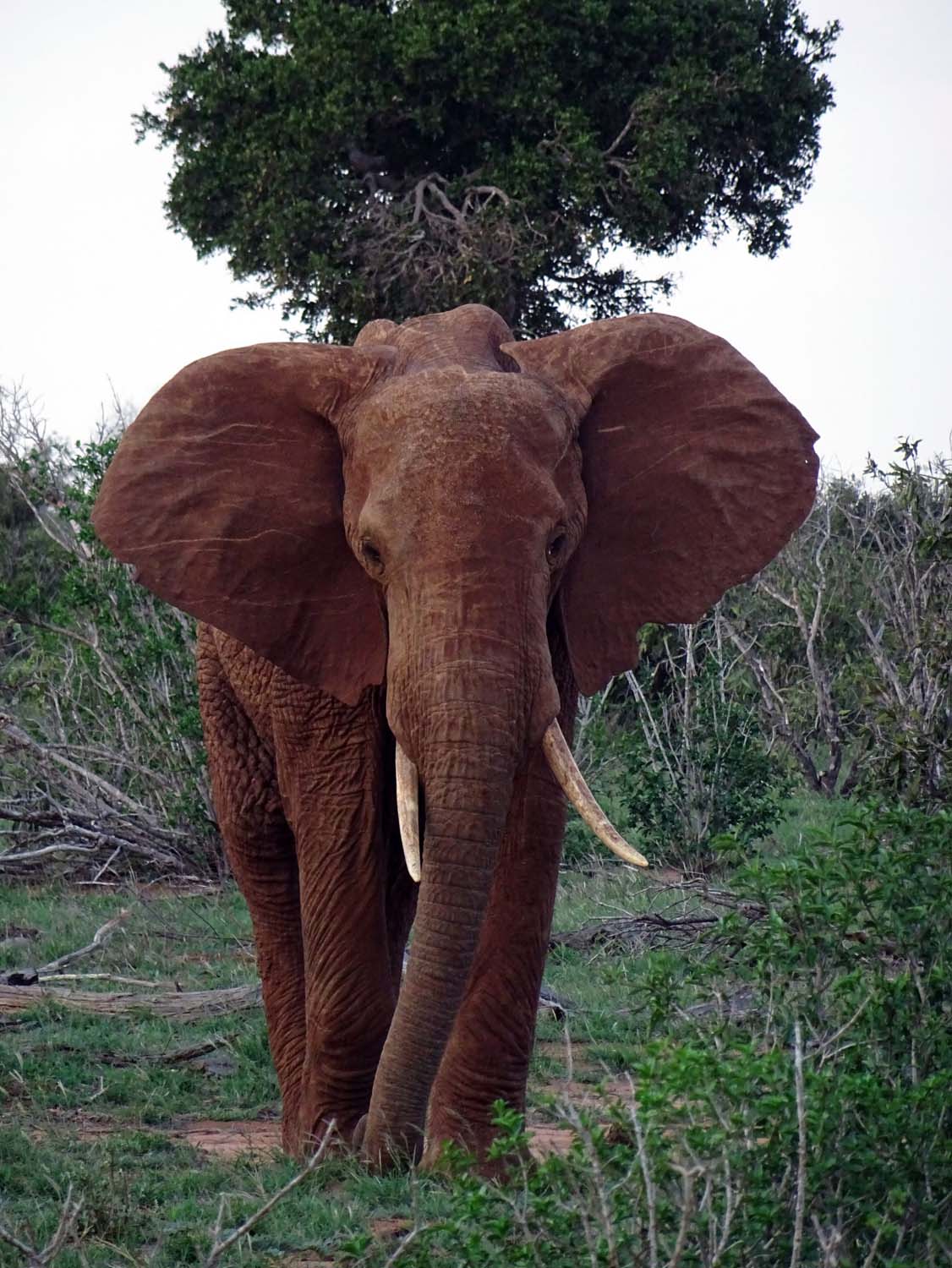 the elephants in Tsavo look very red due to the red earth there.

The other thing Tsavo is well-known for are the maneless male lions, also known as the man-eaters from Tsavo. If you are interested you can read the book ‘The Man-Eaters of Tsavo’ from John Henry Patterson (1907). It recounts his experiences while overseeing the construction of a railroad bridge in what would become Kenya. It is most widely known for recounting the story of a pair of lions that he killed, known as the Tsavo man-eaters. It has also been made into a movie called ‘The Ghost and the Darkness’ with Val Kilmer and Michael Douglas (1996).

Tsavo really is Africa personified: huge open plains full of wild animals of every description. We’ll be going back here for sure.

mum and baby giraffe in the setting sun (Tsavo East) 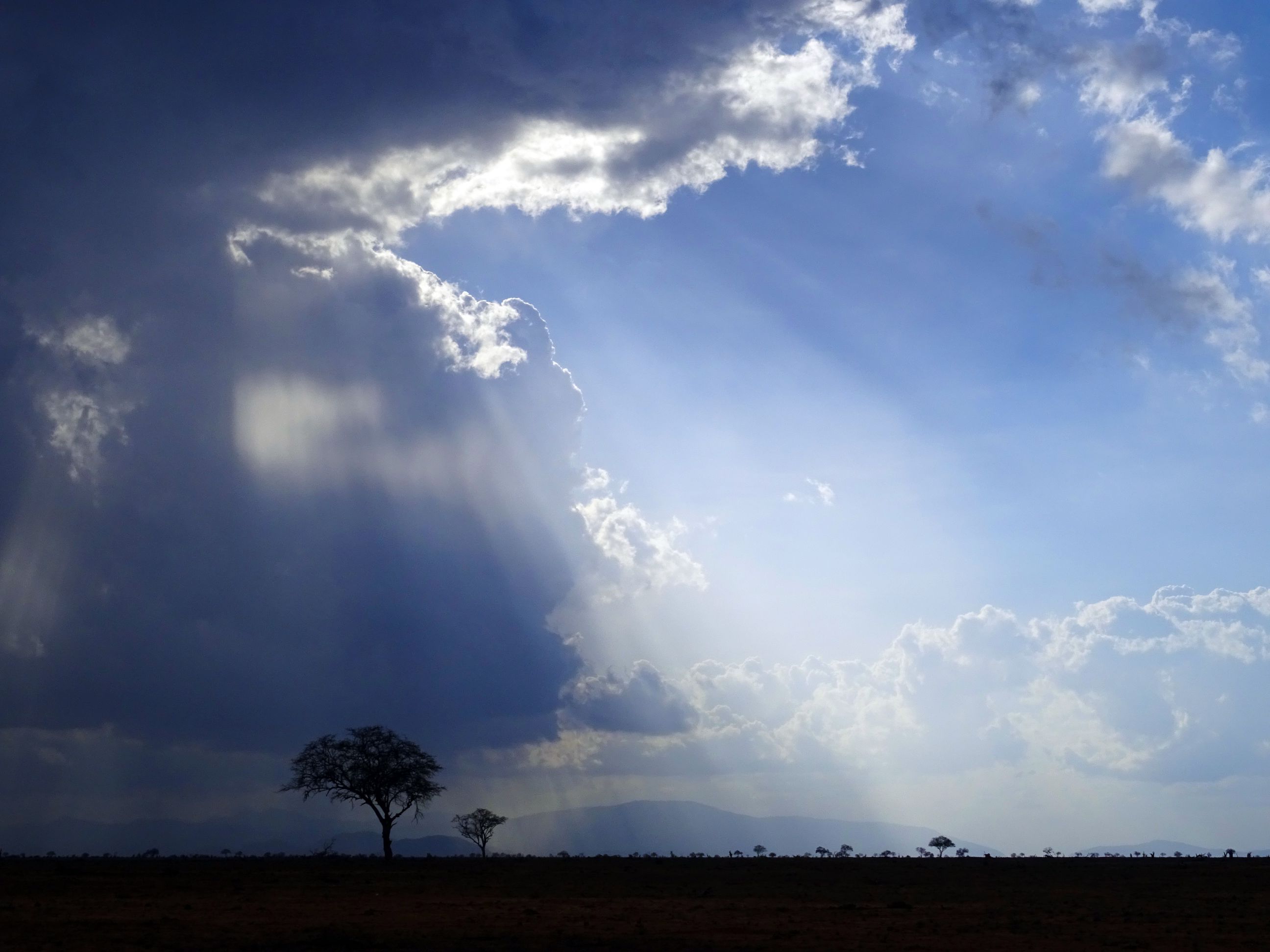 Another long weekend was spent in Amboseli NP, together with Jon’s colleague Rob. Again the distance to the park (about 230km) doesn’t convey how long the drive really takes (about 4-4.5hrs), but an early start again made sure we were there on time for lunch (after entering through the gate it still takes a few hours to slowly drive to our camp).

Amboseli NP is famous for 2 things: its elephants (not red this time) and the impressive backdrop of Kilimanjaro just across the border in Tanzania. The first day we didn’t manage to see Kili as it was covered in cloud, but the next 2 days we had some good views in the morning before the clouds moved in later in the day. 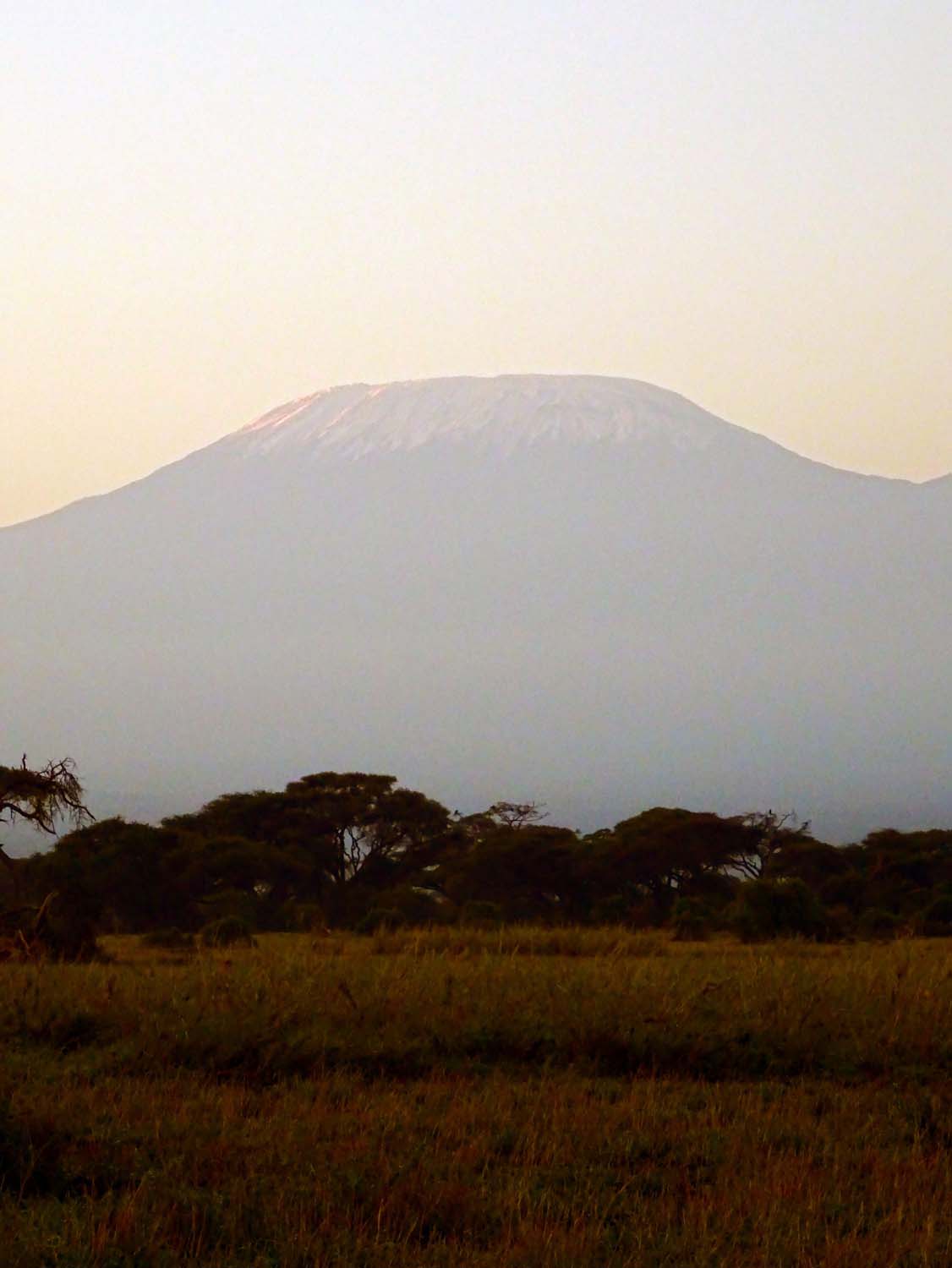 The elephants here love the swampy areas and we spotted one small herd near the road. It is a beautiful sight. Only the backs of these huge animals are visible as they slowly move through the swamp, taking huge mouth-fulls of the water plants. They must love it, being cool in the water with so much food around all at mouth height. Fantastic! The babies have a bit of a tougher job in the swamp as it is quite deep, so we were very lucky that one mum decided to stroll out of the swamp right in front of us to feed her precious baby boy before leading them back into the swamp again. We watched them for hours! 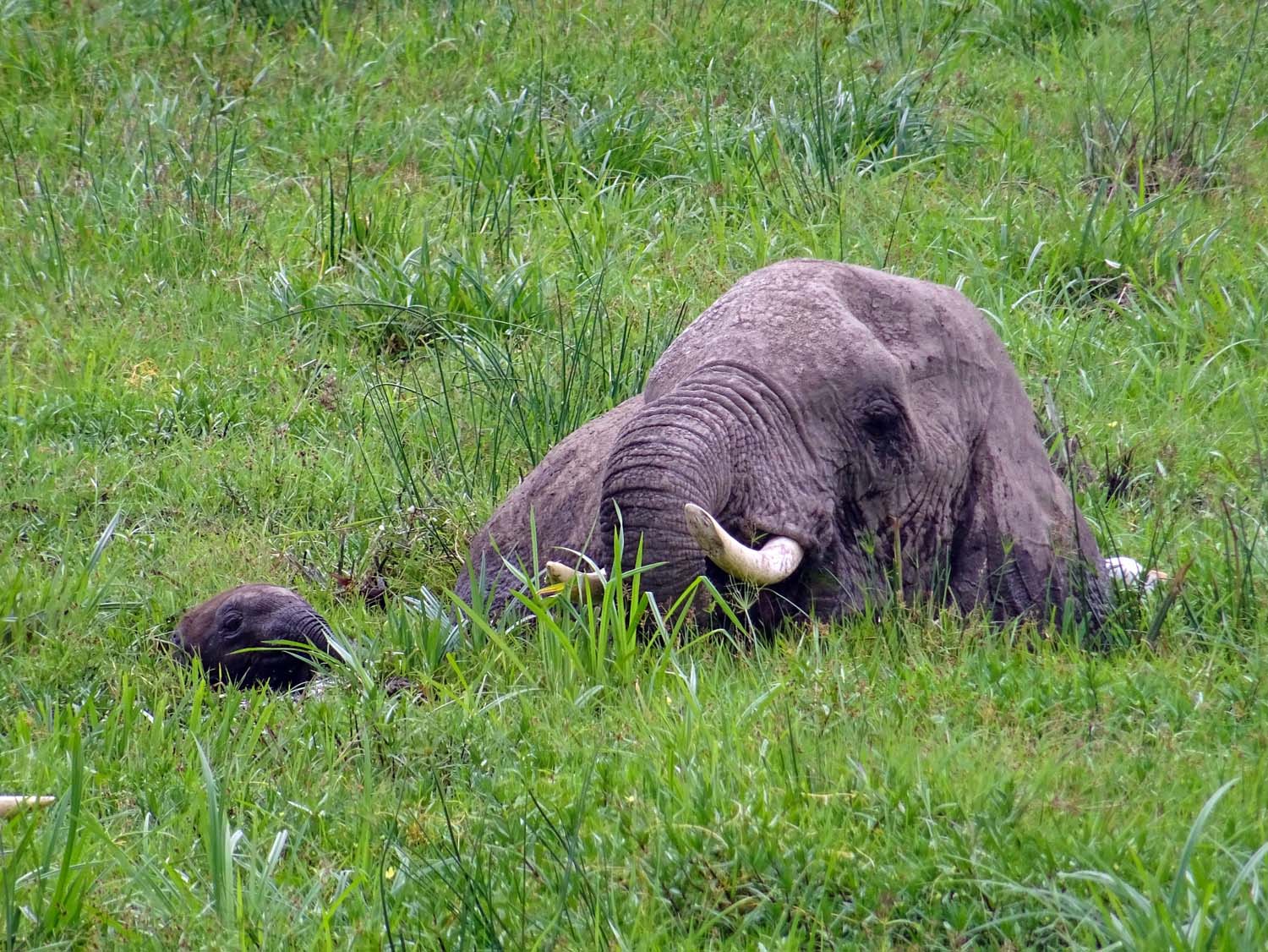 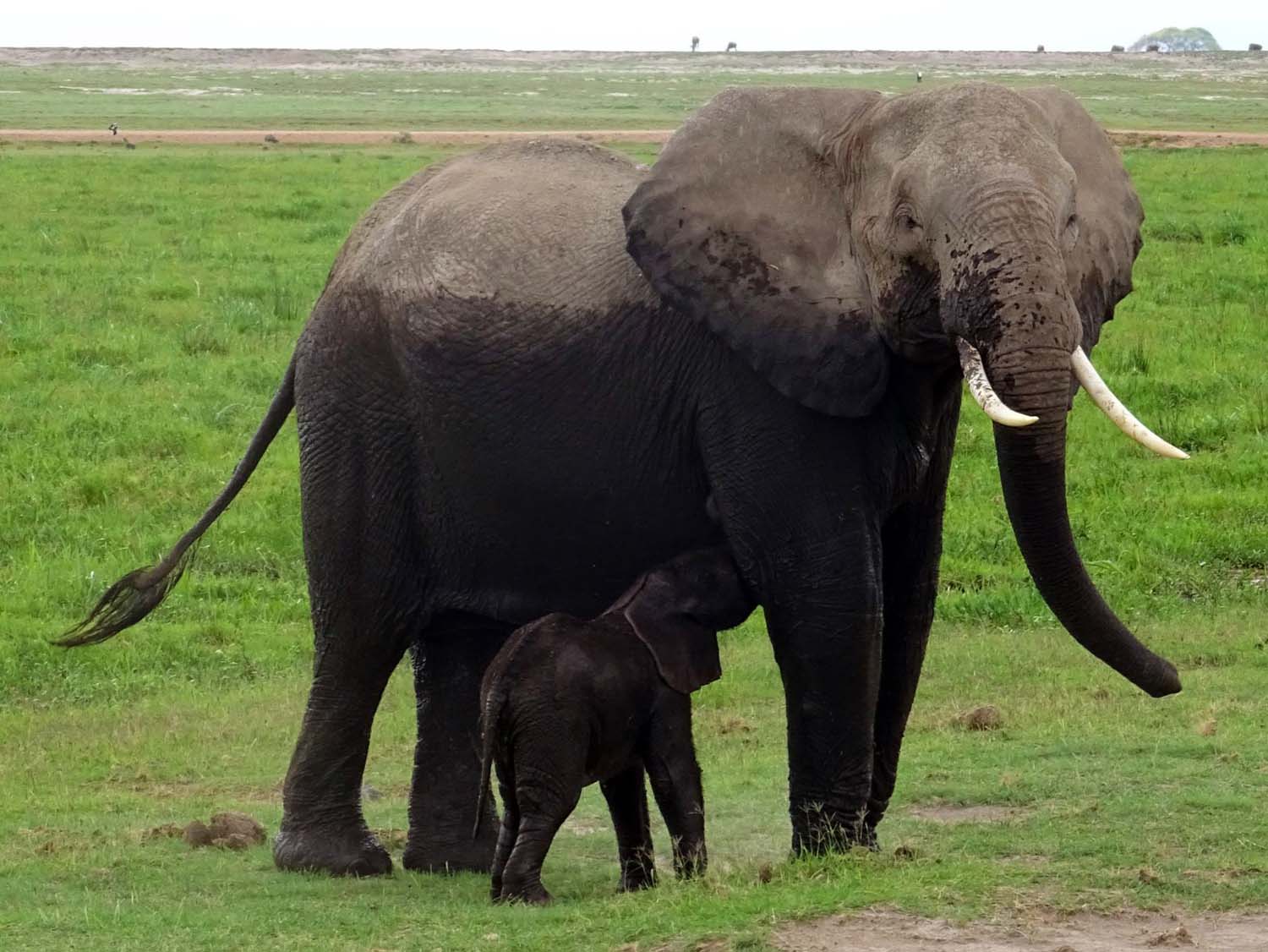 this mum gives her baby a break and a drink when coming onto dry land, you can see the depth of the swamp on her body (Amboseli) 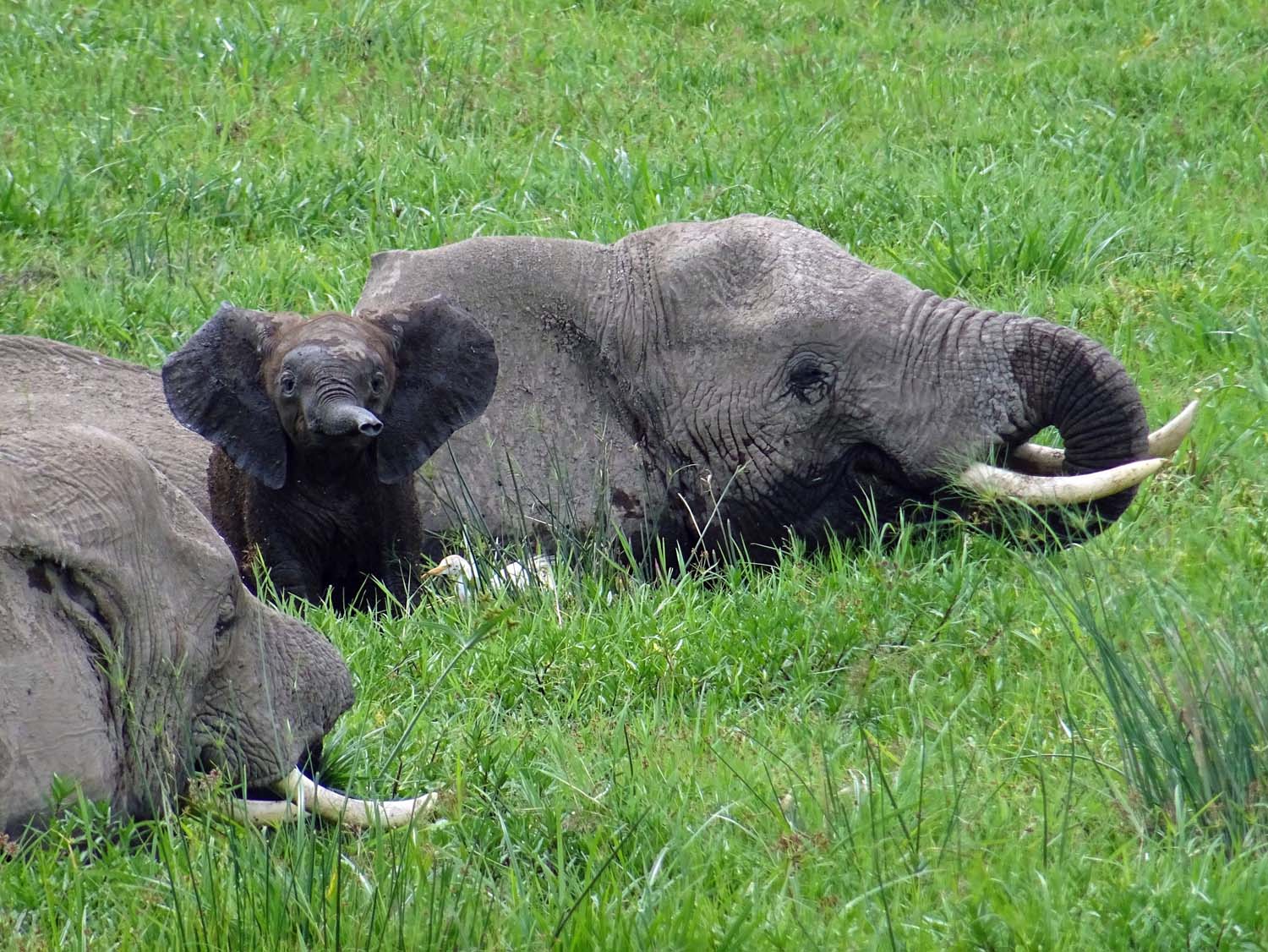 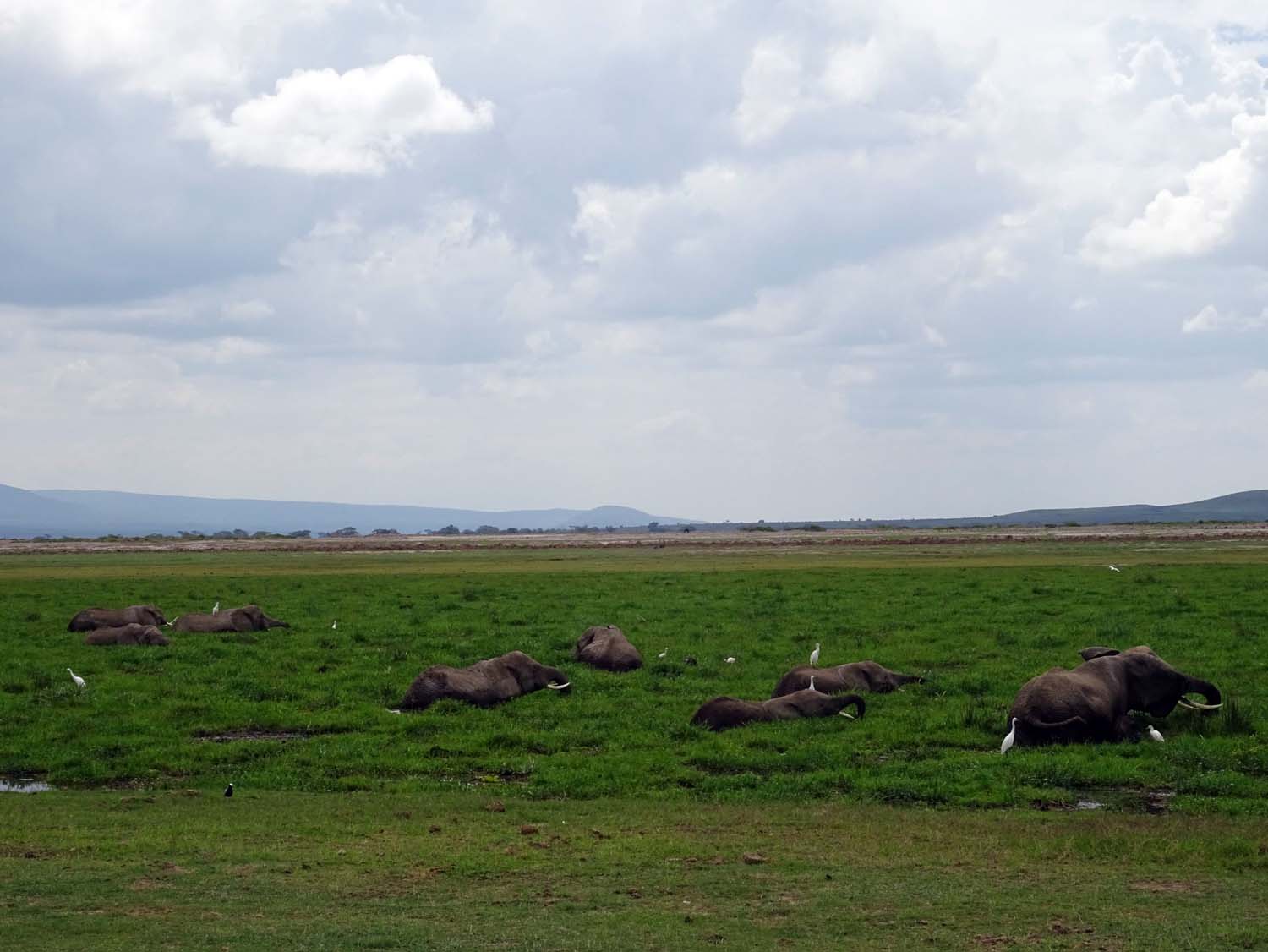 After a fantastic 3 days here, we had fallen in love with this national park too. And with each park being beautiful and unique we will definitely be going back in the future. Just let us know which one you want to ‘do’ when you get here! (we’ll write about other parks too once we have visited them). 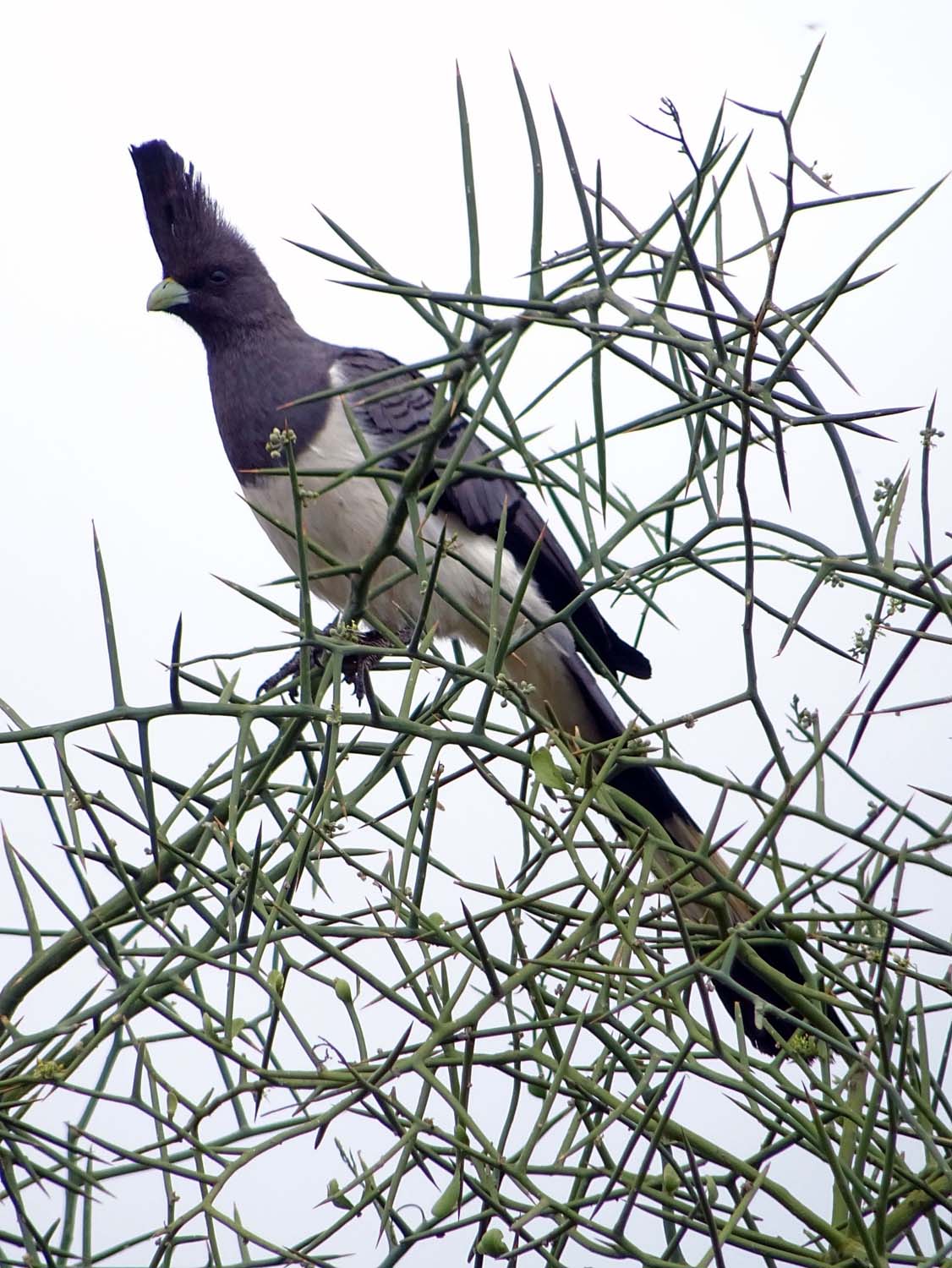 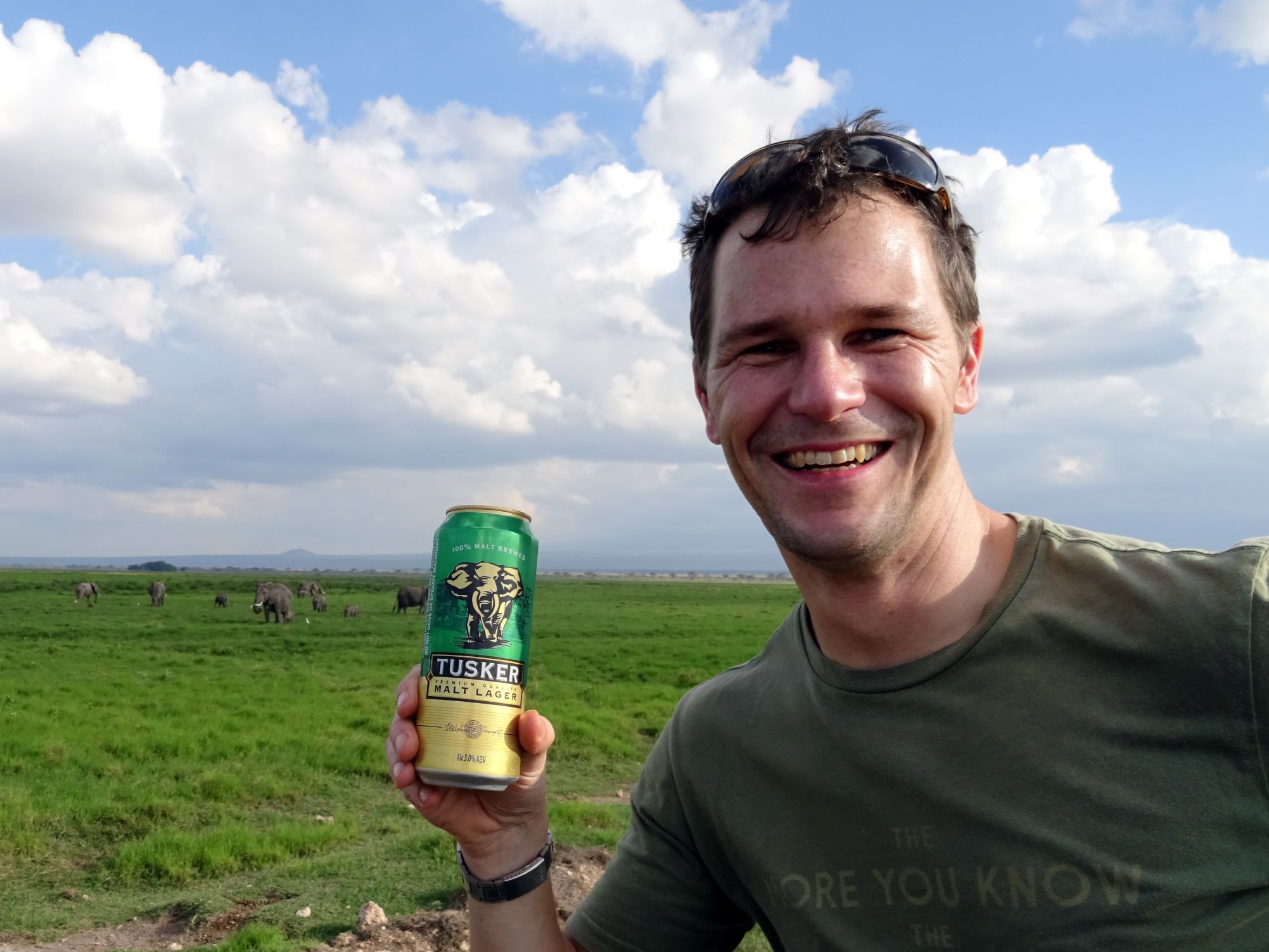 having a Tusker whilst trying to find a tusker… (Amboseli) 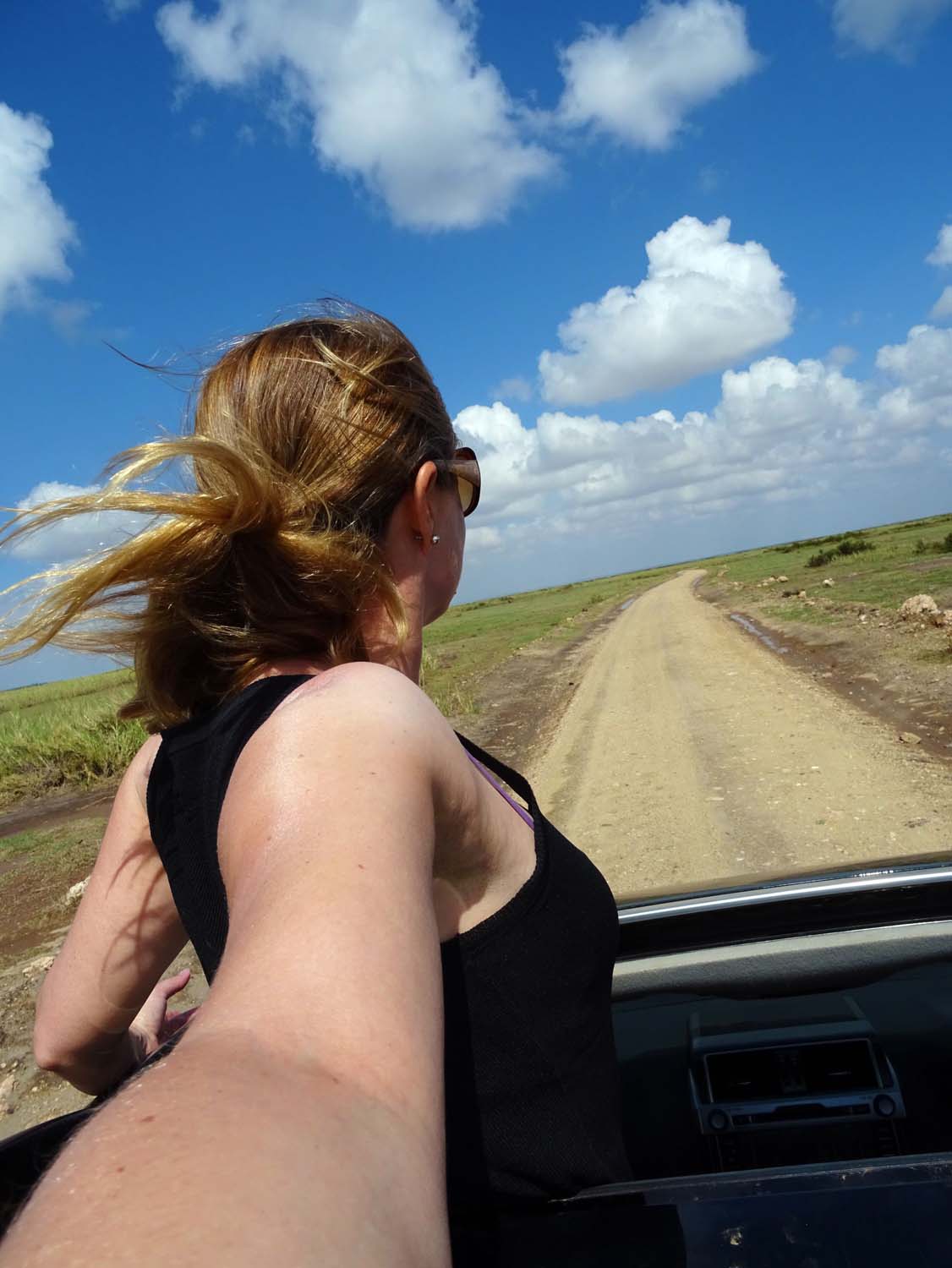 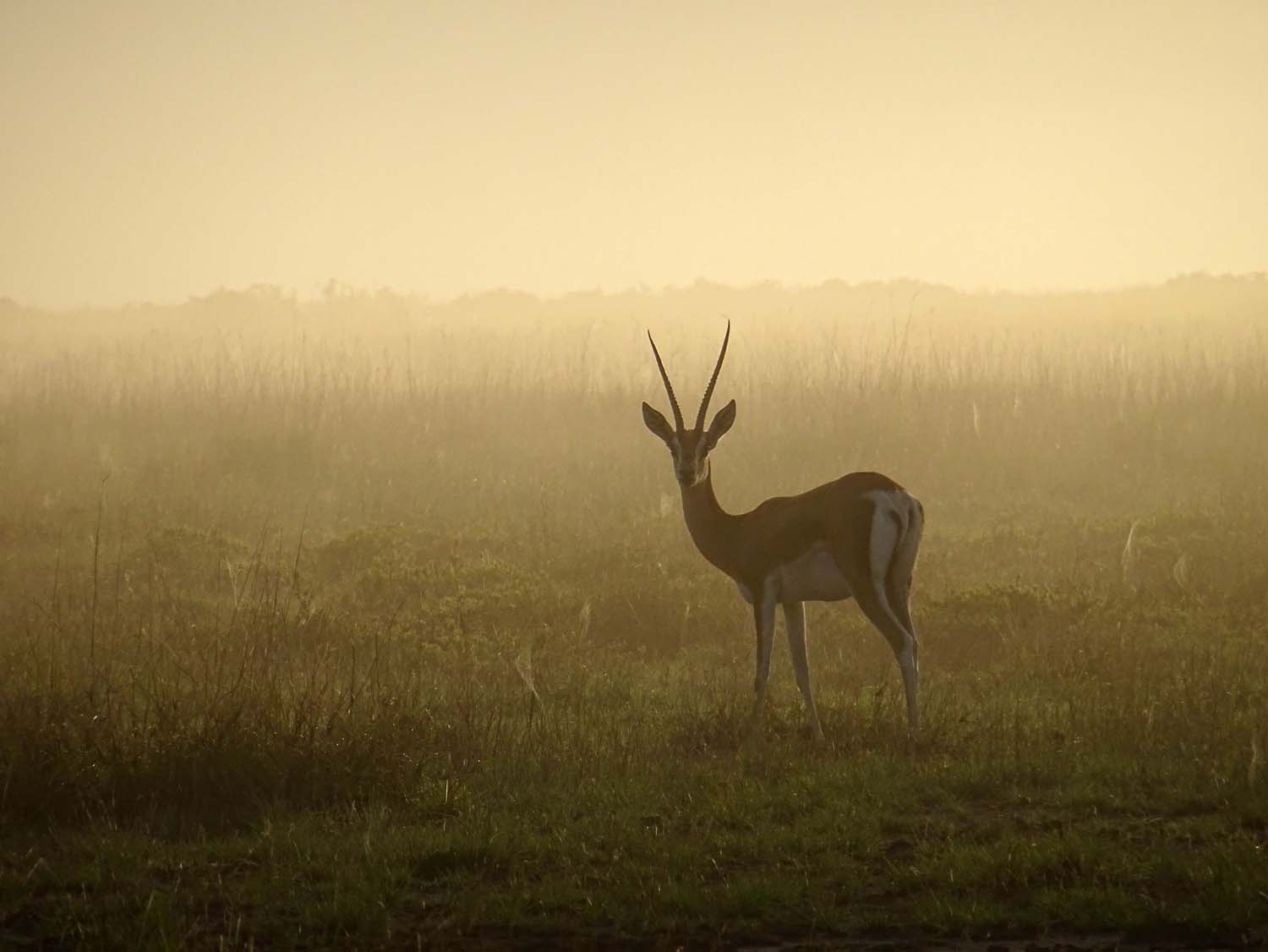 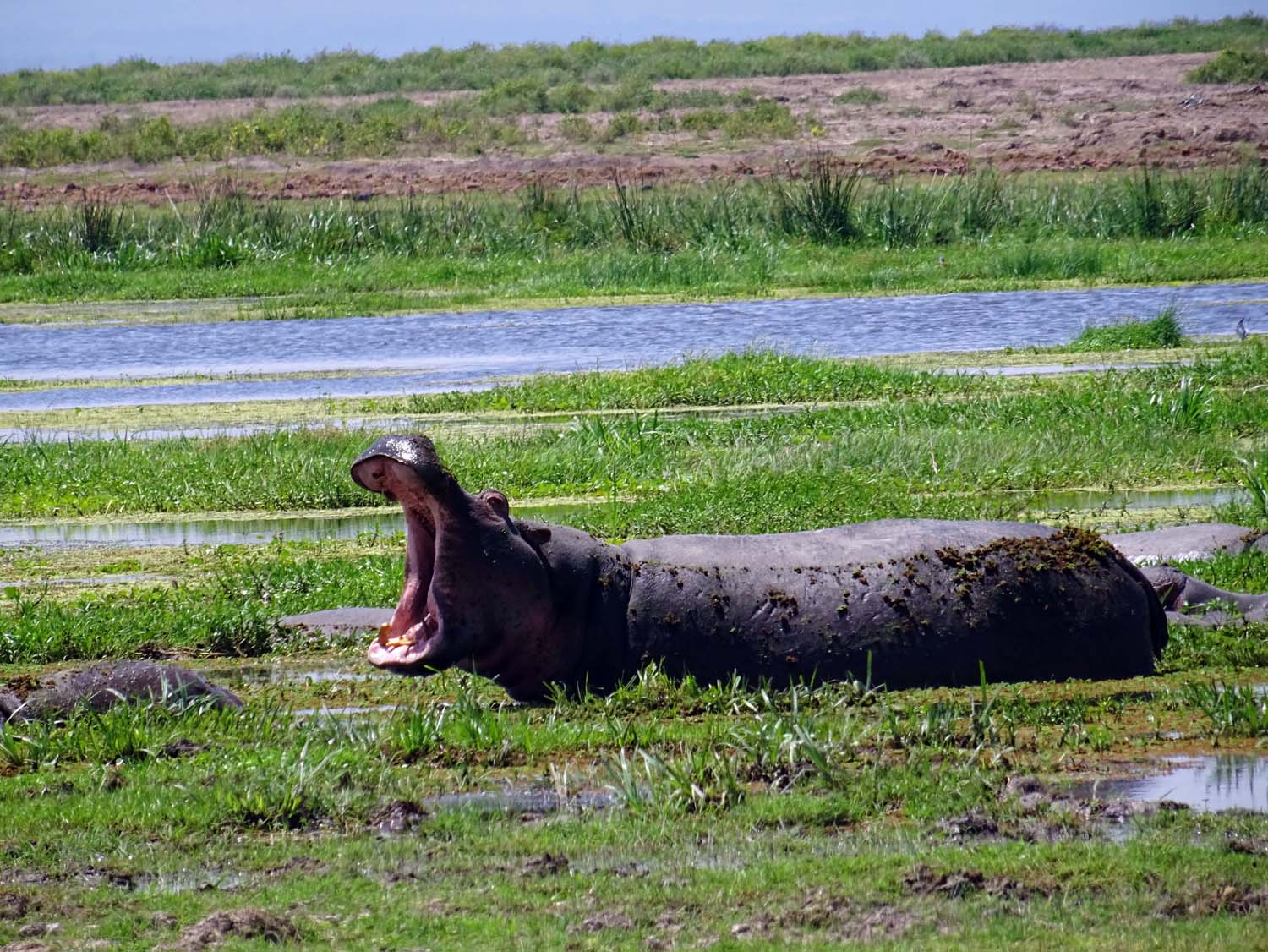 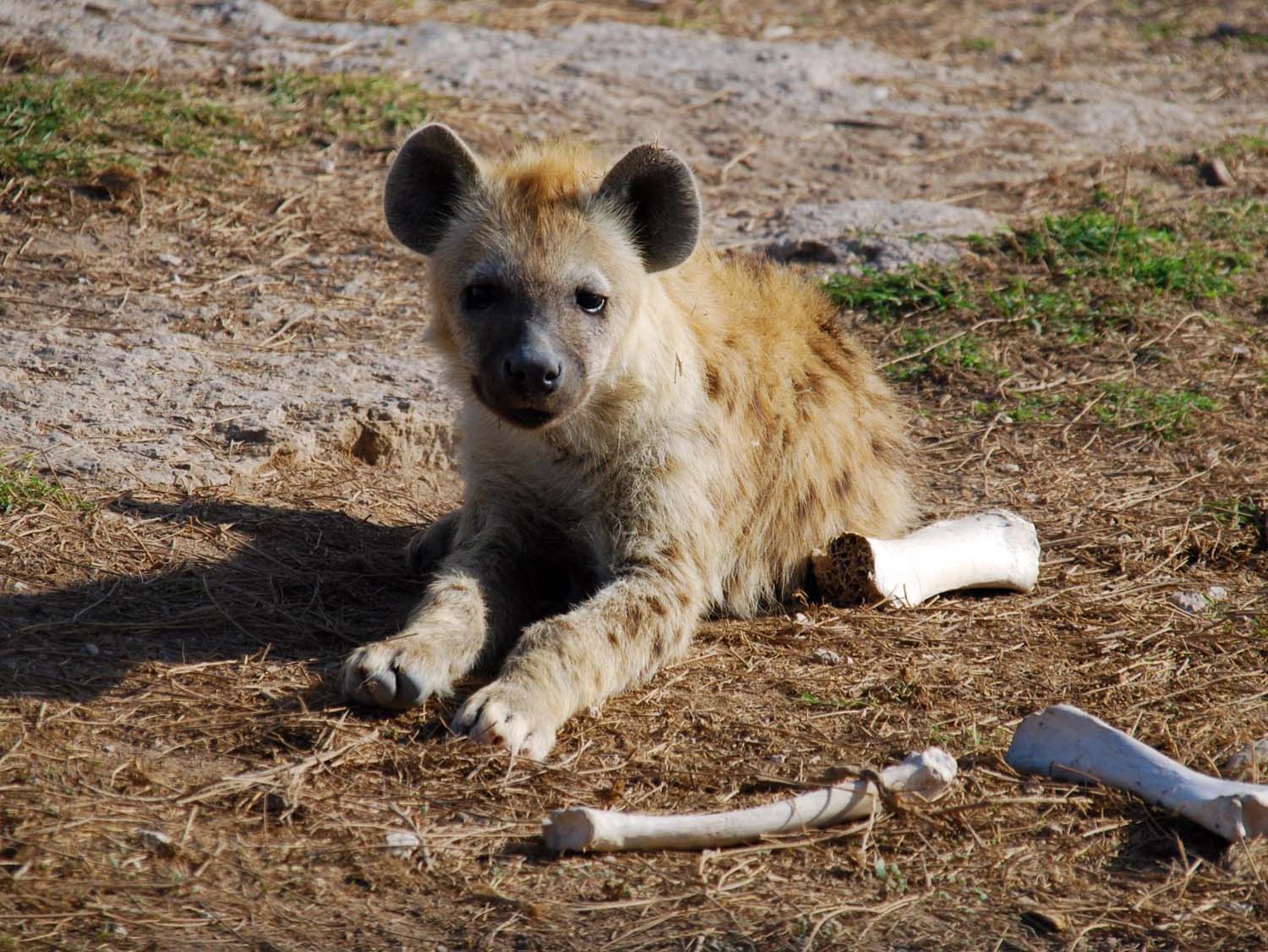 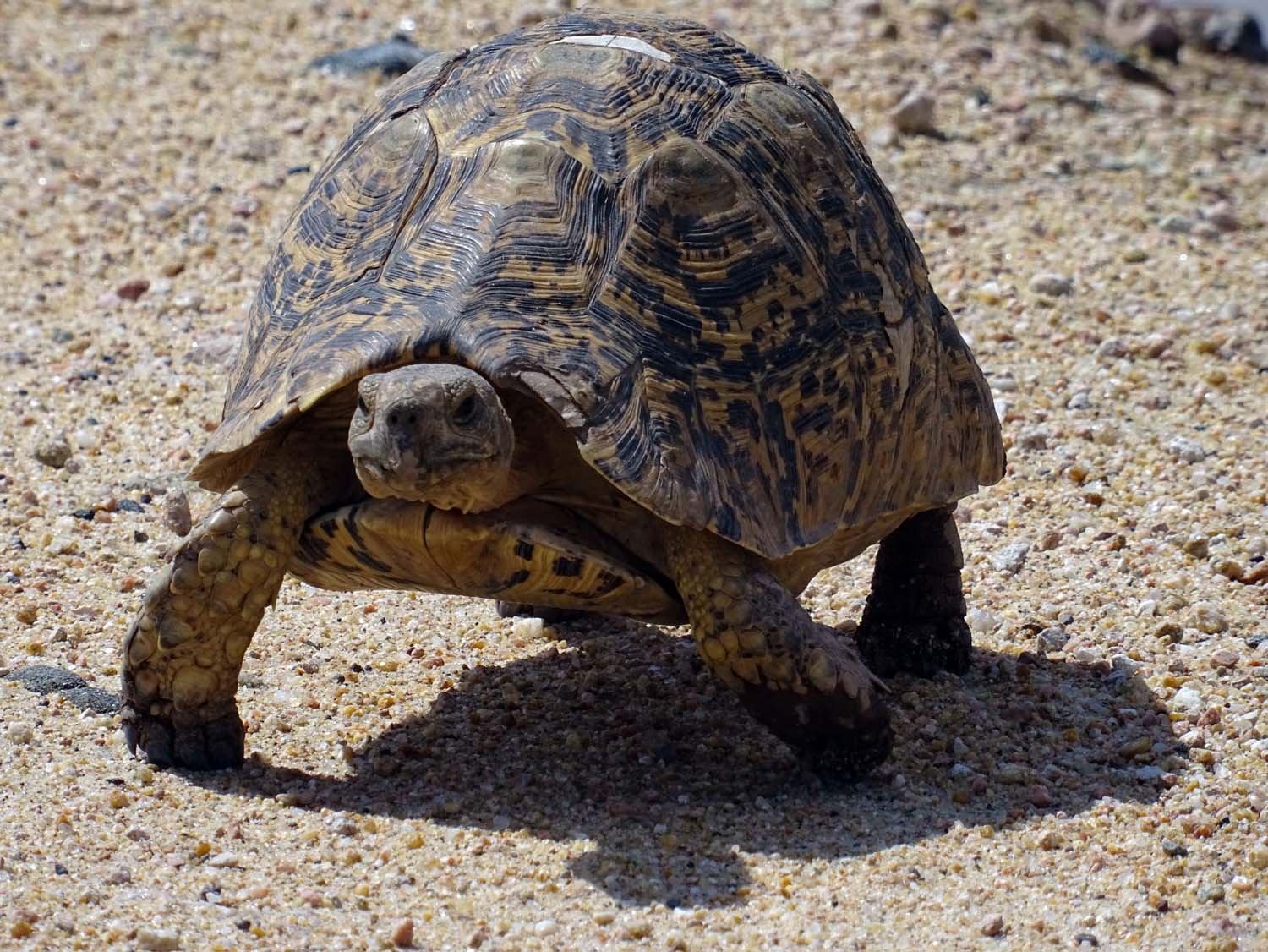 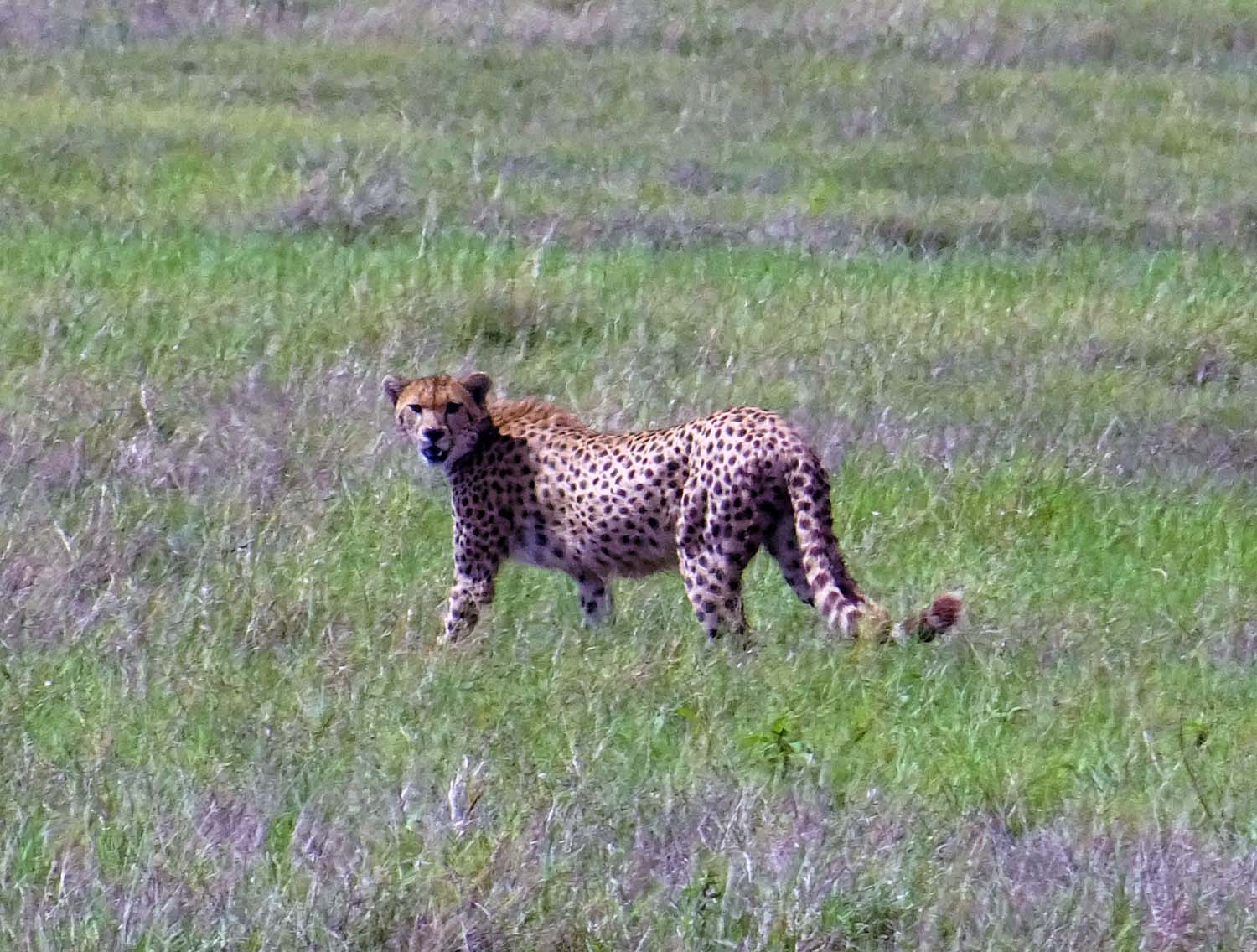 cheetah on the plains of Amboseli NP