Jon flew to Adelaide on Wednesday morning (very early) as he was invited to watch the stage in the corporate area, Jude flew over that evening. This time we stayed at the Crowne Plaza – a really nice hotel on Hindmarsh Square with friendly staff and no fuss about taking bikes to your room. There were many cyclists staying there as we would find out over the next few days.

Thursday morning Jon and I enjoyed a relaxed breakfast on Rundle St as Jon was feeling quite sick. At 10 o’clock he went off for his first meeting of the day and I walked over to pick up my jersey for Friday’s ride on Vic square – not open, I had to pick it up after 2pm in Norwood somewhere.

I then walked back to the hotel to meet a very pregnant Jen who picked me up so we could spend the day together and watch the start of the stage. Linda, Grace and Molly (Grace’s new little puppy) met us there in the park. We watched the stage start and then walked into Unley for a coffee until Linda had to leave. Jen and I went to Bliss – an organic cafe with fantastic food – for a relaxed lunch. The rest of the afternoon was spent with Linda at her place on Waterfall gully Rd. I hadn’t been there in years! Love the beach they have built in the garden next to the creek for the kids! 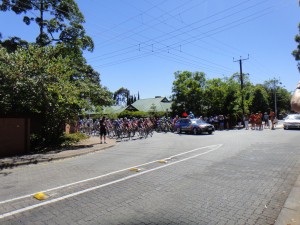 start of stage – watching with Jen, Linda and Grace

Linda dropped me off back at the hotel just as Jon arrived home too. The plan was to meet for a pasta dinner in Norwood and Rochelle and David came to pick us up. We joined Scooby, Cat, Dom, Claire, Troye, Tom (our old neighbour from Subiaco who now also works for Santos!) and Ben for some carb loading. Jon and I walked home, prepared for the ride tomorrow and went to bed early. 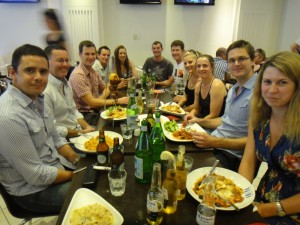 The next morning we were all meeting in front of the police station in Norwood as we wanted to leave a little earlier than the official start to avoid the usual chaos. Rochelle, David, Tom and Ben were late and Mark and Julian decided they wanted to cross the official start line. That left the little group with Scooby, Dom, Matt, Jon and me for a 6.20 start.

Just before the first stop we lost everybody due to some sprinting action, but we found Scooby again at the next stop. In the end we all met up in the Santos tent after riding under 6 hours again for the (official) 138km. The actual ride is a bit longer due to the non-racing section at the beginning. The ride was easy as we had a tail wind most of the way and the sun stayed behind clouds until we finished – perfect!

After some drinks and food in the Santos area we scammed our way onto the 13.30 bus and got back into Adelaide around 3pm. We waited about half an hour for our bikes to arrive and then rode back to the hotel for a well-deserved soak in the bath!

Ted, Saray, Krishnan, Mark and Ella joined us for a great dinner at the Taj something on Rundle street, followed by some beers at the Belgian Beer Cafe where Dimi, BB, Angelo, Matt, Karen and Nancy also joined us. 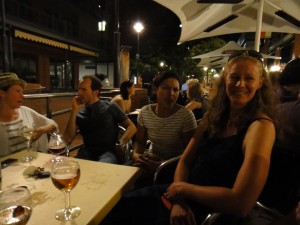 drinks in the Belgian Beer Cafe with Karen, Nancy, Angelo and BB 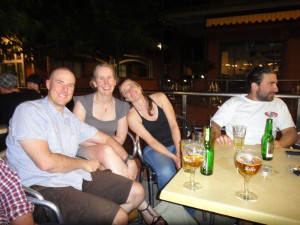 and Mark, Ella and Dimi (and Matt – not in the photo)

It’s awesome to see everybody again!!!!!

The next day Angelo picked us up and we drove to Aldinga Beach to watch the stage at Ella’s aunty’s place: Annie & Dick. Dick had worked for Porsche in Germany in the 60’s and 70’s and was involved with the racing team so Jon had some interesting chats with him! We watched the first lap from their drive-way, the second at the hill / bend in the road a few minutes walk up and the 3rd lap again from their drive-way as we had decided to quickly drive to Willunga Hill to watch the last 2 laps there… In between laps we enjoyed the views, catching up and some great food. 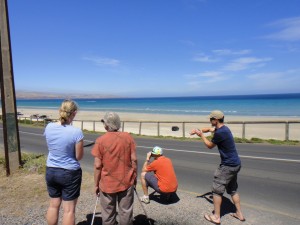 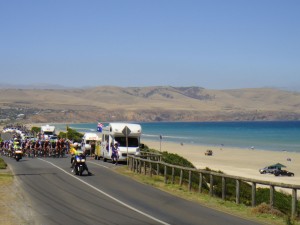 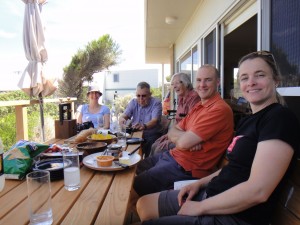 chatting and food in between laps 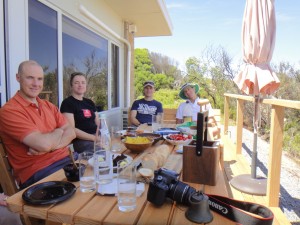 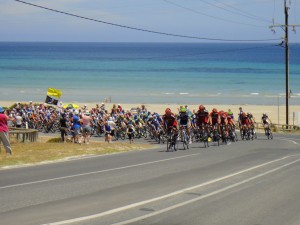 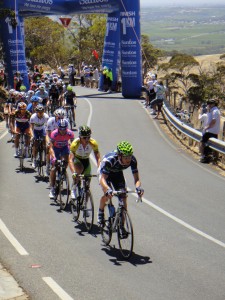 lap 4 on Willunga Hill – 1km from top of the hill 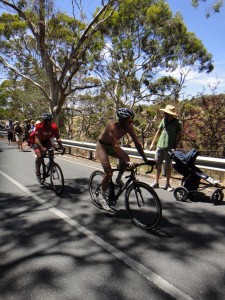 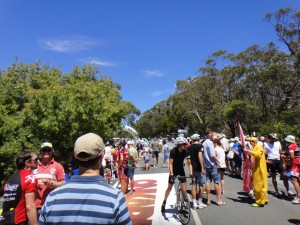 great atmosphere on the hill 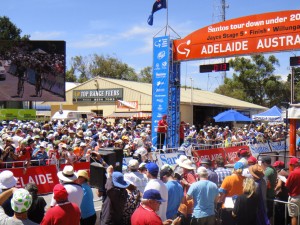 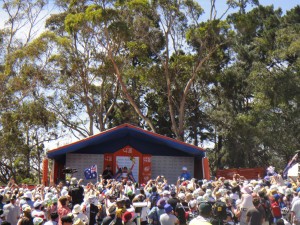 Simon Gerrans takes the lead in the TDU 2012

Angelo’s car didn’t start so we jumped into Mark & Ella’s car. We were lucky as we found a place to park on the highway, about 1km from the top of the hill. We watched the first hill lap at the 1km to go sign and then walked up to meet Rochelle who had some bracelets for us to get into the Santos corporate area. We met up with David Knox, saw Eddie Merckx and watched the finish with Tom, David, Ben and Rochelle. So excitign with GreenEDGE now leading the overall classification with 0 seconds on Valverde!!! 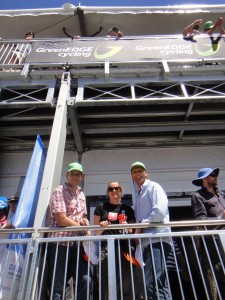 with Tom and Ben in the Santos corporate area

We visited the bike expo on Vic square with Angelo and then had dinner with Scooby at Namaste – our favourite Nepalese place – followed by some beers at the Earl of Leicester. 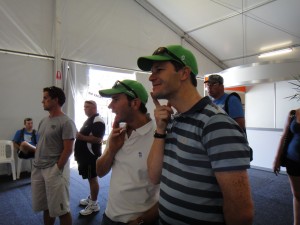 The next day we had a nice and relaxed breakfast with Scooby at Continental – great food! And then walked to the start of the last stage with Cat and her friend Nina. We couldn’t stay and watch so we left after watching the start of the stage. Our maxi taxi was late (as usual), but we got to the airport on time and watched the stage in the lounge whilst getting some lunch. Unfortunately the boarding call came before the end of the stage so we had to watch the final minutes on a small television about 20 m away through class barriers after we had checked in. We thought we saw Greipel cross the line first, followed by a complete peleton which meant GreenEDGE Simon Gerrans had won! Awesome, a great ending of a perfect weekend! 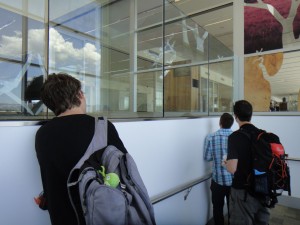 watching the finish after boarding… spot the small tv we had to watch it on!