We’ve seen them before, I guess most of you have seen them before, but wait until you go to the Yuanyang rice terraces! We had never seen so many rice terraces before in our lives. The area is quite hilly and they have basically created terraces from the valley floor to the top of the hill. Jon counted 138 layers of terraces on one of the hills and this goes on for 12.500 hectares. 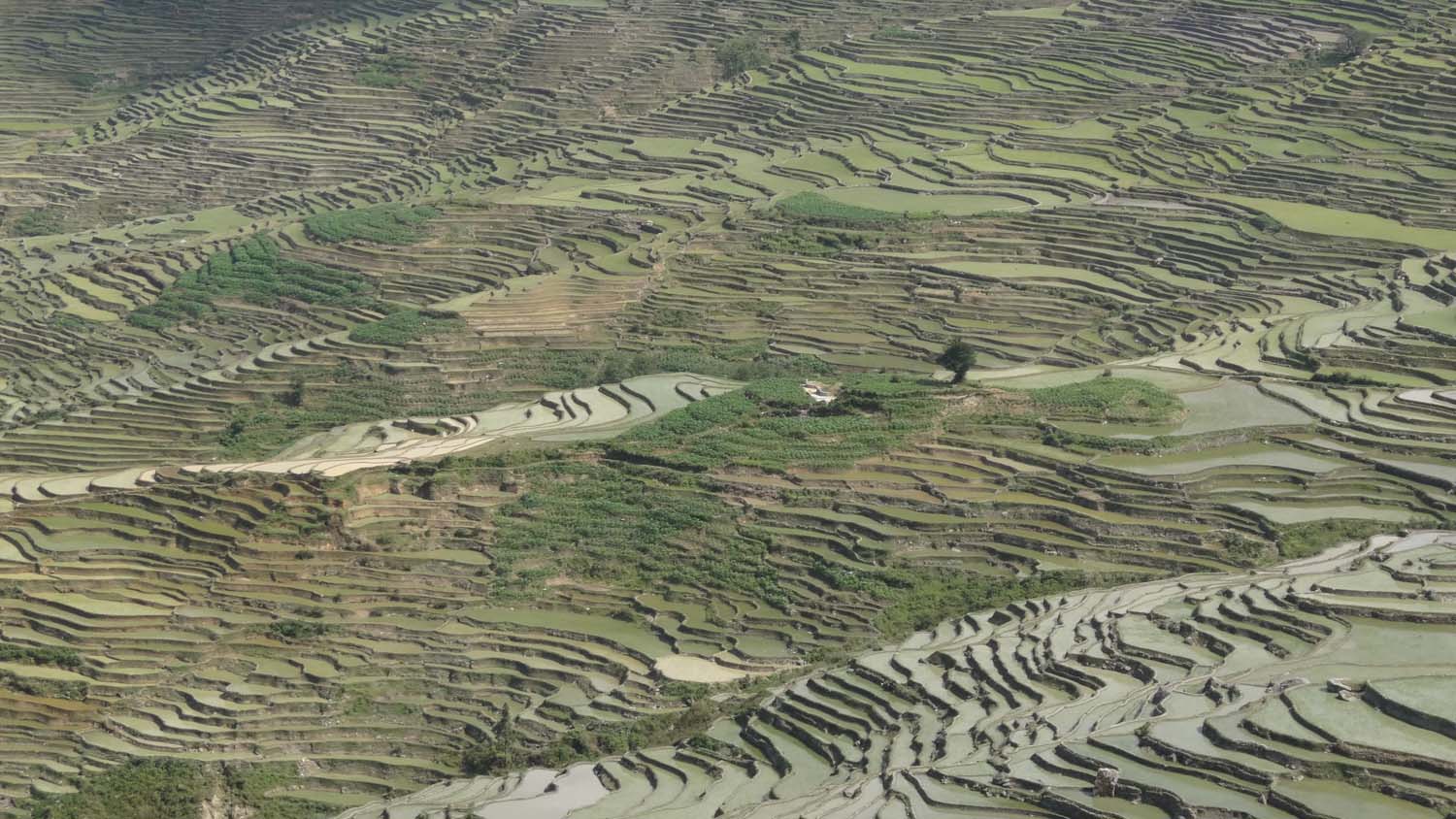 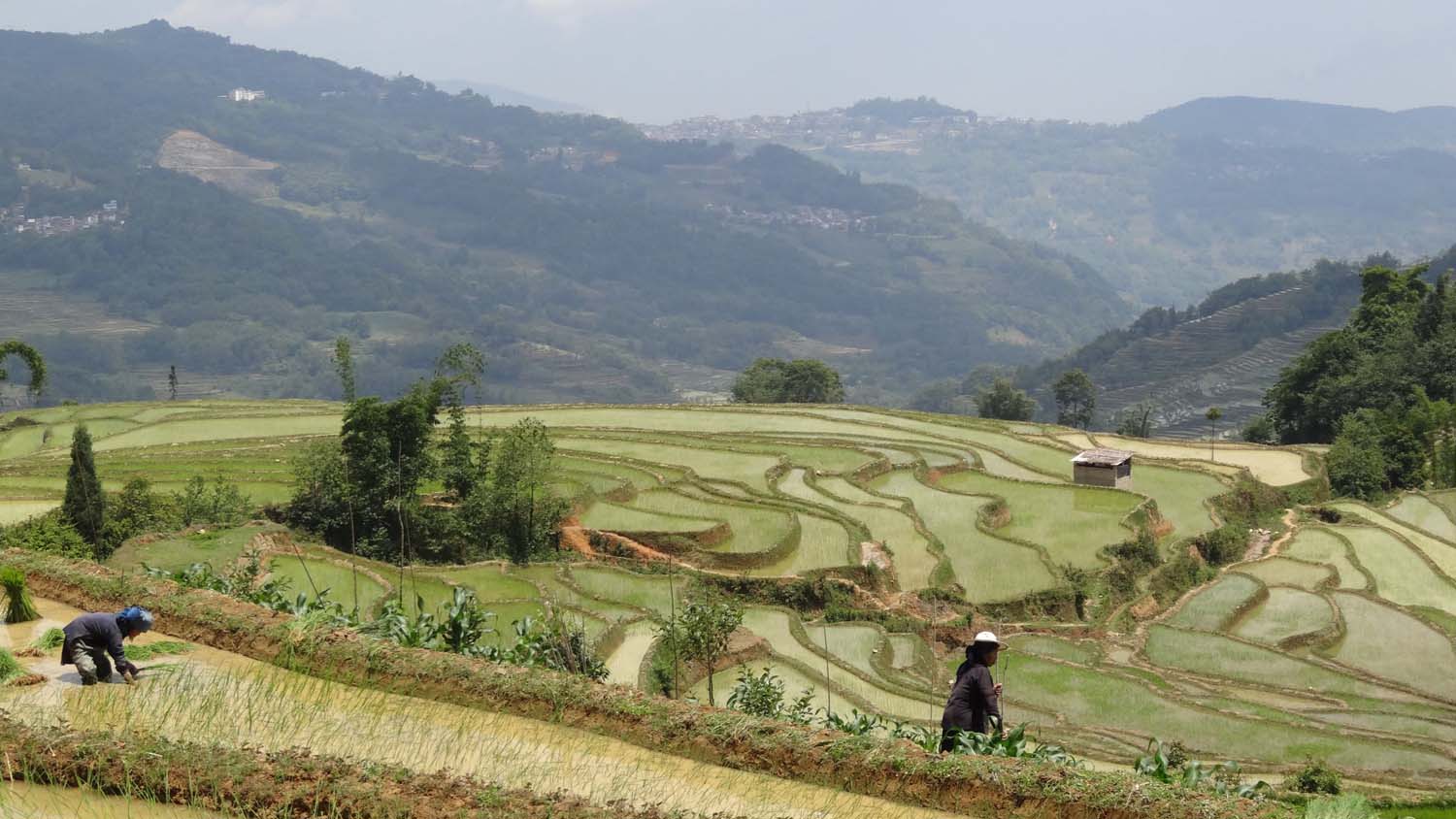 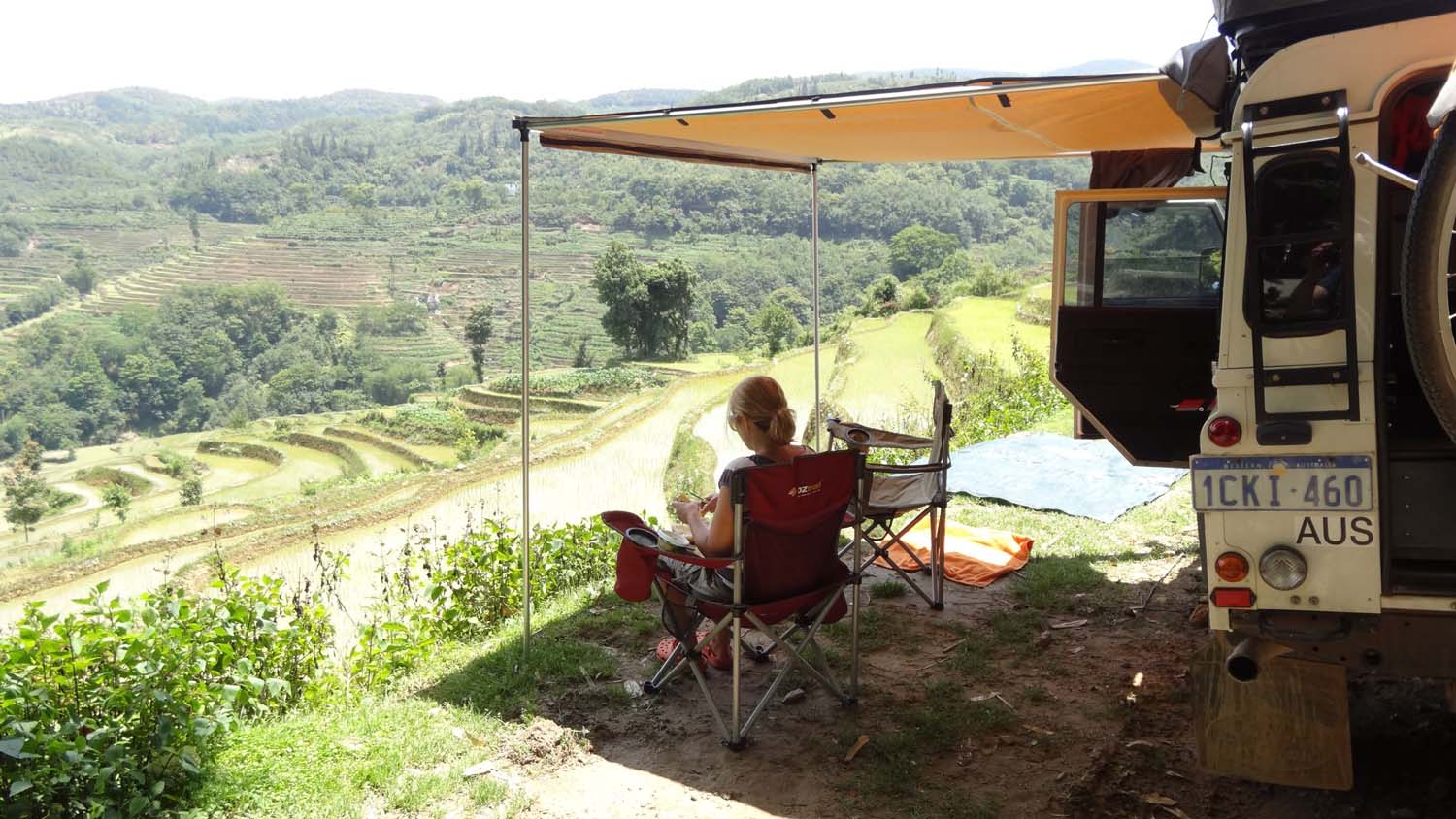 lunch with a view and Chinese music 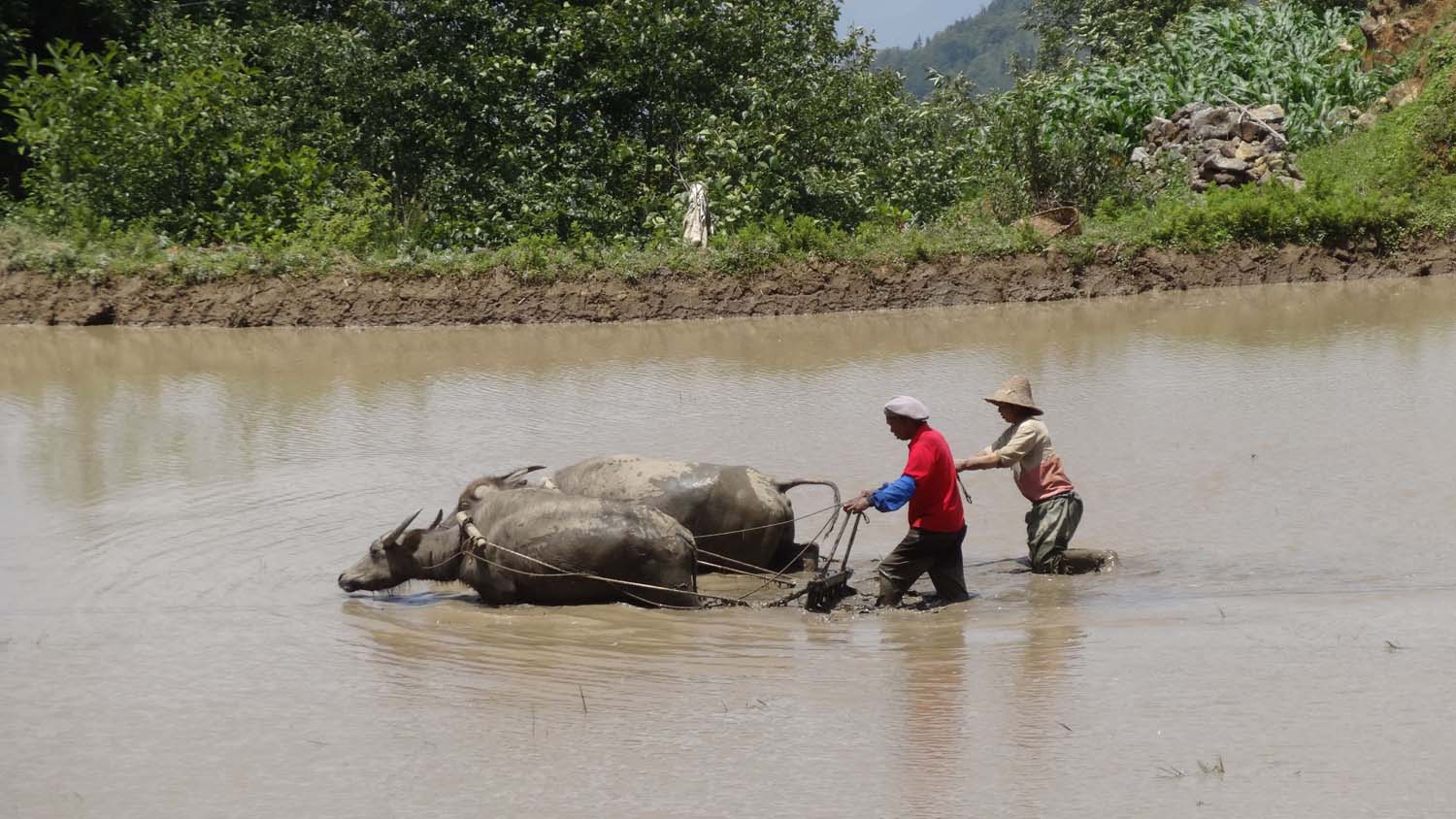 plowing is still done with the help of water buffaloes 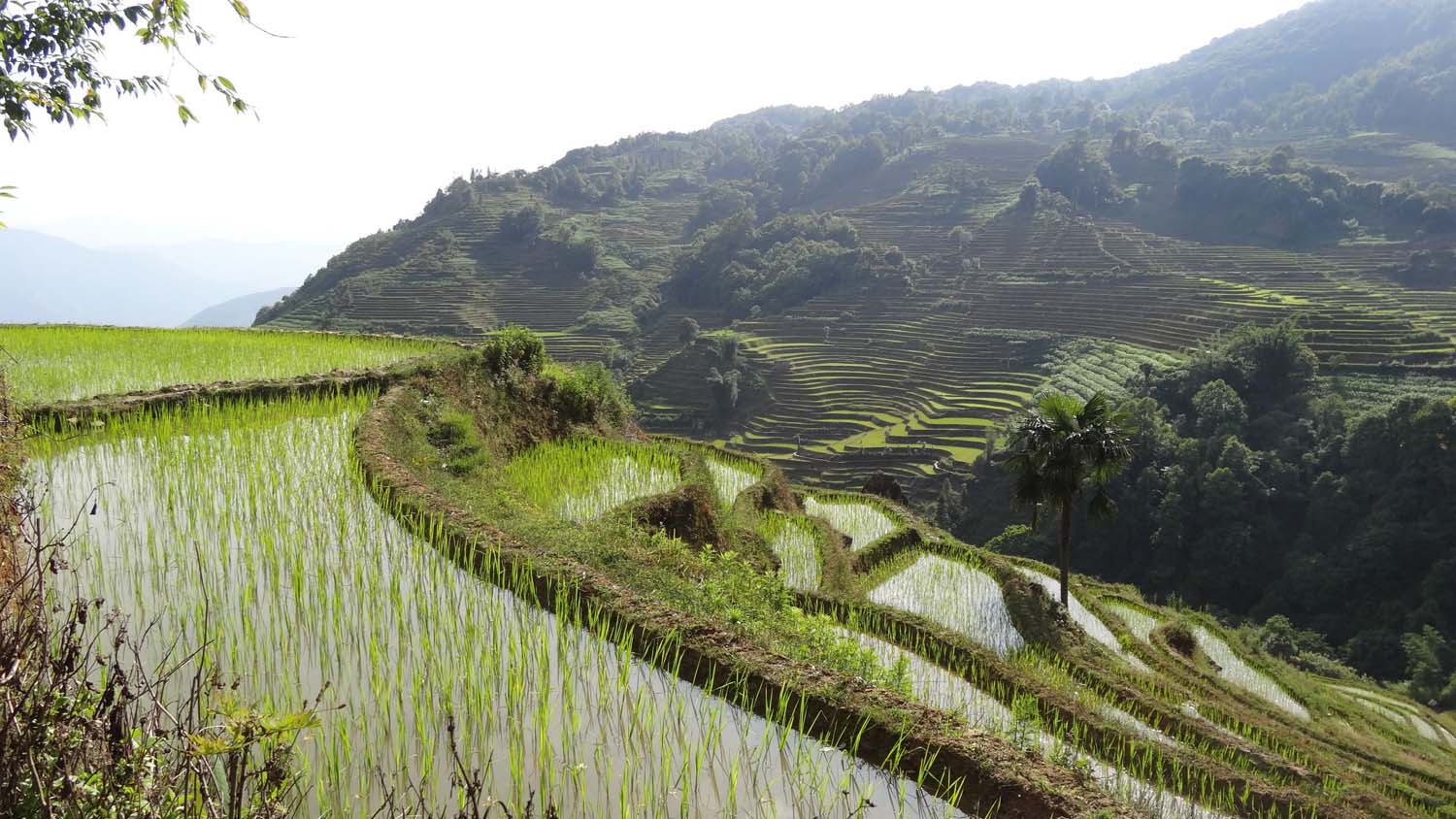 no comment, Jon just liked the photo so wanted it on the blog 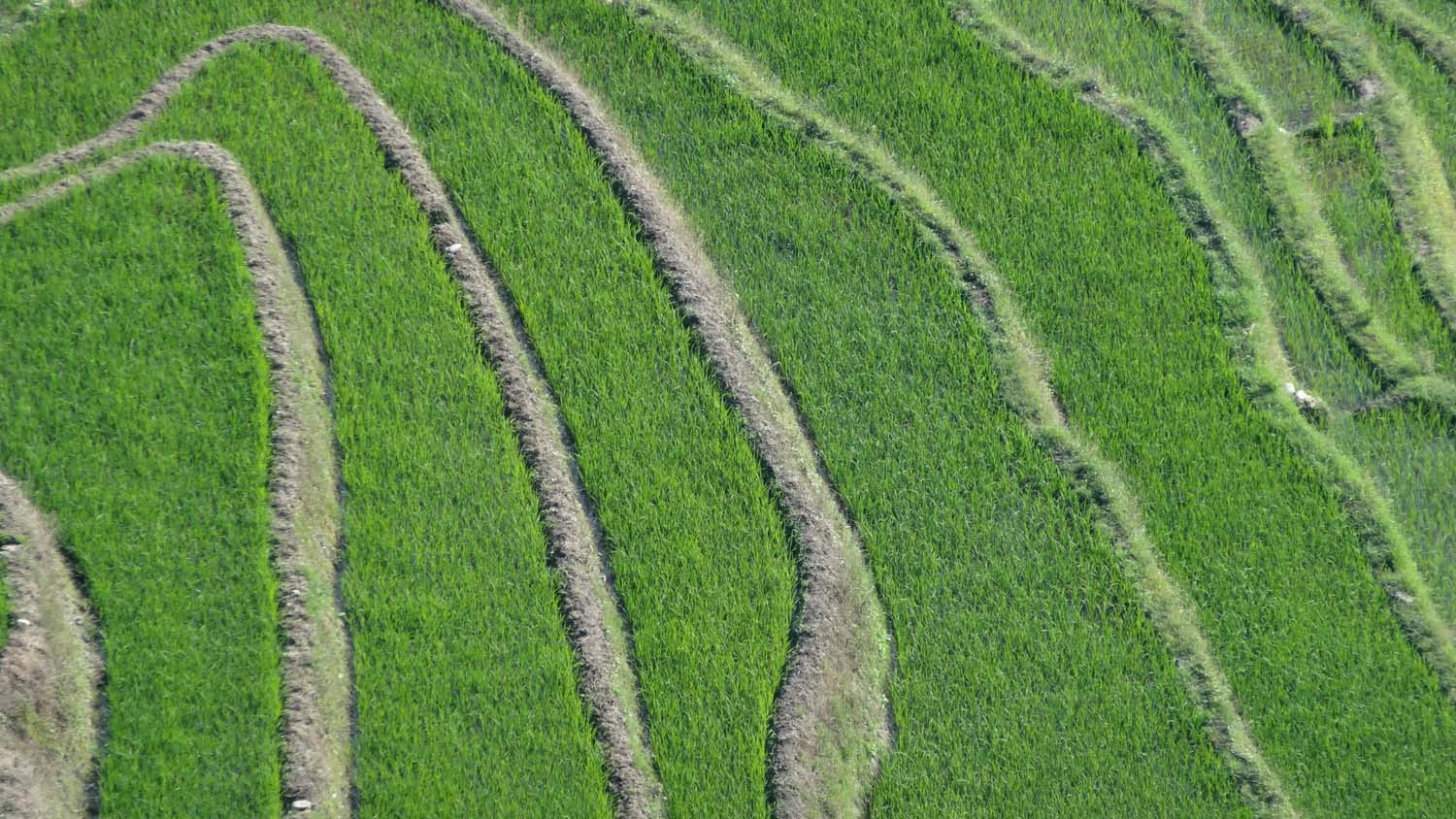 On top of that, in this area are still a lot of people wearing traditional dress, which is why they probably got the Unesco World Heritage status for the whole area. It also means the entry fee is high, 100 yuan each ($15) just to be allowed to drive on some public roads and walk to 3 lookouts. But, it was worth it. 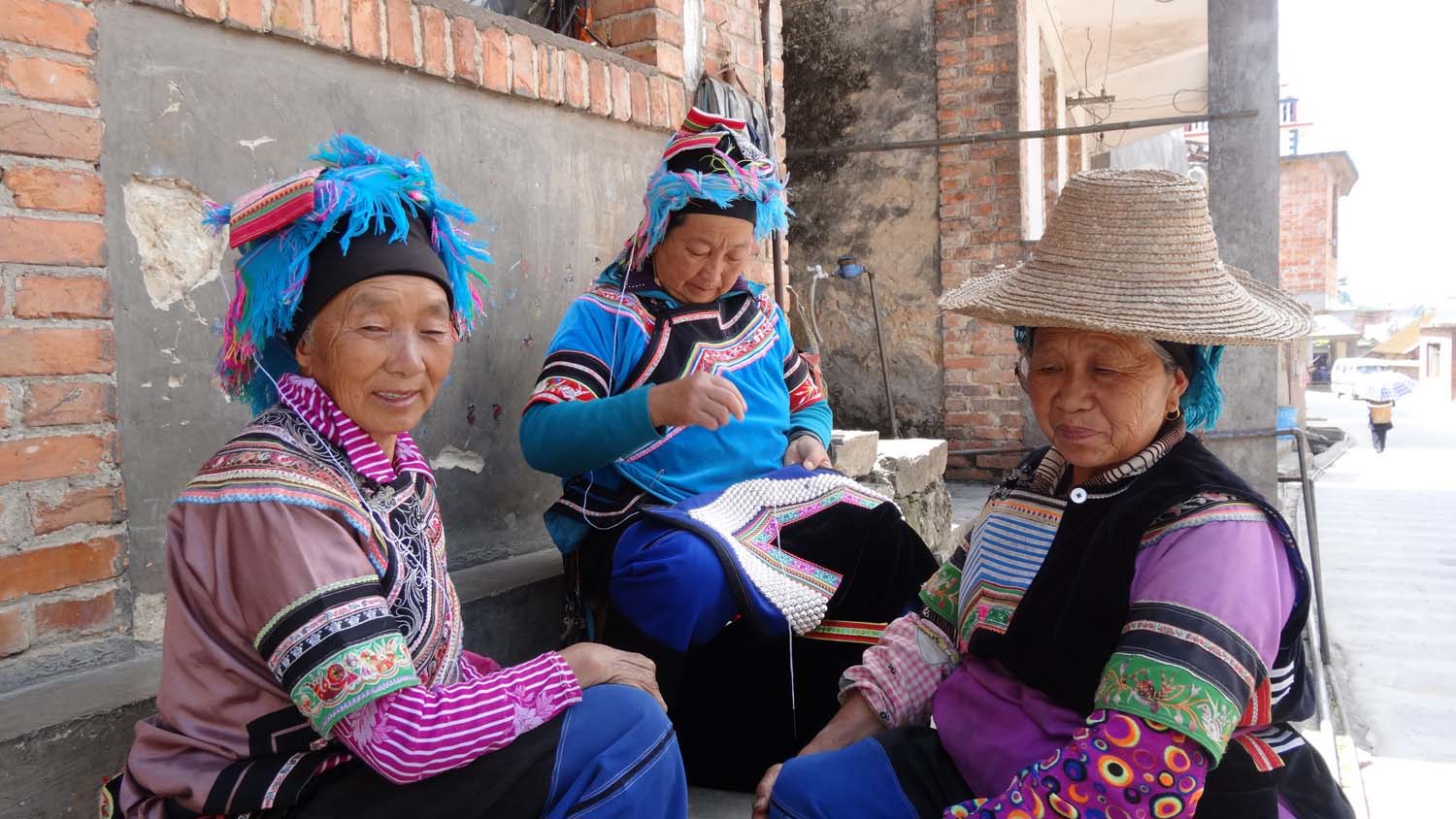 When we were driving through one of the villages we heard a lot of fireworks. We jumped out the car to have a look and there was some sort of procession happening with colourful flags, a band and a tuktuk with a few guys in the front chucking out large firecrackers onto the road. It turned out to be a traditional funeral for an important person, very impressive and very noisy. It was like being back in the Netherlands for New Year’s Eve. 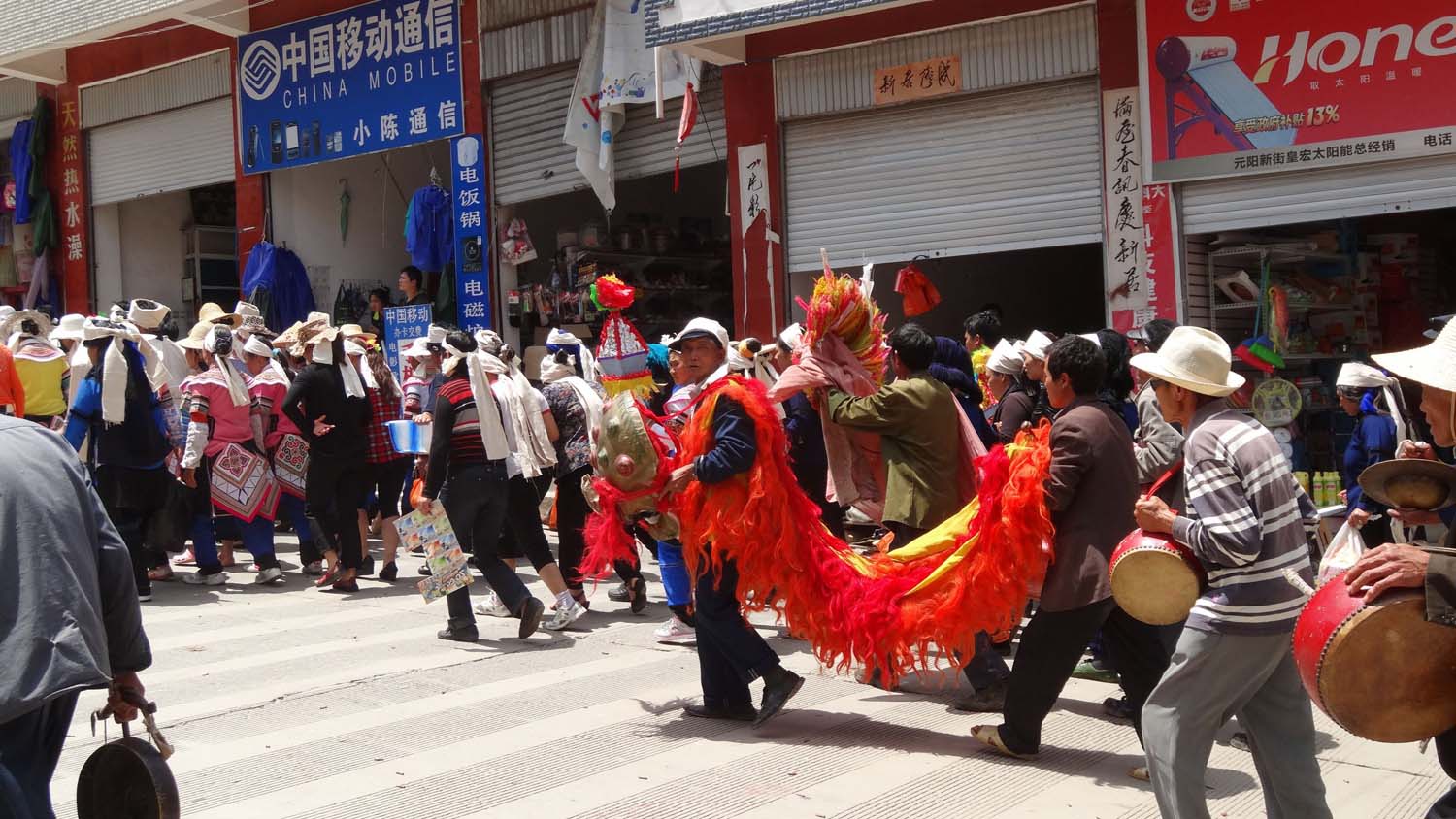 We visit another world heritage site, this one near Kunming, a small city for Chinese standards, large for our standards (6 million people). It’s called the Stone Forest and consists of lots of eroded karst pinnacles, creating an amazing maze of beautiful rocks so big it looks like a stone forest. As we arrived the evening before this became our campground as well.

Chinese people don’t do camping and there aren’t any campgrounds where we’ve been so far, so car parks are often a good choice for us. This one was pretty good as they kept the toilets open for us, turned off the massive flood lights in the area where we camped, we didn’t have to pay for the overnight stay and Jon found himself a Magnum icecream in the restaurant before it closed. His first one in China (no guesses on how big his grin was).

We found a lovely spot in the corner with views over the karst formations directly from our tent. After breakfast we walked over to the ticket counter, a massive building set up for thousands of people, I guess it gets busy here at times. Lucky for us it doesn’t seem to be too busy.

The Chinese love to use massive golf carts for everything, but we decided to hop on our bikes instead and see if we can get them inside. From the ticket office it’s about 3km to the entrance and, surprise, surprise, we are allowed to take our bikes inside! We cycle around on the ring road until we see the entry we want and decide to ride down this narrow trail too. When we get to the Sword Pond we park the bikes and walk around. It’s pretty impressive and fun to walk around through the maze of rocks, trying to loose our way and decide where we go next. 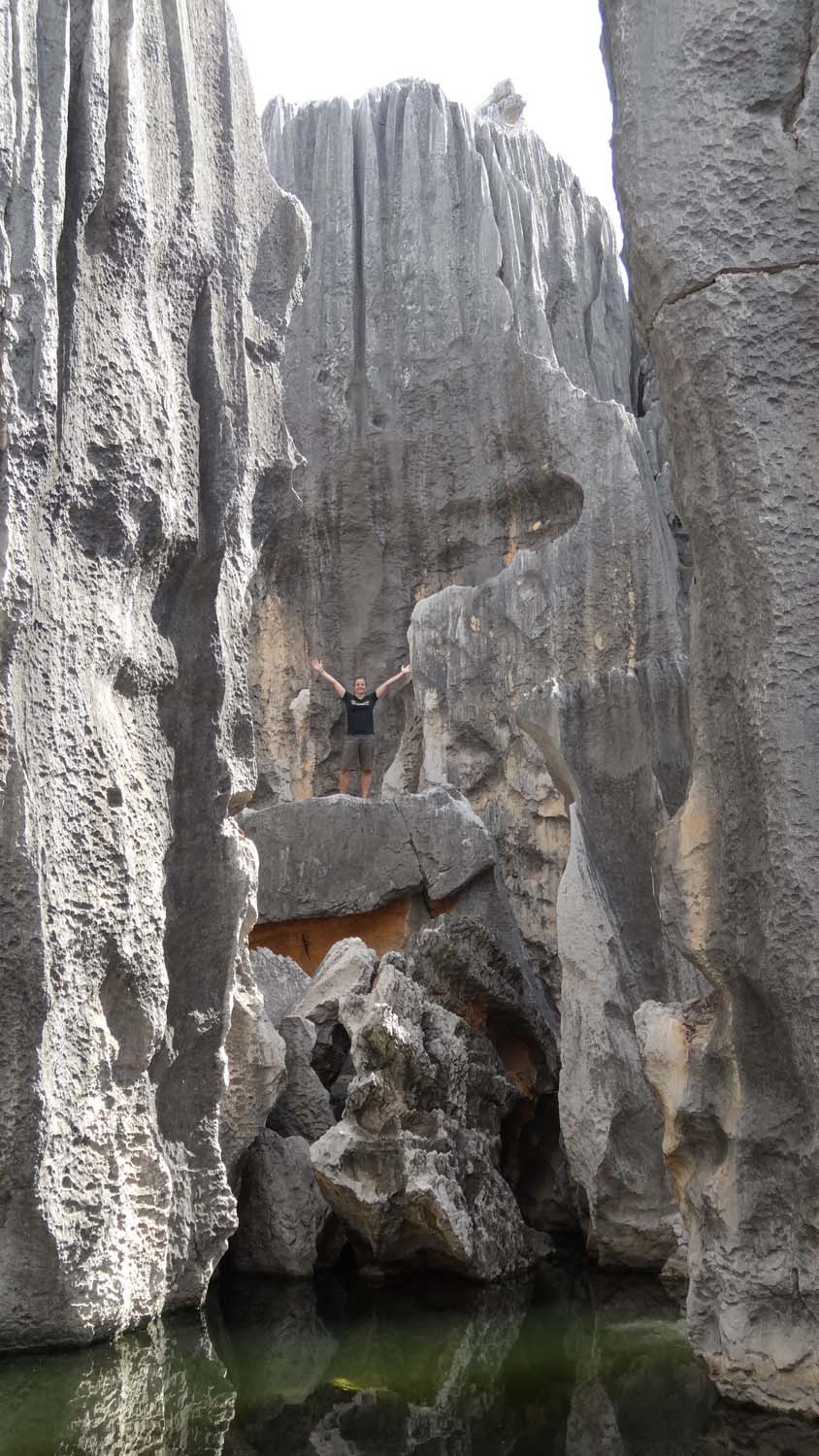 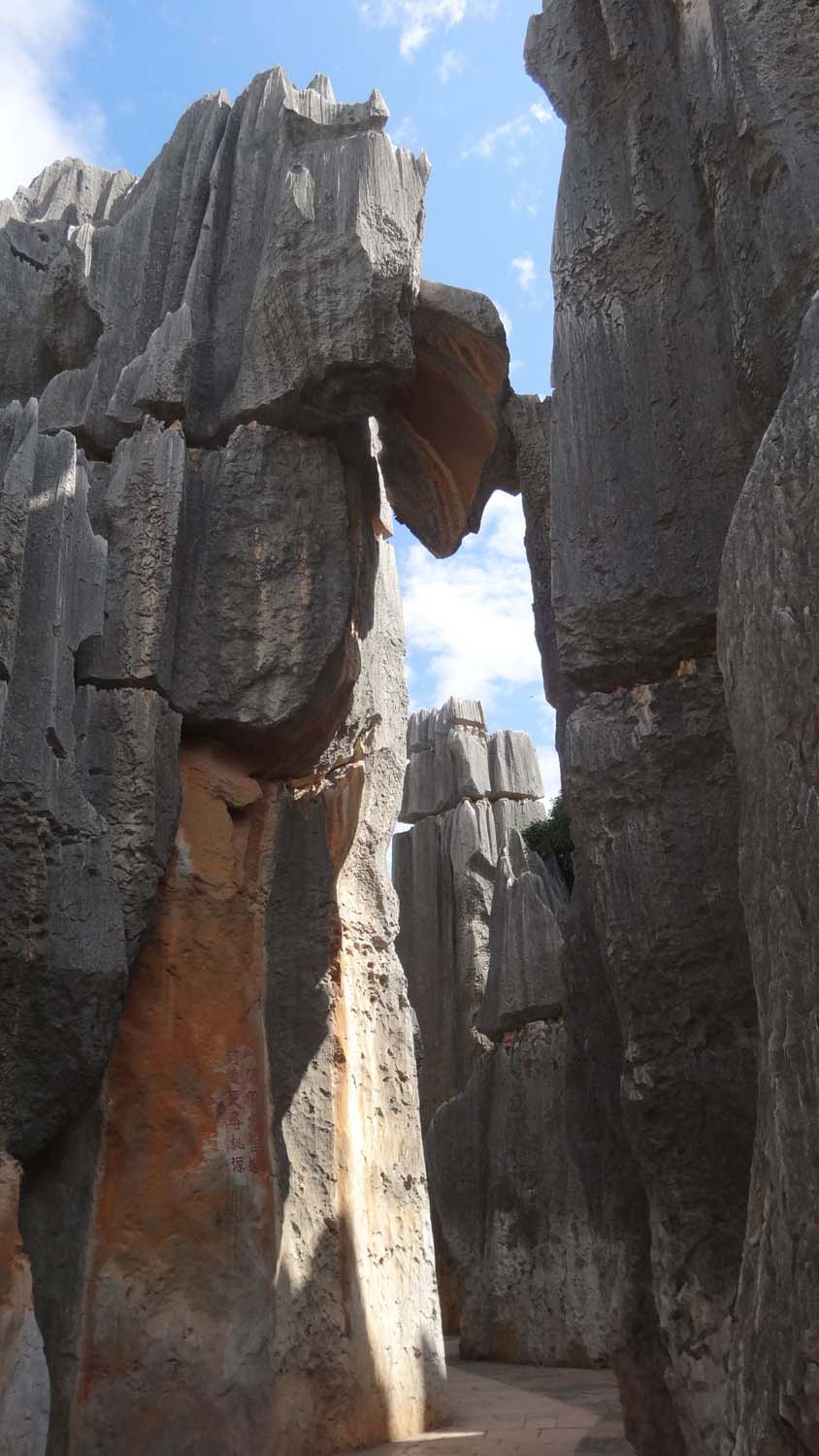 Stone Forest is a huge maze of cool karst formations 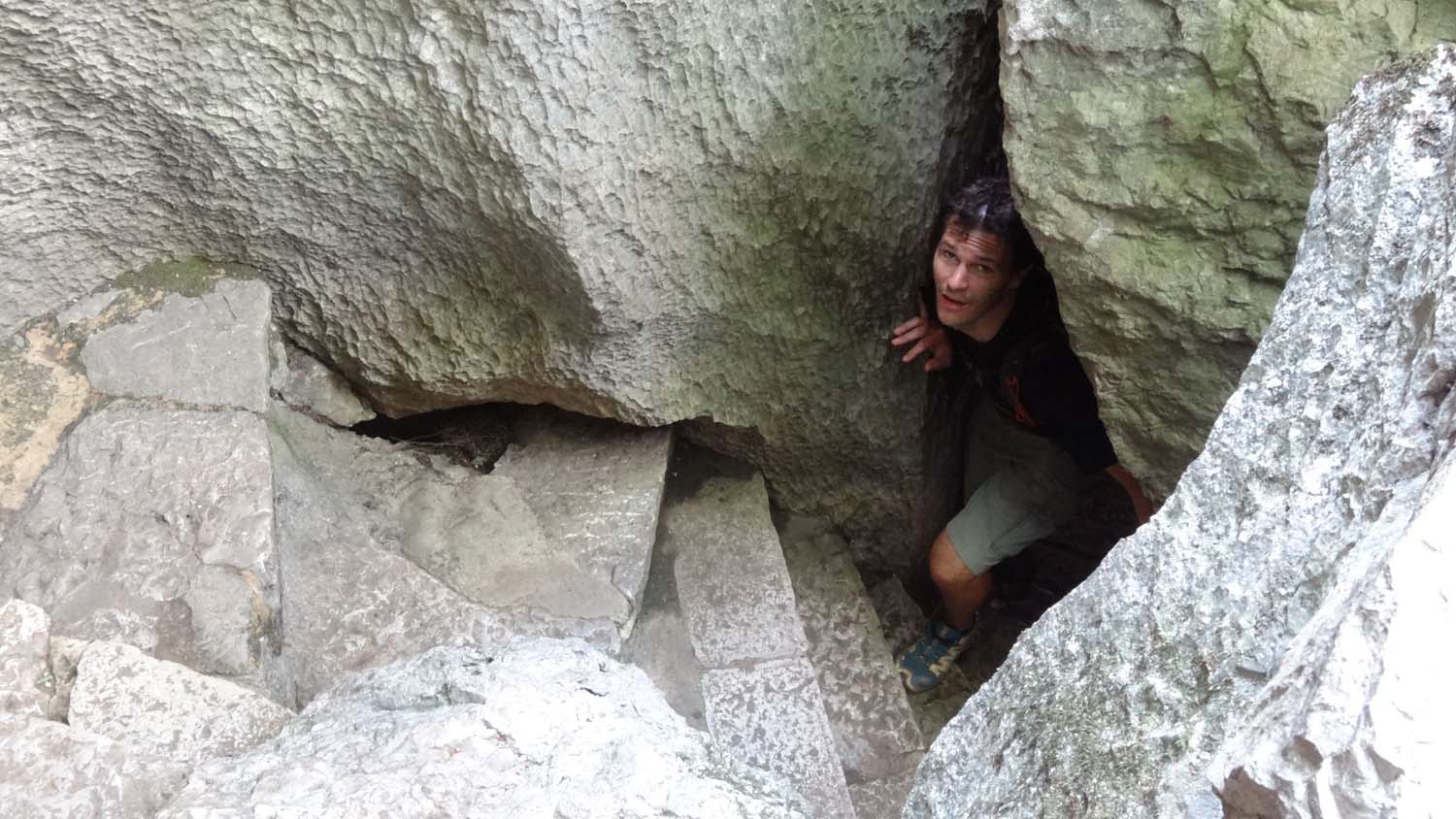 off the beaten track there are some great paths

wonder if they have an uncivilized guide service as well… 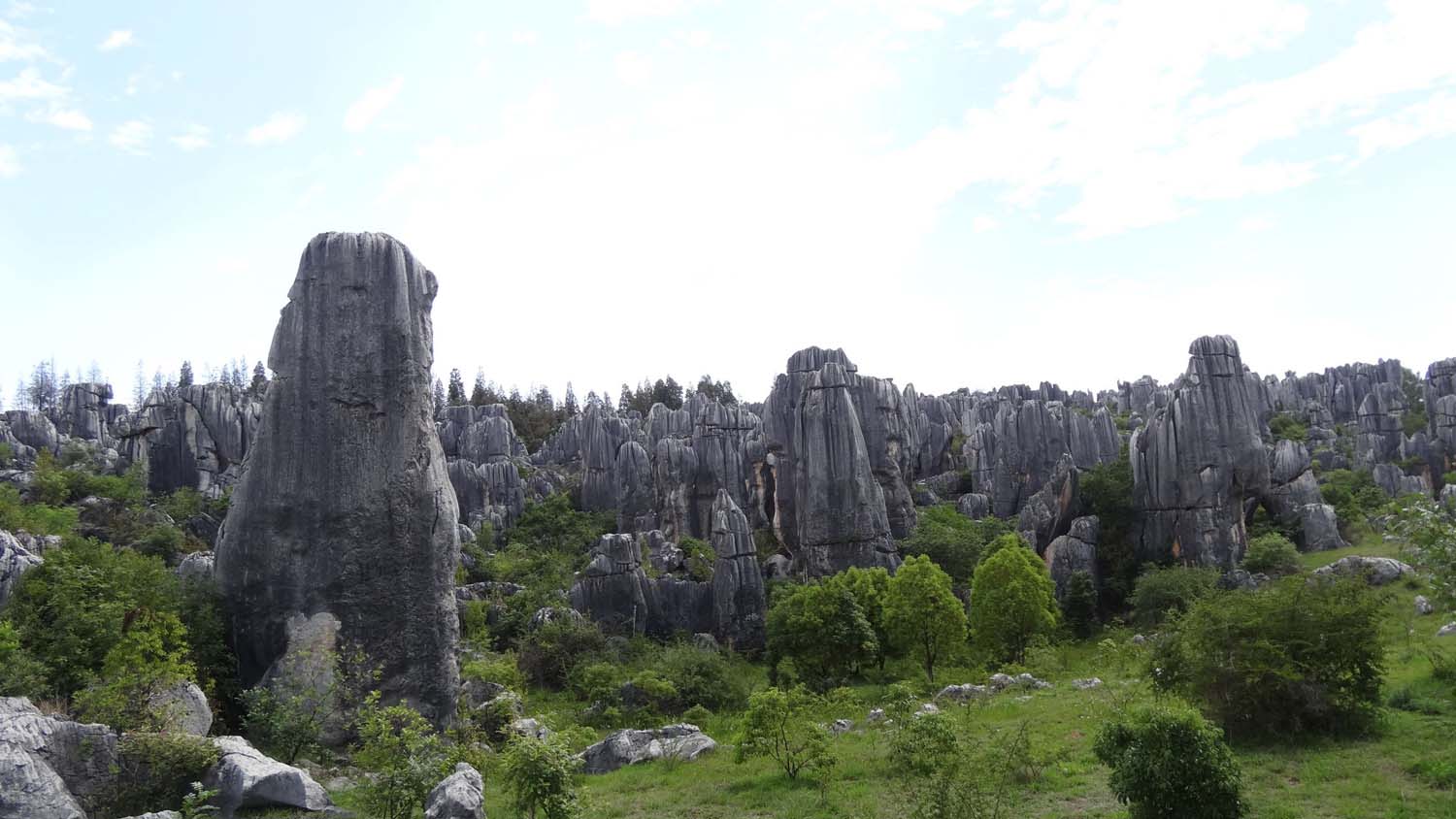 great place for a rogaine

For a few hours we have fun running around the place, avoiding the tour groups and crowds (which is surprisingly easy), until it is time to find our bikes again. Thanks to our superb navigational skills we have no problem relocating them and decide to take a shortcut back to the ring road. Clayton would have been proud of us, it was shorter and a lot more fun, but it definitely didn’t save us any time!

There were lots of steps up and down and some through rather narrow sections, the handlebars were a bit too wide in some areas, but we made it through – eventually. And, I must say, the views near the end were worth it. 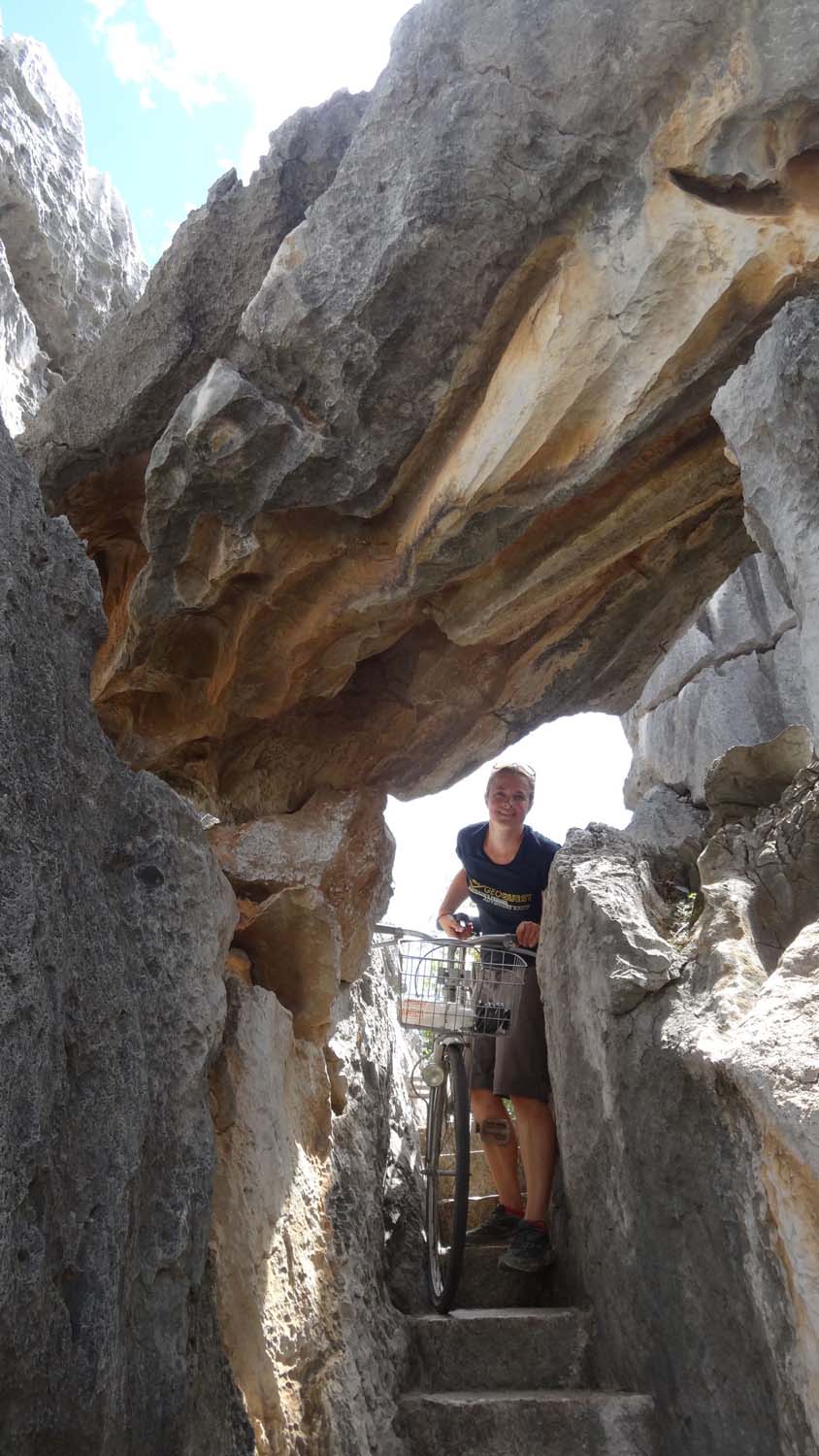 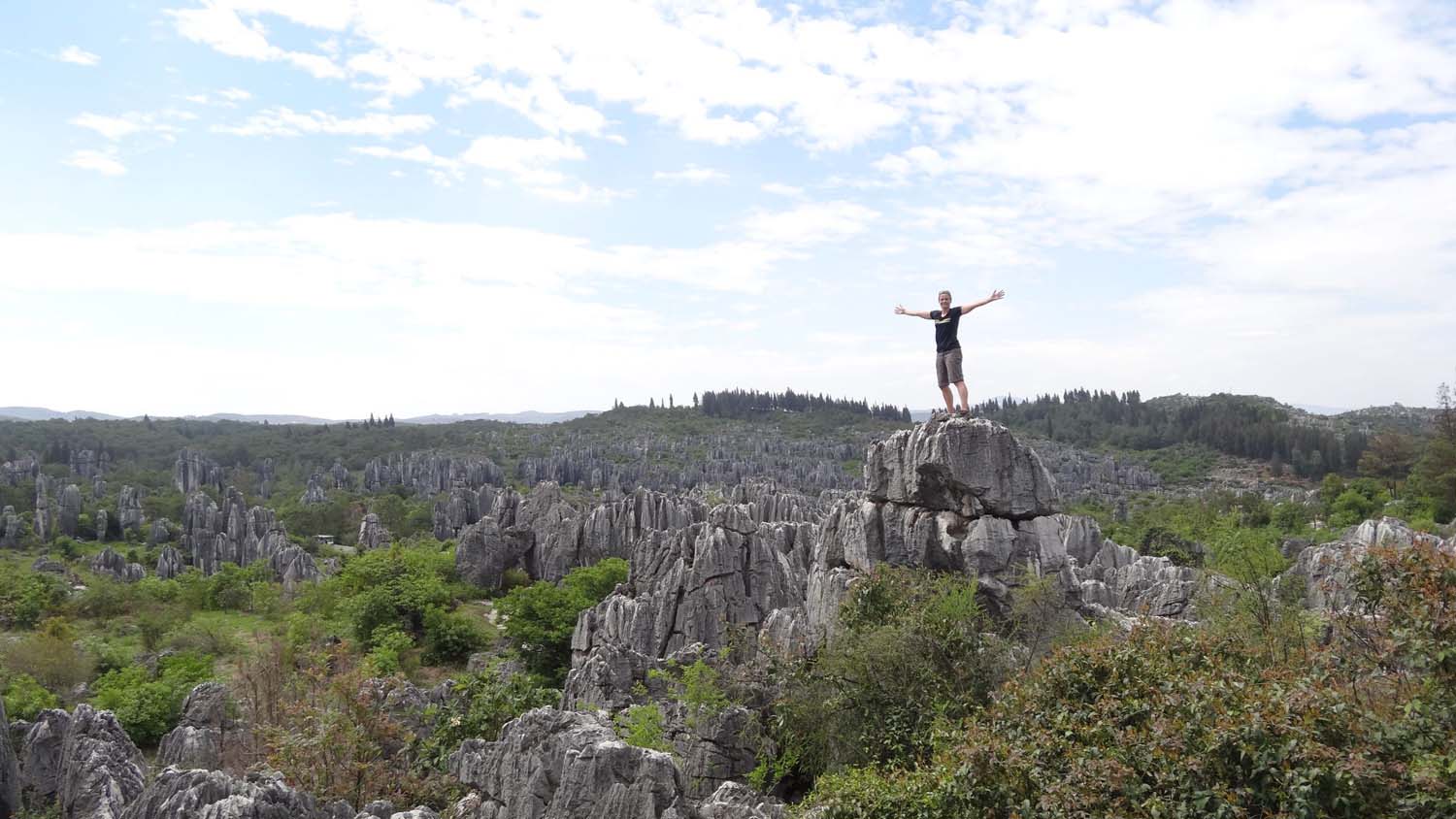 on top of the world

Our last stop was at some ancient rock paintings, they were carbon-dated back to AD 200, pretty impressive. We reckon we can see an alien in the middle. 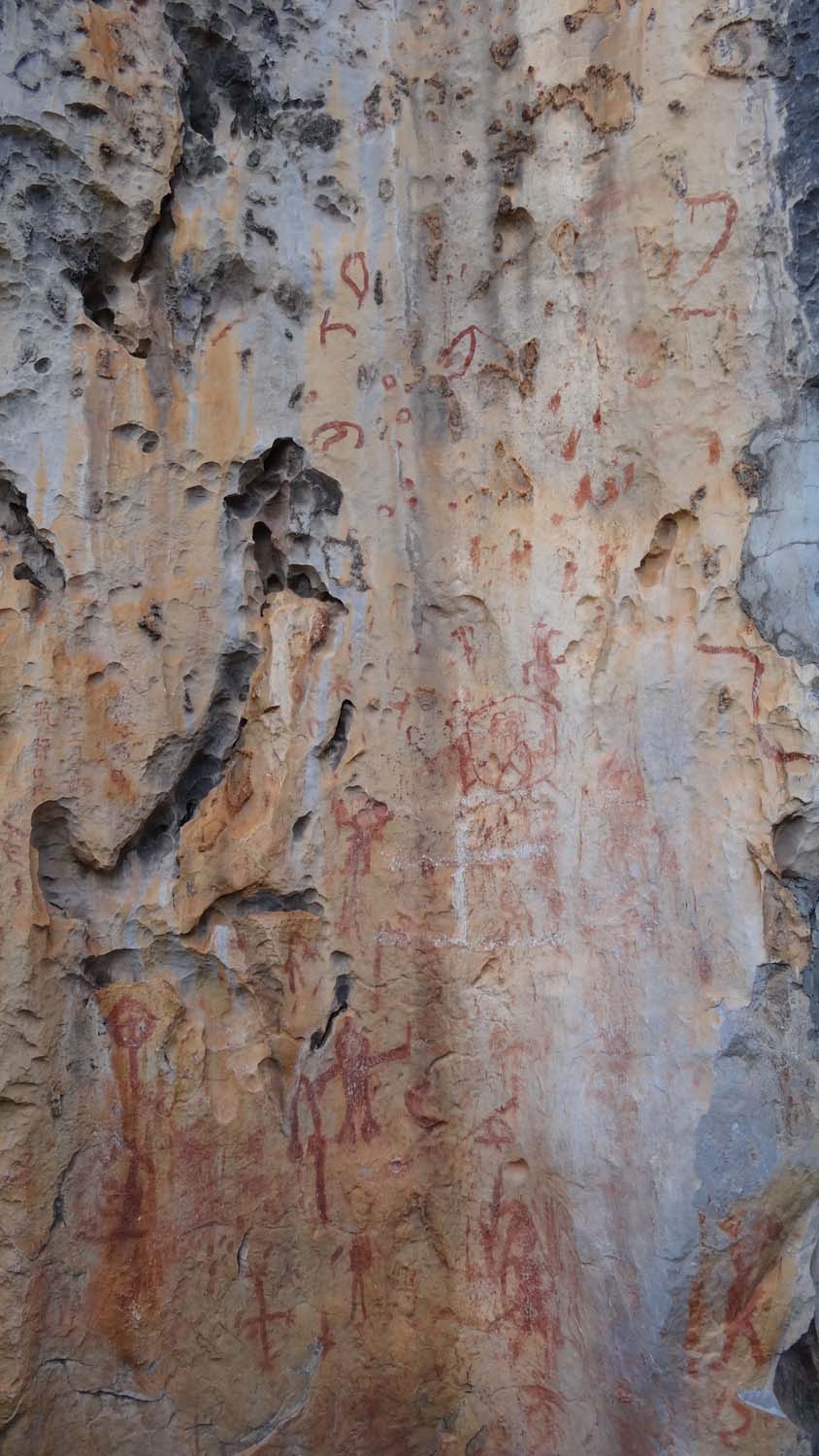 The list of all Unesco World Heritage Sites we visit in China: