The wild west of Tanzania

Katavi National Park. Remote. Wild. Unspoilt. Pure. Rarely visited. Remote. Spectacular scenery. Off-the-beaten track. Rugged. Remote. Isolated. Untouched. Abundant wildlife. Birding paradise. Did we mention it is quite remote? And difficult to get to? But stunning, and worth the effort, definitely worth the effort. One of our highlights among this year’s safaris. 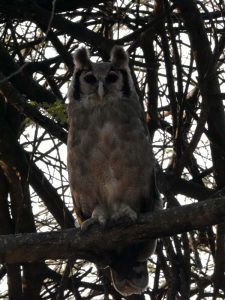 a huge verreaux’ eagle owl looks at us curiously 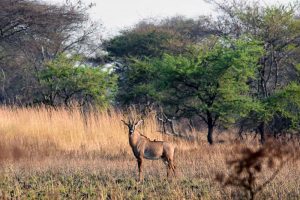 roan antelope, there are only a few places in Tanzania where you can find them 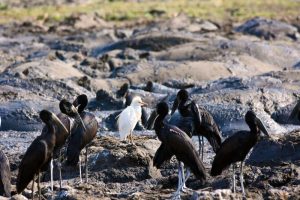 how do these gorgeous cattle egrets stay so clean among all the mud? 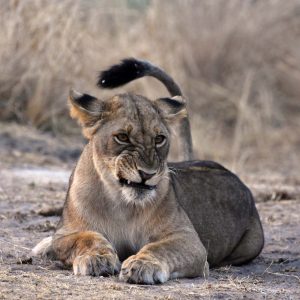 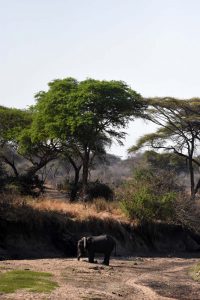 this elephant has dug a hole in the dry, sandy river to get to the water table underneath for a drink. Smaller animals like baboons will use the hole he has made to drink as well 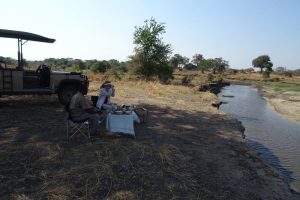 breakfast next to the river, make sure you always keep your binoculars handy 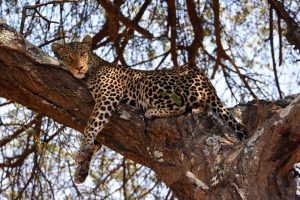 lepard relaxing in a tree right next to the airstrip 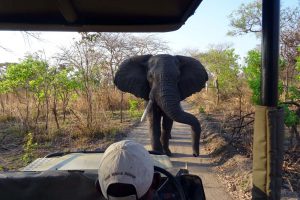 a huge bull comes to investigate our car 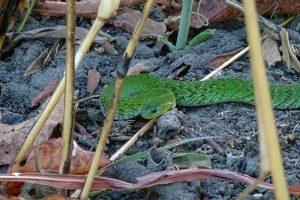 Hamza, our guide, spots a night adder crossing the road 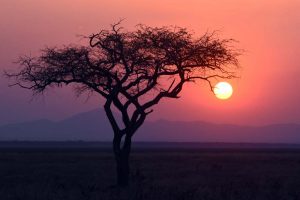 a spectacular sunset in Katavi NP 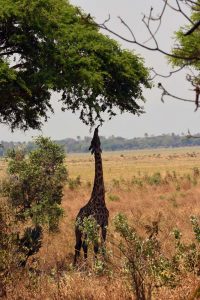 even the tall giraffes struggle to reach the juiciest leaves, they create the shapes of the trees by their ability to reach parts of trees

Katavi NP is Tanzania’s third largest national park, with nearly 4,500km2 set aside for the animals in their different habitats. It gets a fraction of the visitors the rest of the country gets, especially when compared to the Serengeti and the other parks in the northern circuit. Katavi could be considered part of the southern circuit, but in reality even people venturing away from the popular and busy north, hardly ever visit Katavi NP. But they should, and we were mighty glad we did. It is located in the far west of Tanzania, not quite reaching Lake Tanganyika. It is a place we had wanted to visit ever since we arrived in Tanzania. 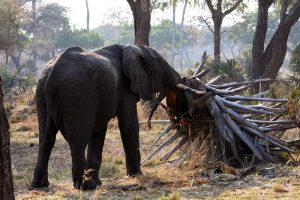 this elephant pushed over the palm tree and lifted it like it weighed nothing, he was after the moist and soft inside 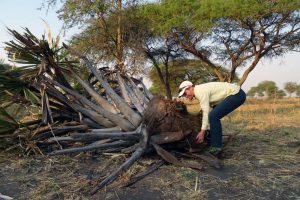 Jon trying to lift the tree the elephant knocked down, it didn’t move an inch, not even when Hamza joined him to try

To get there we had to fly to Arusha first. The next morning we continued from Arusha with a small Cessna caravan via Kogatende, Seronera, Tabora, and Ruaha NP, to our final destination Katavi NP. Finally we were there. 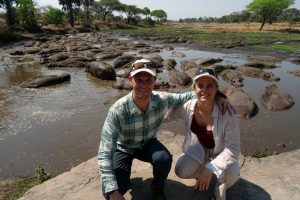 Jon and Jude in front of a bloat of hippos, all precariously living closely together as the river has pretty much dried up 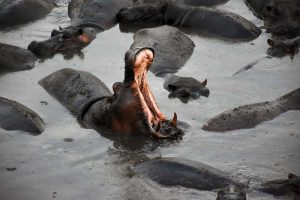 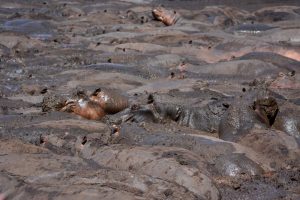 a bloat of hippos, hard to see where one ends and another begins… 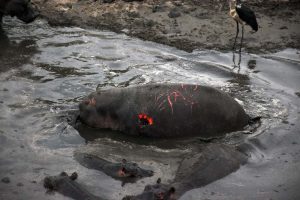 this is what happens when so many hippos live in a small, confined space when water is scarce, fights result in horrendous wounds

We liked the day drives, but what we really loved were the night drives. As always we had brought our ay-ups, excellent mountain biking lights that pack enough punch for spotting. When driving around in the dark, we would shine our torches sideways, picking up a lot of the eyes. The main spotter was usually focused on the area in front of the car and we would pick up many of the smaller animals on the sides. And that’s the ones we were most interested to see. 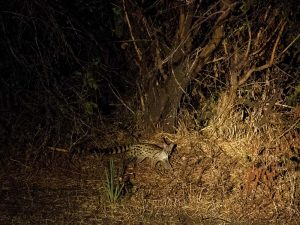 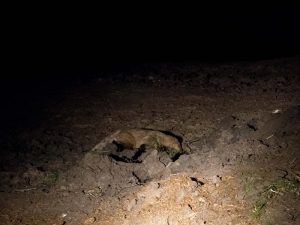 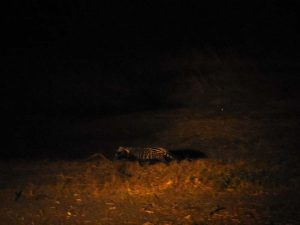 a beautiful African civet hunting along the river

Of course we were excited when we spotted a leopard, or the lioness eating a hippo with several enormous crocodiles laying right next to her, doggedly holding on to their part of the feast. But we were most interested in the civets, genets and other smaller creatures of the night. We spotted our first ever marsh mongoose, and then several more. Plenty of genets, and even a few African civets. This was our idea of heaven. 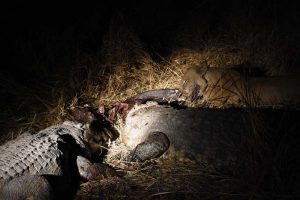 this lioness is enjoying the scraps of a hippo kill, the crocs however are not letting go of their bit and hold a firm grip of the hippo too 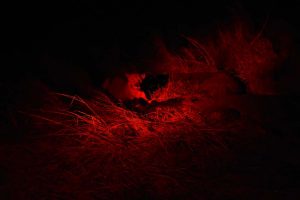 using red light to not disturb them, you can clearly see the enormous croc holding on to his bit 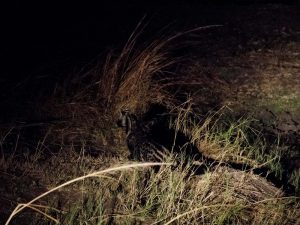 One night we left our tent in camp empty and spent it outside at the edge of the open plains. It was great to sleep outside under the stars again. We had our own bathroom, complete with toilet, washbasin and even a hot shower. Dinner was a romantic one by candlelight, just for us, and afterwards there were some more gin & tonics by the campfire. Magic. It was slightly unfortunate that crews had been working on the roads that day and most of the animals had disappeared into the distance, but the scenery alone made it worth camping under the stars. 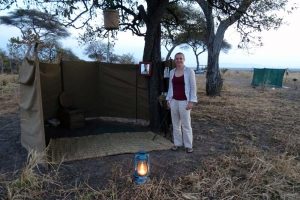 our bush bathroom complete with shower, toilet and wash basin 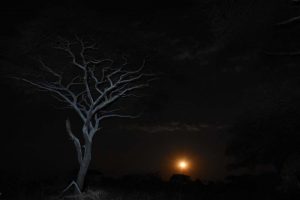 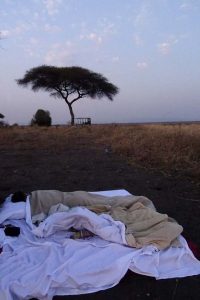 waking up in Katavi NP, why can’t every night be like this? 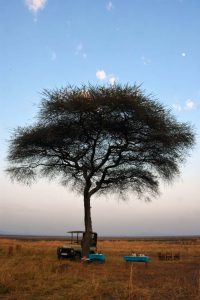 posh breakfast out in the bush

We stayed at the Nomad camp called Chada. It is a luxury camp, with only six tents, but not over the top. A huge disappointment was the knowledge of our guide. We had specifically asked for a bird guide, but he knew nothing about birds. The manager ended up being our guide, as he was the only one in camp who had some knowledge about birds. It was great to work out what birds we saw with him, but when you pay this much for a camp, all guides should have an excellent knowledge of every animal, including birds.

Chada offers night drives, as well as walking safaris and even fly-camping. The night drives alone are worth the trip to Katavi NP. 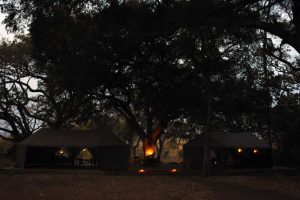 our tent in Katavi NP 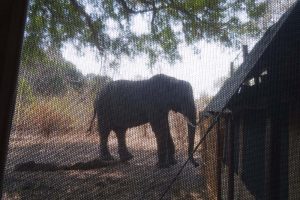 we have a visitor to our tent, he is hoping to find some water here 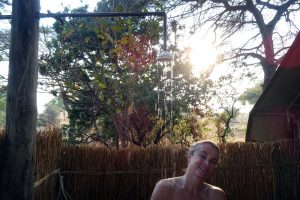 the shower at our tent, this is where the elephants know they can find water