The Pamir Highway covers 750 km from Osh (in Kyrgyzstan) to Khorog in Tajikistan. This was another part of the trip we were both very much looking forward to. The plan was to partly drive the Pamir Highway, as we were keen to drive through the Wakhan Valley which borders Afghanistan along the Pamir and Gunt Rivers, and for that we had to detour south from the Pamir Highway at some point.

The Pamir Highway was built by the Russian military in the 1930’s to facilitate troop movements in the furthest reaches of their empire. We were surprised it was pretty much all tarmac (asfalt) in good condition, but didn’t mind when driving over the highest pass on our trip at 4655m. A test Lara passed easily, we were struggling a bit due to the rapid altitude gain in the last few hours. 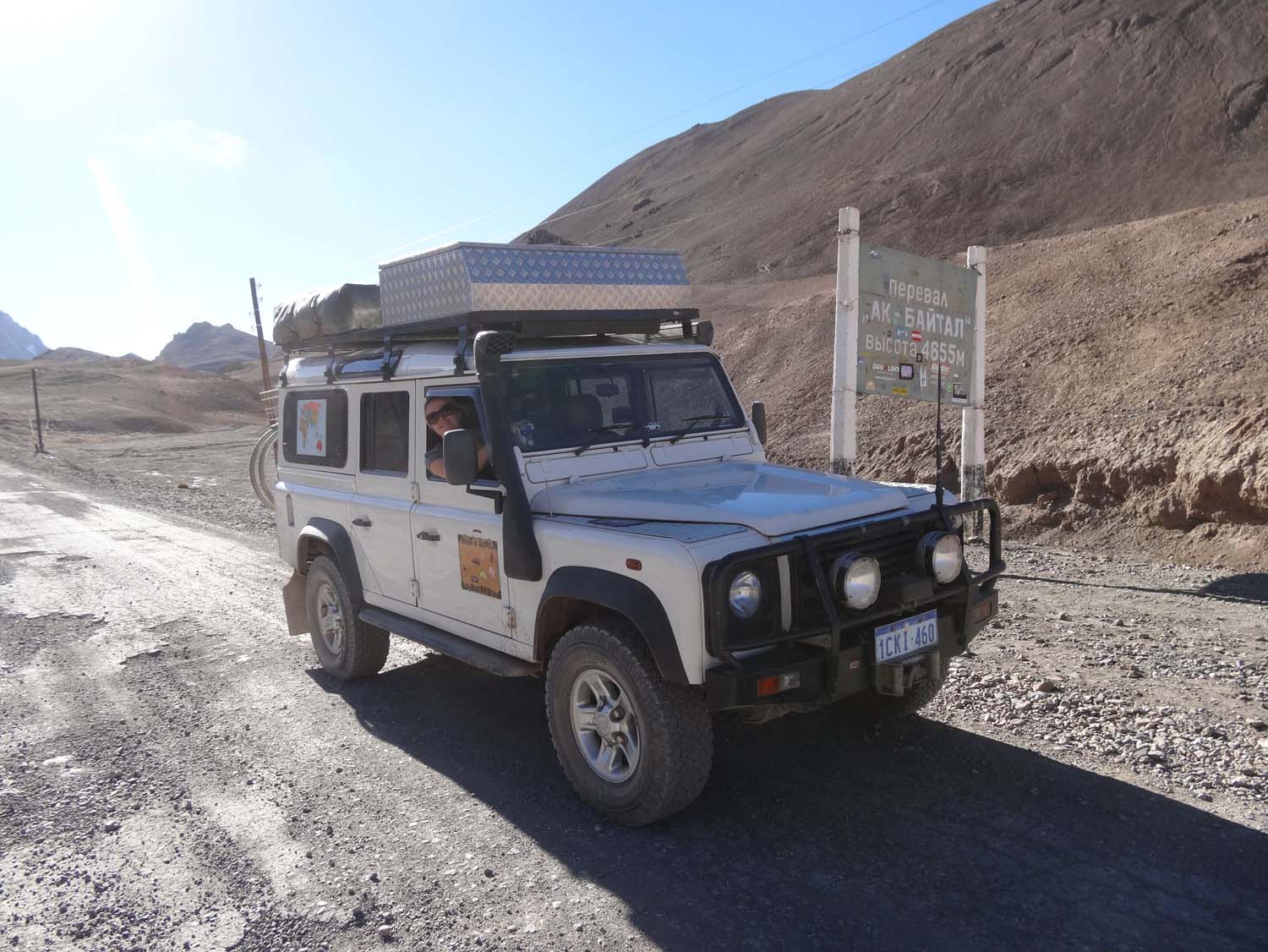 This road has only recently been opened up to foreigners and last year it was even closed due to some unrest in Khorog. We were very lucky to be able to drive it.

Driving down from Osh we bumped into Christine and Guillaume in their Land Cruiser. We had met them in Mongolia and spent an hour or so catching up on news alongside the road to the border with magnificent views of the Tajik Mountains in the background. Given they were heading in the opposite direction we exchanged notes and currencies. 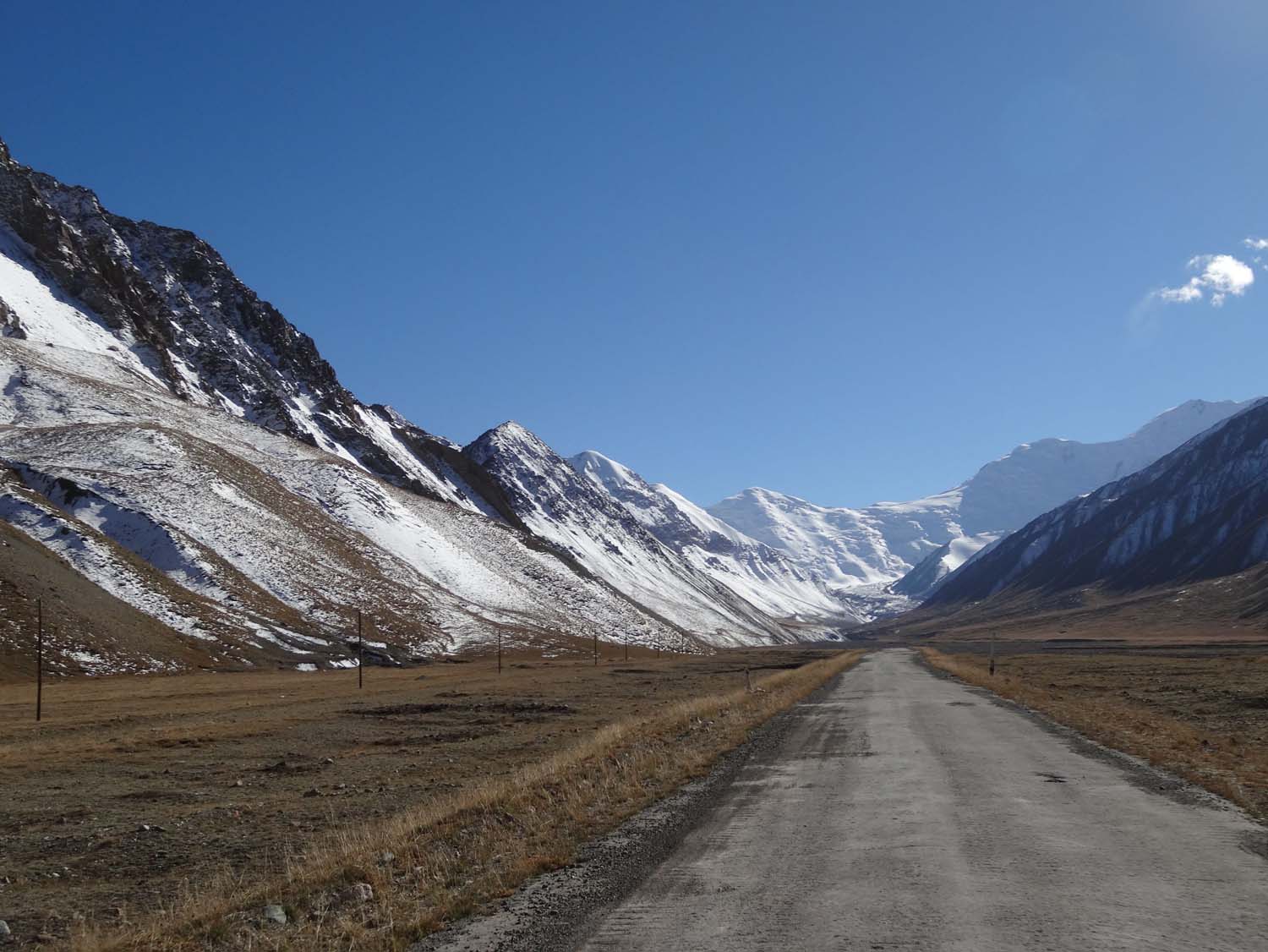 driving towards Tajikistan, already on the Pamir Highway!

A little later we left the plains of Kyrgyzstan and entered the Pamir Mountains with our climb towards the border (you can read about the Kyrgyzstan – Tajikistan border on the Tajikistan page), followed by more climbing until we finally reached Lake Karakol at 4000m altitude. It was late and we decided to camp there, admiring the sunset over the lake as we set up the tent. We had to quickly add layers of clothing, as the temperature plummeted as soon as the sun dropped behind the horizon. Beanies, gloves, thermals and even the sleeping bags all got a good workout that night. Perhaps a taste of what awaits us in Europe in a few months? 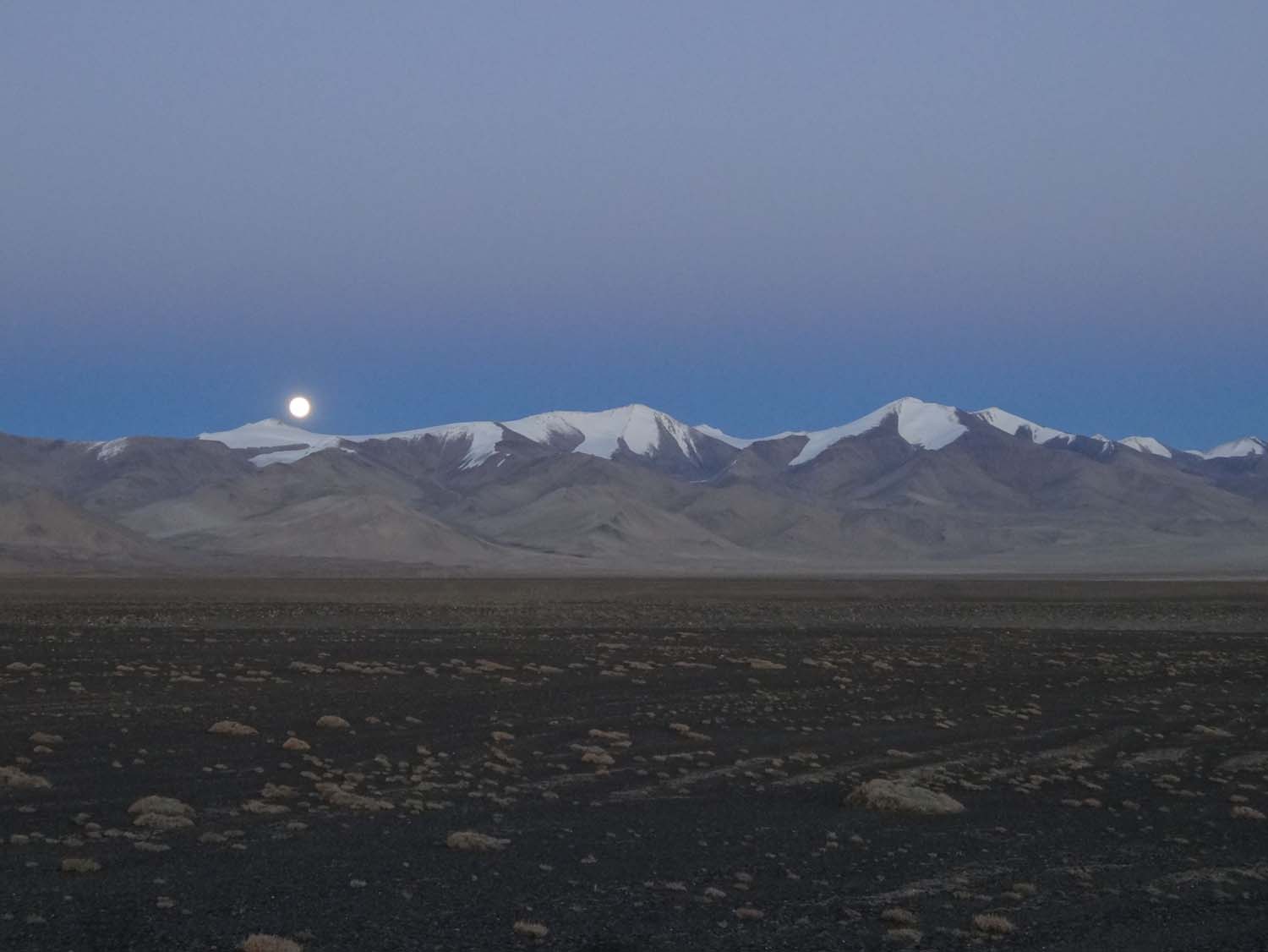 full moon at our campsite next to Lake Karakol at 3938m 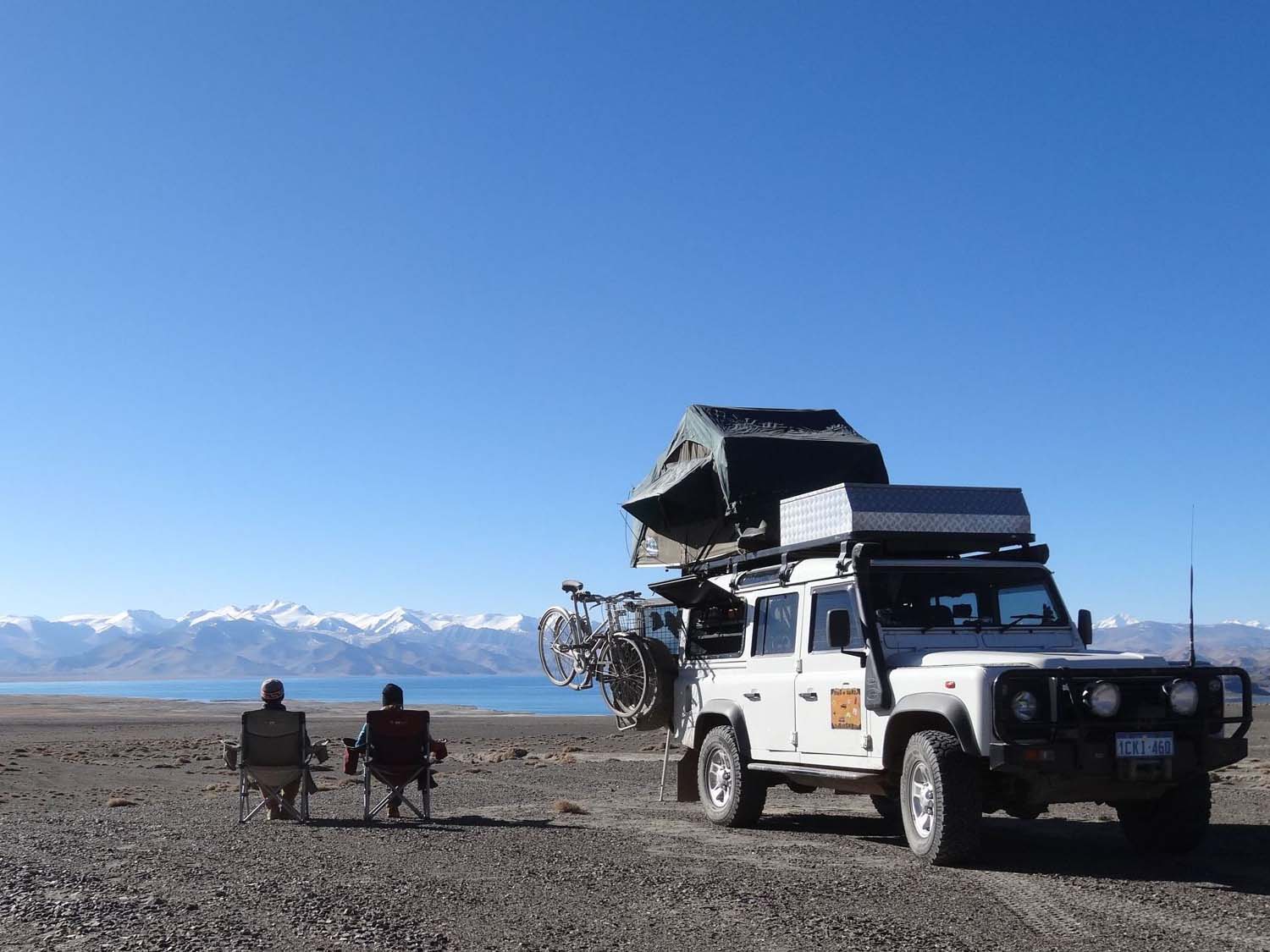 The next morning Lara refused to start at the first attempt for the first time on the trip, today she took 2 or 3 goes before she started purring. Her temperature gauge read ‘less than zero’ and gave an error message before she slowly warmed up. Our water pump and water bottle up in the tent had also frozen solid during the night. Luckily we had some bottles of water in the fridge we could use for our cuppa! (kopje thee) 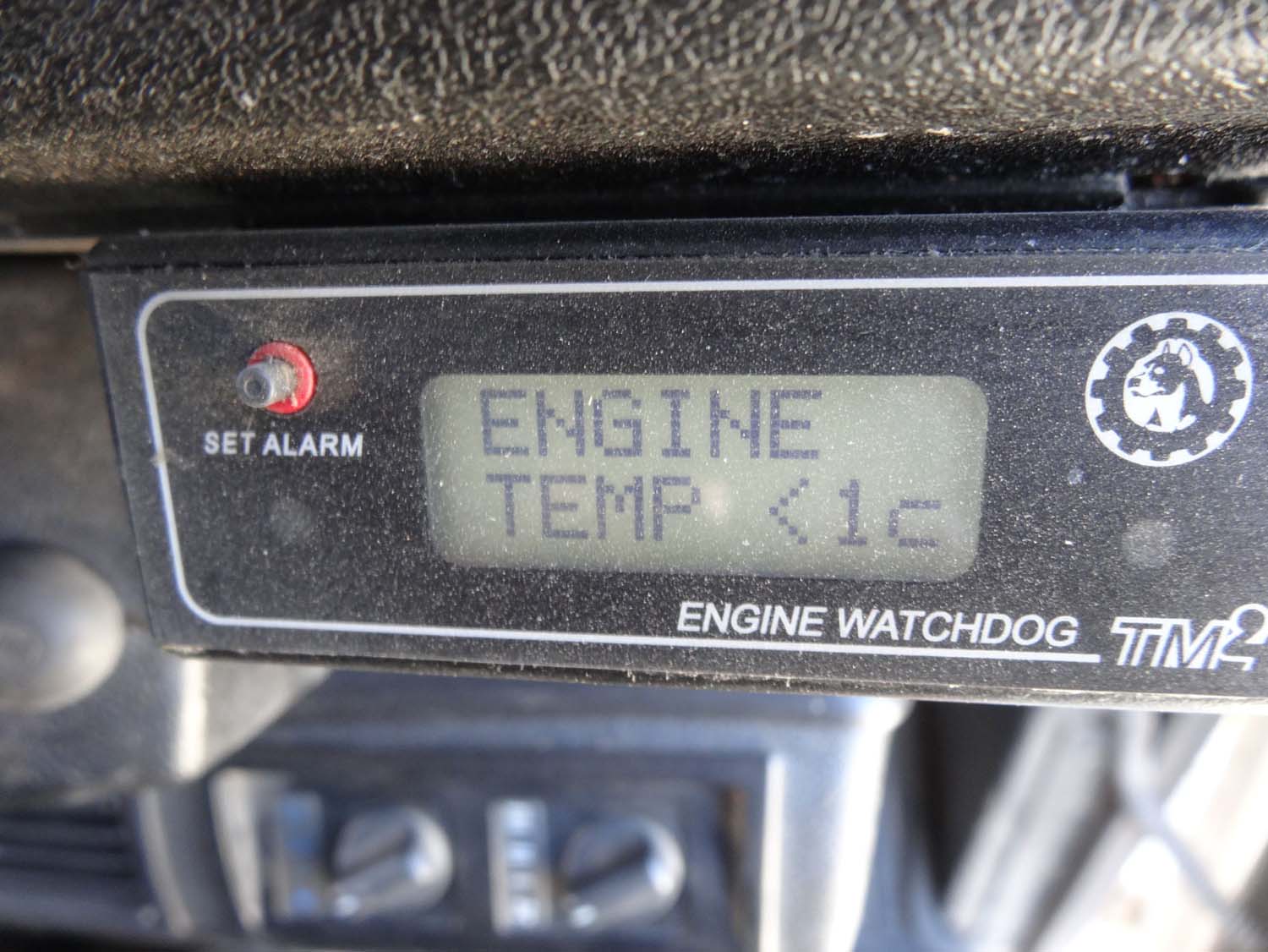 poor Lara was struggling with the temperatures (and so were we)

As soon as the sun reached us from behind the mountains it warmed up quickly, and we couldn’t resist getting our kayak out for a paddle on the lake. It’s not often you can paddle on a crystal-clear high-altitude lake, surrounded by snow-capped mountains. The water along the edge was still frozen when we launched, but on the water it was gorgeous. 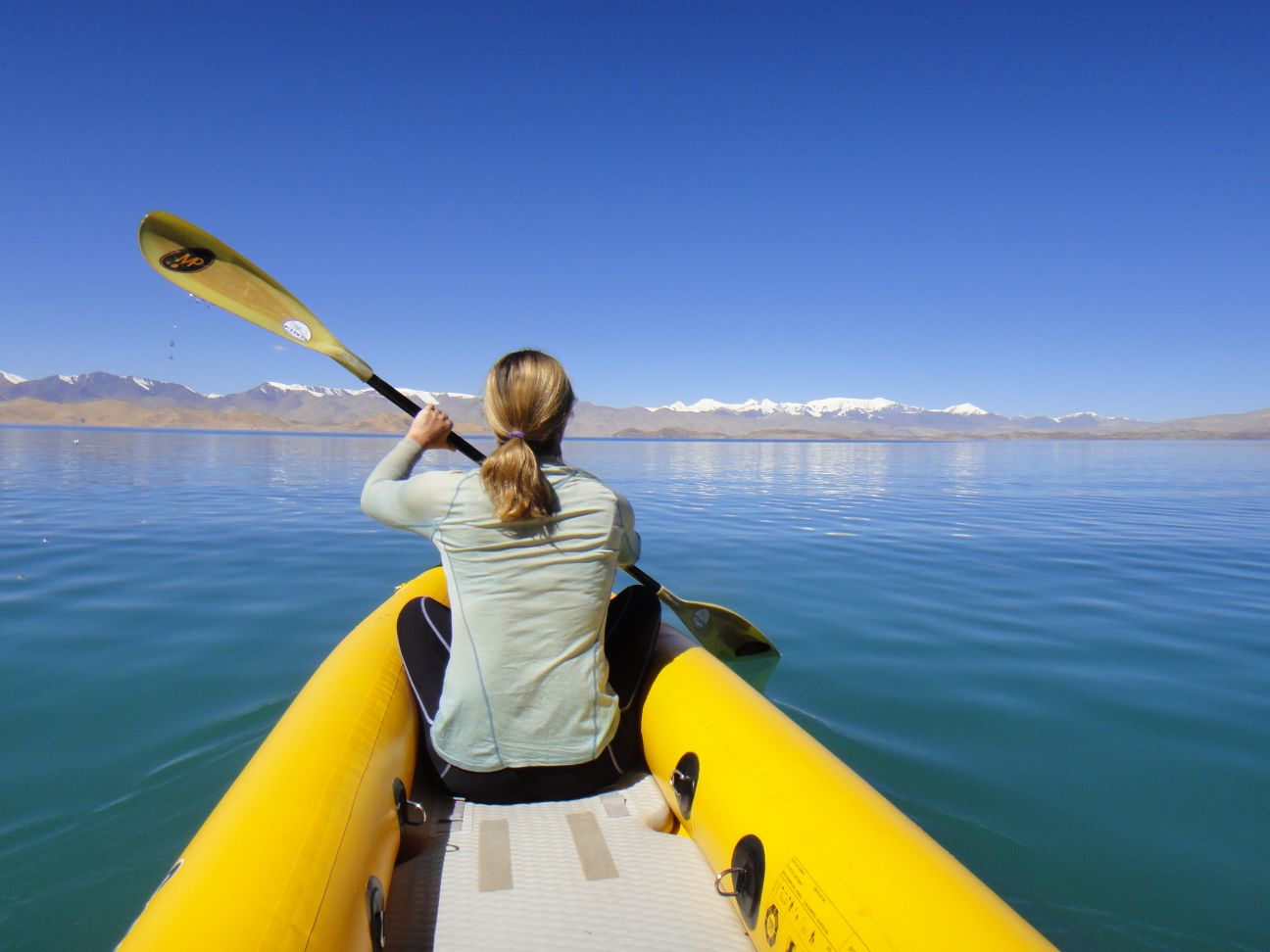 As you drive through the Pamirs, surrounded by towering peaks, you soon forget you are driving at over 3,500m altitude. Instead, you notice how dry and desolate this place is, essentially a high-altitude desert. Nothing grows here, and the locals appear to eek out a living with goat herding. 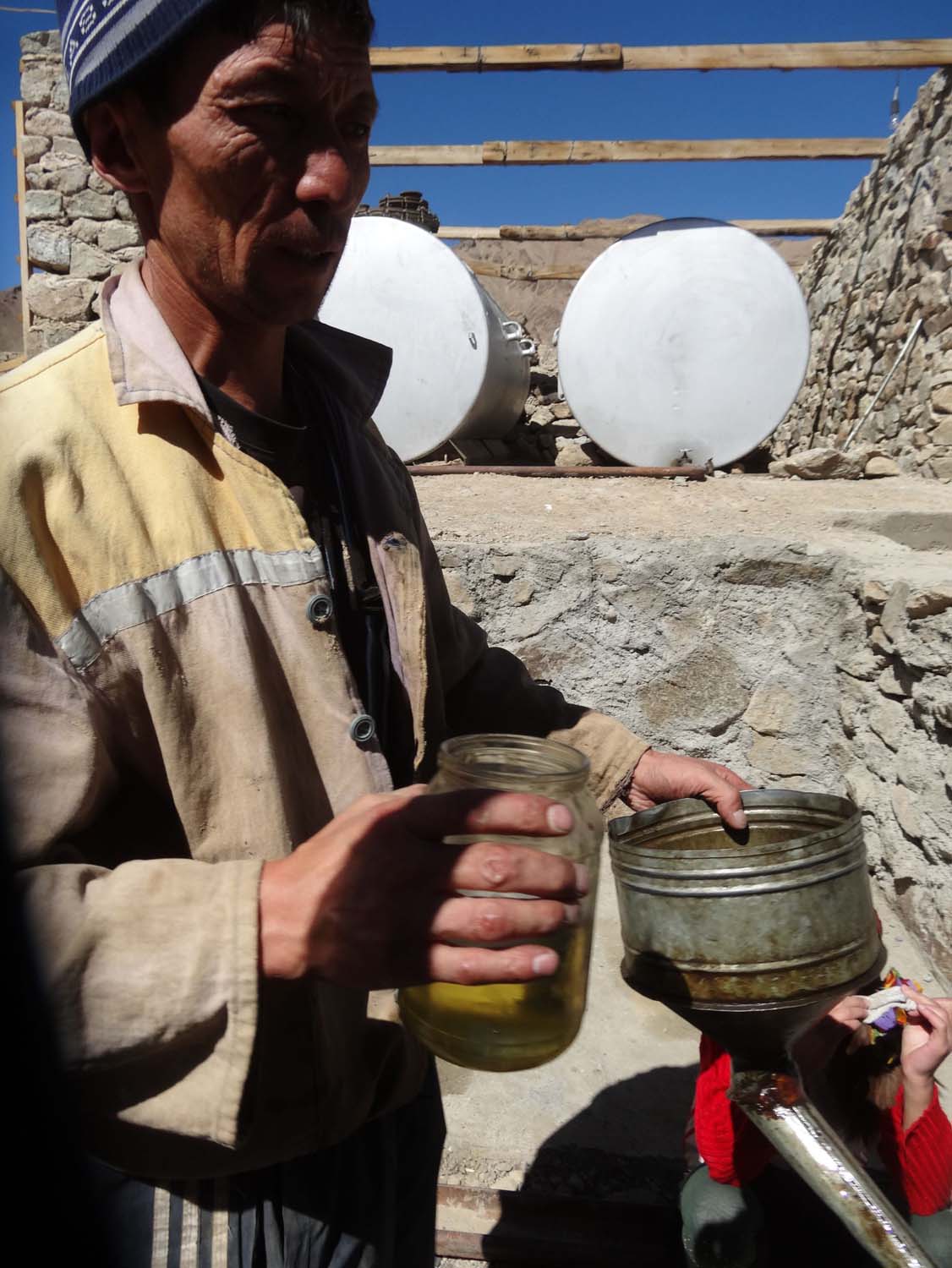 filling up with diesel on the Pamir Highway, this was our change… 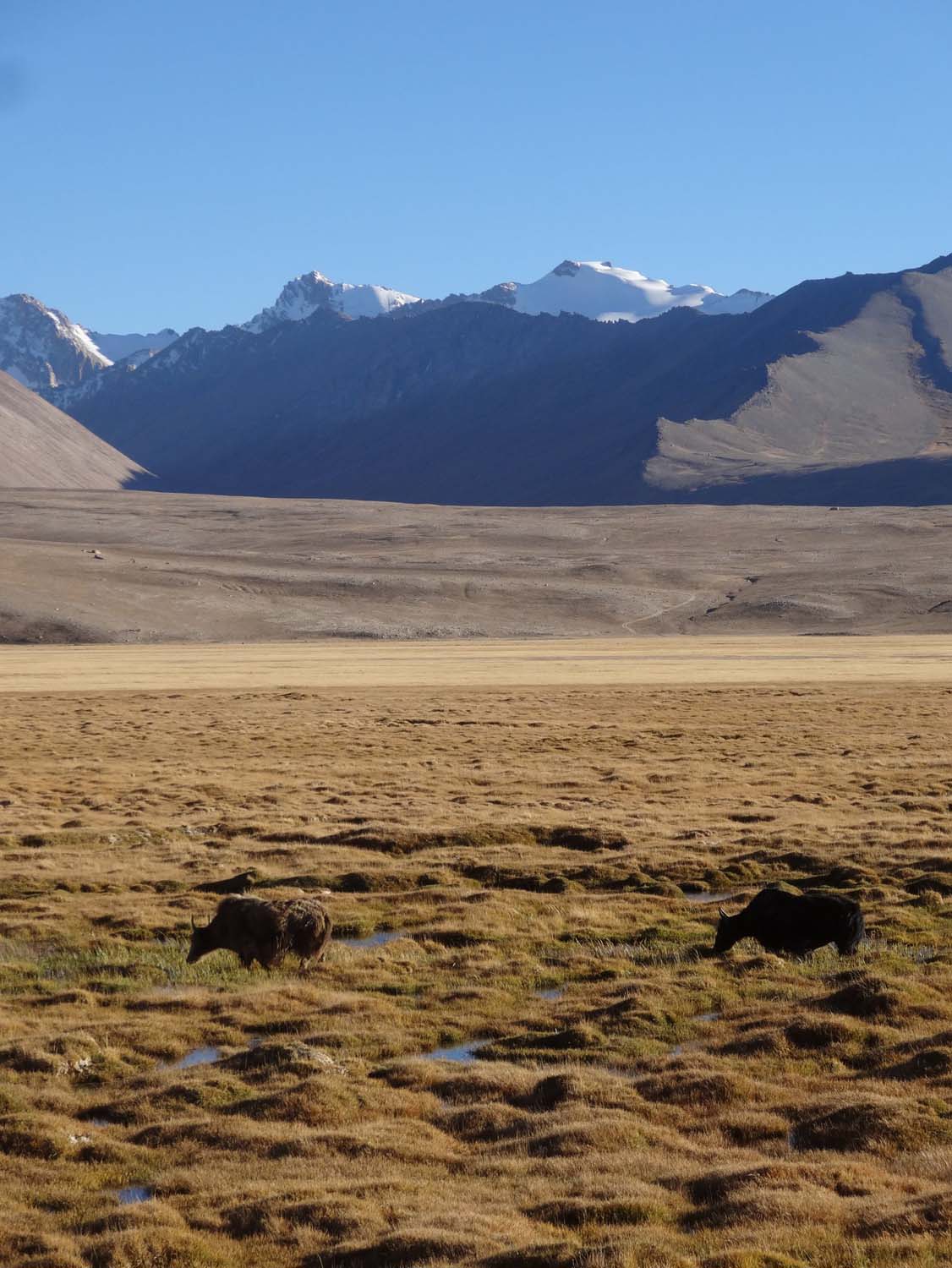 yaks on the plains of the Pamir Highway 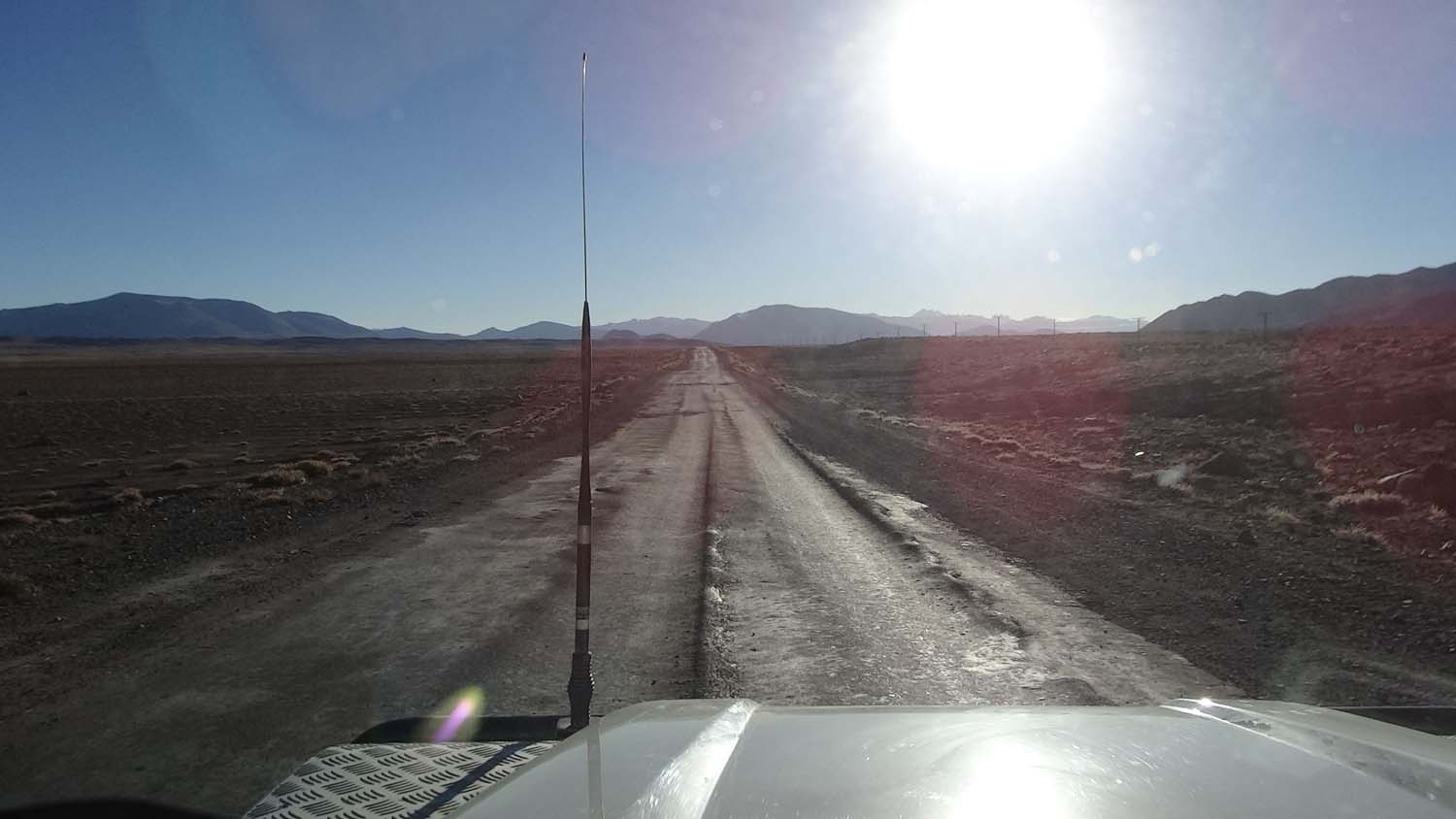 the Pamir Highway, tarmac almost everywhere but not always in good condition 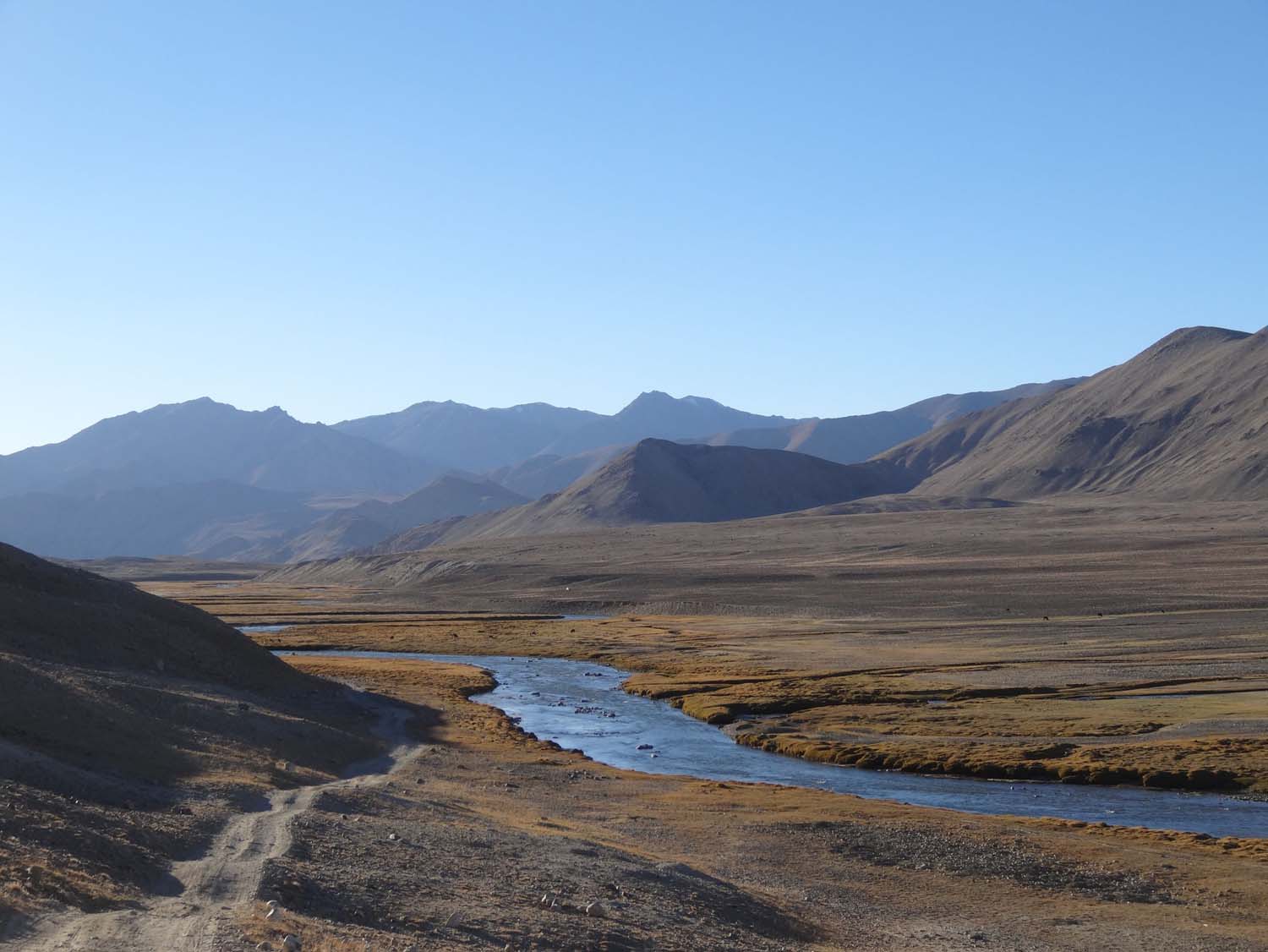 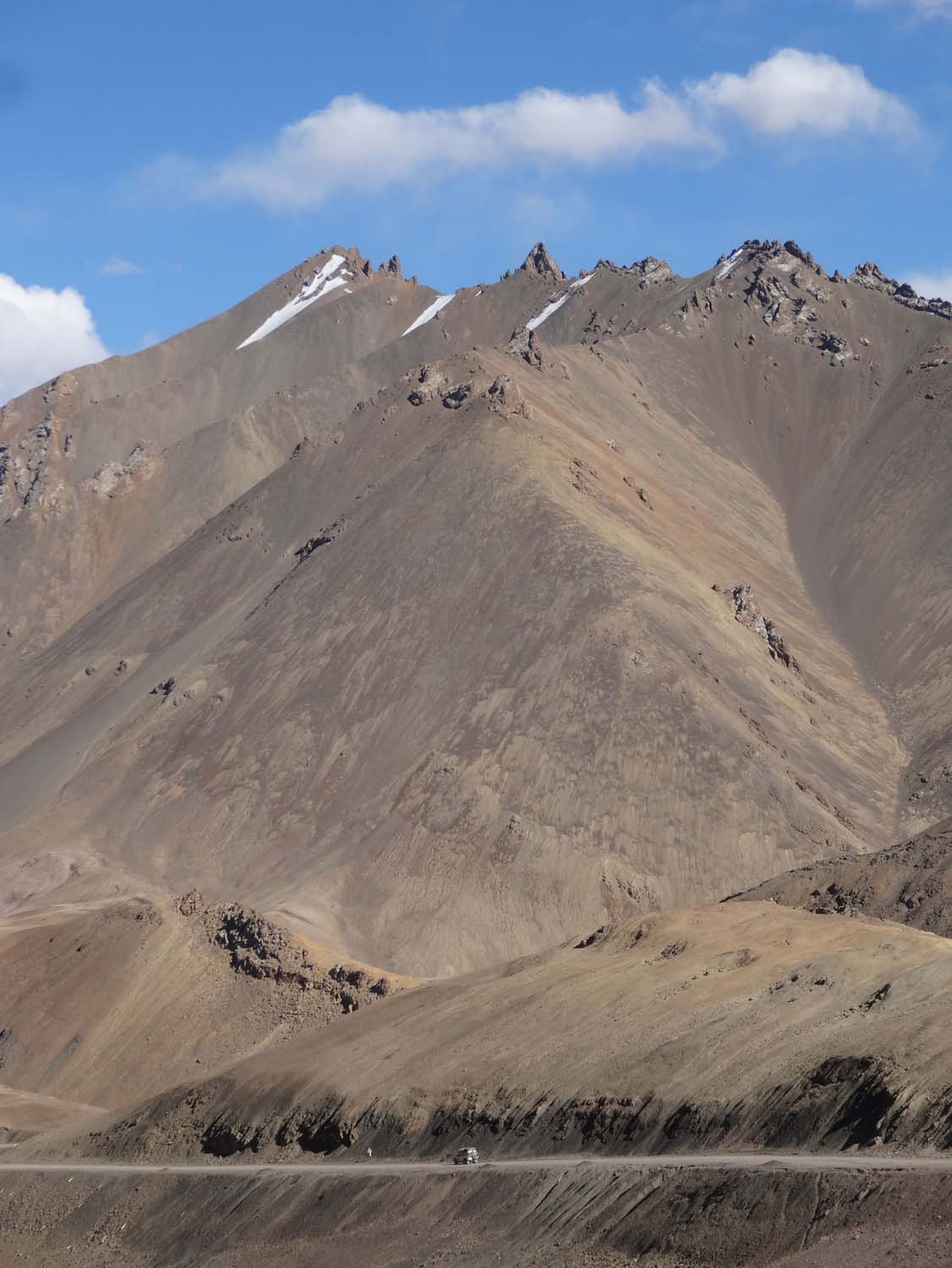 Lara cruisin’ on the Pamir Highway 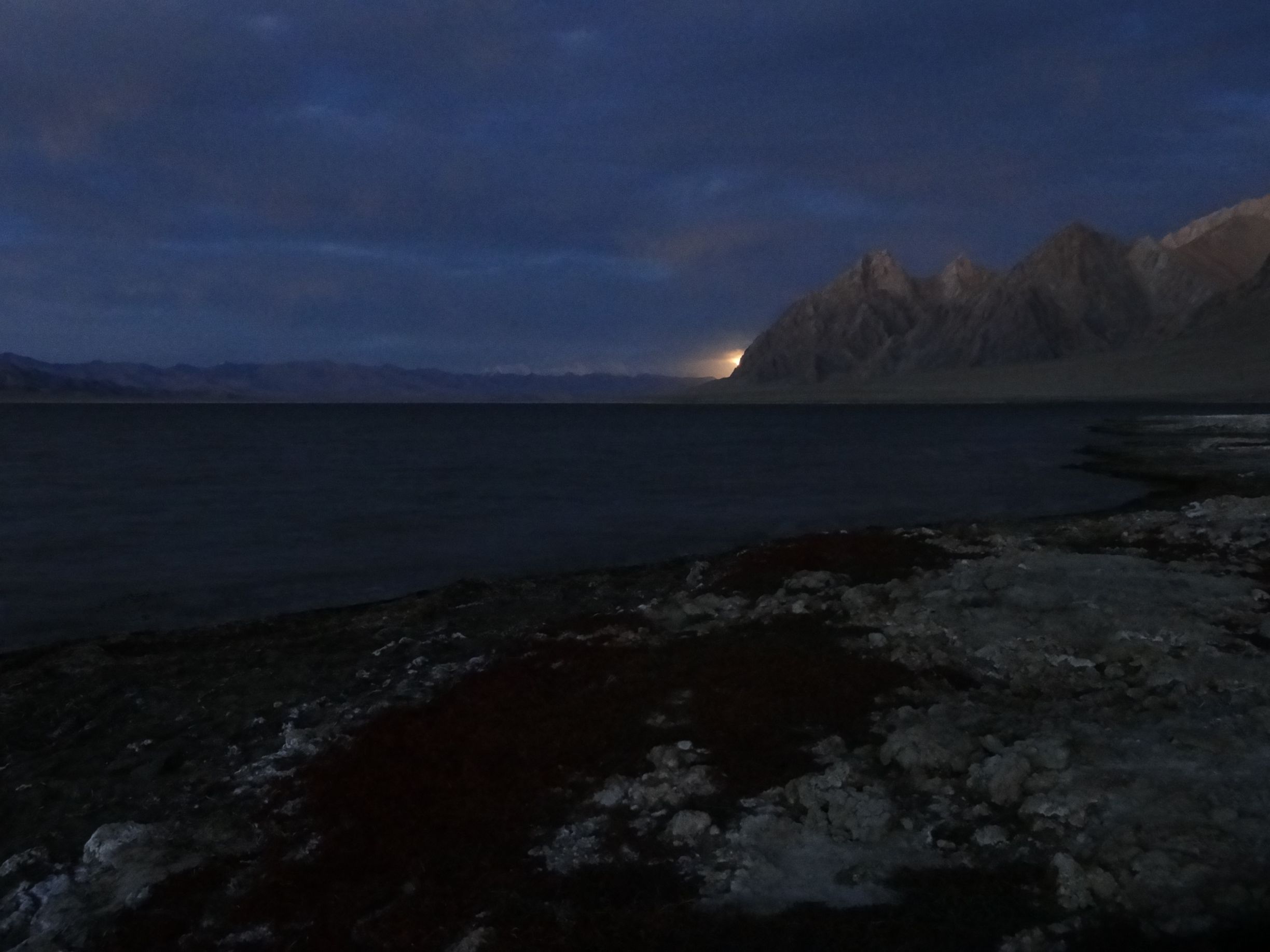 The next day, after camping at another pretty lake overnight, we arrived in Murghab, the main town in the eastern Pamirs. The Tajik border guards had run-out of vehicle import forms, so had scribbled our details on a blank piece of paper, and added their stamp at the bottom for a bit of official-ness. This meant we needed to have this transcribed onto an official form, and also apply to extend our car import papers (we were given 30 days at the border, but for some unknown reason cars only get 15 days). No such luck in Murghab. The customs official did scribble a new exit date on our blank bit of paper, but we think he said he was also out of original forms and didn’t have a stamp. We’ll have to try again in Khorog…

Our confidence in people and our security received a bit of a dent when we returned to our car from the customs office: they had stolen our ‘blind spot’ mirrors and 3 of the 4 valve caps off the car (had we interrupted them or is 4 an unlucky number for thieves?) in the 20 minutes or so we had left her alone, in front of the information office in the middle of town.

It wasn’t so much the value of the things they had taken, it was the loss of our feeling of security that hit hardest. Leaving Lara anywhere had turned from a routine matter (which we never even thought about) to a worry. What if they break in and take more valuable things? It was a thought that crept into our heads, but luckily we were in the Pamirs now. The people in this region are incredibly open and welcoming to strangers. And soon we were confident to leave Lara again wherever we wanted and started to enjoy the hospitality of this amazing region again.

It wasn’t far from Murghab (which we had left in a bit of an angry hurry) to our turn-off point and soon we were driving towards Yashil-Kul lake. It was already getting late, but as it was Jude’s birthday the next day we wanted to push on to the lake before dark. We failed miserably as track after track turned out to be dead-ends and we were getting pretty frustrated. Soon we were driving in the dark, wondering if we were ever going to find this lake, when we bumped into a tiny little sign for a geyser (the nearest village is probably more than hundred kilometers away, so this sign was quite remarkable). That would do for the night. We parked up and quickly prepared dinner in the dark. 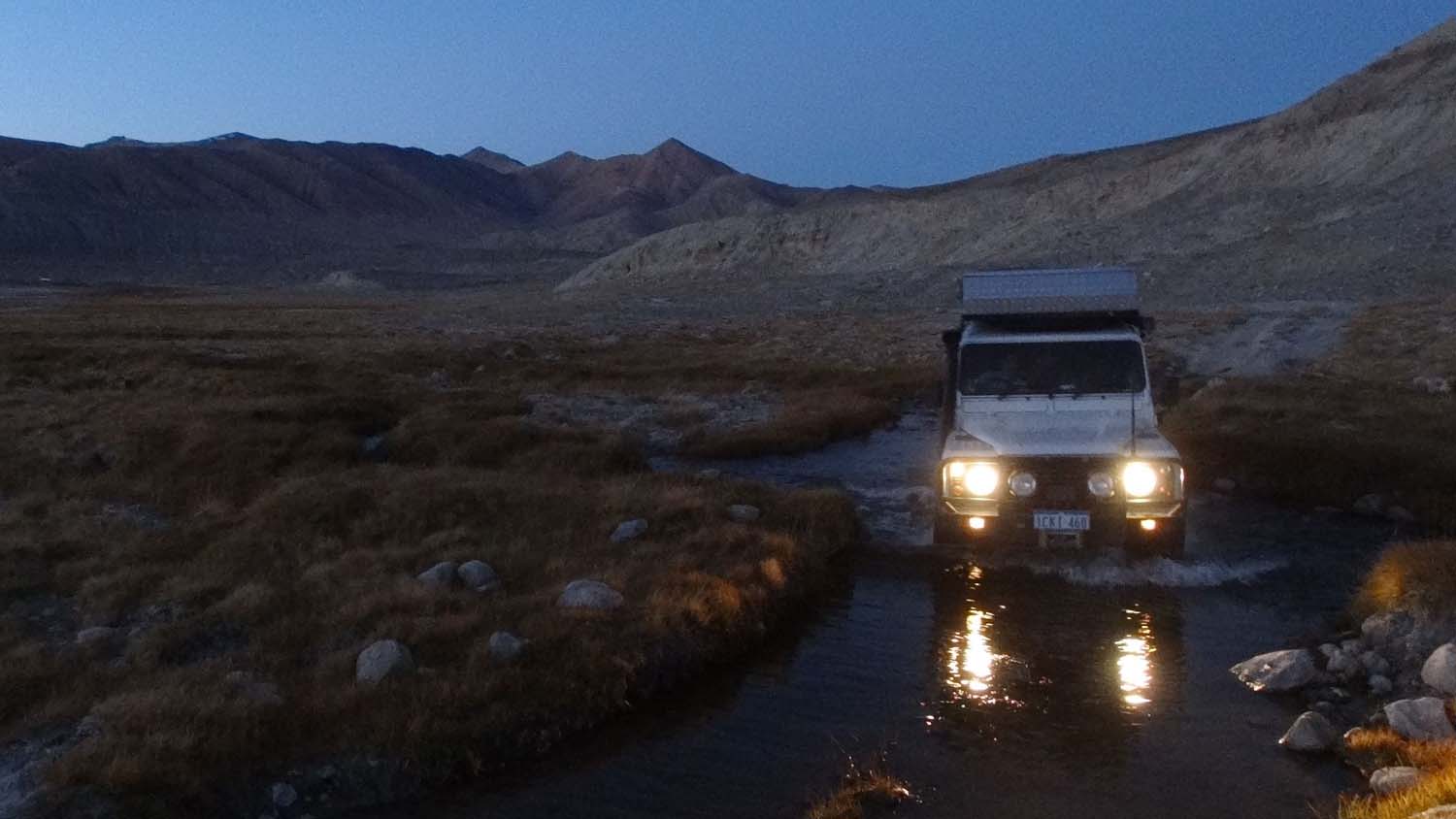 The next day we quickly covered the remaining kilometers to the lake and headed for the ancient stone circles on the north shore. Archeologists have not yet discovered what they are for and why they are there, but some think it is a sort of primitive Stonehenge. For us it was a fantastic birthday morning tea stop, and a great 4WD track to get there too.

After morning tea we drove back towards the Pamir Highway, to spend a few last kilometers on this amazing road as we were taking the alternate route to Khorog from here through the Wakhan Valley. 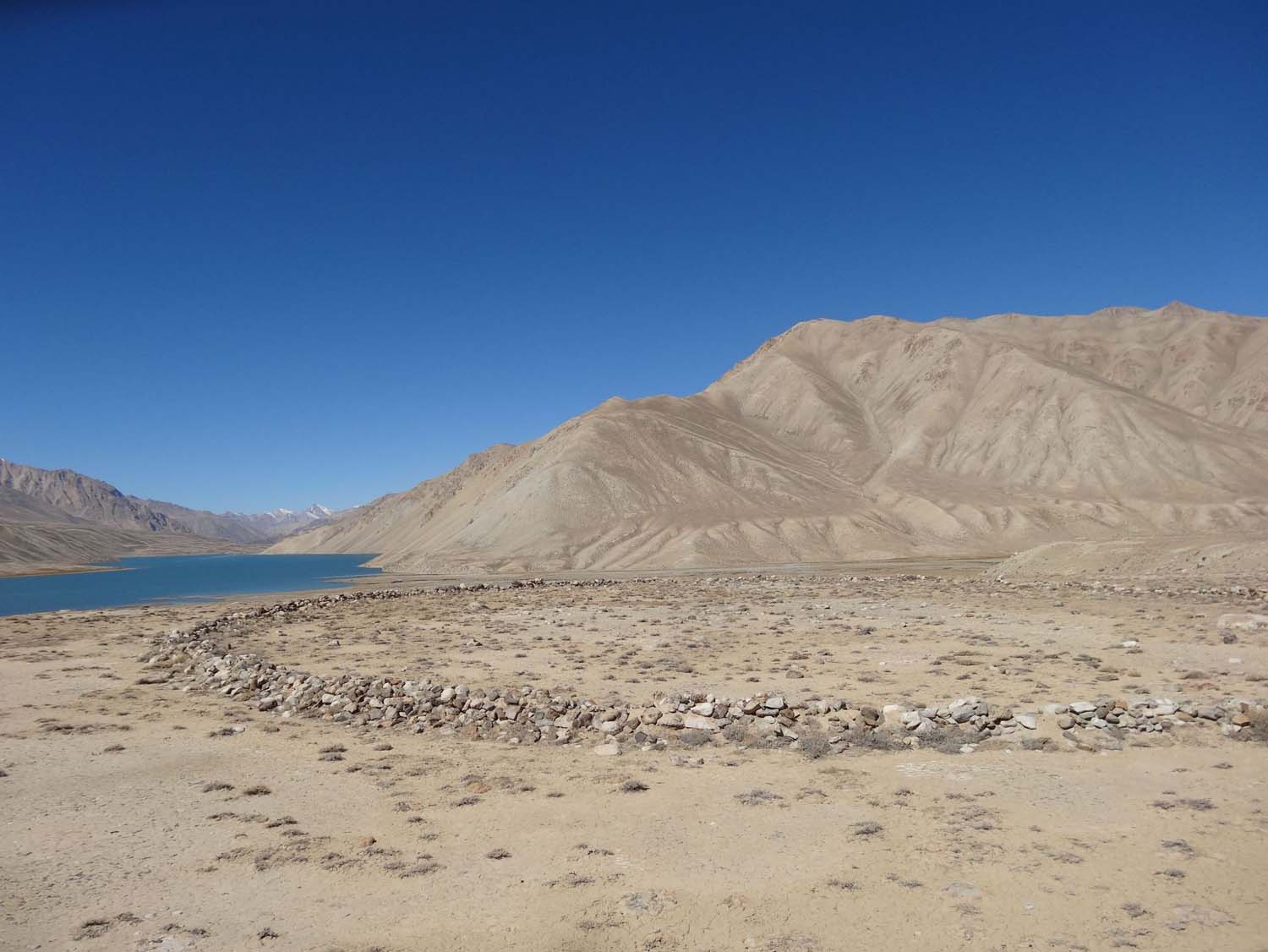