The handcuffs are on 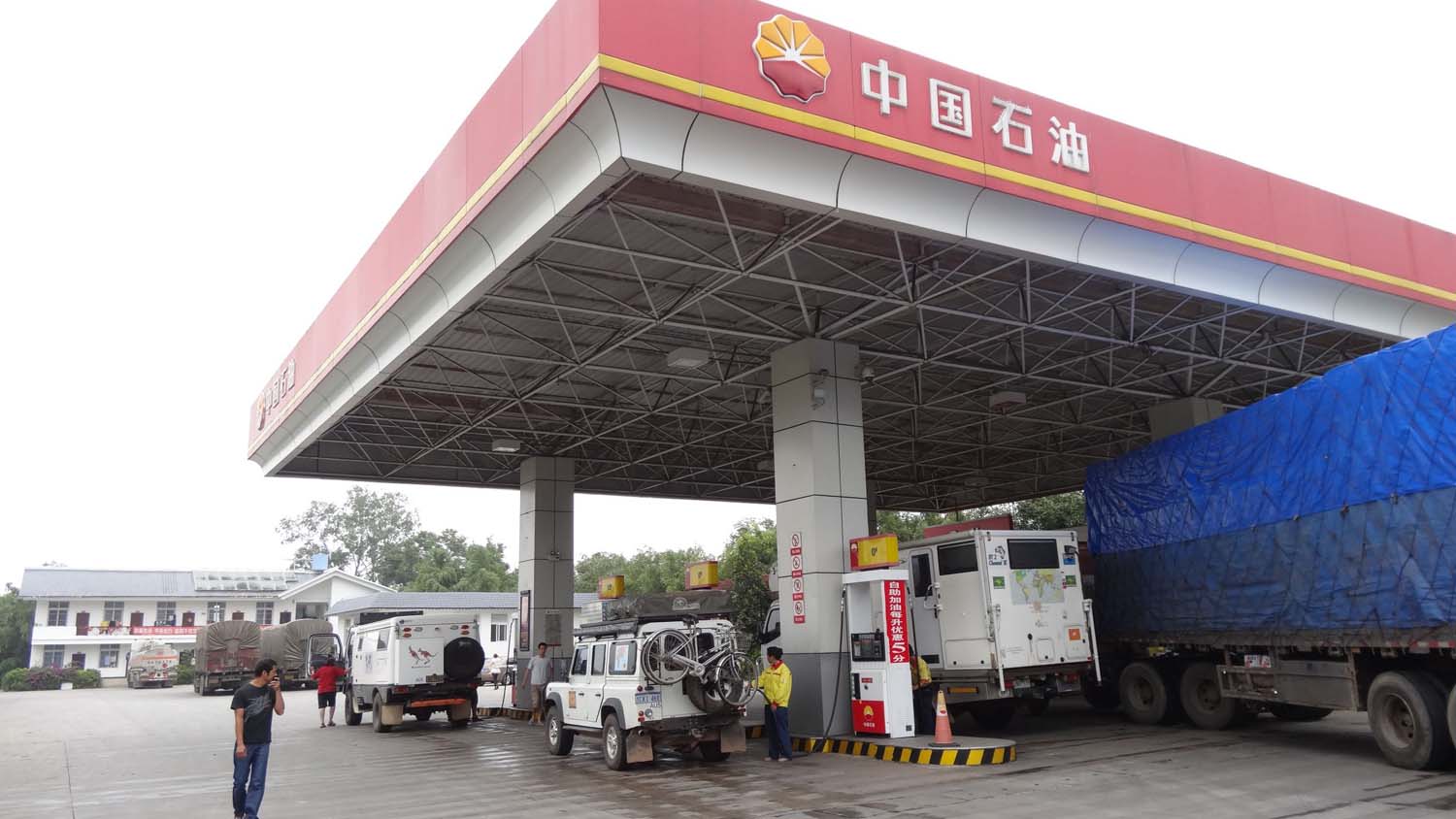 even filling up requires organising now 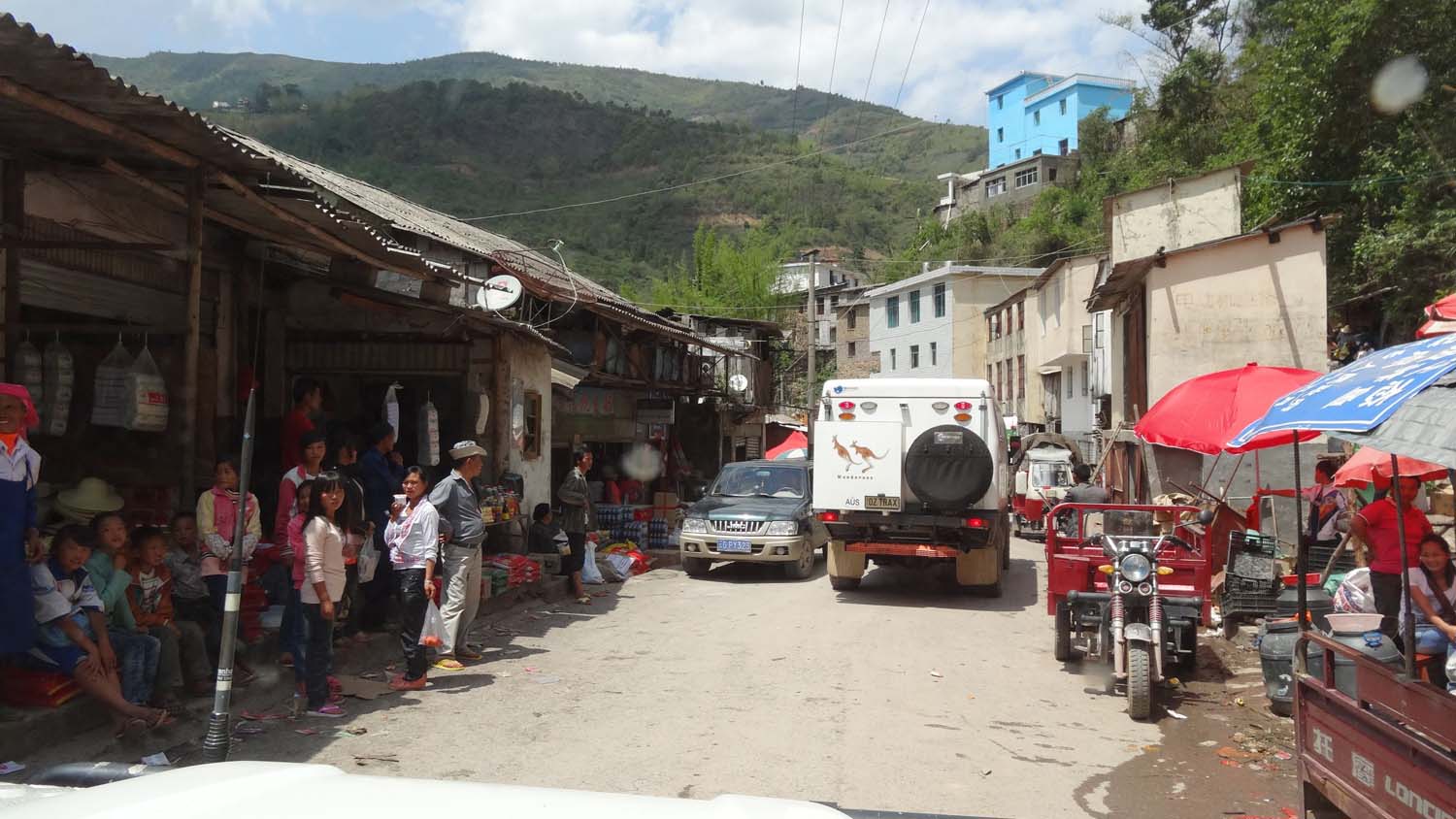 We’re very lucky to be traveling with people we know, but now have to deal with a guide as well. Unfortunately our guide is not very much a guide. We were hoping he would be quite knowledgeable as he has been doing this job for 4 years or so, but he is just a minder 🙁 No knowledge about any of the sites we want to go to and his gps proves old and useless as well. 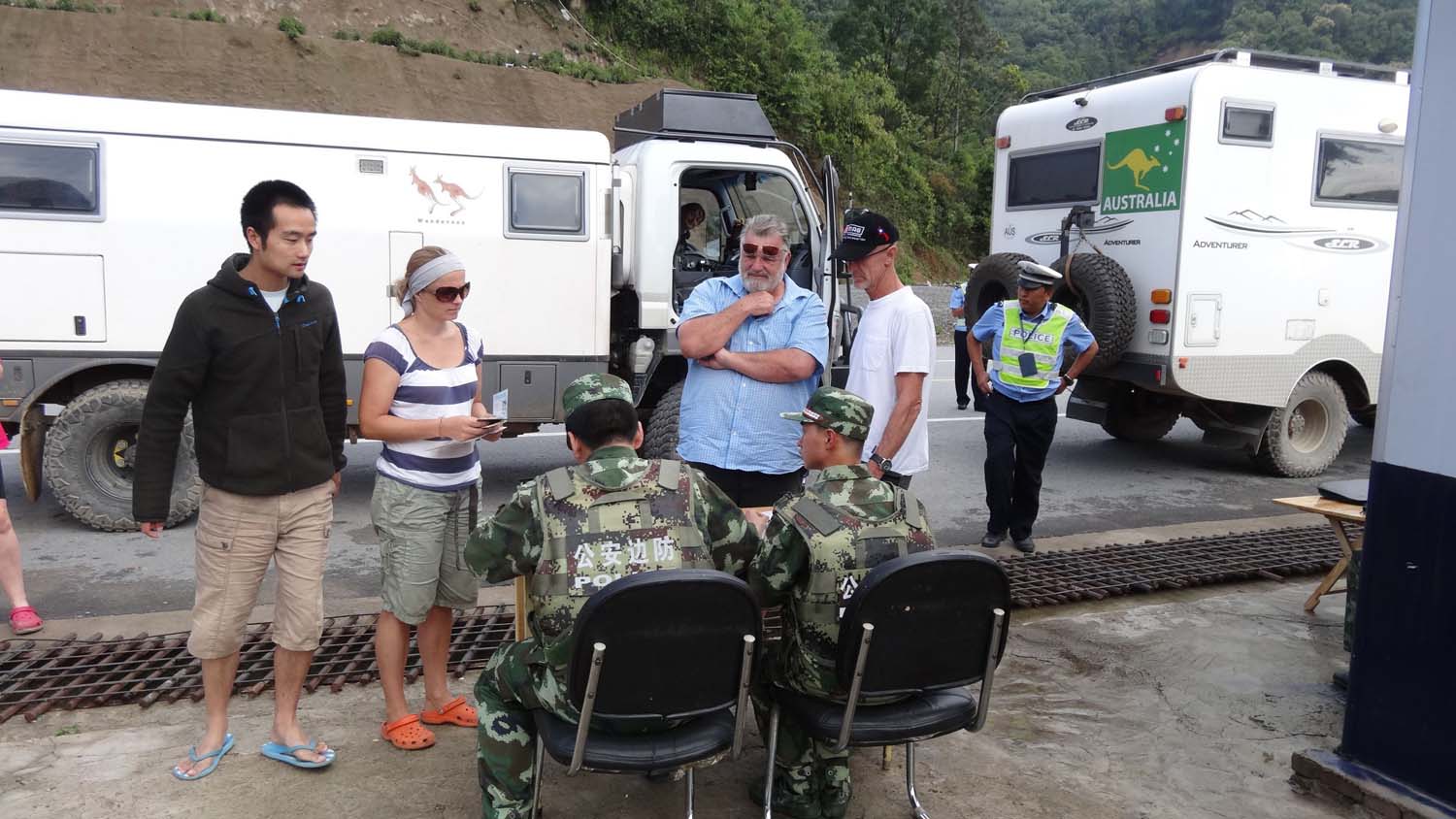 Another police check, our guide just added more confusion. He seems to get very nervous when any official is around.

Our first week in China is spent trying to get to grips with convoy driving and making Andy understand what we want. He just wants to stay in hotels in cities and the second night he has planned for us to stay in a car park in the middle of a big city. No public toilet, just a few trees. His description was: it’s a nice carpark next to a little park with some green. In the evening you can walk up and down the river (Mekong). Totally not acceptable. 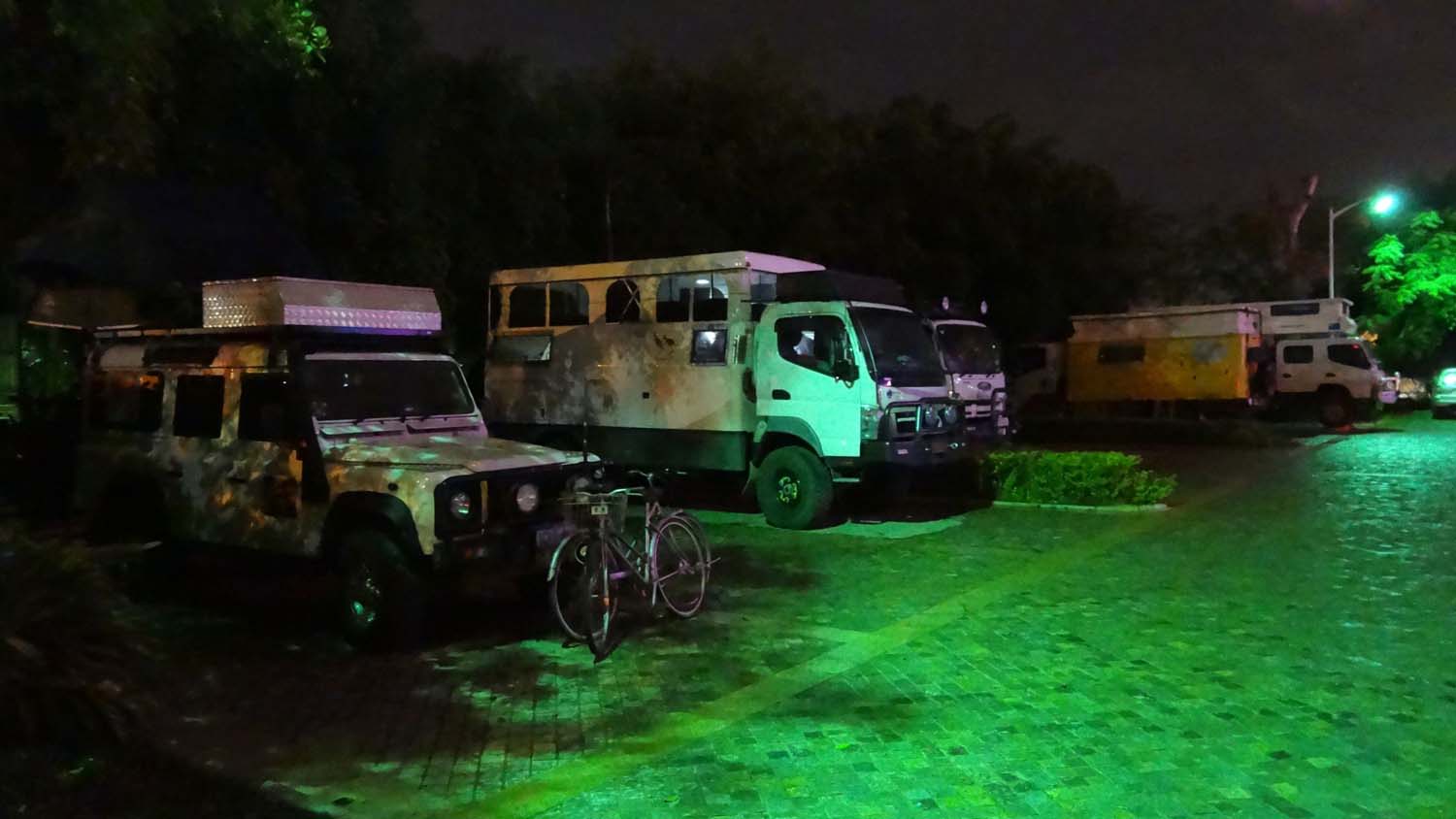 living the dream in a carpark in China town…

We’re very happy that our fellow travelers also want to camp away from towns and the next few nights are better. There is also a big hooha about Andy’s accommodation and Jon as the spokesman of the group has some interesting conversations with him. In the end we all decided it is easiest to give him a lump sum per week for food and accommodation, it is now up to him to decide how often he wants to stay in a hotel and eat out (he can camp with us and then we also provide him his food). So far he seems happy to put the money in his pocket and not stay in a hotel.

We feel it’s pretty sad that we pay the Chinese organization so much money and then still have to pay for his accommodation and food, but that’s the way it is. An expensive exercise this China section. On top of that Chinese attractions are expensive too (think $35 to enter a national park, yep, that is per person).

Our phonecard wasn’t expensive, but to our surprise only 2G. We were expecting 3G around the country, but apparently you can only get 3G in very limited areas and you pay a lot more for a sim card that allows 3G. Being in China also means no facebook (blocked) and we won’t be able to update the blog until we get to Mongolia (our blog is also blocked). Wifi is not very widespread here either, we haven’t seen in the week we have been here… 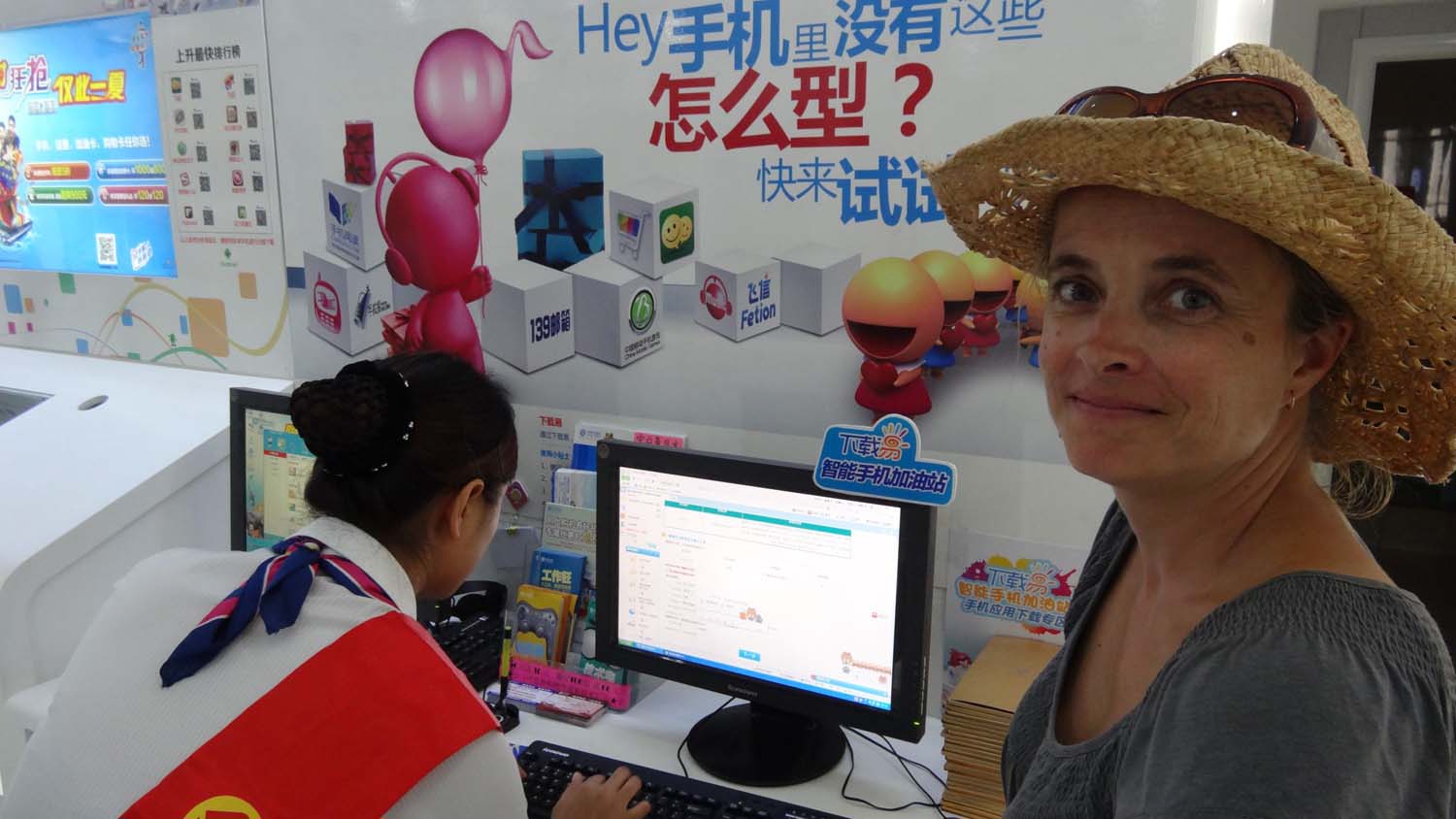 nothing written in English, nobody speaks any English… fun! (getting our sim card)

It’s not all bad down here in China though. We’ve started our first audio book, have started running whilst driving sections, had our first quiz night and have caught up doing a lot of chores in all the extra down time we are getting. 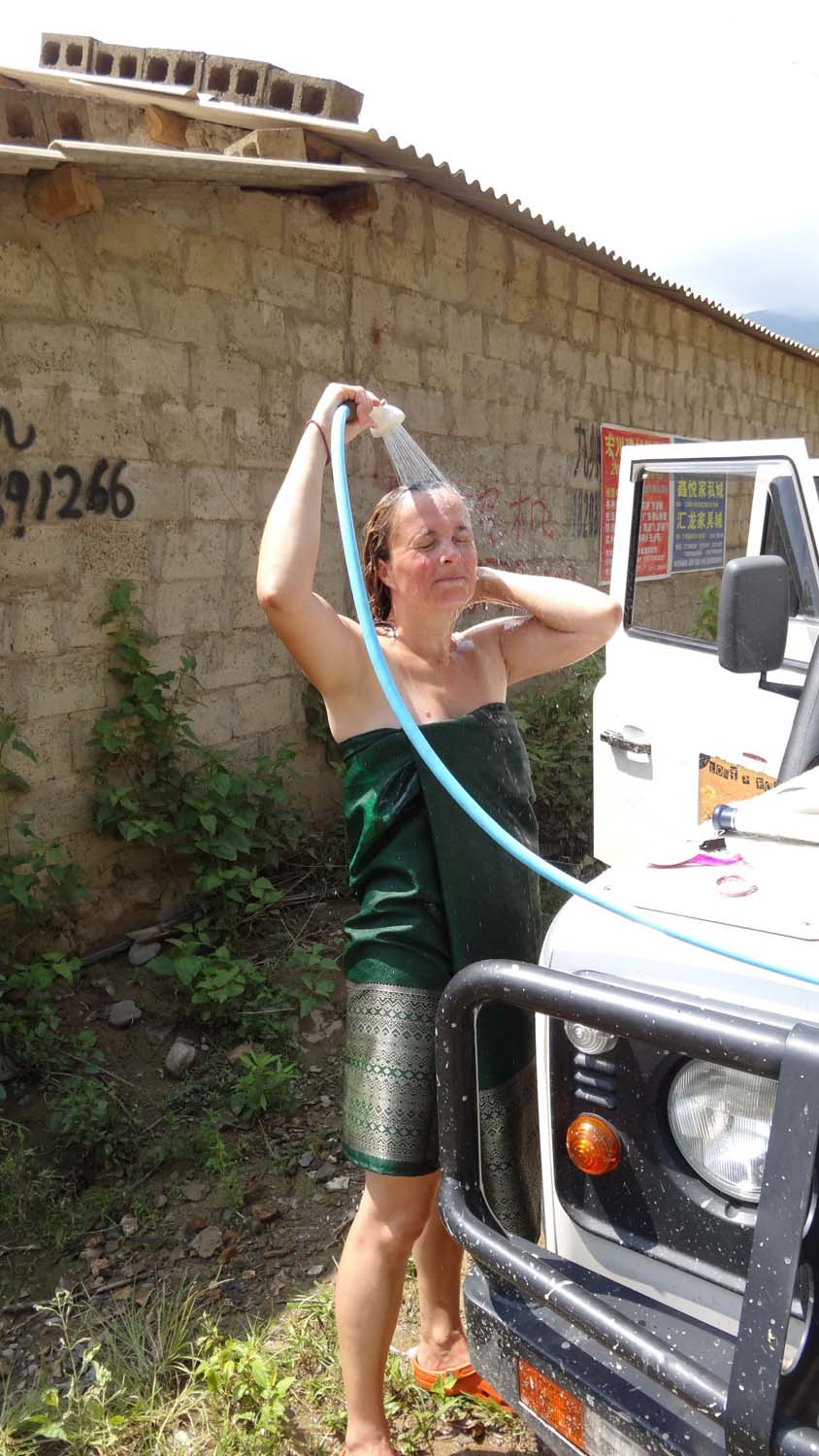 roadside shower after our run 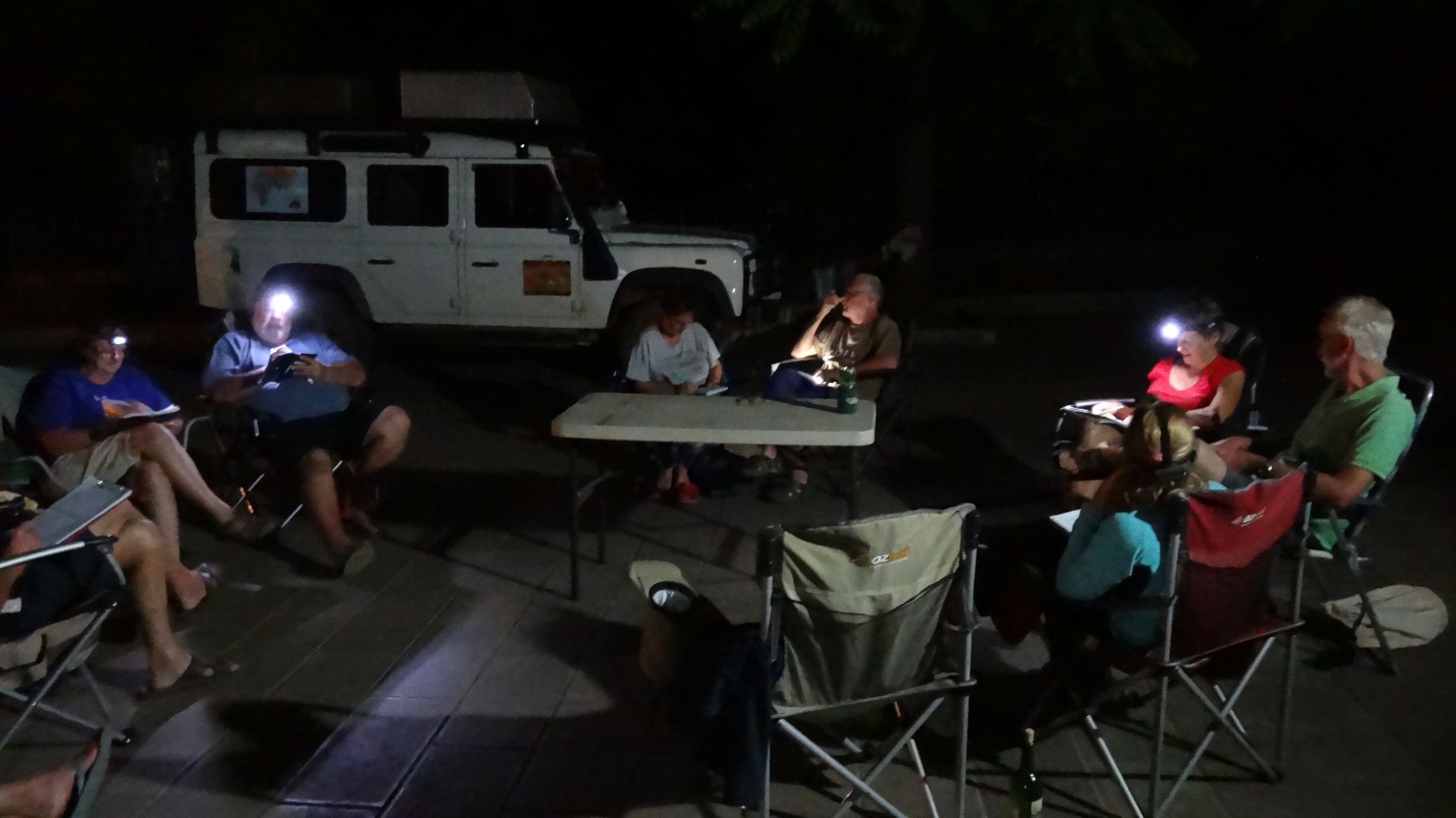 our first quiz night – do you know your partner? 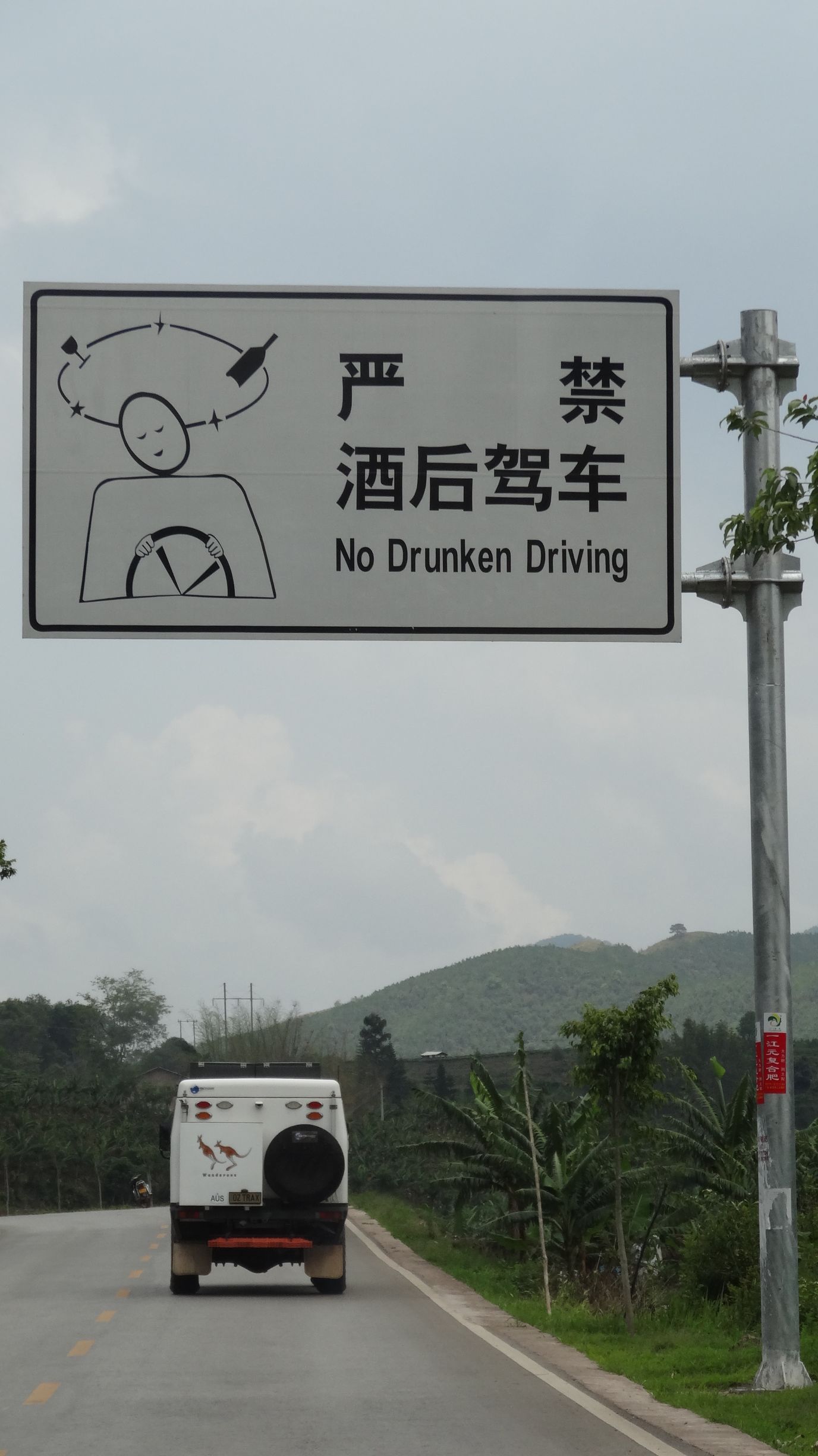 road signs are quite entertaining 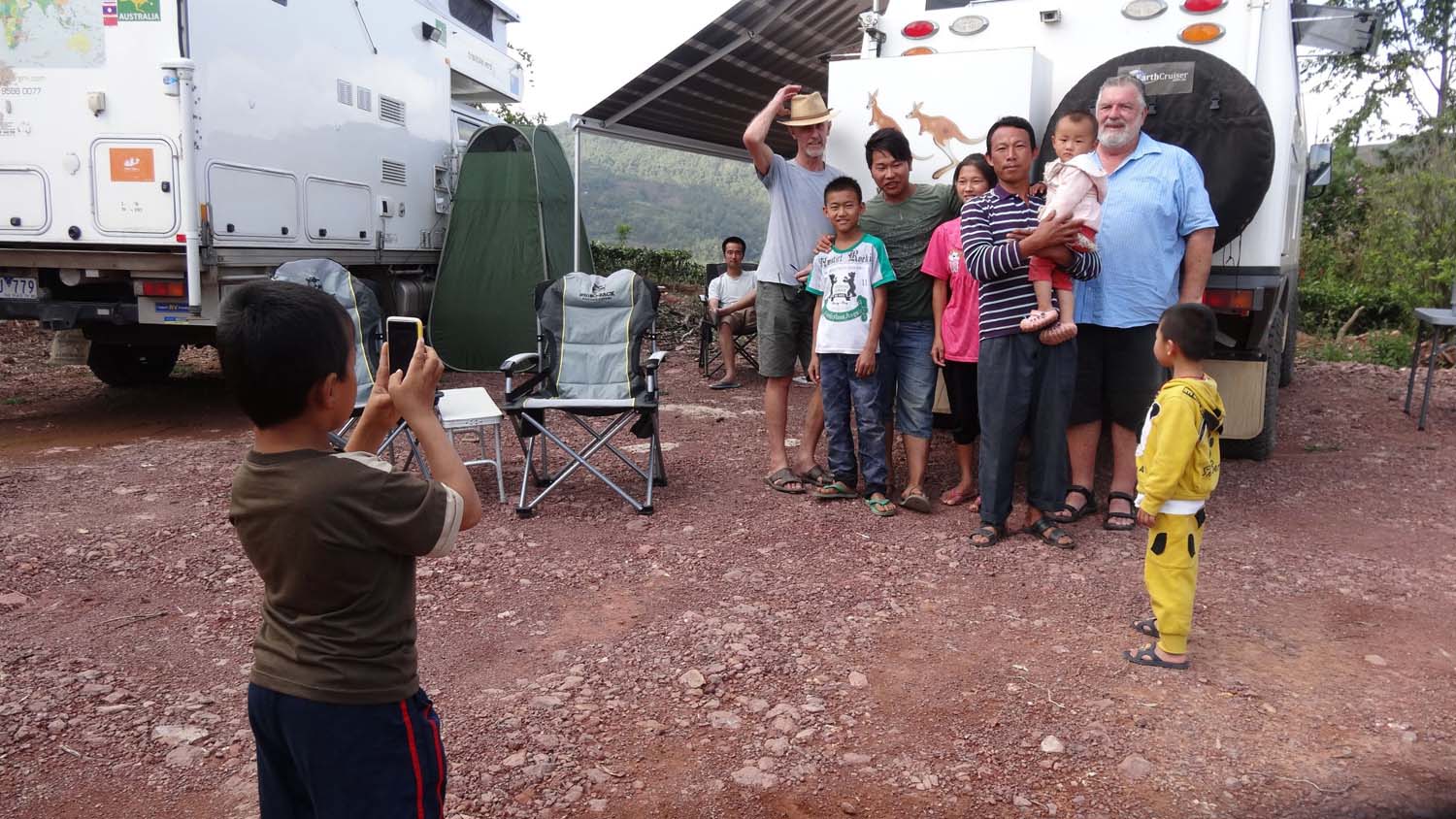 we’re all very popular for photos 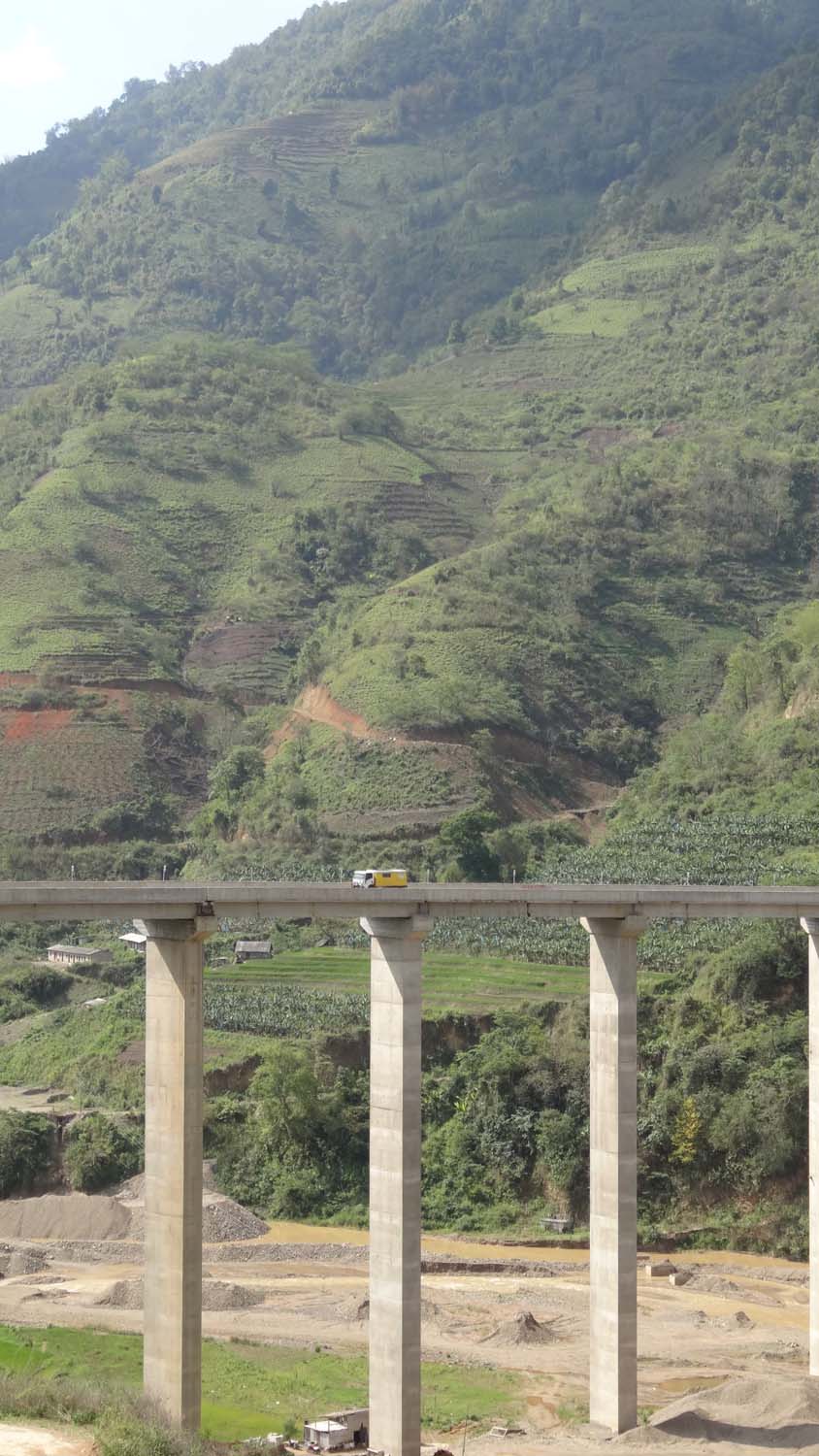 Convoy driving does provide great photo opportunities – the Bee (from Guy & Cheryl) on an impressive viaduct.