With eager anticipation Jude’s sister and her family arrived in Kenya one Saturday evening not so long ago. We picked them up from the airport in 2 cars as 7 people plus luggage would be too much even for our big car. 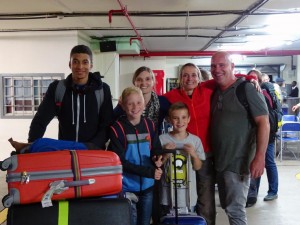 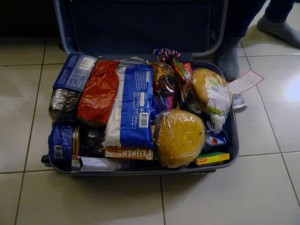 and they bring a whole suitcase full of Dutch goodies 🙂

The first night we served them our favourite Kenyan food, made by Evalyne, and celebrated Jens’ birthday. After a quick tour of the house we all went to bed as it had been a long day for them. The next day we wanted to take them to the Nairobi National Park, but unfortunately it was raining. We tried to quickly make other plans, but then the weather cleared up and we could head out anyway.

It was their first time ever on safari and it was fantastic to see the reactions to each new animal we saw. It started well with a mongoose and 2 lionesses right next to the road. A good sign for more amazing animal sightings in the coming 2 weeks. But of course we also enjoyed the zebras, giraffes and all the different types of antelopes. 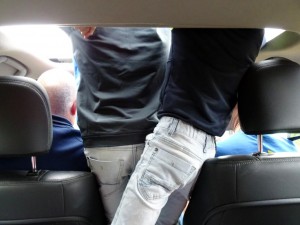 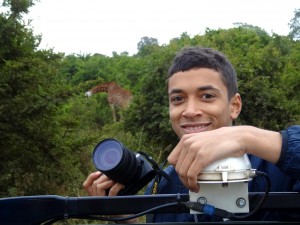 Jessie taking lots of photos, also of the giraffe behind him

After a quick picnic lunch and a stop at one of the viewpoints we were going to drive home via ‘Lions Dip’. This time it lived up to its name when Peter spotted the lions lying in the grass. We decided to stay and were very happy we did as a little later one of the lionesses decided to climb into a tree!! Amazing! Certainly not as agile and confident as a leopard goes up a tree, but she showed she is still a cat. 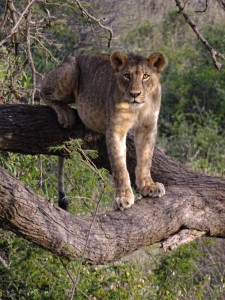 this lioness enjoys climbing trees after a feed to relax, check out how full her tummy is 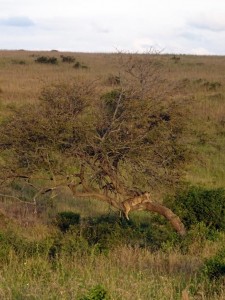 That night we had booked a table in Carnivore, a restaurant where the local nyama choma is served to tourists in a great way. They carve the meat straight onto your plate and also serve a good dawa (local cocktail). As we were still celebrating Jens’ birthday, we had also organised a cake to be brought out after our main course. Of course they brought it out with the entire staff, singing happy birthday accompanied by the local drums. It’s a real happening and Jens loved it. Mission accomplished 🙂 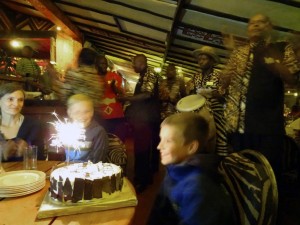 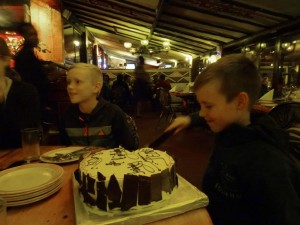 During the week days we showed them the usual things in and around Nairobi and even went up to Hell’s Gate National Park to walk and climb through the gorge. Dinner that day was at Camp Carnelley’s, a quaint little restaurant serving excellent food on the shores of Lake Naivasha. We were lucky with the animals again as a couple of hippos decided to pop up their heads very close to us as we were looking for them from the little jetty. 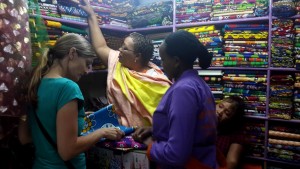 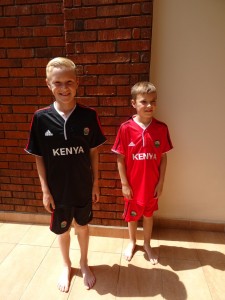 Niels & Jens in their new outfits 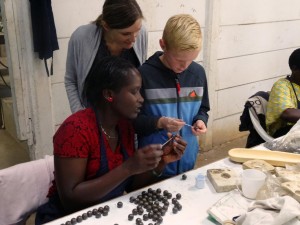 Niels learning how to make beads at Kazuri 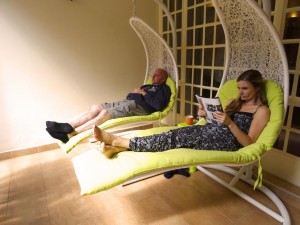 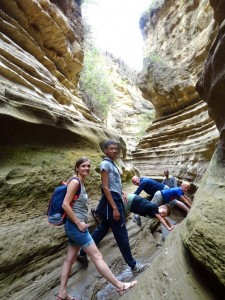 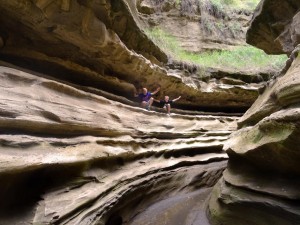 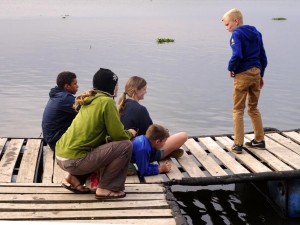 trying to spot some hippos in Lake Naivasha 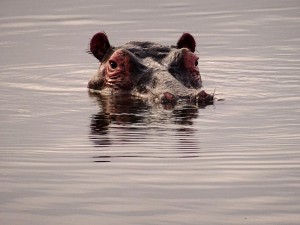 Jon had taken the Monday off, so we could go to the Mara on Saturday, Sunday and Monday. It was a surprise as they didn’t know where they were going, but Obama nearly messed up all our carefully made plans. Due to his visit to Kenya the roads around our house would be closed off for all traffic on Friday afternoon, Saturday and Sunday. But, this being Kenya, no details were made available and only rumours were doing the rounds. We decided to call the lodges where we were staying to see if we could change the days to Friday, Saturday and Sunday so we could leave before any potential road closures would keep us locked up in our compound all weekend! And it was lucky we did, as we heard later that indeed from Friday 2pm no traffic was allowed in or out of our street (Obama was staying in the hotel opposite our compound).

This meant that Friday morning we had to leave around 6AM. Our guide was going to meet us at an agreed location at 10AM and it would take us at least 3.5 hours to get there. The last section of the road is, as usual, a bit rough and poor Niels ended up car sick. But when we got to the lodge the car sickness was soon forgotten. Eagle View in the Naibosho conservancy is a luxury lodge with sensational views over the plains below. Each luxury tent has its own en-suite with an additional outdoor shower and the main common area overlooks the salt-lick below. 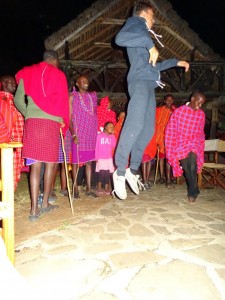 Jessie jumping higher than all the Maasai warriors

We were very lucky that weekend with the animal sightings, including seeing all the cats and even the Big 5 in one day. 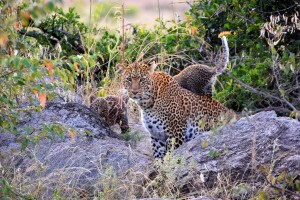 leopard with 2 cubs in the Naibosho conservancy 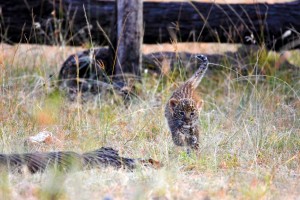 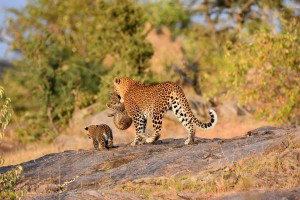 leopard carrying one of her cubs 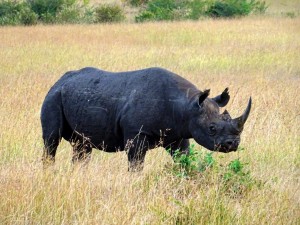 black rhino in the Mara Reserve

On our last day our guide took us to the Mara River. We wanted to see if we could see a crossing of the wildebeest or zebras as they go on their annual migration from Tanzania to Kenya. When we arrived at the river there were about 15 cars on our side, and another 10 or so at the other side. All waiting to see if the thousands of wildebeest gathered there would make a move. And then we spotted 3 lionesses in the tall grass, totally obscured for the wildebeest. This was exciting.

The lionesses slowly inched forwards bit-by-bit, we lost sight of them as soon as they lay down in the tall grass and could only see them when on the move. Either the wildebeest were going to cross the river or they would be chased by the lionesses. And then, al of a sudden, we saw the dust cloud coming up from the river. They had started to cross!!! Already we could see the first wildebeest swimming across the treacherous river and scrambling to get a foothold on the very steep opposite bank. 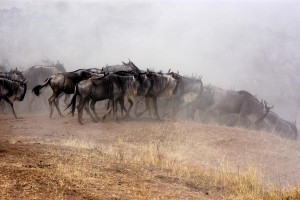 wildebeest crossing the Mara River in a huge dust cloud 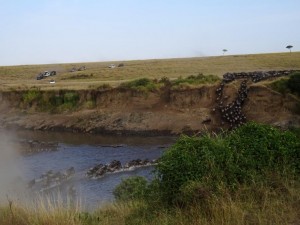 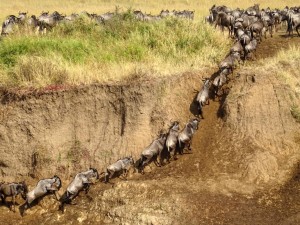 trying to get up the steep bank on the other side

Amazing, truly amazing. We have seen it a million times on television, yet nothing prepares you for seeing this spectacular event in real life. The dust, the sheer numbers, the horrendously steep banks, the calves desperately calling for their mothers as they frantically search for some grip to get up that imposing bank, the nervousness of the animals, the fear of what might at any moment launch out of the water and grab one of them, it is so much more intense when you are not sitting comfortably on your sofa in the living room, but instead are hanging on to a hot roof of a safari vehicle with the sun beating down your neck. A true lifetime experience, wow!

To give them a completely different experience, we took Sandra, Peter, Jessie, Niels & Jens to Umani Springs the second full weekend they were here. You might remember we were here already once before and absolutely loved it. And it didn’t disappoint. It felt there was hardly enough time to relax and enjoy the luxurious facilities, but we certainly tried. At first Niels and Jens were a bit shy of the elephants, but slowly they felt more comfortable around them. We saw them twice at 11AM as we were lucky and nobody was coming on the day we were leaving, we went to put them to bed at night and Jens even got up at 6AM to let them out of their stockades. 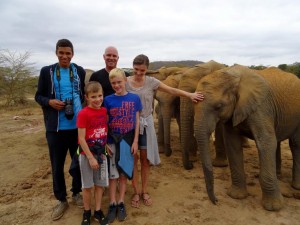 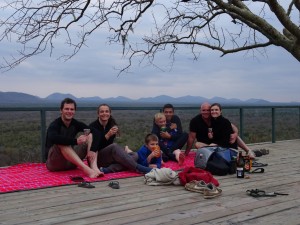 At night we watched the mongooses come and eat the cat food and we stayed up a bit later with Jessie for a beer before we all retired to our own houses, some enjoying a bath and others an outdoor shower (with the baby sykes monkeys watching). 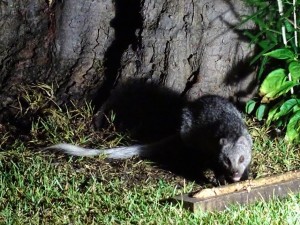 The white-tailed mongoose is the largest mongoose. It is a solitary animal and mostly nocturnal.

A final dip in the pool for Niels & Jens and then it was time to leave. But, after a few kilometres we had to turn around and get some help. A tree had fallen across the road, and although we managed to drag the smaller branch off the track, the tree wouldn’t budge. A few staff members brought their pangas (machettes) and within a few minutes had hacked the tree into pieces and cleared the road for us. Thank you! 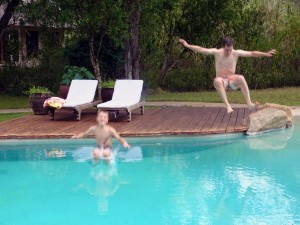 All too soon their time in Kenya was up and their first visit in 12 years had come to an end, hopefully more will follow! There were some last minute purchases squeezed into the suitcases and then it was time to load up the 2 cars again, one with people, the other one with suitcases. The goodbyes weren’t too hard as we would see them again in just over a week.