It was time to swap the walking boots for a paddle, and as a long weekend was coming up, it was the perfect time to spend some time exploring on the water and kayak-camping. The plan was to catch up with Simon (living in Sydney) and Wayne (living in Newcastle), and introduce Jon to the stunning Everglades on the Noosa River.

Unfortunately, due to the explosion of corona virus cases in Victoria, and the steady increase in cases as well in Sydney especially, but NSW on a whole as well, the border between NSW and Queensland was closed again after only having been open for a few weeks. This meant Simon and Wayne could no longer make it.

So it was just the four of us starting this adventure on a Friday morning. We had made a calculation error in the time needed to get there, so we were a little late at the start. Josh and Laurene were already there and had their canoe loaded and waiting. We quickly dropped off our surfskis at the water’s edge and loaded them up. As they had a canoe we could dump some of our food into their spacious hull, and soon we were on our way. 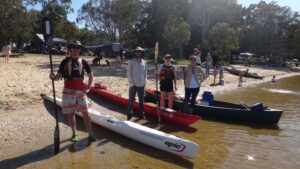 The wind usually comes in from the north, but we were lucky it hadn’t picked up yet and we were cruising along a glassy lake towards the pelicans at the sandbank near the Kinaba Education Centre where we stopped for a snack and a stretch of the legs. 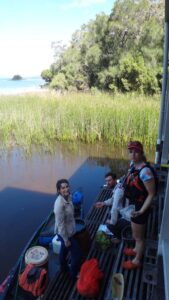 having a snack at the Kinaba education centre

We cruised on through the stunning Narrows, past Lake Como and Lake Cooloola to Harry’s Hut. This was our lunch spot where Josh spotted a cute little bird heading in and out of a small nest hollow. It was a bit of a struggle to get in and out of the surf skis at this jetty, they certainly hadn’t built it for low boats, but we managed to stay dry. 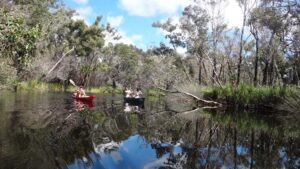 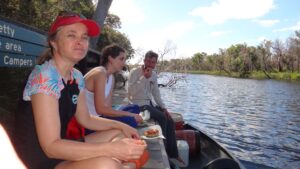 lunch at the Harry’s Hut area, the jetties are not very kayak and canoe friendly 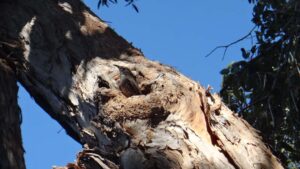 white-troated treecreeper building a nest inside the hollow

The wind had been picking up steadily and we were now having to work hard to keep a 4-5 km an hour pace. Although the river meanders a bit, the general direction is north, straight into the wind. That plus the current coming towards us meant for slow progress in the afternoon. We stopped briefly at campsite 4 (our spot for the second night) and saw it had a lovely white sandy beach instead of a jetty which is much nicer.

a quick stop at campsite 4 where we will be staying the next night with the crew, but we still have a bit to go so we don’t stay long

The paddle continued until we reached campsite 13, we had covered a whopping 27km on the first day. We quickly unloaded and put on some dry clothes so we could enjoy sundowners at our little lookout spot. The sun dipped quickly and we pitched our tents and prepared dinner. Through the gently swaying treetops we watched the incredible stars that night, spotting a few shooting stars as well as a couple of satellites. 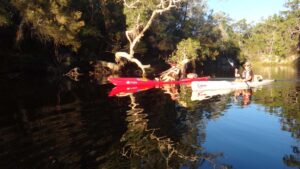 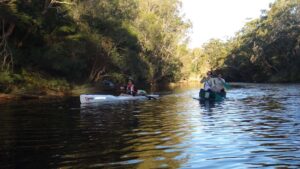 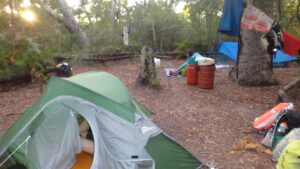 our camp at site 13, it was a total of 27km paddling into the headwind and the current to get here from Elanda Point

Apart from a branch that fell on Josh and Laurene’s tent (that sounded like a whole tree had fallen over) it was a perfect night. These nights are just incredible. Just the stars, some small nocturnal animals fossicking around the tents and the sounds of the bush. Magic.

In the morning we had breakfast before packing up most of the site. We left things there as we wanted to explore further up the river before heading ‘back’ to campsite 4. After campsite 15 (the last one), the river splits and we first went up the widest arm before turning around and heading up the narrow one. This was our favourite section of the whole river. The water was flowing, shallow, riddled with fallen logs and whole trees and crystal clear, but due to the tannins from the tea trees, it has a beautiful red colour. We paddled up a fair way until it was time to head back, enjoy morning tea at site 15, pick up our stuff from the campsite and cruise downstream to campsite 4. 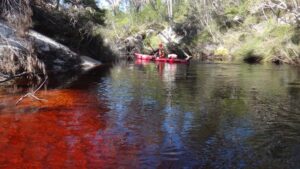 exploring further up river, the tea tree colour is really clear to see and turns the water red, beautiful 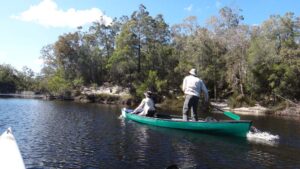 Josh tries paddling standing up, it goes quite well 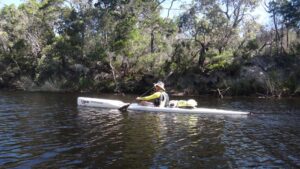 Wind in the back, current gently pushing us forward, we were making good progress. Josh and Laurene put up a small sail – it worked a treat if the wind with the right conditions. We ate lunch on ‘our’ beach and had a quick swim (the water is cold!) before we swapped our paddles for shoes (not Josh, he went barefoot) and went for a walk. The walk is part of the Cooloola Great Walk and we followed the river for a bit, before heading away and through heathland to the dunes. That’s where we turned around so we would be back on time for dinner at camp 4 where Mingyuan, Hugh, Chan, Eddie and Suzana had also arrived. On our way back we were treated to some rain and a stunning rainbow in the middle of fields of colourful flowers. 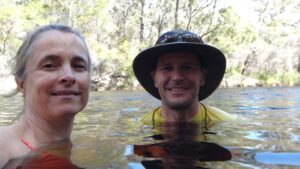 having a quick swim when we arrive at campsite 4

lunch on the beach at campsite 4, the rest of the crew haven’t arrived yet 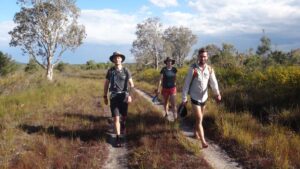 we go for a walk through the heather 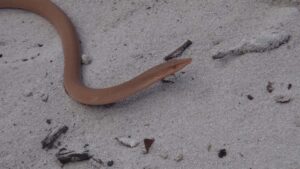 and find a Burton’s legless lizard cruising in the sand 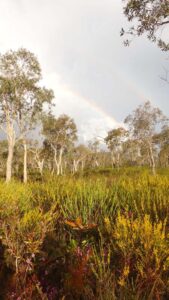 Rain continued to come down intermittently that night, forcing us to cook under Hugh and Mingyuan’s tarp. We shared some food, lots of stories and exercised our belly muscles with all the laughs. 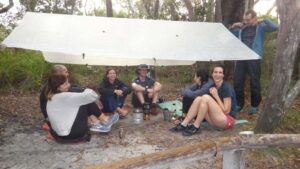 The next morning started cold, but it soon heated up as the sun rose higher. Eddie and Suzanna set off on the kayaks straight after breakfast, the rest of us first hiked to the massive sand dunes before packing up and loading the kayaks and canoes for the paddle home. We had lunch at Harry’s Hut and stopped for a snack and a short walk at Kinaba Education Centre. Unfortunately for us the usual northerly had decided to become a southerly, so we had the wind in our face again and progress was slower than expected. 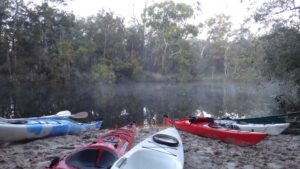 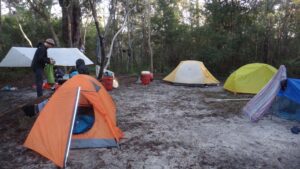 most of the tents, Jon is getting breakfast ready 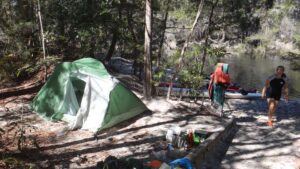 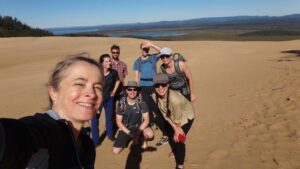 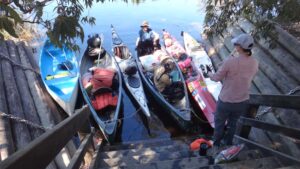 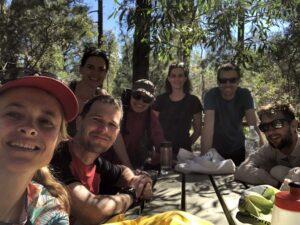 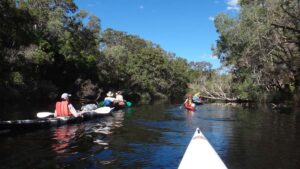 the group paddling back, Eddie and Suzanna are already further ahead

Around 4 we all reached Elanda Point, unpacked the boats, we loaded ours back onto Skinky and then it was time for a well-deserved beer from the microbrewery before we sat down for dinner. Together with Josh and Laurene we stopped in at Jonno and Angie’s place for a cuppa, before driving down the final stretch to get home. 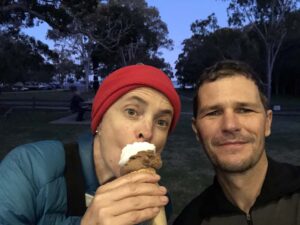