One Sunday morning we were picked up around 7am by Esther and Barbara, who inadvertently ended up in the wrong compound looking for us… Luckily we were already waiting outside when they popped out of our opposite neighbours’ gate.

We were all on our bikes, heading for the city where a large crowd was already gathering. The annual Cycle Caravan, sponsored by the EU (thanks to all tax-payers in Europe for the free helmets, reflectors, bicycles and high viz vests), is the day when Dar’s cyclists claim back the roads where it is normally to dangerous to ride.

We found many locals and some mzungus (white people) already waiting and the music pumping. We registered and then waited. And waited. And waited. The ride was supposed to start at 8am, but half an hour later we were still trying to find shade. Finally at 8.45 the first group left for their 8km ride. Most kids and the disabled community on their hand cycles were riding this loop. 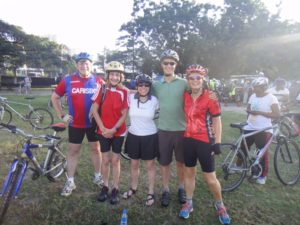 Dan, Barbara, Esther, Jon and Jude waiting for the start 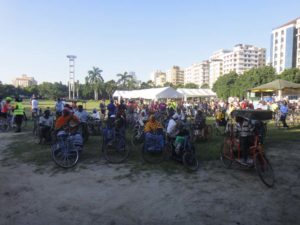 some of the disabled people of Dar on their tricycles

We waited a little longer and then finally we were heading out too, the Land Rover Defender heading out as our lead car with some good tunes blasting towards the riders.

The ride was slow, with several stops to let people catch up, including the Defender who had to pick up some diesel not even half way into the ride…

The atmosphere however was excellent, the music uplifting, and we enjoyed the slow ride watching all sorts of people  on their decorated and pimped up bikes. There were even 3 unicyclists in the mix. 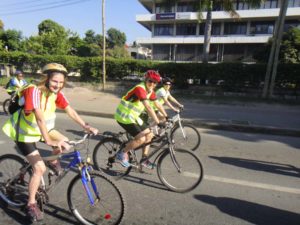 Barbara, Jude and Esther cruising on the empty streets 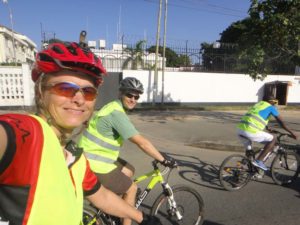 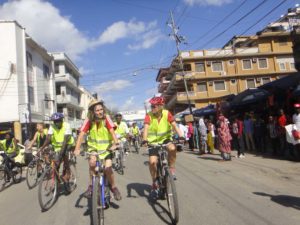 When we arrived back at the gate the four of us decided to keep on riding straight back to the peninsula for a second breakfast at Makuti. Dan joined us too and we enjoyed cool drinks and some pretty good food. Around lunch time we cycled home to jump in the shower, happy we had supported cycling in Dar – a worthy cause for sure.