Stunning coastal scenery and, lucky for us, basking in brilliant sunshine. A place to spend a summer holiday, preferably with a boat so you can access the many islands dotted in front of the coastline.

Our drive along the Adriatic Sea went through Albania, Montenegro, Bosnia-Hercegovina (all 10km of it), Croatia and Slovenia. As we had so little time left before Christmas, we knew we couldn’t do justice to any of these countries. We had to drive through, and could only spent a few hours sightseeing in some of its picturesque towns.

In Albania we stayed clear of the over-development along the Adriatic Sea, instead heading inland on tiny, windy mountain trails hour after hour, shared with most of Europe’s second hand Mercedes’. Jude loved the fact we were on bad roads again. We stopped in Gjirokastra and wandered around the old town, checking out the castle, tasting some homemade raki and trying to work out what is so special about their so called tower houses. 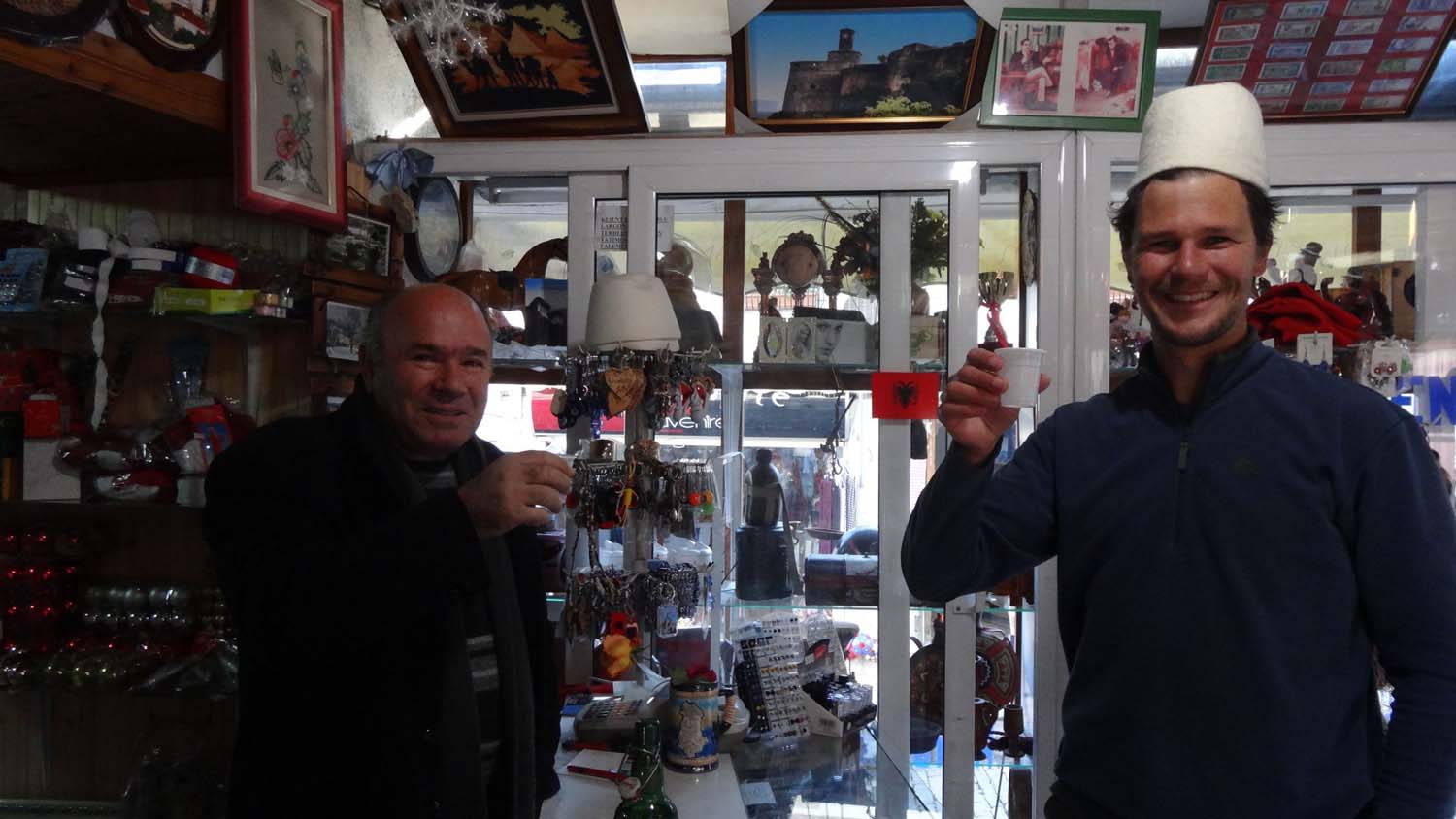 On our way to Montenegro we drove through Berat, the town of a thousand windows, which to us looked to be a grand claim made by the local tourist marketing department. We weren’t impressed, or maybe we have just been spoilt in the past months? 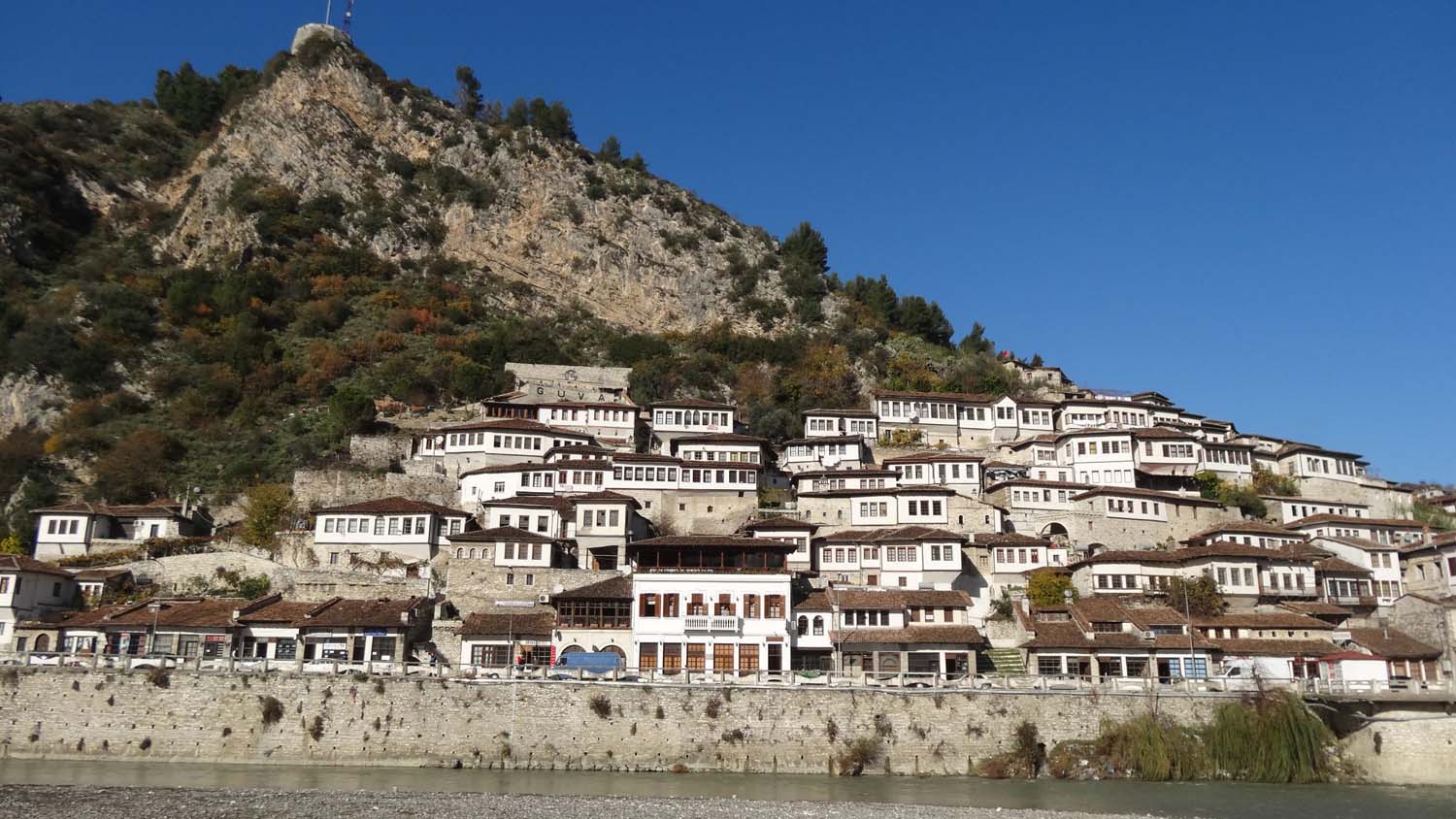 Albania sadly didn’t leave a great impression on us. It seems the country is going through explosive development without any planning and as a result the appalling roads are constantly lined with ugly car showrooms and petrol stations. And Jon got ripped off while filling-up, which sealed our view on the place. 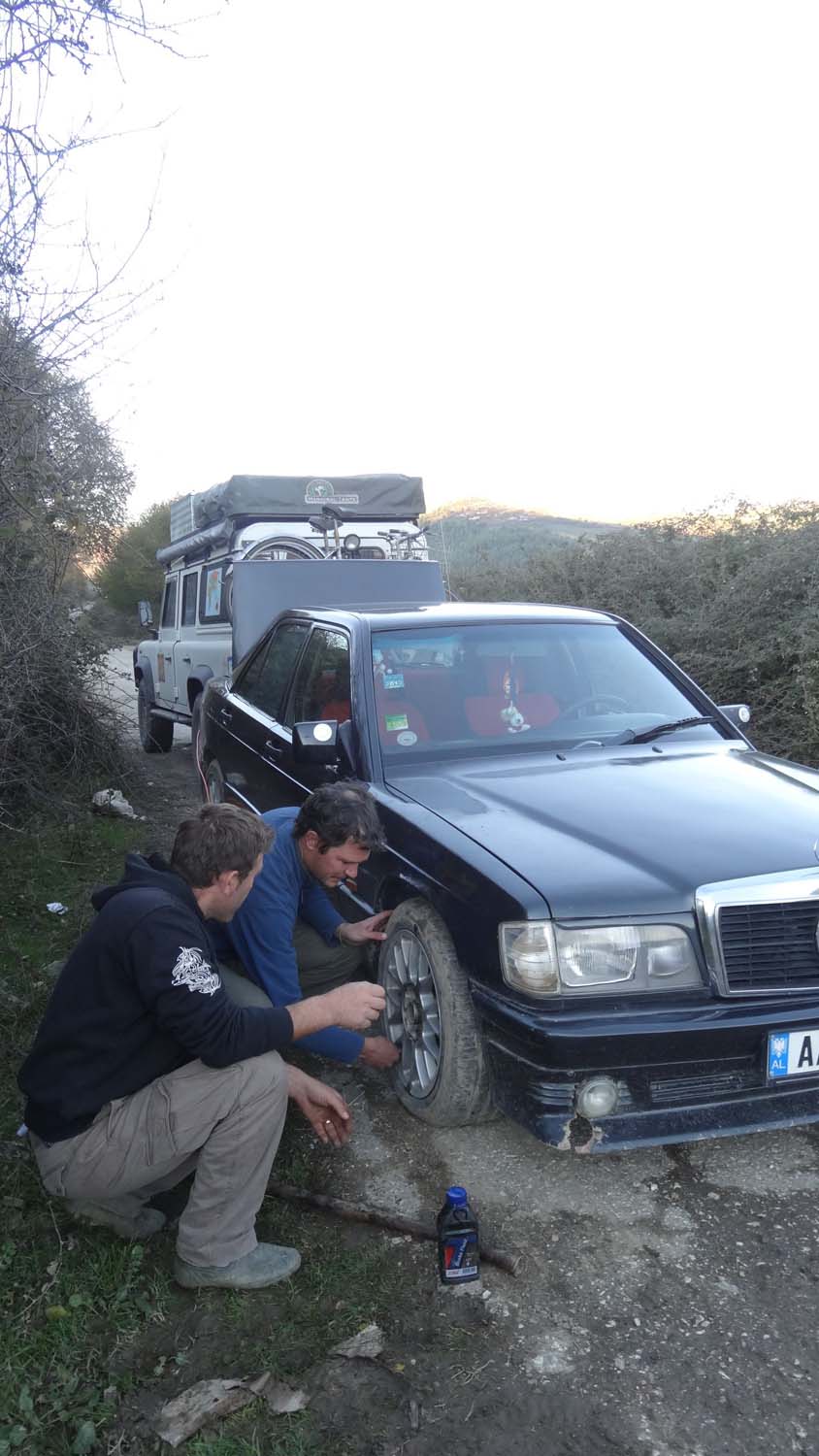 helping out the locals 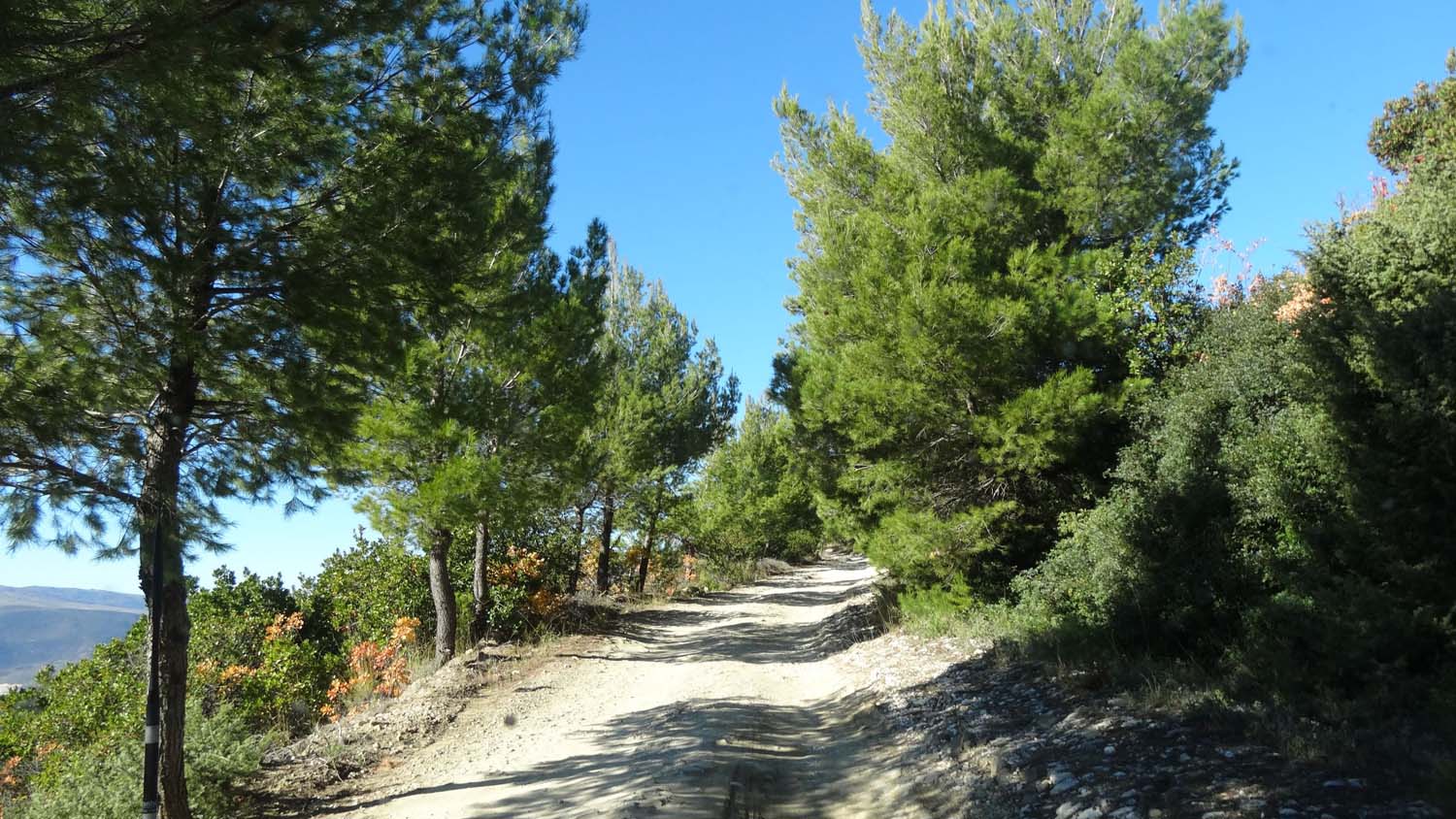 windy, narrow tracks in the mountains of Albania – a joy to drive (according to Jude)

Next on the Adriatic tour was Montenegro – country number 18 of the trip. We made a stop in Budva, the first of many beautiful medieval walled cities dotted along the coast, followed by a stop to look at the 15th century island village of Sveti Stefan. The island was originally a fishing village, but has now been converted into a hotel – cottages will set you back 2000 Euro per night, which was just a little outside of our budget…. Instead, we found a lovely campsite right next to the sea with a great fish restaurant where we were the only guests for dinner. It was perfect to hide during the thunderstorm that swept over the coast around 5pm. By the time we left the restaurant it was dry and all the stars were out again. 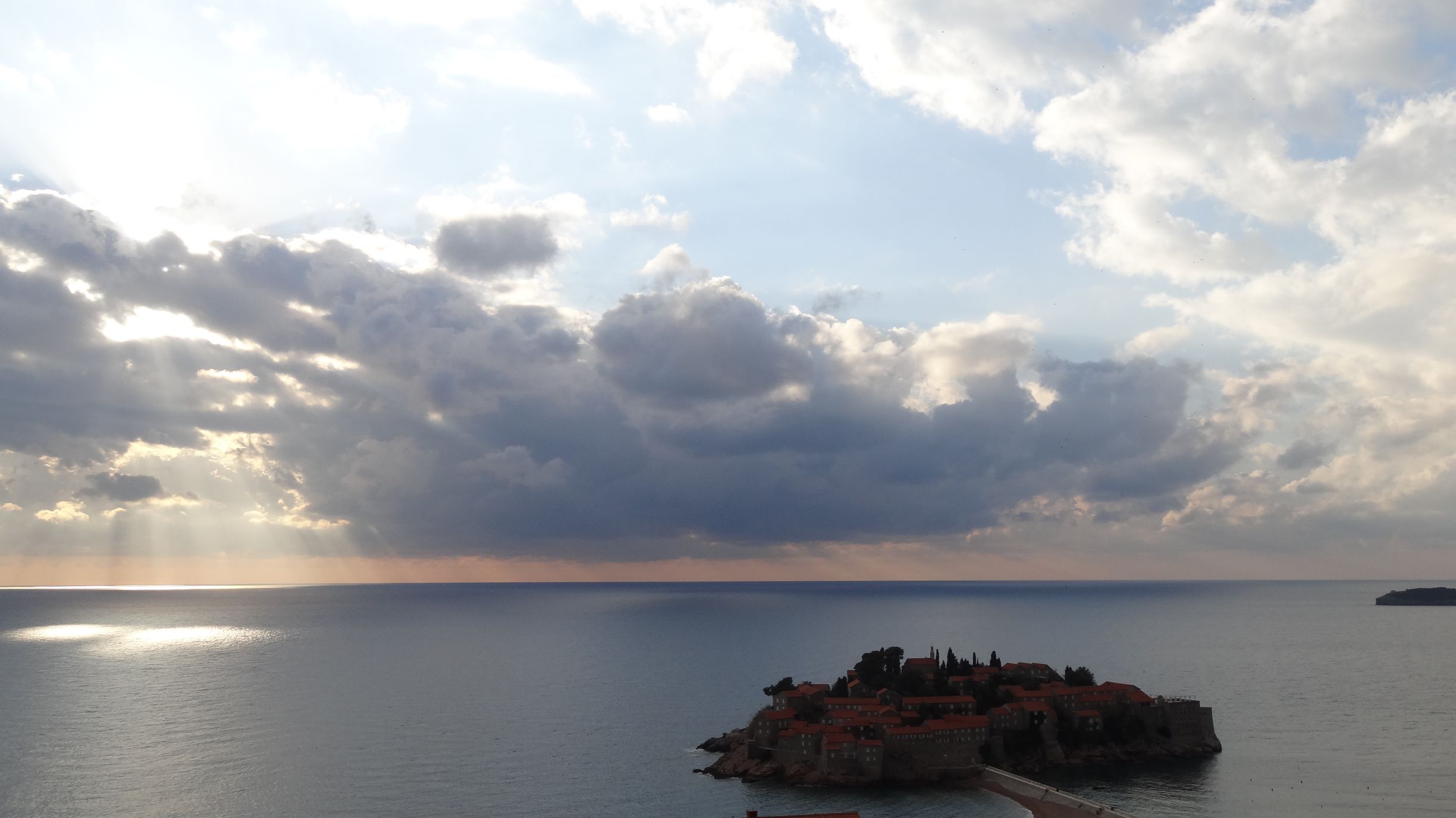 Sveti Stefan – once a fishing town, now an island hotel 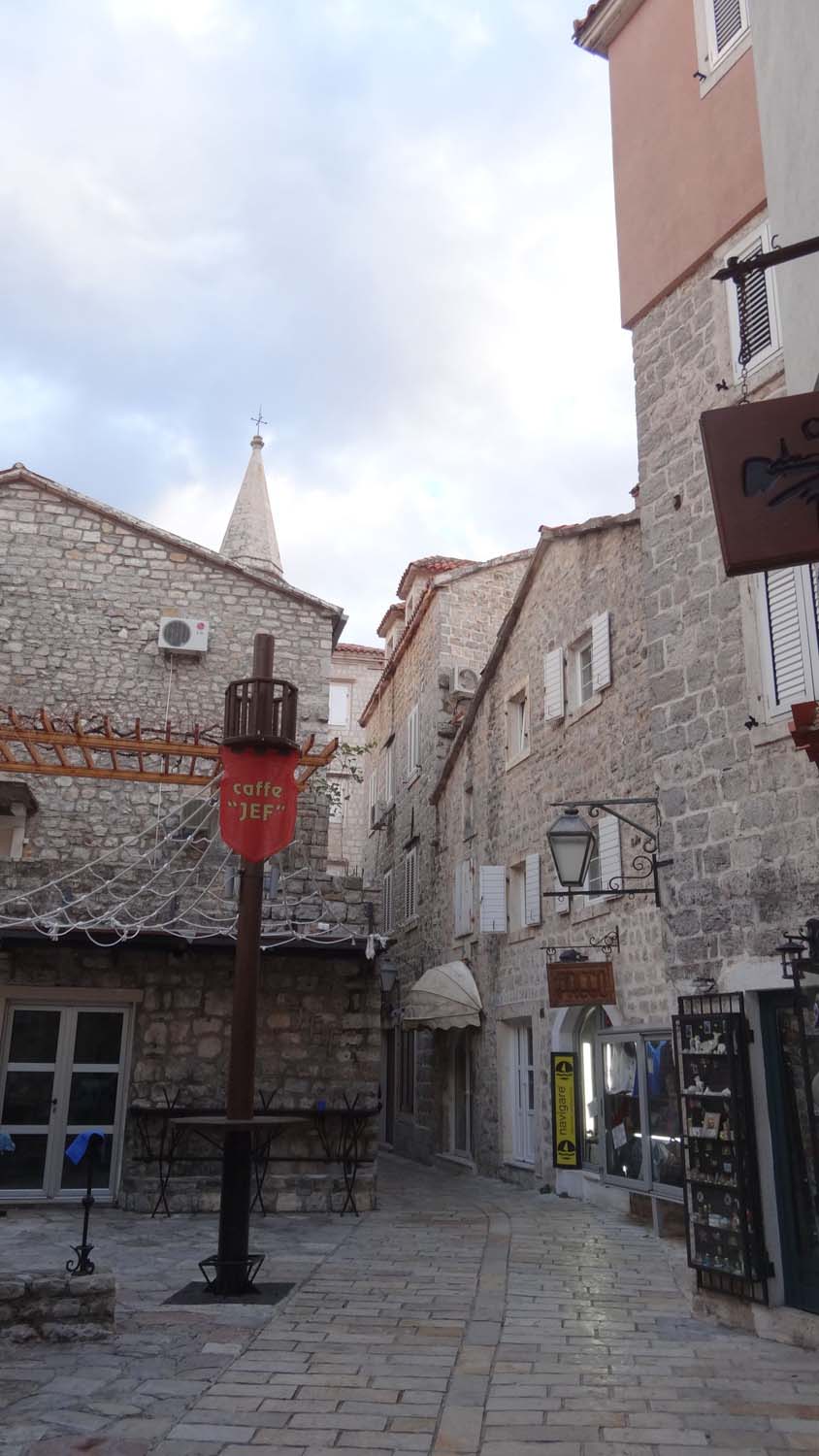 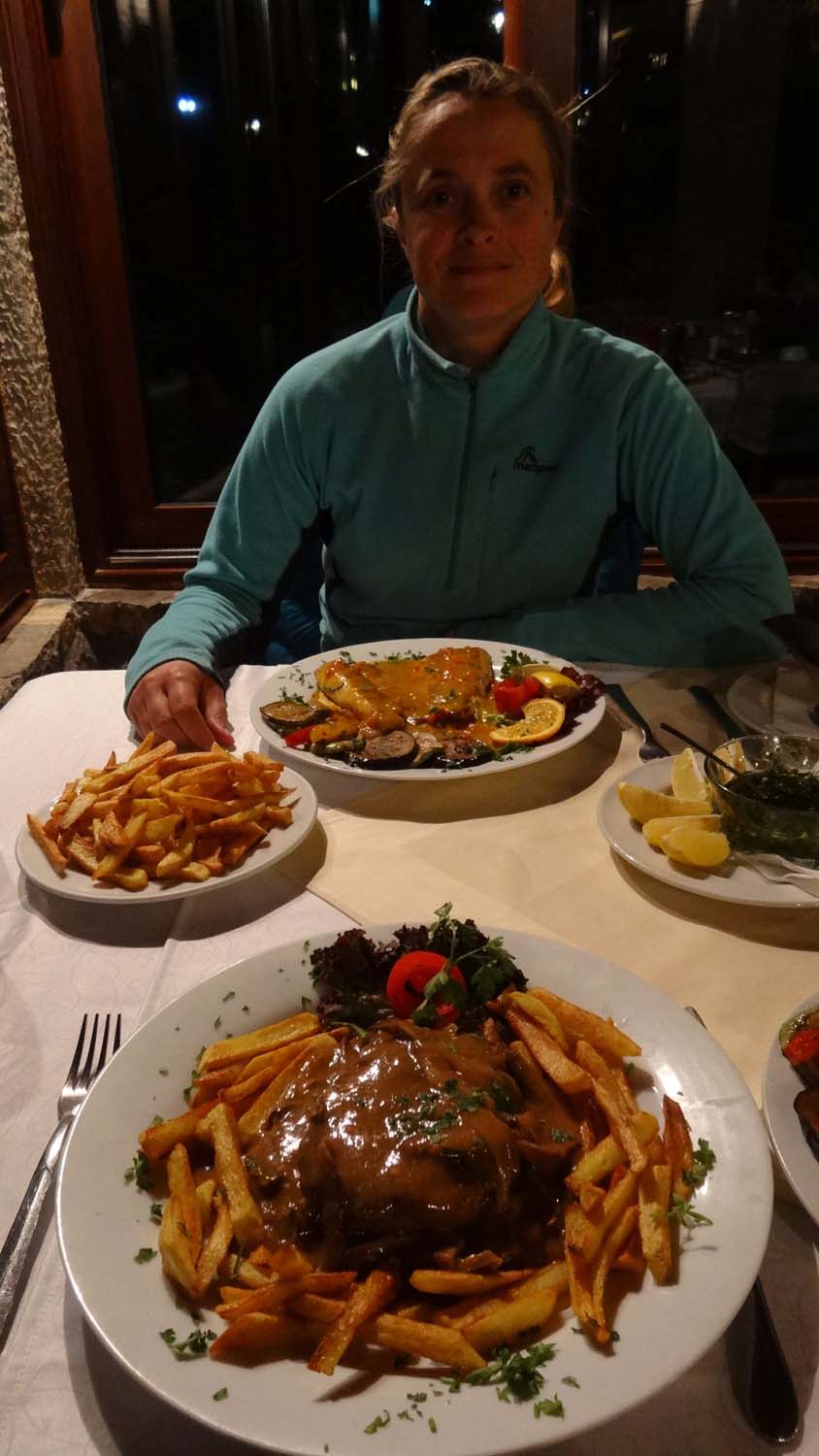 Montenegro is the next gastronomic destination: we enjoyed a delicious dinner whilst a thunderstorm rages outside

We whizzed past the Bay of Kotor, Europe’s southernmost fjord, on the way to Croatia. Our friend Martina had made some suggestions for Croatia and we tried to see as much as possible of her list. Dubrovnik, Sibenik and Zadar were the towns we stopped at. They all have quaint old walled centres, with narrow, windy marbled streets with lots of little shops, restaurants and red roofed houses. They look stunning at sunset, framed by the Adriatic Sea and the surrounding mountains. 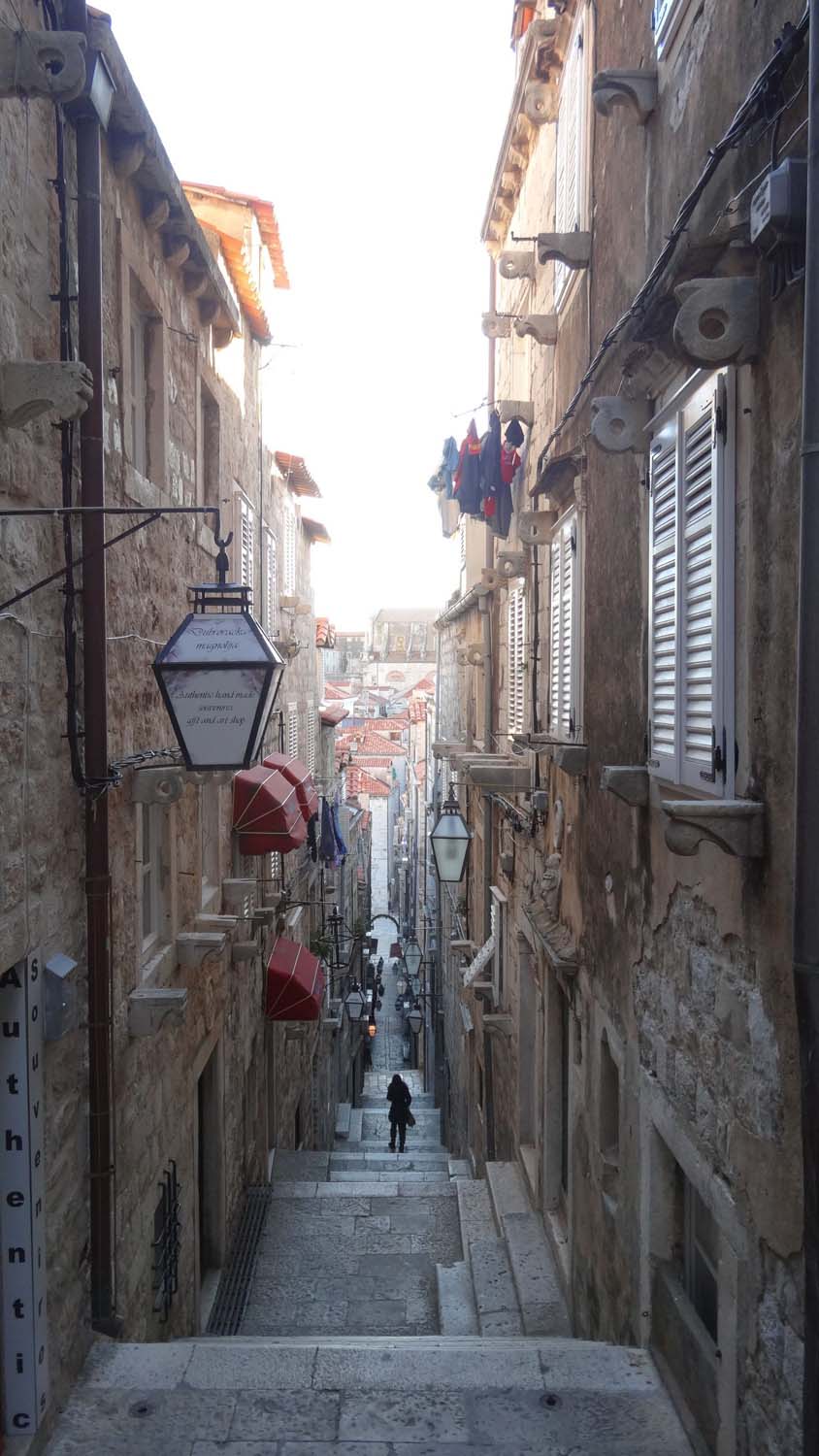 Dubrovnik – not a great place for a wheelchair, but it’s a stunning old town 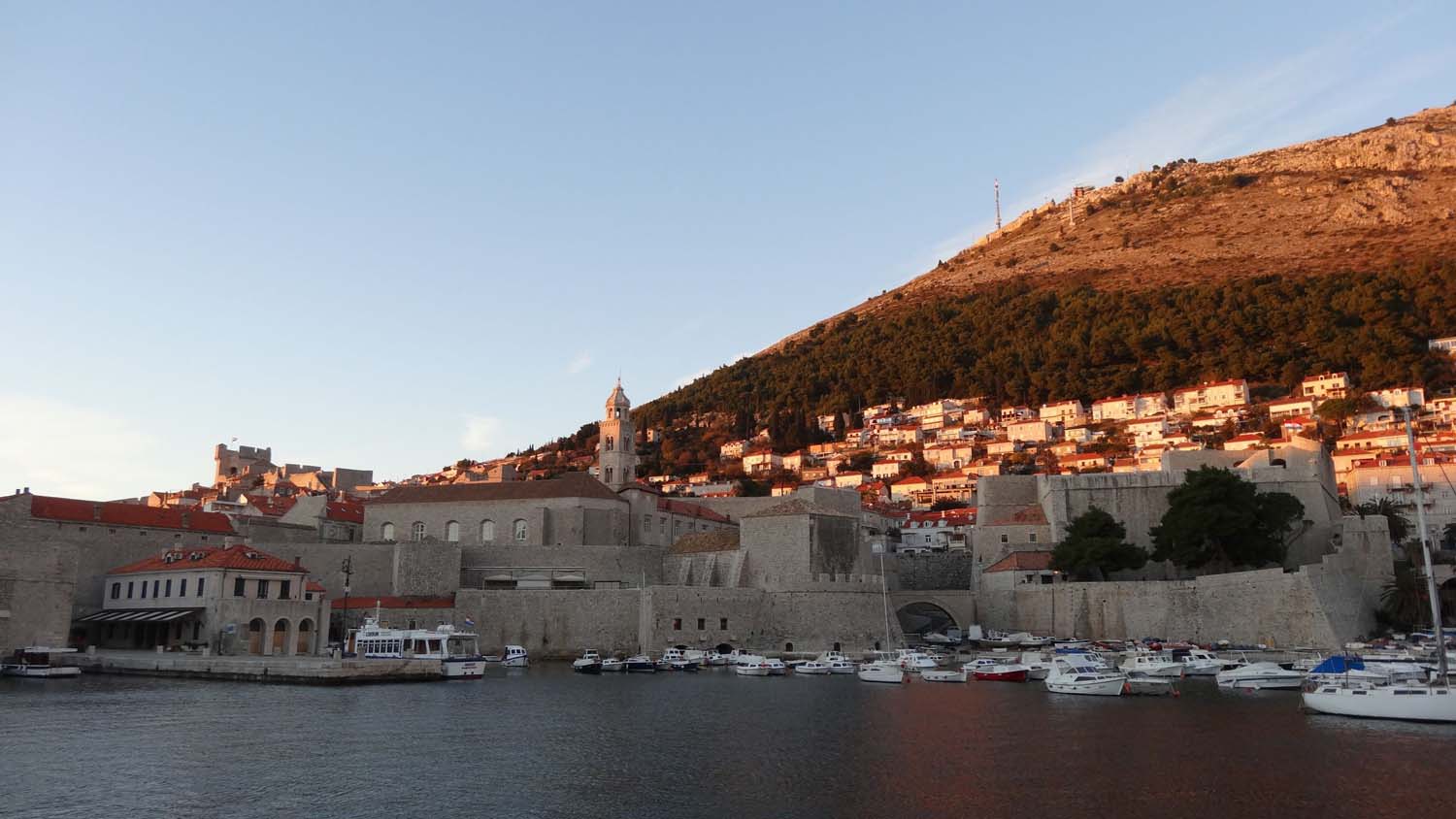 view of the harbour and some of the fortified walls 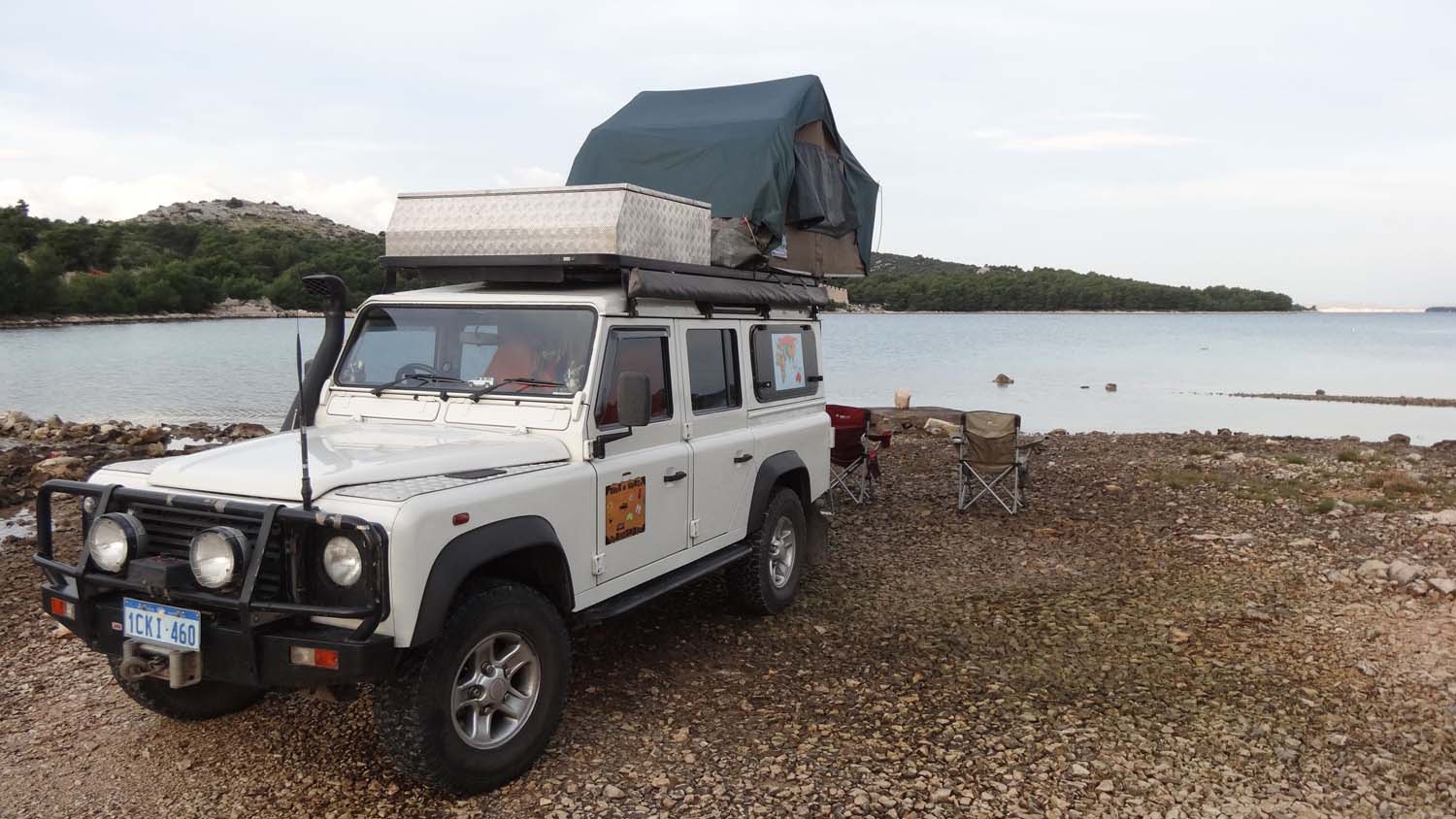 our secluded campsite in Croatia, the only little ‘beach’ we found accessible for cars

One of the most stunning drives of the trip was northwards from Dubrovnik. The road hugs the stunning coasting towards Split and on this particular sunny Sunday morning we had the road to ourselves. A red sports car would have been an improvement, but we loved the views from Lara over endless bays and offshore islands all perfectly surrounded by the clear blue Adriatic. On this stretch, we crossed a whole 10km’s of Bosnia-Herzegovina as well. Obviously they negotiated a sliver of coastline as part of the peace plans. Despite the fact that they are not a EU member state, they had no interest in our passports! 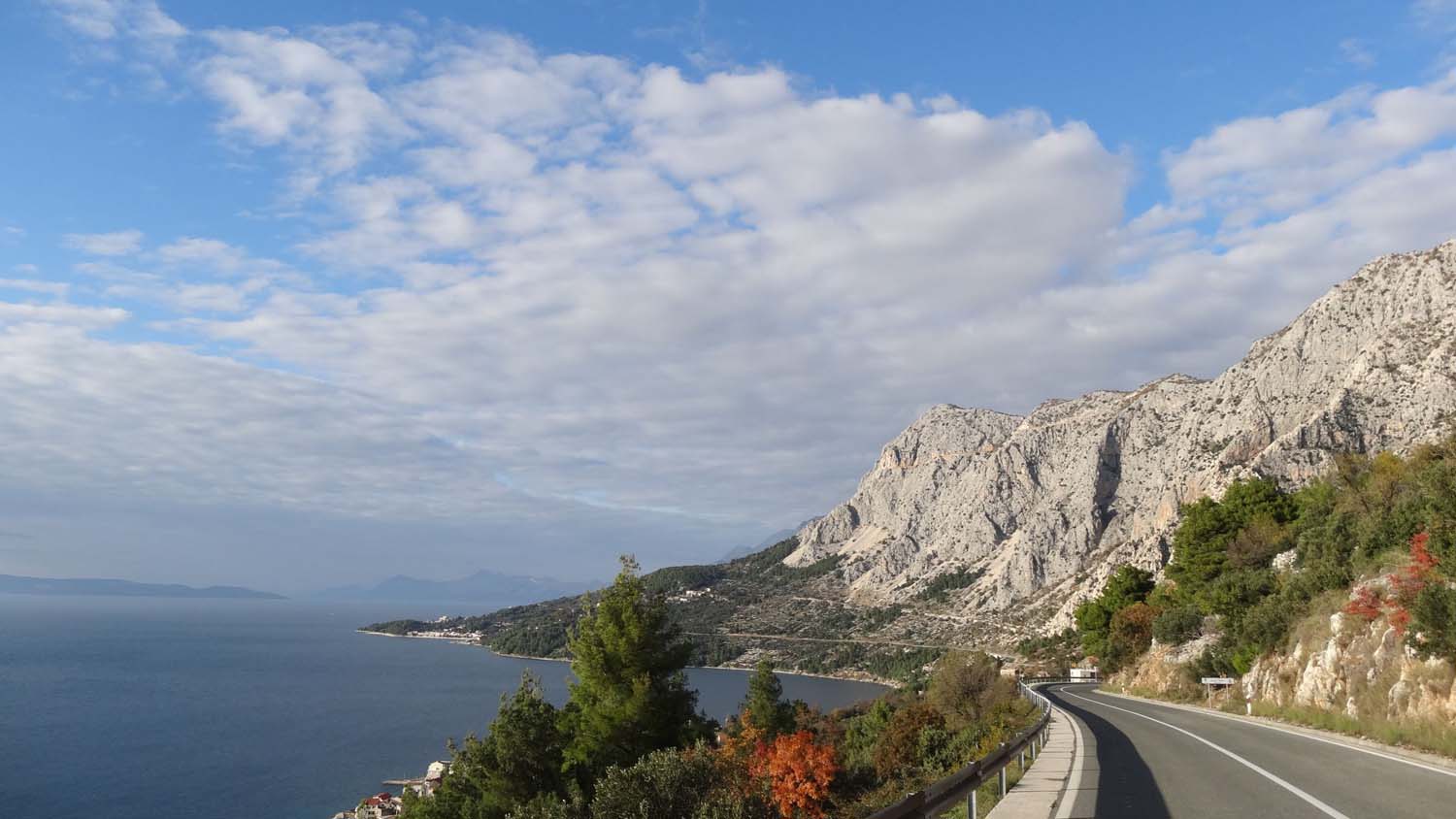 In Sibenik we had to check with the locals where we found the cheese bureks Martina had been telling us about. We were escorted to the local bakery and were treated to a man’s life story and some interesting details about Sibenik along the way – neither the friendliness of the locals nor the bureks disappointed. 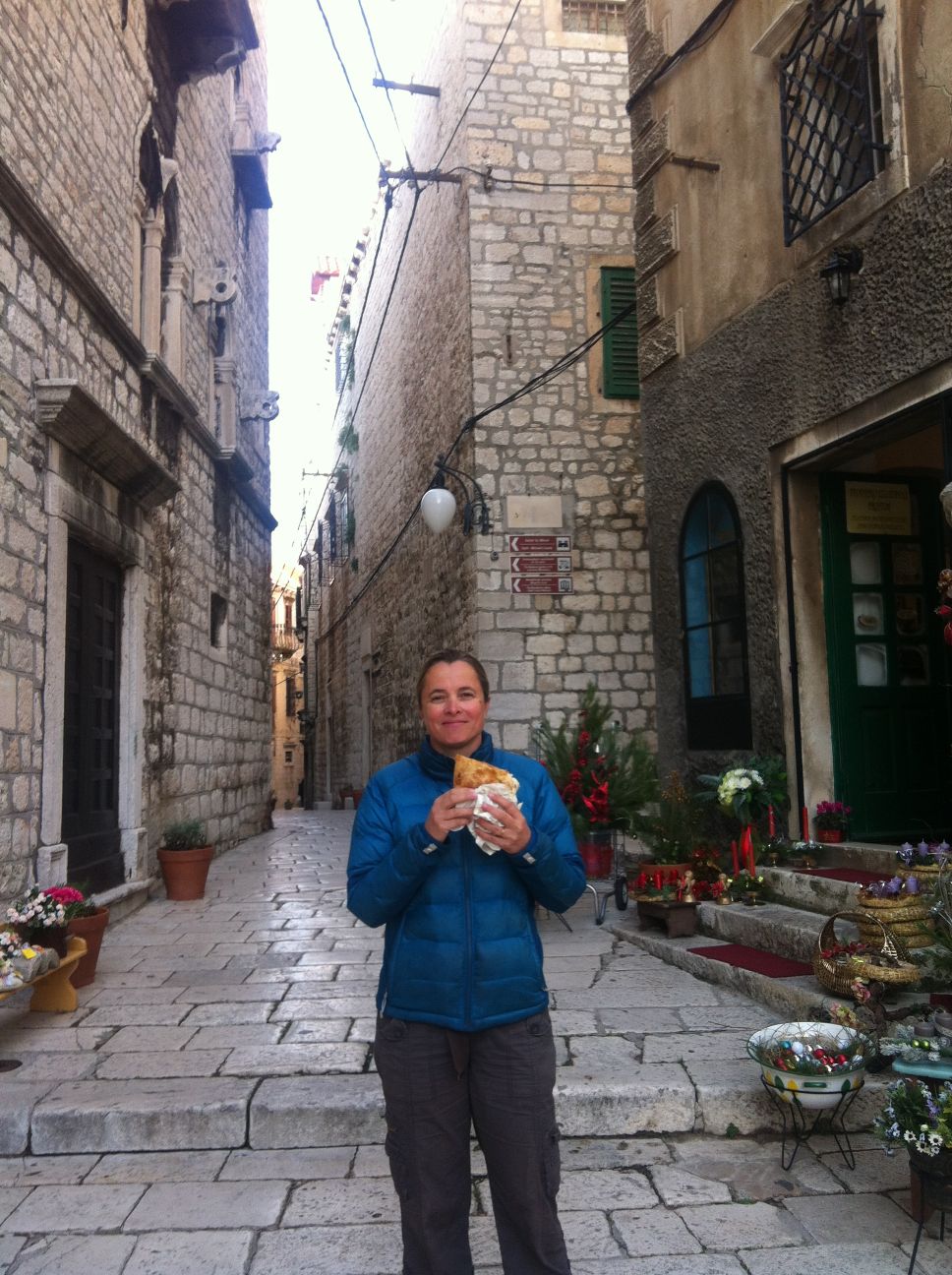 cheese bureks in Sibenik – thanks for the tip Martina! 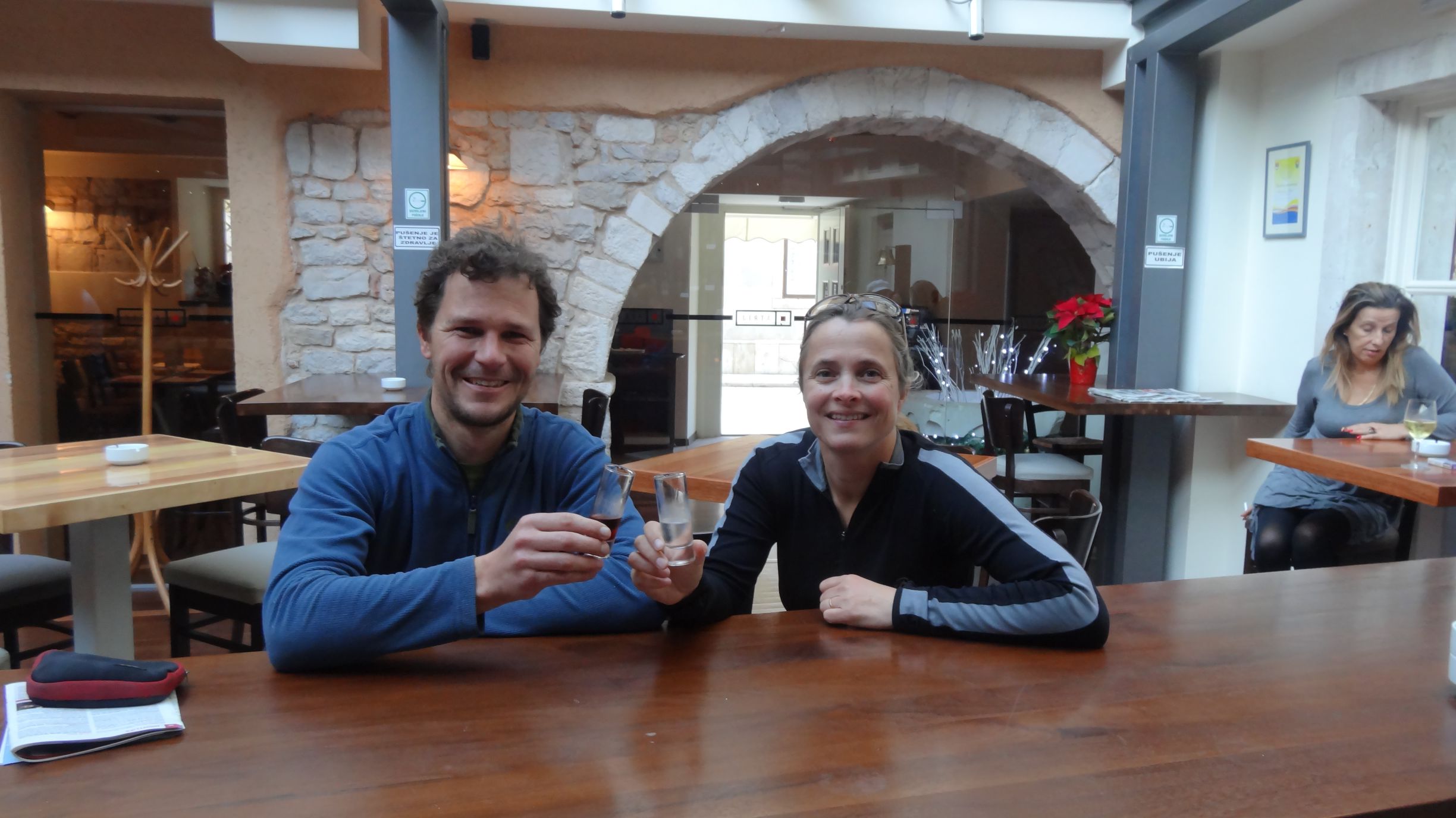 We decided it was worth the detour to southern Europe’s oldest national park: Plitvice Lakes. Climbing from the coast we soon encountered snow and then found a lovely camp site on a small forest track, amongst some pretty interesting looking footprints. We were careful to make sure we weren’t attracting any bears with our cooking smells. Perhaps they had already begun their winter hibernation? It was a cold, clear night but with our sleeping bags and duvet we were very comfortable in the tent. 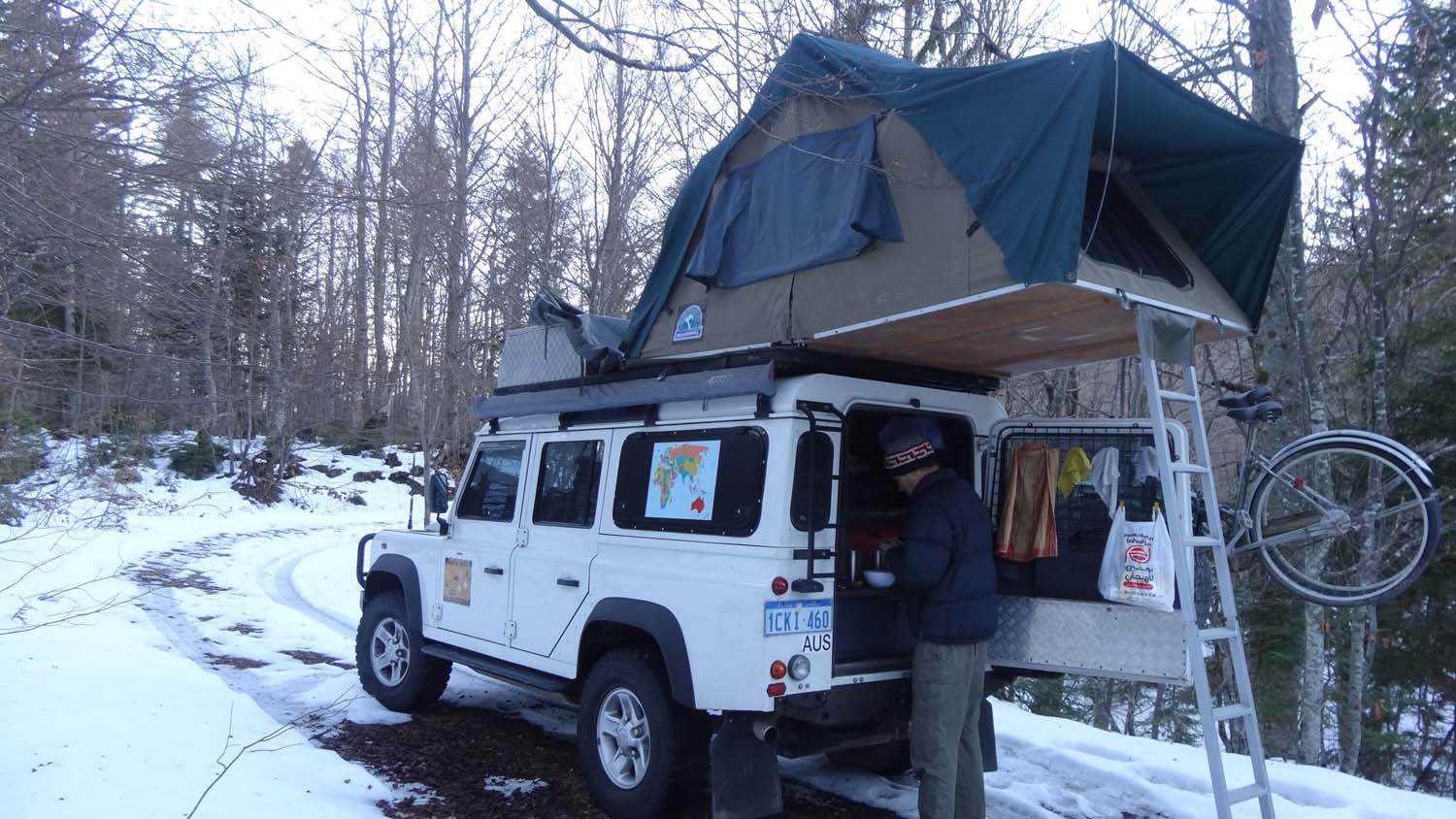 The next morning we drove the few remaining kilometers to the Lakes. “The upper lakes are closed”, was what we were told when we bought our tickets at the entrance gate. This meant that half the park was closed.

We headed off, a little annoyed about being limited to the lower lakes and being charged full price for the privilege. The walk down, past the main waterfall and the first set of bottom lakes was stunning. Moss and algae form natural dam walls, creating a series of lakes and cascades which cut through the middle of a beautiful karst region. The biggest lake is crossed by boat, and we arrived just in time, which was lucky as it only goes once an hour. 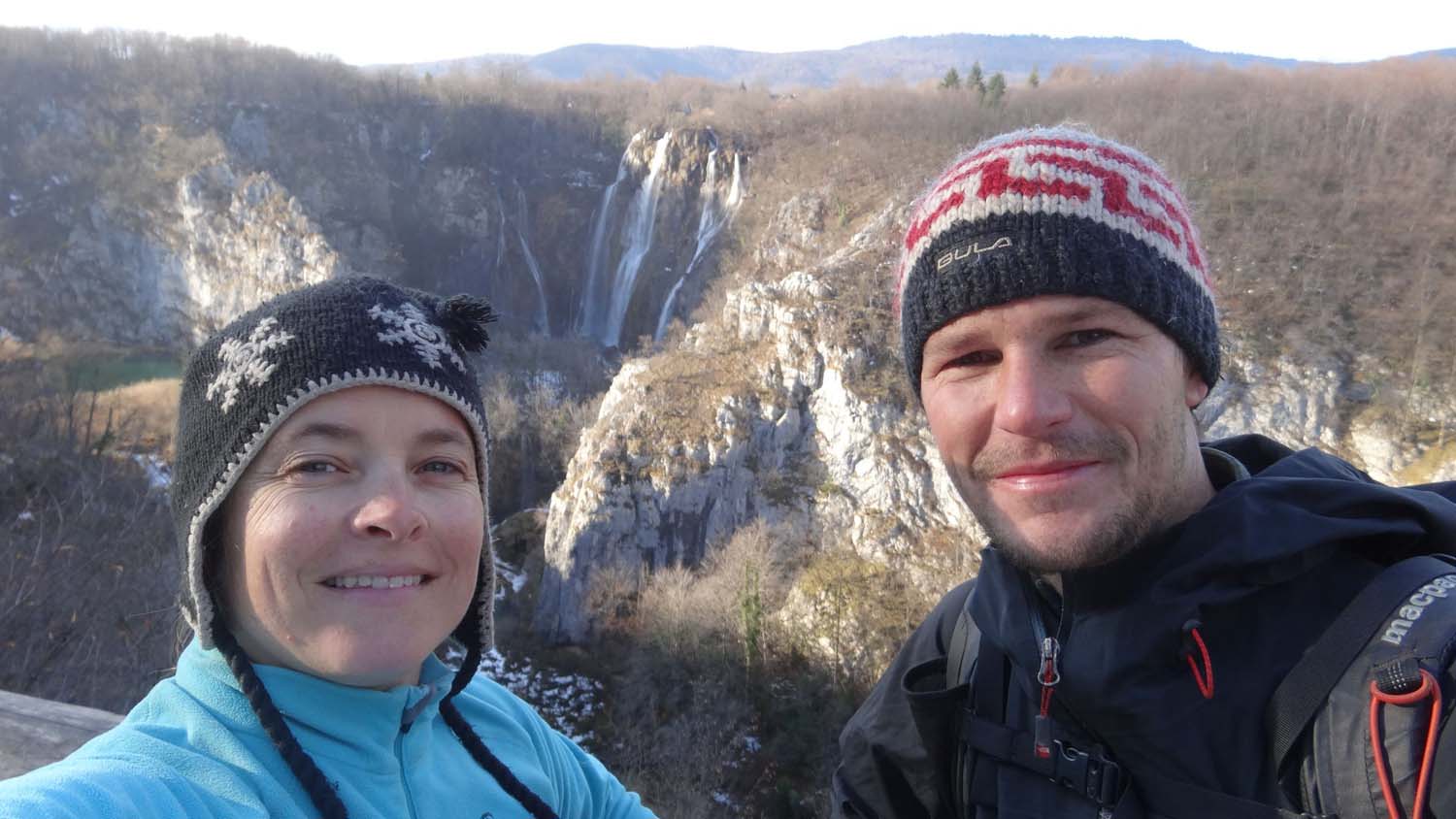 overlooking the main waterfall at the Plitvice Lakes

But when we reached the start of the ‘closed’ upper lakes on the other side, there were no ‘closed’ signs so … we trotted off down the road, hoping nobody would call us back… We had to follow the tarmac road for a few kilometers before we could get onto the actual trails around the lakes, but it was worth it. The lakes are stunning and having them to ourselves was magical, with the patches of snow still laying around adding to the fairytale scenery as well. 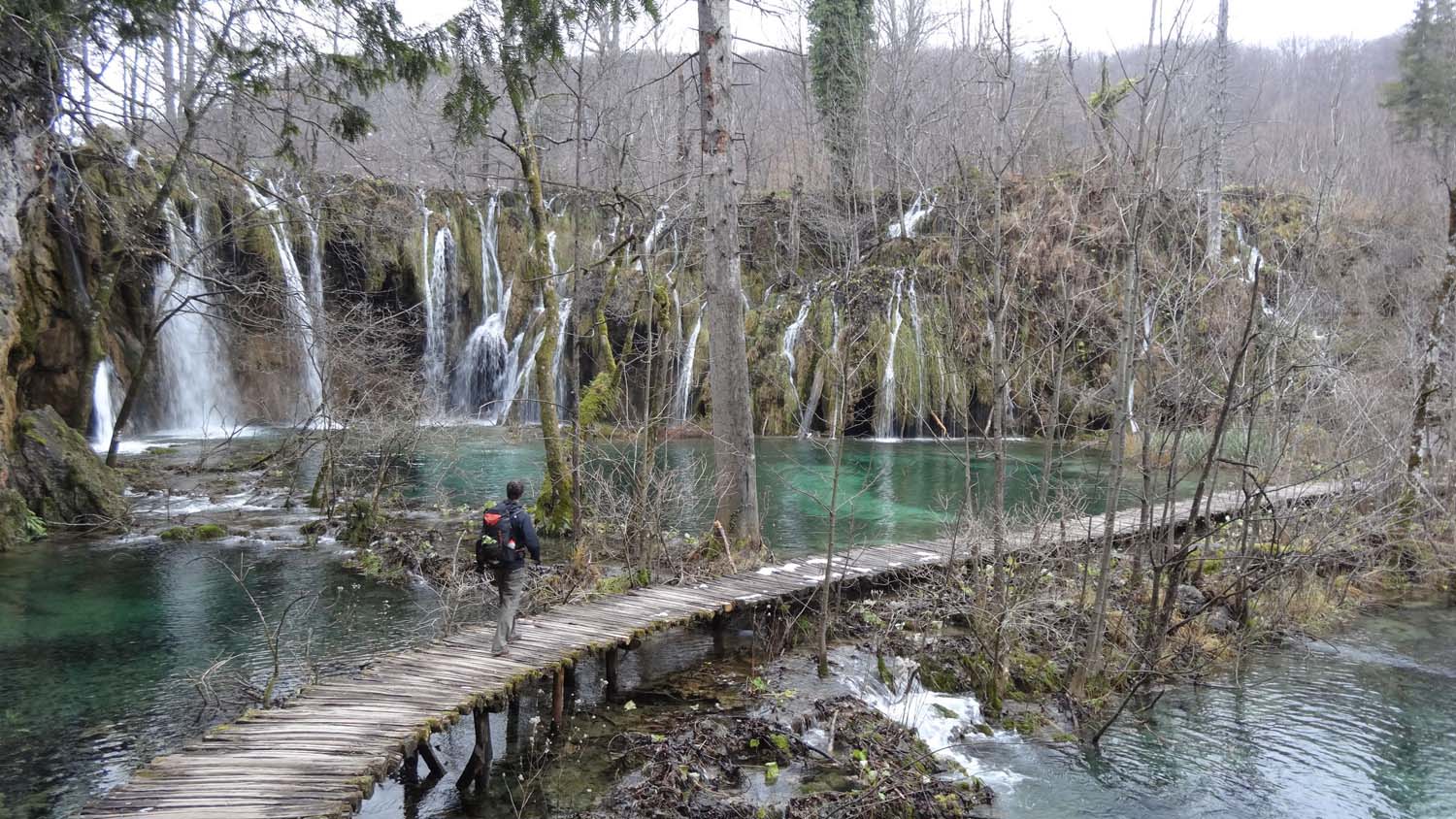 our favourite spot at the Plitvice Lakes 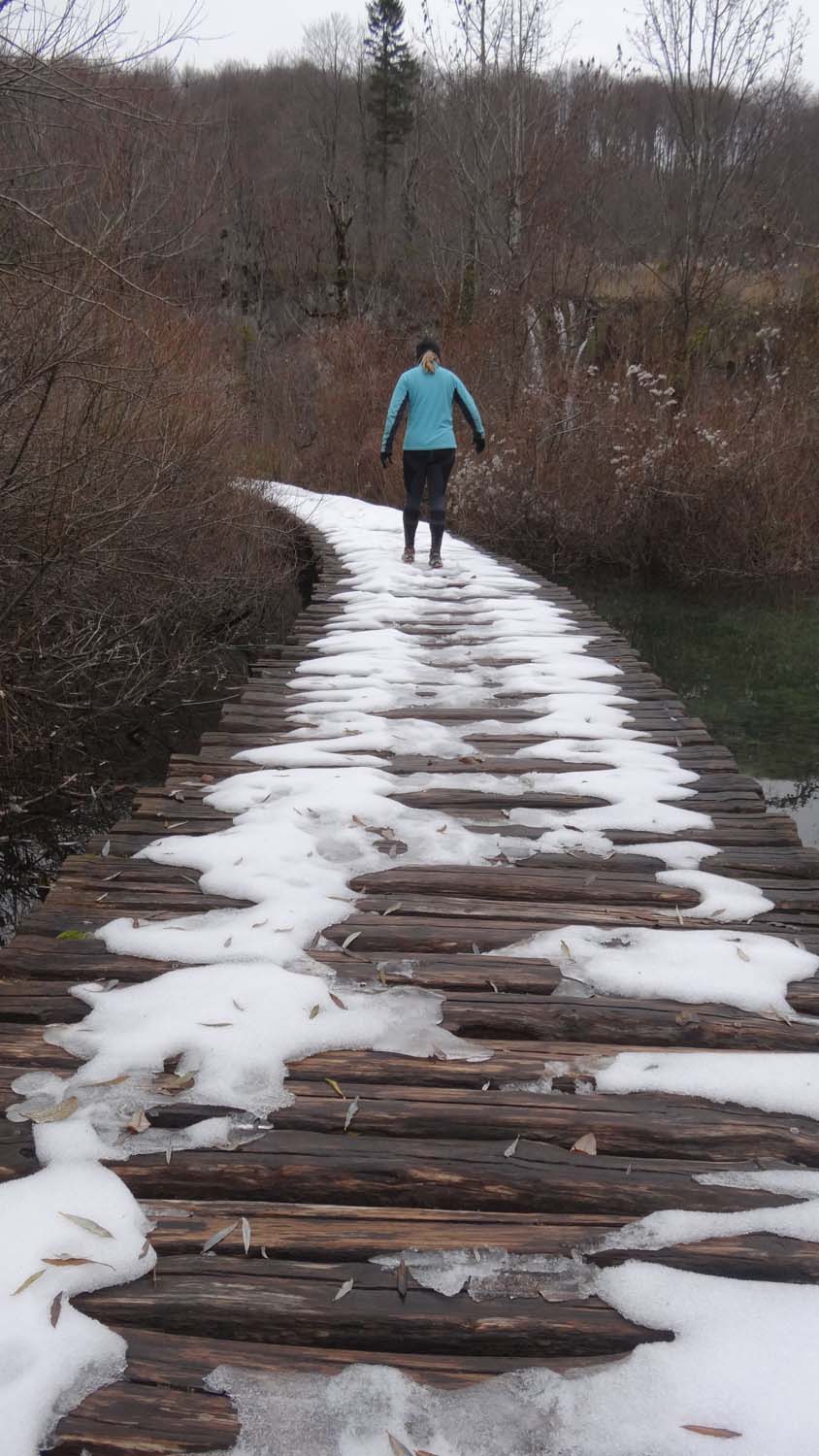 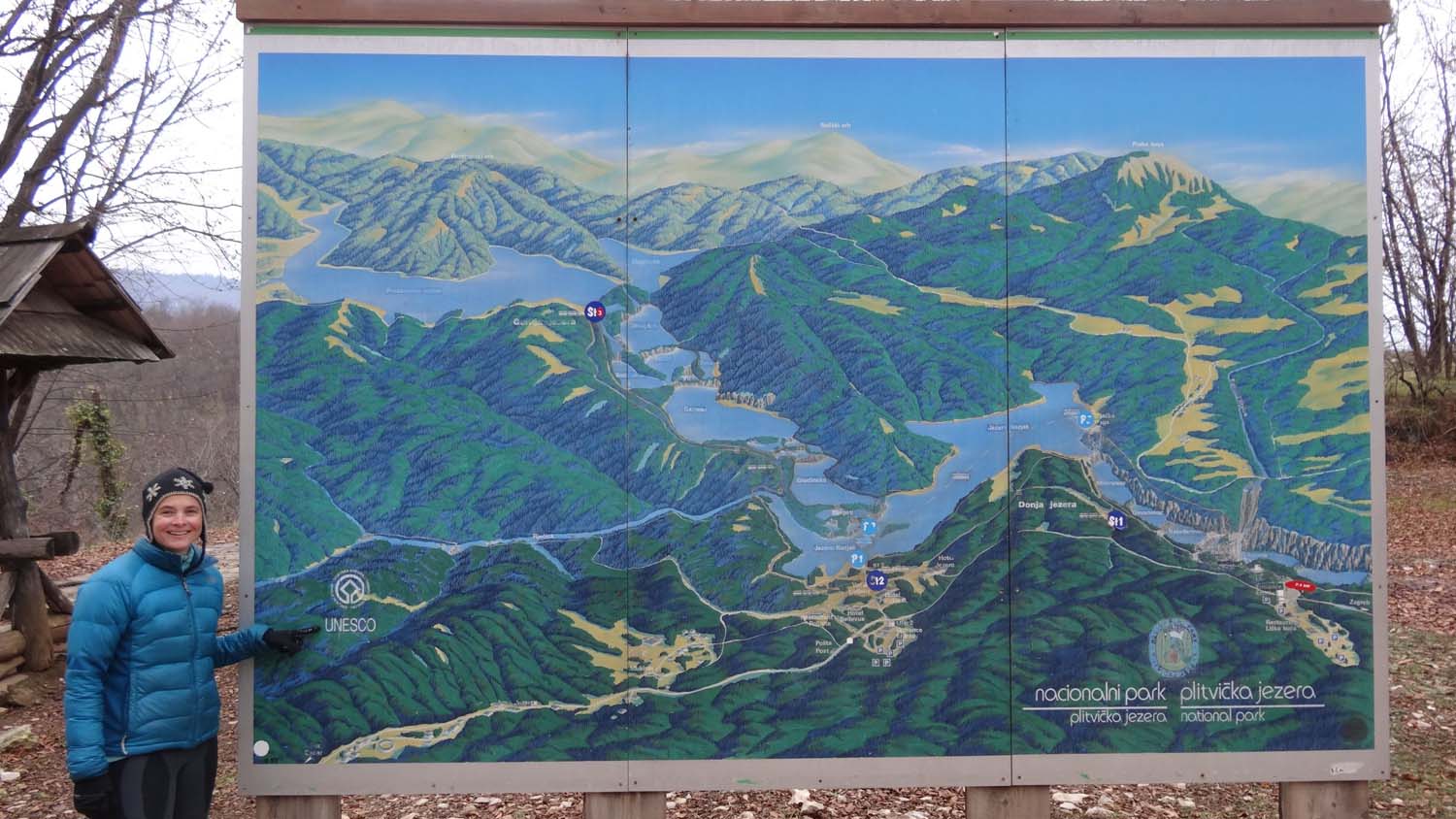 and yes, we tick off another Unesco World Heritage Site…

We had a lovely lunch sitting next to one of the bigger waterfalls, before hiking and jogging around the remaining crystal-clear lakes and exploring the wooden footpaths built across them, before returning to the ‘train’ which turned out to be a truck with seats in the back.

And then it was time to head back to the coast again, to the warmth of the Mediterranean winter sun. We visited the impressive Roman amphitheatre in Pula and found a small Istrian winery to do our first and only wine tasting of the trip. The wines were very good (we can recommend the Teran) and we couldn’t resist buying some even though Lara was looking more and more like Santa’s sleigh and storage space was coming at a premium. But our wine rack still had a few spots available – perfect. 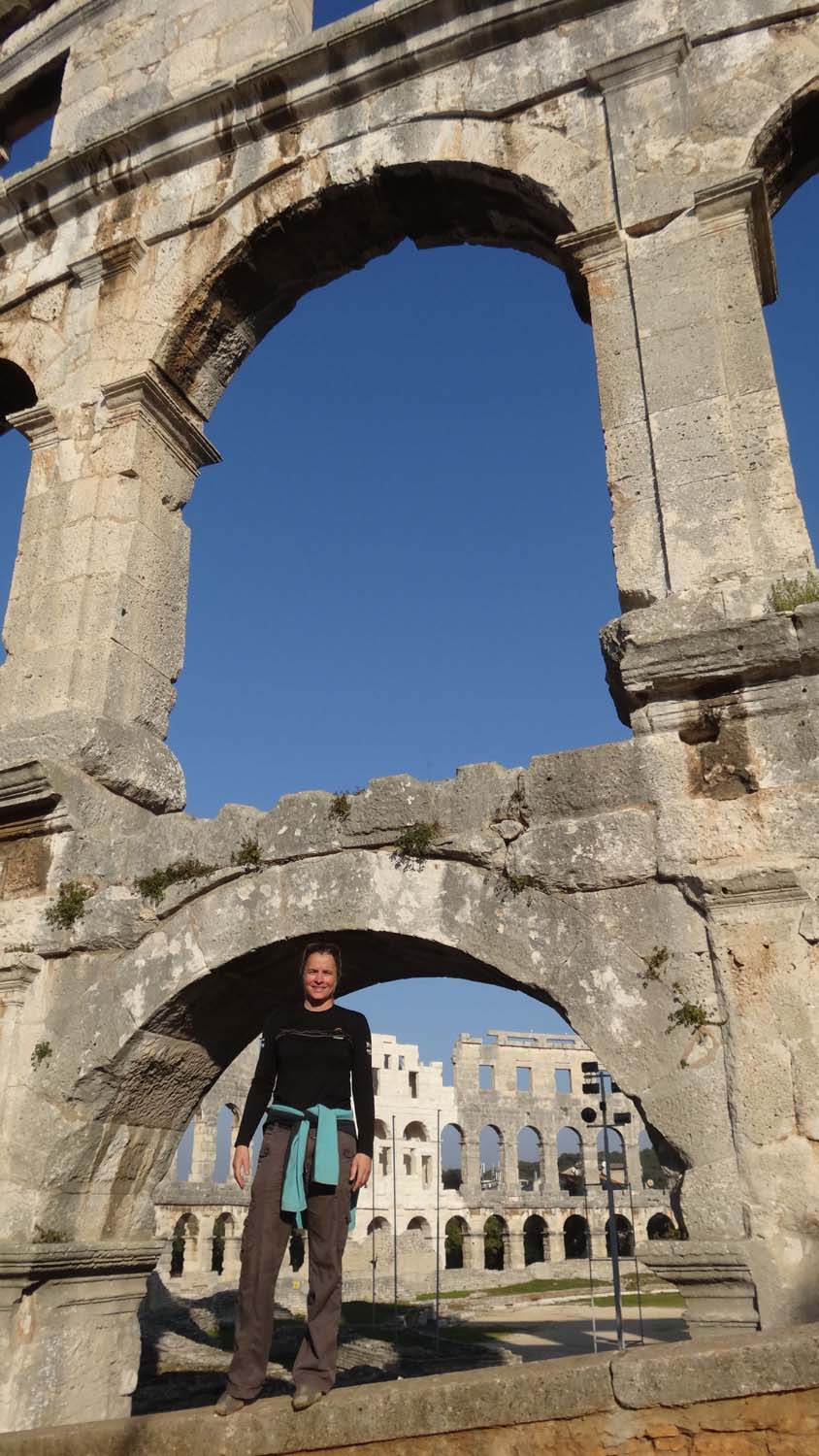 The Pula Arena is a Roman amphitheatre constructed in 27 BC – 68 AD and seated 23.000 people. It is seriously impressive. 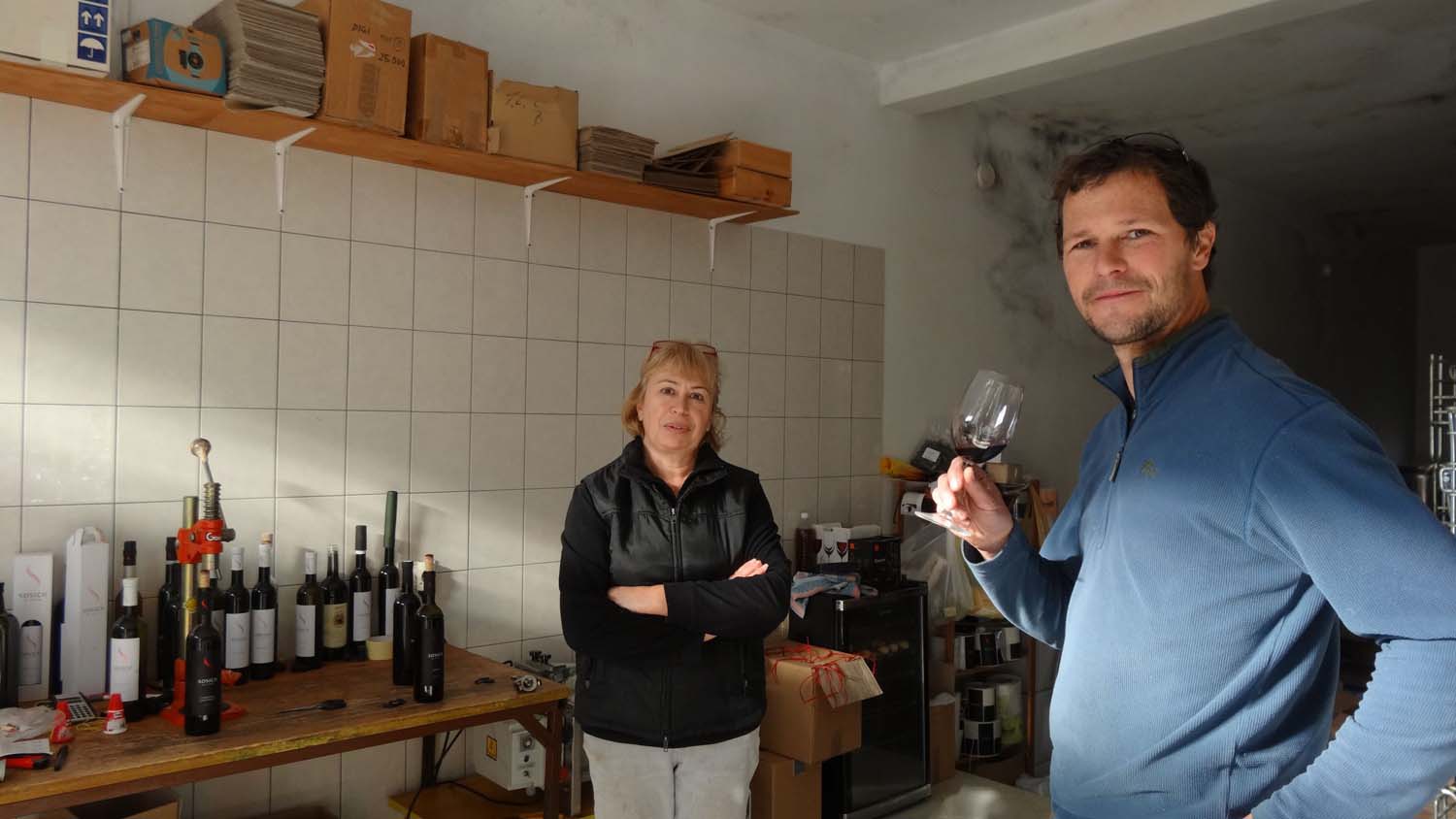 To read about our many adventures with Folke, Astrid, Zorko, Charles, Chocho, Lojze, Petra, Vasja, Milos, Majda, Vojka, Francek, Ida and Veljko in tiny Slovenia, the last country we visited on the Adriatic Coast, you’ll have to wait till the next blog post.