A long time ago, after a trip to Girraween with friends, we drove into Sundown NP on the 4wd track with Mingyuan and Hugh. It was a rainy day and views from the lookout were rather restricted, but it had piqued our interest as we had never before been to this national park. Months later we were supposed to go on a rogaine with Hugh inside Sundown NP, but the rain again played havoc on our plans. This time it wasn’t raining in the national park, but it was raining everywhere else and caused major flooding to houses and roads, and we were actually cut off for a while. 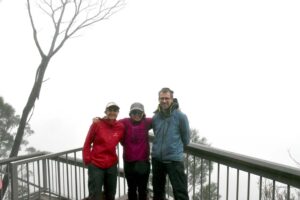 the first time we visited Sundown NP the views were not great….

We came up with a plan to go to Sundown NP and do one of the overnight hikes, third time lucky right? 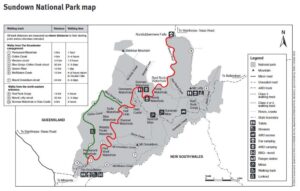 the red line is what we walked (roughly), the green line was our option to go through Blue Gorge

Two options were discussed. Both started at Nundubbermere Falls and ended up in the Broadwater camping area. One followed the Severn River all the way, the other option was to leave the Severn River and hike up the Blue Gorge and then hike out along the escarpment. There was rain forecasted for the second day of our hike and if it rains it is not recommended to head up Blue Gorge. So we were going to play it by ear and see what the river was like, as well as the weather, before making our decision on day 2. 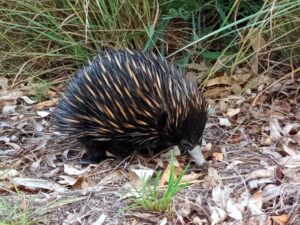 this gorgeous echidna was walking alongside the main road, digging for ants

We arrived just as the sun went down on Friday evening and enjoyed a lovely dinner by the campfire before heading to bed. We didn’t hear Hugh and Mingyuan arrive close to midnight. In the morning we had a leisurely breakfast and prepared for the car shuffle. We drove to the Nundubbermere Falls and left Skinky (our car) there. We found our way down to the river on a short, but steep track and found the river flowing with some beautiful waterfalls. This was going to make it tricky to cross the river when needed. 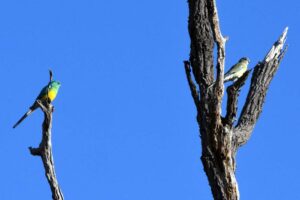 the turquoise parrot, a rare bird that used to be common. A first for us (one of 3 new species that weekend) 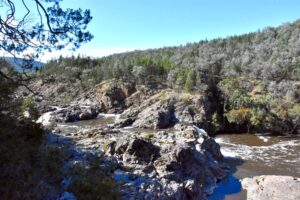 Not long after we started we ran into a cliff on the outside bend of the river, we had to cross the Severn to be able to continue the walk. We walked back a bit and explored an area with some faster flowing, but shallower sections and tried there. Hugh set up a safety rope just in case, but luckily we didn’t need it. We all crossed safely, but it took quite a bit of time. The river was up to the top of our thighs and our poles came in very handy. 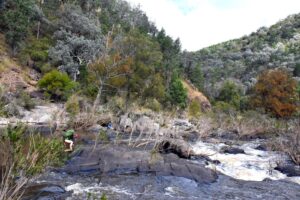 Jude on the first of several river crossings

When it was getting dark we decided to stop. We had just reached the Reedy Waterhole campsite. It’s accessible for 4wd too, but we had the place to ourselves. The night sky was incredible and after a quick, refreshing dip in the river we enjoyed dinner by the fire. 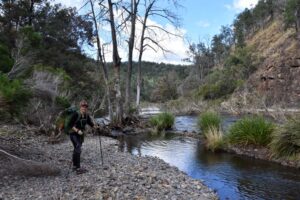 Jude just before she lost her sunnies 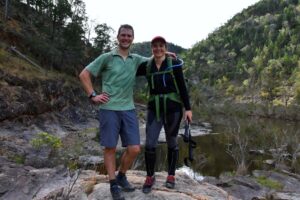 Jon and Jude next to the flowing Severn River 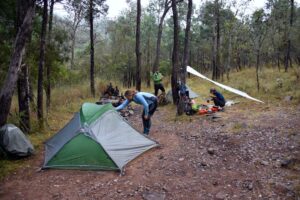 Jude, Hugh and Mingyuan at the Reedy Waterhole campsite, Hugh had set up the tarp in case it rained in the morning

We did hear rain patter on our tents overnight, but when we woke up in the morning it was overcast, but dry. Soon the sun came through and decided to stay with us the rest of the day. When we reached our intended campsite (Burrows Waterhole), we were happy we hadn’t made it that far. It was jam-packed with lots of people as it is accessible by 4wd. We followed the track up and over for a little shortcut and crossed the river twice. Progress was slow, even the ‘easy’ walking over the loose river rocks is only about 2.7km an hour. 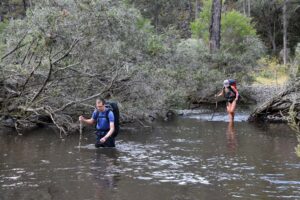 Hugh proudly showing off his awesome footware (crocs from Jon with his orthotics, tied together with some shoelaces) 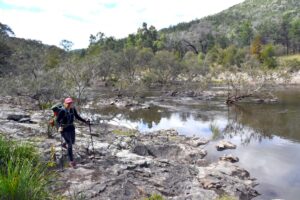 Jude hiking an easy section along the Severn River 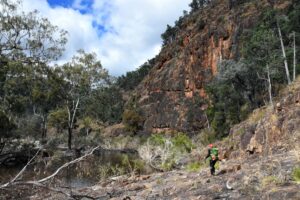 After a tricky section where Jon opted to swim instead of climb up and over the cliff, we decided it was a great spot for lunch and a swim. As Jon had already swum it was just Hugh and Jude who jumped in. As Hugh was coming out, he grabbed hold of a little shrub. That was enough for the tree snake to let itself drop into the water and swim towards Jude, she could just see its little head above the water. 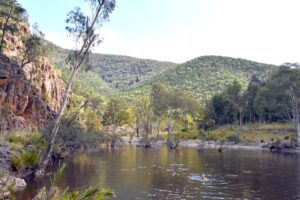 Jude and Hugh swimming at our lunch stop

After lunch we continued the walk until we reached the entry for Blue Gorge. Despite the fact it isn’t raining we don’t take that route as Hugh has been walking in Jon’s crocs for a while now. His brand new leather boots fell apart after the first few hours, the soles completely came off… not the best footwear for Blue Gorge…. 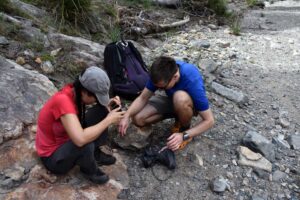 Hugh proudly showing off his awesome footware (crocs from Jon with Hugh’s orthotics, tied together with some shoelaces)

In the final kilometers before we reach our campsite we had to cross the river quite a few times. In the end it was only Jude who still had dry shoes at the crossings and she swapped them out for her crocs just before dark as we crossed the river for the last time. We were so close now and the walking starts of easy over the loose river rocks. But unfortunately, just before we arrive at the start of the actual walking track, we bump into some cliffs again. We pass packs, explore options and manage to clear the last hurdle before we hop onto the easy track for the last kilometer into camp. It’s already 8pm by the time we get back and start dinner and the fire. 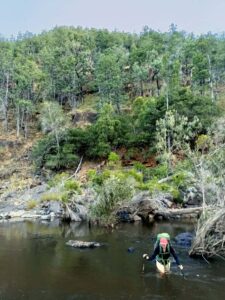 Jude crossing the Severn River again, one of the last times we crossed

It was a tough hike, but stunning. Probably a lot easier when the river isn’t running as you can just cross whenever it gets harder on one of the sides. We’ll be back as we still have the Blue Gorge left to explore there! Who wants to join us?