Jon had to go to Cape Town for work and we decided to use the weekends to explore the area. Landing Friday evening late, we drove straight to our AirBnB in Stellenbosch, arriving just after midnight. The next morning our host had some great tips for exploring the area. He first directed us to a local famers’ market for breakfast, followed by his favourite wineries in the area. We visited Stark-Condé, Haute Cabrière (where they open a bottle of champagne by chopping off the neck of the bottle with a sword!) and Babylonstoren, indulged in some lovely wine tastings and of course took some bottles home! 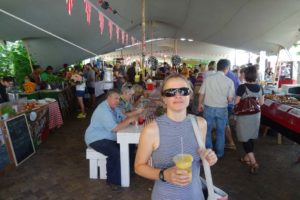 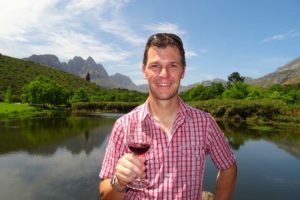 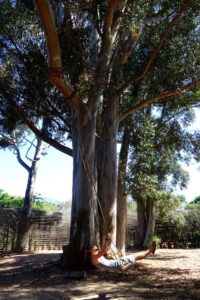 swing in the gardens of Babylonstoren 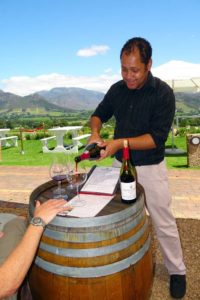 wine tasting at Haute Cabrière – they open champagne bottles by chopping of the neck of the bottle with a sword here!

Our host even helped us make a booking for dinner. We didn’t realise it at first, but the winery where he managed to get us a table for that night is normally booked for up to 6 months in advance for Saturday evenings! Rust & Vrede is one of the oldest wineries in South Africa, dating back to 1694 and its restaurant is rated extremely high. The only reason we were able to get a table on a Saturday night was the national South African rugby team were playing Scotland in the Rugby World Cup that evening… lucky us!

What followed was an extravagant 7 course degustation menu, paired with wines of course. The food was sensational and we loved it! 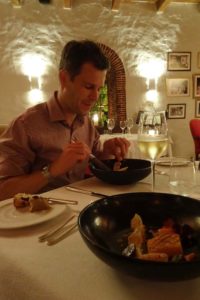 an amazing degustation dinner at Rust and Vrede

The next day we visited more wineries on our way to the coast where we checked out the cute penguin colony which happened to be a 2-minute drive from our next AirBnB. Its location was also perfect as a starting point for a day hike in the Kogelberg Nature Reserve, another World Heritage Site. 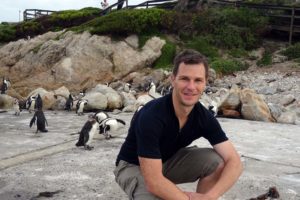 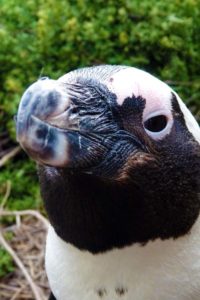 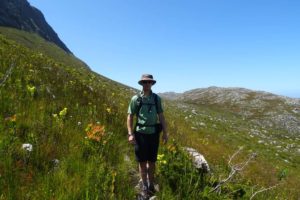 Jon on the hike in the Kogelberg NP 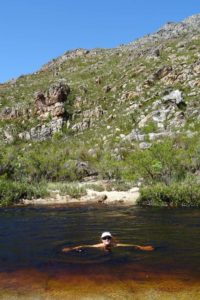 local wildlife in the Kogelberg NP 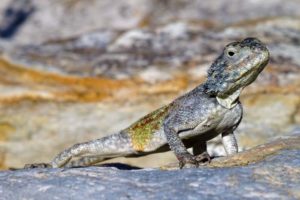 We had to drive to Cape Town that night as Jon’s conference started the next day and we followed the beautiful coastal drive in. We didn’t spot any great whites, but there is a permanent lookout set up to check for them so they can warn beach-goers if they spot something.

The hotel was near the Waterfront area of Cape Town and whilst Jon went to the conference each day, Jude explored the area. Most days Jon was working until late at night, but we did manage to find time to hike up Table Mountain in record-time on a gloriously sunny day with great visibility from the top where we had our lunch. 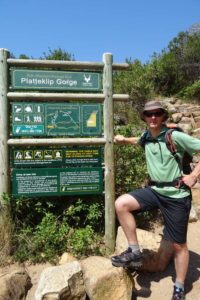 we were going up Plattekop Gorge, it took us 1 hr to get to the top 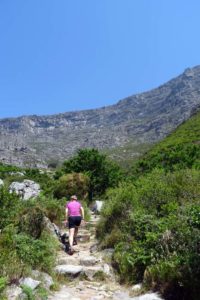 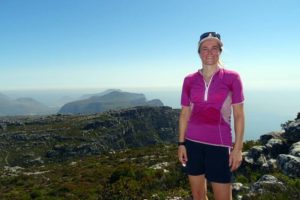 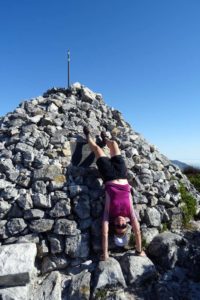 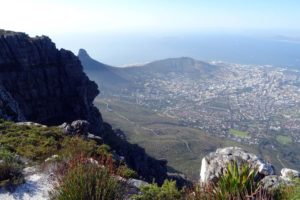 view from the top of Table Mountain

For our last weekend Theresa had organised a little adventure race training weekend. Jude had met Theresa during the Bull of Africa many, many years ago and had kept in touch since then. It was great to catch up after so many years with another crazy adventurous chick!

She had organised everything for the weekend; entry to the race, food, great company and weather, accommodation and even mountain bikes for us! We stayed in a charming cottage and met some of the other adventure racers. The next morning we rode to the start line and after a short race briefing we were off. We chose to first tackle the foot navigation and were soon scrambling through bushland, through narrow gullies and up impressive rocky outcrops. We even found some rock art! The highlight was the beautiful arch and finding a checkpoint when we thought we had missed it… 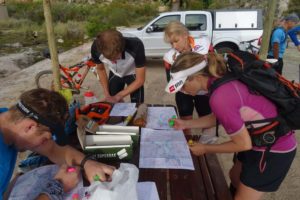 getting ready to go 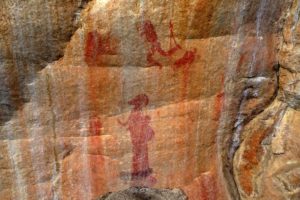 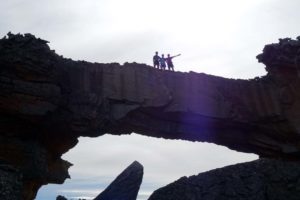 checkpoint on top of the arch!

Our next challenge was on the bike. There were a few options, but we decided to start with the area where we knew there would be single track before finishing with the 4wd tracks and the swim in the dam. The single track was sweet and challenging, the checkpoints all in the right spot and our navigation spot on. The sandy 4wd tracks were much more challenging, especially with the strong headwind on the way to the finish line. 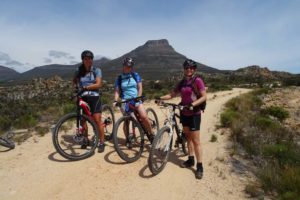 the ladies on the mtb part

More delicious food organised by Theresa followed at night and the next morning we already had to head to the airport for our flight back… It was a short visit to South Africa, but it showed us yet again that it has so much to offer! We’ll be back for sure!